A Night Of Sickness

At 4:20pm EST, it was confirmed my “stop order” was seen soon enough. So both old and new blog stays as is.

A public service announcement: I may have not submitted the “stop order” soon enough to the WP tech to stop the process of importing all of the content and photos of the old blog to this one. She is having to manually correct the format that is occurring when I transferred it a few days ago and then deleted everything.

IF the import goes through and my ‘stop order’ doesn’t — this blog will have about an hour of blank pages during that import. No time estimate on when that might take place today or tonight. If do see that later, I am still here and the blog will return after the process.

Of course if she does stop working on it and leaving the blog as is, starting over with 15 posts, then my warning is what they say in basketball of “no harm no foul”.

I have gone back and forth on what to do with two options.

As they say “sicker than a dog” not a hound, still I was pretty sick last night — my own fault — not the flu but the violent reaction to my intolerance to especially milk and some other dairy products but not all. I really cannot believe I did that again. Enough of that subject.

The hounds hung in there concerned but making sure I was ok all night. We were able to finally get some sleep between 8:15am and 11:15am. They were fed breakfast and those 3 hours were like their normal routine. We woke up to this … beautiful sunny skies and a bright sun. One of those days that is 20° but they say it feels like 13° … still felt warm outside. 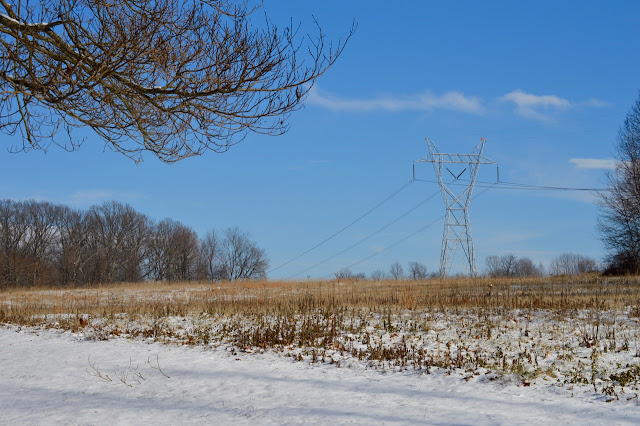 For those that like that old steel bridge I walked over to last May and took photos of, you can see it still standing (no doubts) after the floods from a month ago. You can see the bridge just a little left of center. That one lane road use to be a major country road back in the day, used by many and even today some locals wish it still was. 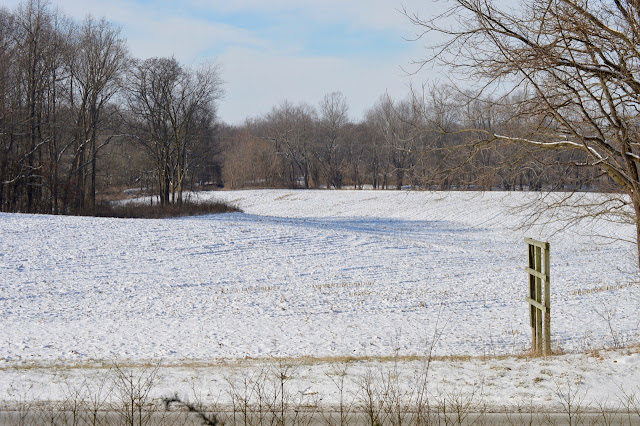 You might be wondering what’s the story about the wooden sign structure but no sign. For over 20 years the local farmer that owns that property had a bright red sign on that structure for the Dairy Queen downtown. I thought the sign came down due to a change in ownership of that Dairy Queen but he later told me he had to take it down by a directive from the State of Indiana. It was on their property.

That reminds me of the question Contessa asked a few days ago in a comment she made. She was wondering if the state snow plows could block my driveway like they do with snow and ice. Yes they can. About ten years ago they rebuilt the highway with new asphalt and actually churned up the old asphalt down to nothing. All the way down the highway they built turnout areas that were paved … in some cases that meant moving mailboxes … yes my mail box.

Since the state still owns 50′ from either the side of the road or the centerline, I can’t remember right now, they were able to move my mailbox without asking. They did poor job of reinstalling it and at times I am still ticked off, when I see it leaning.

I personally dug the hole, set the pole in concrete when I replaced it after a drunk driver ran over it many years back. The state knocked off as much of the concrete they could (I watched them do it) when they pulled the pole out of the ground. They had laid new asphalt for all mailbox turnouts. They put the pole in a hole (no concrete) that was right next to a small concrete culvert. I guess they thought that was all would be needed to keep it straight and braced.

Wrong again. That concrete culvert didn’t come close to doing that, in fact made it worse. Since I haven’t been in the mood in the past ten years to dig a new hole, lay new concrete and reinstall my mailbox, I have used a couple of different fixes. After all I rarely receive any paper mail that is “real mail”, it’s just a deposit box for junk mail. So I decided I had better things to do than dig holes and pour concrete.

This post has gone on longer than I ever expected … sorry for the boring subject.

The only time the hounds went out earlier .. they were in and out just like that. Maybe if I am feeling better this afternoon I will post more of their activity today. 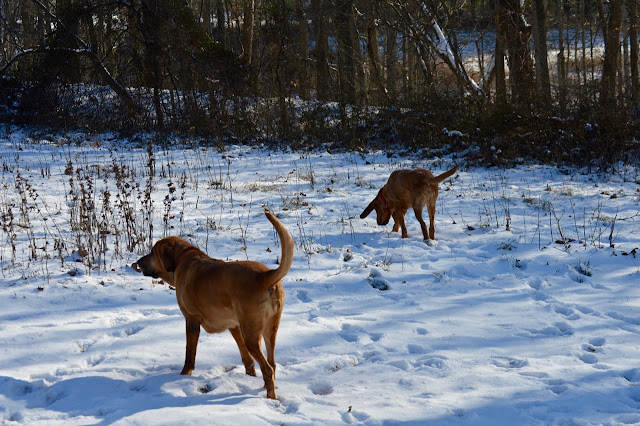 That’s about all from the ‘tropics’ of Southern Indiana today.
By Steve at 3:00 PM