Getting Back To Hounds & RVs 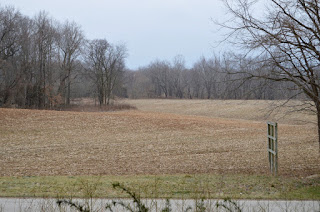 I noticed very late last night after I had deleted all of the blog posts I had transferred from my old Blogger blog, the last 4 out of 5 posts were not about Hounds nor RVs. It was all about the attempted blog transfer, with WP questions/frustrations.

I then wrote on Friday about things in general, while posting some old photos never seen before on the blog. I had nothing else to write about. So I decided it was time to get back to writing about the hounds along with occasional thoughts on RV. Believe me, those traveling thoughts are always with me.

First let me tell you about an outstanding post written by Lynne over at Winnie Views a few days ago. I read it yesterday morning for the first time and it made my eyes wide open. It’s long, detailed, but is loaded with information about what is taking place with the wildlife refuges throughout the USA. It’s news you will not hear on the mainstream media unless there’s something the networks can show to increase their viewership and make money, like the Malheur occupation up in Oregon.

It’s Sunday, where’s my temperatures in the low teens? and that snow storm the snowing has started. Stella’s new wake up time seems to be 5:49am. She will go around poking me with her nose and quiet whining. At that time she is also waking up Sadie and Heidi. She also expects the be fed breakfast after she makes her first trip outside. That is what she is really wanting at 5:49am. It’s the only time of the day that I don’t have to yell for any dogs to “come on” when they are outside. They return to the door on their own. Even Heidi.

Being retired I don’t want to start my day at 6:10am every day. I don’t mind it sometimes, but not every day. So the routine after they come back inside, is to shut off the lights and head back to bed for a little more sleep. Then we will get up and they are fed breakfast. I turn on the computer and make coffee as it boots up.

For the 2nd day in a row it felt much colder than the thermometer was showing, the hounds have not had a real interest in staying outside long. They haven’t played outside for days and sleep inside most of the day.

I forced their hand this morning. After my 1st cup of coffee, with the ground of the field in back finally solid after the snow melted, I not only asked if they wanted to “go for a walk” but also grabbed my trusty Nikon D3200 with the stock 18-55mm (didn’t work again!!) 55-200mm lens. By the way, Sadie and Stella have never said “no” to that question. Sunshine would have been a nice additional feature but we are in a period of gloomy dark skies here in the ‘tropics’ of Southern Indiana.

Just about the time we stepped outside, there were snow flurries but nothing major. With my 20 year old Mountain Hardware goose down parka w/hood I knew we could handle any weather change in the next 20 minutes. 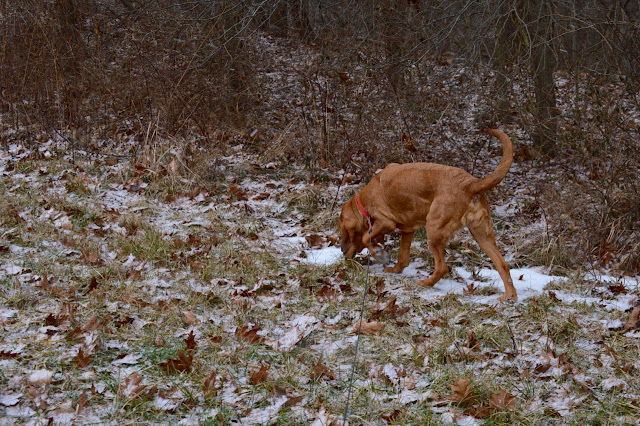 As we walked I had the retractable leash to Stella in one hand and my camera in the other. She was pretty good about stopping each time I focused in to take a photo.

Just to Sadie’s right on the photo above is the route taken by the deer sprinting and jumping over a mashed down fence sprinting flying across that field. When Sadie was younger and the field was full of deep snow – she followed those deer as fast as she could. I couldn’t catch her nor find her later but she came back to the house 5 hours later.

As we made the turn at the halfway point to head home I could see on the horizon the snow as coming down harder but not really a lot of snow. Almost a sideways direction but very small flakes. This storm wasn’t going to amount to much.

There is deer traffic that cross this path on the way home. They come from that tree line you see when we start the walk and then into a small wooded gully in the direction that Stella is facing. Always good to have her on a leash for times just like these, when something has peaked her interest.


It’s was getting a lot colder. I may have worn my down parka but I forgot my gloves. Evidently Sadie was in as much of a hurry to get back inside the house as I was.

Where was Heidi during all of this? … where smart basset hounds choose to stay in weather like this … in bed covered in blankets sleeping. She never snores.

Nothing planned this afternoon but a couple of NFL Playoff games. I cannot imagine any of these games being more exciting than the one last night in Phoenix Arizona. It will be some coffee at times, and a fresh bowl of Cajun Beans have been made along with some cornbread.

Life is good here in the ‘tropics’ of Southern Indiana.
By Steve at 3:00 PM