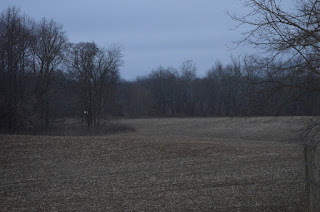 Something wakes me. By the time I get my bearings I realize it's in the middle of the night. I'm guessing between 3am - 4am. The times just 4 days ago I would hear a whine from Winston out in the gated area of the living room. That would wake the other hounds one by one. I'd put my shoes on as fast as I could, grab my coat, prop open the door, get the t-shirt harness and catch Winston on the move to slide it under him.

Now, it really wasn't a whine that woke me. A whine you would do anything to hear again ... even if it were to take place at 3:30am. I almost beg someone or something to hear it again. I lay there in the dark and my mind takes no time to wake up and is going at speeds of an Indy500 car going across the "yard of bricks". An overwhelming feeling of sadness comes over me. Even the word sadness is not a good description, this feeling is worse.

No ... it's different now. That wasn't a whine I heard to go outside. There isn't a reason to rush out of bed and get outside. It's a feeling that makes you wonder how long is this going to keep coming back in the middle of the night.

I reach my arm to the right and feel a sleeping Heidi buried under her two Mexican blankets. I hear Sadie snoring from her stretched out position on the floor, her body half on the floor and half on the dog bed. Stella is so quiet you don't know she is there, rolled into the tightest ball ever, sleeping.

Soon after my thoughts move down the avenue of doubt. Did I do something wrong? Did I give him enough time to heal? Did I misread what I thought were signals from him telling if he was in pain or not? How could this had happened?

Those feelings and questions don't only happen in the darkness of the early morning. They happen at the most unexpected times. Maybe while walking the bloodhounds, realizing you are standing in the middle of the house during the day with no intention of walking anywhere, looking at a photo ... even looking into the eyes of Sadie, Stella and Heidi.

This is only the 3rd day --- it feels like a lifetime. How great would it be if people adapted to life changes as fast as a hound does?

Watching ballgames doesn't help. I can't focus at all, let along finish the book I was reading on December 18. Walking the hounds only delays the next rush of bad feelings. At least the hounds are enjoying it as they deserve to. I thought writing, posting to the blog was helping but really that is also just a delay mechanism.

I took off driving yesterday thinking that a roadtrip of some sort just for a couple of hours would help. Six miles later I make a u-turn and come back home.

Then I remember Winston's last 12 hours ... how he turned down water, sniffed my hand of kibble then looked up at me not eating any of it ... or how he had to lower himself one small step at a time with is front paws to get into the position to lay on his stomach .. how he could barely sit up from that down position ... the yelp ... and his looks at me. I know, as hard as it is to accept ... I made the right decision and in time I will feel better again.

I continue to get blog comments, emails ... more than I ever expected. I look at blog traffic numbers and am surprised again on what has taken place. All the blog comments and emails help me during this time. I know eventually things will get better and I never expected a fast resolution ... but it feels like a lifetime.

It's dark, dreary and rainy here in the "tropics" of Southern Indiana.
By Steve at 7:07 AM

Email ThisBlogThis!Share to TwitterShare to FacebookShare to Pinterest
Labels: Winston