Still Did The Dog Walk

It’s been one of those days no matter how much heat you have turned on inside, you can feel cold, freezing air from somewhere. Once we stepped outside for the afternoon walk around 2pm, it was bone chilling crazy. Heidi almost went. I was really hoping she would back out just because it was too cold for her.

She had been out earlier right after lunch and you can tell by this photo, the concrete floor was too cold for her.

Stella and Sadie went outside but they were not going far … that is until we went for the afternoon walk. I had the Mountain Hardwear Down parka on, with the hood fastened in front of my face with the velcro ends. It was warm. No photos of the walk and it was a good thing I didn’t take my camera.

We were not a 1/3 of the way into the walk when a series of high powered rifles sounds were coming from some property surrounding the field. Sadie stood and stared. Stella laid her ears back and that 25′ retractable leash was maxed out in 2 seconds. She was going to get out of there no matter what. I guess her chances of tracking deer that have been shot are slim and none.

We completed the walk with no problems. Stella finally calmed down the second half of the walk. By the time we finished all of use were freezing and sprinted to the house. Heidi met us by raising her head off the Mexican blanket in the large chair in the living room, where she continued to sleep.

Last night during the Denver/Pittsburg NLF game, I finished a jar of peanut butter. Before I could toss it to Sadie to clean up, Stella grabbed it out of my hand to lick the rest out with her tongue as far as it could go inside the jar. She finally gave it back to me later, so I could rinse out the jar and recycle. At the time the photo was taken she was not letting go of it. Then about the time I took the photo … she moved. 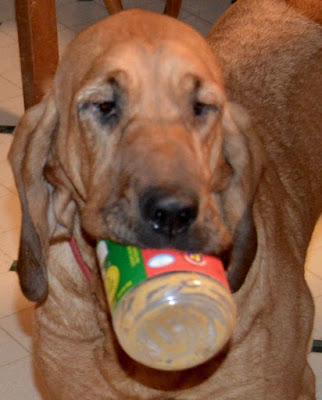 It was a good day here in the ‘tropics’ of Southern Indiana.
By Steve at 3:00 PM