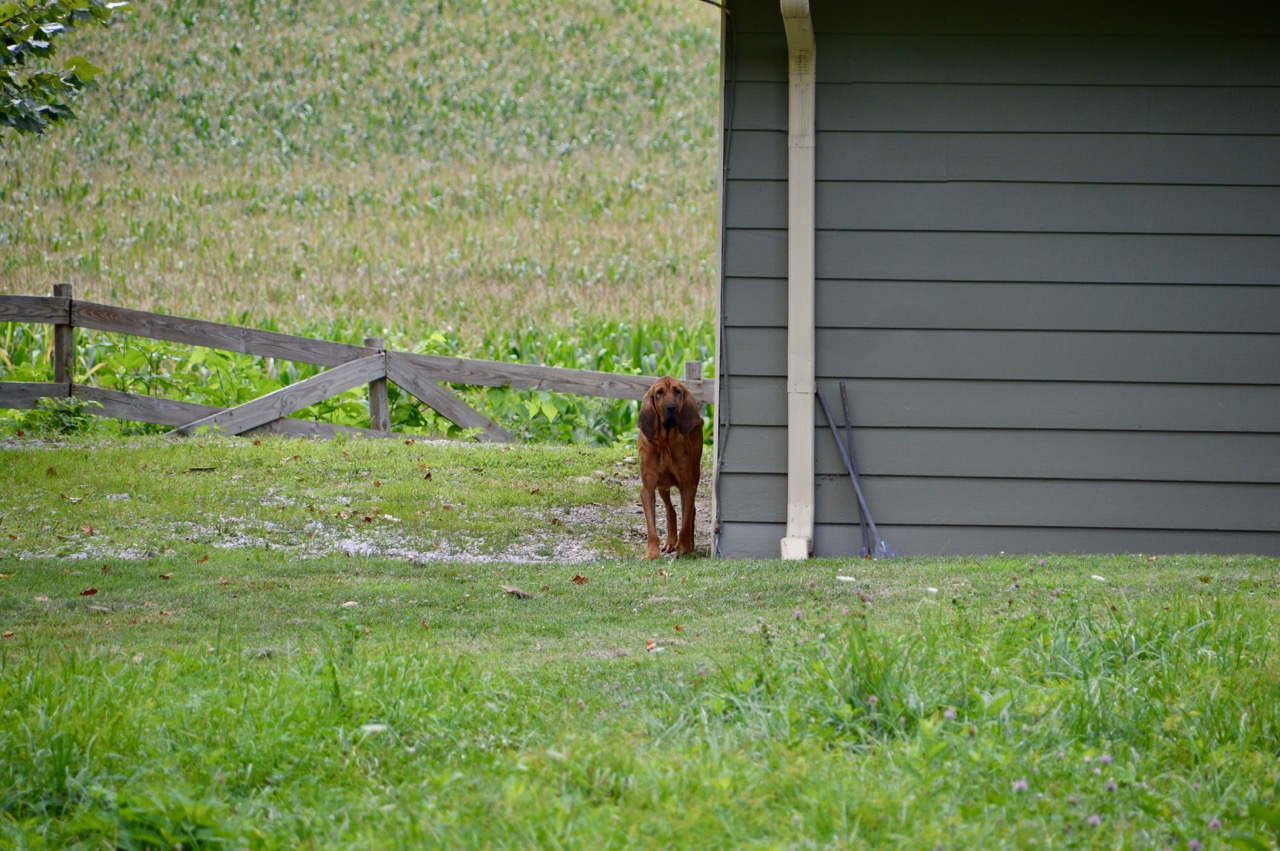 Maybe Stella knew what was going to happen before Sadie and I did because she stood and stared as Sadie and I took off for the 4pm walk. That photo was taken with a 200mm zoom lens so we were fairly far away and I could tell Stella had plans of her own. What I didn't know just what the afternoon walk would bring out.


The afternoon was slow enough that I was able to vacuum and dust the house and wash the few dishes I had left from last night. The rains had stopped, no traffic was stopped in front of the house today and all of the hounds were sleeping so quiet I almost forgot that they were in the house.

With a blast of a passing semi-truck horn, I went to the window to see if a stray dog (only 3 in 20 years) happened to be on or near the highway. I saw no dogs on the highway but I saw what I thought would be the excitement of the day. The owner of the cornfield had an out of state sales rep, based on the front license plate, installing some signage in front of a good corn crop this summer. They want people to know where those seeds came from. I notice they are from a different company than last year. 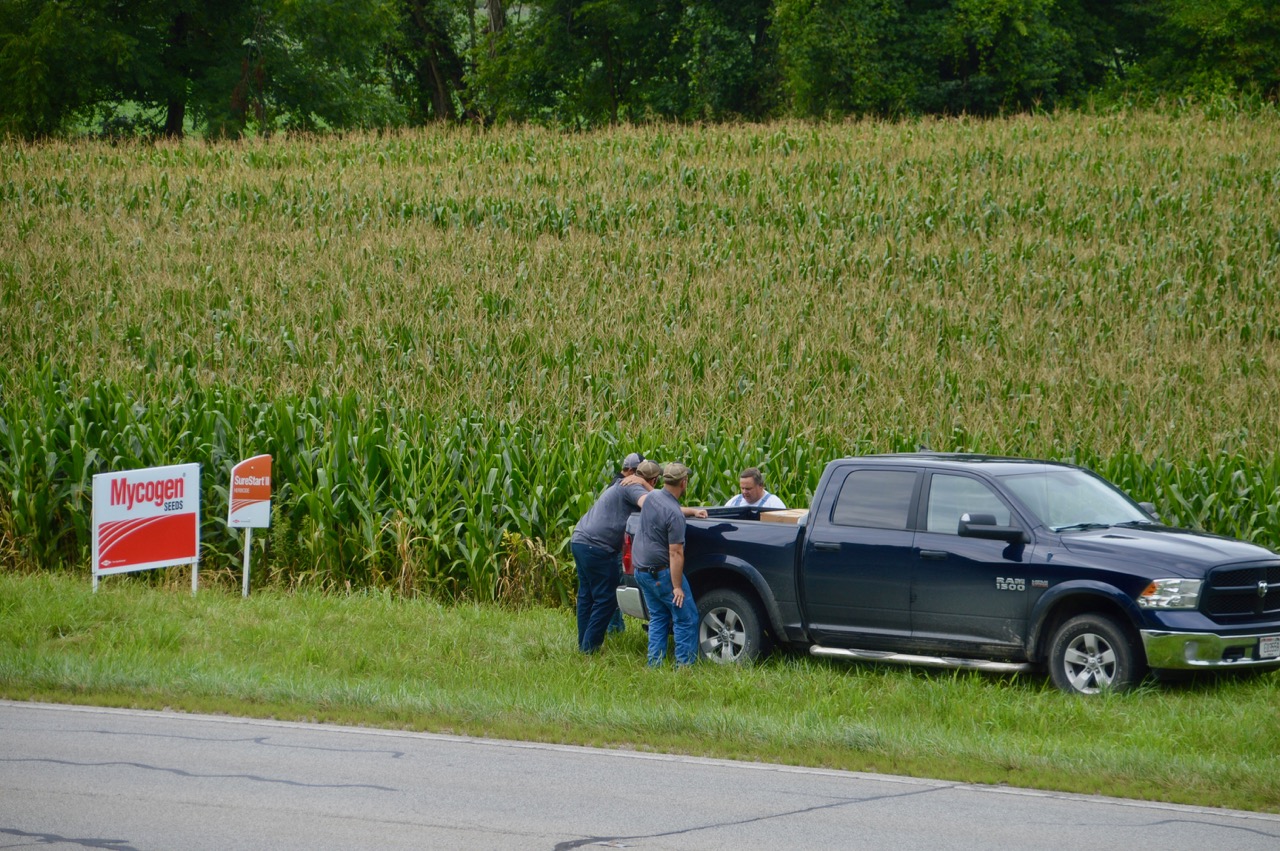 So with the house work finished, the dishes washed, I poured a tall glass of ice cold water and sat down to see how many more games of Mahjong I could complete under 4 minutes. Based on the way the weather looked this morning I found it hard to believe I was seeing the reflection of the sunshine outside the large window I look through from the kitchen table laptop computer. It was time for an afternoon walk with the hounds. 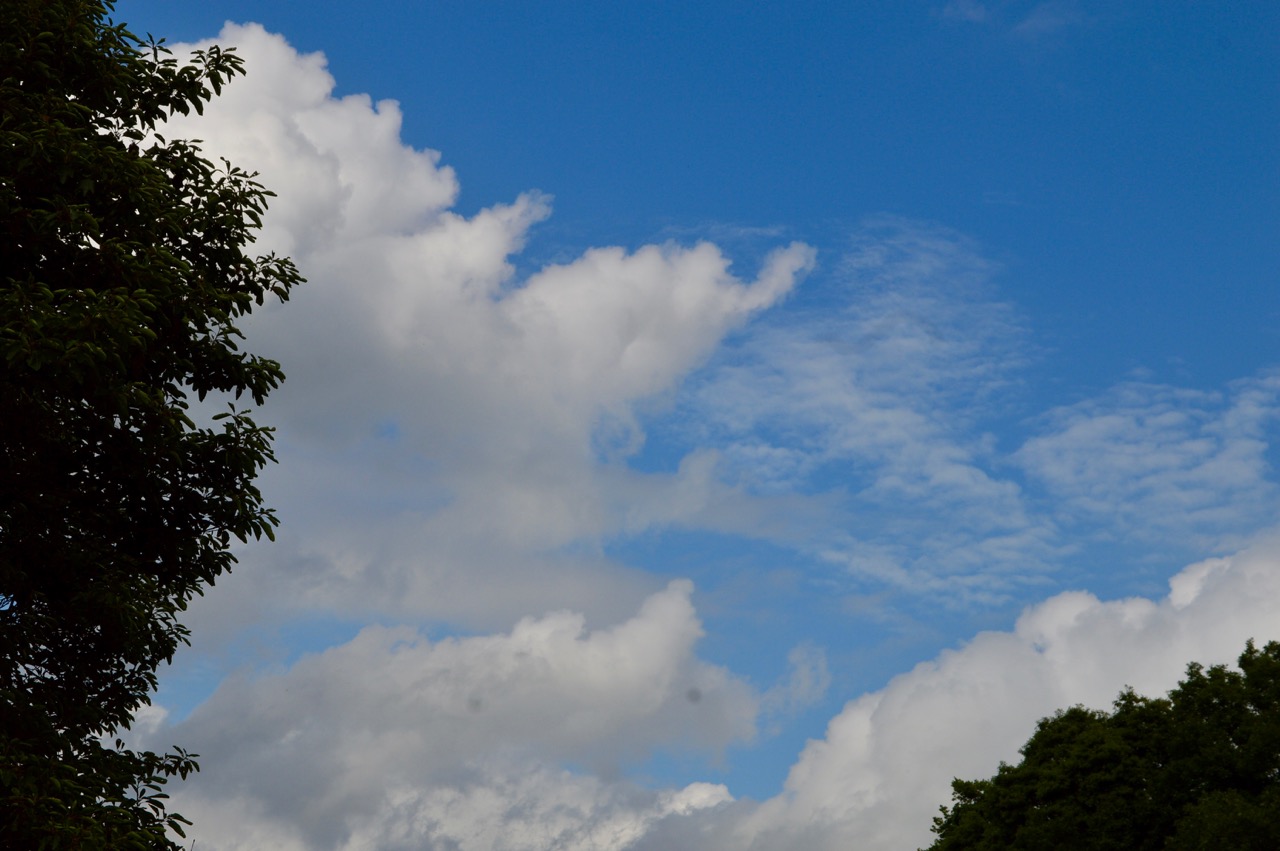 The skies looked great toward the NE, humidity was low and the field dry. Toward the NW was an entirely different looking sky. That is when I found out that Stella was going to have her own plans on where she was going while Sadie and I followed our normal path. 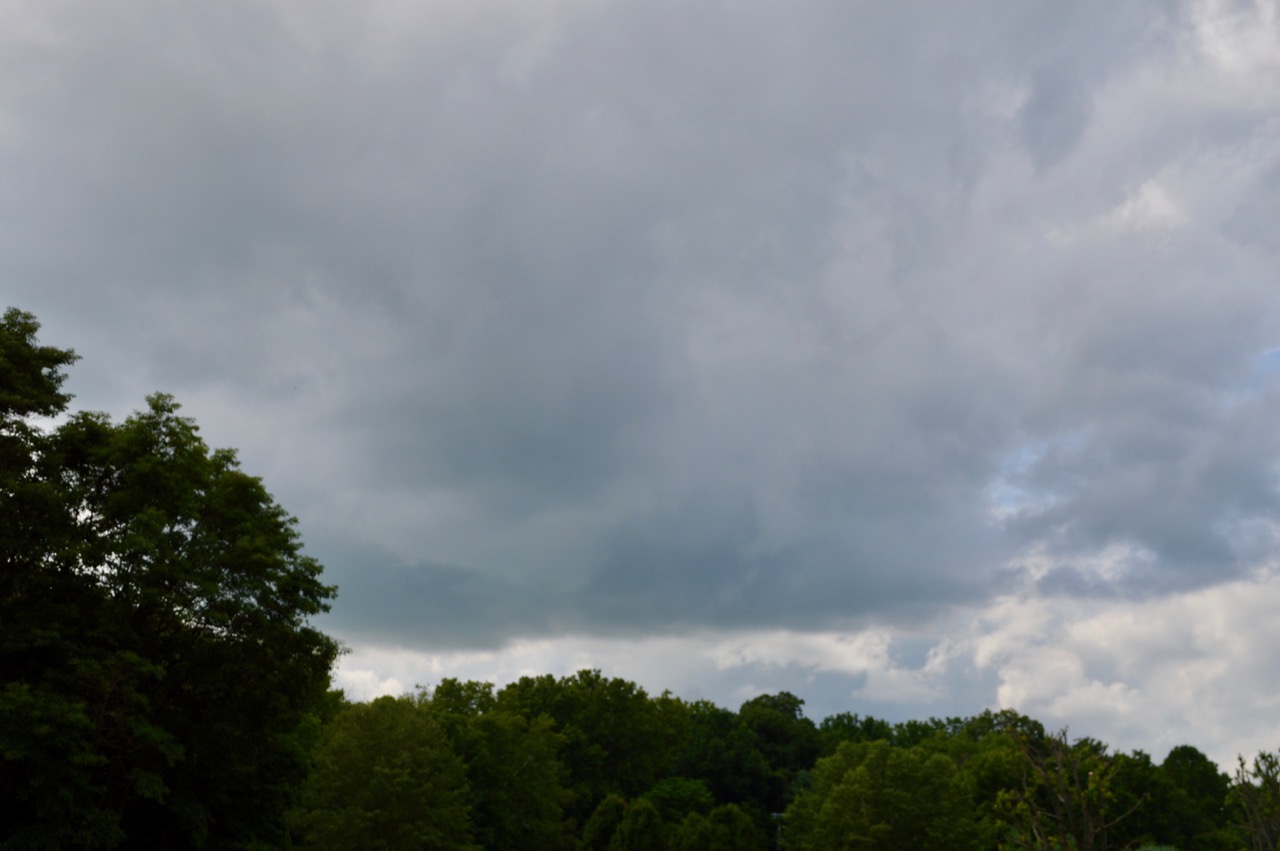 Through my zoomed lens I saw Stella rise out of the growing wild flowers and field grass, walking out the north side of the yard. I suspected we would see her on the way back over by the neighbor's woods. Yet, she surprised me once again and came our direction on her own time without me calling her name. 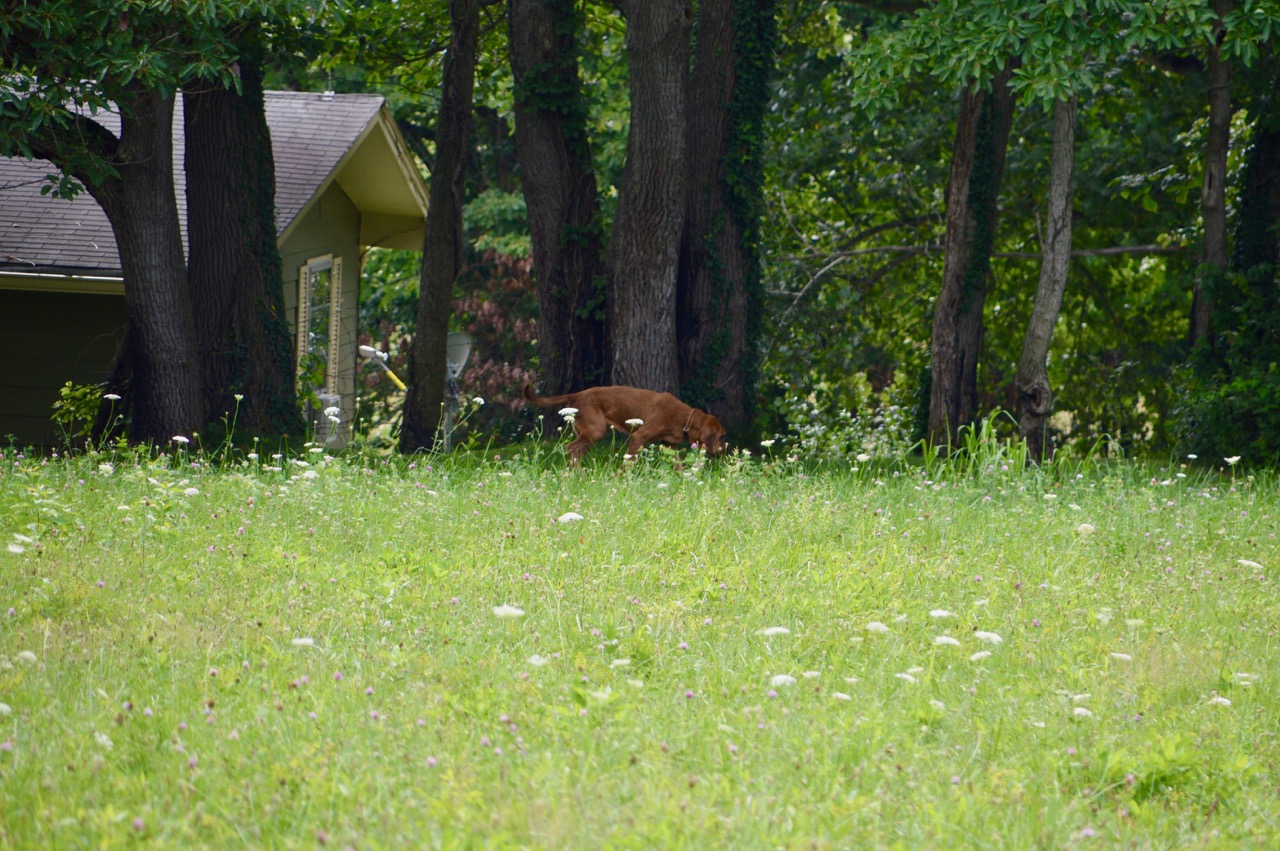 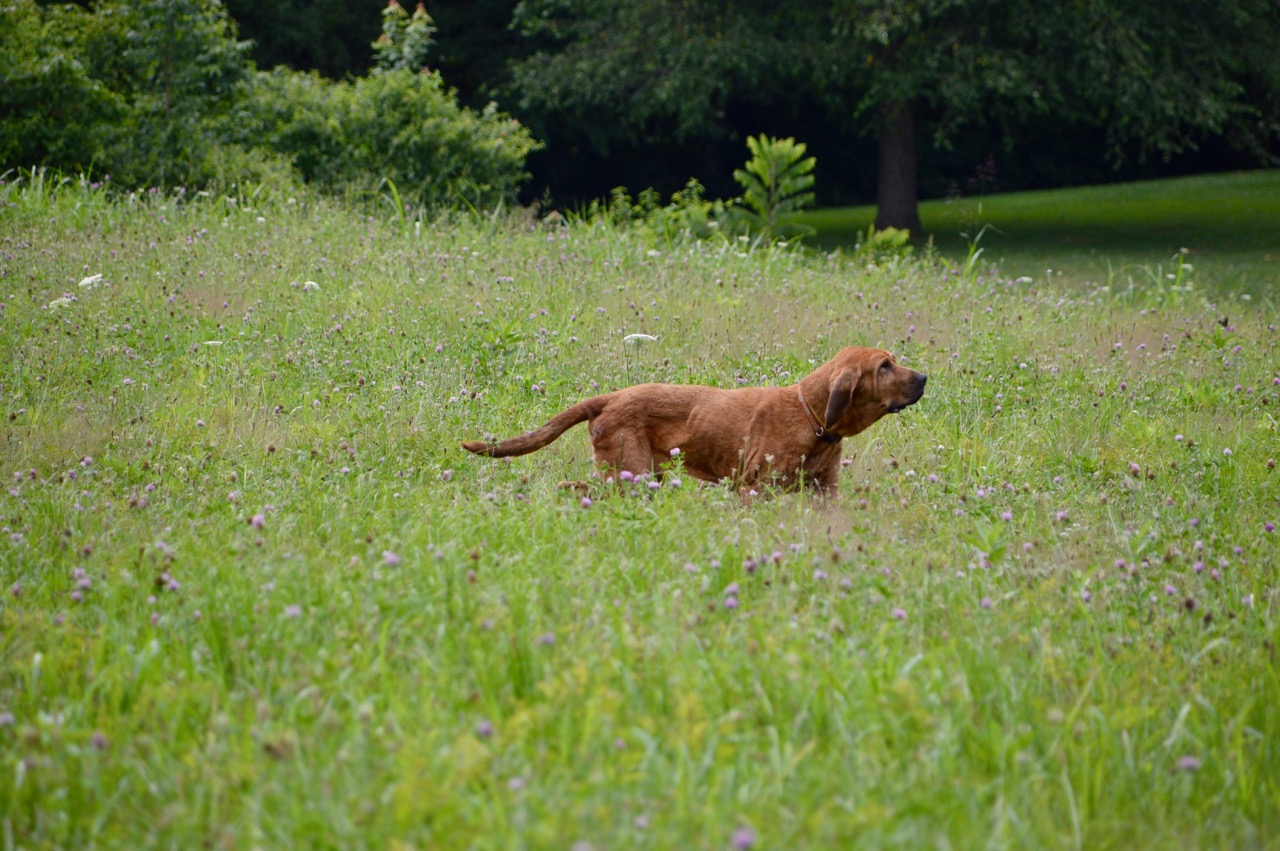 What I did notice fairly quickly on this walk, there were more butterflies than I had ever seen at one time. They were everywhere in the field and for some reason Sadie was not chasing them as she likes to do most of the time when they fly over her head or nose. She had other plans and left the butterflies alone but that did not mean they didn't bother her.

Each photo, sharp or blurry, is of a different butterfly. 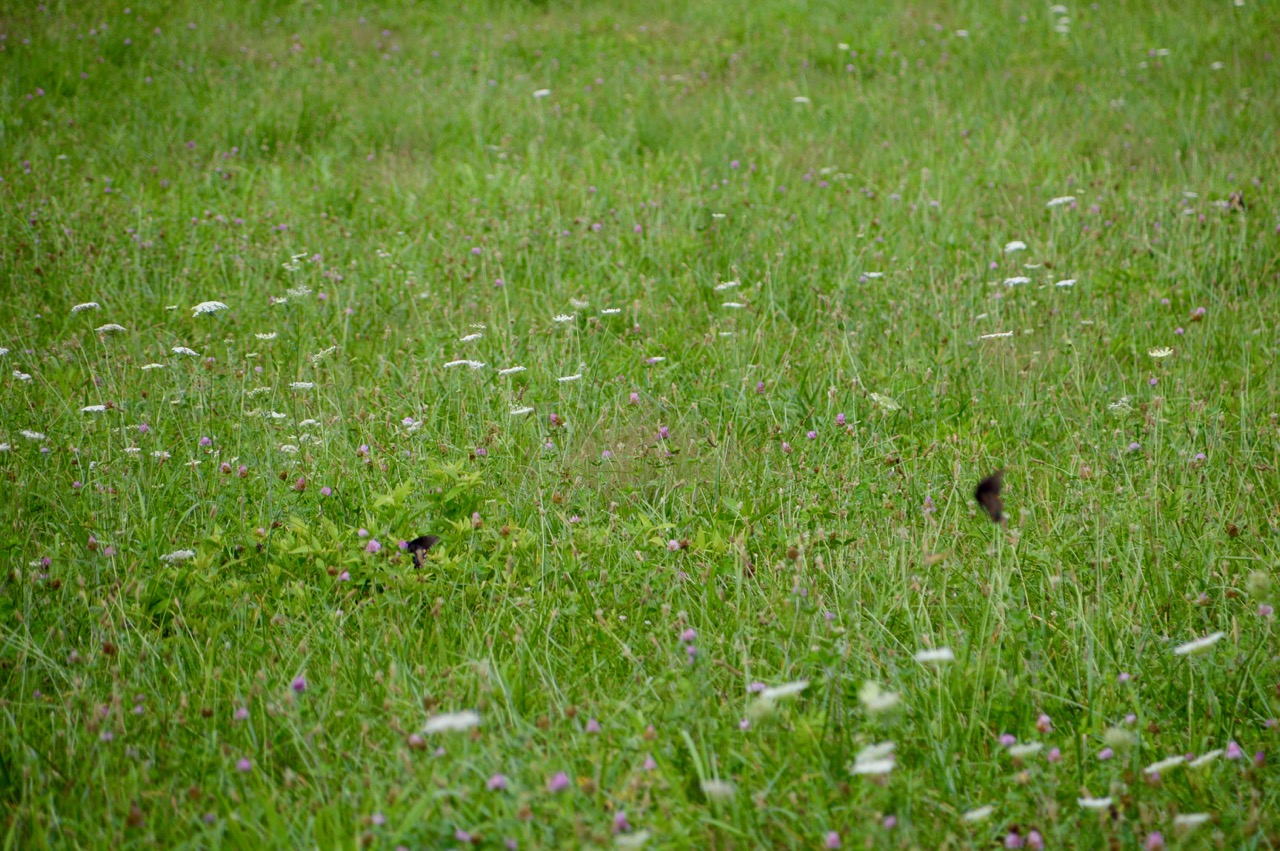 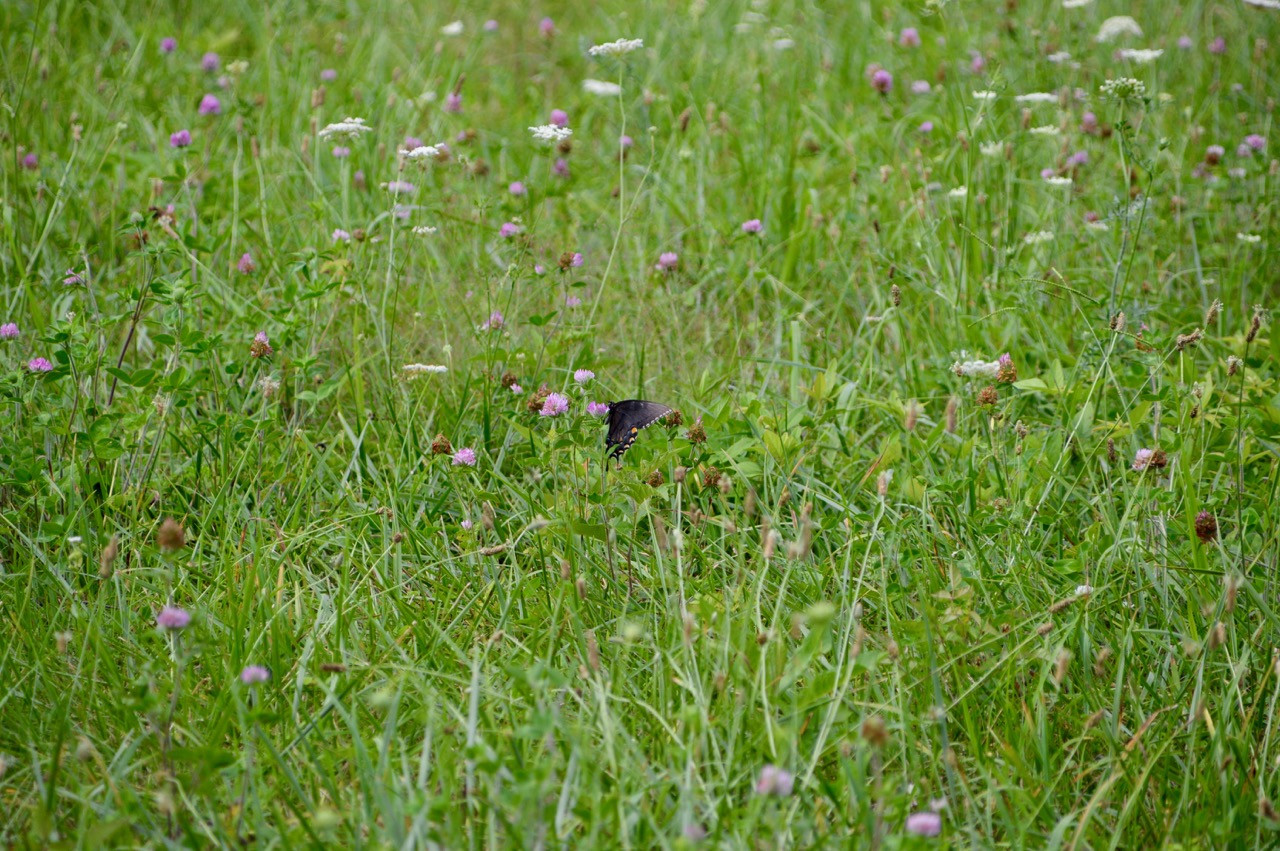 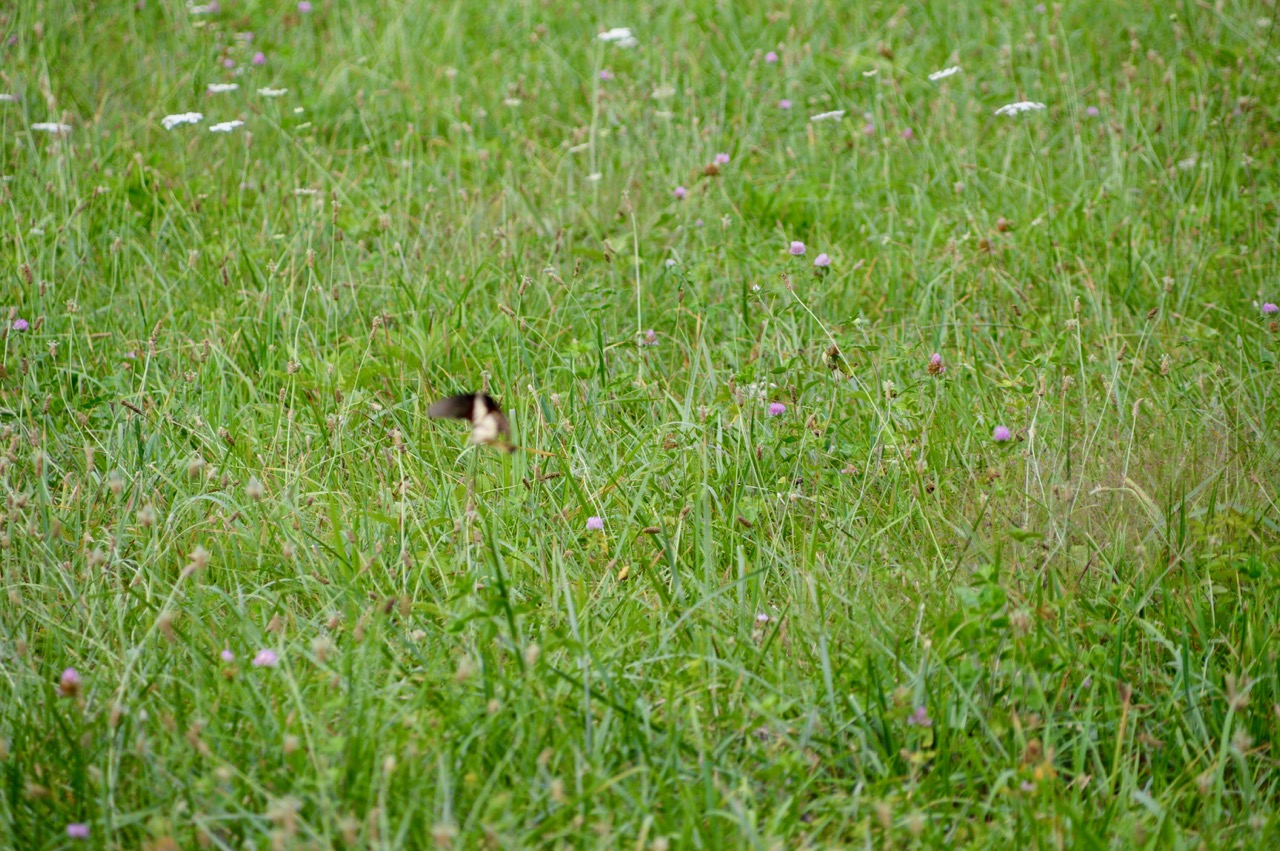 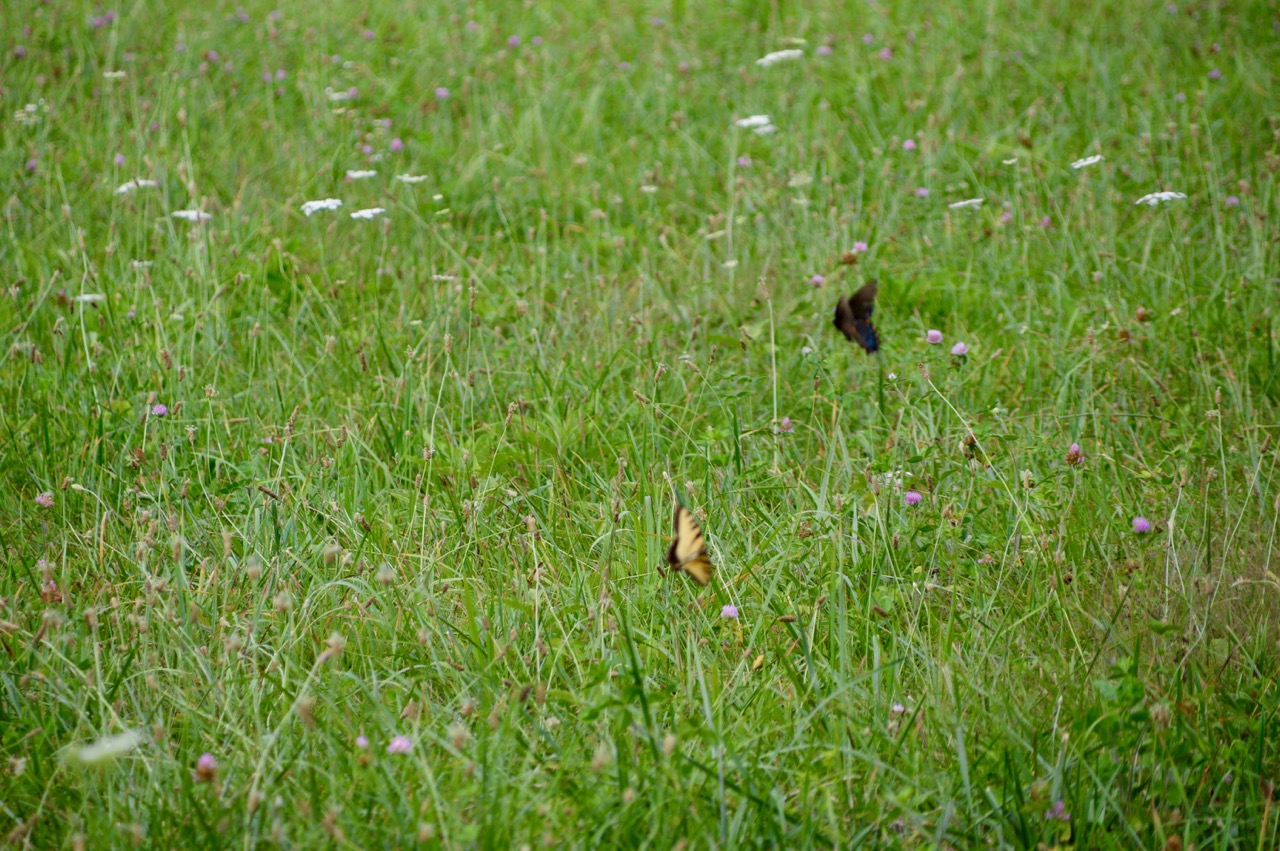 There were so many that I was trying to catch with my camera I forgot all about Sadie and Stella until I felt that wet mouth and moist nose of Stella's touch the side of my knee. She nudged me to let me know she is around. At times inside the house she will do that to my face to let me know she likes me or wants something to eat. Bertha, my first bloodhound, use to show me that by putting my left ear in her mouth without a lick. 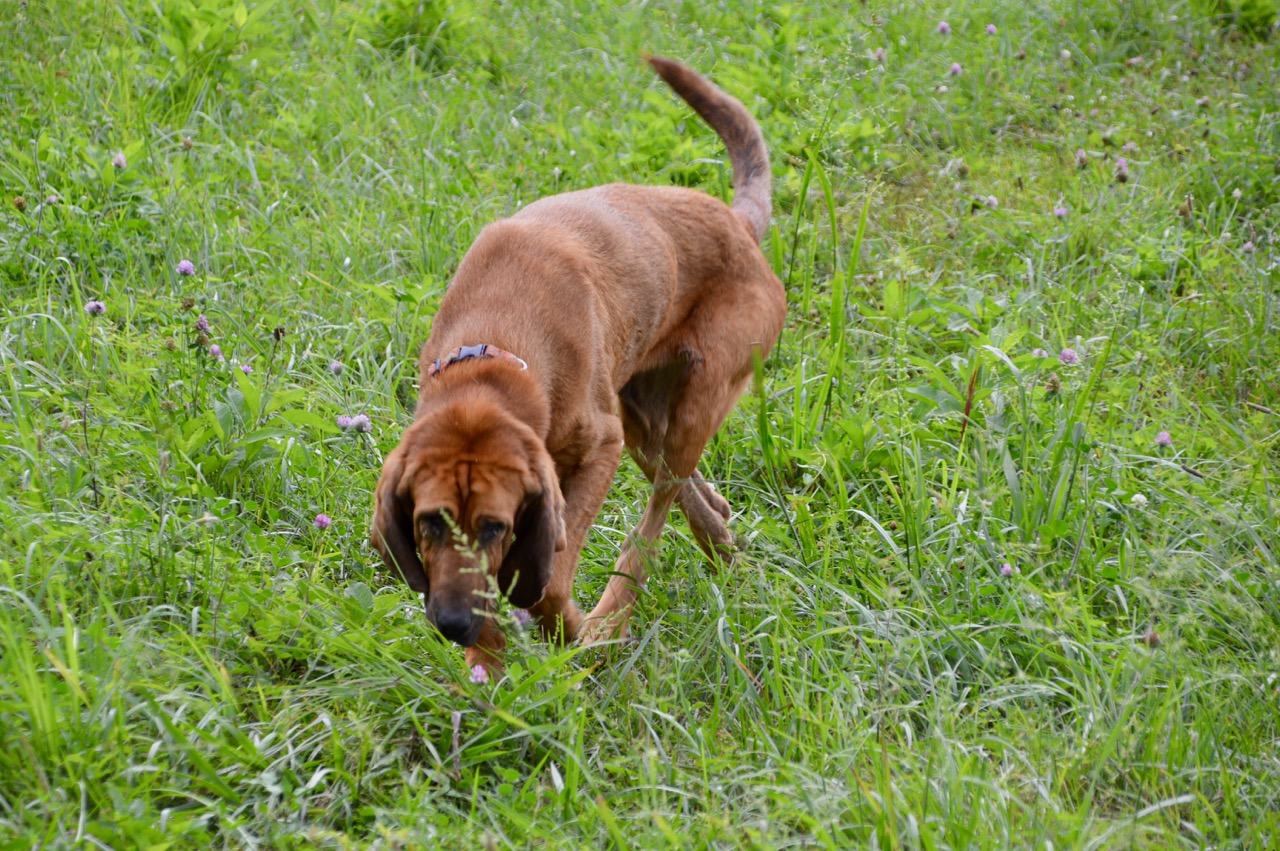 Both hounds took their time and both were slow in their walk this afternoon, almost like a stroll. There wasn't any intense searching and identifying by Sadie nor was Stella looking for and eating deer scat ... just strolling through the growing field of wild flowers and being swarmed by butterflies. 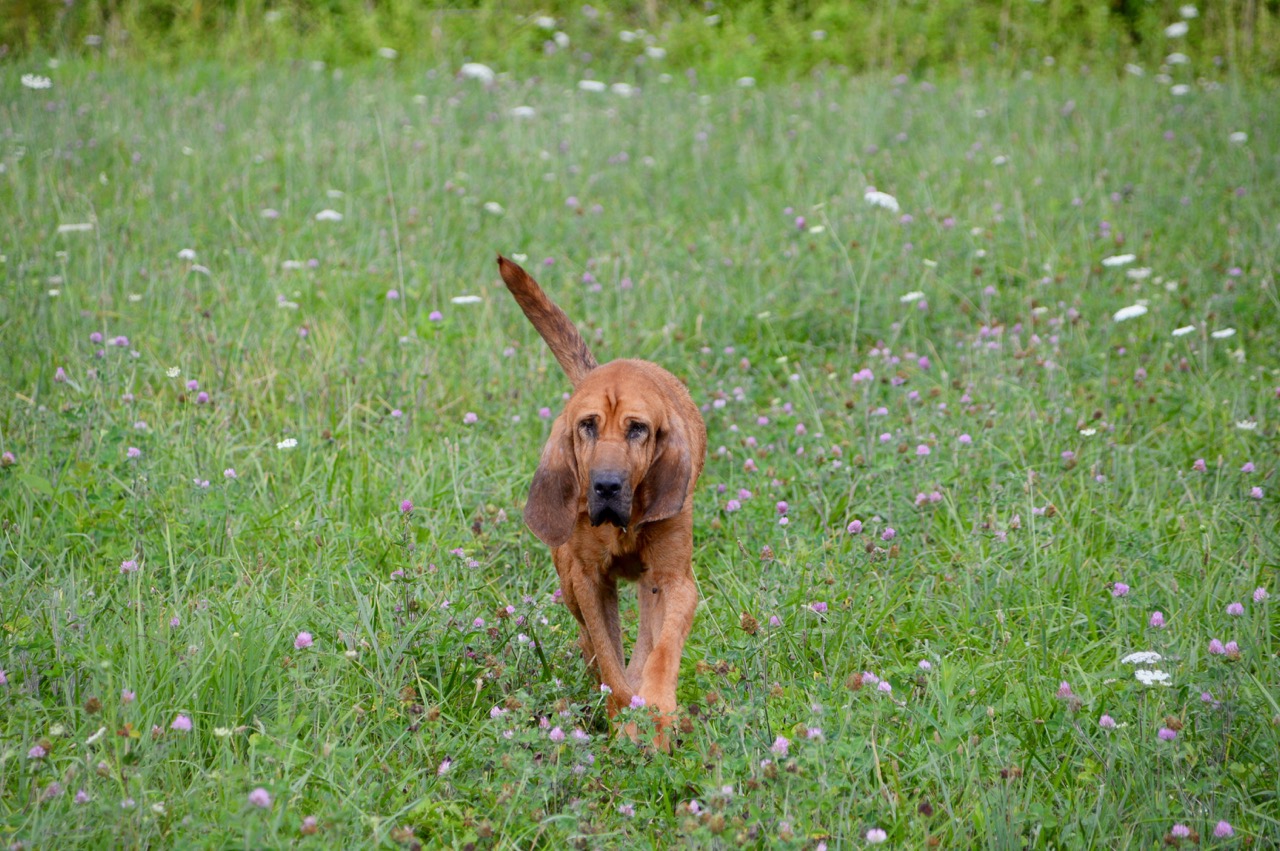 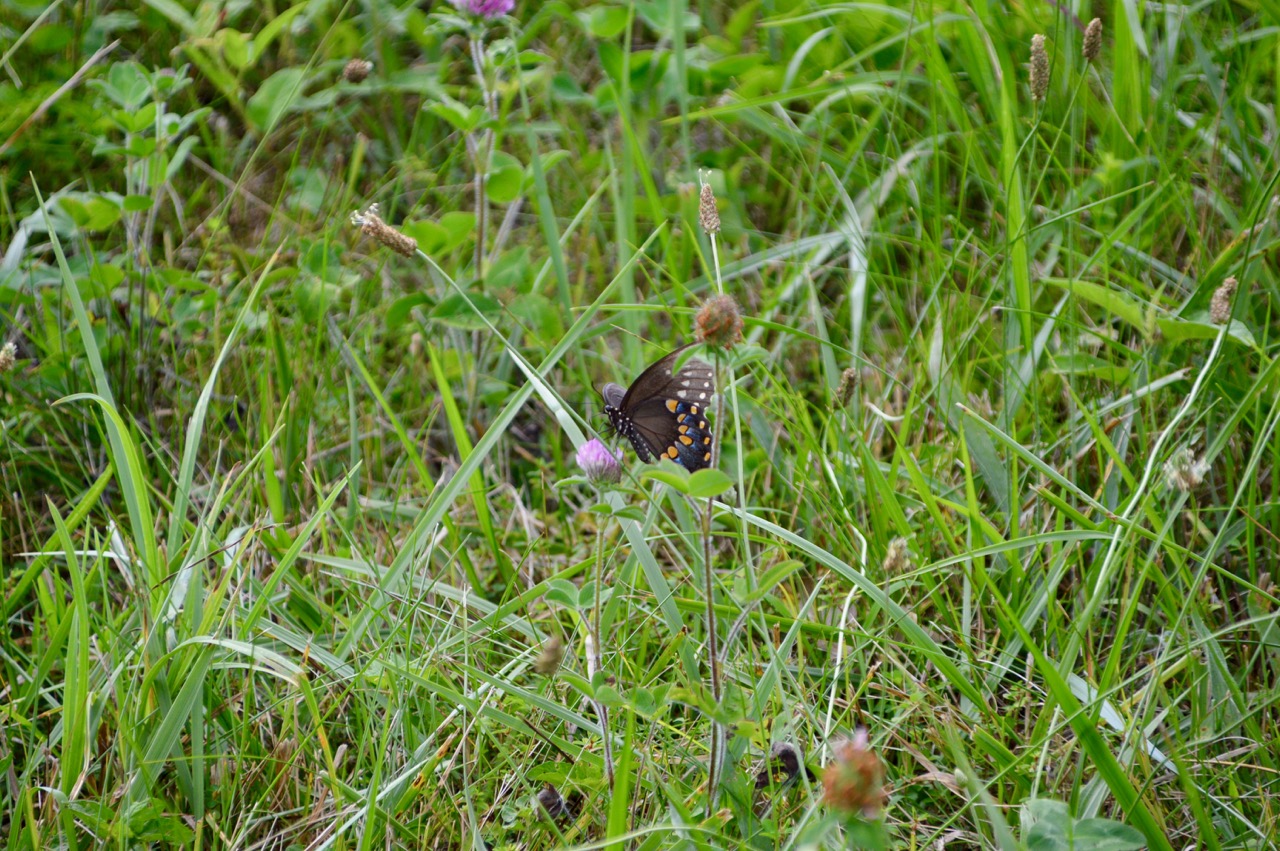 Remember that each picture is of a different butterfly. 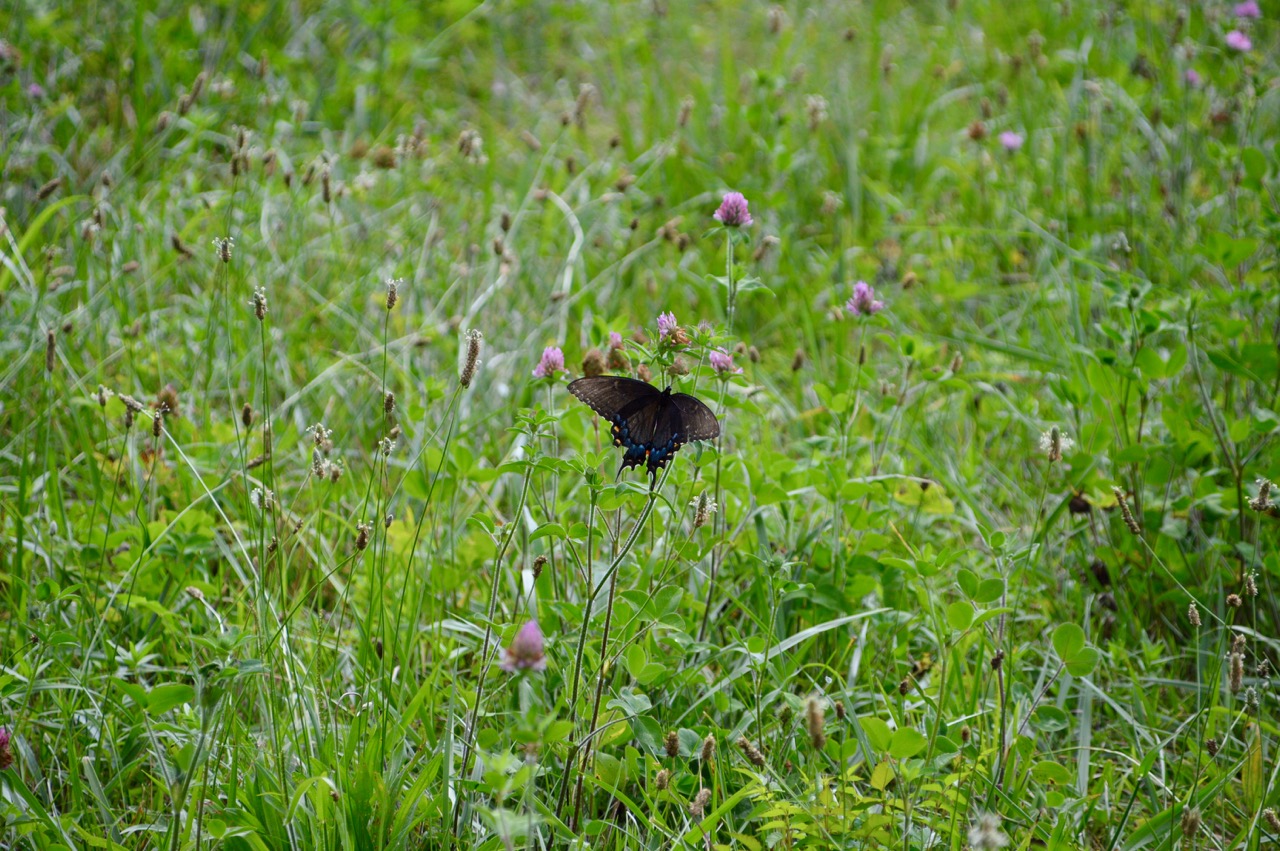 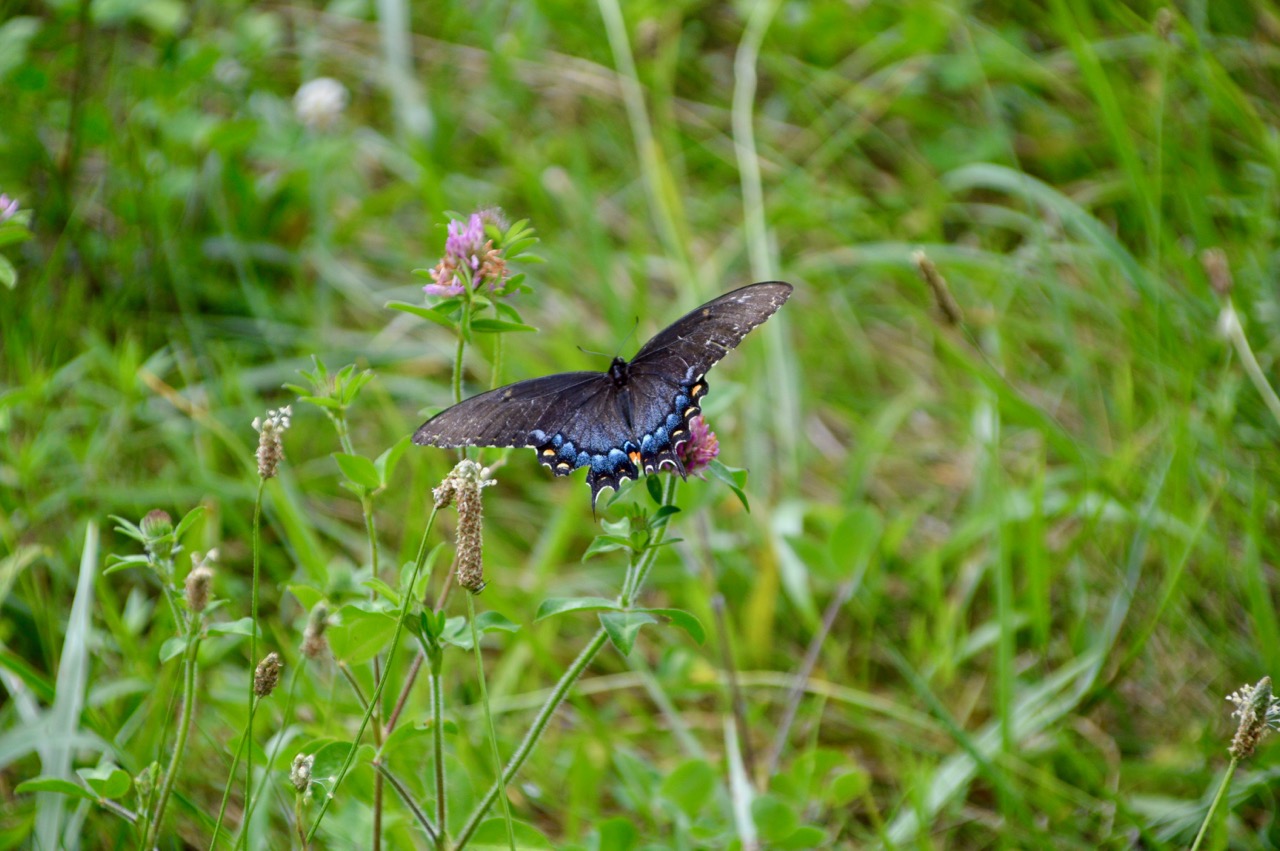 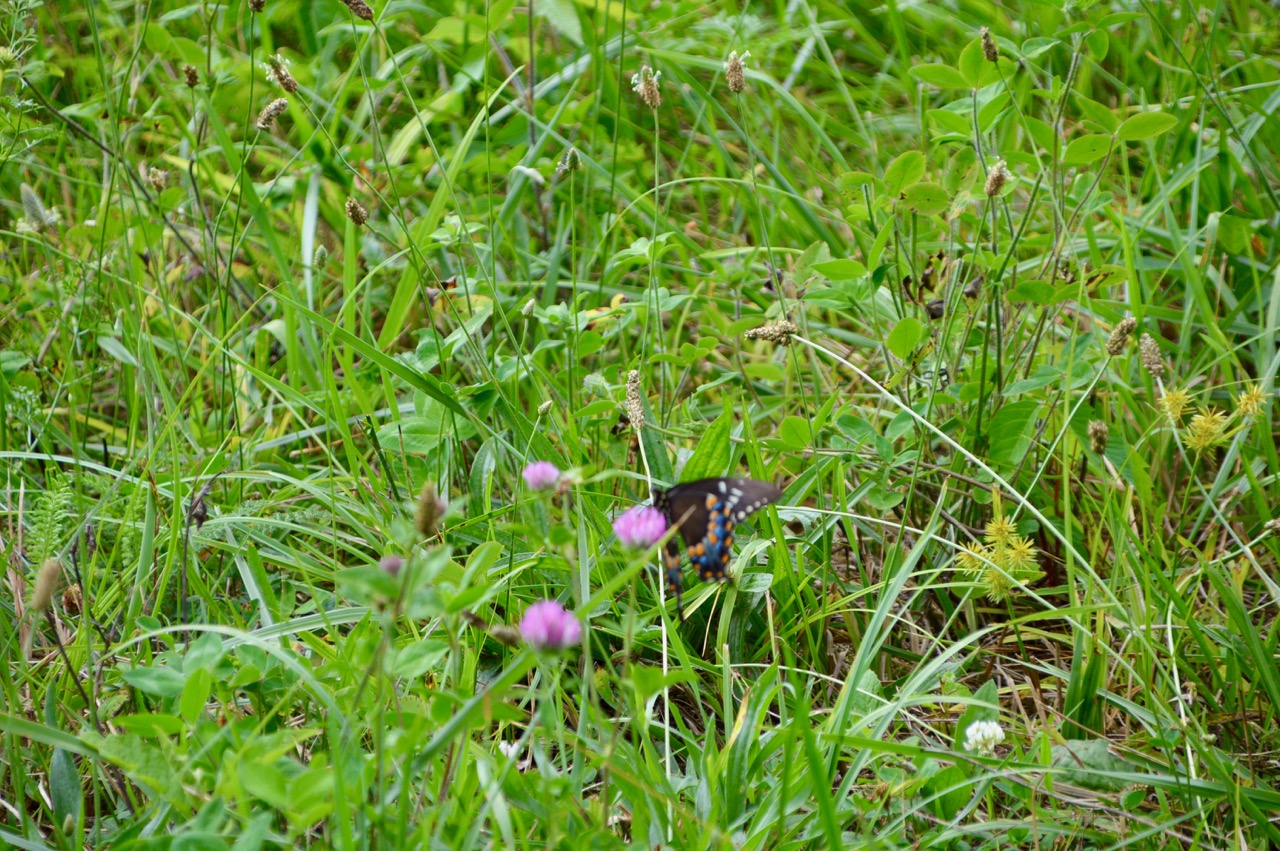 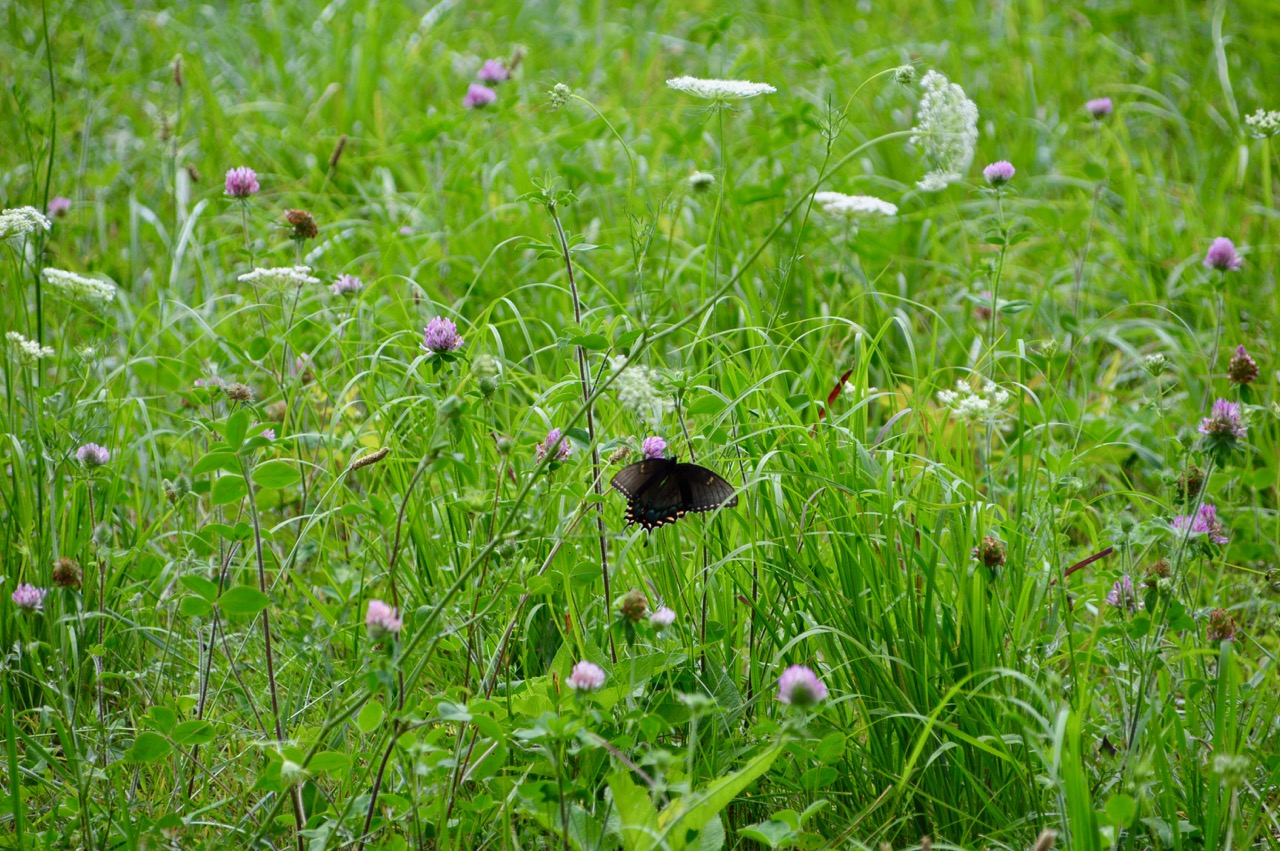 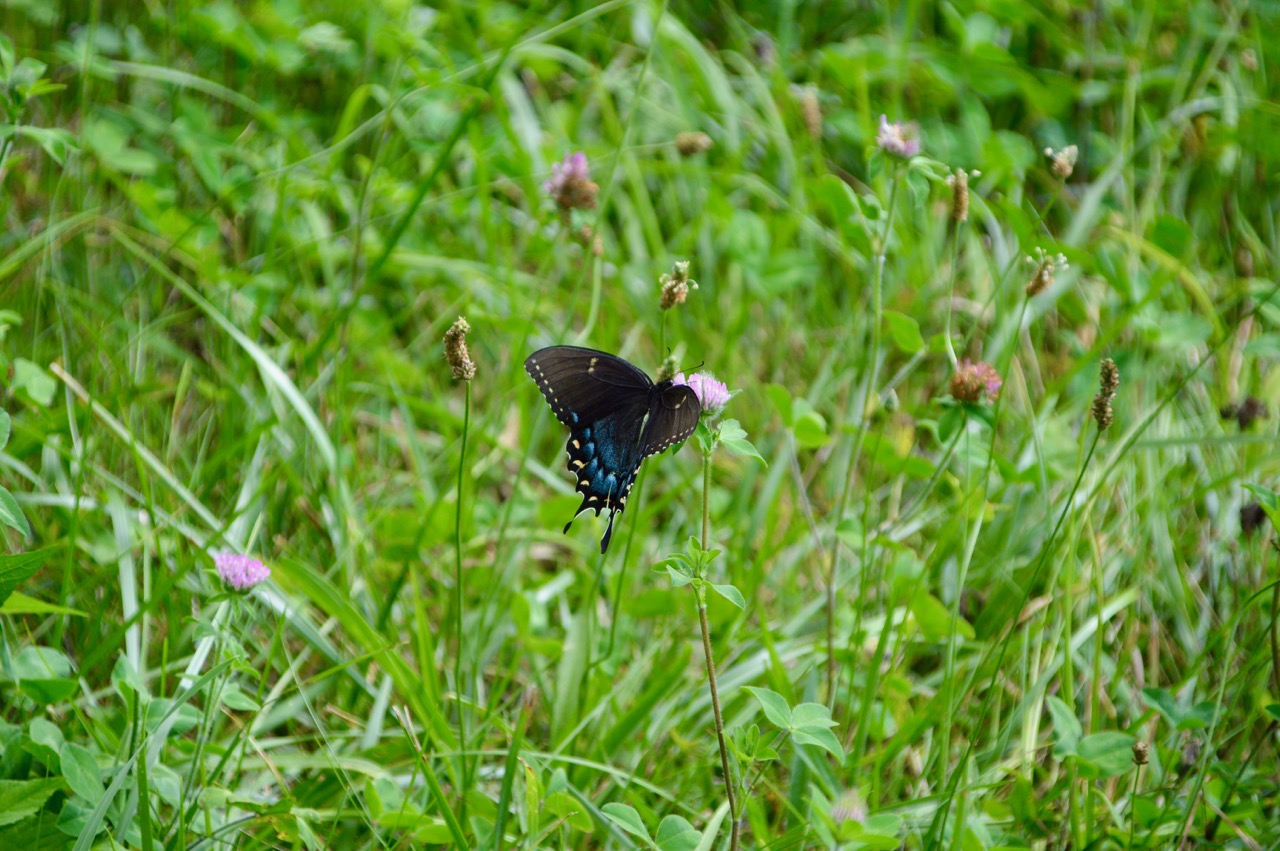 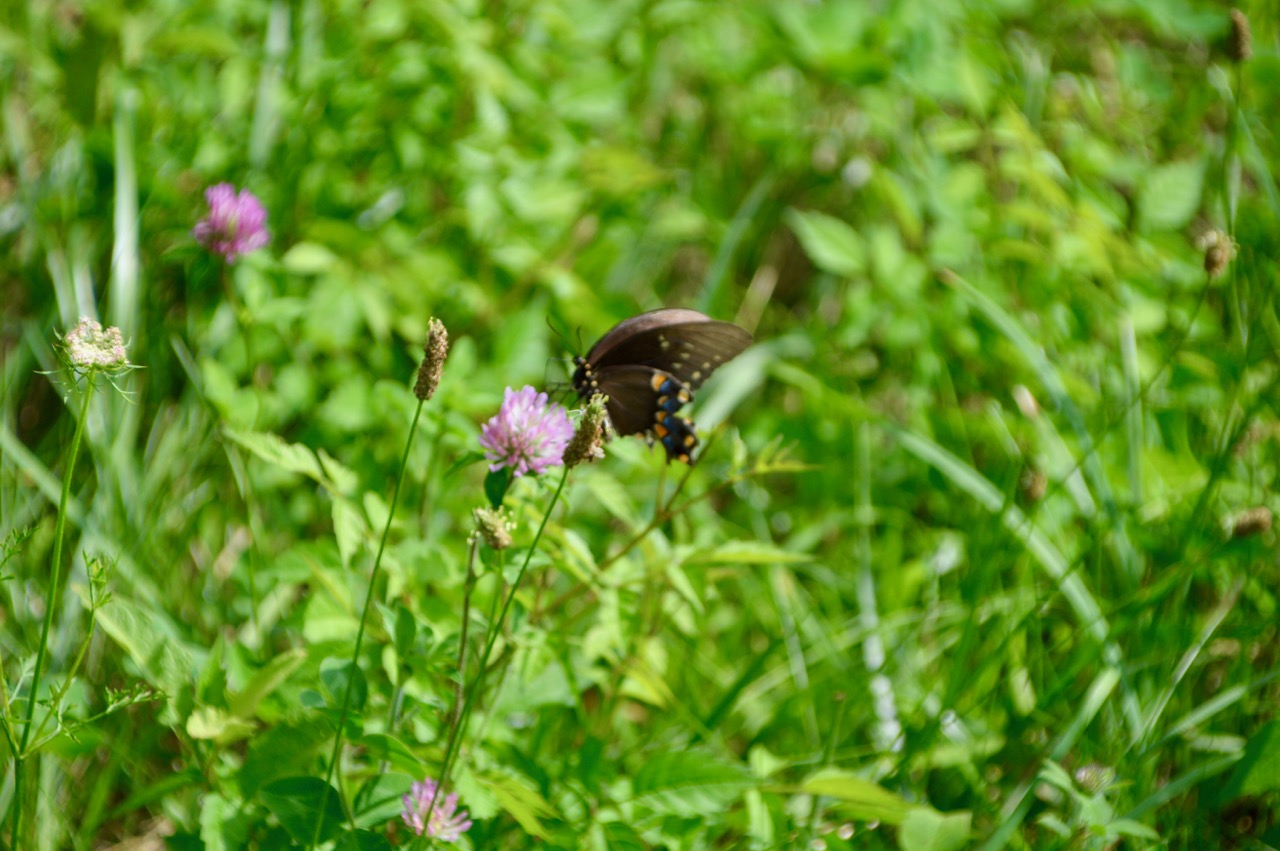 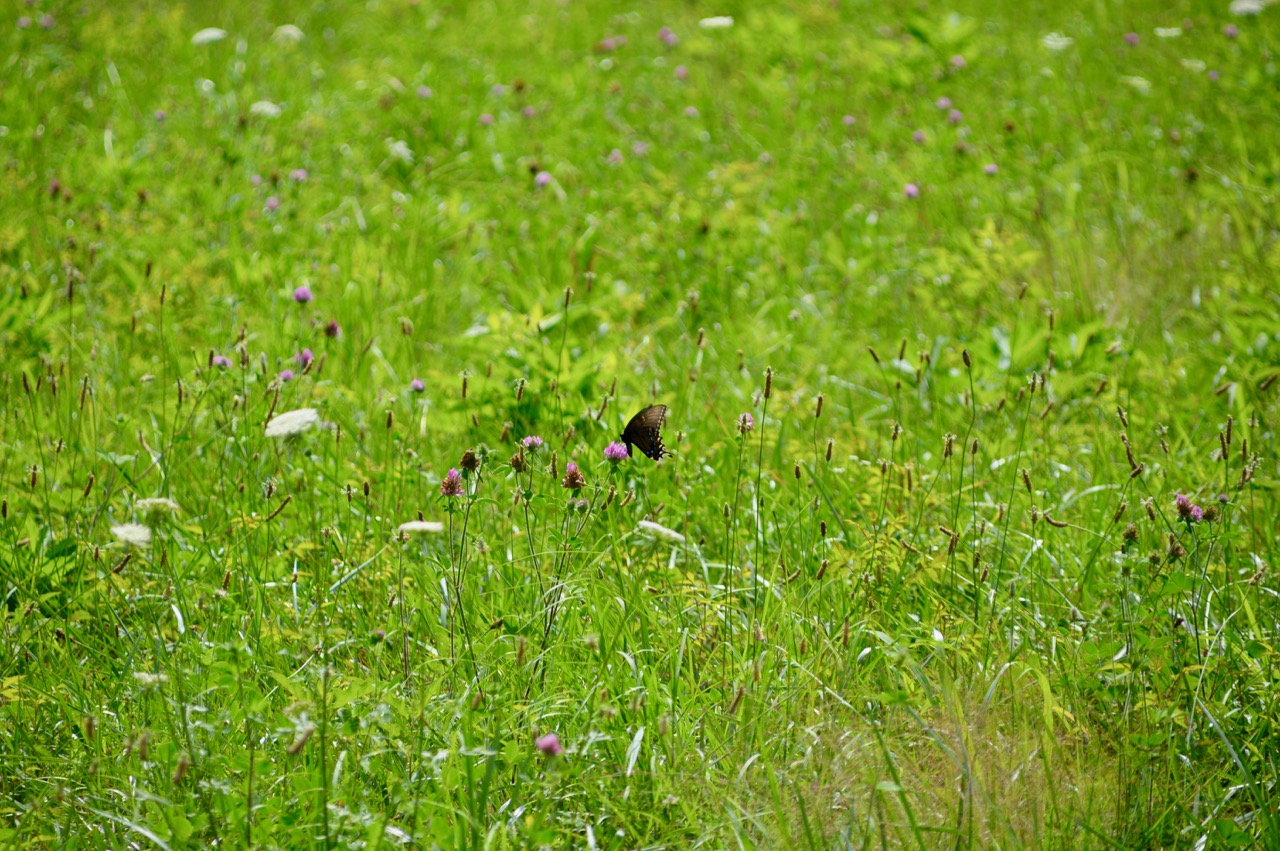 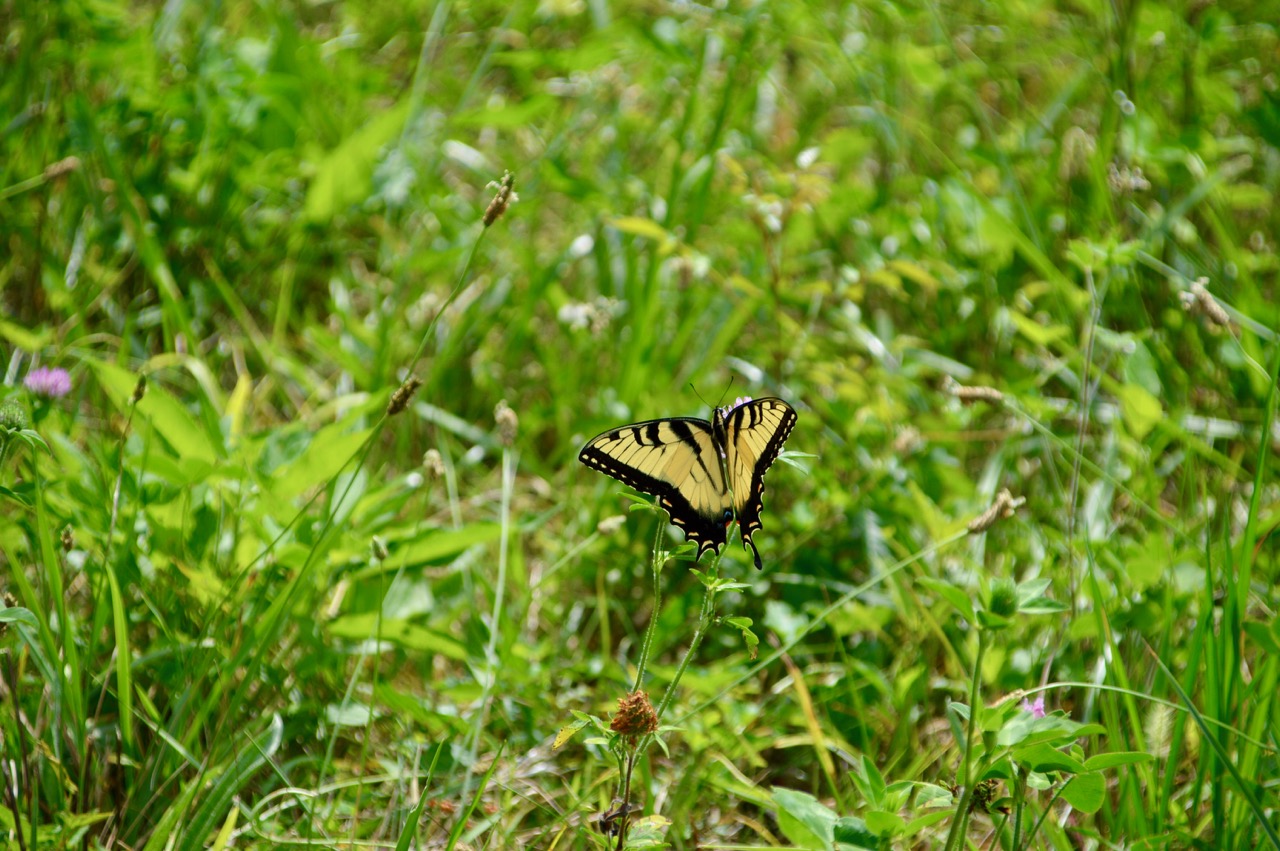 You can tell just how excited the hounds were to see that many butterflies in their field. 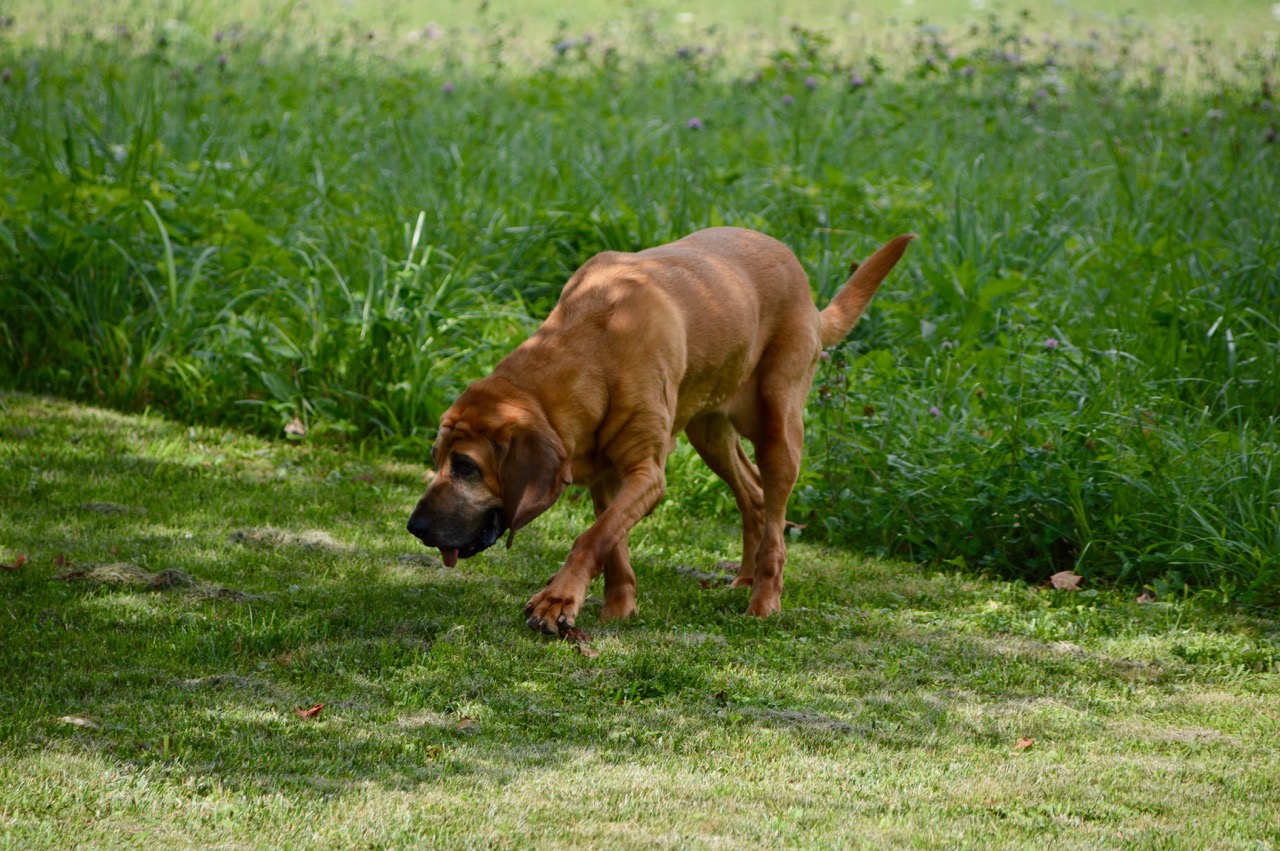 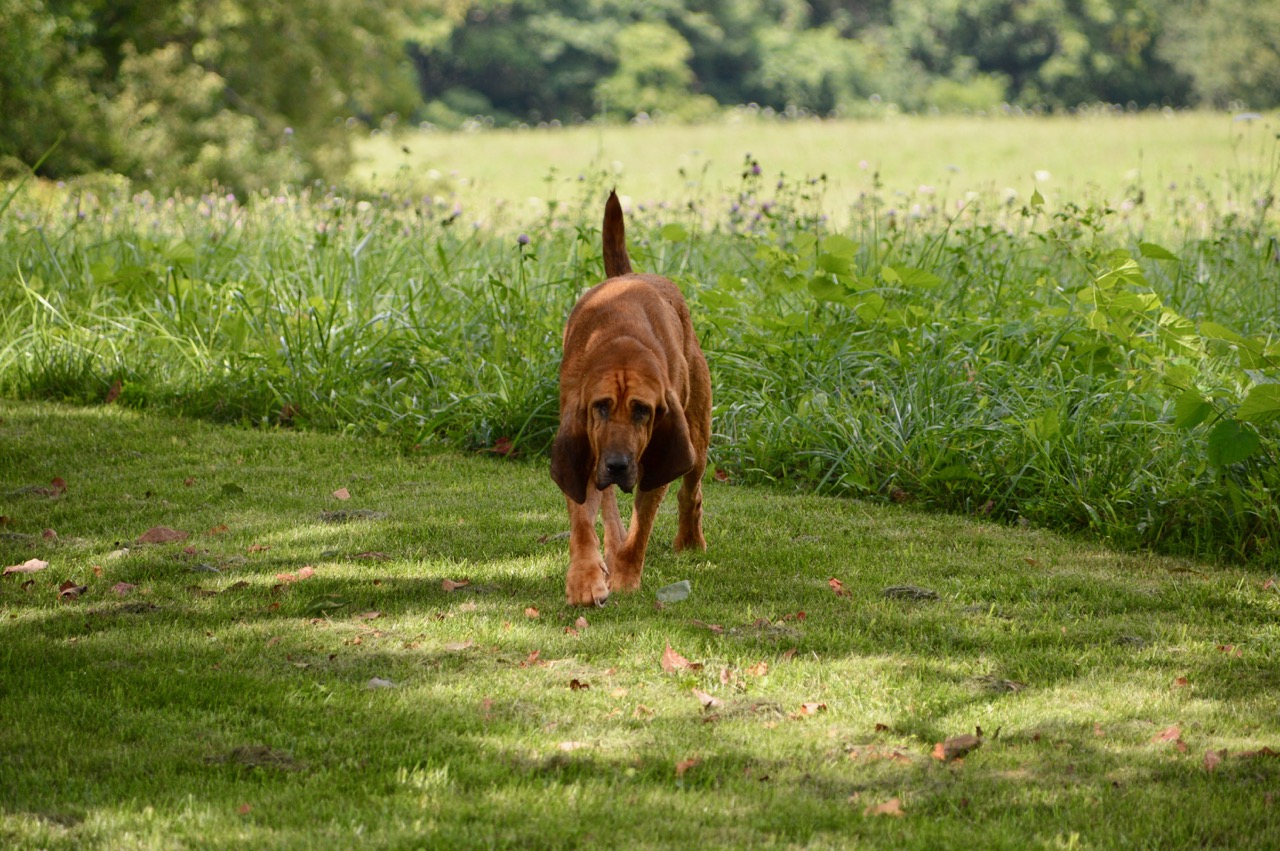 The slowly walked back to the house, walked inside with the air conditioned air when I opened the door. Then lay down next to my desk chair with their back up against each other as I put this blog post together.

I have not felt the effects of not drinking the strong ice tea I usually make. I follow the directions but I rarely have anyone finish a glass of it. It's dark like coffee and probably too strong. I'll never forget the day my dad took the 32oz glass of my ice tea I offered him for the drive home on a very hot August day. As he took the glass with him to his car, I saw him hiding behind his open car door pouring the ice tea into my gravel driveway.

Just the one sip he took inside was definitely too strong for him.   LOL

So without any withdrawal signs after switching to plain water, I'll be drinking cold water and watching more Reds baseball tonight ... or lets say I'll have the game on the tv in the background while I do other things. If the game gets out of hand, like losing again I will have to have a movie night for the 2nd night in a row.

It's been a great week here in 'the tropics' of Southern Indiana.
By Steve at 2:50 PM