You WILL LOVE This Senior Moment ... LOL 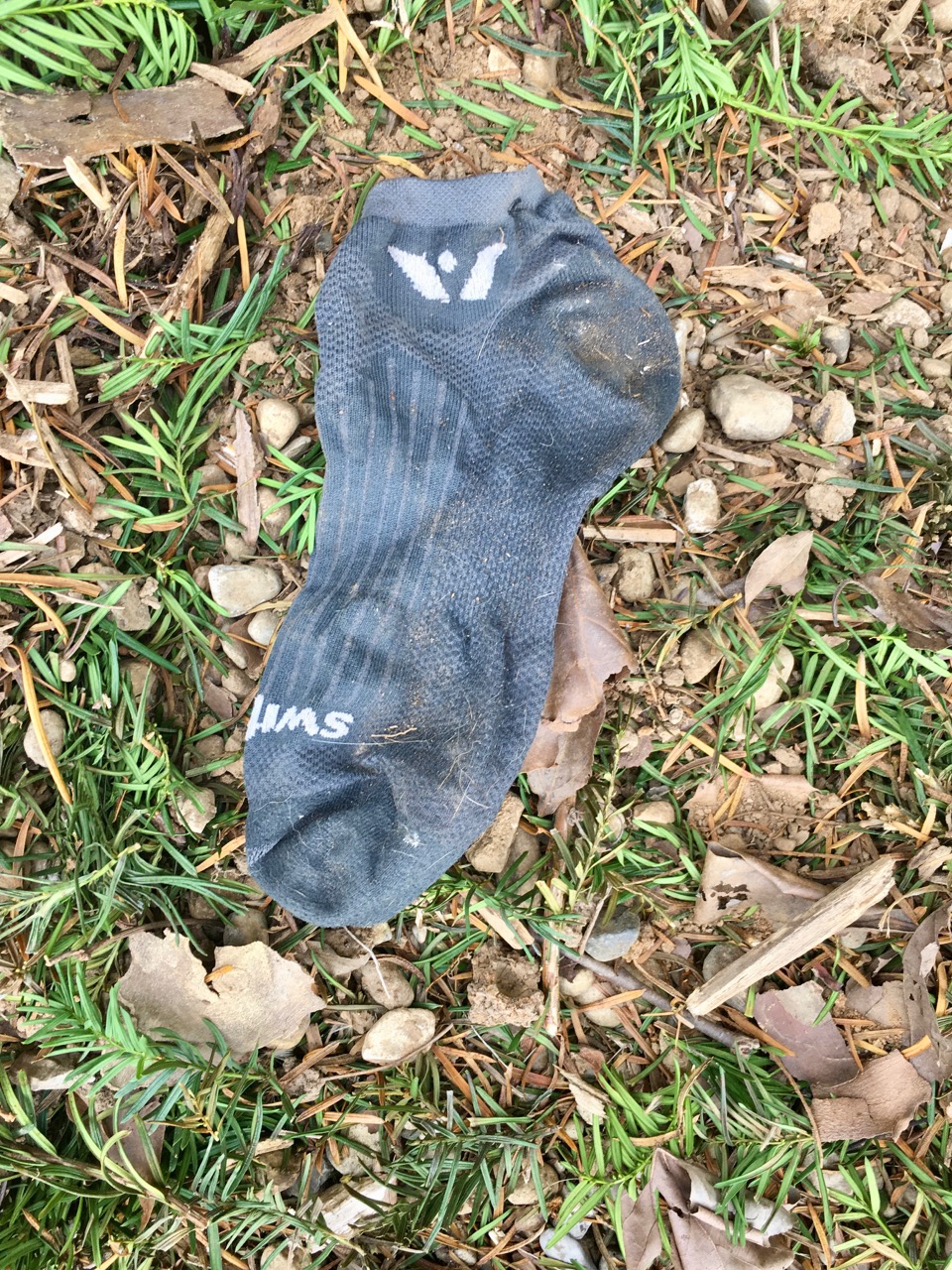 I'll warn you now, if you are drinking something from a glass, cup or can, you might sit it down and step away. The story I will relay to you in this post MAY make you laugh so much that you are out of control ... that nothing near you will be safe. I am still trying to believe it and after 4 hours I still cannot comprehend what my eyes told me ... and my rake.
I don't know if it was the 'excitement' of the new project of replacing the Yews or anxiety over "what did I just do"?, that led me to waking up last night multiple times. Another words, the chances of me being outside in the yard starting my 'new' landscaping project at 8am ... were slime and none.
Once I did get started at 9am, Stella did not take long to show me that letting the hounds join me this morning in the yard while I worked in front yard was not a possibility. As you can see she was caught heading over to the wooded area next door. By the time the picture was taken she had heard me and was walking home. 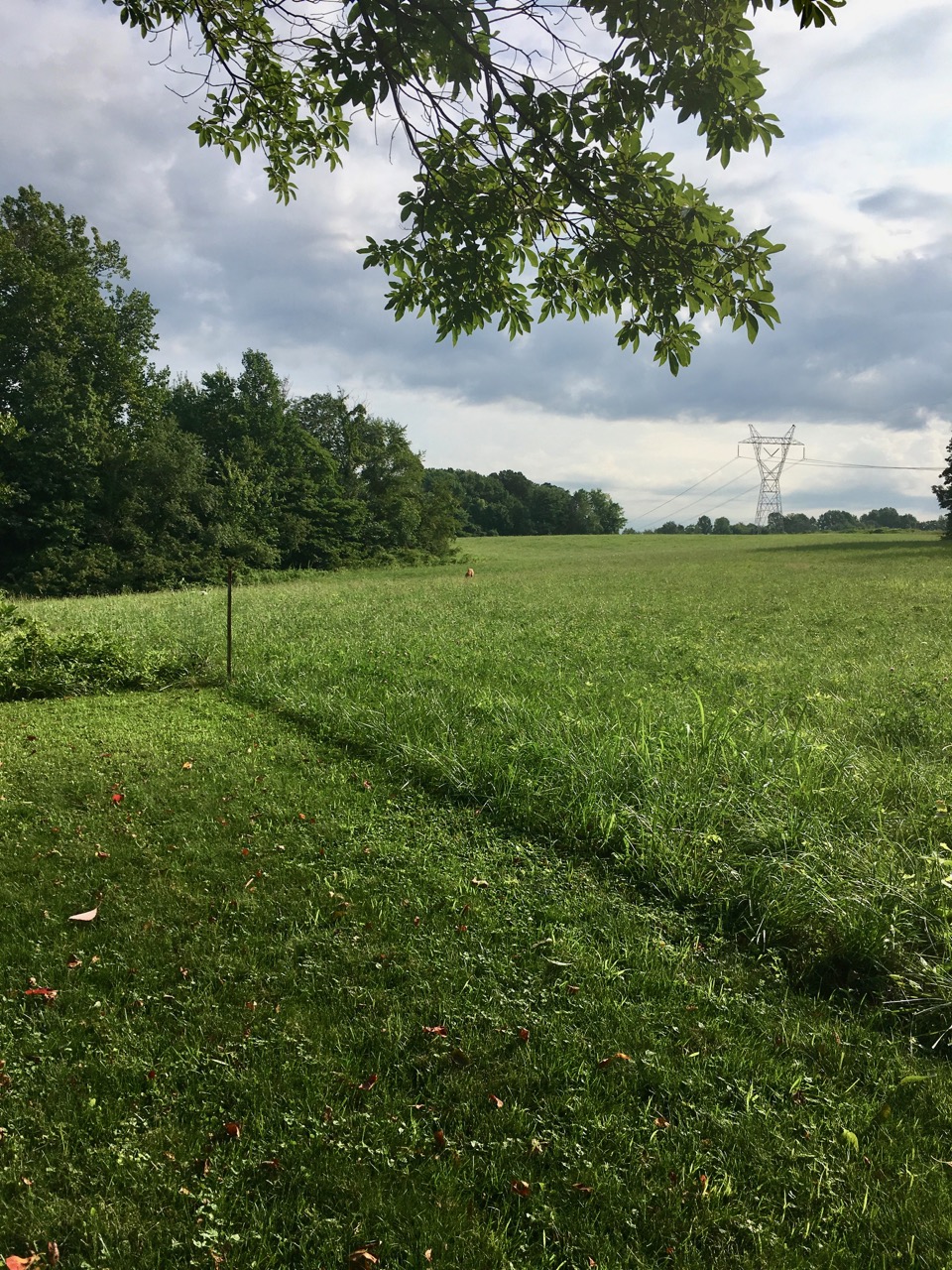 It was a gallant try on her part. BTW, all of these photos today were taken with my iPhone 6s. I thought I'd let those few people know, that are trying to decide what phones to buy as their first smartphone. 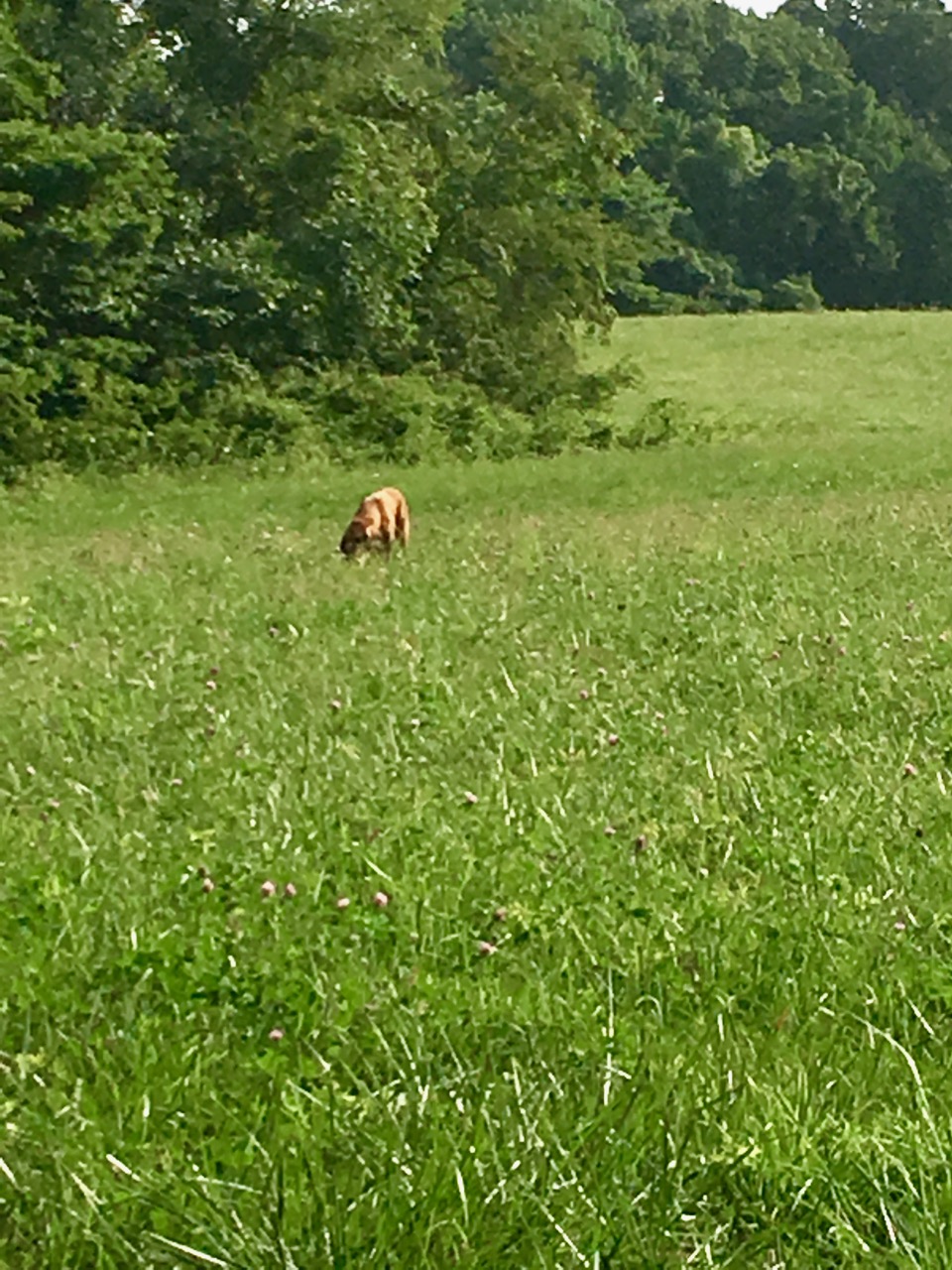 It does NOT work well in the zoom mode. The picture of Stella in the middle of the field walking back with the storm clouds and high power tower was NOT zoomed in but normal setting. 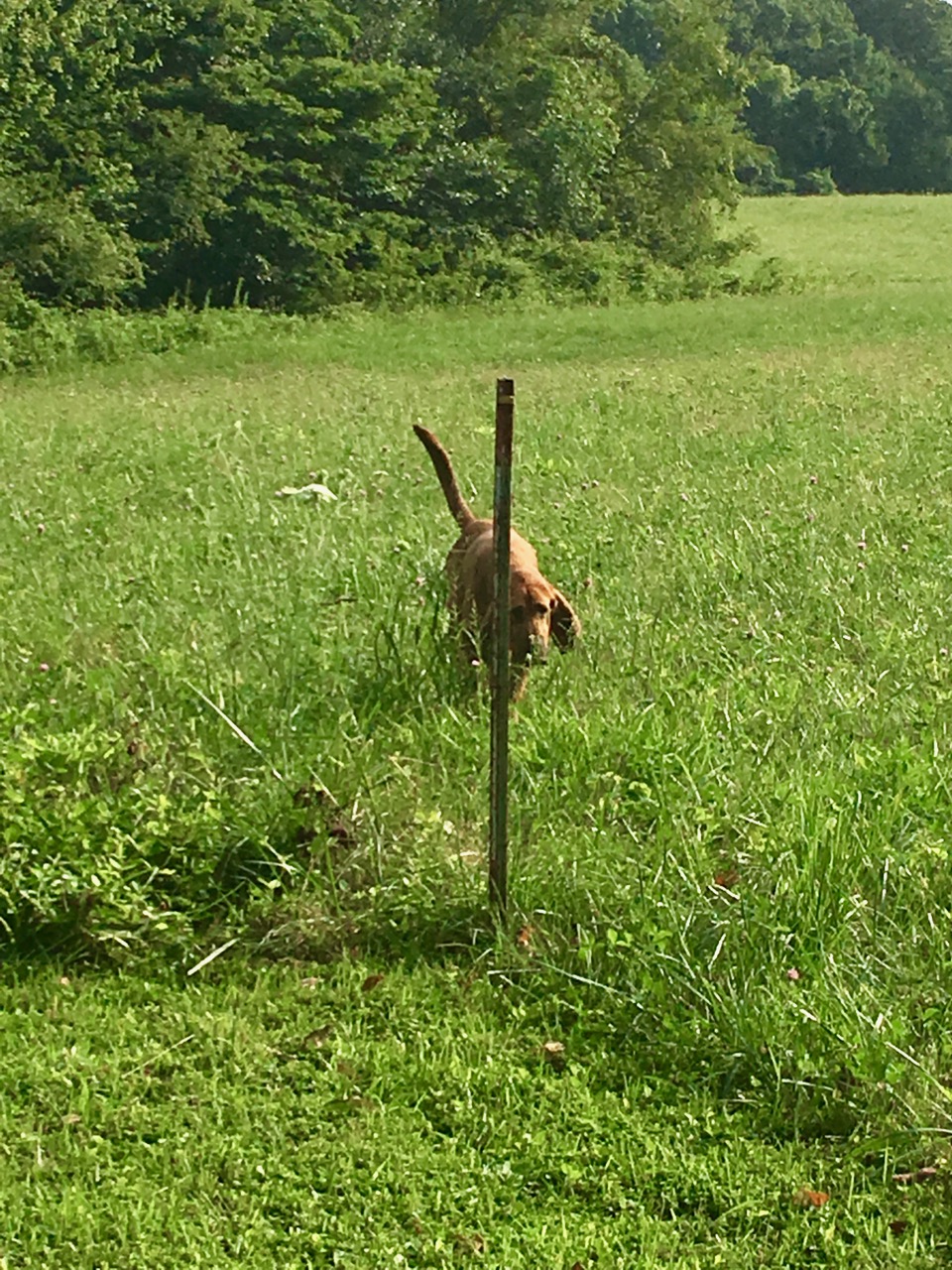 I decided to let the hounds have the whole house to lay around in and enjoy the cool AC. It was so hot this morning and all last night. It was so hot, that at 4am during one of my many times being awake I heard the AC running which is rare for that time of day.

I remembered to put my bowl of fresh fruit on top of the fridge and out of Stella's reach. The AC on meant my bedroom windows were closed so she could not tear out anymore screens. Things seemed safe for her to stay inside without being shut up in the bedroom.

The plan for today was to rake up what was left of the Yews after they were pulled out of the ground and taken away. I wanted to get as much of them off the yard and off the flowerbed as possible. 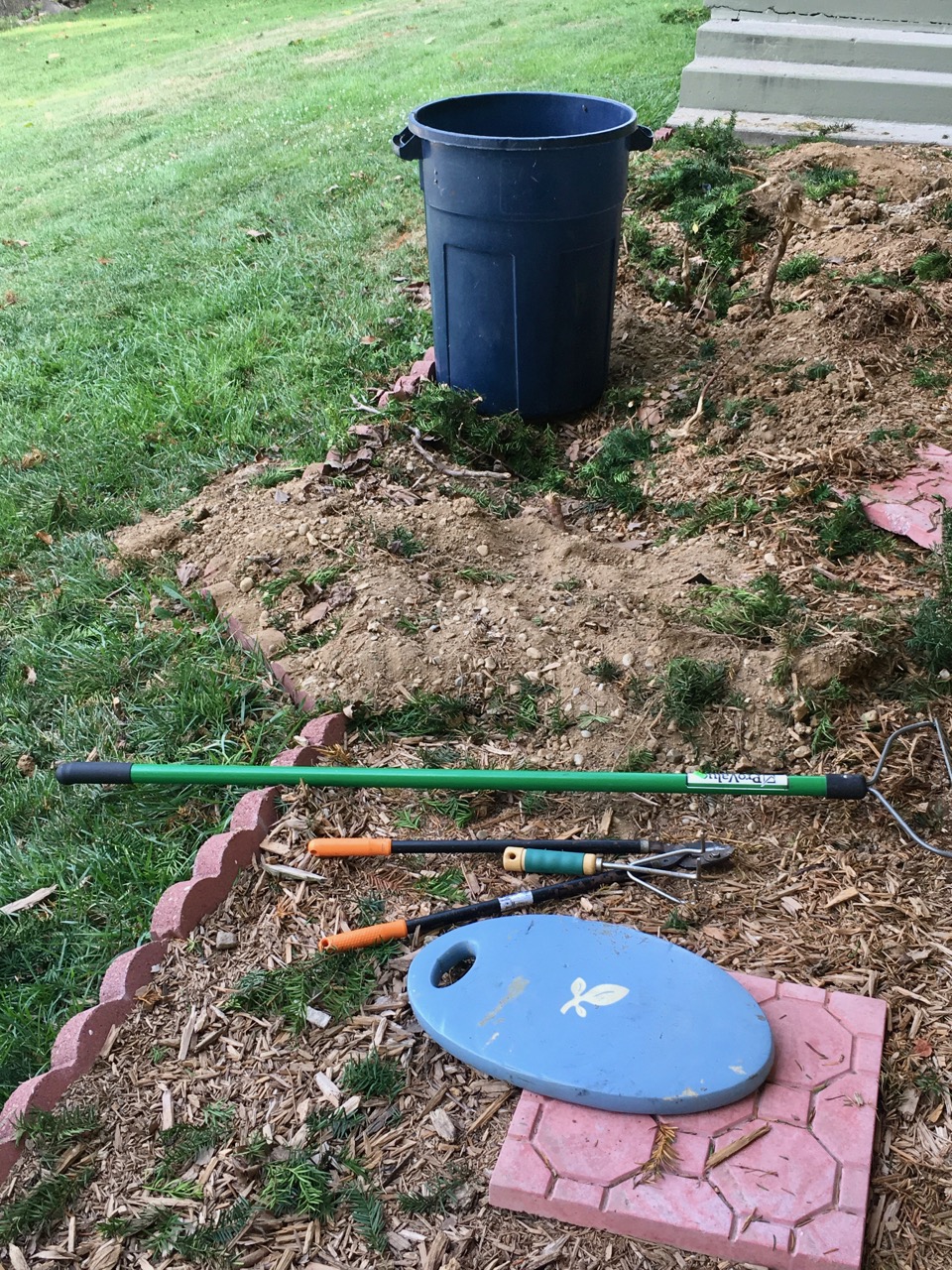 I was guessing that I only had a couple of hours to get this done before the blasting hot sunshine would be on this side (west) of the house. I had only three small piles of Yew branches that I raked up in the yard. All the dirt that had been drug to the yard would be moved back into the bed areas. 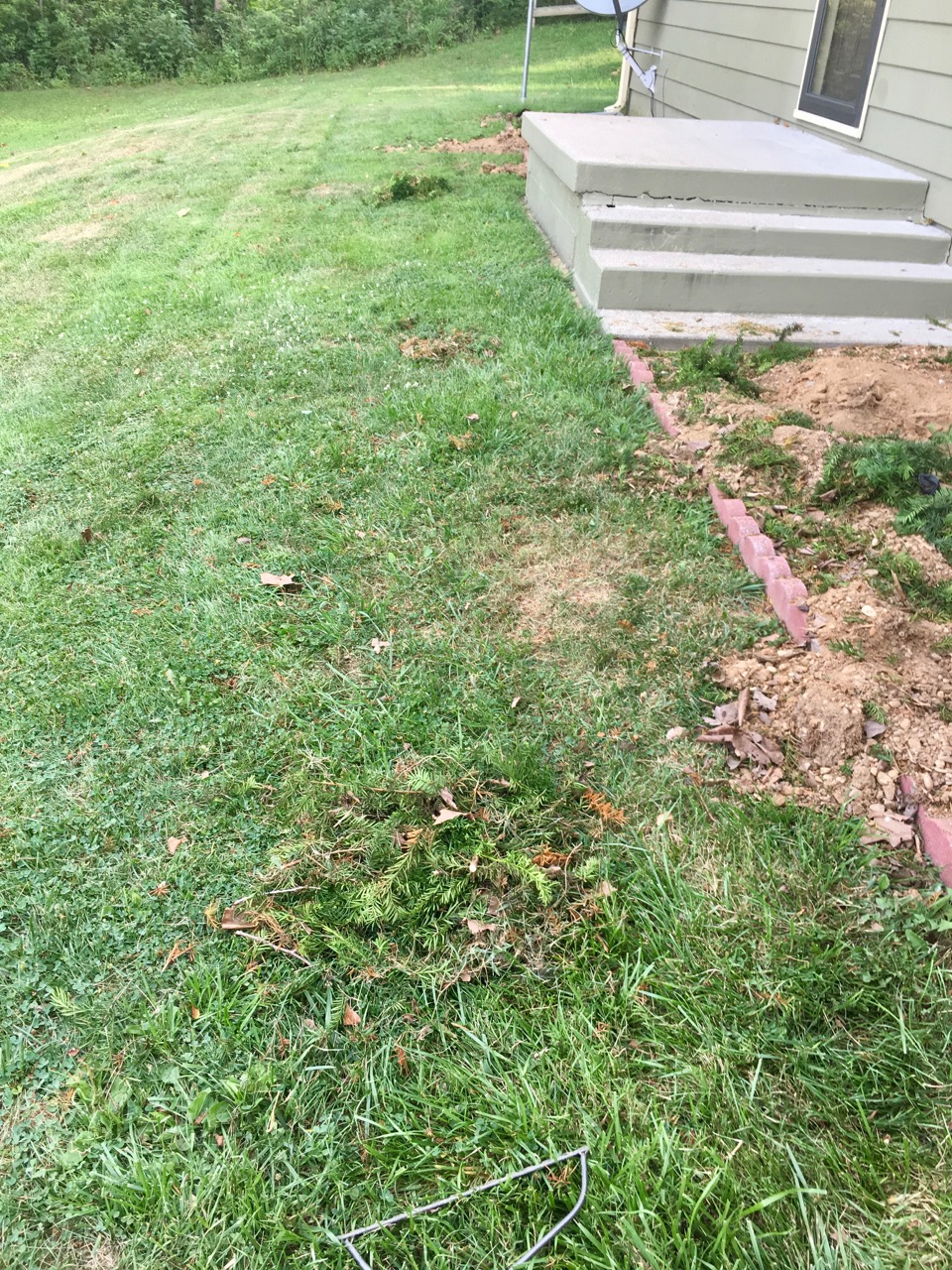 As I was raking the dirt back into the holes were the Yew root ball was, I thought my rake had pulled up some of that black landscaping ground cover I had installed 5-6 years ago to prevent the weeds growing. It was something else ... I COULD NOT BELIEVE WHAT IT WAS BUT I WAS THRILLED WITH WHAT I FOUND !! 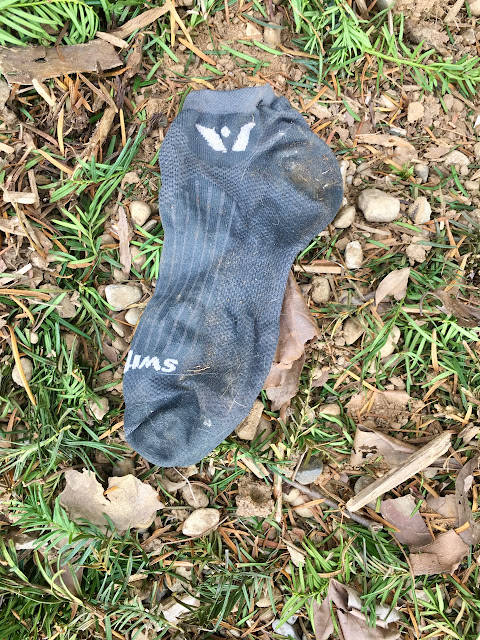 It was one of two of my missing favorite socks that I had been looking for since March!! I remembered folding them up after taking them out of the dryer months ago and putting them in my dresser drawer of socks. I DO REMEMBER DOING THAT ... one time.
I couldn't find them when I went back to wear them months ago. It drove me insane trying to remember where they could have been. I pulled every sock out of that draw to see if they had been mixed with dress socks. I even moved the chest of drawers in case the hounds had hid them under the chest. They were nowhere.
Since I had found one in the dirt where they Yews had been pulled from the ground I was hoping the second one was in that same area and had not been taken away yesterday. Could the second sock be stuck on one of the Yews that was taken away? 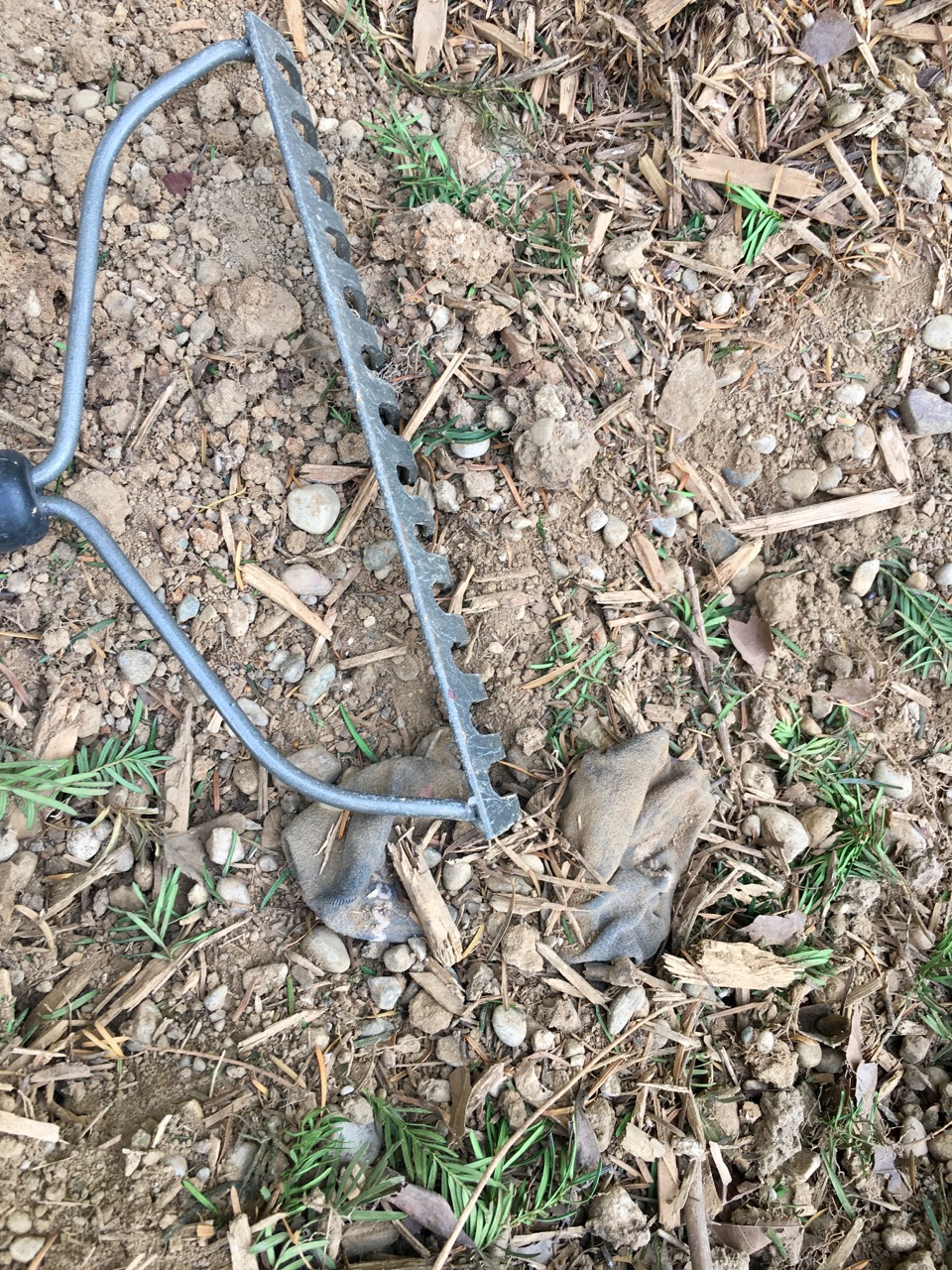 I lightly ran my rake through the loose clay dirt no longer trying to separate the Yew leaves(?) but to see if I could find that second sock. Then .... there it was. Buried in a pile of dirt because at first Ted used his backhoe to dig out the Yew instead of just pulling them out like he did the last three. 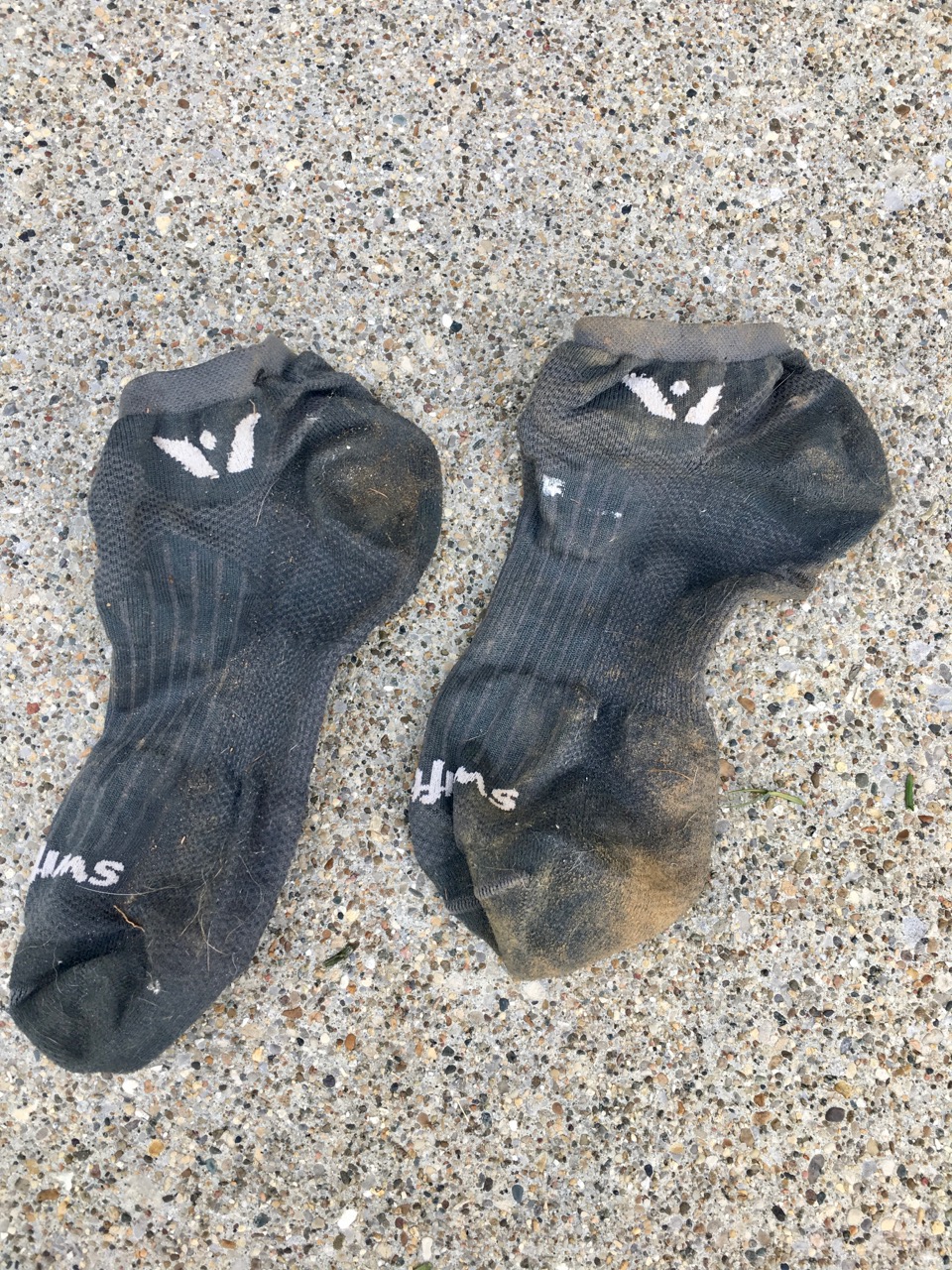 After 4 months of looking, then wondering what ever happened to those socks that I KNEW were in my drawer of socks. Who would have ever imagined having the Yews taken out and away when you thought the request was canceled ... would lead to finding the missing socks, gone for 4 months ????  I'd laugh but I am too amazed about this story.
At 65 years old we  keep telling our friends "I feel great", remind each other that 60 is the new 40 and we really won't be old until we are in our 80's. We may not recover from physical activity as fast as we use to but our minds are as sharp an the edge of a razor blade.
Then a story like that happens and you fall back to reality to see that you really aren't like you use to be.  LOL 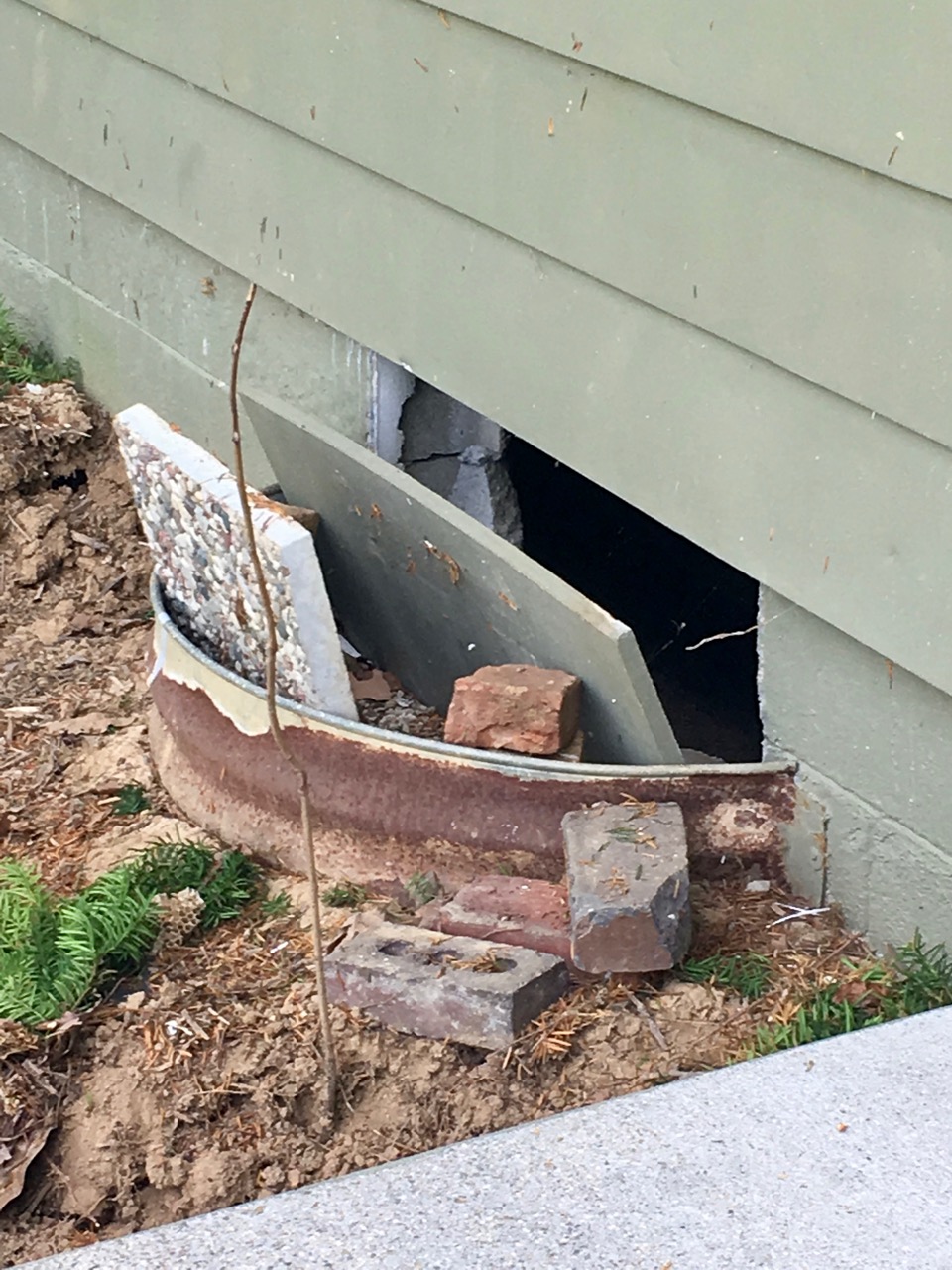 With the Yews out of the way I could now open that window that is the entry to my crawl space. It's one where you can almost stand up under the whole house ... there is quite a hole under there. It came with a framed window that you could open to a screen so ventilation would take place in the summer.

That took only one tv cable installer to break not only the glass but the frame as he tried to get under the house to run cable years ago. I replaced the broken window with a solid piece of wood and that heavy stone to block it closed ... to keep the cats out and any other animals ... like skunks. 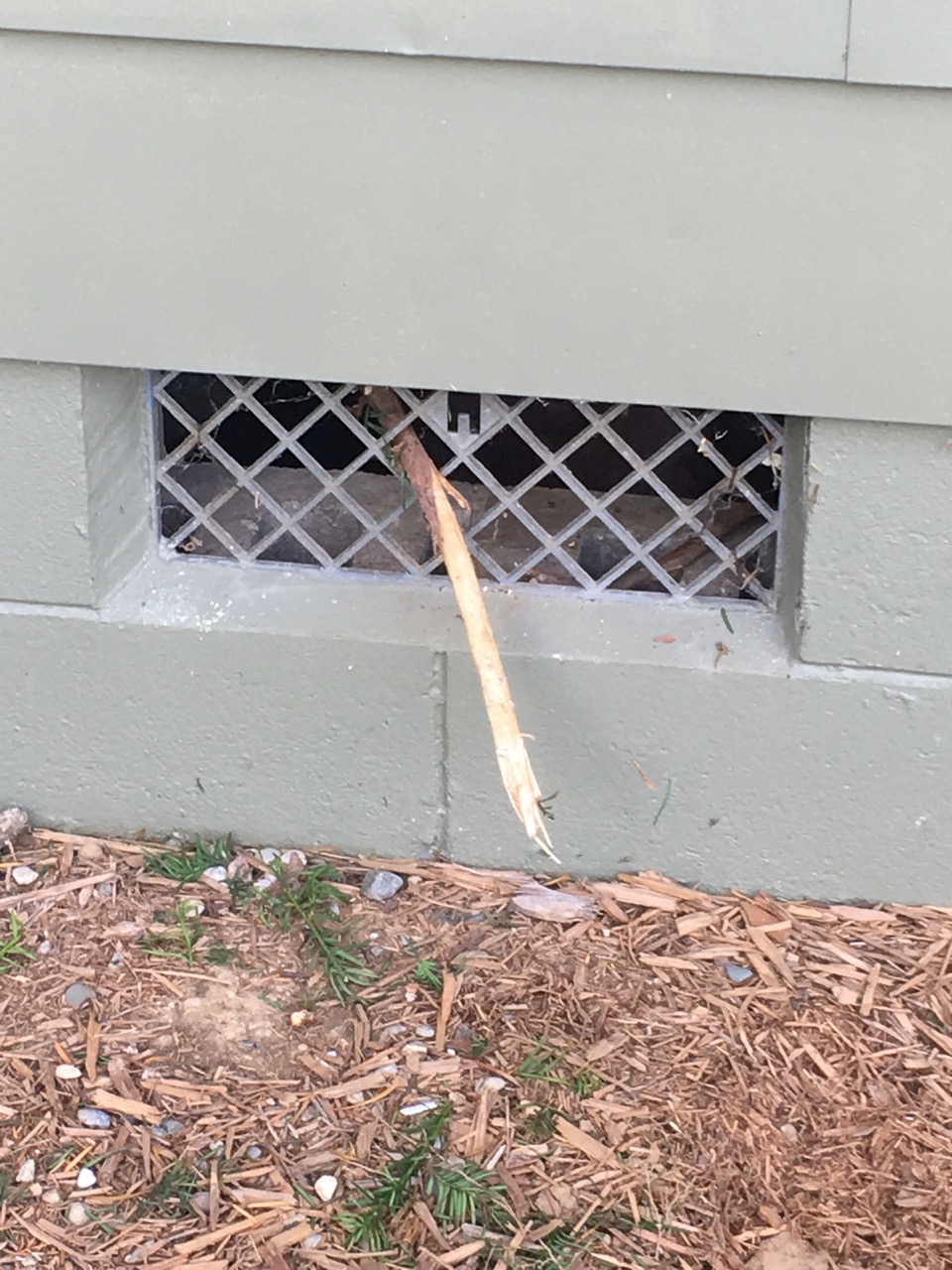 This vent was open but only about an inch. I don't know where the locking lever went to so with a fresh new Yew root, I could prop open the vent until I can repair it.

Here are a couple of more pictures to show just how thick the root of the Yews got. They were not deep rooted but some of these thicker ones are deeper than I can pull out. I cut them off as low as possible with the pruning shears. Ted told me they would eventually rot away. 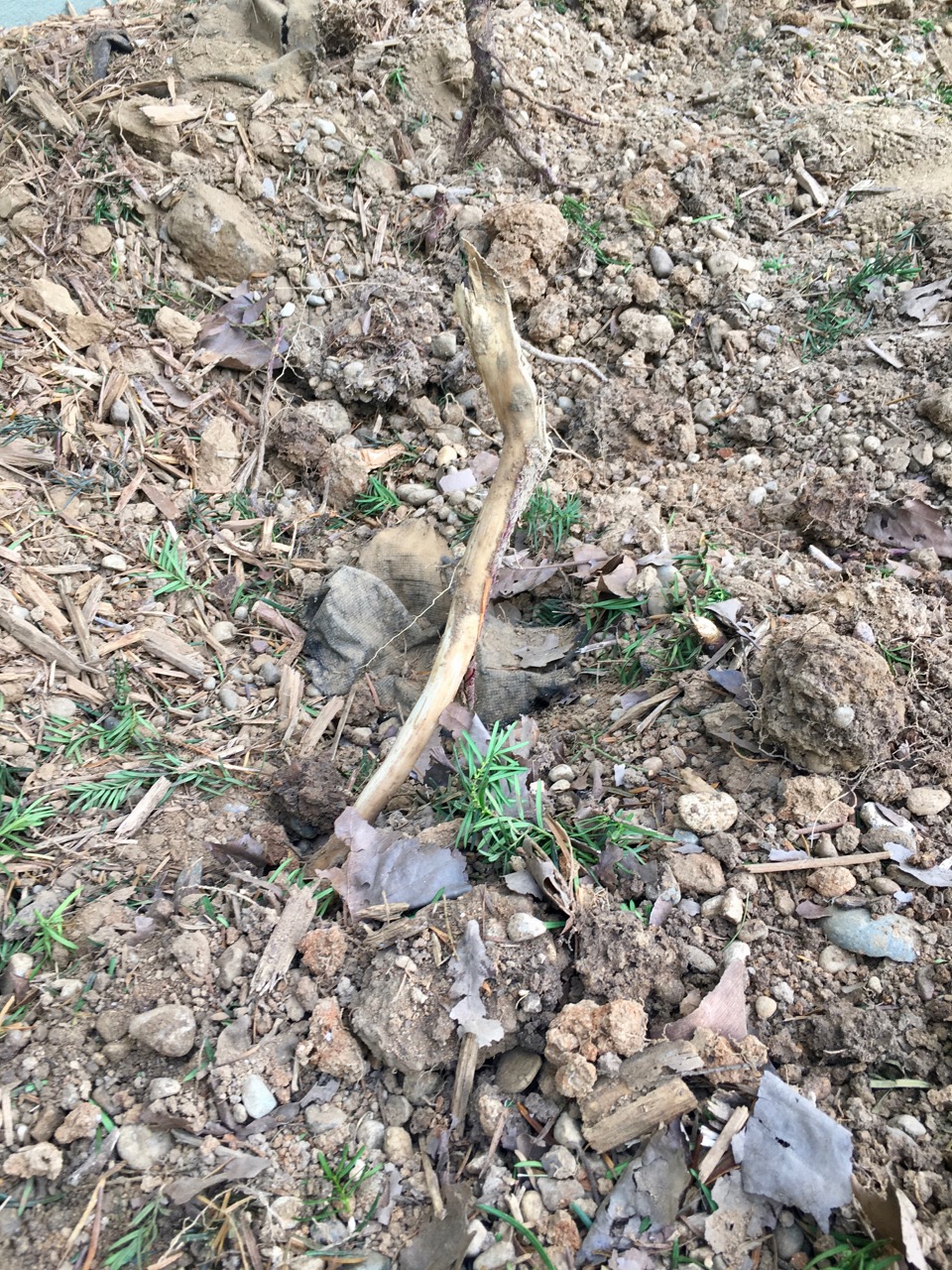 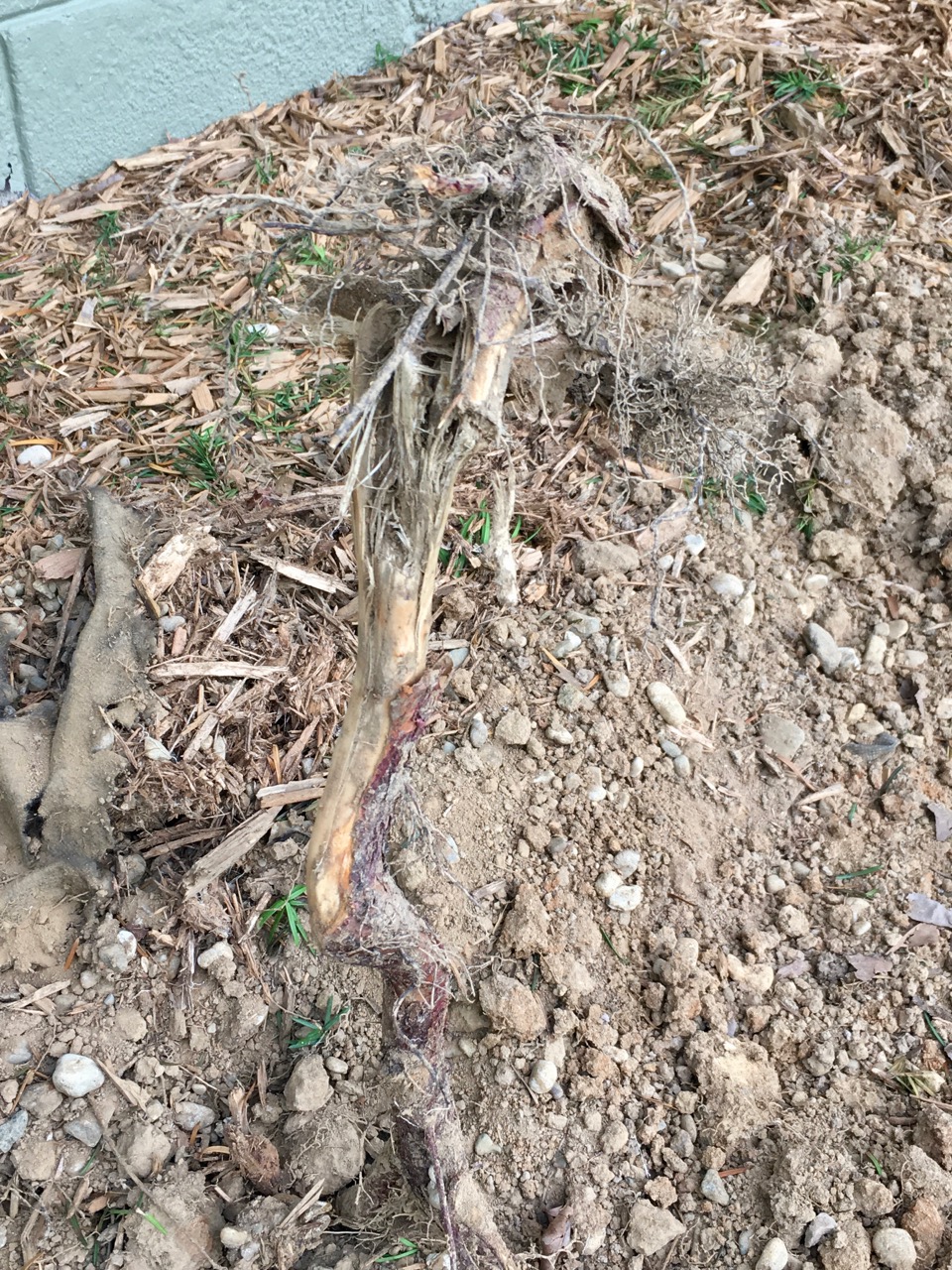 All the recent activity must have uprooted this toad's home. He or she sat and looked at me with displeasure while I sat down drinking water and taking a break. I could remind myself just how hot it really was at 10am. Later the toad turned around facing the nice raked cleaned dirt ... and disappeared. 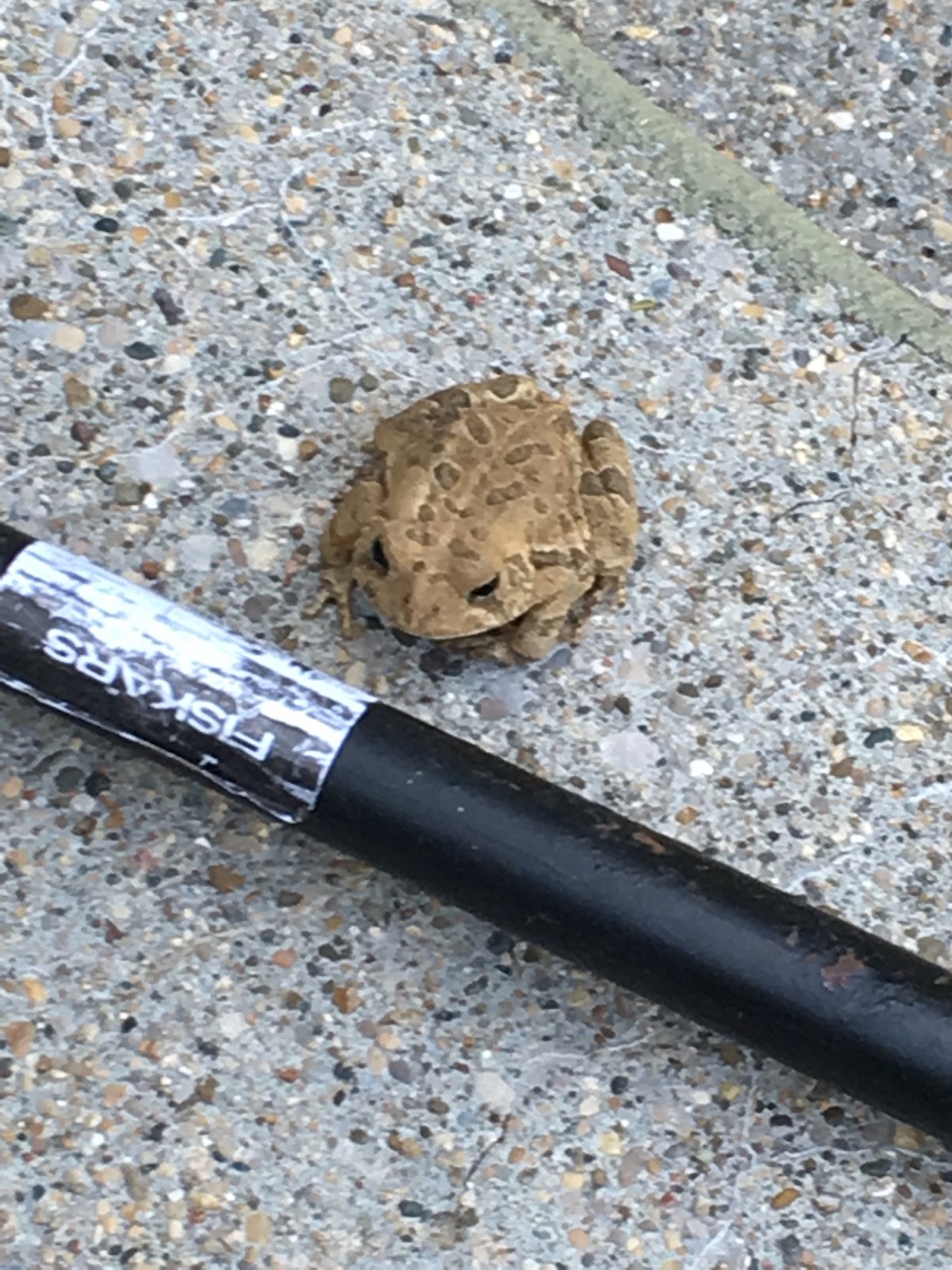 After looking through all the suggestions I received last night and this morning for what plants or shrubs to use to fill up these beds and cover some of my house ... I have different ideas I need to sort out. This might take a couple of weeks to complete. 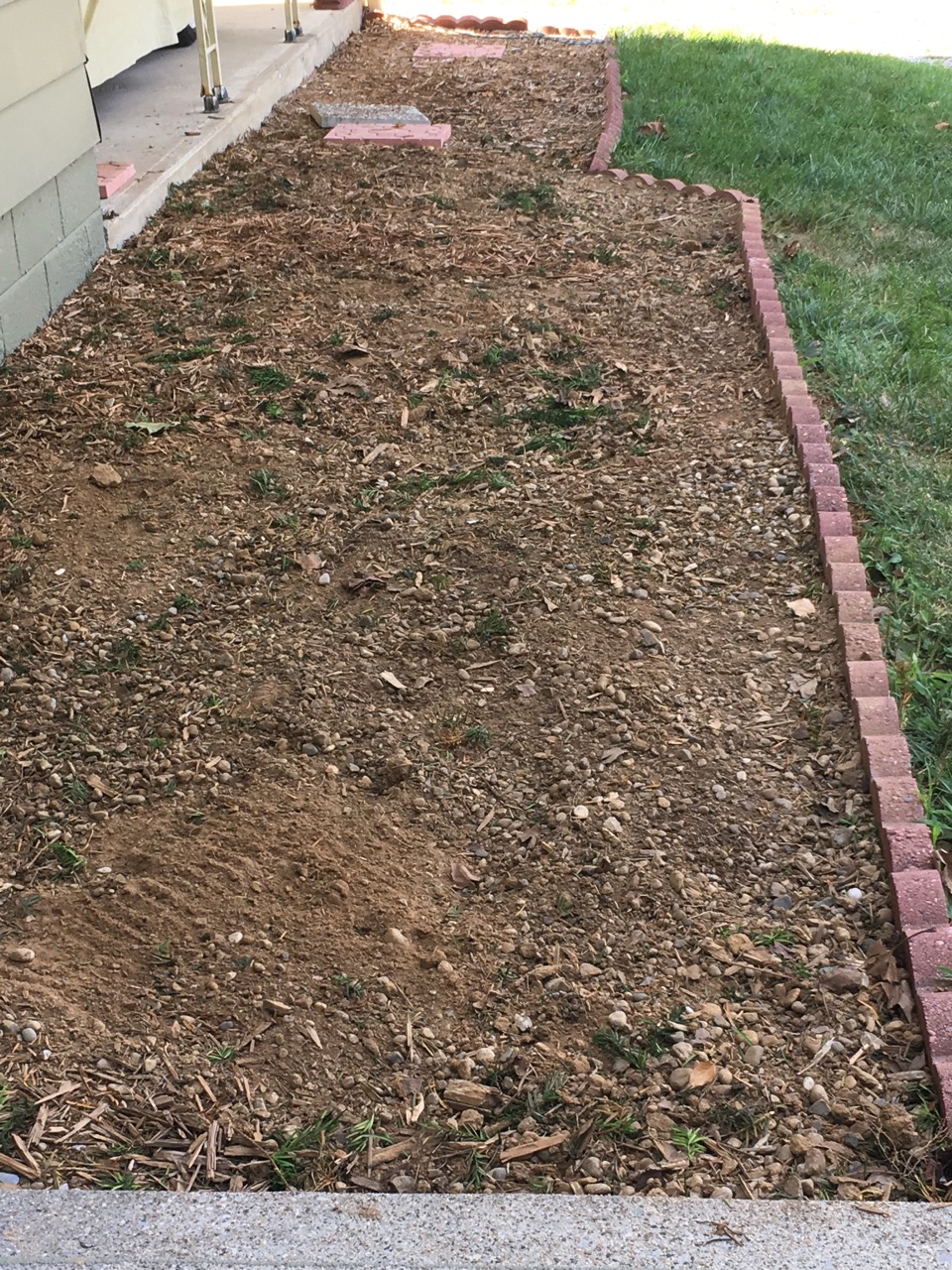 While clearing this area I was thinking that an Azalea in front of the DirecTv dish might be good. They grow to only 3' high and that would hide the bracket for the dish. I might go three across but I really don't want to block the way to get under the house, so flowers such as hostas might work well there. 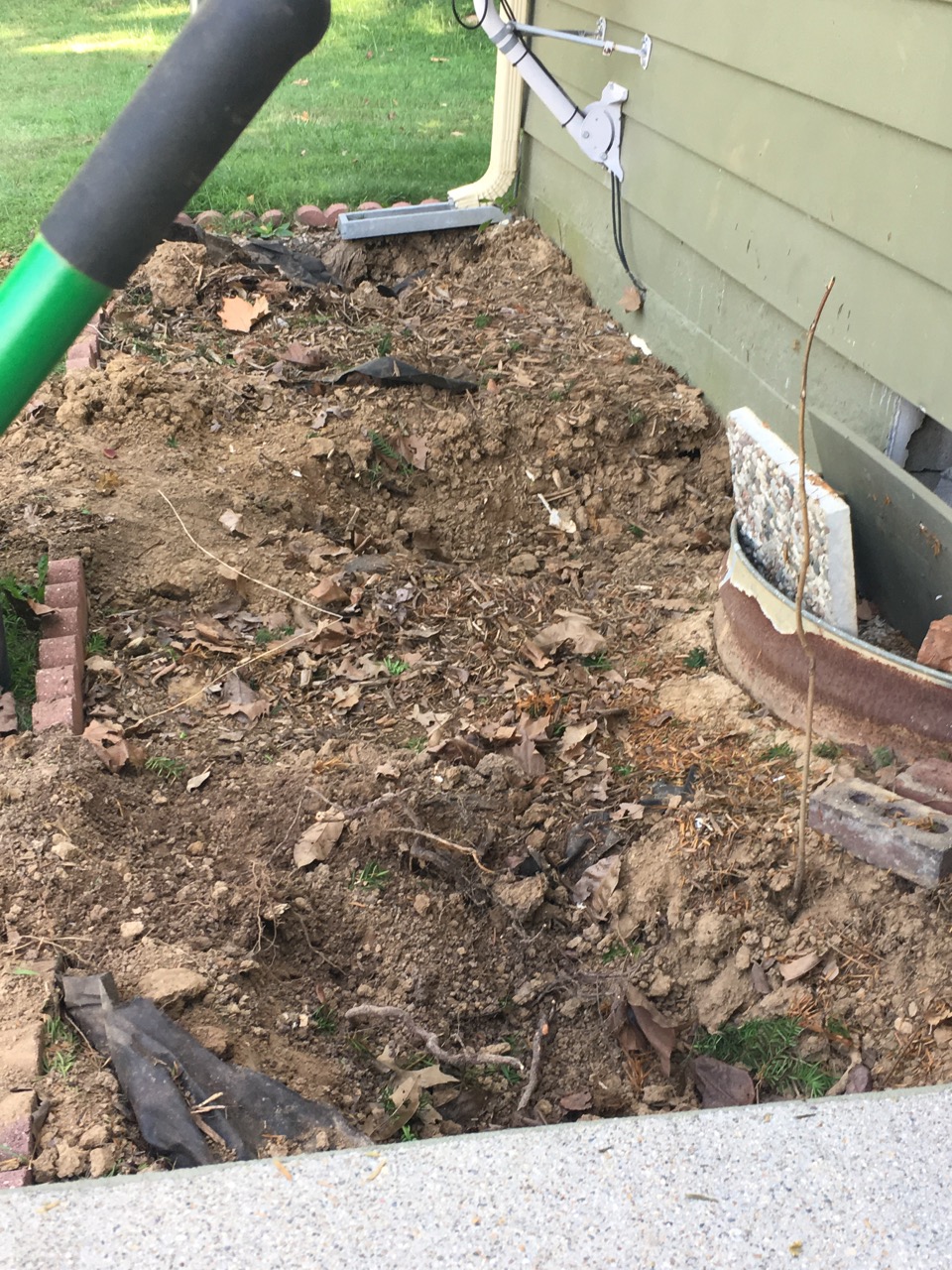 I am going to fill these three holes with top soil, then rake and mix it in with the light brown clay in hopes of softening up some dirt for flowers to grow. I will also be changing those downspout drains to extend out over the edging. 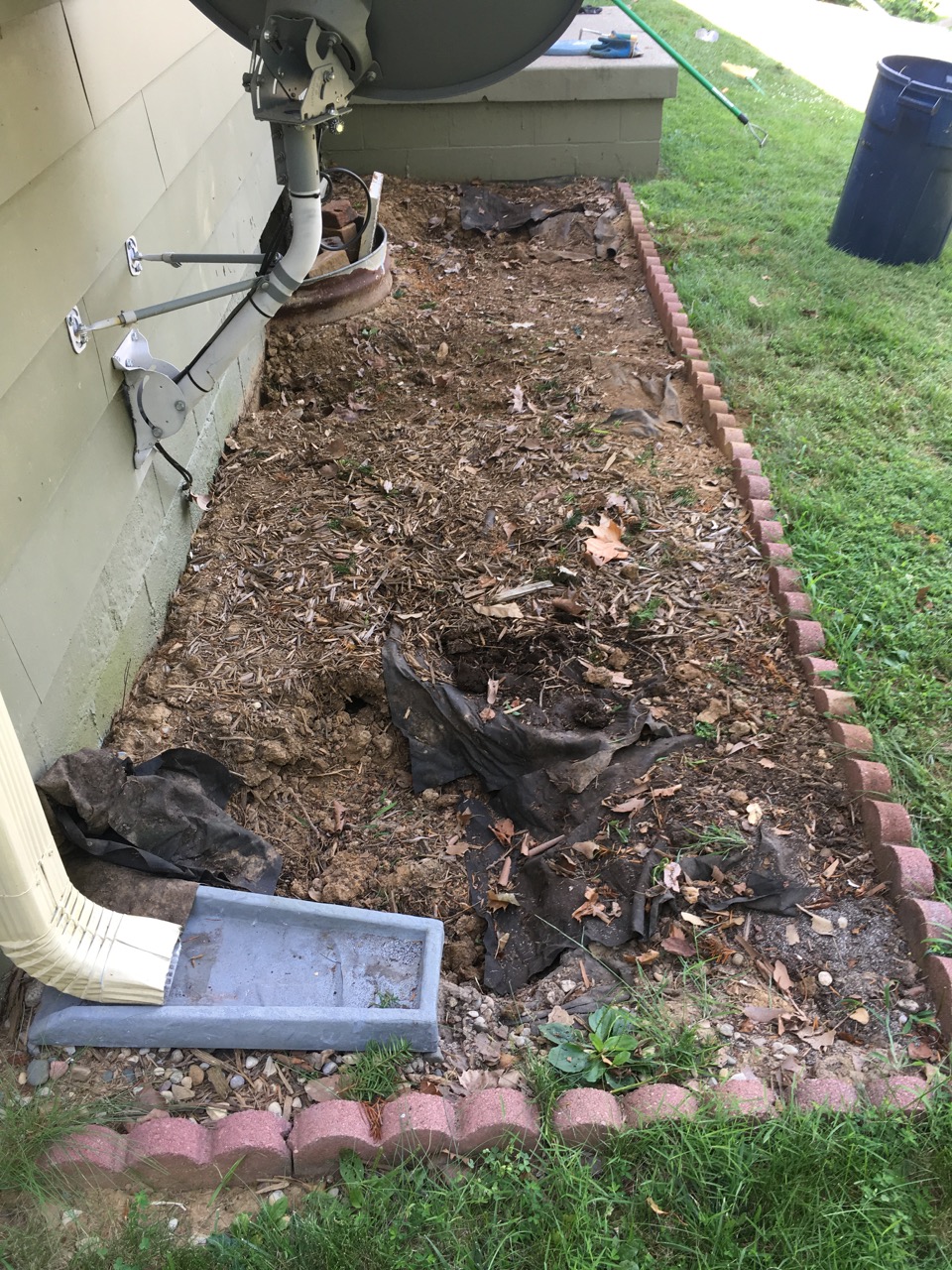 It was just about 11am when I noticed my shade was about to be burnt off by the hot mid-day sunshine. It was 88° in the shade and I had no plans to work after this. I just wanted to get both areas cleaned up, raked and all the dirt moved from the yard back into the flowerbeds. 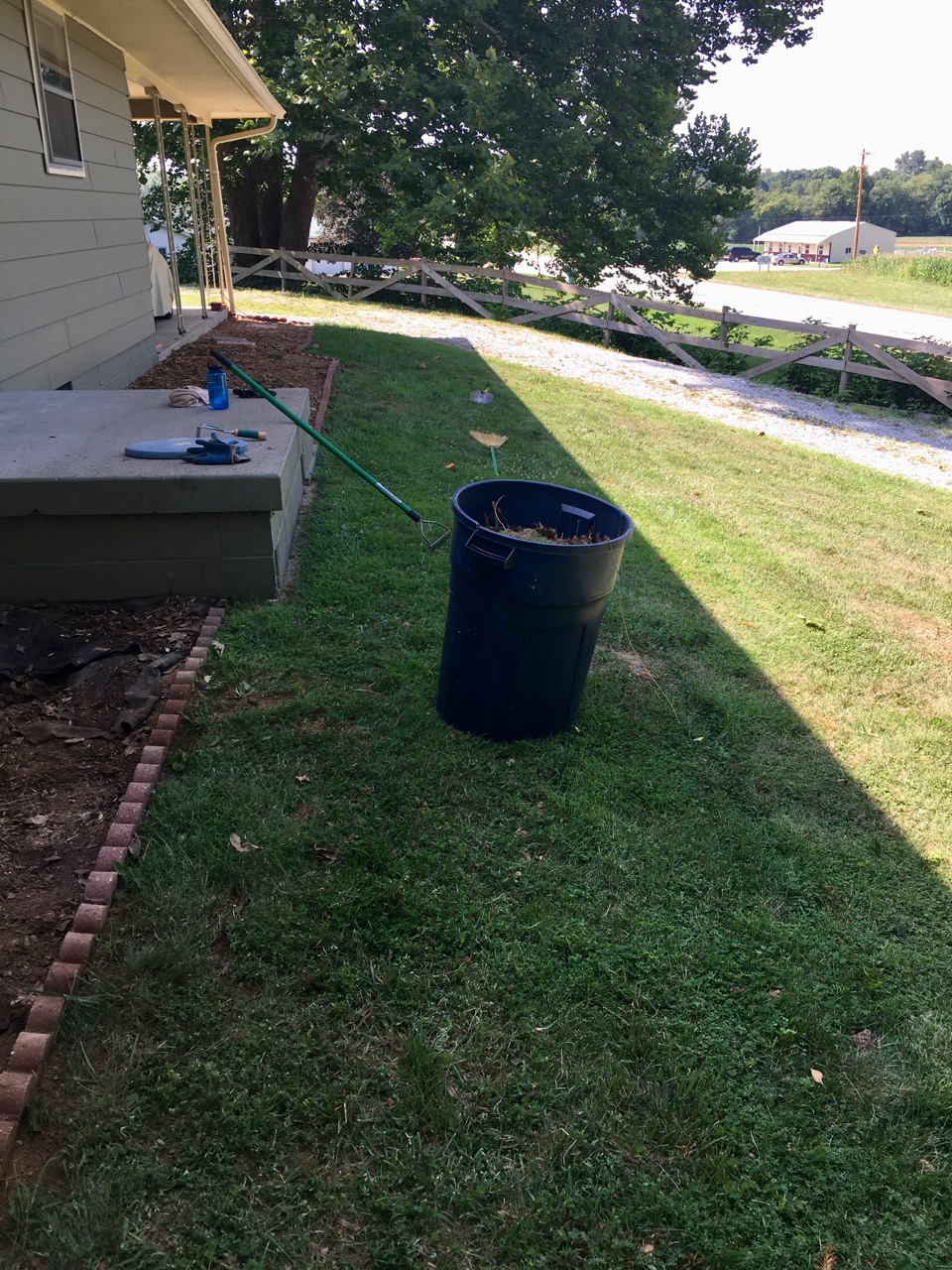 Over the years I cannot ever remember having a whole baseball cap soaked with sweat. This isn't completely drenched but it's close. 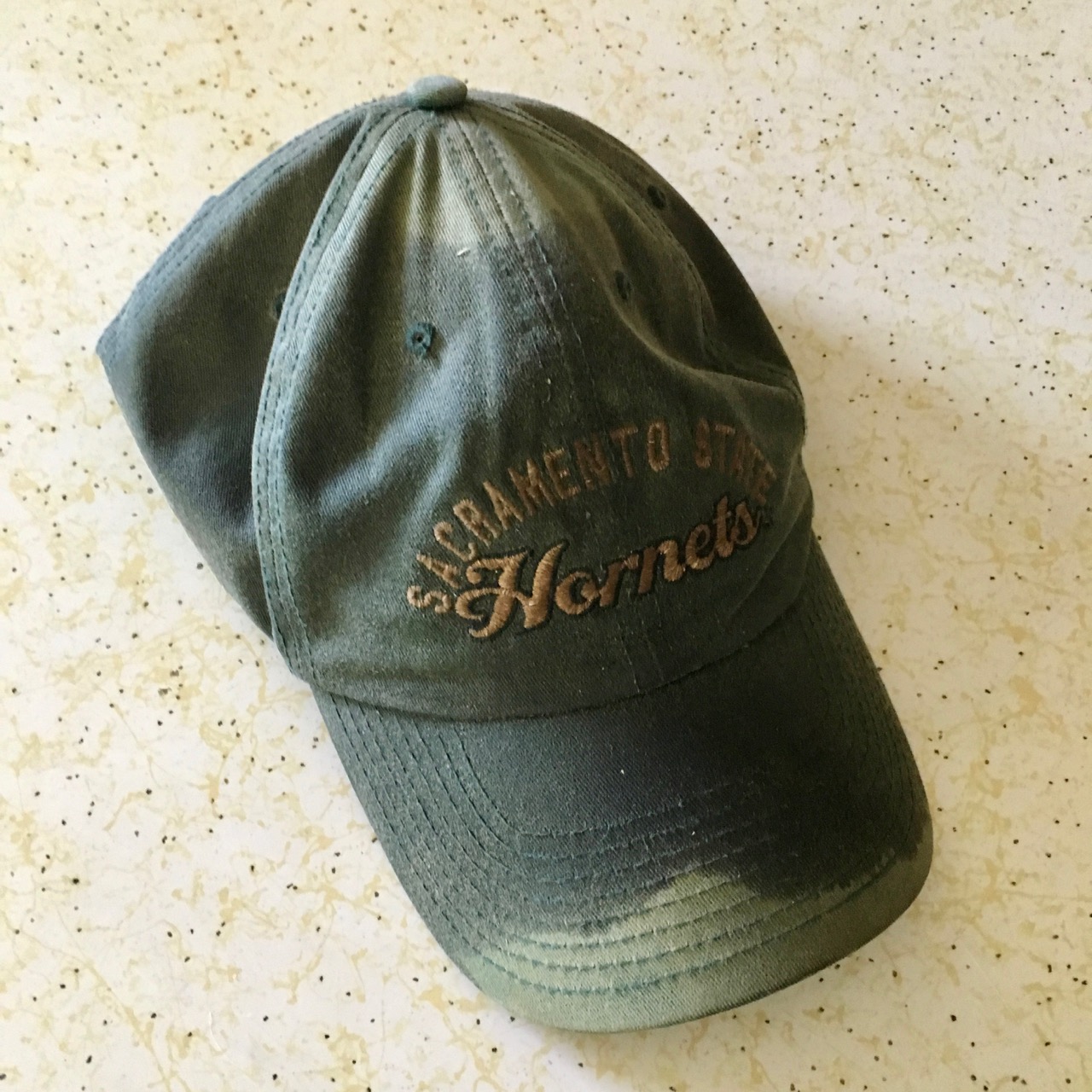 To give myself a 'redemption' test ... I laid my two socks on the edge of the carport so the afternoon sun could dry them out since I washed them. MOST LIKELY this is the same spot I put them back in March after doing the yard work on the corner bank in back of the house.

OBVIOUSLY I forgot I put them out there to dry ... the storm with high winds only 5 days later probably blew the socks in the direction of the Yews under the kitchen window. Heidi never bothered to let me know the socks were there as she would walk past them almost every day as she headed to the front yard from behind the Yews. 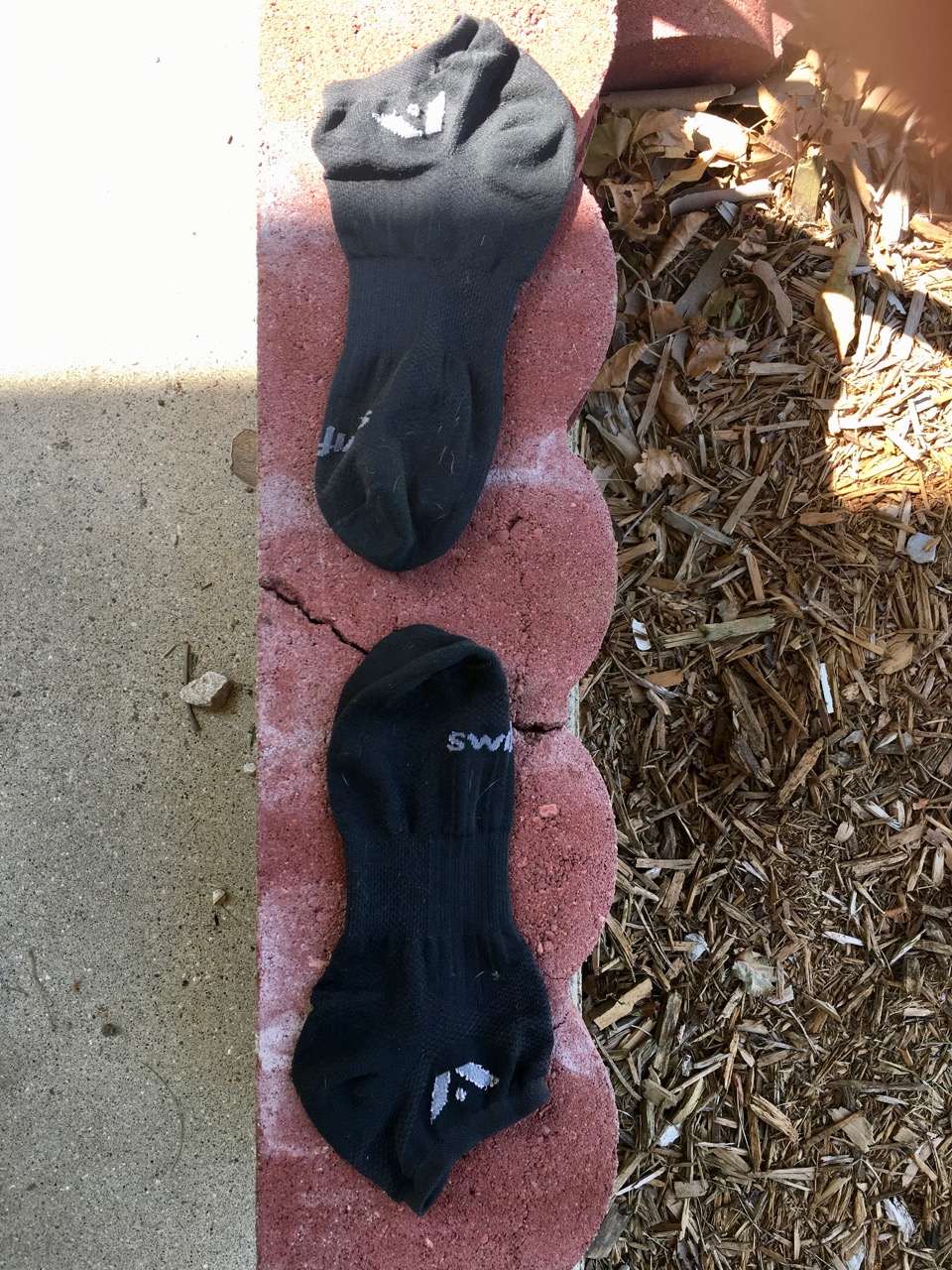 After only two hours of light exercise, just picking up stuff and raking ... my shirt was soaked. Due to the sun's reflection on the iPhone screen I had to take the picture from this angle to keep my shadow out of the picture. If I rotated the picture right side up, the shirt and picture were at a weird angle. 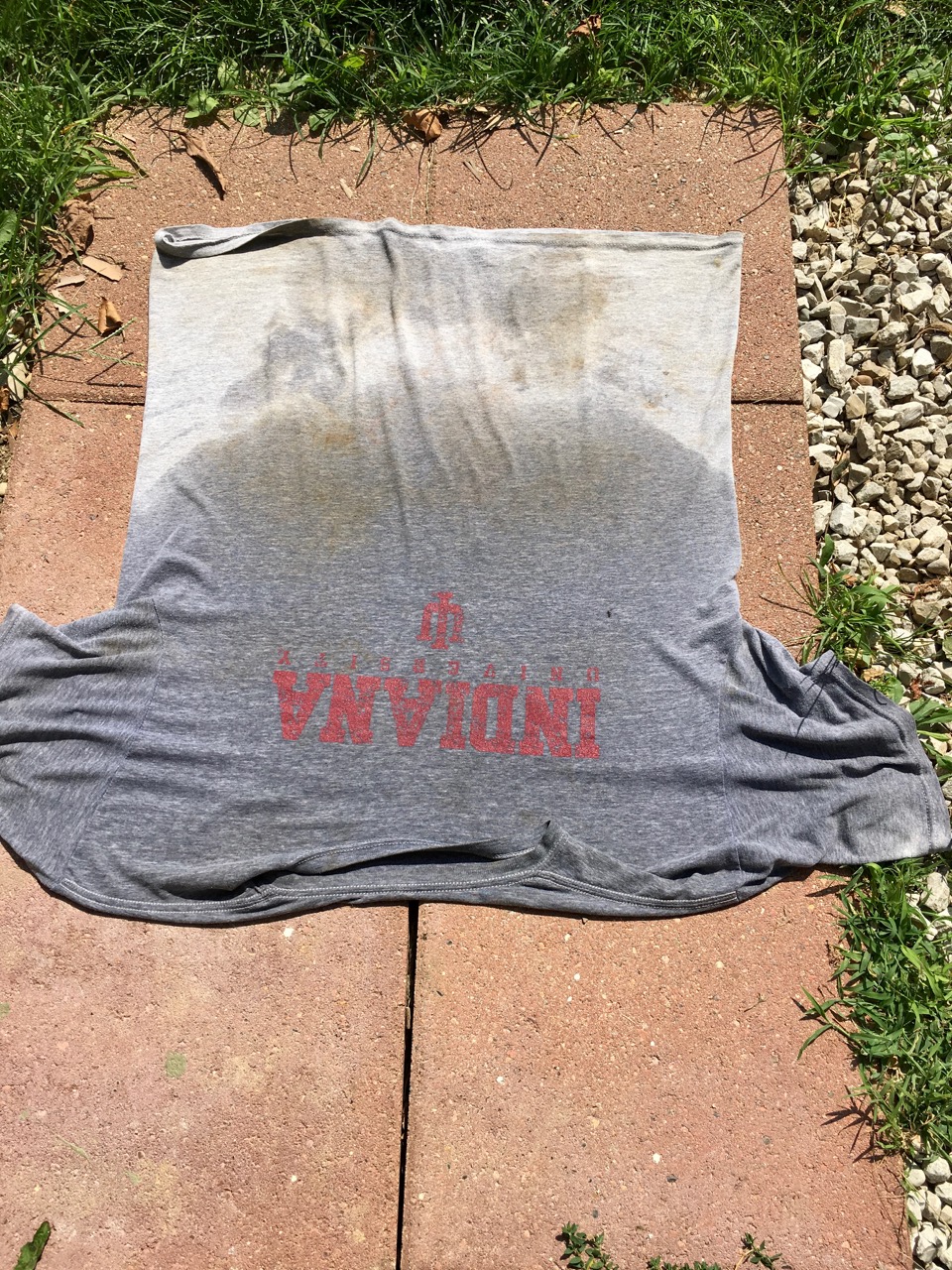 Stella did 'breakout' of the house. After not doing it for many months, she lifted the door lever with her nose and was standing right next to me as I raked the last of the flowerbed. What a surprise that was. I guess watching me through the window was not good enough ... she had to be involved LOL.

I am not sure it it will look good but I am thinking of running solid boxwood hedges, cut 4-5' tall across the front of my carport to hide the cars. Then from the corners of the house to the porch on both sides of the porch ... use the Azaleas's as end pieces, maybe one or two in the middle ... then fill in with Hostas, Lilies and potted annuals with different colors.

The local landscaping business only had Lillies, Azaleas and some annuals today. I realize at least that this is not the best time of year for new landscaping projects. I have other places to check out 25 miles away.

Our second walk of the day may not take place until tonight just as the sun goes down around 9pm. The hounds were "yelling" for lunch when I finished my 2 hour yard work at 11:15am. Heidi was barking non-stop, Stella was howling, Sadie just hopping around .... ALL wanting their lunch.

Then a MINUTE after they finished eating, I started to take them outside but noticed all three hounds were sound to sleep within a foot or two of their food bowls. All was well with them ... food and sleep.

Thanks for all the emails, comments, pictures and links to help with landscaping the front of the house. If flowers were sports related I would know what to do ... but I never have answers when it comes to what or where in landscaping.

Off to make a new 3qt pitcher of ice tea ... those pitchers of ice tea are not lasting long right now.

Typical hot weather this time of year in 'the tropics' of Southern Indiana.
By Steve at 12:48 PM