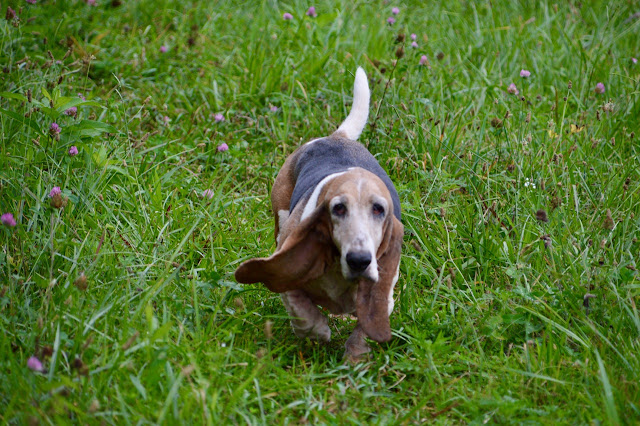 I would have to do some deep digging back through Heidi's folder of pictures to see when the last time she made two complete walks in the field on back to back days. I know my short term memory might be on shaky ground at times but I am positive it's been YEARS since Heidi did two walk in a row. Today she even led the walk.


While I sat in front of my computer most of the day trying to find just the right blog template that I wanted, the skies never changed, it never rained and the best decision of the day was keeping the Reds game on tv in the background. After returning from our afternoon walk, the Reds were behind 13-3 with 3 more innings to go. It took little effort to press the "off" button on my Directv remote. 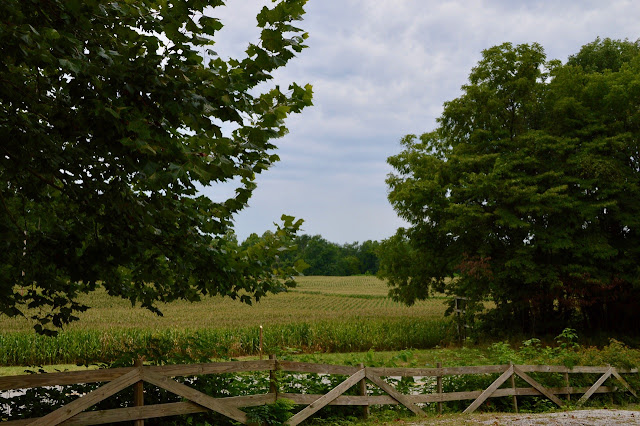 During the normal trip outside after the hounds had their lunch of kibble, Heidi had moved back to her regular routine of walking along the side of the house where the Yews use to be, then darting or jumping out into the front yard to relieve herself. She was moving so fast the camera barely caught her running from the yard to the driveway. 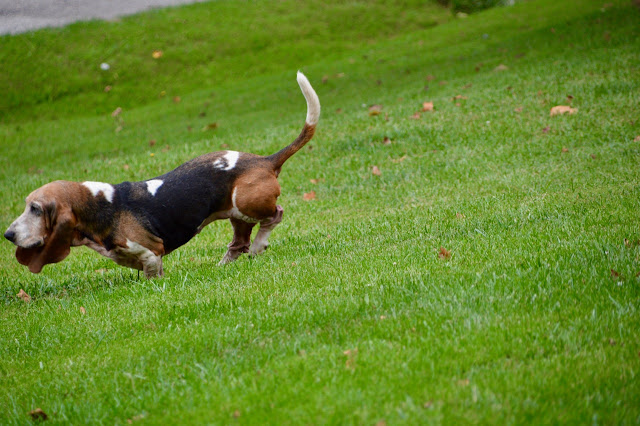 With the driveway incline that would put me in fantastic shape if I spent time just walking back and forth up the hill a few times daily ... Heidi went from a fast run to a slow walk. She had other plans for her energy that I was not aware of. 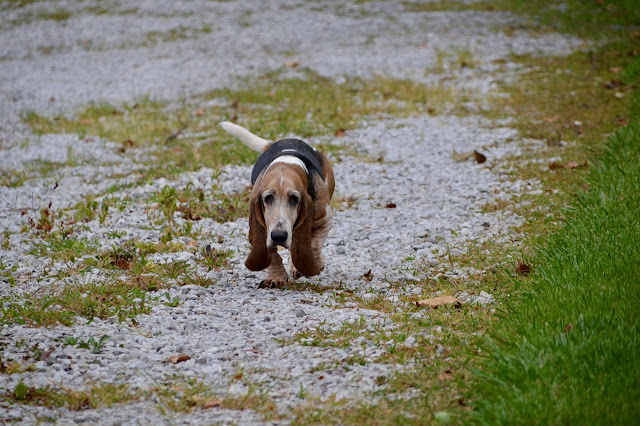 By 3pm I had come to a final decision on the blog design, answered some emails and replied to blog comments ... Heidi thought it might be time for our afternoon walk. She stood and thought about her plan before making any abrupt moves. 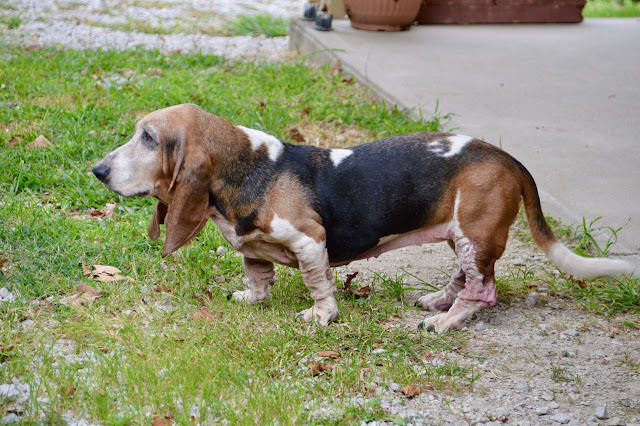 Within seconds of being outside Sadie was already running through the field chasing butterflies and Stella was slowly walking up the path trying to get the walk started. I think she would have liked to stay inside and sleep. 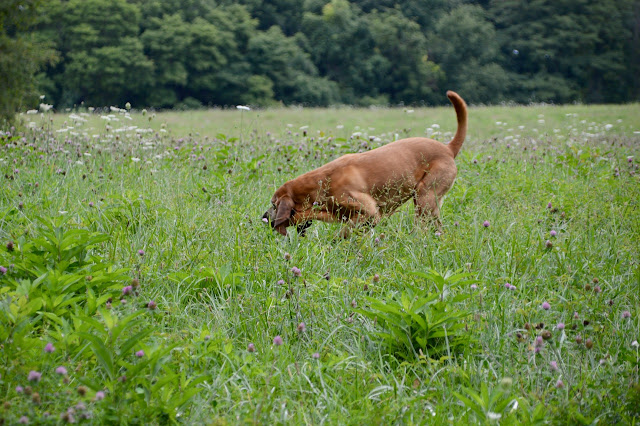 I could tell soon after stepping into the field it was going to be one of the biggest challenges of my week to keep these three hounds moving in one direction. I think it all has the possibilities for a super bowl commercial some time. 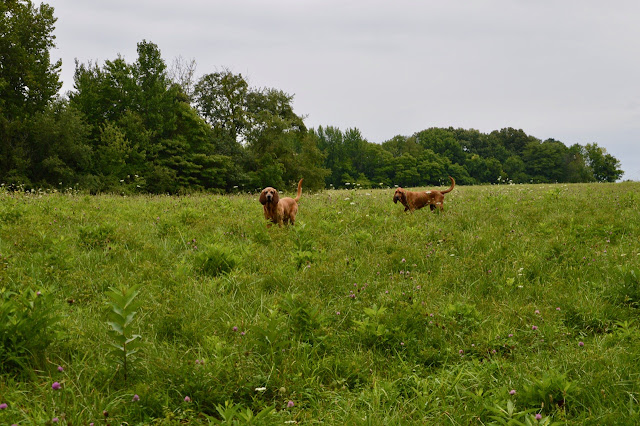 Here is one butterfly that ignored Sadie's fast running and jumping at air trying to catch them. She stayed here and enjoyed her meal on the Butterfly Milkweed. (Google Images is a great invention) 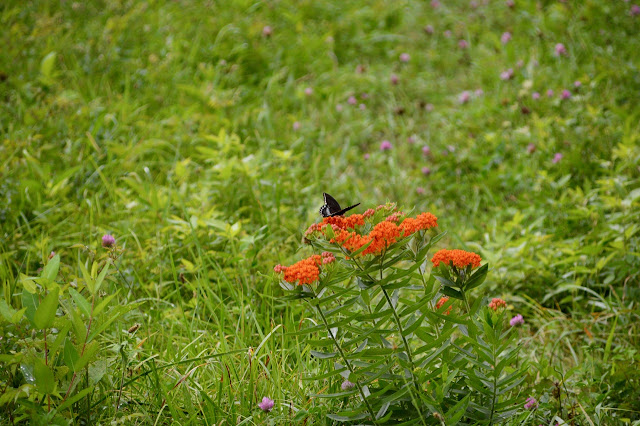 I was still in shock that Heidi was not only on the walk but was not lagging back with other interests such as following her nose. She acted as if she was on some sort of mission today, she had a plan. 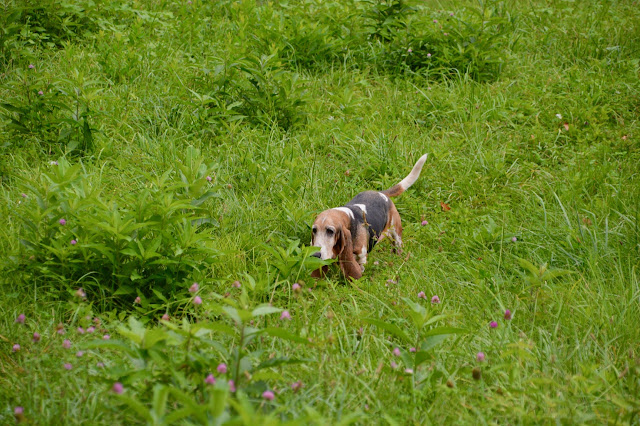 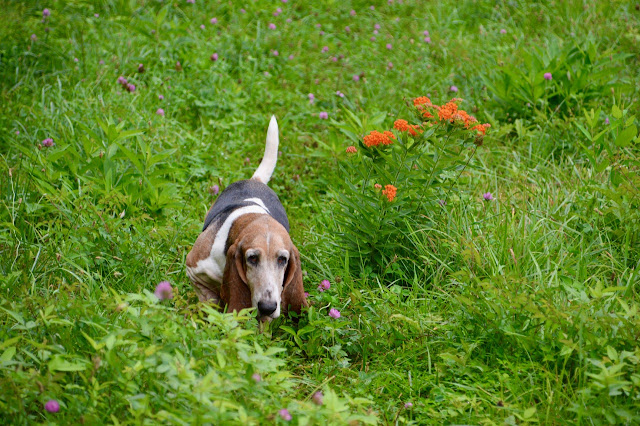 With the start of the walk is a slight incline almost all the way to the first corner, there was no running involved. That would be using energy that she planned on using later. 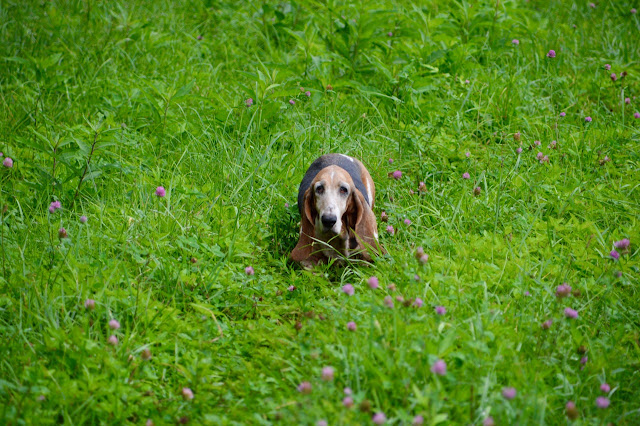 While I was looking in both directions you could tell that Sadie and Stella had joined as a team to cut this exploration today into an effort of more coverage in less time. When they are in this kind of pose there is only one thing that will break their concentration ... mention the word 'food' or anything that is food. 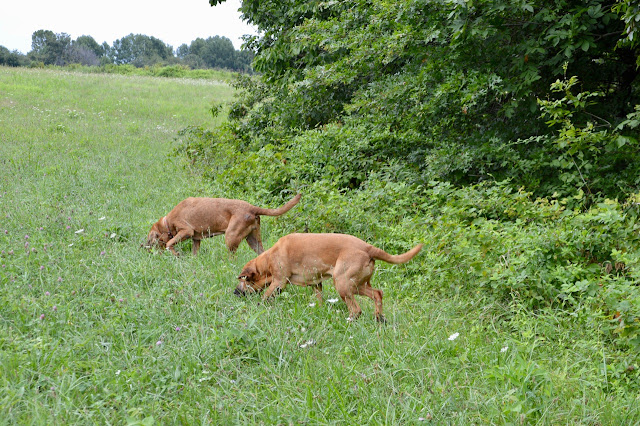 As with any basset hound worldwide, anytime you are looking at pictures you can't tell by their legs if they are running ... but their ears are a dead giveaway. 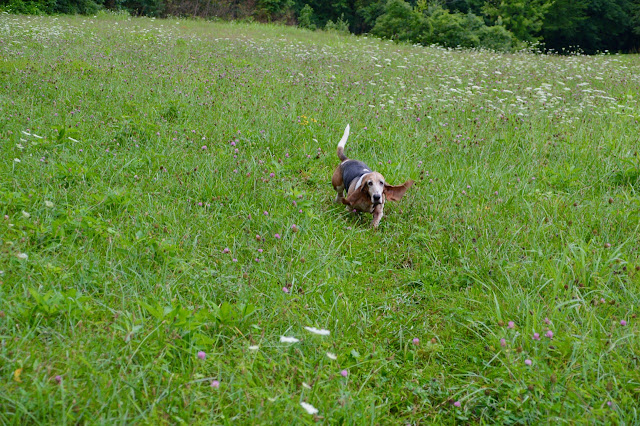 I did not even call her when she was running ... it was just part of her plan. 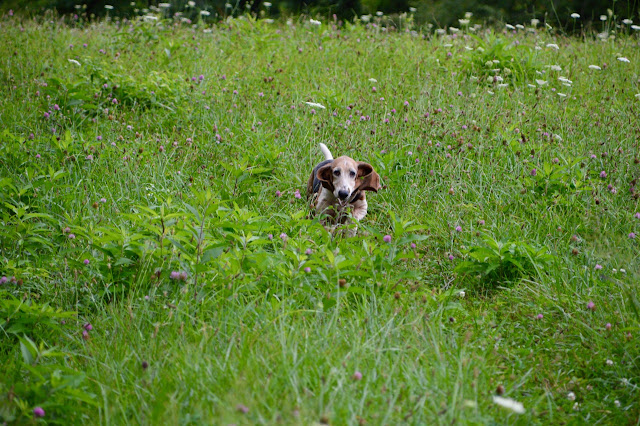 While I was waiting for her to catch me, I had noticed that Stella was walking away from all of us in a northern direction which would be toward the center of the field. After taking this picture of Heidi I turned my view towards the middle of the field and Stella was nowhere on the horizon. Zip, nada, ... gone!! 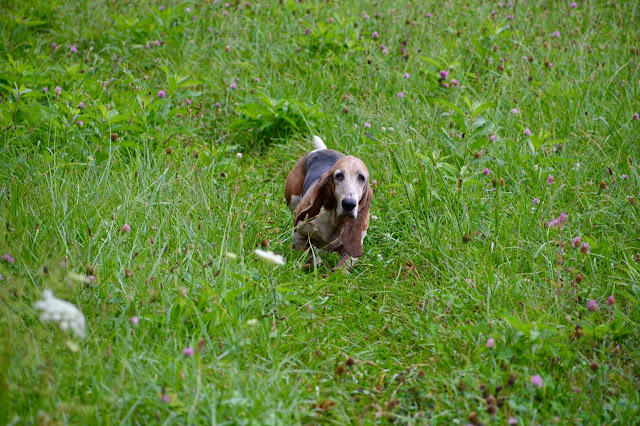 Some how in a short period of time Stella had changed direction and went the opposite way, moving behind me either running or trotting and letting me find her not in the field but up in the far right corner and heading into the gully where the deer migrate. 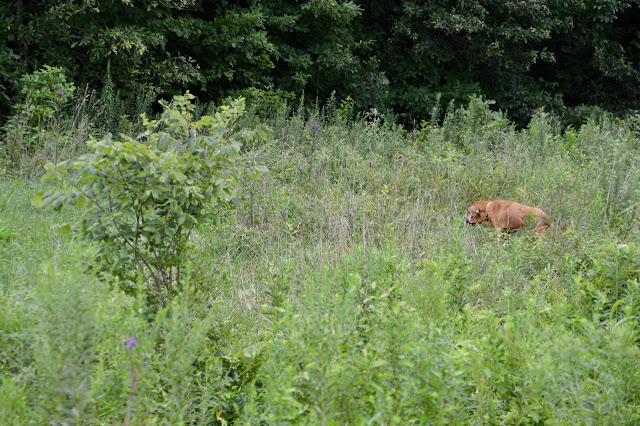 While I am trying to keep Stella and Sadie from going down into the gully through that overgrown brush ... in fact I am running in their direction calling their names for them to stop ... Heidi continues her pace and is way out in front of all of us ... she is leading the walk! 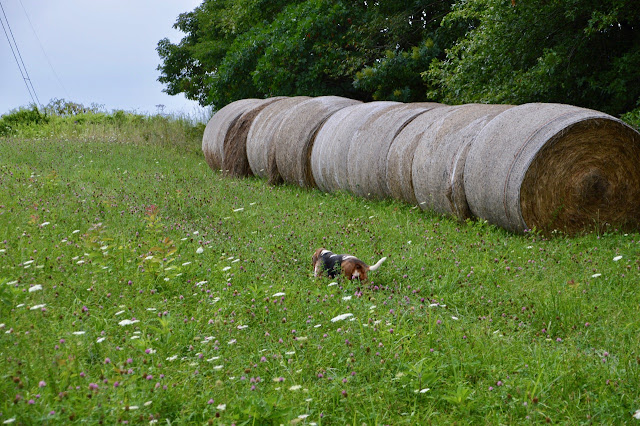 Somehow, some way I was able to get Stella and Sadie out of the brush and headed in the right direction. After all the running I did chasing them, I guess Sadie had to check to see if I was okay and not laying on the ground somewhere.  HA 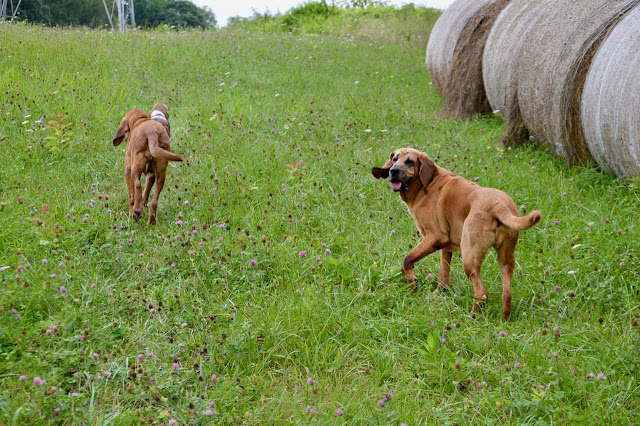 I don't feed the brand name 'Milk Bone' but one similar that has better ingredients. But I do say the brand name "Milk Bone' because they all respond to those two words and know they will be getting something to eat. Here Stella is asking if she just heard what she thought she heard ... "did you say Milk Bone?" 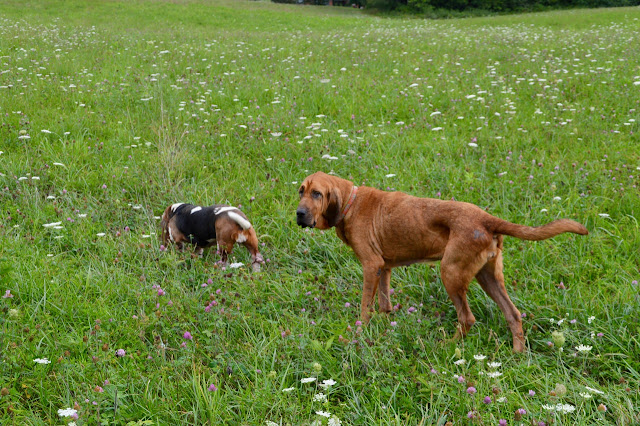 When Heidi heard those words she took of running, Stella kept walking her slow pace as usual and Sadie was about to fly by my knee in a full-out sprint. They all had a new focus now and it wasn't walk or searching ... it was food. 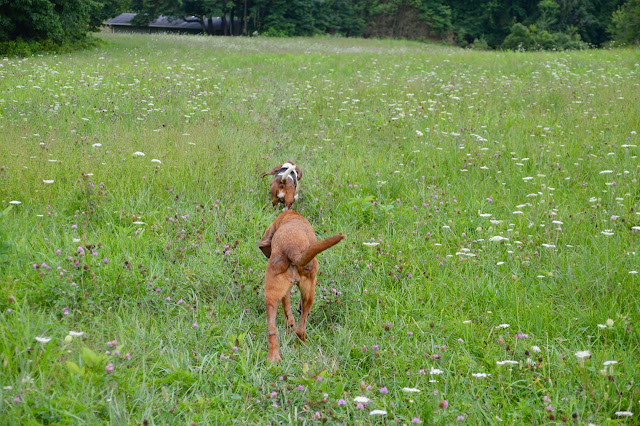 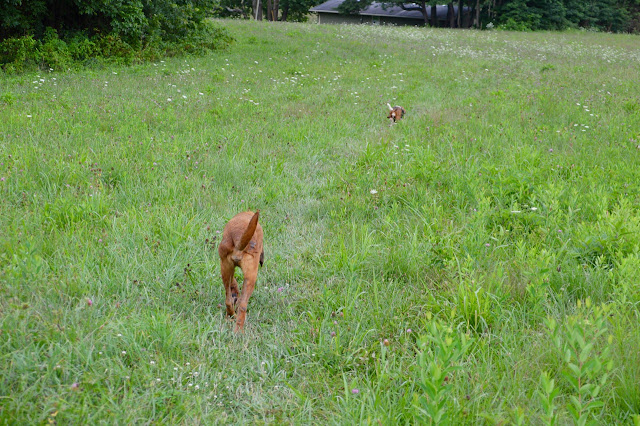 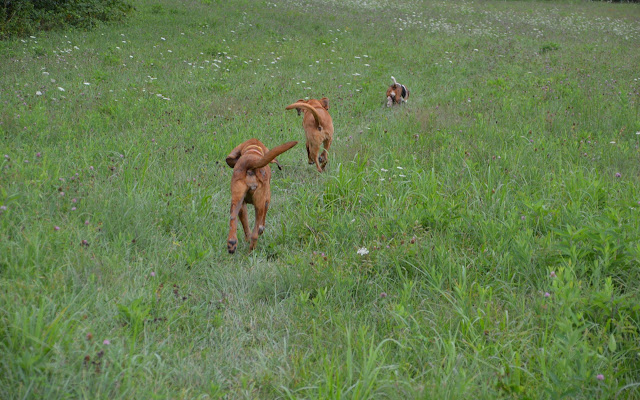 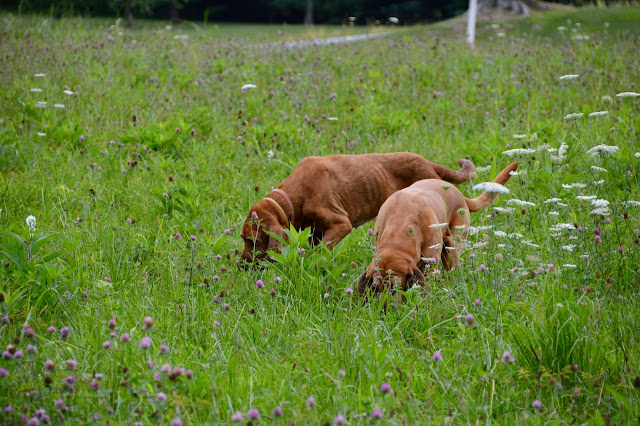 Heidi was wagging her tail headed for the door. She was already barking for her 'Milk Bone' by the time Sadie and Stella reached the house. 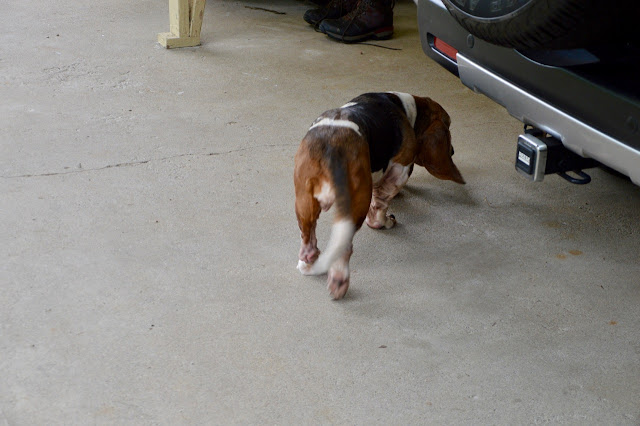 How can a hound look so sad when there is food involved? 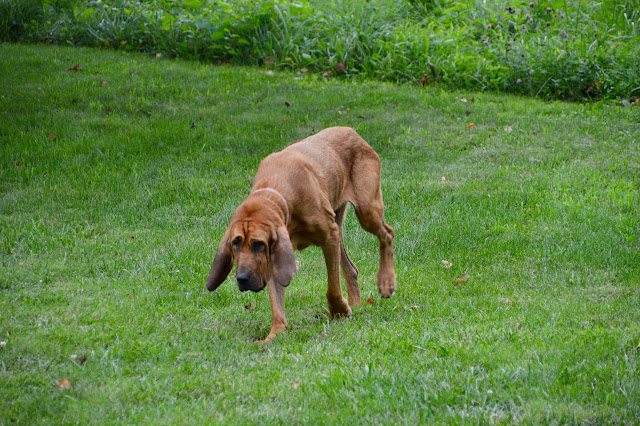 Some readers in the past have asked me if having three hounds make times noisy around the house. It's just the opposite. Once they get their walk finished or meals, they fall asleep and the only noise I will here will be a ocassional snore or breathing behind my desk chair from Stella.

With the change to this blog I am now posting photos to only one site instead of two blogs and Facebook. It makes it much faster to post and gives me more time away from the computer. I keep finding things to use in the background to use for the blog and as I use this platform more, the easier it is to post.

Like I said at the start of this post, I have finally decided on the blog design. I liked having that header image where the other blog did not have that option. I like the home page where you can still see the 12 previous posts with a clean modern look to it. The pages are where I wanted and once I found out that all the links I used in the sidebar of the previous blog design this morning, would be there once a post was opened ... then I knew this was the template (theme) I wanted to use.

The name of this free Wordpress them is "Baskerville 2".

Speaking of change ... I forgot to mention the change Apple made to their new iMacs has not turned into the hassle I thought it would be for me. When they made the computer thinner, the slot for the SD card moved from the side to in the back. How inconvenient could that be?

I thought I might have to use an older adapter that would take five different SD card sizes but after 3 months from replacing my almost 7 year old iMac, I find having the SD card slot in the back not a problem at all. I do have to lean a little further from my chair to reach the back of the iMac, but not a problem.

Of course there is always something I wanted to say at the end of the post but by the time I get there, a lot of times I forget what it was. For example I've been wanting to talk about that SD card slot for weeks and finally remembered today.

Is is just me or have the first 6 days of August flown by? I don't want summer to end. The other night at 3am when I woke up to shut bedroom windows because the temps had dropped into the 50's ... it hit me that fall was just around the corner.

I'm not ready to put jeans back on, along with a jack or coat.

It's nice to have all the changes finished these past few days. It's been a 'wild' 30 days when it comes to changing stuff.

All is good in 'the tropics' of Southern Indiana.
By Steve at 9:47 AM