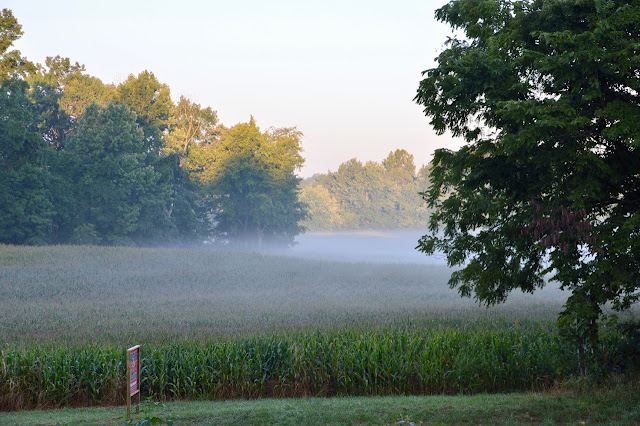 It was perfect sleeping weather with the windows open and the temps in the low 60's. What that led to was me putting on a sweatshirt for our morning walk. The old thermometer needle in the carport was barely touching 60°, so I decided the worst that could happen would be that I'd get to hot on the walk. I found out it was needed. 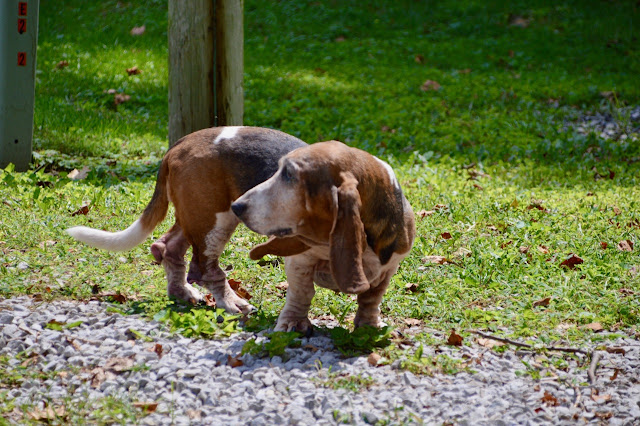 I didn't get a second post in yesterday, based on our afternoon activity. Heidi did nothing but this after lunch and then headed back to one of her three spots to sleep. Two field walks in back to back days takes a toll evidently -- so she changed her workout strategy yesterday, getting exercise only when she walked to a different place to sleep. Corner of living room -- couch -- Sadie's big leather chair. 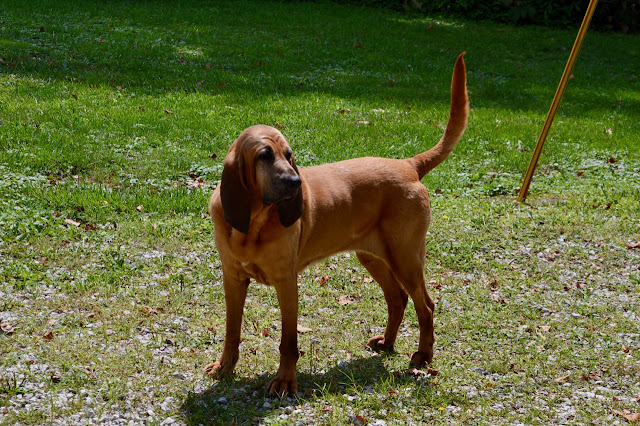 Sadie checked yesterday afternoon but didn't move much further than this. She wanted to sleep and headed back inside without complaint when I said "come on". She was asleep within minutes inside. 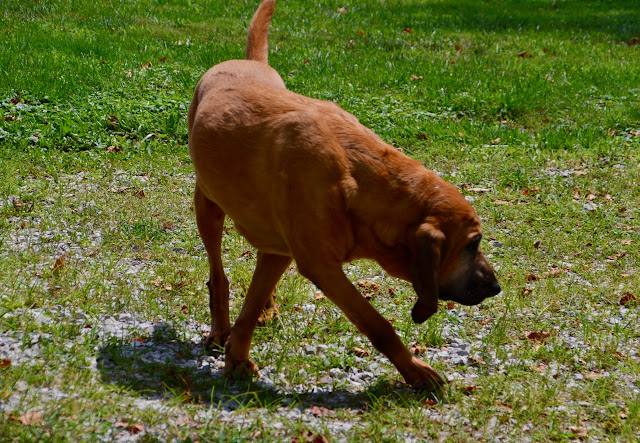 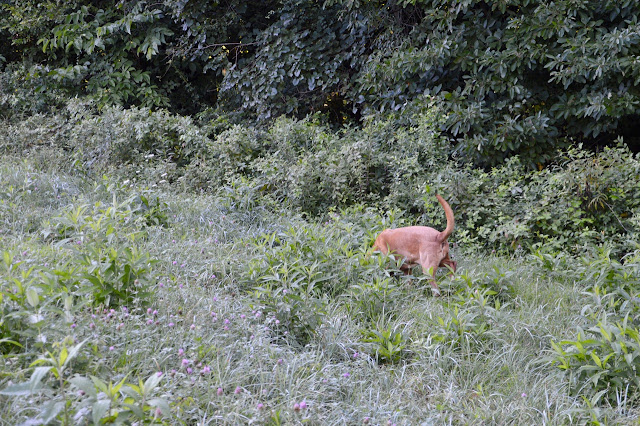 This morning was different. As usual Sadie was off and running to track scent. All the butterflies that she saw Monday morning were not there this morning. She was strictly into deer scent this morning. 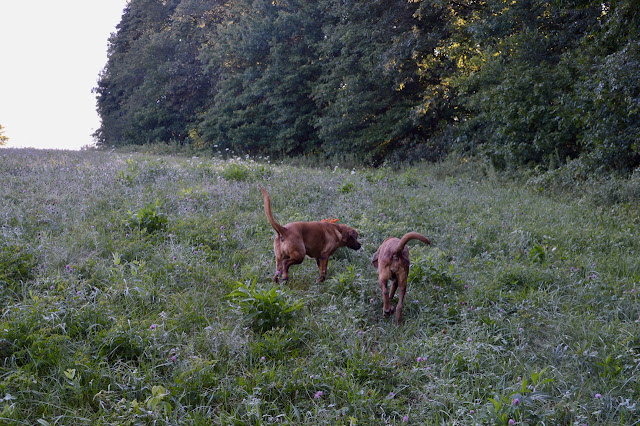 Stella was trotting along with Sadie so that was a good sign. I see I am a little confused today. I can't remember if I put the comments about the photo before/above it or below the photo I am talking about. At least today I am putting them below the photos. Sorry for any confusion. 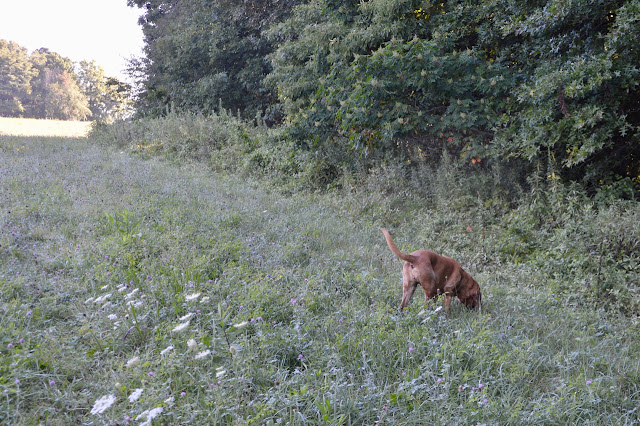 By this time, even though we had just started our walk, I was happy I put on a sweatshirt. The cargo shorts were okay and of course with the heavy dew I was still wearing the North Face snow boots. 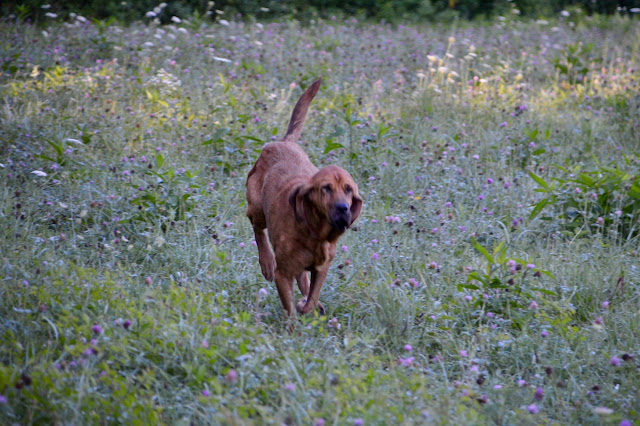 Here is Stella showing some early morning energy. I hope it means that her hips are feeling better. Yet, she did not want to jump in back of the FJ yesterday as I unloaded groceries. 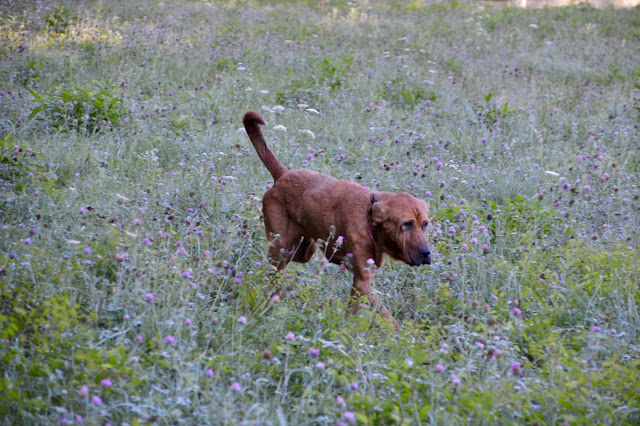 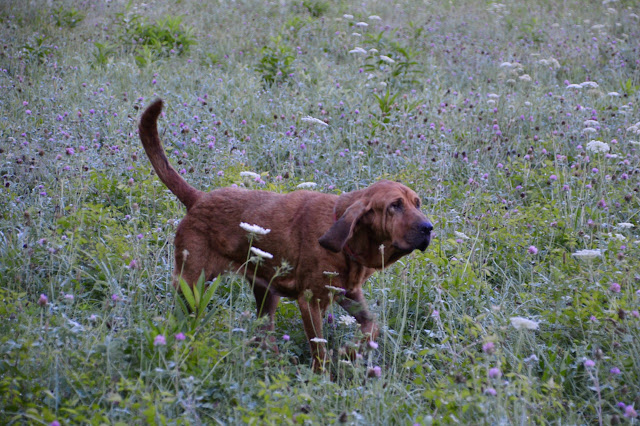 She seemed pretty happy this morning. She always loves her breakfast and howls loud enough it would wake up neighbors if I had any nearby. Then she takes a short nap until our first walk. 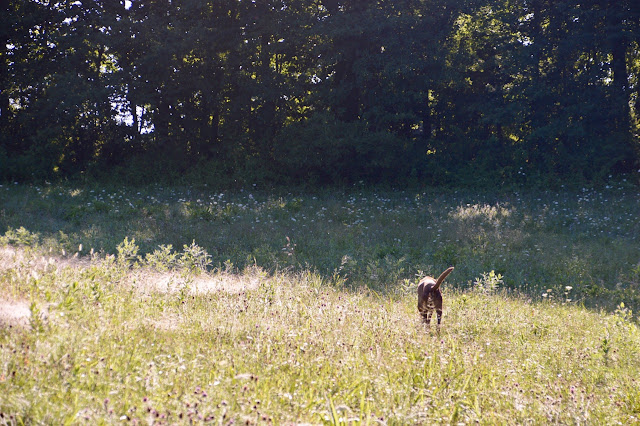 While Sadie was trying to figure out all the noise a cow as making, Stella trotted up the path like she had a plan to go somewhere. 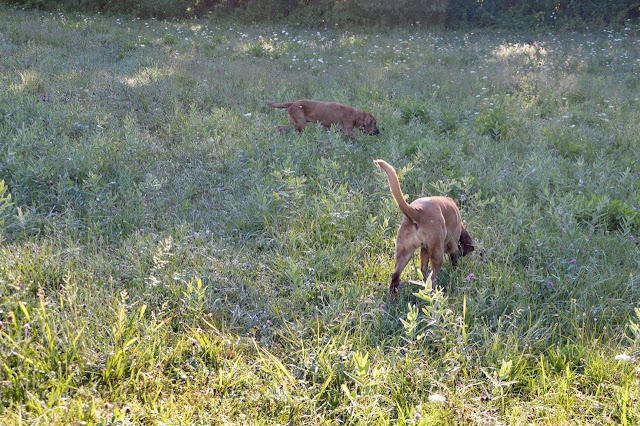 Suddenly she turned a sharp right and was going to join Sadie, heading in the direction of the field. Since I knew the cow was not in her normal area and most likely just on the other side of the fence, I decided to call the hounds back to me to prevent any possible out of control excitement. I am not sure how motivated they would be chasing a cow. 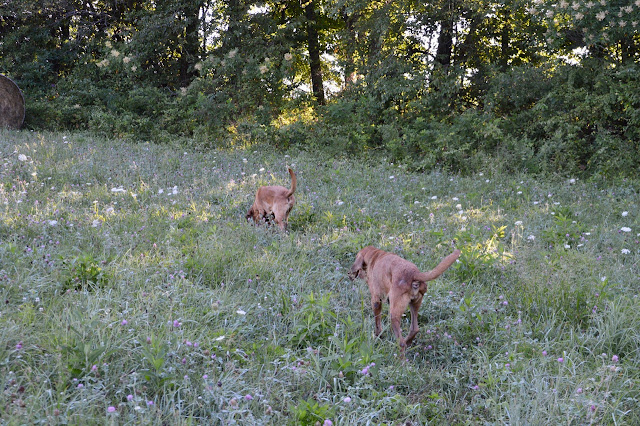 With the two magic words "over here", the both came back to the path to continue our walk. 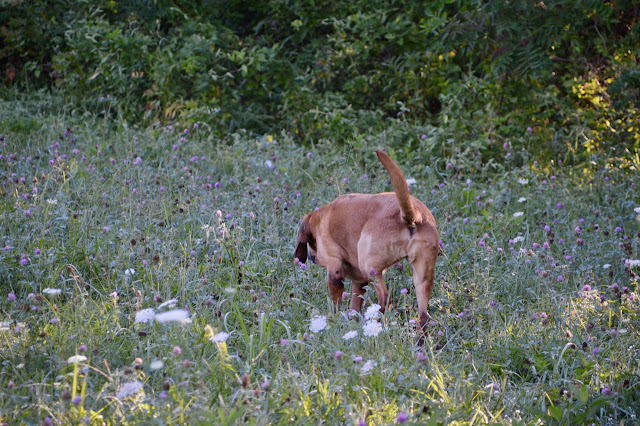 It didn't matter to Sadie. If she has any kind of scent to track, she's happy. 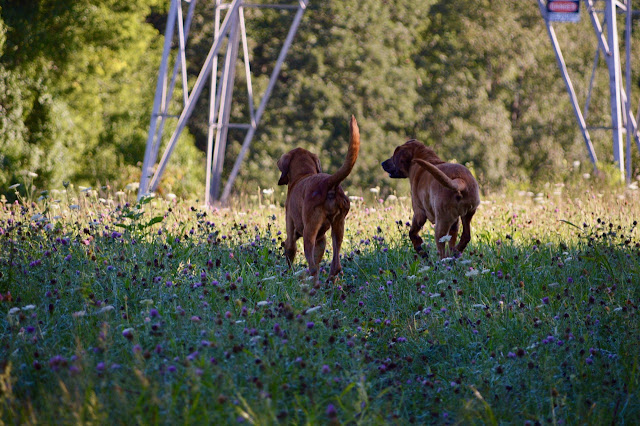 Sadie and Stella took off running, getting pretty far away from me. I could tell they were scheming a plan for a possible escape before I could catch them. I had to use 200mm zoom to even get a picture of them. 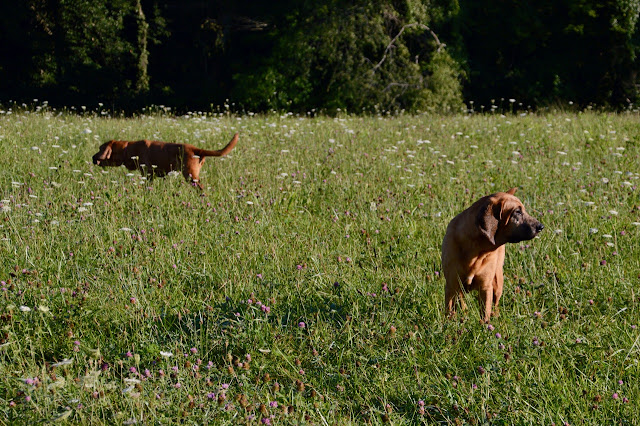 The closer I got to that area, the faster they trotted north toward the woods. When I yelled "hey", Sadie stopped to think about what she was really doing ... Stella kept her pace and kept trotting away from me. 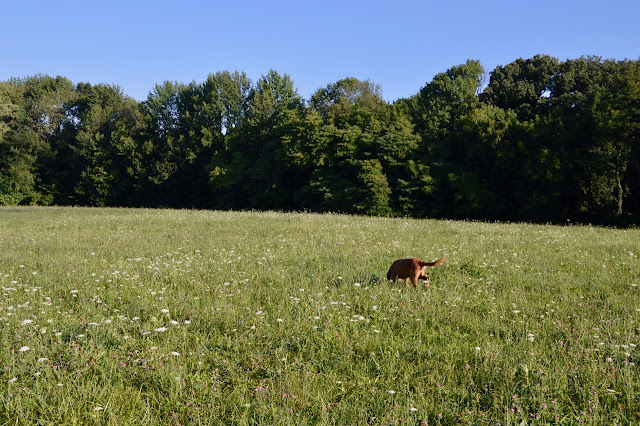 In the past I have let them take off in that direction. The last time it happened they were in the woods and out of sight before I could run that far. It took me a while to find them and a lot of calling their names. After that I knew I had to keep them from doing that. 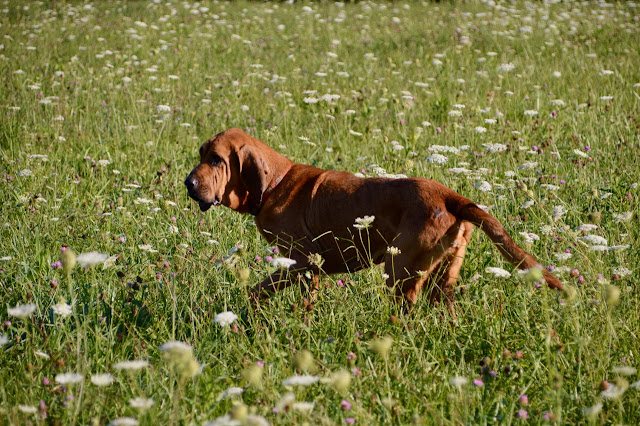 Again, when I yelled "over here", Stella turned and headed my direction. 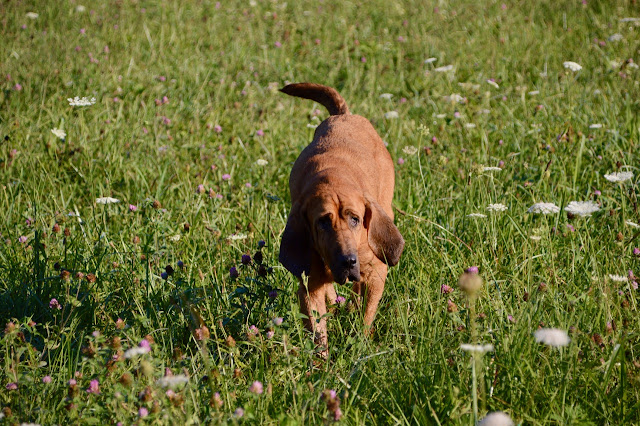 But not before giving me her normal grumpy look for being told to go a different direction than her nose leads her. 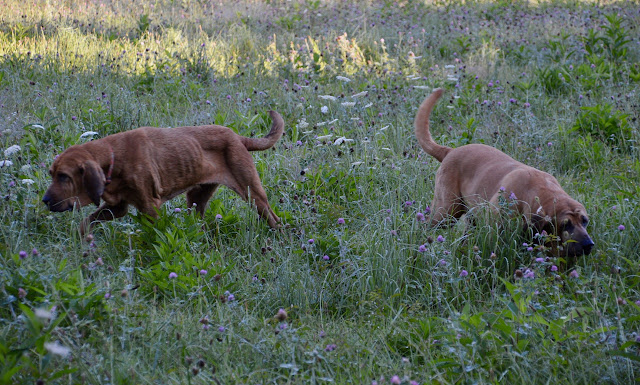 They gradually headed in the right direction, although very very slow. 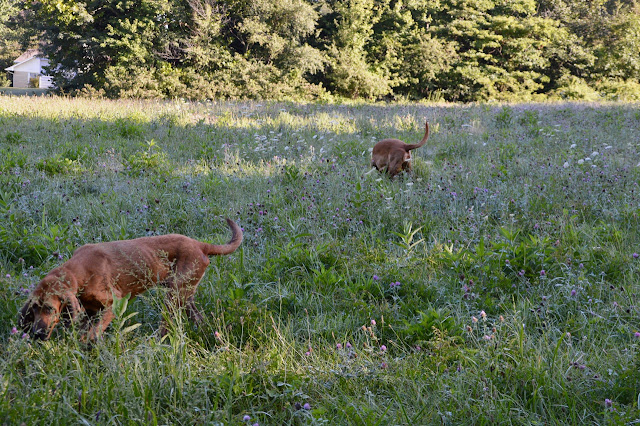 It was Sadie this morning that didn't want to come home or inside. Normally that is Stella but today they traded places. Even in the way they came home. 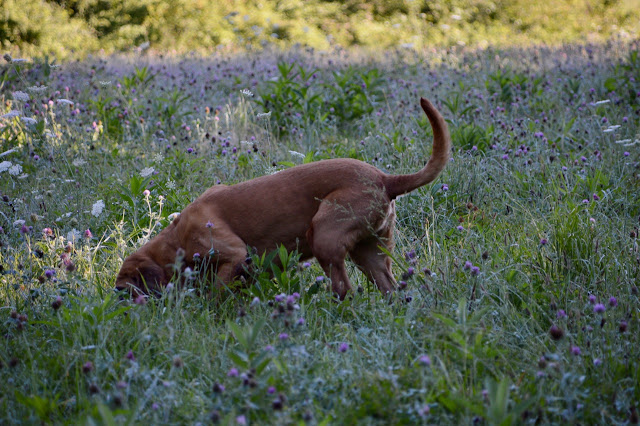 At first I thought Sadie had found a butterfly or deer scat. 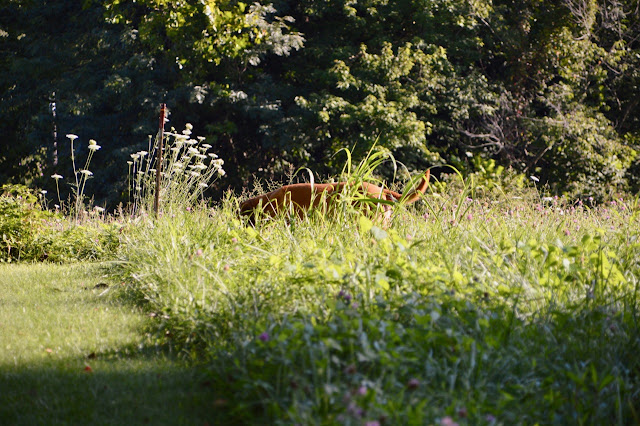 Following her path I realized that it was the scent of the field cat she had locked into. 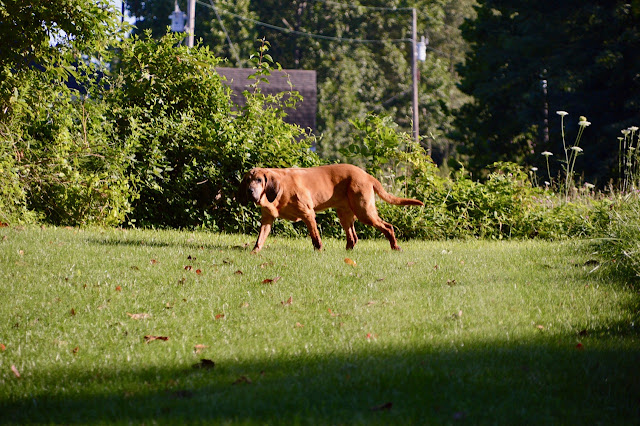 While Stella walked next to me into the yard, Sadie took Stella's normal route ... just inside the north property line pole. 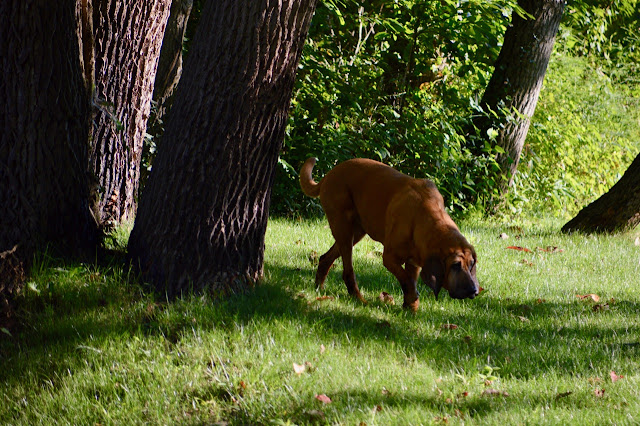 Sadie still did not want to come in ... that field cat scent must have been strong. She is one that I can let out on her own. She might end up pretty far away in the field but always within view from the house. Stella on the other hand would be next door in a matter of minutes.

We did do a second walk yesterday but without the camera. Stella had 25' of freedom with the retractable leash attached to her collar. Most of the time she is never much further than that from me but the leash kinda helps keeps her focused on direction.

With the food pantry re-stocked and a new 40# of dog food (every 17 days) ready for their Wednesday breakfast ... I didn't have many other places to go. With a lot of highway construction locally and now tearing apart the major intersection downtown for rebuilding it into a larger one, the Z4 will have to head south this afternoon for our drive.

Thanks for all the positive feedback by making a comment or sending me an email, about the 'new' blog. I like the change also and am happy I finally decided on a design I liked.

I wonder what the weeks ahead will bring with some fantastic weather on the August forecast and temps blow normal averages.

It's another great, sunny day here in 'the tropics' of Southern Indiana.
By Steve at 4:27 AM