Hounds Will Deal With Rain Today 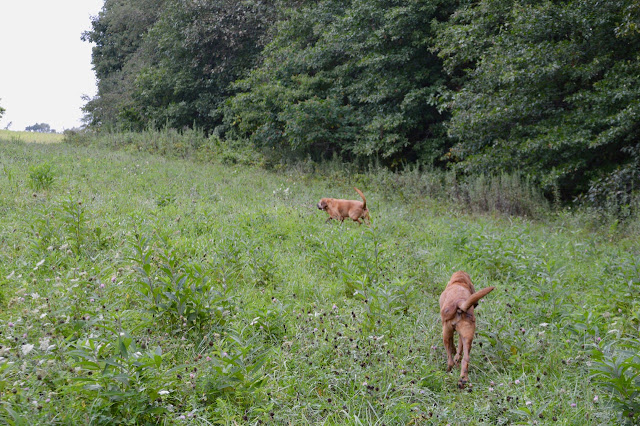 I guess with all the eclipse excitement yesterday someone is allowed to yawn while they do their morning stroll. Or was it that I had a different sleep schedule last night, where the hounds moved from the living room to their bedroom spots around 5am. I'll get to that story later. In the meantime they just finished their morning walk this morning five minutes before it started raining.

Even though we moved at 5am, they had been sleeping all night in their normal living room spots while I worked on my computer. I was still able to get a little over 3 hours of sleep which put their breakfast kibble before 8:30am, so they were fine with that. Weather radar was showing there was no time for two cups of coffee before a walk ... so a 30 minute break after they ate, we headed outside. 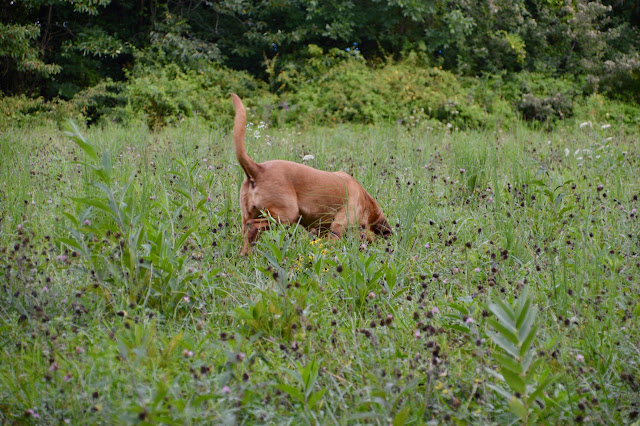 Sadie was going all different directions in the field, too fast to catch on camera ... or was it too fast for me to react with my lack of sleep? 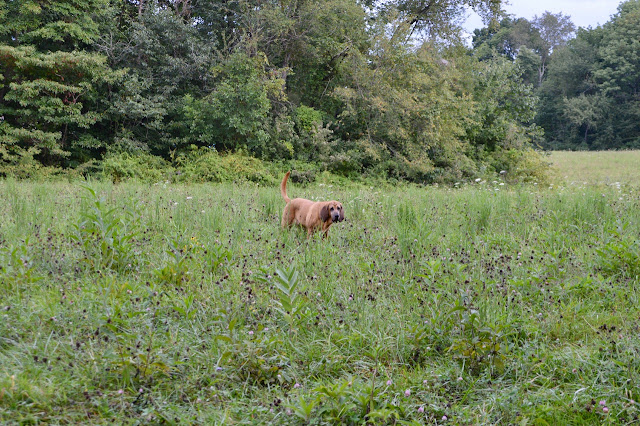 She checked with me often to see if she could roam on her own or were we in a hurry to beat the rain. 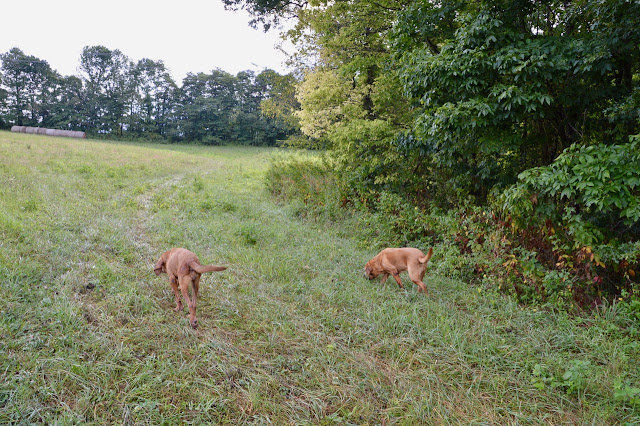 Even Stella picked up on the urgency to keep going because you could feel that rain was in the air. I guess that is to be expected after a day of history taking place yesterday, although not really witnessed where we sat in 'the tropics' of Southern Indiana. 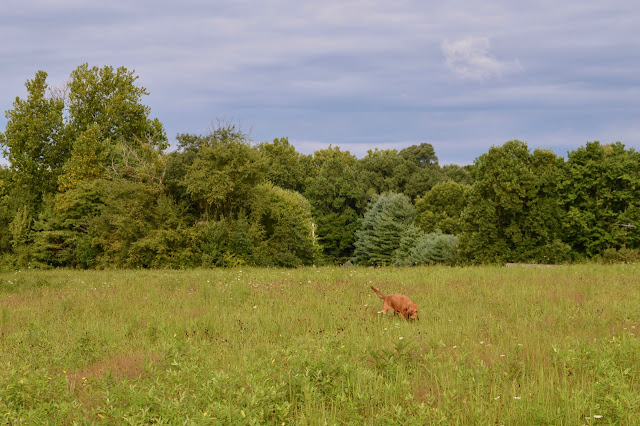 I found out on this walk that I am Stella's best friend when she hears thunder rolling in the skies. She came with a history of fearing thunderstorms when I brought her home August 2015 but I have seen very little anxiety from her when it storms. Yet, this morning when she heard the thunder she didn't waste anytime getting to my side as soon as possible. She trotted quickly across the field to meet me on the path, then stayed next to my side out of camera range for most of the return trip. 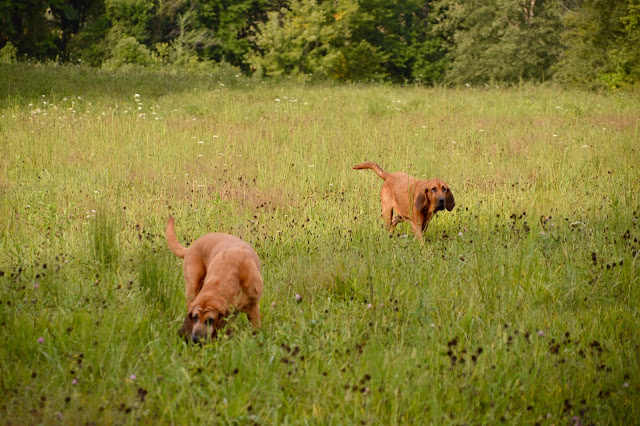 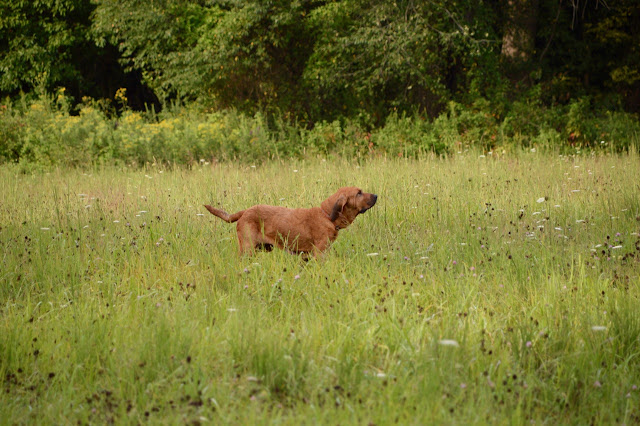 Is Stella smelling deer in the air or is it rain that has her nose pointed toward the north? This about the time the sound of thunder changed her plans. 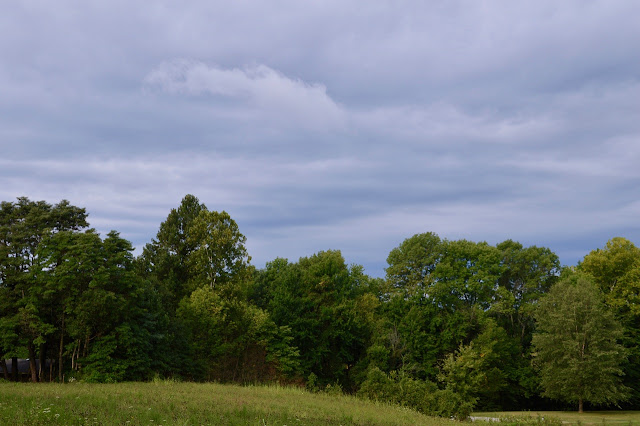 It must have been deer scent she was smelling because the storm clouds were coming from the West, not the direction she was facing. 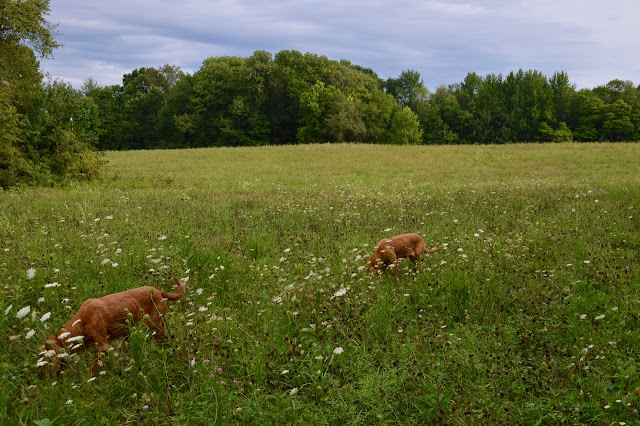 As the thunder continued to sound off, the hounds were never called by name to keep going. They may have searched on the way but they kept up with my pace all the way to the house. 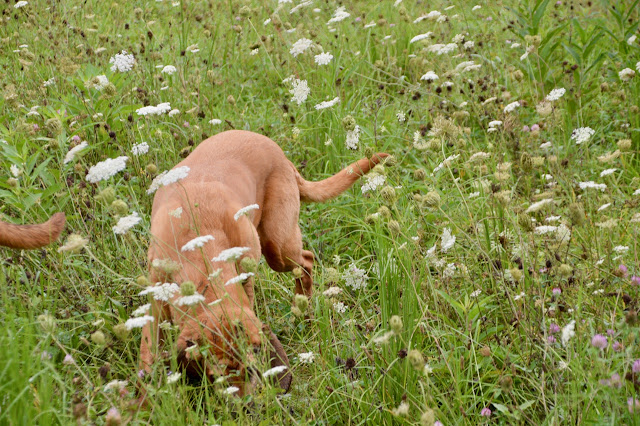 I thought about cropping Stella's tail out of the picture but decided to leave it ... I like to keep the pictures as original as possible, even if they are a bad picture quality.

I'll try to keep this next story short but wanted to relay it to you just to show how 'little errors' can add up to disaster, even if you are experienced doing your hobby. My long time friend from college that is into canoeing, planned a trip in advance, to be on the water during the eclipse.

He spent weeks looking for the perfect starting point of his canoe trip on the Ohio River toward SE Illinois yesterday so he would experience total eclipse darkness while on the water.

He called me late last night to let me know he was one very lucky man.

He told me after thinking about what he had done, he knew he would have never attempted that return trip even in daylight hours ... but was stuck ... he had no choice because even if he went ashore he was so far out in the boonies away from a road or town it would not have made a difference.

He is someone who has a lifetime of backpacking experience in the western states and Alaska. Plus he has rowed his canoe on the Ohio River many times in good weather. He came up to my local lake last fall where we canoed for the afternoon. He is almost at the level of being over causeous with safety before going out on the water ... yet yesterday was much different with a lot of small unexpected changes.

I had thought about it last week but it wasn't until 12:30am last night that I decided to try Apple's new beta version of their new OS called High Sierra. The few times I have tried beta versions in the past I have had good luck with them and no major problems.

I did not have any problems last night ... just a slow download and a super slow install, taking almost 4 hours total.

I will write a separate post about that operating system, so it might help some of you that have Apple computers. Many of you may use your tablet or smartphone to read the blog, so in that case there is a beta version of their new iOS for the iPhone and iPad but I prefer to wait until the official release when trying it on the phone. Right now I have the beta version of High Sierra downloaded on my laptop, not my main computer, the iMac.

After today the rain will pass through, humidity will leave and that weather front coming down from Minnesota will leave us with some nice cool temps to close out August.

I have more reading to do about Apple Numbers so I can convert all of my Excel spreadsheets ... WHY???  You guessed it ... the new operation system will not recognize (supposedly) Microsoft Office product. Although on my beta copy I was able to open my Excel spreadsheets and input numbers.

Busy day here today while the hounds sleep ... all is good in 'the tropics' of Southern Indiana.
By Steve at 3:51 AM