A Rabbit Almost Runs Into Me 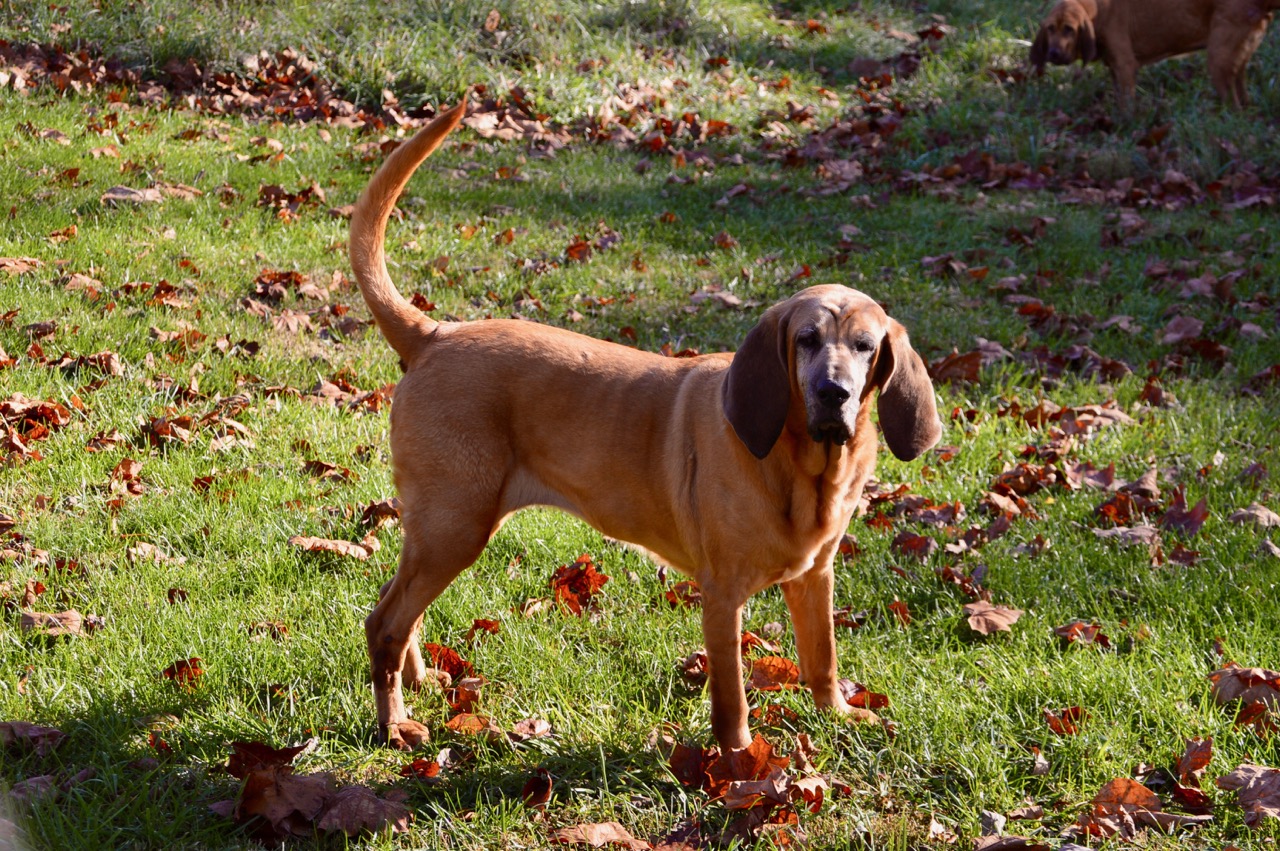 Sadie was beginning to wonder if we were ever going to start our day and the morning walk. A terrible night of sleep led to a late wake up time, thus the daily routine slides down a few hours. Not that it mattered, it was cold even with the late arrival. What was a slow day in 'the tropics' yesterday turned into some excitement this morning.

Okay ... I admit it. In yesterday's blog post I used the word "Russia" in the title to see what kind of response I would get either by comments or by the number of visits. It was slow and in most cases if the post title doesn't have some sort of drama in it then there is less interest. I compare it to the line of traffic slowing down so they can get a look at the accident on the side of the road or the other lane of traffic. Sad but true.

I knew this morning something was up. Sadie and Stella never stopped once they got into the field. I was just an after thought to them. They had plans evidently and I wasn't included. Yet I was the one that saw the excitement this morning. 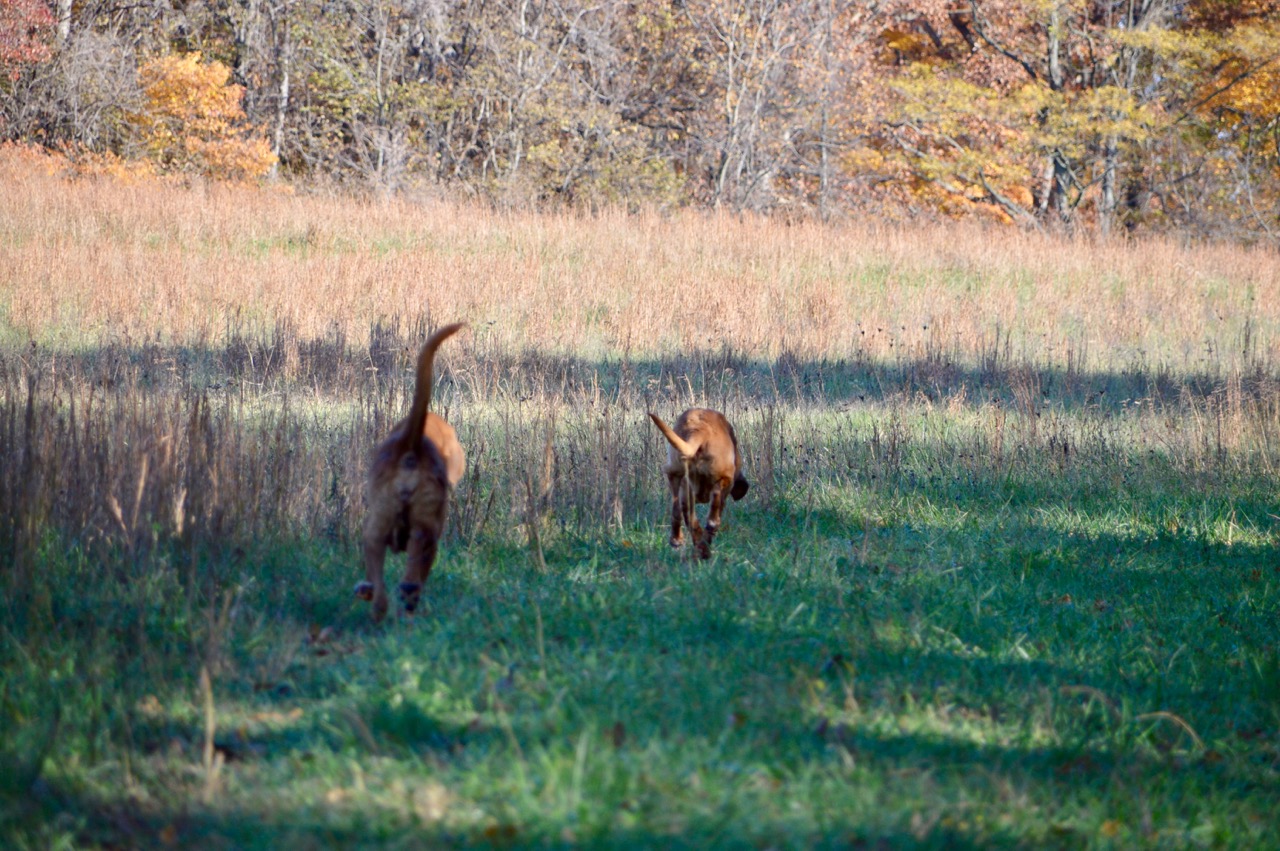 BTW, I'm glad that Ed explained to me that the Russian traffic was actually automated bots, collecting links from outside their domain to improve their traffic. I can handle bots better than attempted hacks to the blog. 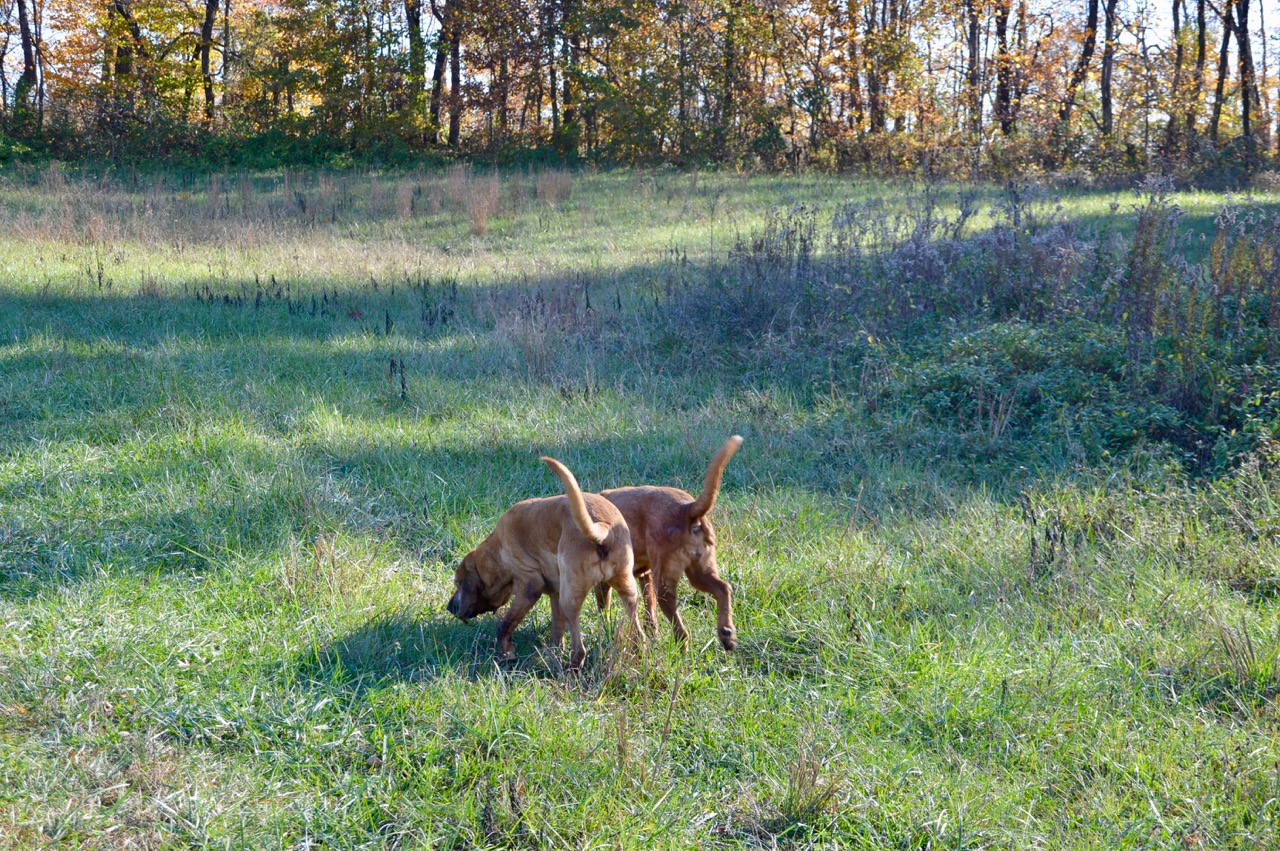 As the hounds charged up the side of the field nonstop Stella was about to head right to the far corner of the field but once she heard "over here", her and Sadie proceeded in our normal direction. Sadie decided she would cover the back of the field for any deer scent ... Stella took control of the middle of the field not quite to the ATV path. 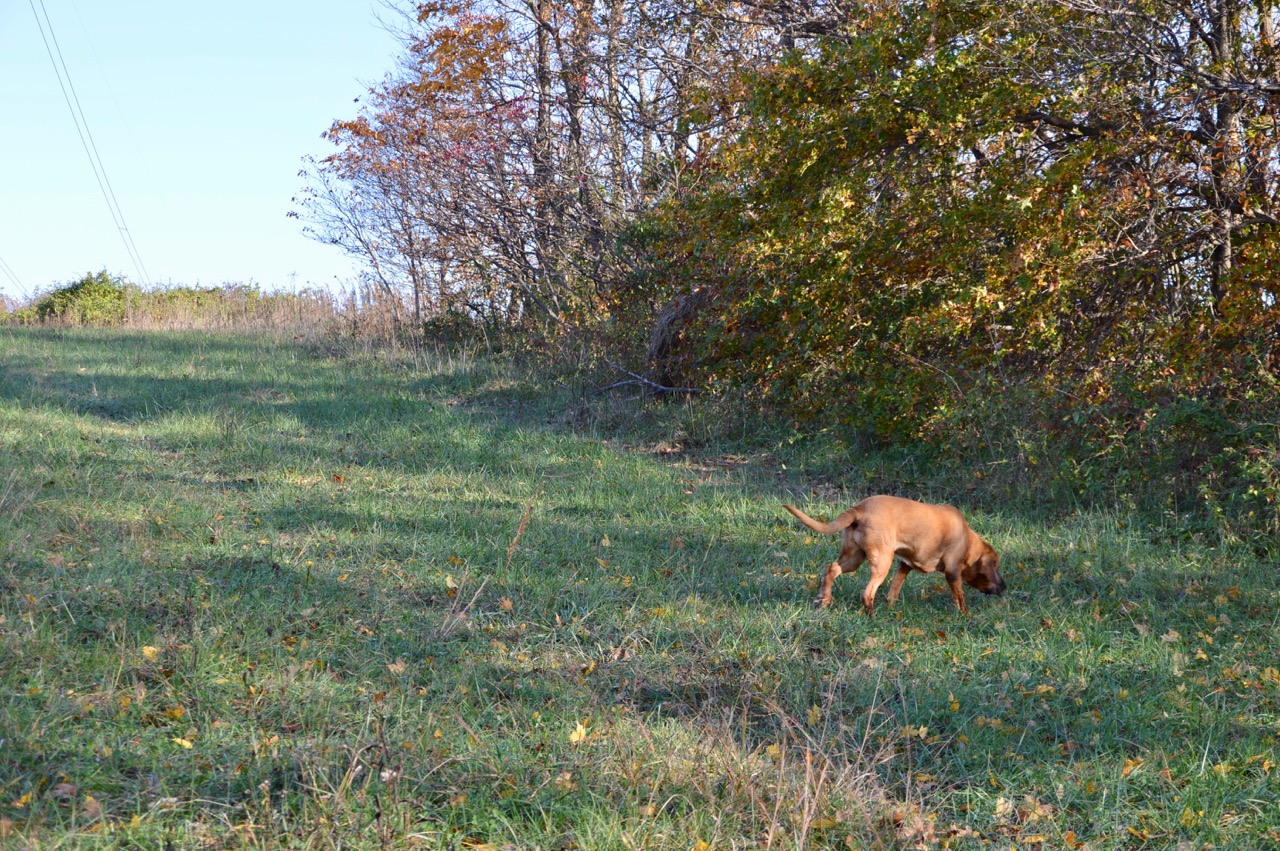 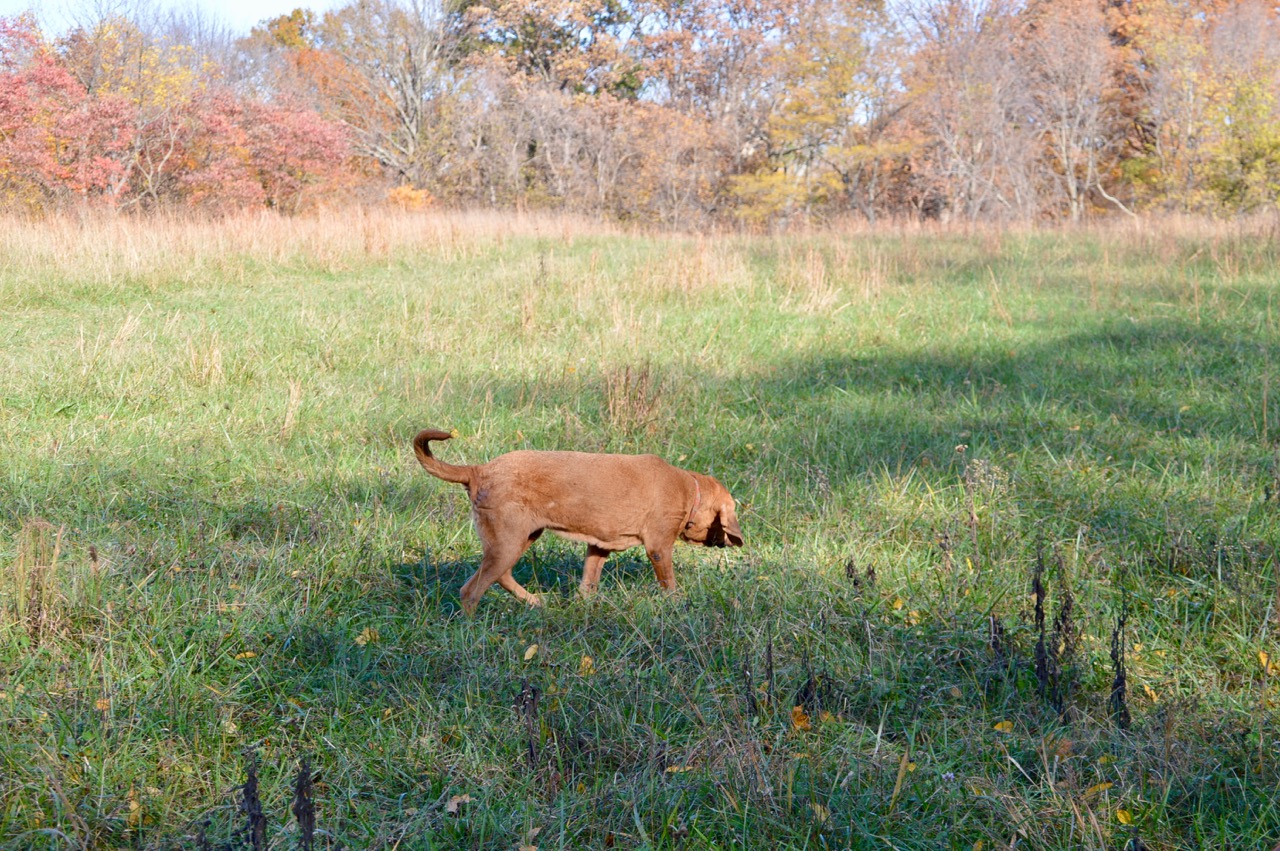 I was enjoying the sunshine, the cool crisp weather. I was happy that the hounds finally slowed enough that we all were on our normal pace. They had not sprinted to the north woods where I would have had to start sprinting if that were the case. So all was good. With the late start I knew the photos would have better color to them compared to the ones we take a few hours earlier. Plus sunshine is always more helpful than the dark overcast skies. 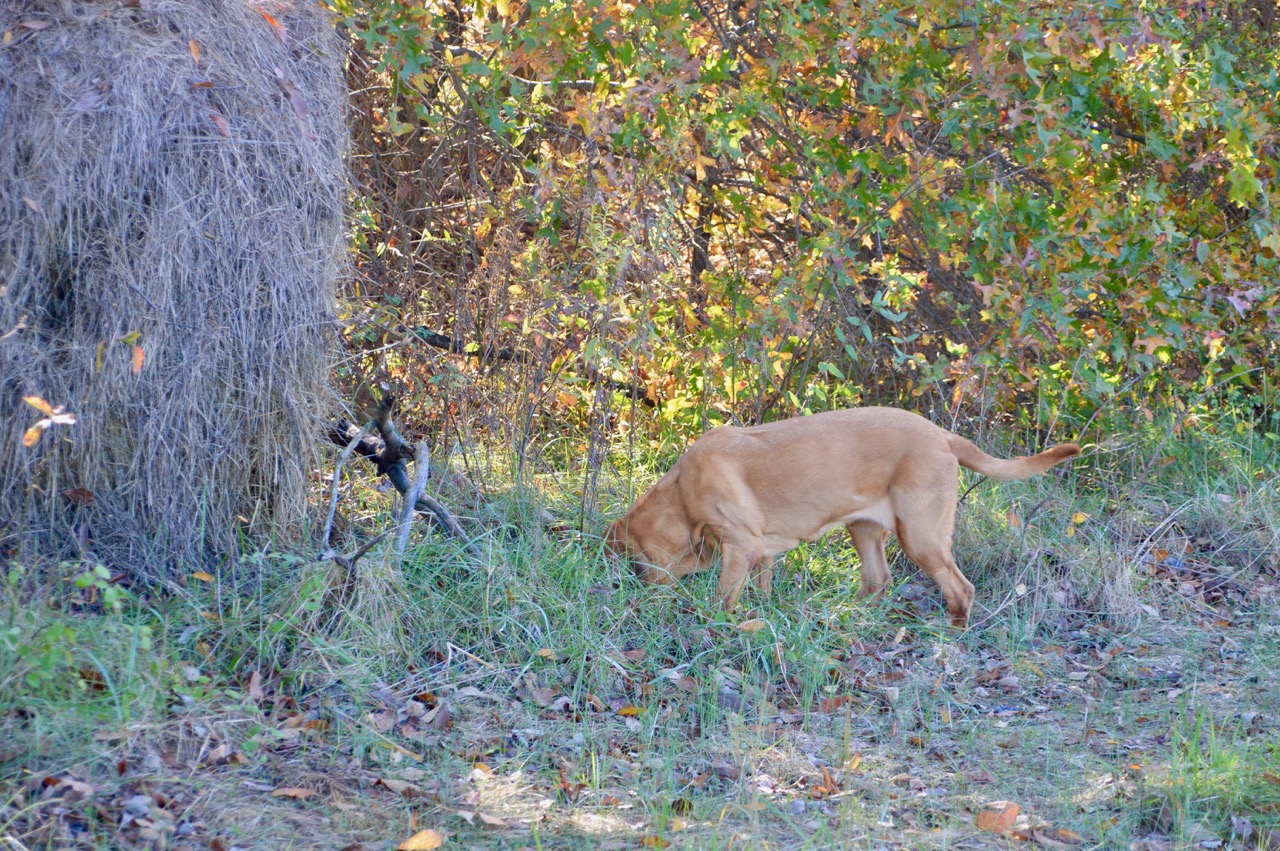 While taking photos of the hounds and glancing over the field area I saw nothing ... it happened in a split second. Too fast for me to even raise my camera to catch it on film. I have no idea where the rabbit came from or how close it was to Stella but it showed its white tail and record sprinting speed just in front of her. 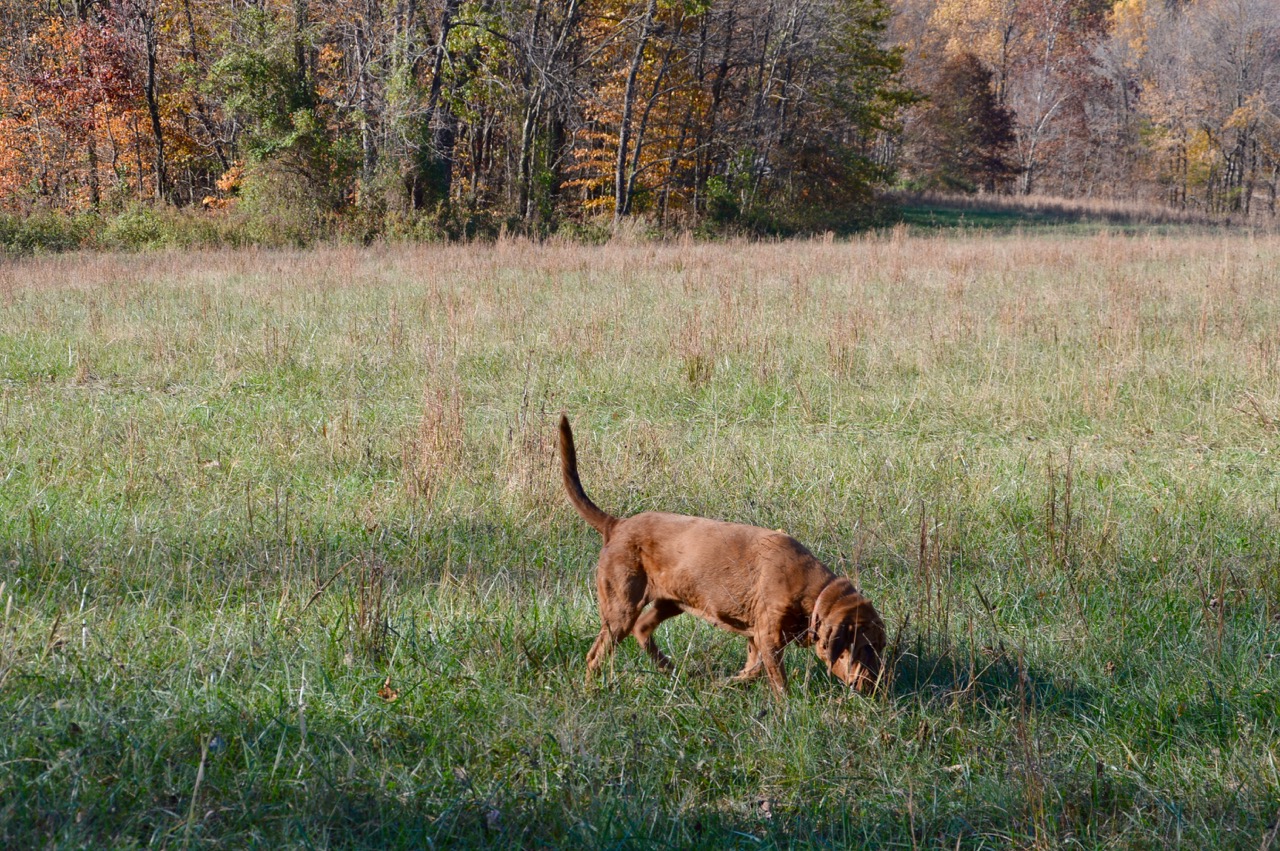 In fact it ran close enough to me I thought I felt it hit my hiking boot!!! It could not get to the field on the other side of the short wire fence fast enough. Stella had come to close to it as it hid in the deep grass and decide it was time to escape.

If a basset hound (Heidi) would have been around, I would have heard instant baying and their short legs would have been moving as fast as possible to catch the rabbit. Basset's are bred to flush rabbits out and then chase them into heavy brush. Once the brush is so thick the rabbit panics and stops. I saw this happen in 1989 when I took my basset Sadie with me to heavy brush area by the golf course. It happened just as I described.

Once Stella picked up the rabbit scent she became a little more excited yet she had no idea just how close that rabbit was to us and how far away it was now. These are the photos in sequence of how she reacted. She was moving faster than the stop action the camera captured. 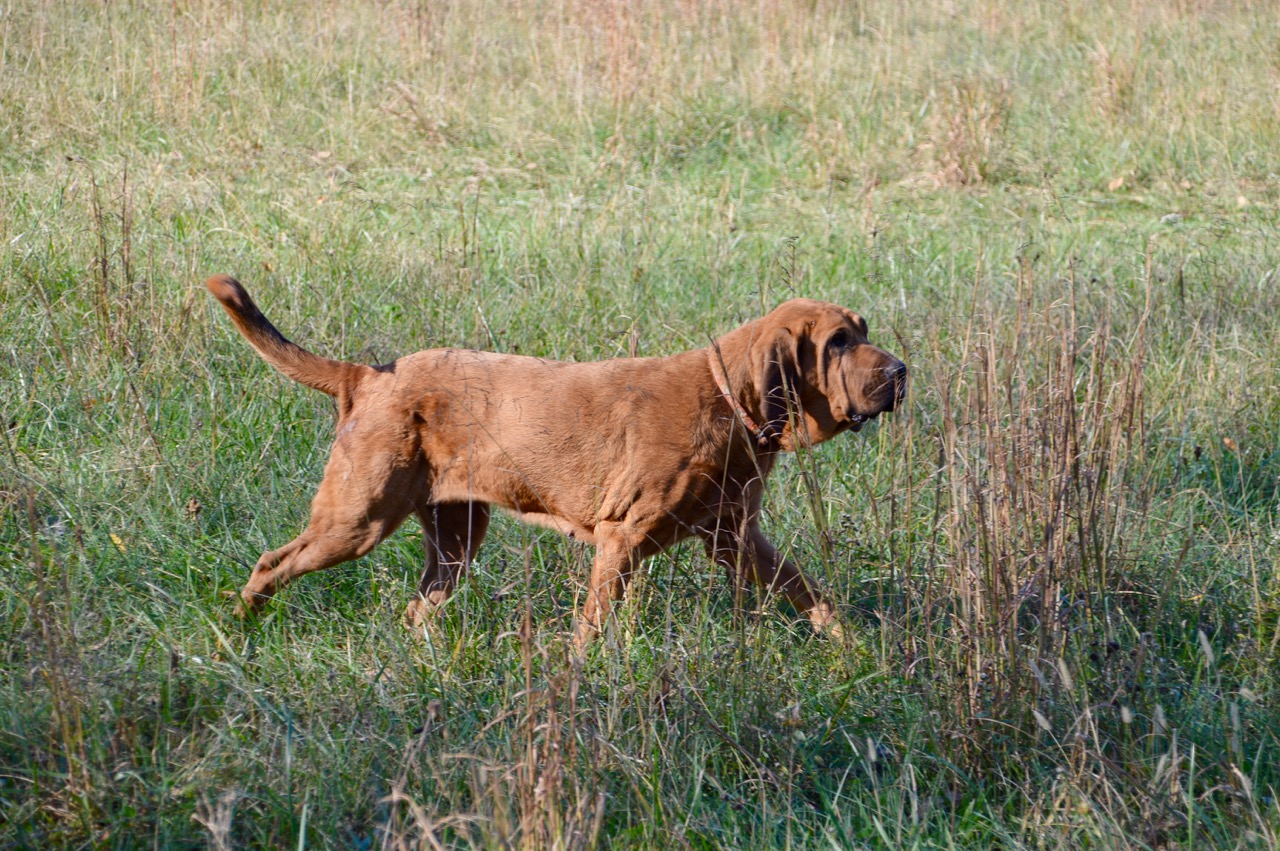 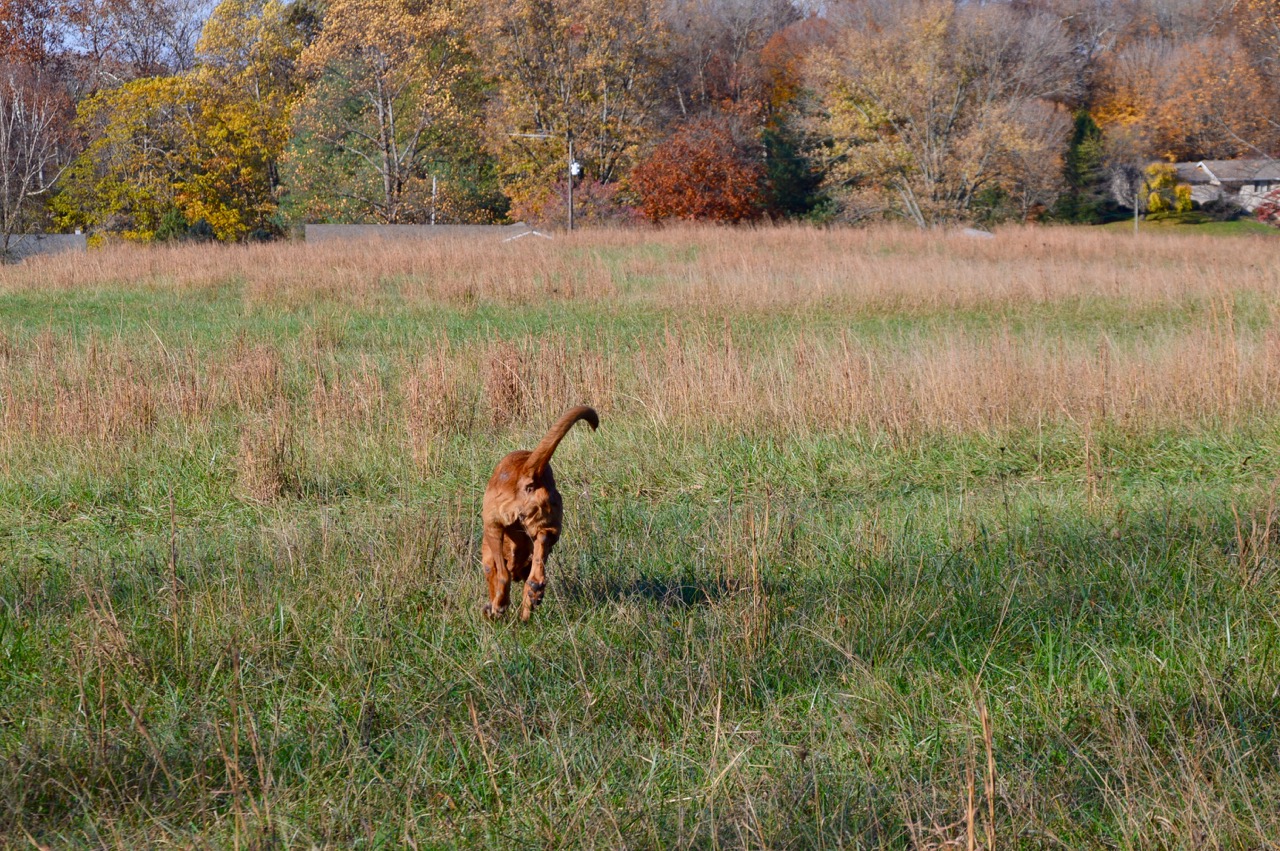 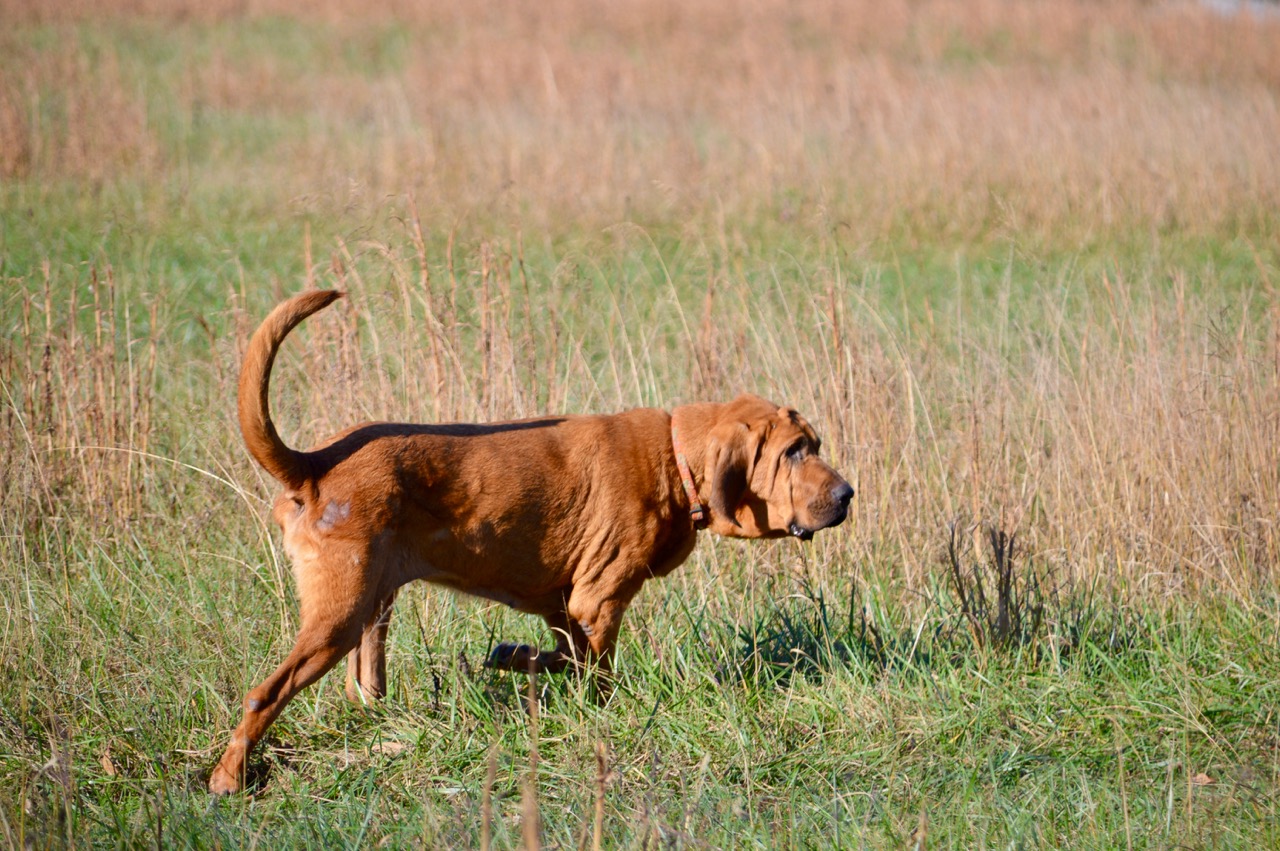 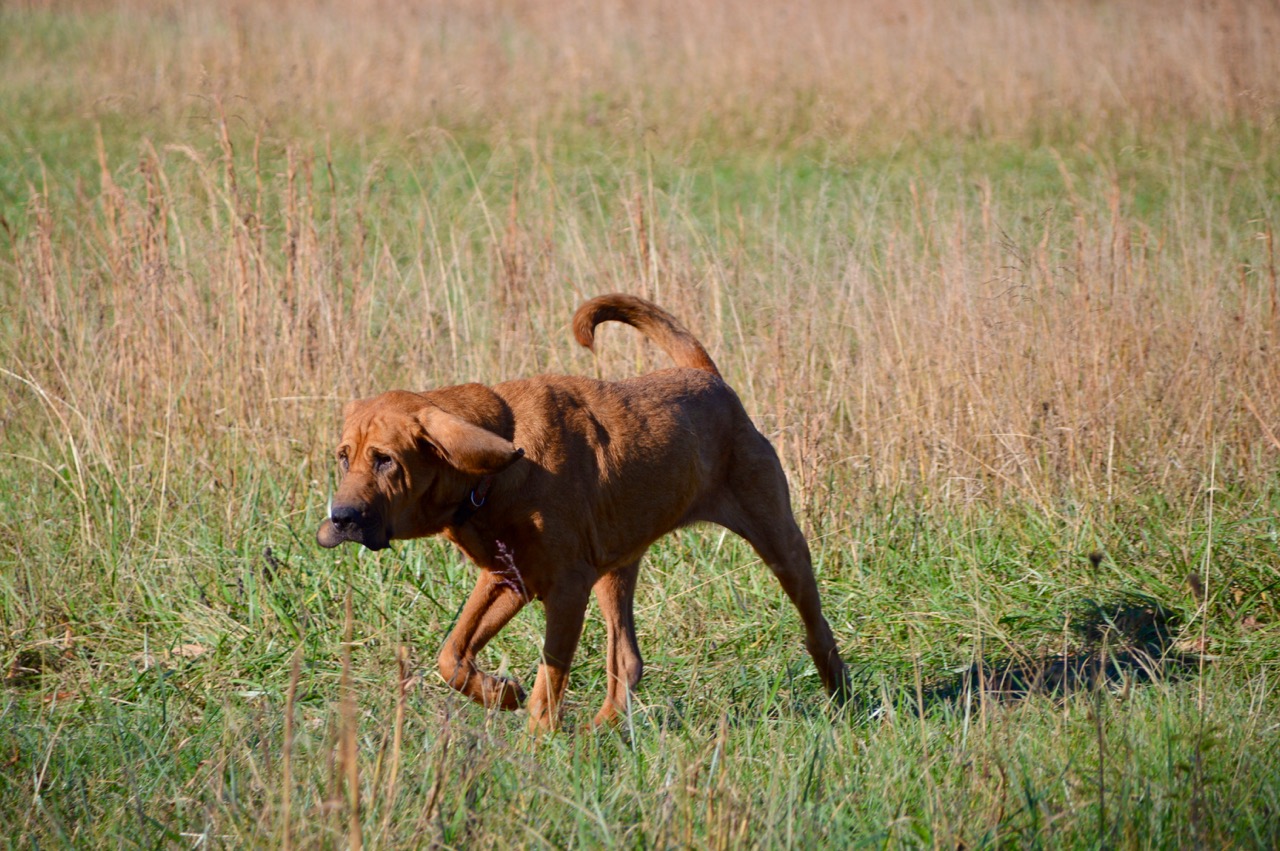 She could tell it had been there somewhere but she couldn't find it. 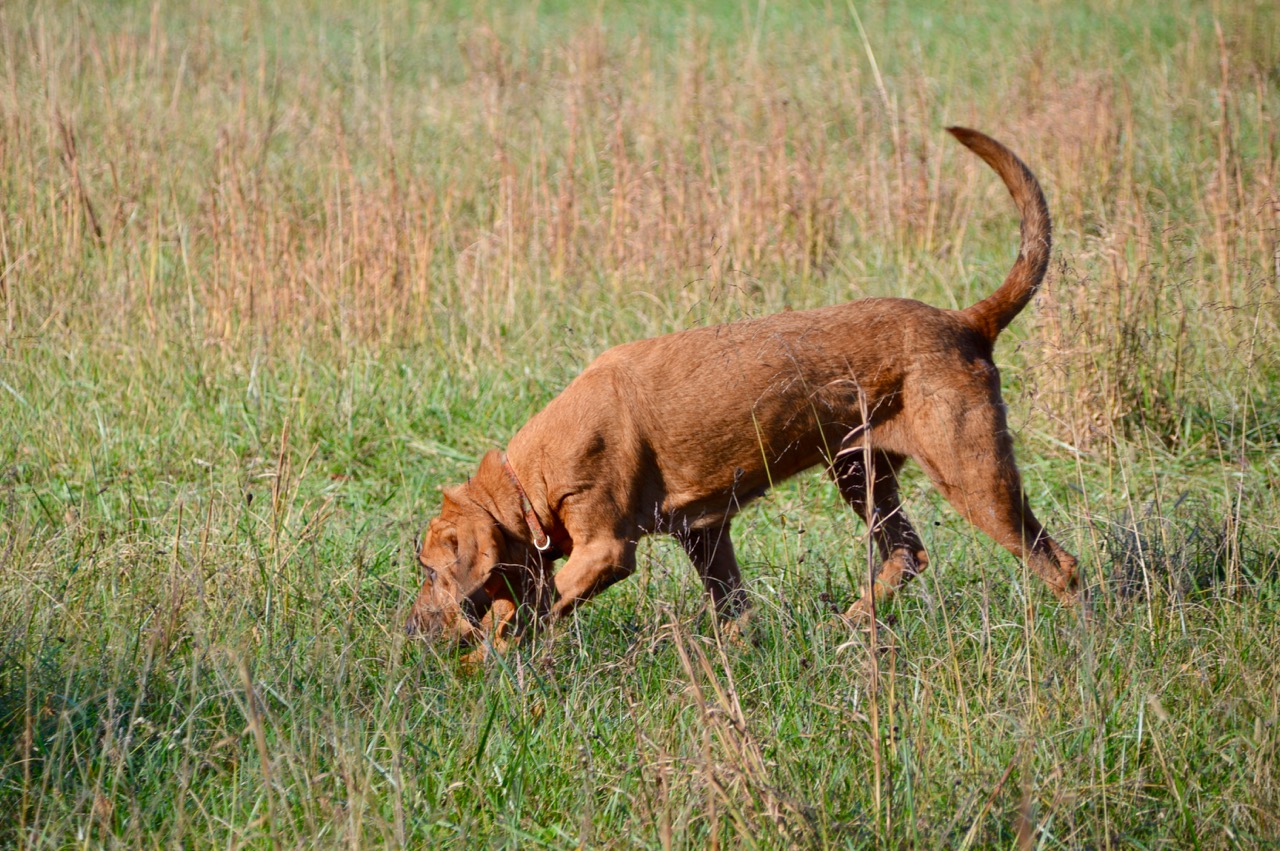 In the meantime Sadie finally caught on and went racing down the edge of the field, right to the point where I saw the rabbit sprinting into the field behind us. 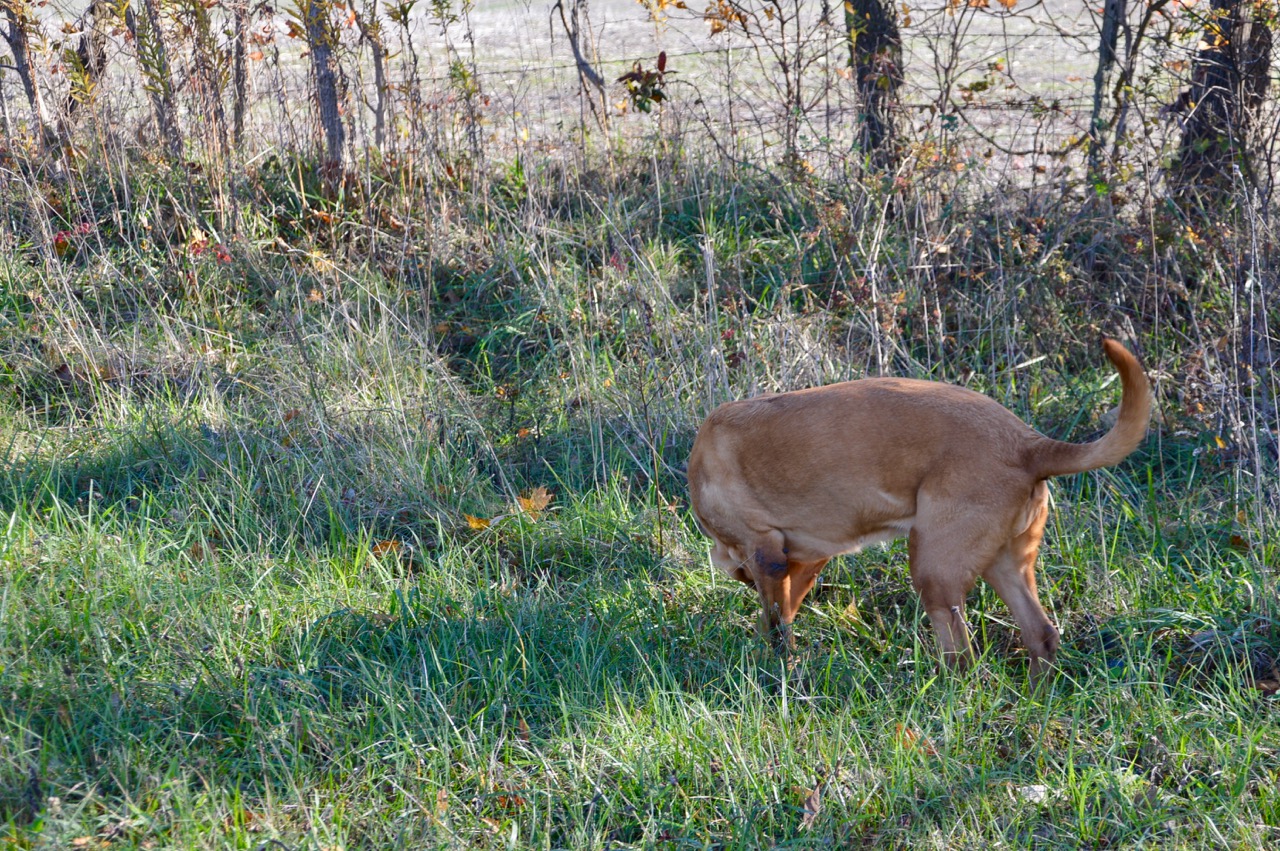 Yes Sadie ... that's the spot the rabbit jumped through the heavy grass and over into the field. 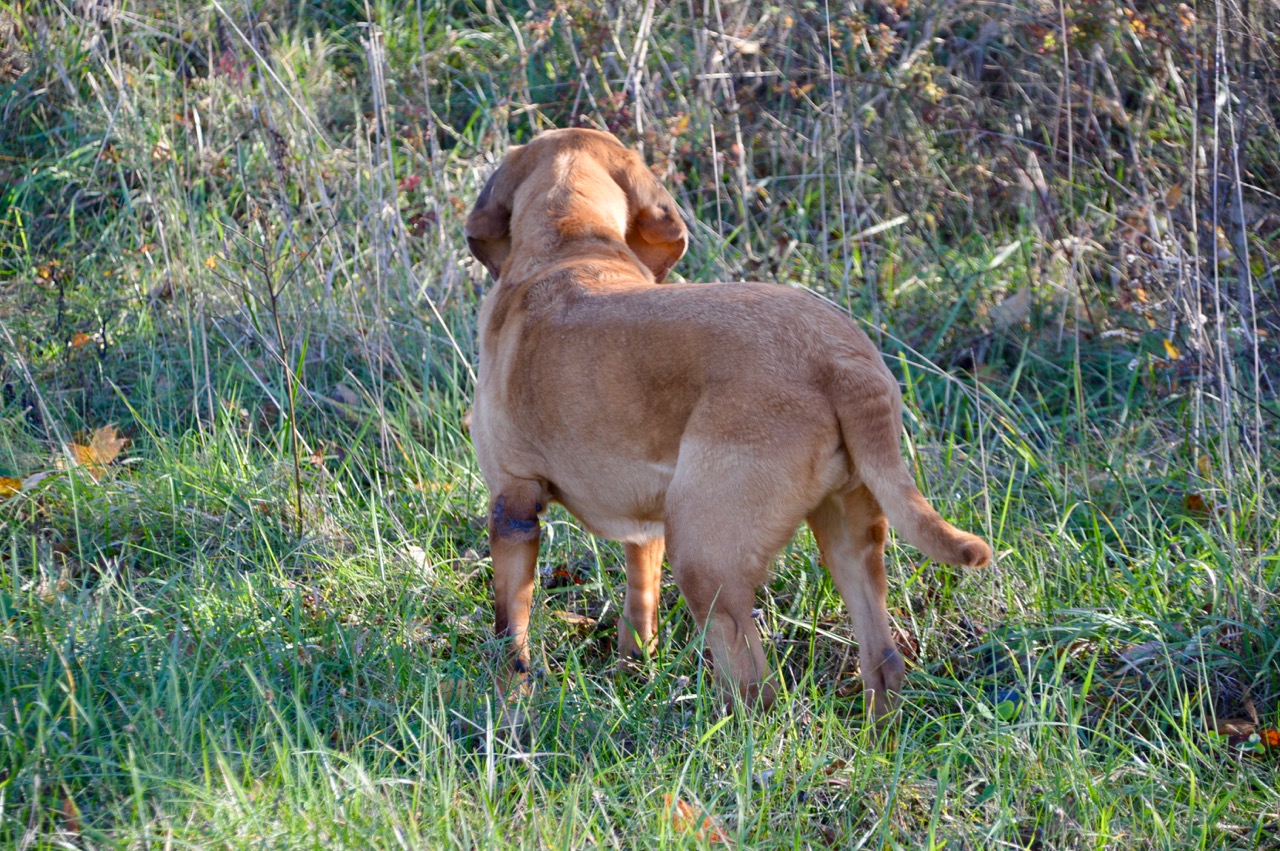 With all of that excitement over with, it was like a normal walk to the hounds. They turned for home like nothing had happened. While they ran for home, I was thinking about raking leaves today. 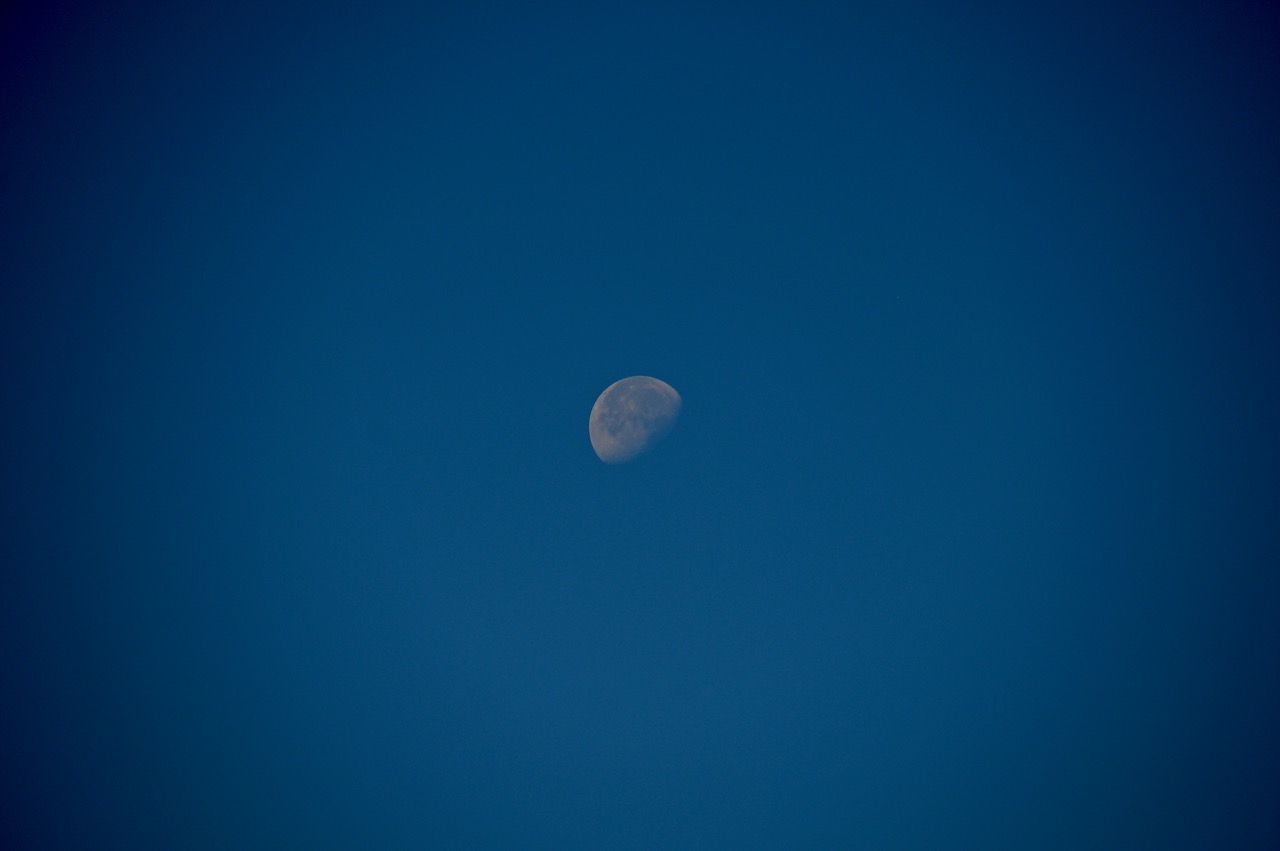 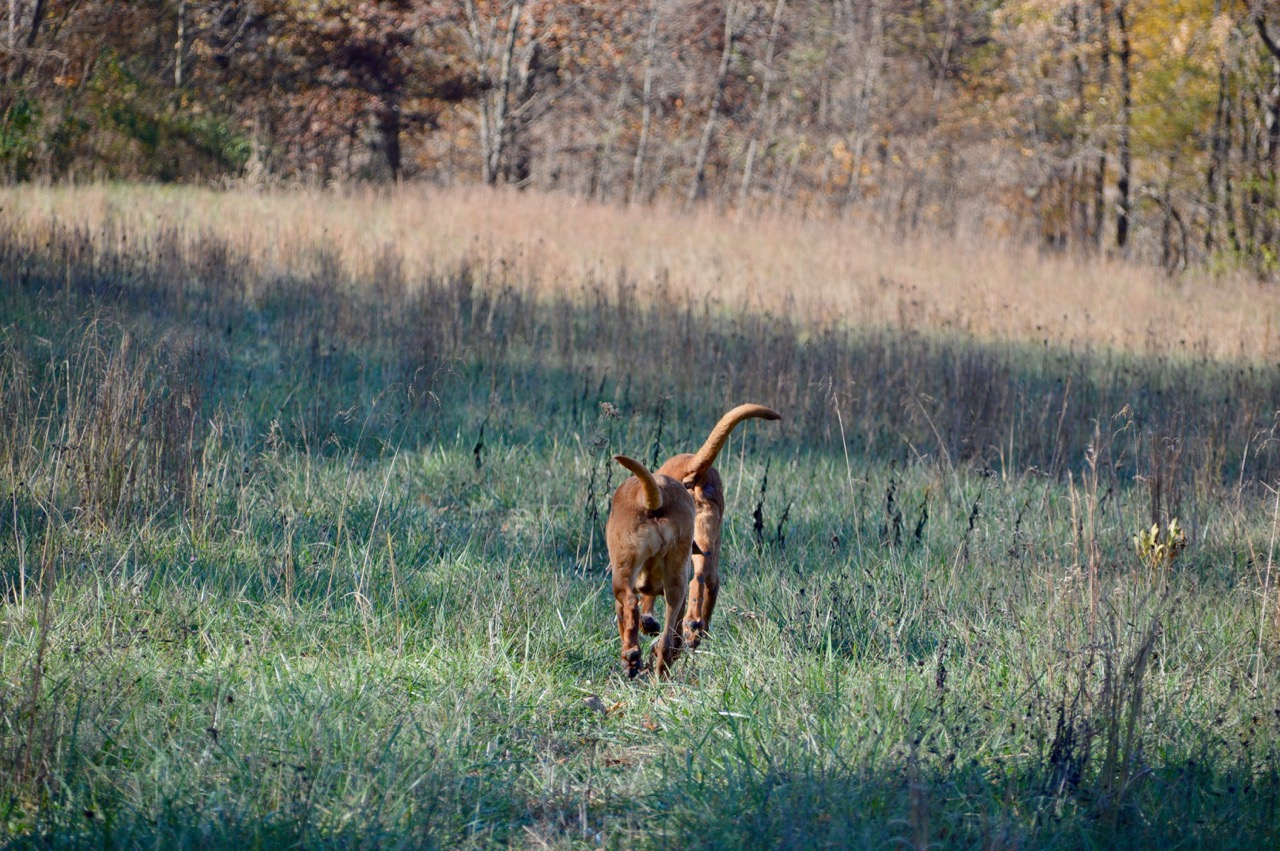 This gives you a better idea where they have been running to the past few days. The photos that I zoom into makes it look like they are close to the highway but as you can see they are stopped quite a distance away from the highway. Basically they are in the middle of the lower field between my house and the neighbors, just to the right of the 'alternate' path. 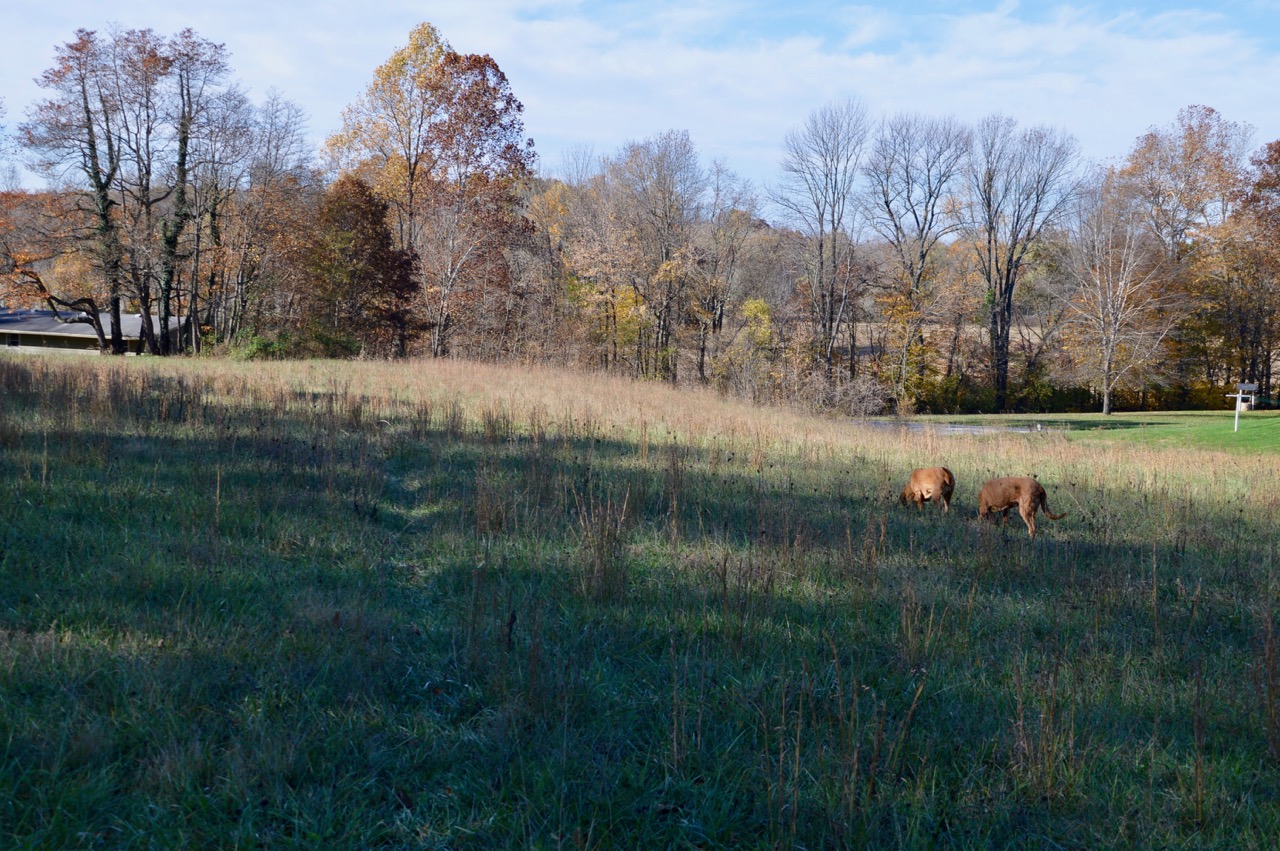 Same position but zoom'd. See how close the highway looks in this photo? 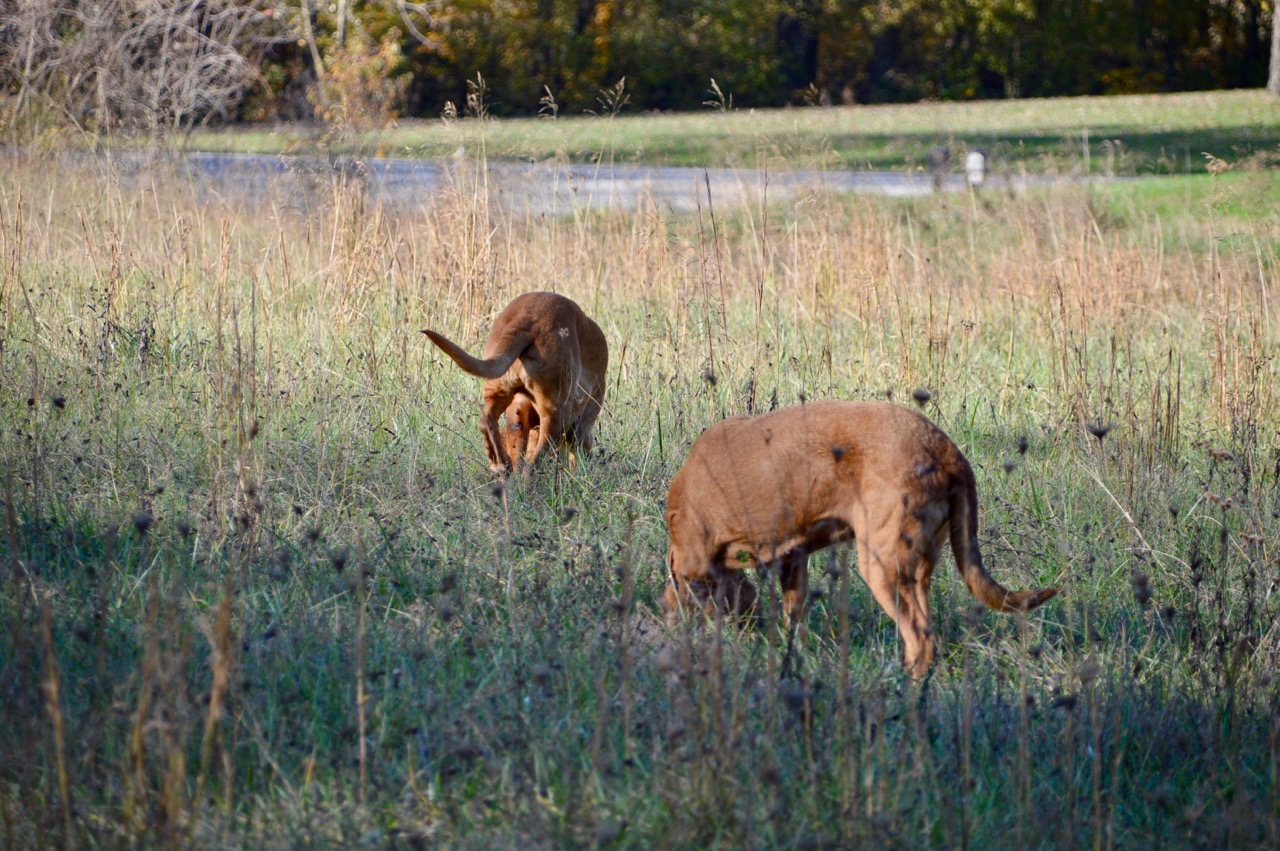 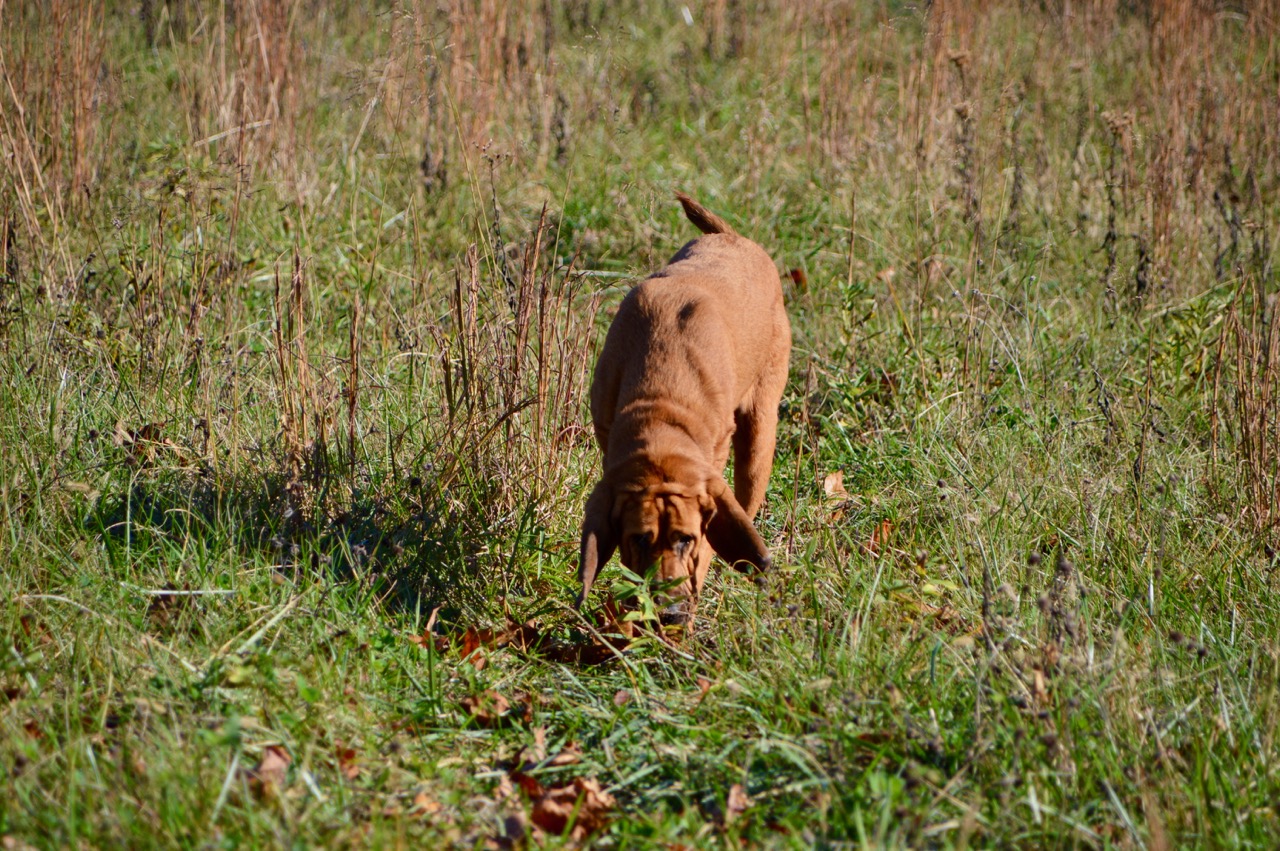 By this time she is smelling either rabbit scent or those from the field cats. 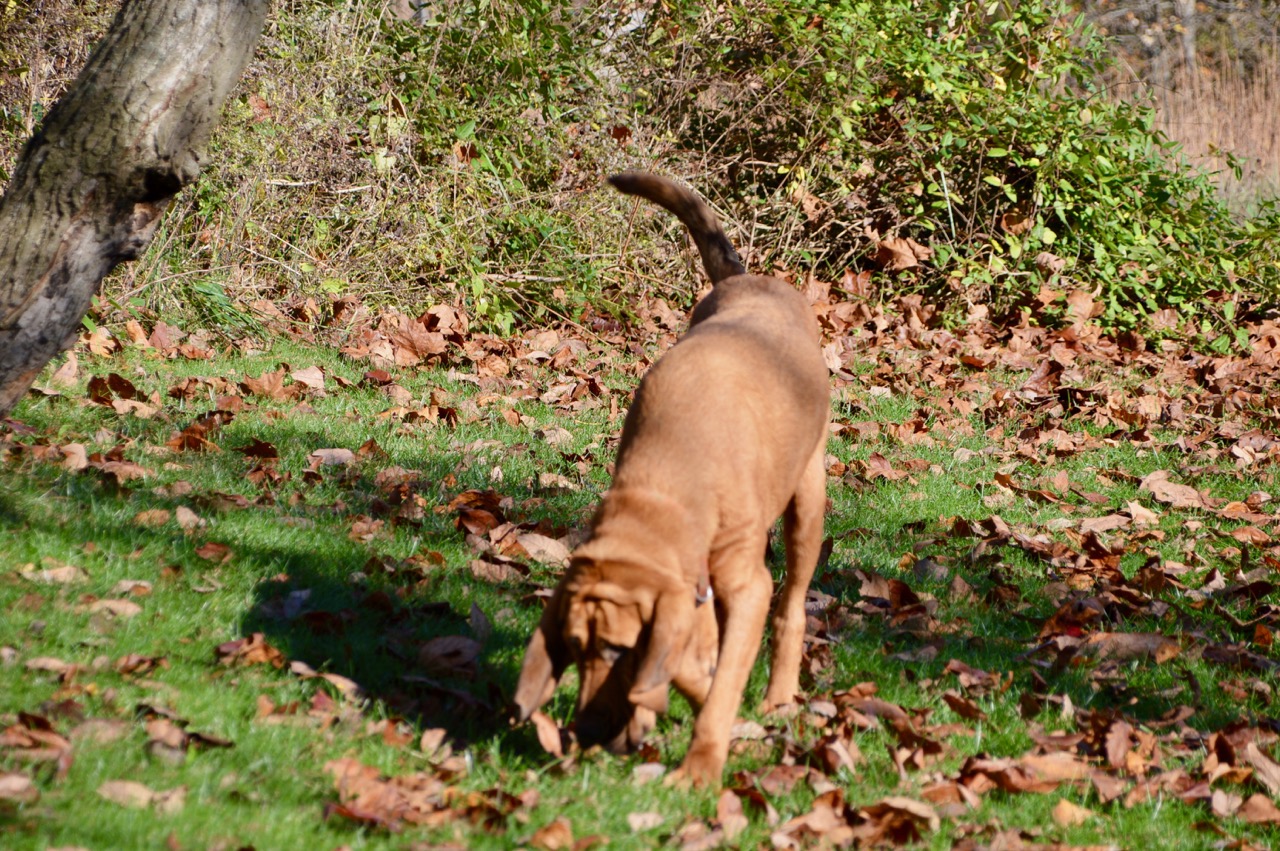 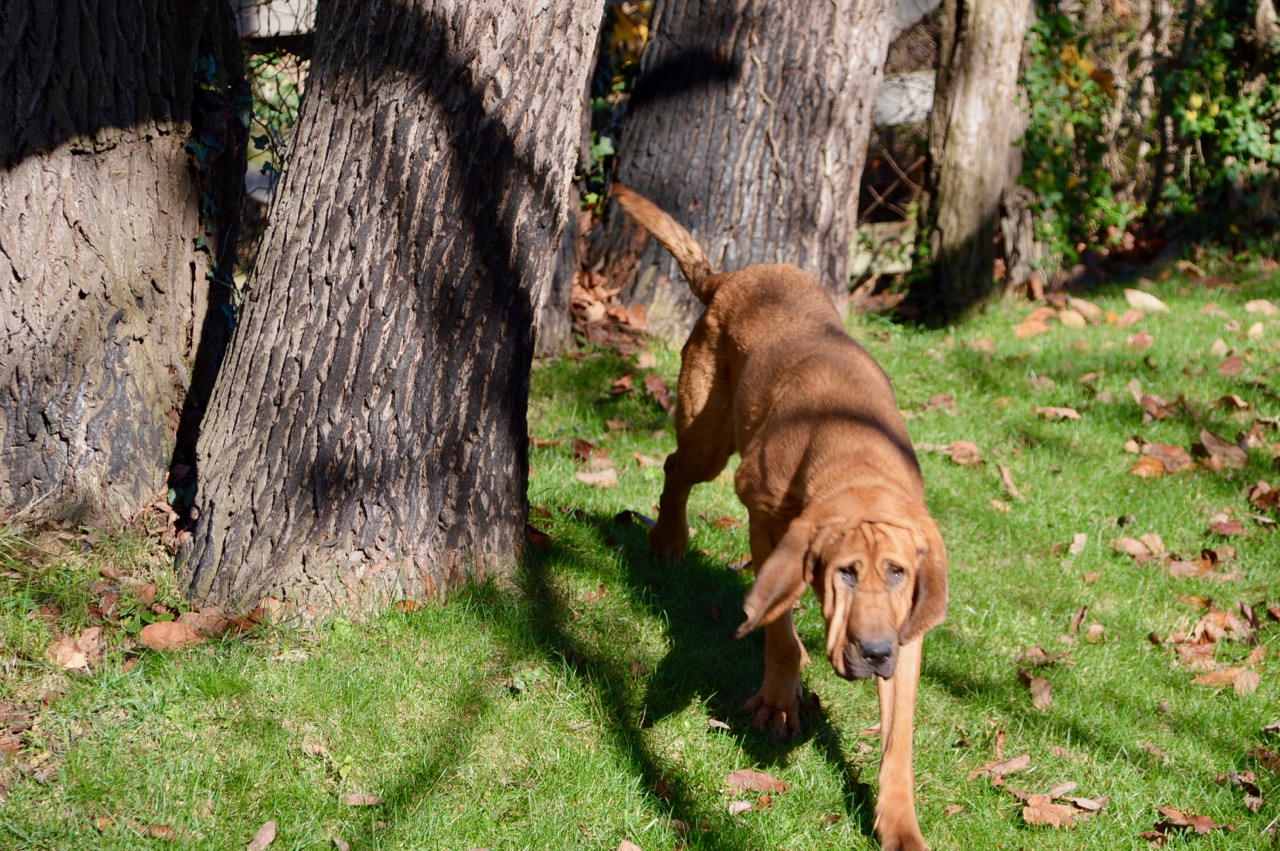 Although during the winter with snow on the ground I can see deer tracks moving down that small hill around the tree, then around the corner of my house, diagonally down the front yard, crossing the driveway into the field across the highway. 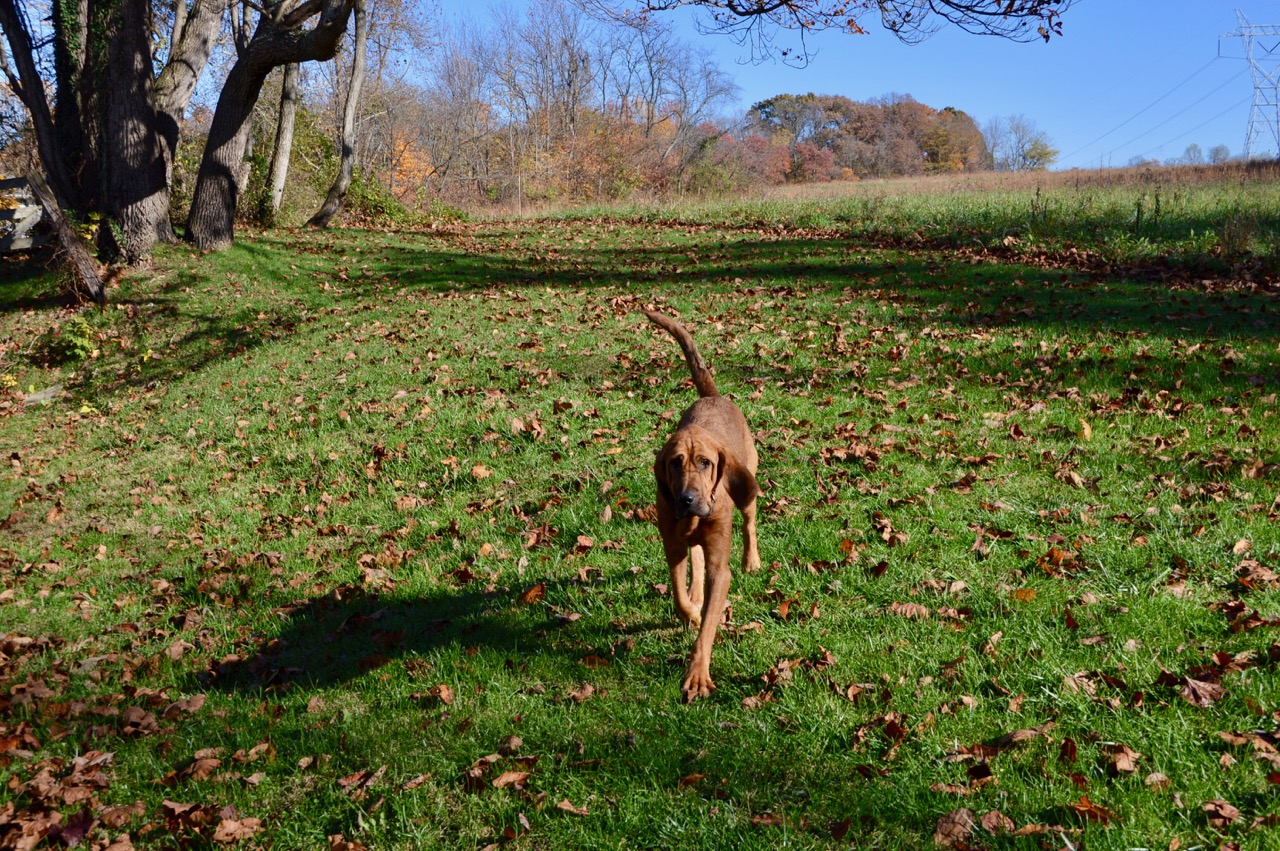 With the sunshine, the slight wind and the perfect direction from the N/NE for raking leaves ... I'm thinking of clearing out the north side yard and raking the backyard toward the burn pile. I am going to take my big powerful electric leaf blower and blow the leaves along the driveway fence down the drive near the highway and let the traffic blow them away. Or I could move them to the middle of the gravel drive and build my infamous "wall of flame". My co-workers use to comment on the "wall of flame" at work the next day after they saw it on their way home from work.

Plus I need to get the leaves you see raked out of the yard and burned so I have time and complete focus on repairing the Z4 when the parts arrive.

I might post again later tonight about any afternoon excitement. What do you prefer?  The longer post once per day at the end of the day or one or two shorter posts (still 18-22 photos) late morning or mid-day?

Basically I post most of the time when I have a free period in my day, depending on what I have going on.

The hounds were sound to sleep five minutes after their walk. It's so quite while I write this you could hear a pin drop. It's another hour until their lunch and the the 'real day' will start ... things don't seem to happen around here until after their lunch around noon.

Perfect weather today in 'the tropics' of Southern Indiana.
By Steve at 9:24 AM