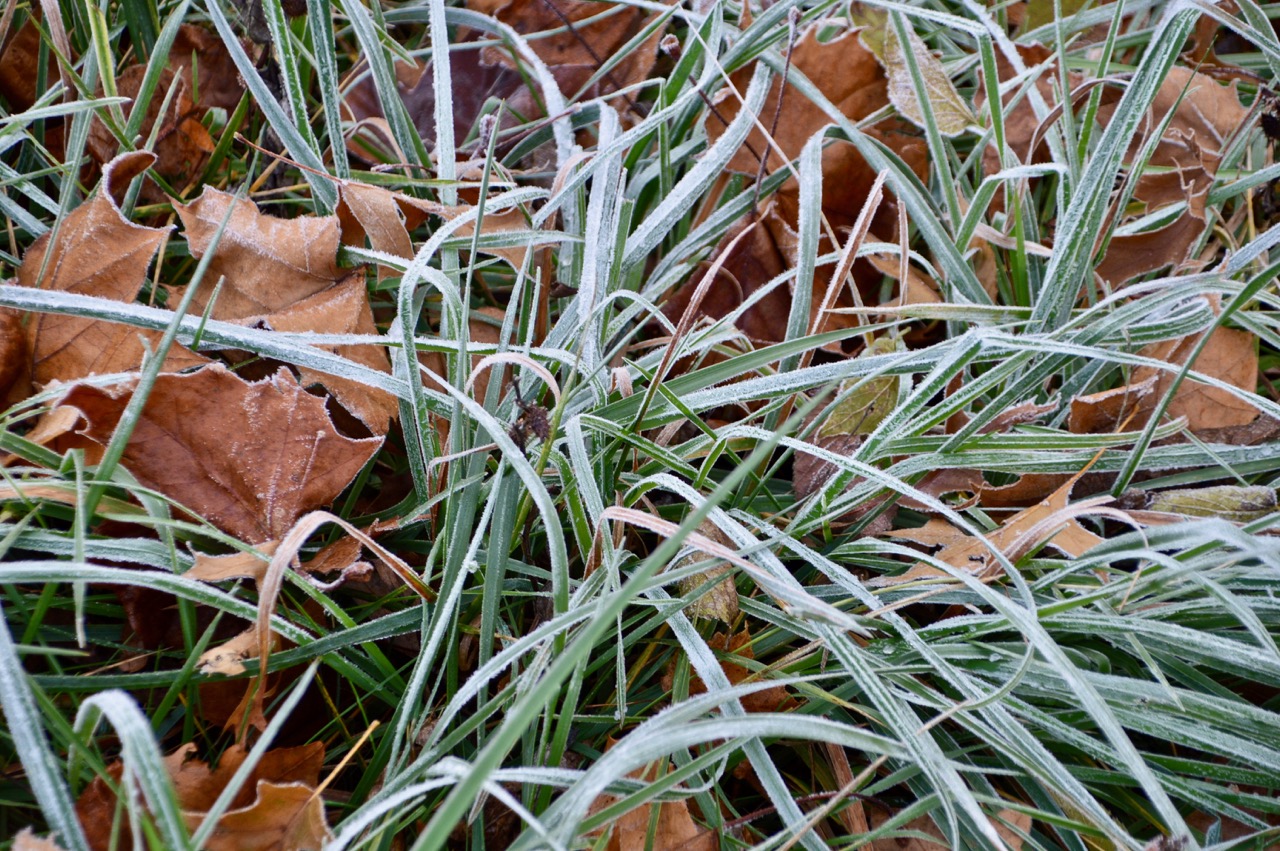 The first reminder that I did not turn the heat on before going to bed, hit me soon after I made my first step onto the floor. It was cold inside the house, like 58° cold. As I let the hounds outside for their first trip of the day, everything looked like it had a layer of snow but luckily that was only heavy frost. The hounds were happy to come back inside for their breakfast kibble and a quick nap before their first walk of the day. It was colder of course outside.

By the time I had shot my 2nd photo from the corner of the back of the house, Stella had already taken off and was running away. I had no idea what she was doing or where she was going but it was obvious she had a plan. 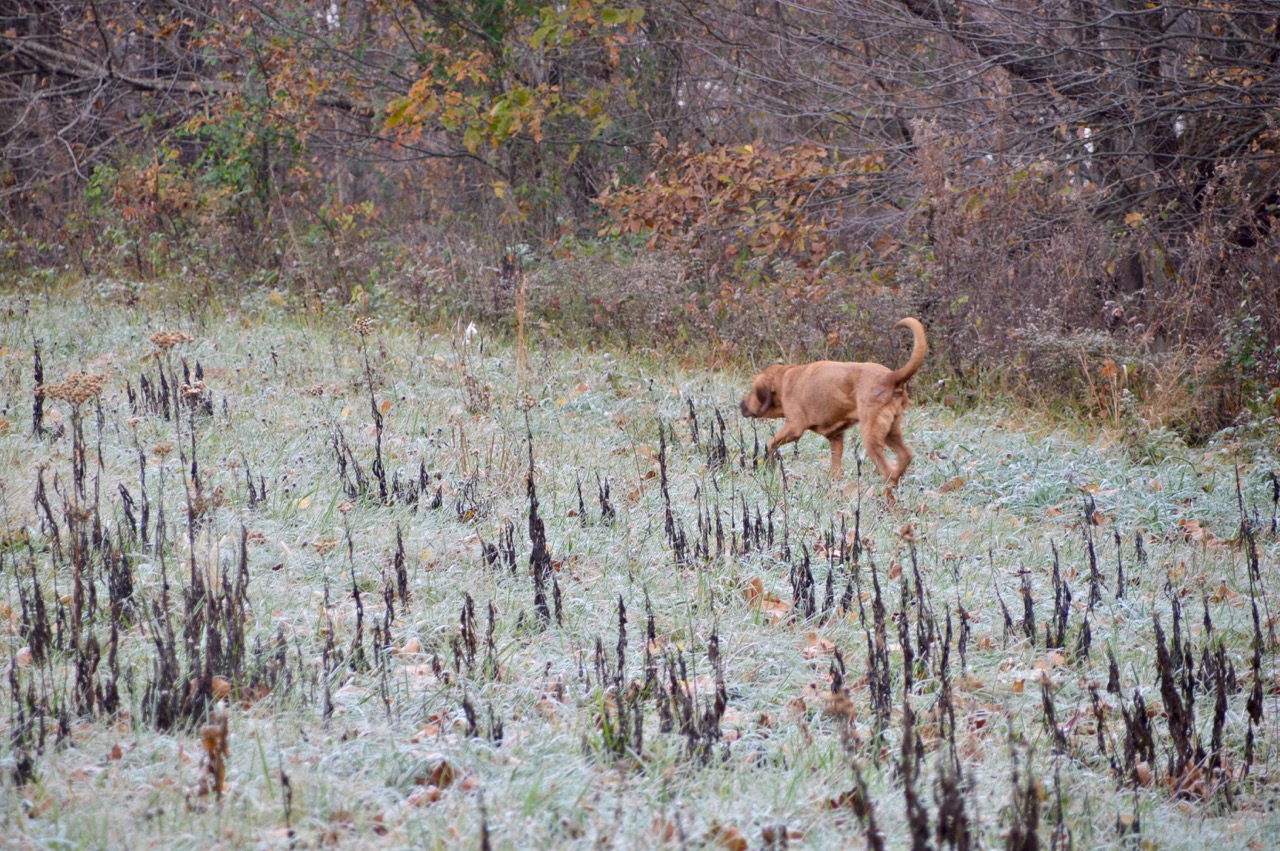 While she slowed (left side of pic) Sadie found interesting activity in the woods. I had barely stepped into the field and wasn't sure if I was ready for an all out sprint after her. I would have had to start sprinting after her if she were to head toward the gully. 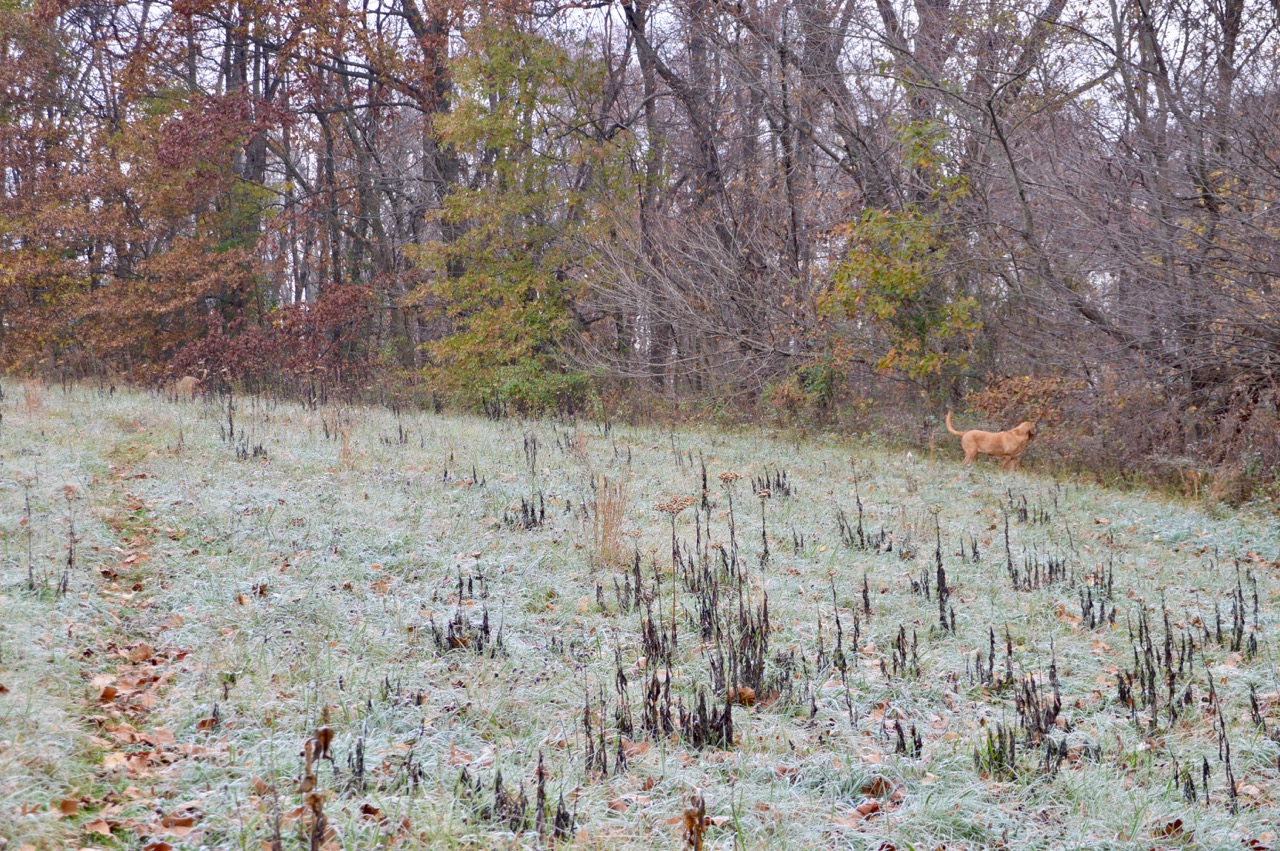 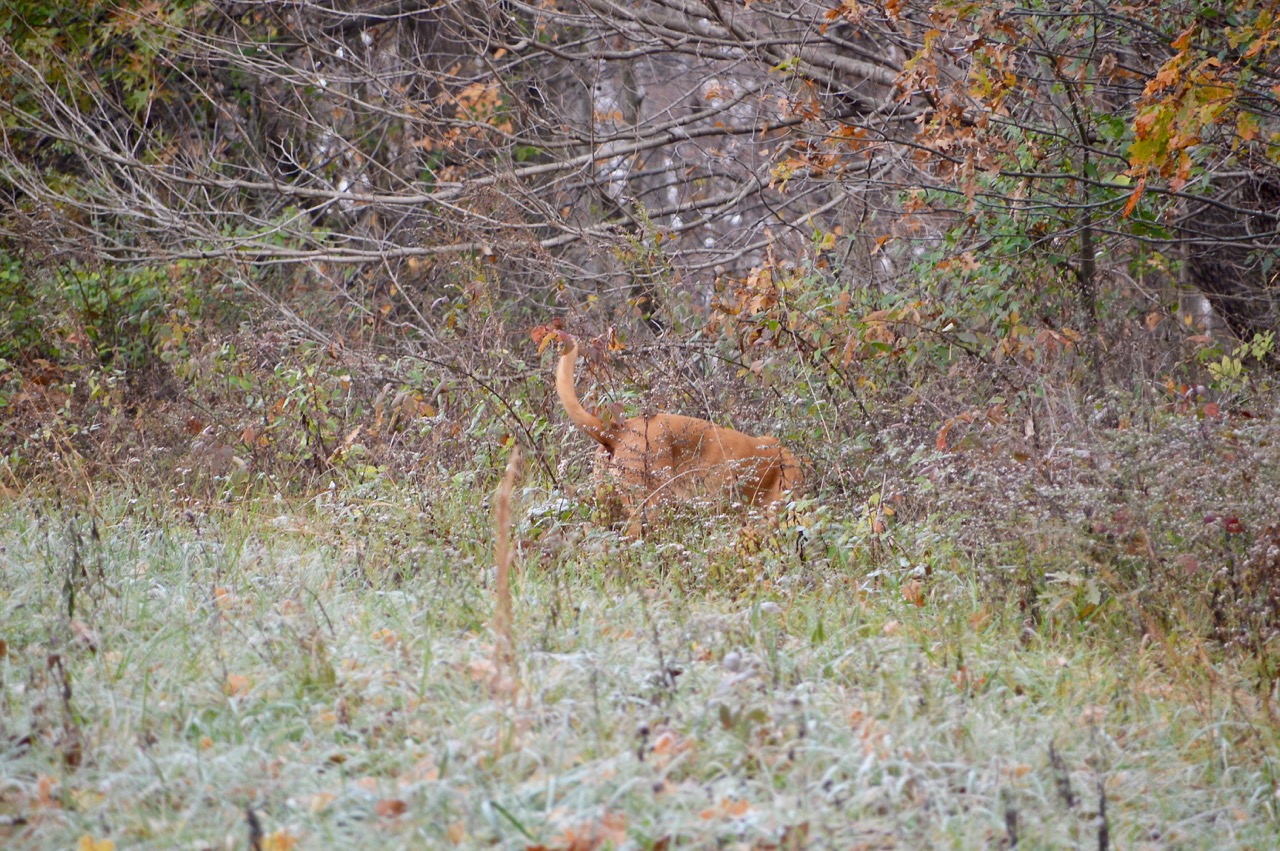 As I kept an eye on Sadie, I glanced up looking for Stella. You can tell how far away I am by the incline of the field ... but for some reason Stella was heading in the opposite direction of our path and at a pretty good clip.  Where was she going? I now had two bloodhounds going in opposite directions so in my mind I had to chose which one I was going to focus on. 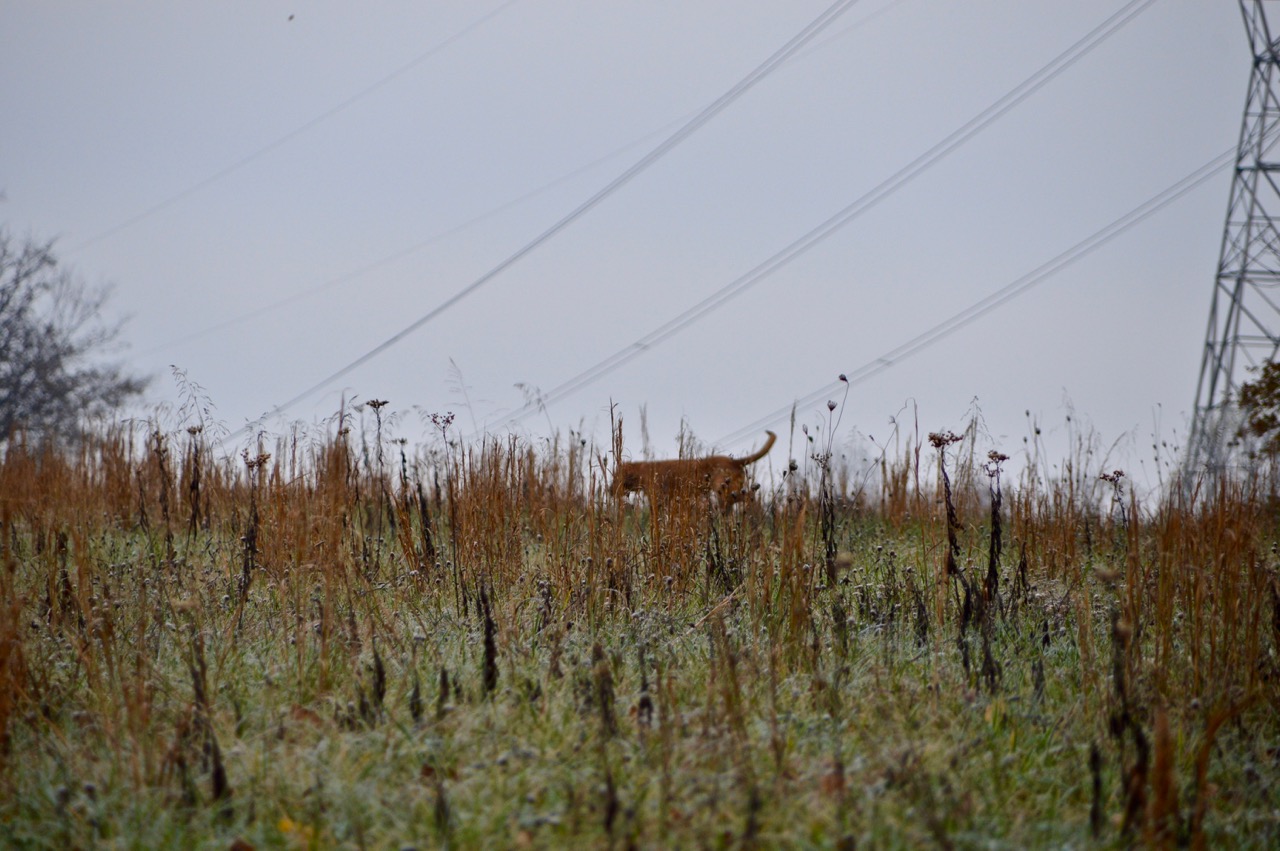 With Sadie backing her way out of the brush and back on the path along the edge of the woods, I turned to look for Stella. 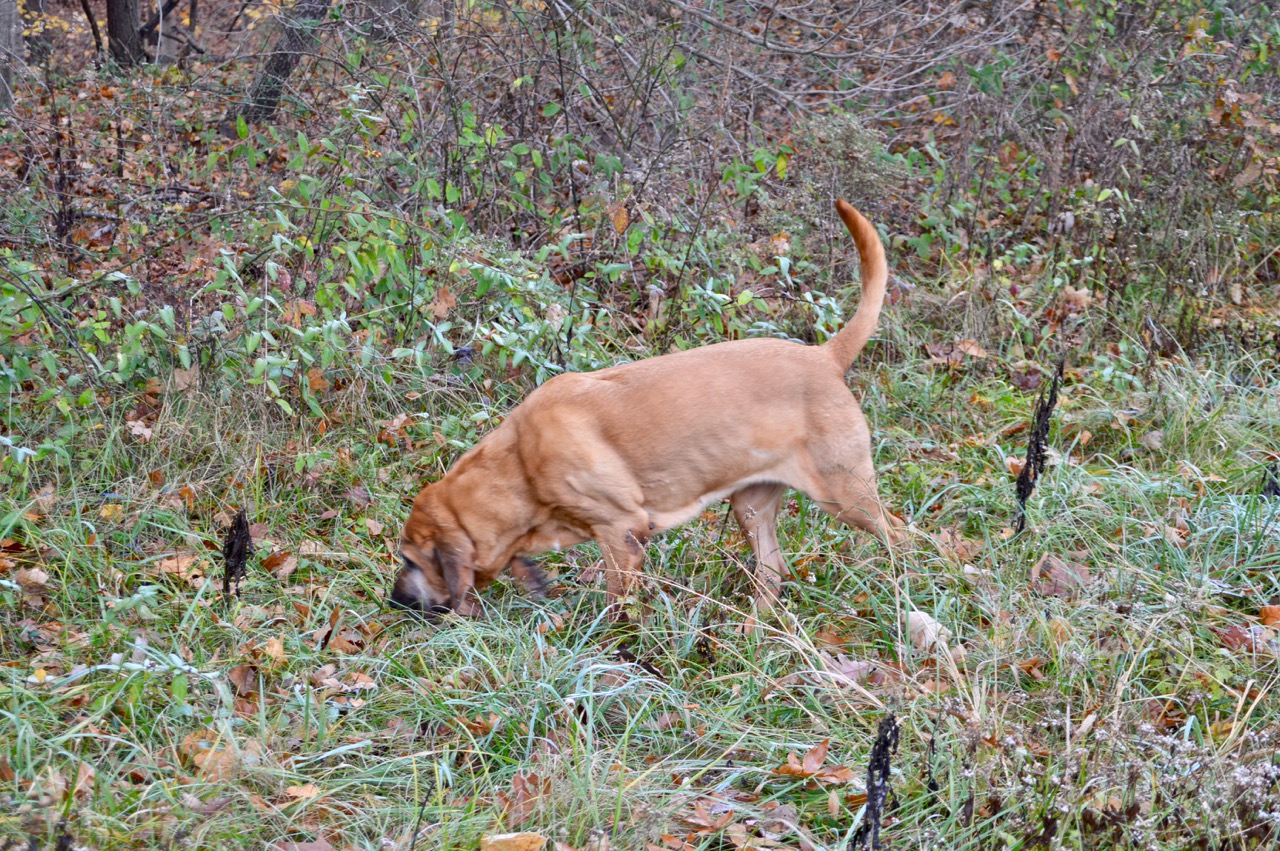 At first I didn't see her anywhere and thought she had ran into the woods behind the neighbor's house. Then just barely did I see something that almost looked like a dead weed but it was too big, then it started moving ... I knew that had to be Stella moving through the field. 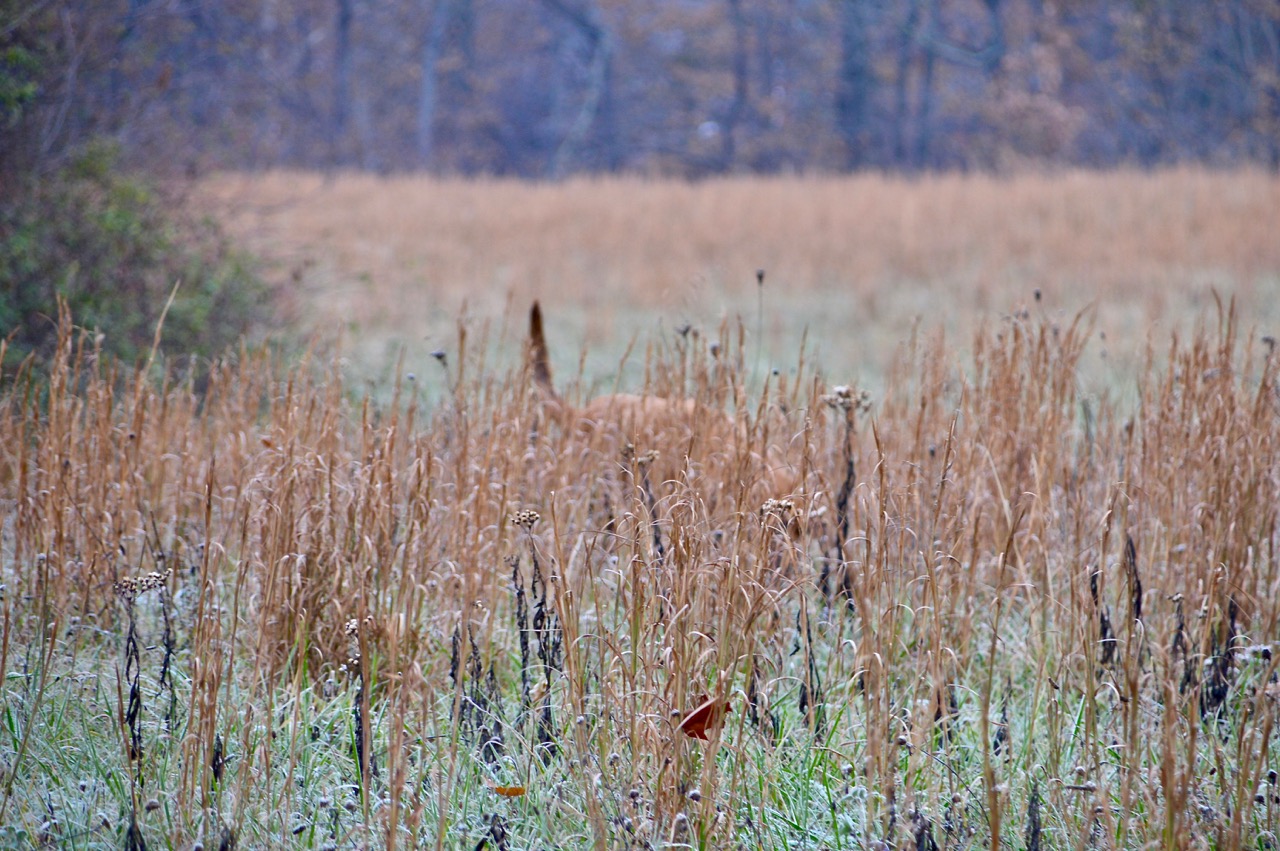 When I yelled her name it must have startled her ... notice the ear movement as she raised her head up quickly. 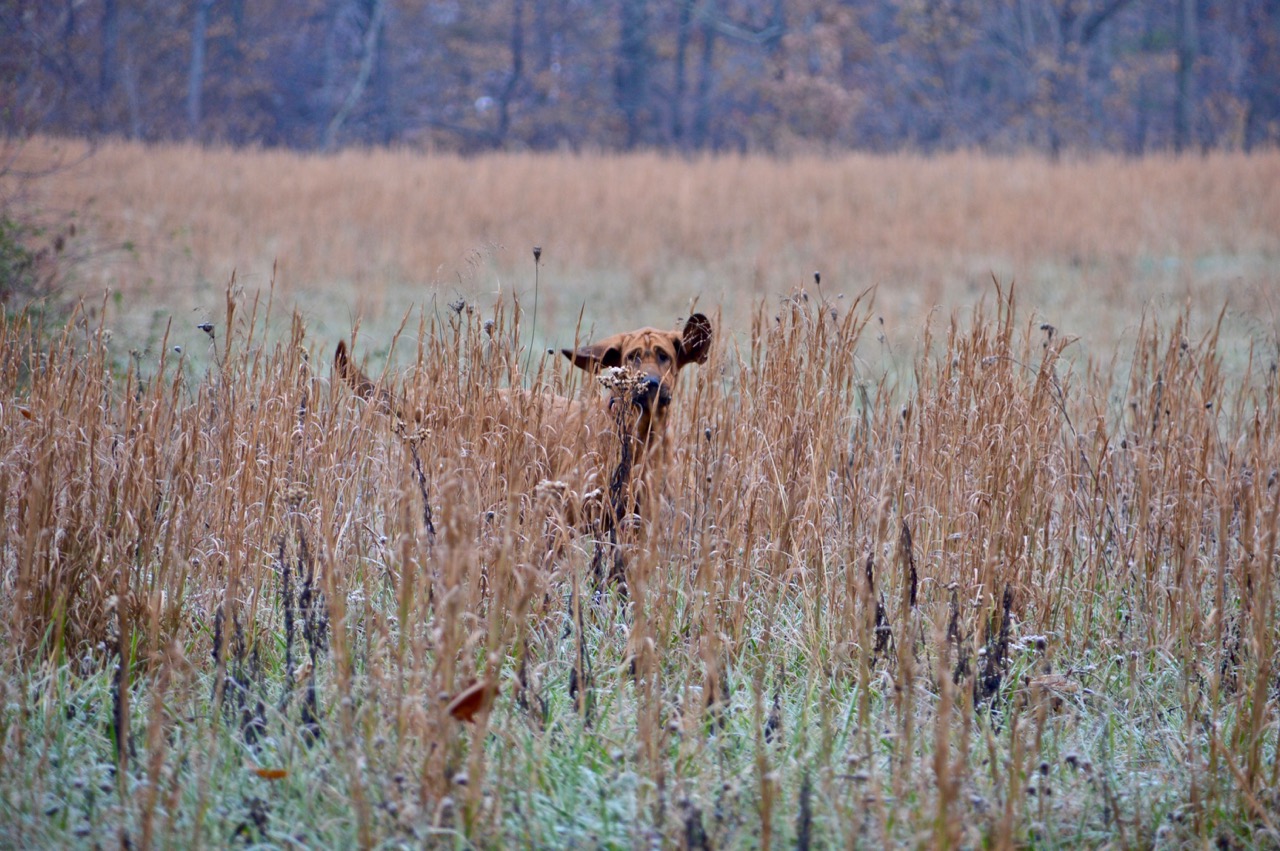 Then just like that she took off running for Sadie around the first turn. The wind chill of 24° must have added energy and motivation to the two hounds this morning. I didn't mind the chill. With little to no wind it wasn't that cold. 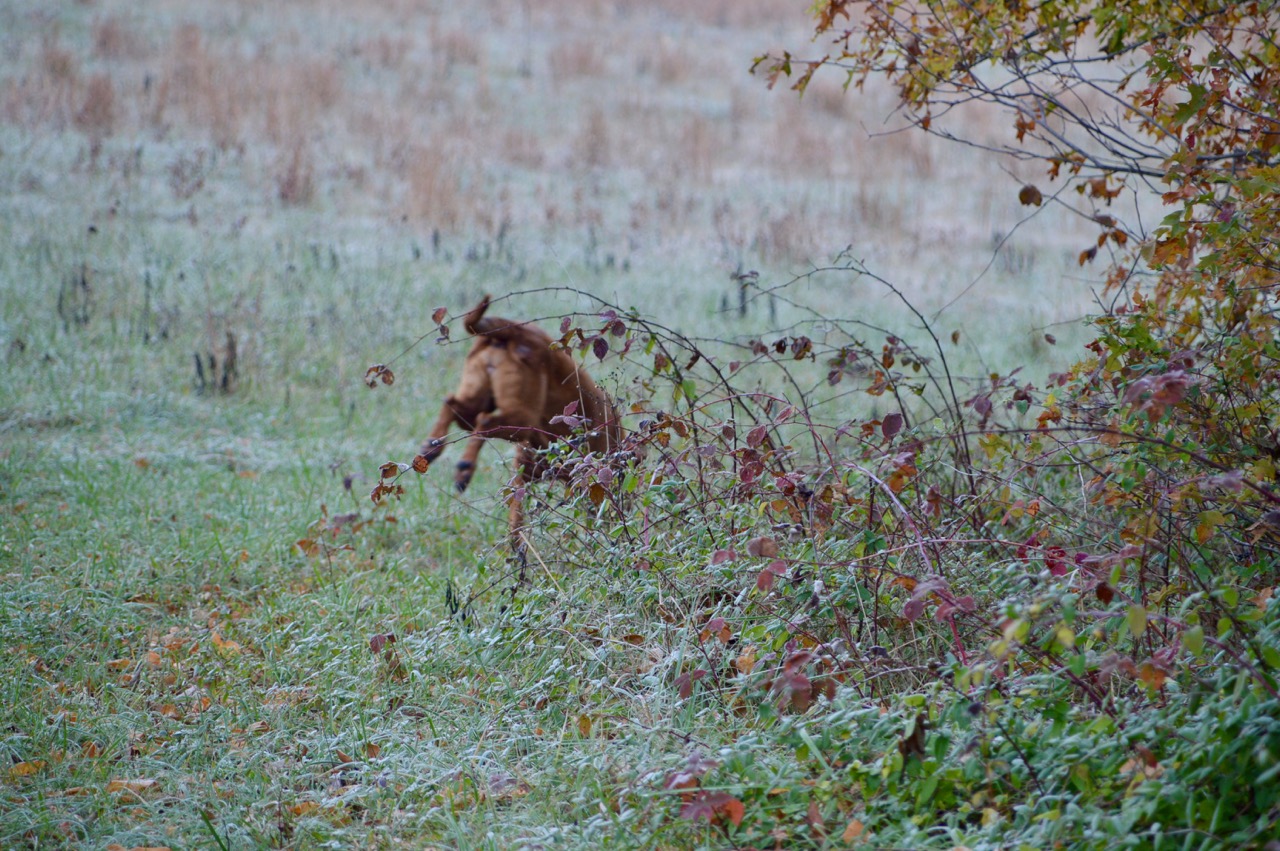 Just like yesterday, as I continued to walk, Stella stayed behind. I figured we would pick her up on the way back. 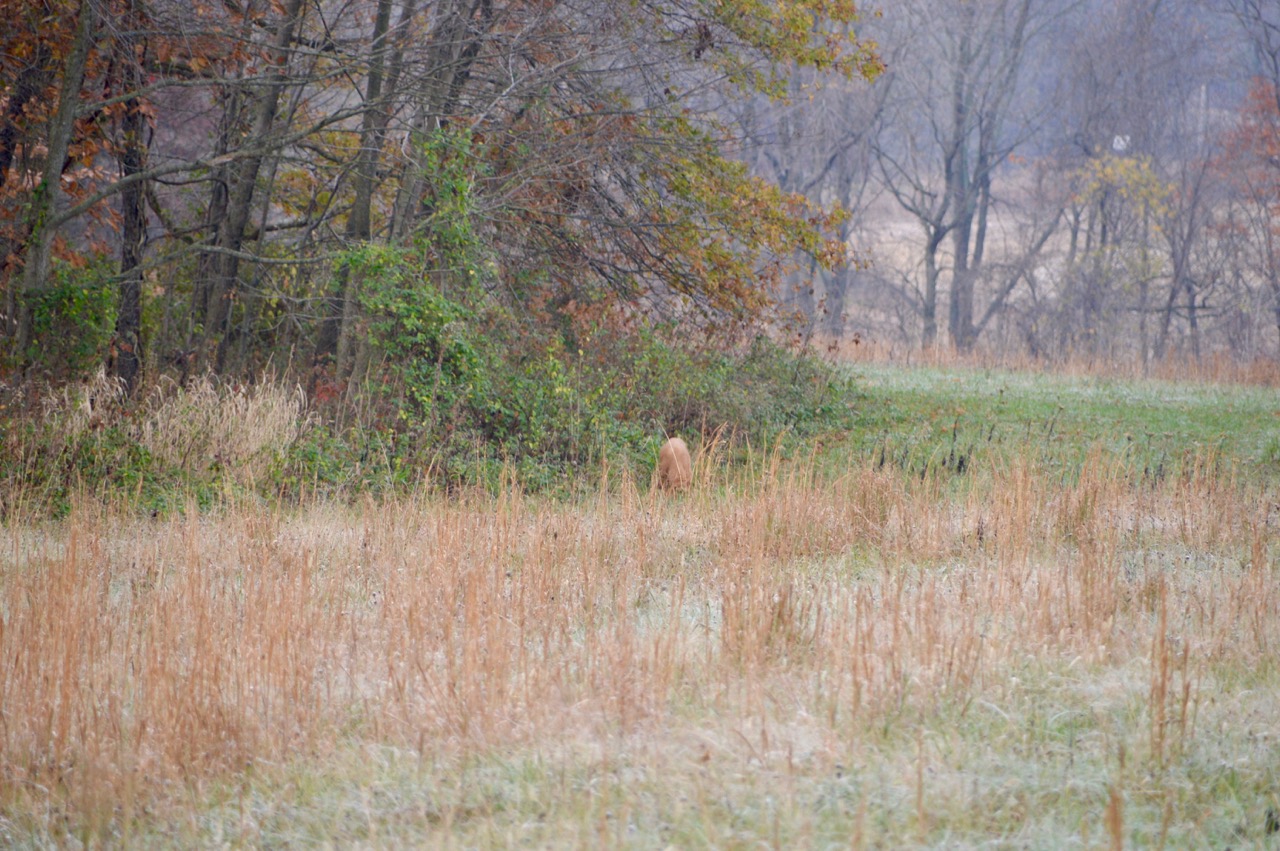 Sadie had plenty of work to do along the back edge of the field. She is out there for one reason, to inspect and identify scent. She is rarely concerned with what Stella is or isn't doing. 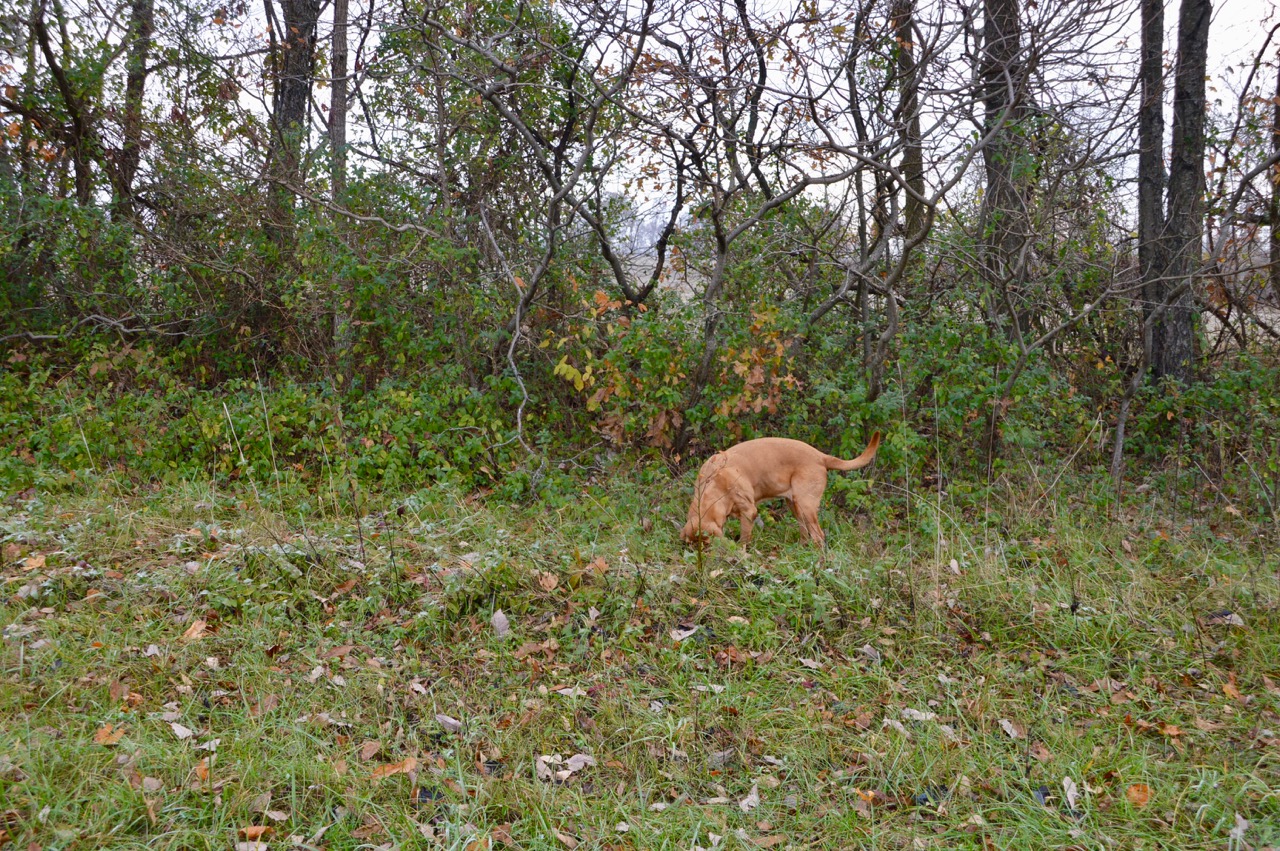 I kept zooming the lens to 200mm so I could see what Stella was doing and where she was. Sadie and I had barely made our final turn home and I could see that Stella was slowly walking toward the path to meet us. 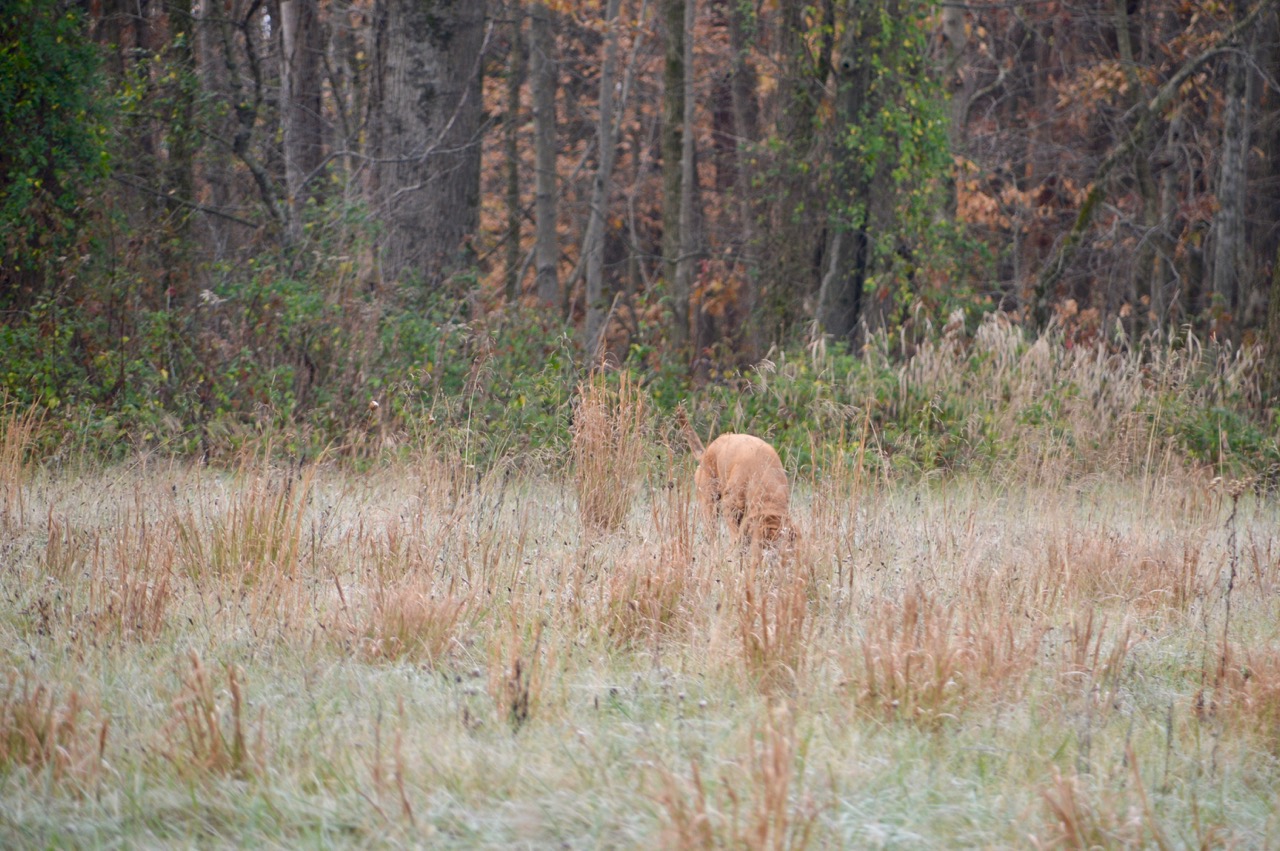 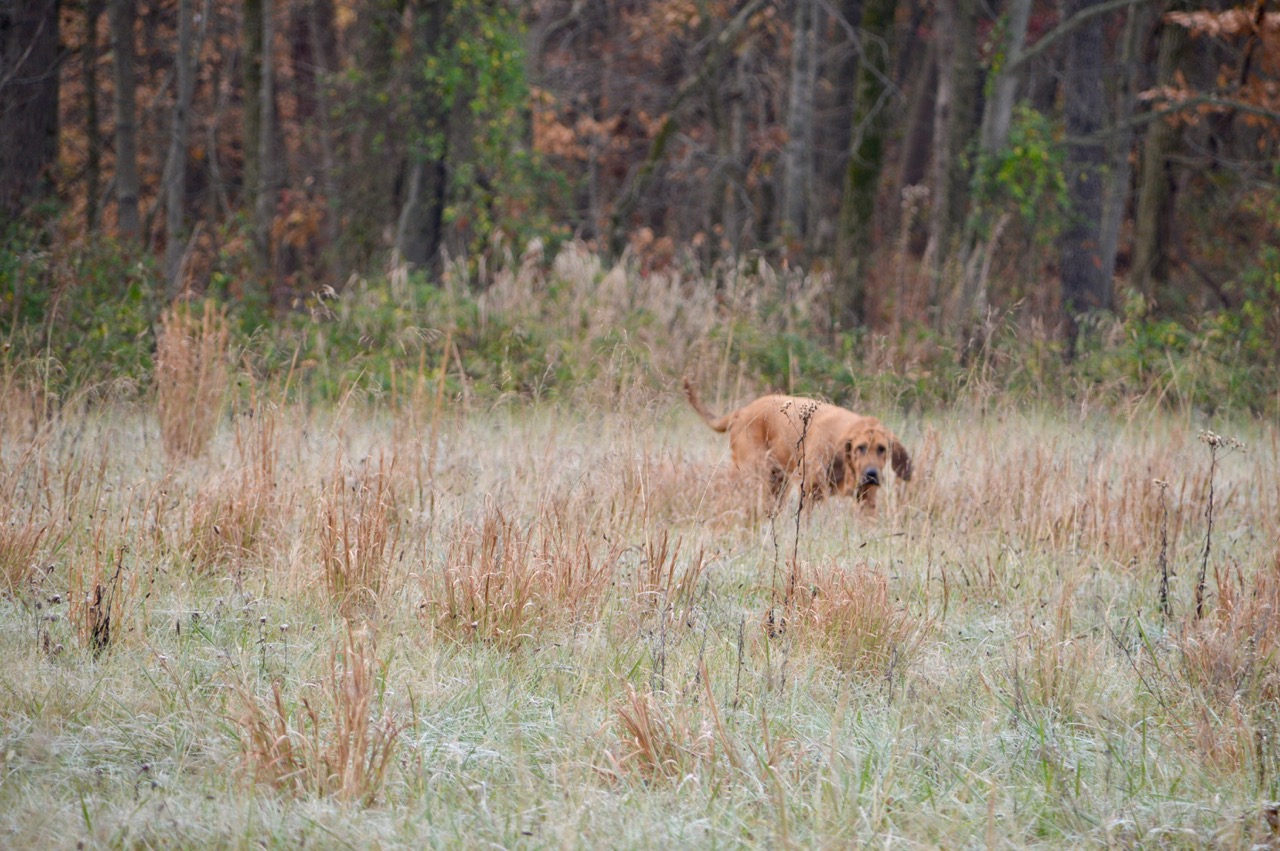 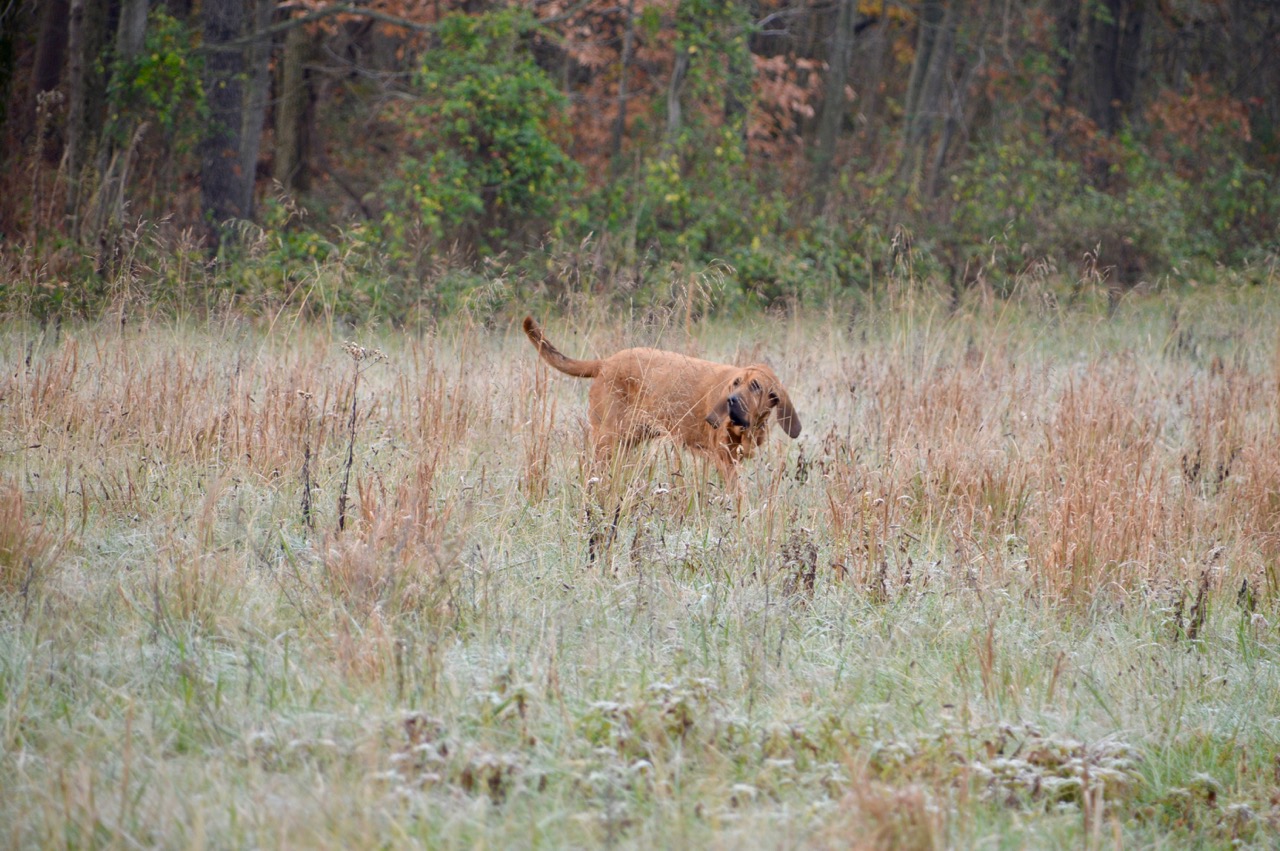 There is nothing fast about Stella most of the time ... every time she walks it is slow and easy. 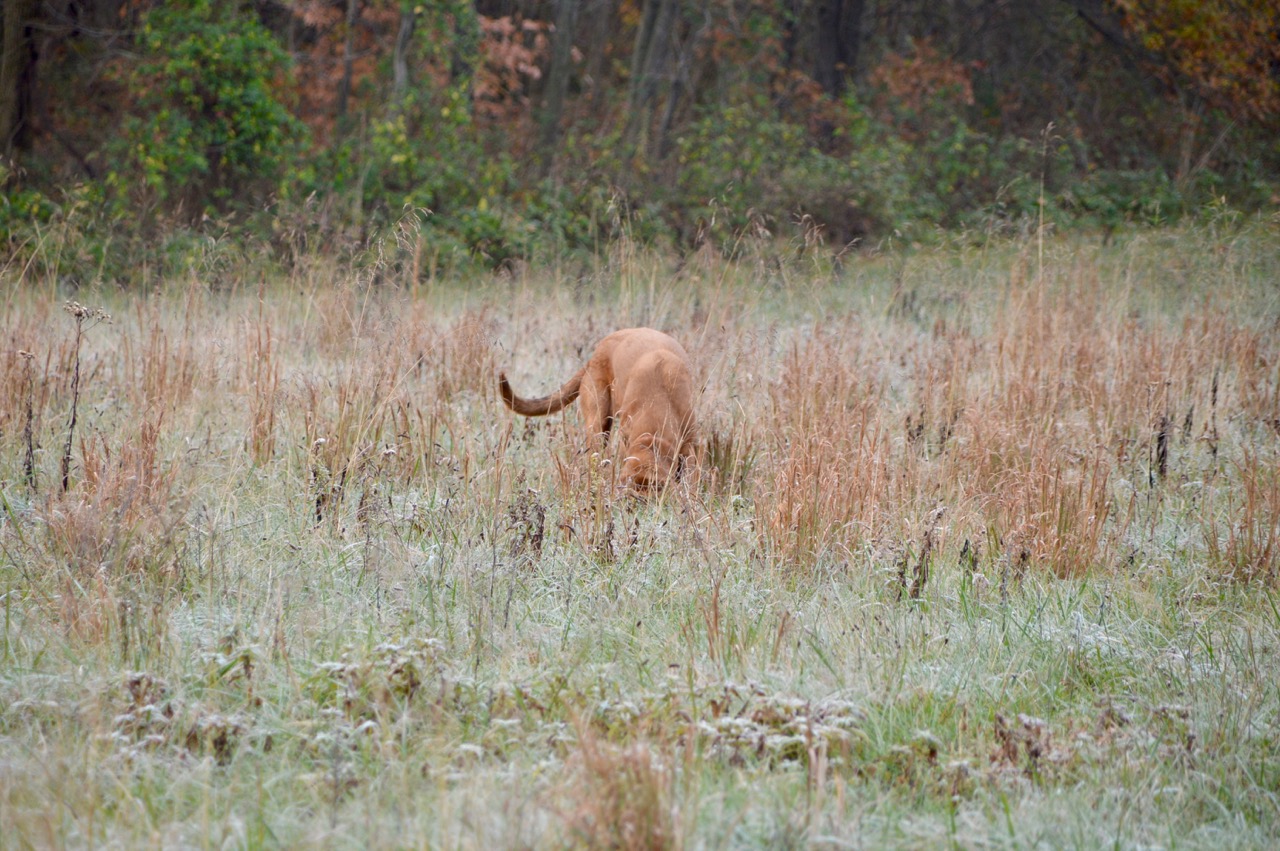 Just as Sadie and Stella met on the path, the trotted toward home but most likely to get to the new deer scat before I could stop them. 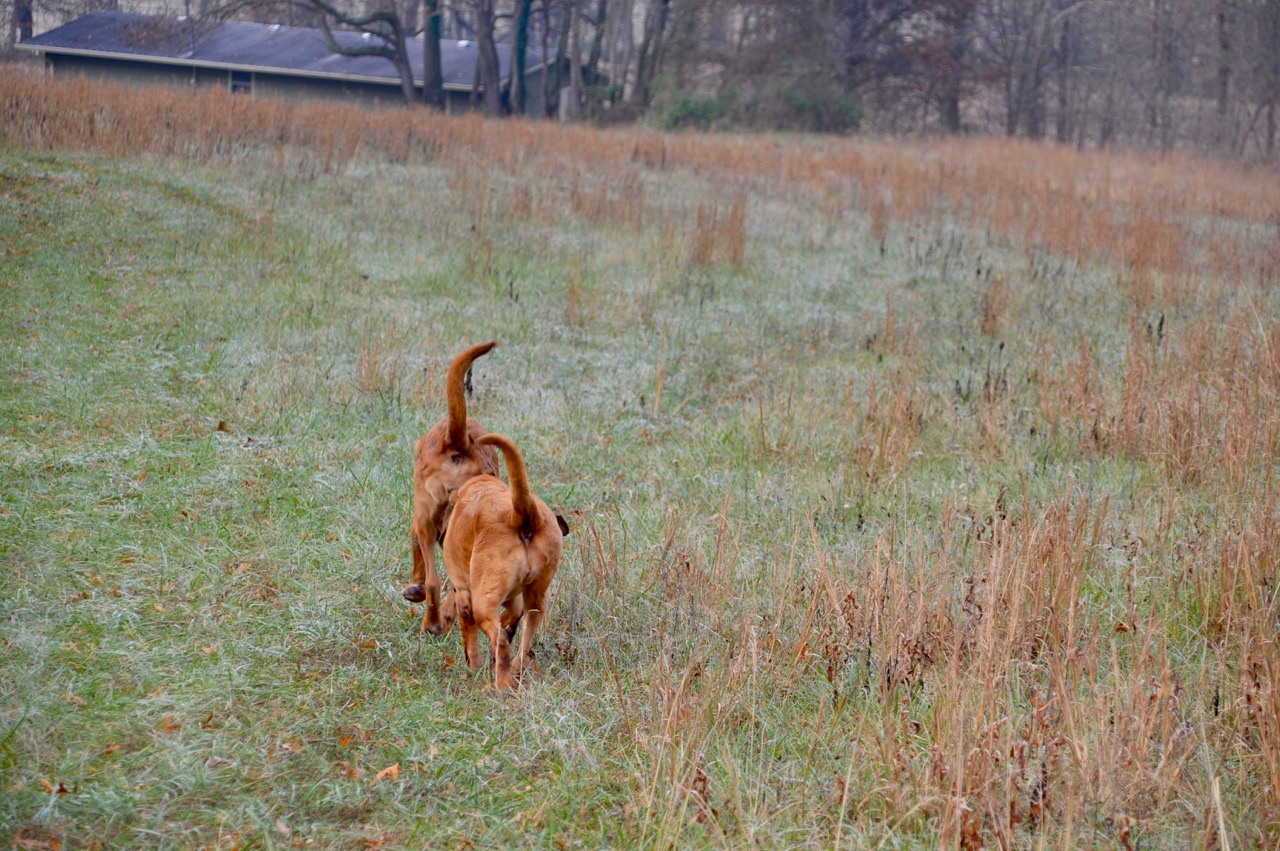 I had to remind myself this morning that any new leaves that fall to the ground in back, would not be raked. This area is raked for the last time and very few leaves are on the tree limbs above. The backyard is officially ready for it's first snow. 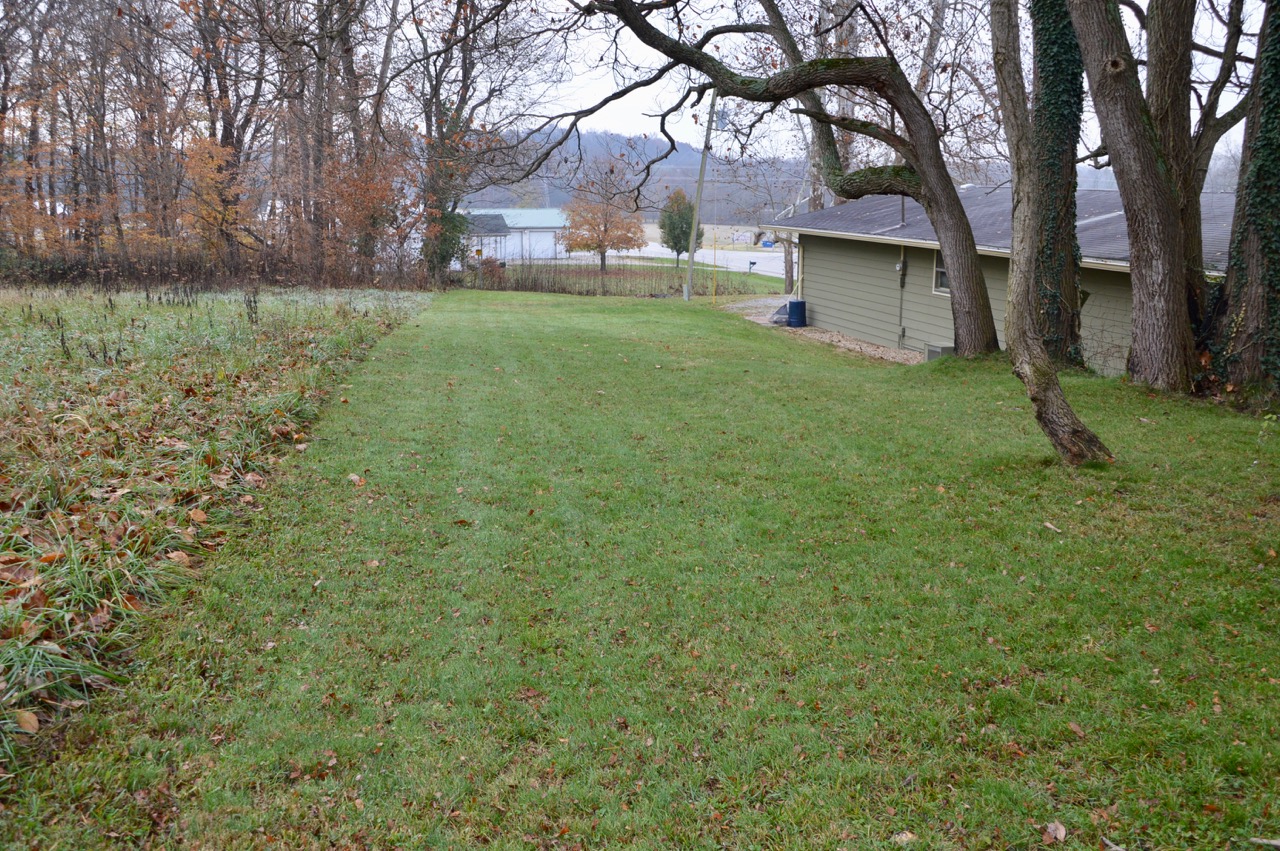 The hounds wanted to make sure that I raked all the leaves away from the fence and tree trunks. Once they approved of my work they trotted for the house. 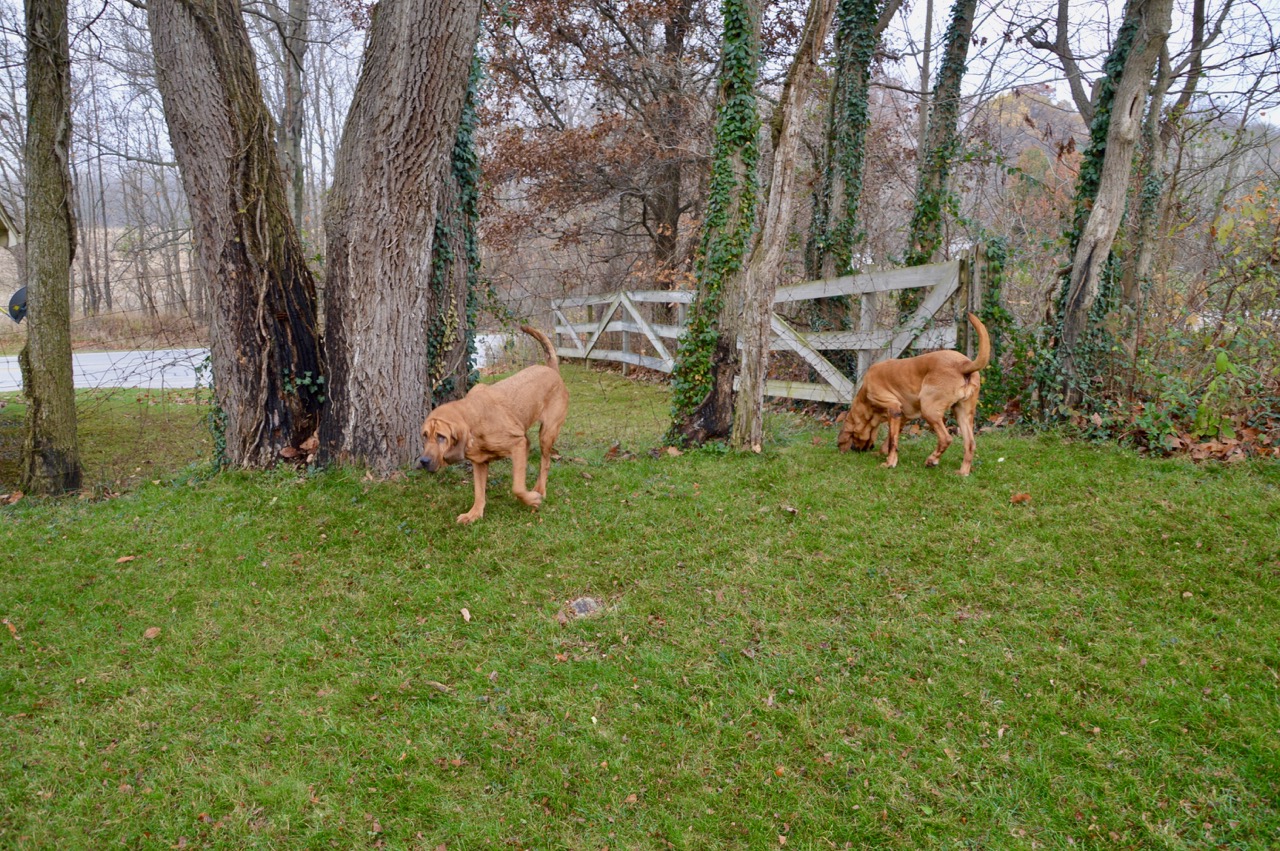 With no wind I must admit it was tempting to get an early start on Phase 3, the final phase of the 2017 Leaf Project. It just didn't seem right to be outside raking leaves at 9am in 35° with a wind chill factor lower than that. I'll waited until the hound finish lunch before I got started about a 15° increase in warmth. I knew with the new large rake it wouldn't take me that long to finish the job. 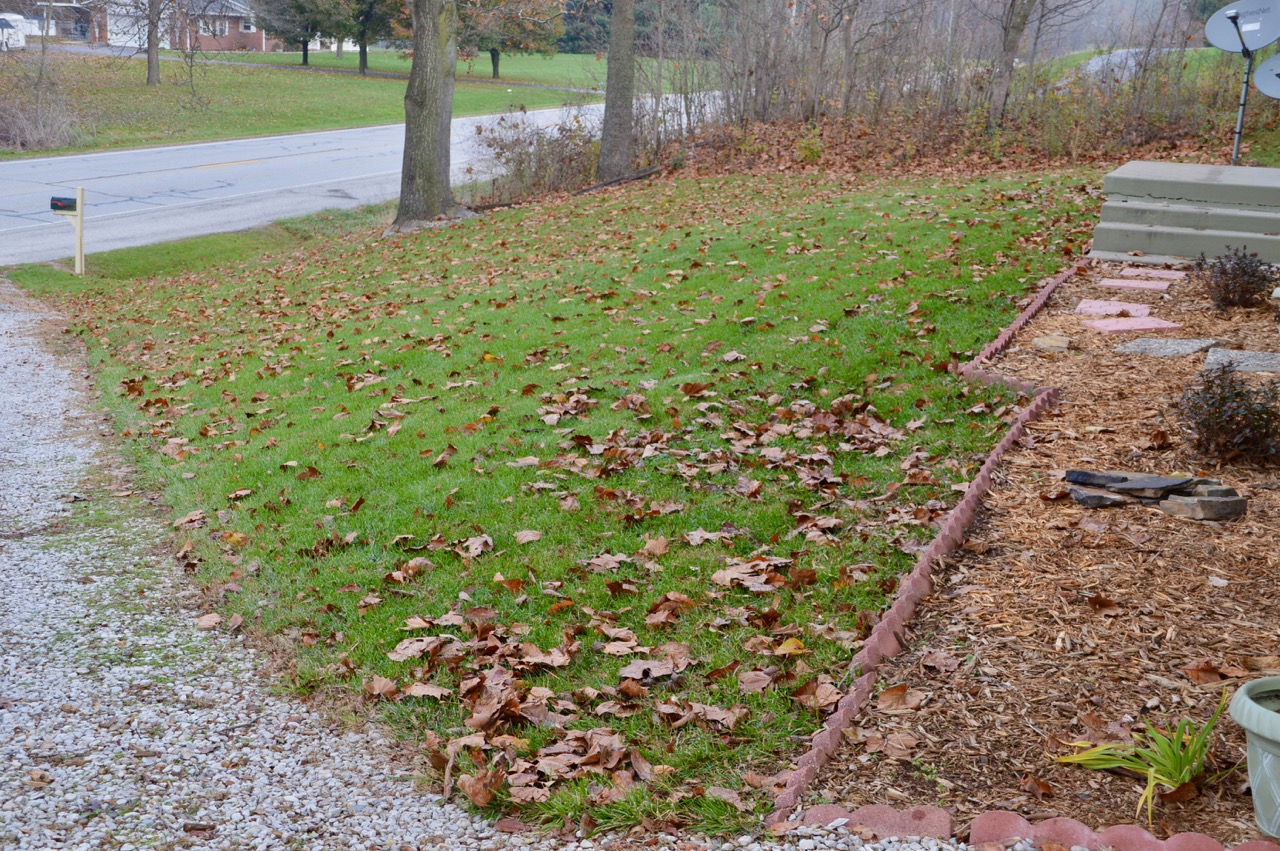 Next spring I'll be straightening those edgers and backing them up with more dirt. It just shows how  much of the ground moves over the years. I am also thinking about making a new edge to the driveway possibly make it a little wider and changing the angle a little bit. With that dirt being a mixture of hard clay mixed in with gravel base that idea may not last long next April.

It was sometime close to 11am where Sadie was giving me her 'stare' that is usually signifying it's time for a walk. Walking now was not the usual time and was a strange request. Then I had my answer, Stella started howling which led Heidi to barking ... it was time for lunch.

Now 11am may be a little early for their lunch since they were fed around 7:15am but their stomachs didn't change a few weeks ago when Daylight Savings time 'fell back' ... so to them it was noon and time to eat.

This gave me a chance to go outside and check to see if it had warmed up enough to start raking leaves earlier than planned. My iPhone showed 35° but the old accurate carport thermometer was up to 42°. 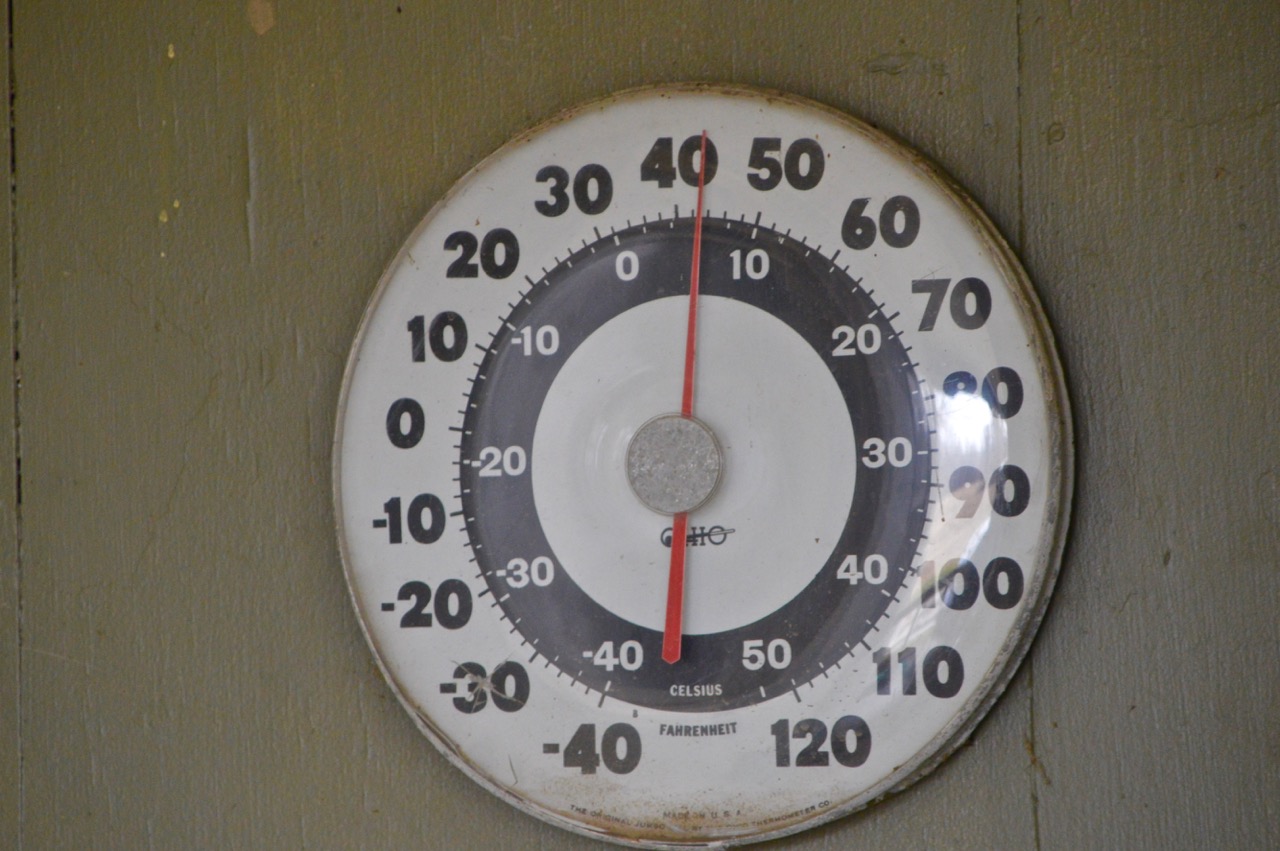 Heidi agreed with me within a few short steps toward the driveway ... it was damn cold and not even close to 42°. With a slight wind from the SE not only was it making it feel colder than ever it also changed the leaf plan from raking across the yard to down the yard ... I always follow the direction of the wind when raking. 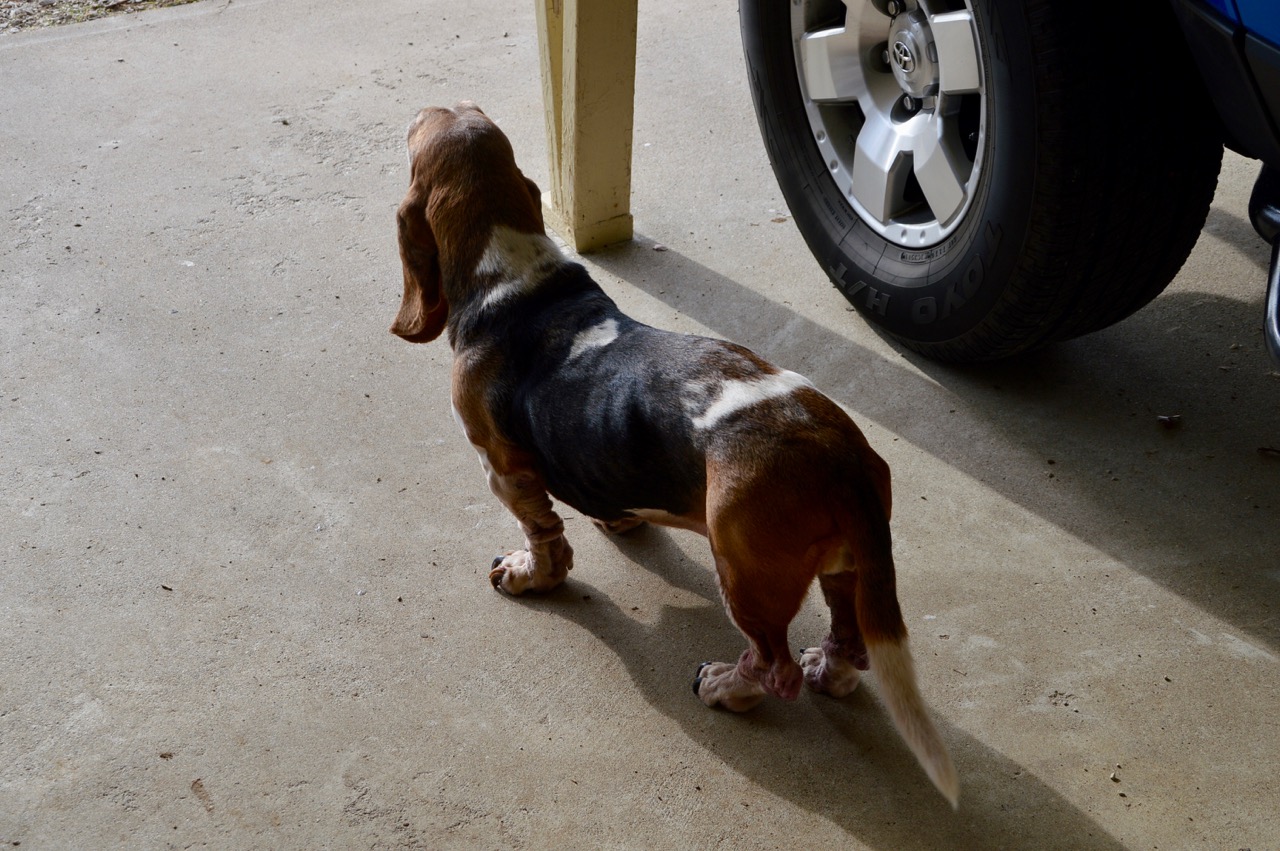 Heidi got no closer than this before turning around and running back inside. She decided it was way too cold to pee, that she could hold it and her Marmot sleeping bag was much warmer than standing outside freezing, trying to decide what to do. 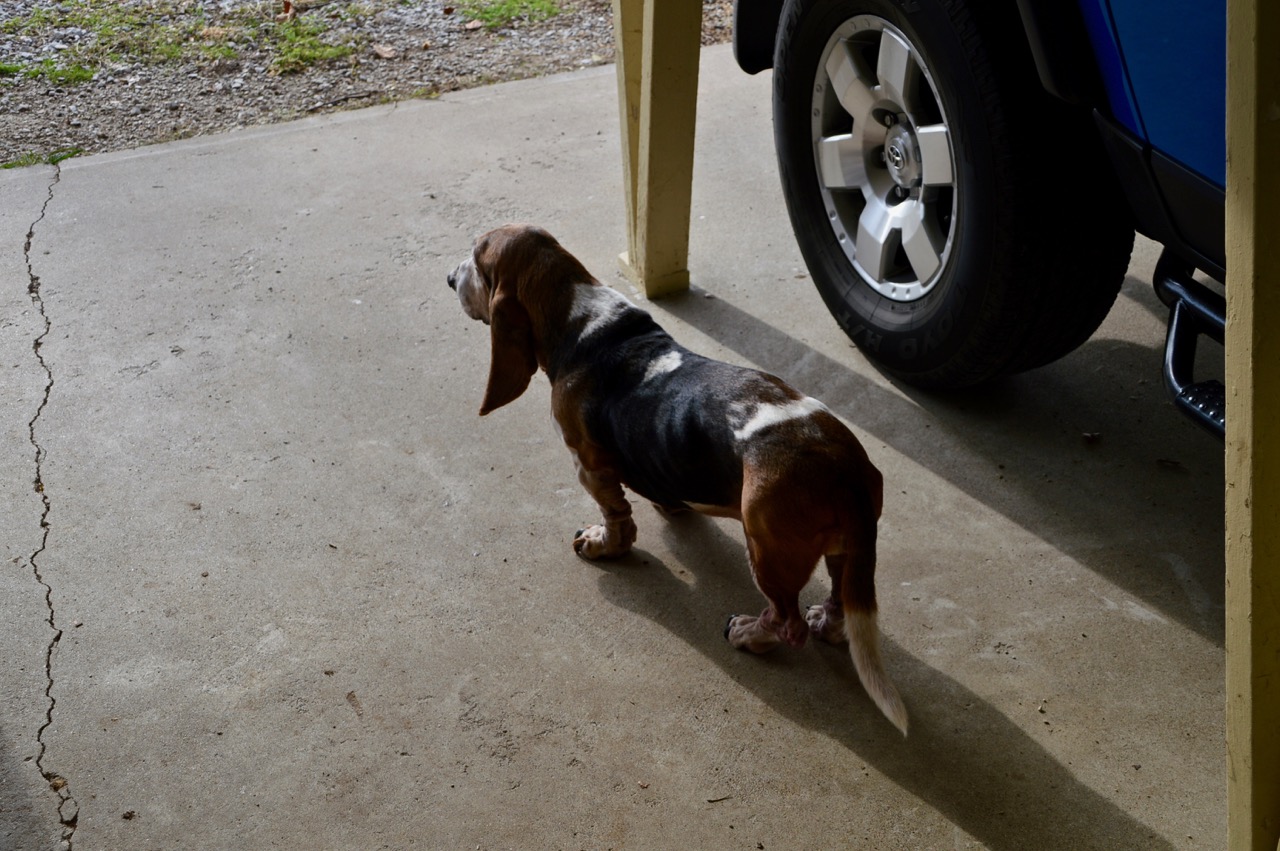 I had the feeling it was not going to get near the forecasted high today. I almost talked myself out of finishing the lawn raking but with rain tomorrow and the Z4 parts arriving on Monday, I knew I had to finish this front yard today. So I put jackets on in layers and it wasn't long before my red North Face jacket was laying on the porch.

This took me only 1 hour and 5 minutes. That included clearing the culvert of leaves so any rain, snow or melting ice can pass through under the driveway. 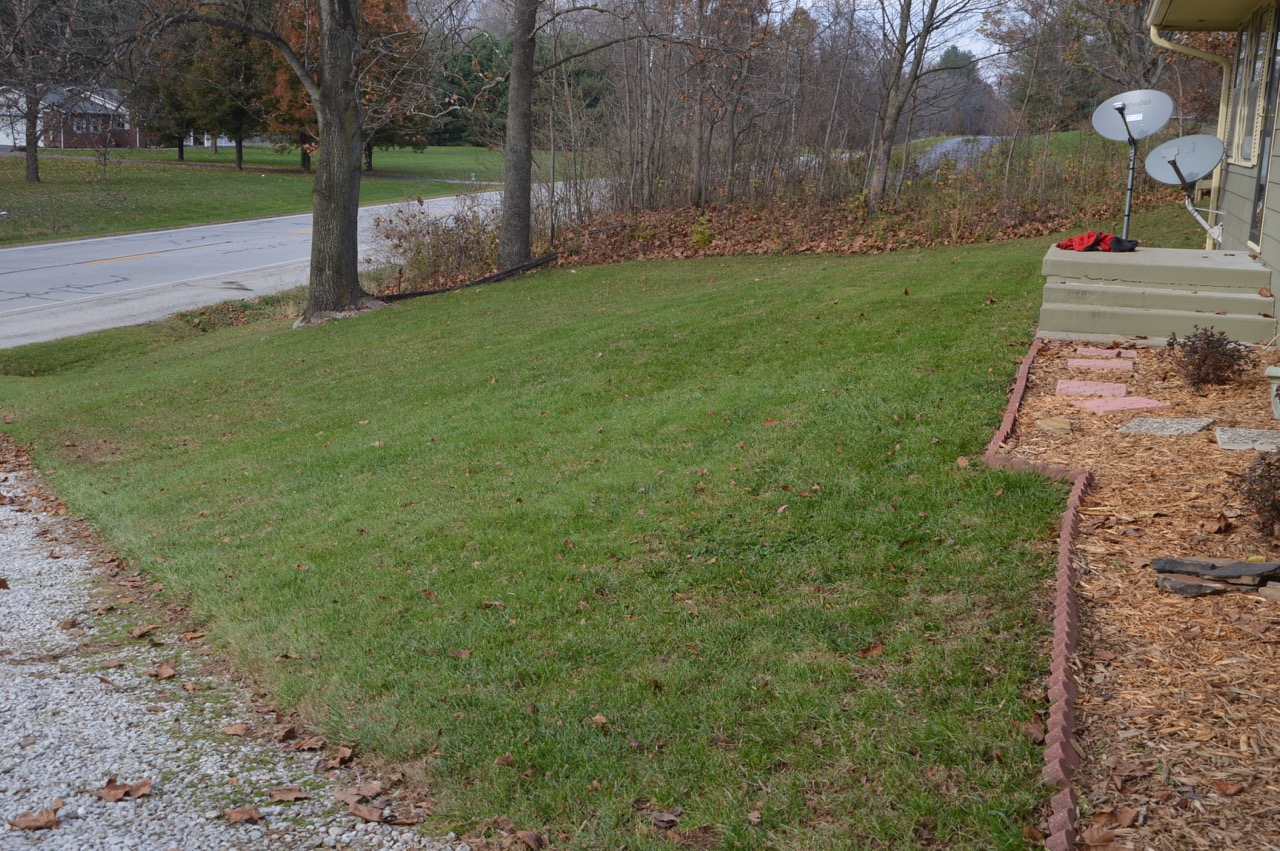 I went inside and grabbed the two 20v batteries, pulled my new toy out of the shed and blew the few leaves left in the driveway, down to the highway letting traffic blow them away. Actually it took only one semi-truck passing by for those leaves to disappear.

With what battery I had left I started blowing the leaves along the drive over and under the fence to the bank where they were dry out and be burned in March or April as we burn off the bank. 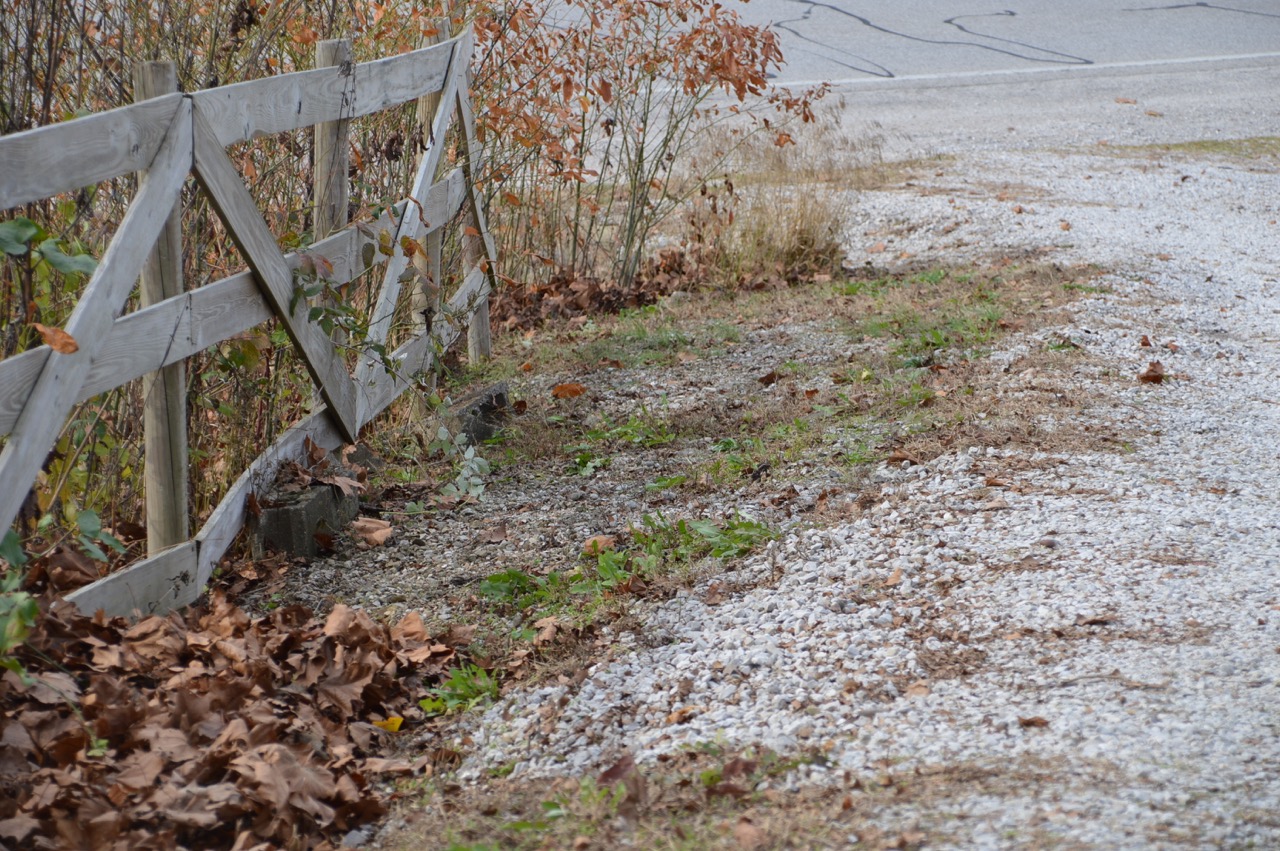 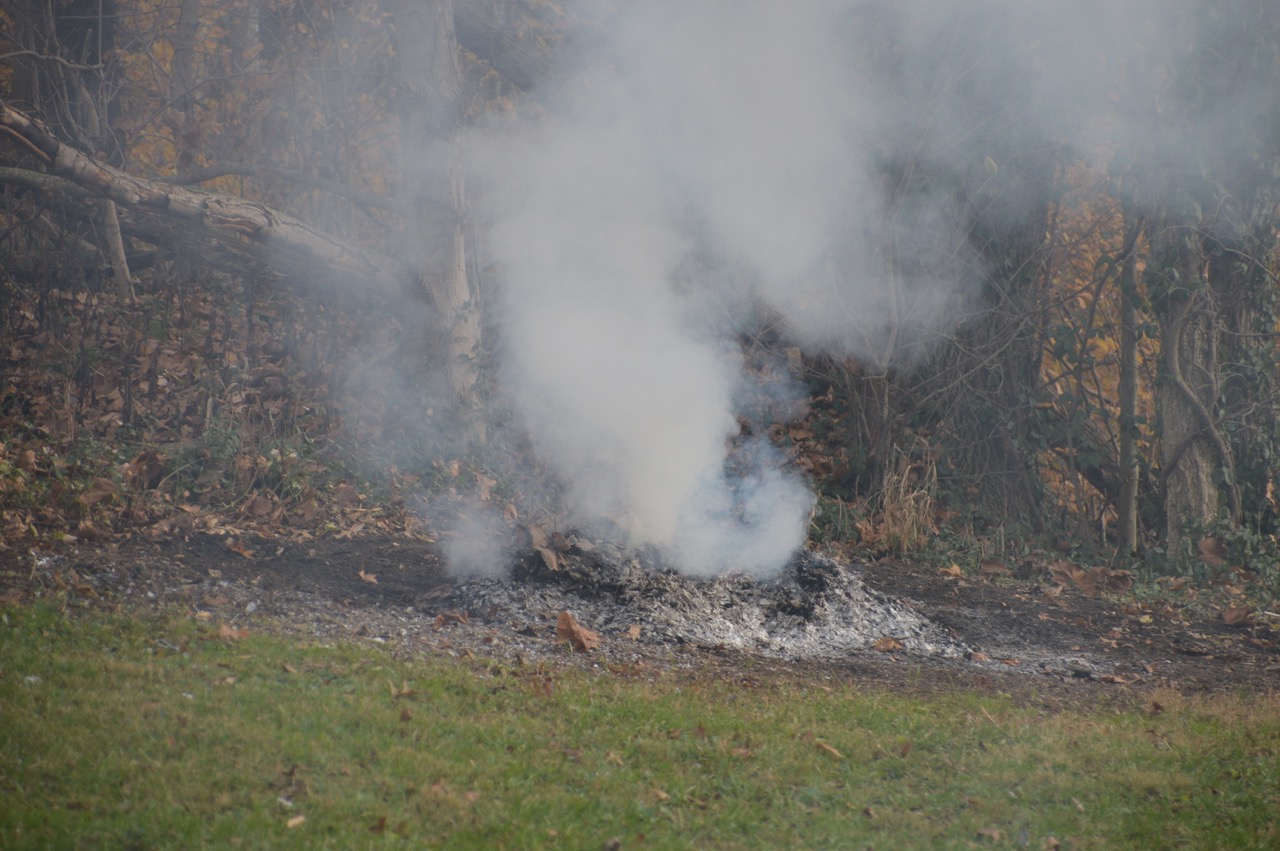 Another productive day here in 'the tropics' of Southern Indiana.
By Steve at 1:59 PM