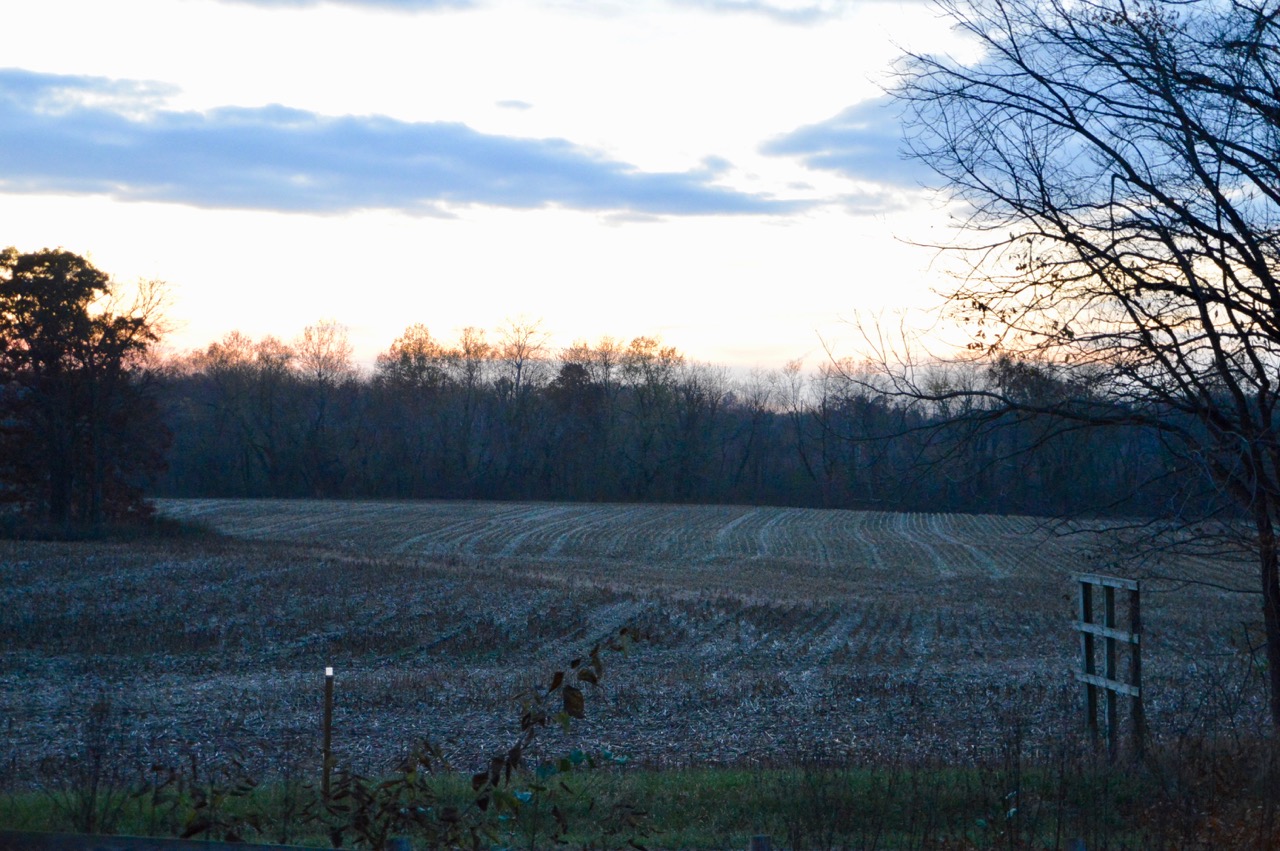 It was just before 6pm and much darker than any of these photos show. In fact I could barely make out what it was with my eyes. I had just started to step away from the computer, and was about to close the blinds, when I noticed a dark shadow that looked bigger than dead ragweed in the field. So I tip toed to my camera while Sadie and Stella were sleeping. Not until I zoomed in on that shadow at 200mm did I see this ....

Not wanting to startle the deer, I kept my blinds lowered but open. I shot this through the mini blinds, and two windows. You can see how close she is to the yard over by the corner property pole. 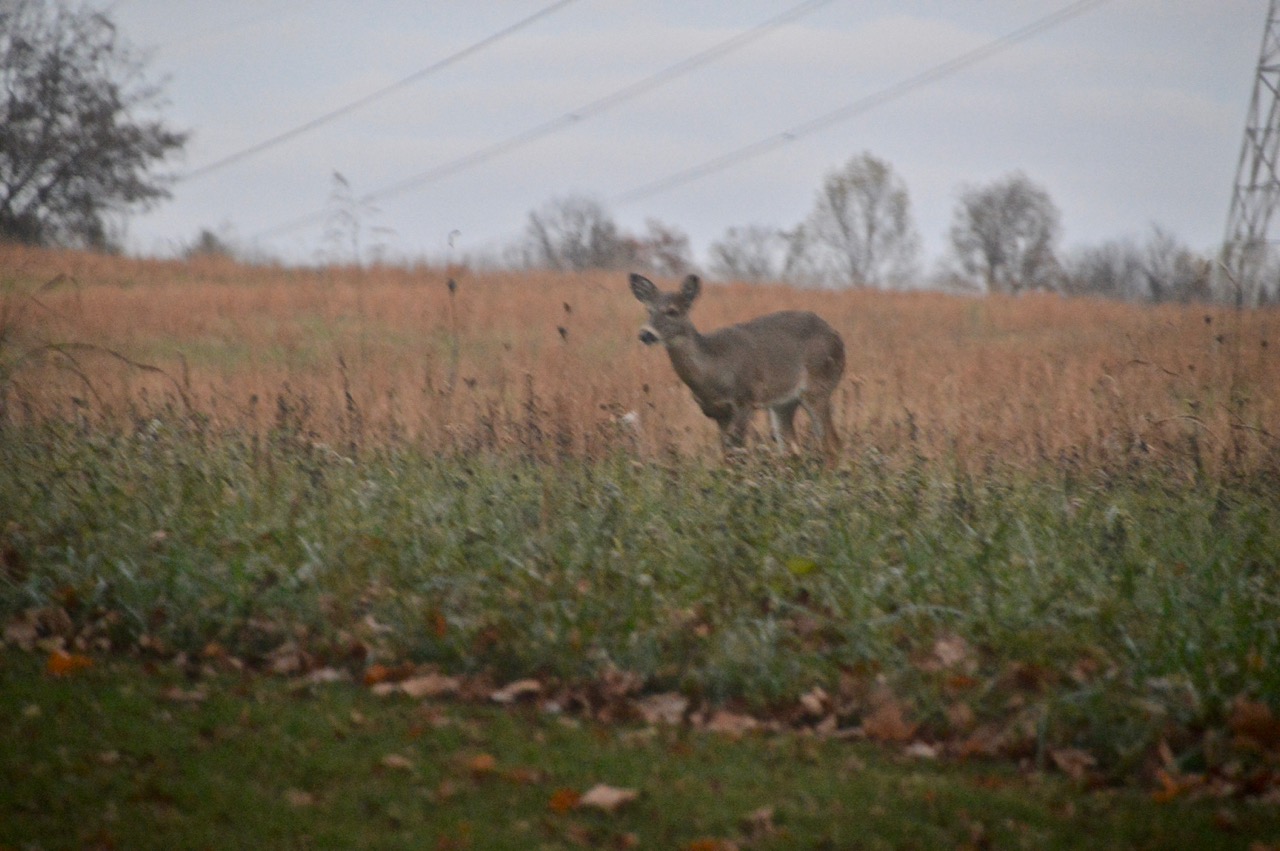 She didn't mind me taking pictures from the inside as she stayed there eating for a few minutes, slowly moving toward the corner of the yard. Stella was still sleeping at my feet. In fact I had to step over her to get a better angle out the window. 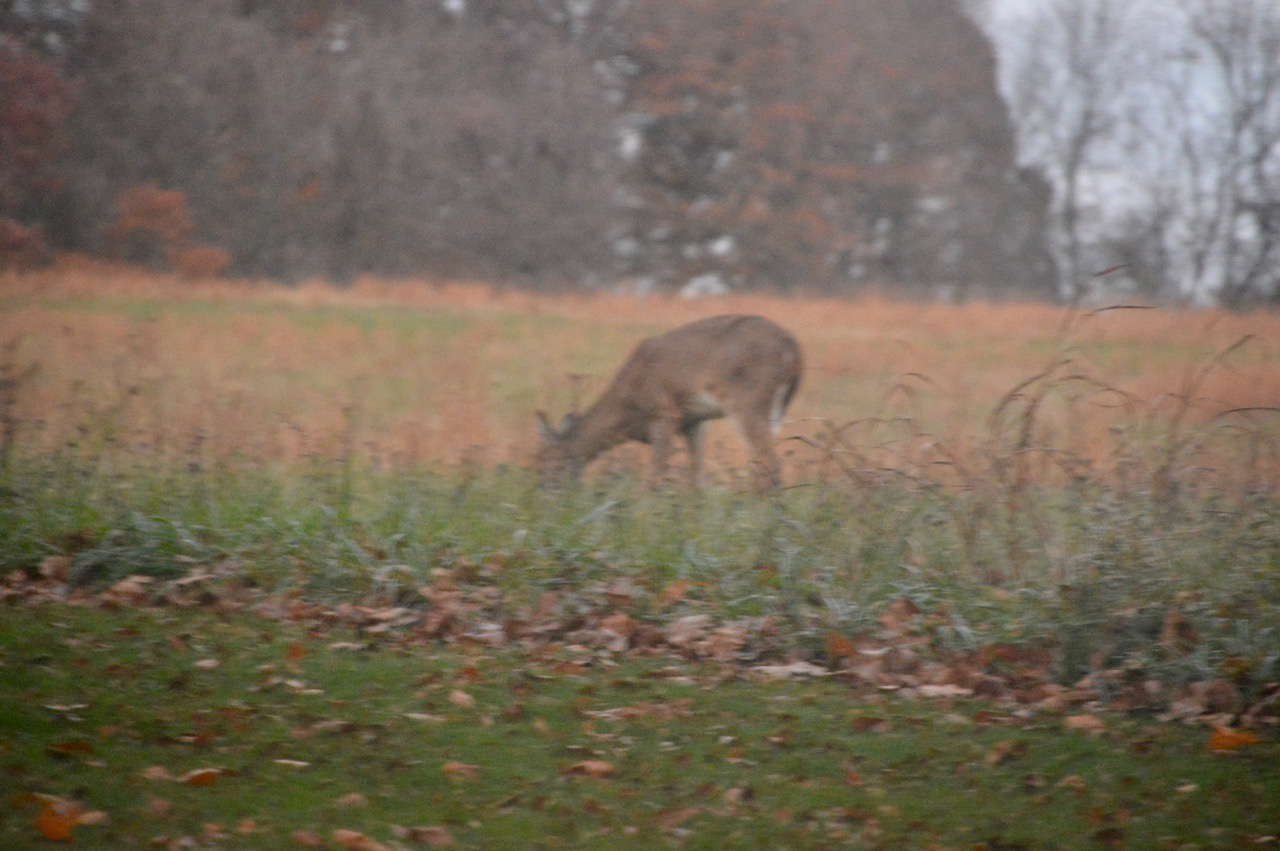 By this time as she slowly walked past the corner of the yard and actually in the exact area that Stella has been checking out lately right before she steps inside the property pole at the end of her walks ... I saw a 2nd one following her. 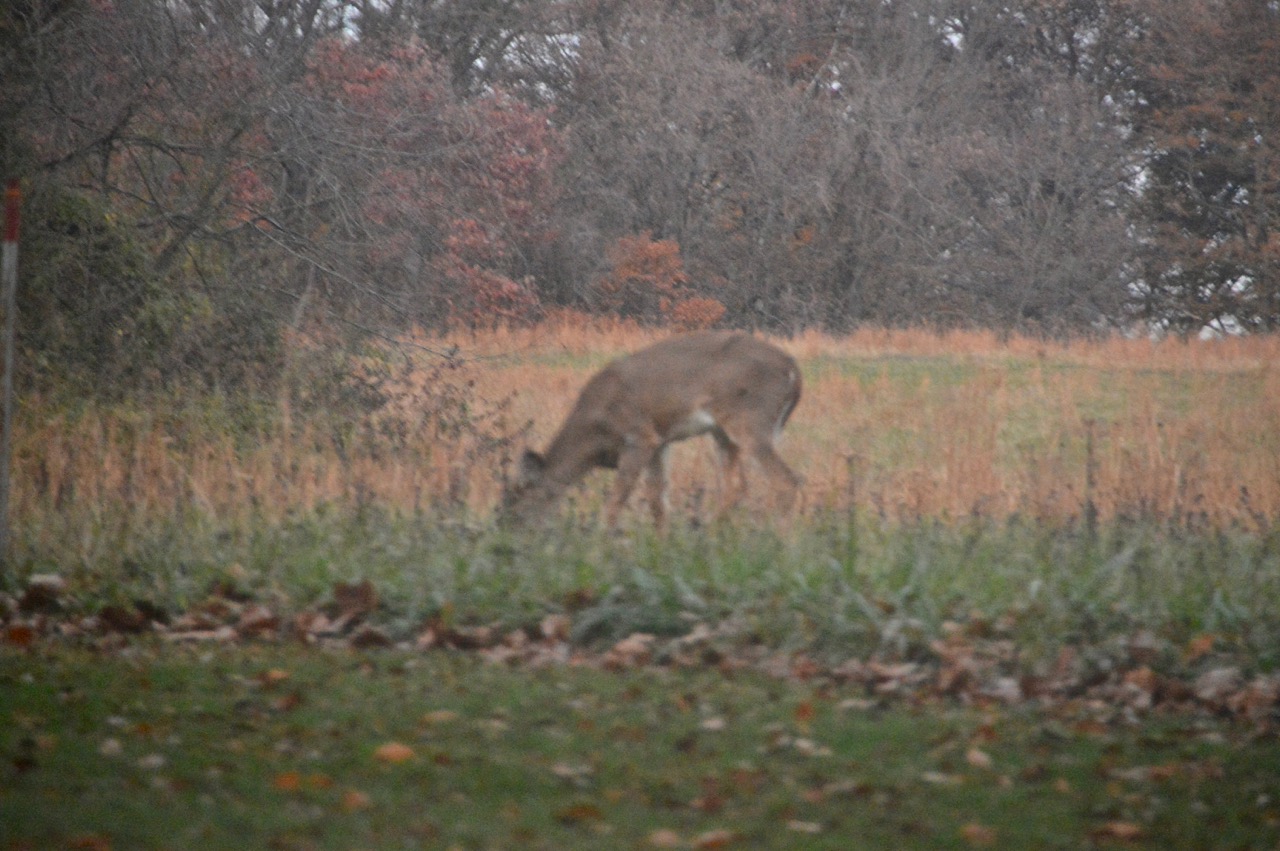 What would Sadie and Stella do if they knew there was a deer this close to their yard? 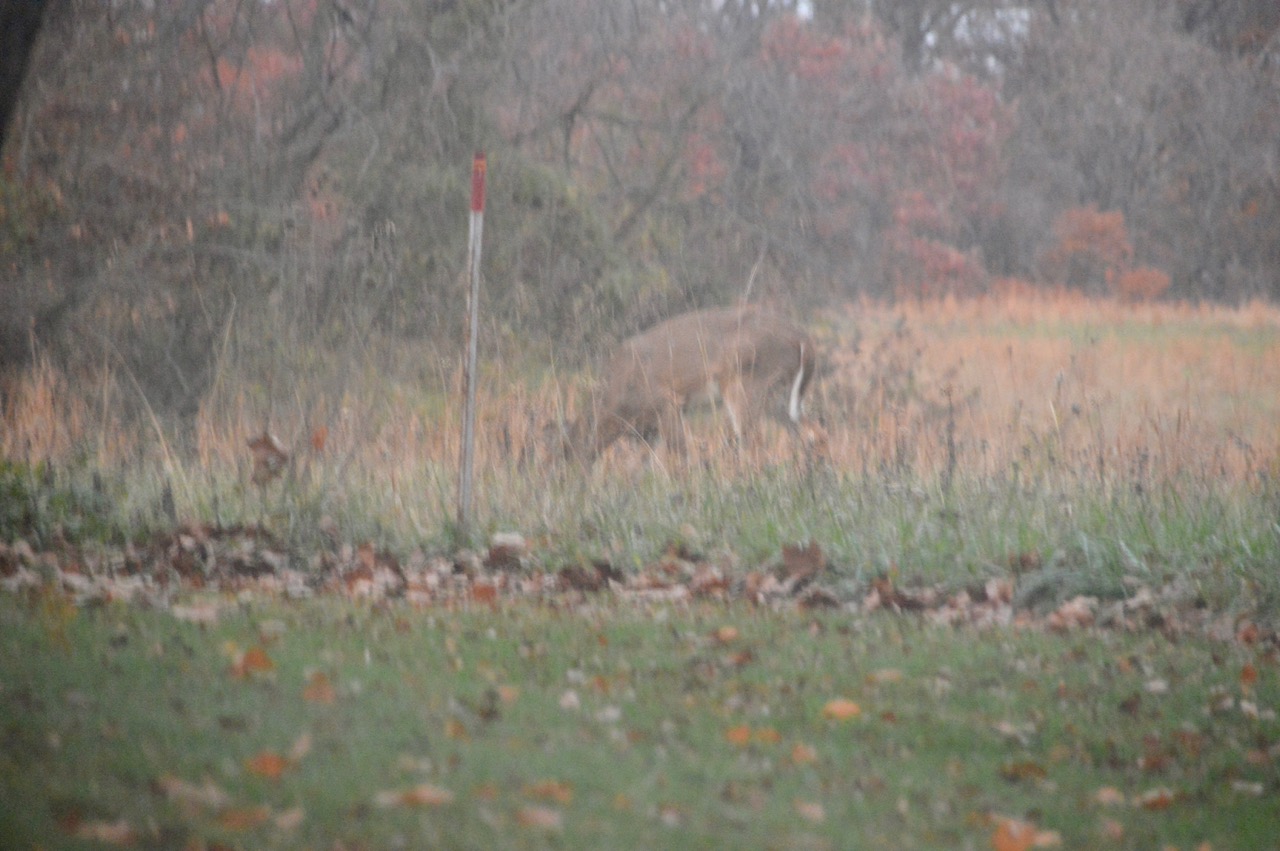 By this time I had quietly and slowly raised the mini blinds so the lens was only shooting out the inside window then the storm window. It was much darker than the picture shows. 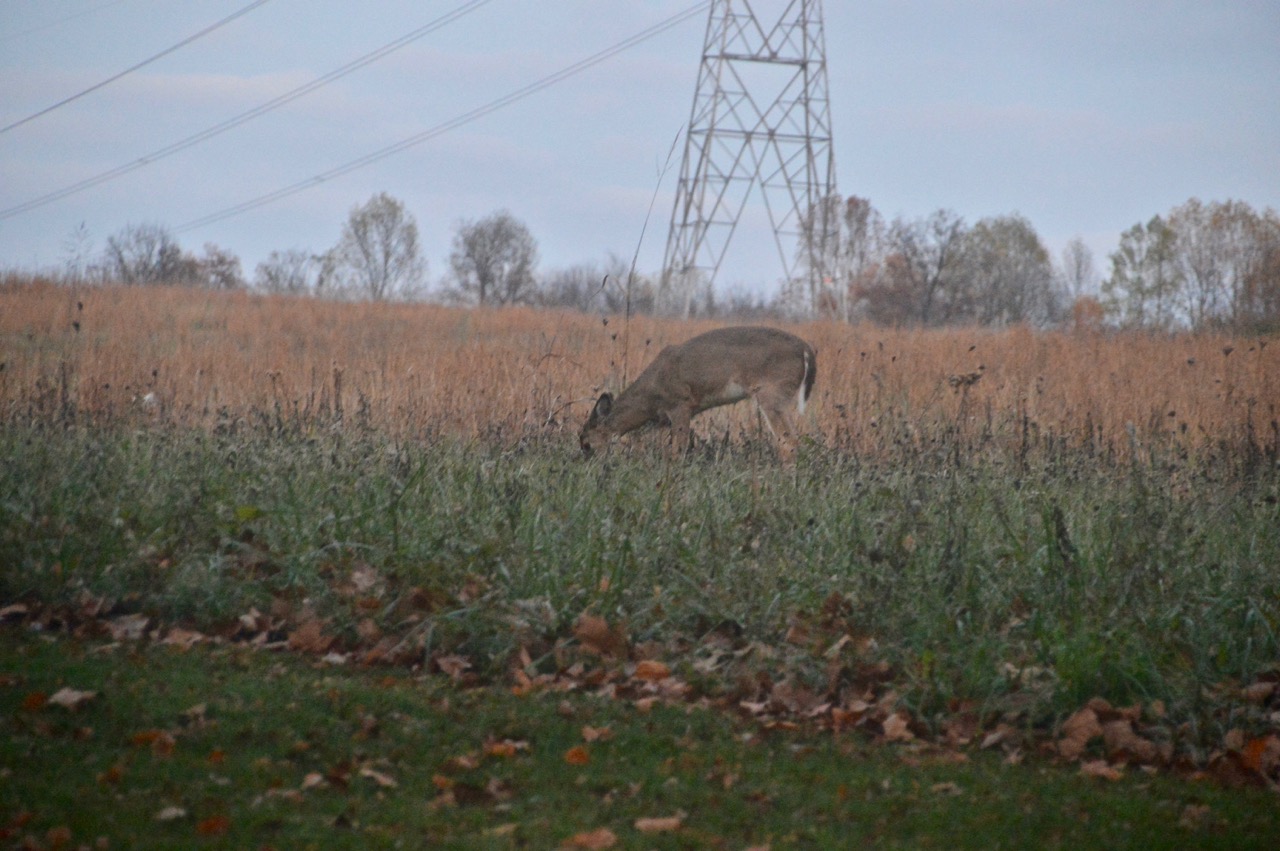 I decided it was time to take a chance and walk outside. Of course when I headed toward the door, both bloodhounds woke up thinking they were going outside too. I whisper to them to stay inside, shut the screen door quietly and walked to the corner of the house. By the time I got there, hearing the beep of the camera focusing ... she was staring right at me. 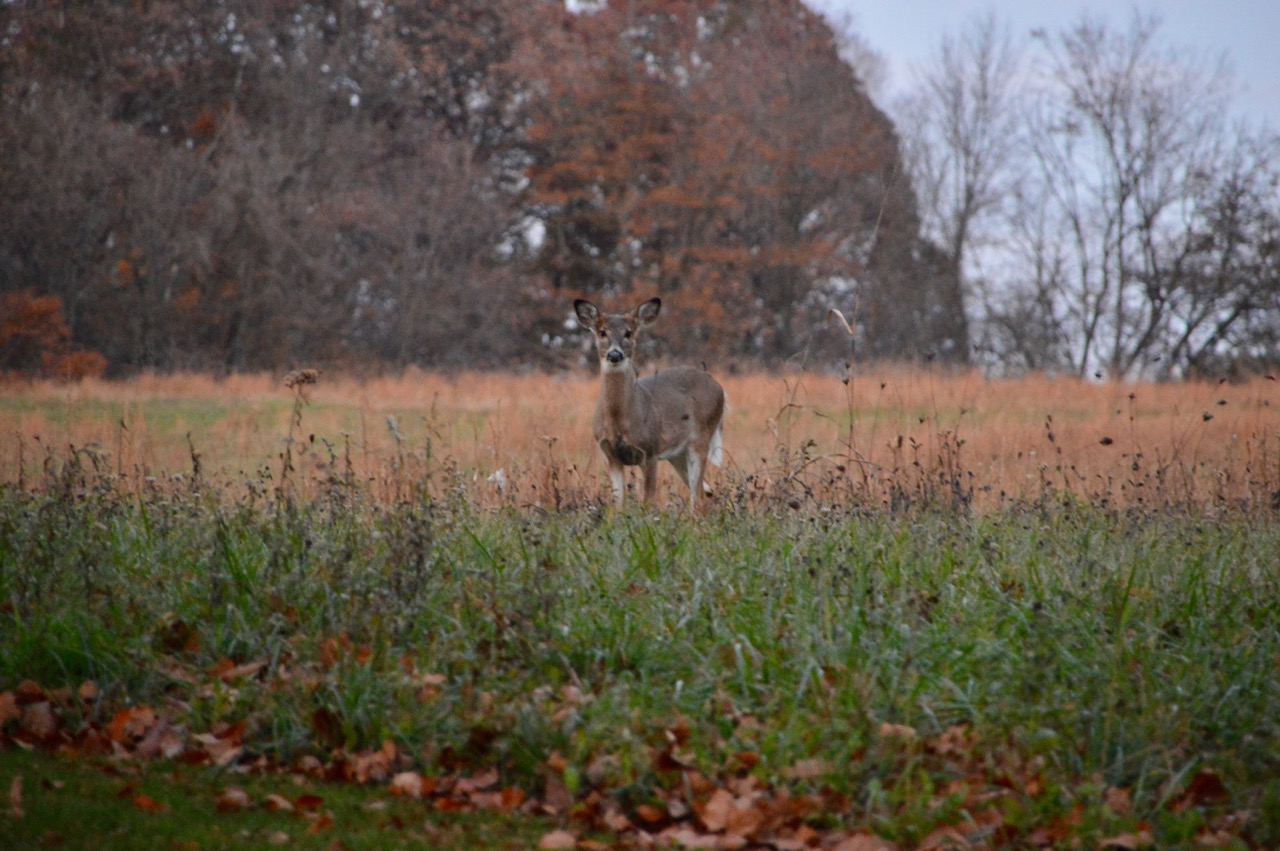 We stood there quite a while it seemed looking at each other. I thought I'd back the lens out a little bit to prove to the hounds just how close she was to the yard. 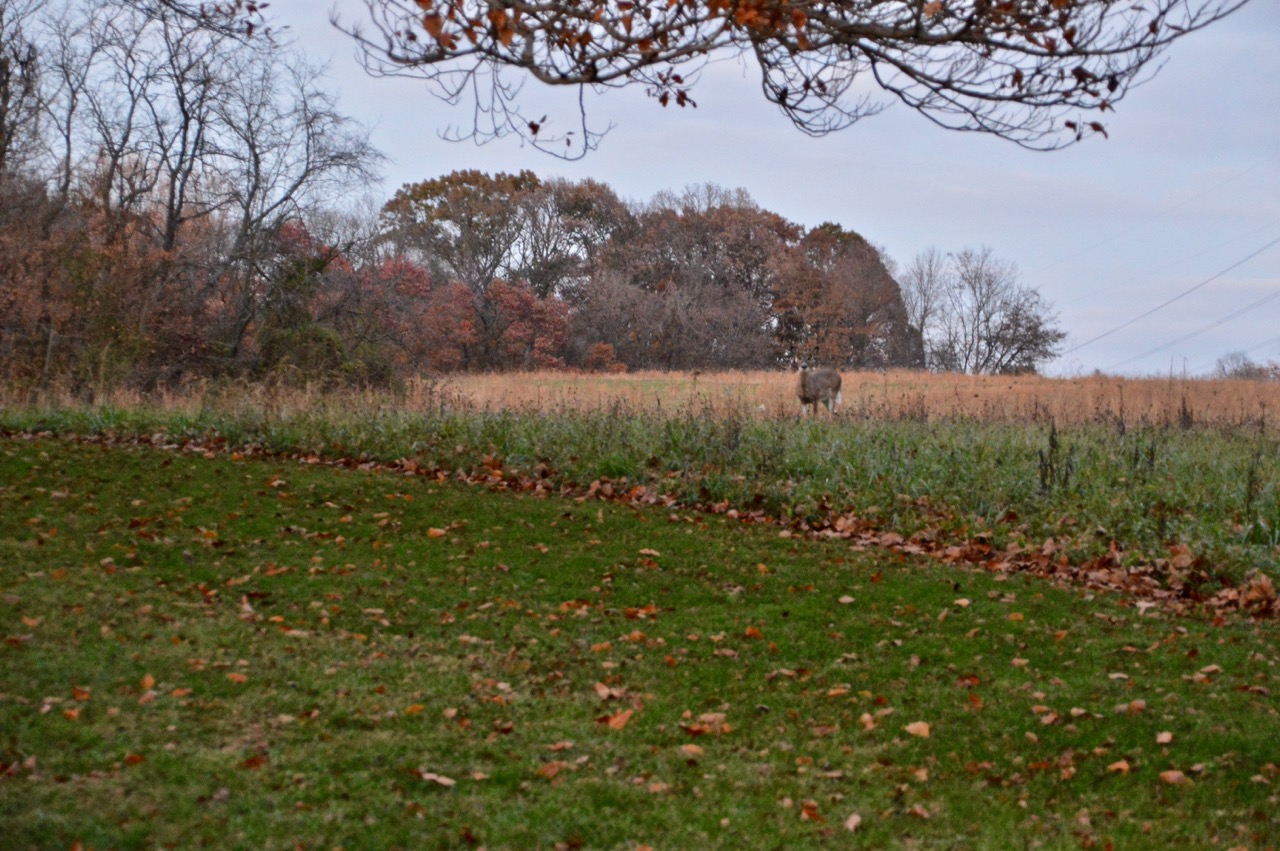 I started walking through the yard toward her ... being careful not to step on any leaves to scare her off. She continued to stare at me as I stopped, focused and took another photo. 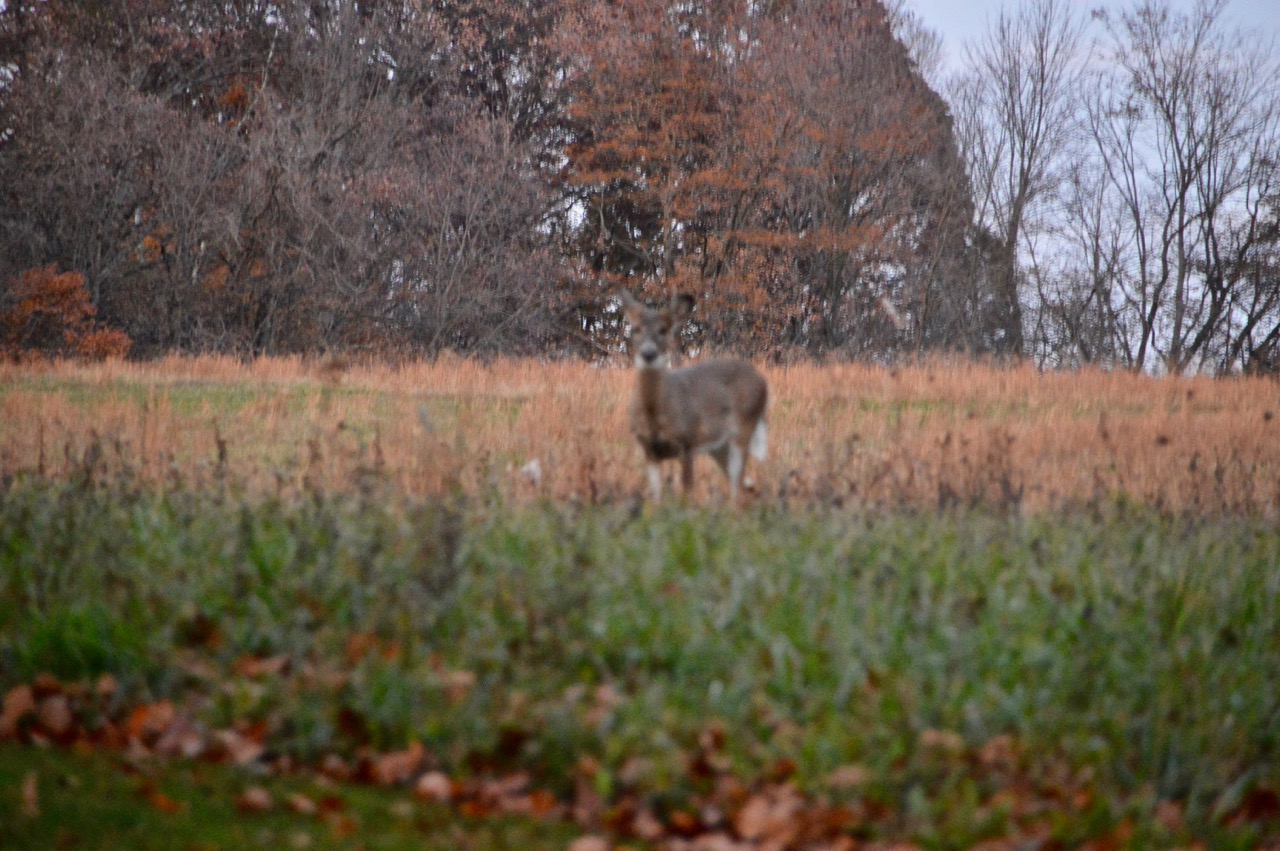 Not until I intentionally yelled did she take off sprinting for the woods to the north at the other end of the field. The first deer heard what was going on and decided she had better head home also. 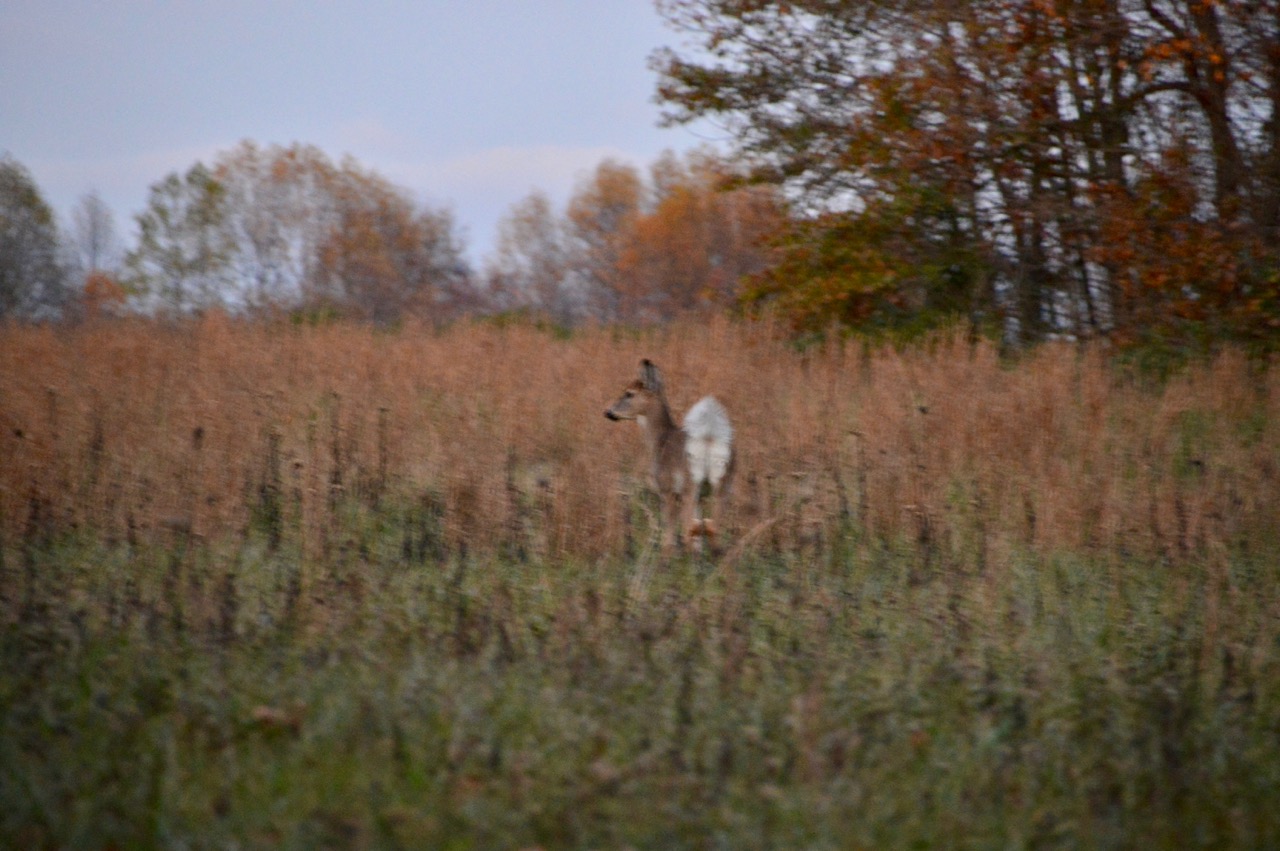 The second deer wanted to check one last time to see if I was going to chase her. 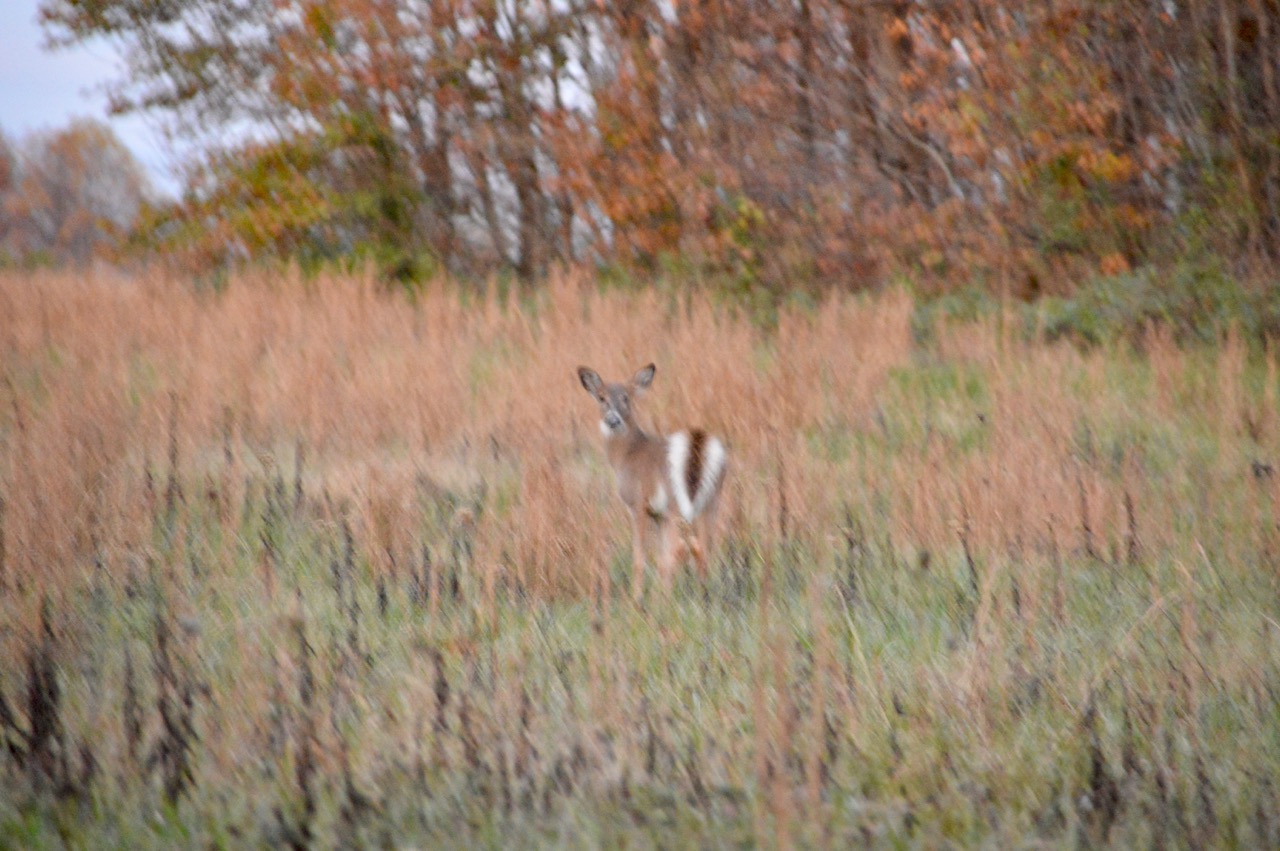 It was so dark I had to hold the shutter down pretty long before it would focus. I knew without the help of a tripod these pictures would be blurry and out of focus but I didn't want to miss the chance of taking some sort of pictures of them.

When I walked back to the house, Sadie and Stella were standing at the screen door waiting to hear about all the excitement they missed.

You never know when things might turn exciting here in 'the tropics' of Southern Indiana.
By Steve at 4:31 PM