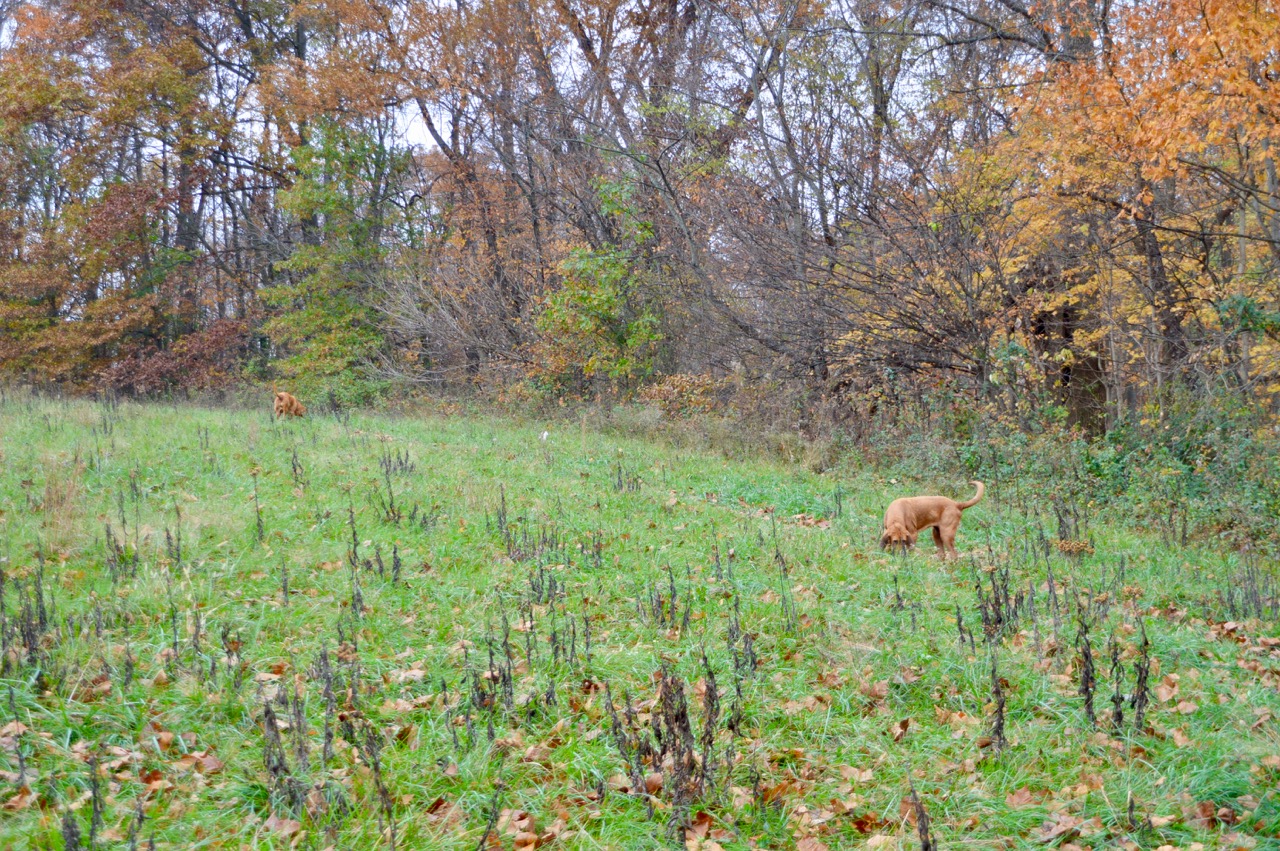 There was a small 'pocket' of no rain if we hurried this morning. With Stella sprinting out into the field to get started, Sadie hung back to see if I was going to give the official okay that the morning walk would take place. The rain was so light I couldn't hear it hitting my jacket but could see a few drops where the rain had hit my sleeve. I decided to take that chance.

You can see how light the rain has been before we made it outside. At least the temps were back into the 40's which felt like a heat wave. It had the feel of one of those days where there isn't a lot of rain but just enough steady rain to keep us all inside for the day. Heidi requested I cover her up with the Marmot sleeping bag, where she will only leave to eat lunch. 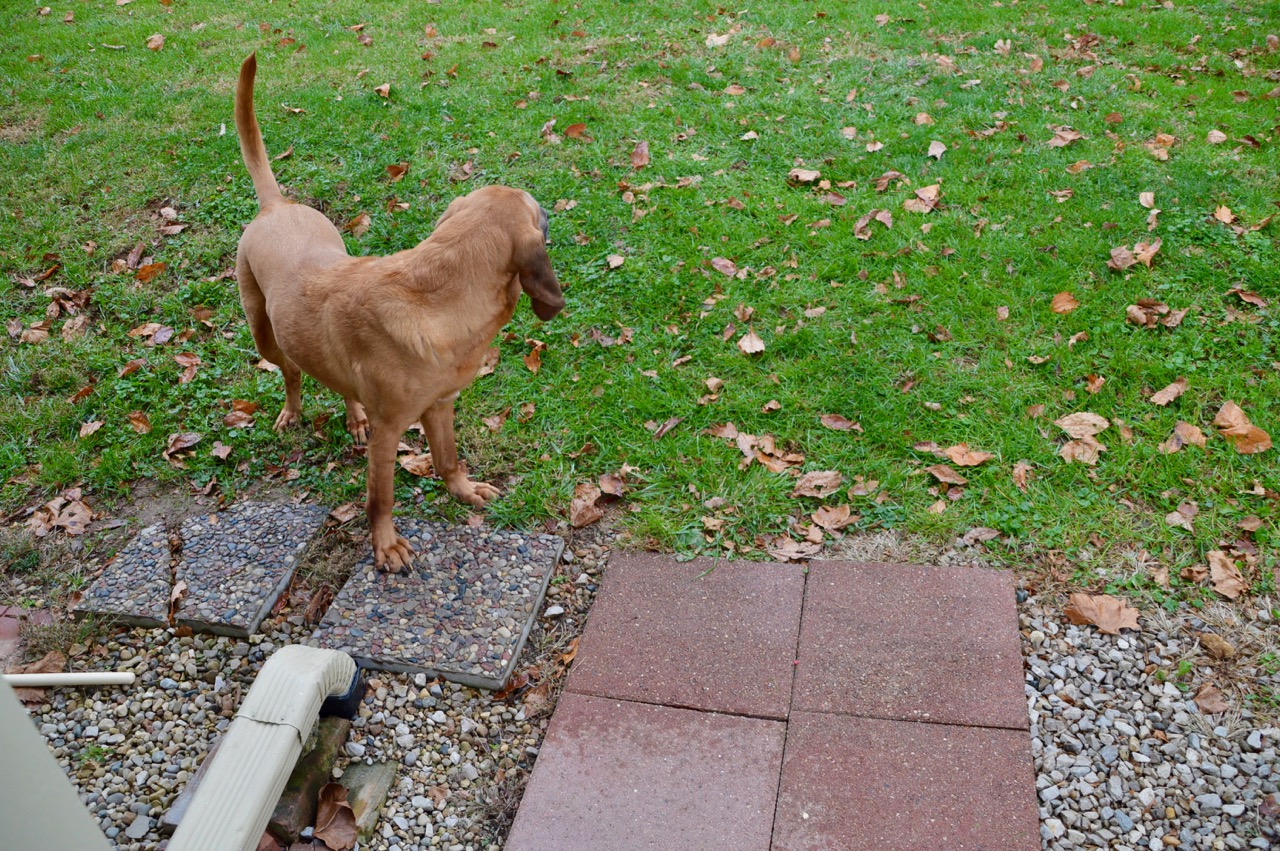 Once I started toward the field, Sadie sprinted all the way to Stella ... the walk was officially on. Both hounds had active noses and were moving pretty fast from scent to scent. It seemed as if we had just missed the deer by minutes by the way the hounds were acting. Not knowing if we would have to cut the walk short due to rain, I really didn't want to have to chase down the hounds if they were running after deer or what they thought were deer tracks. 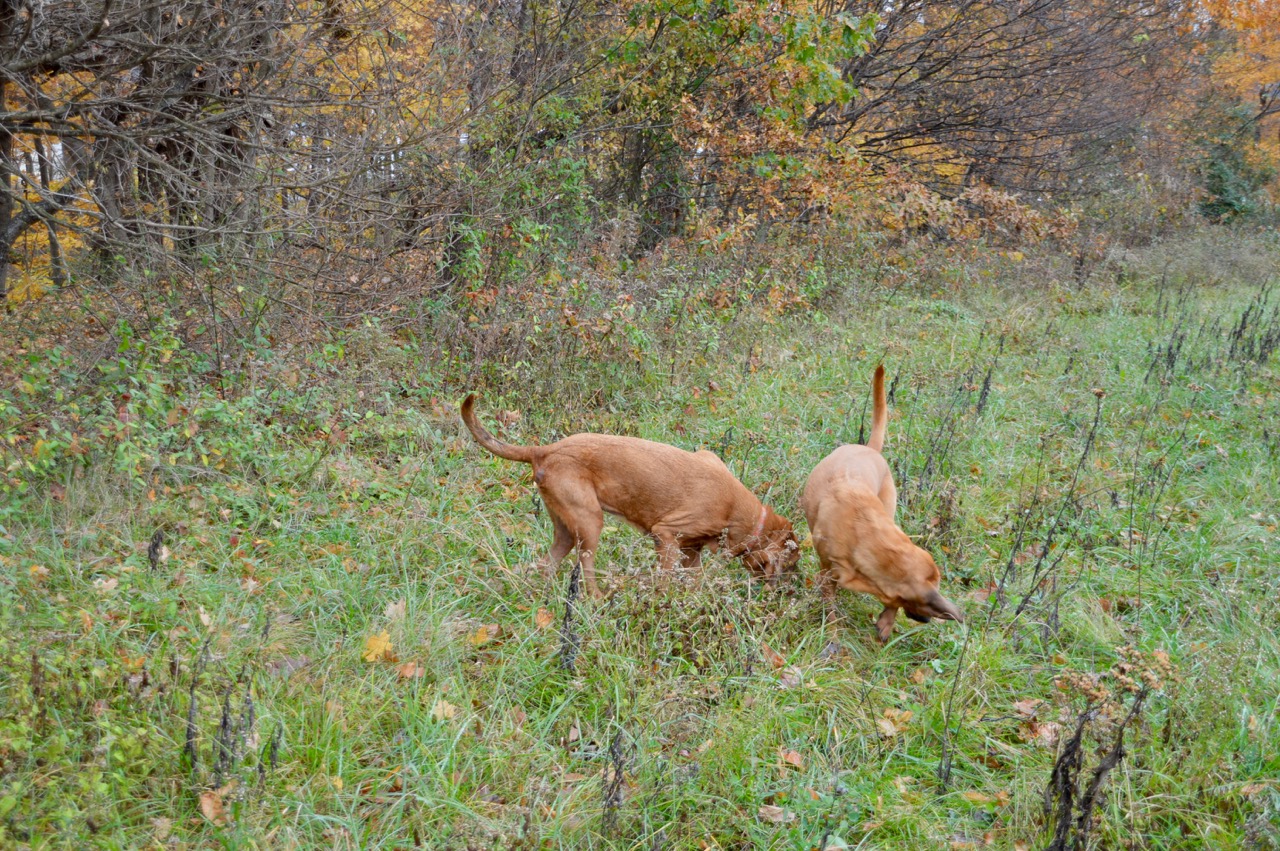 The morning's walk wasn't the main theme of this post as the post title says. Last night while watching college football I decided it was time to put the frozen Marie Callender's Dutch Apple pie in the oven. It seemed like a safe time to do that with three hounds in a deep sleep, all in their nightly positions to sleep while I watch a ballgame or a movie.

I knew they would not stay asleep long. They can smell food a mile away even when they are dreaming of running in the field. They seem to think that all of the food I fix for myself is also their food. They rarely get any 'people food' besides their kibble although they will sit giving me their stares and watching every bite I take.

This is the normal position for Heidi and Stella, every night of the year. Blankets are only used from November to March. I will say that I am not a bad cook. Some say that I am a very good cook but those meals were years ago before I turned myself into a retired recluse. I may cook but I never bake. I have never taken the time to learn how to bake so whenever I want a pie, it's usually a frozen pie made by Marie Callender's. I remember when their chain of restaurants opened in Southern California in the mid 1980's. It was probably good the nearest one was 17 miles away in Del Mar, CA.

I probably should have baked it longer for the brown sugar on top to become darker but the thermometer said it was good at 165° on the inside, I saw some bubbling going on from under all of that unhealthy stuff ... so I pulled it out of the oven. 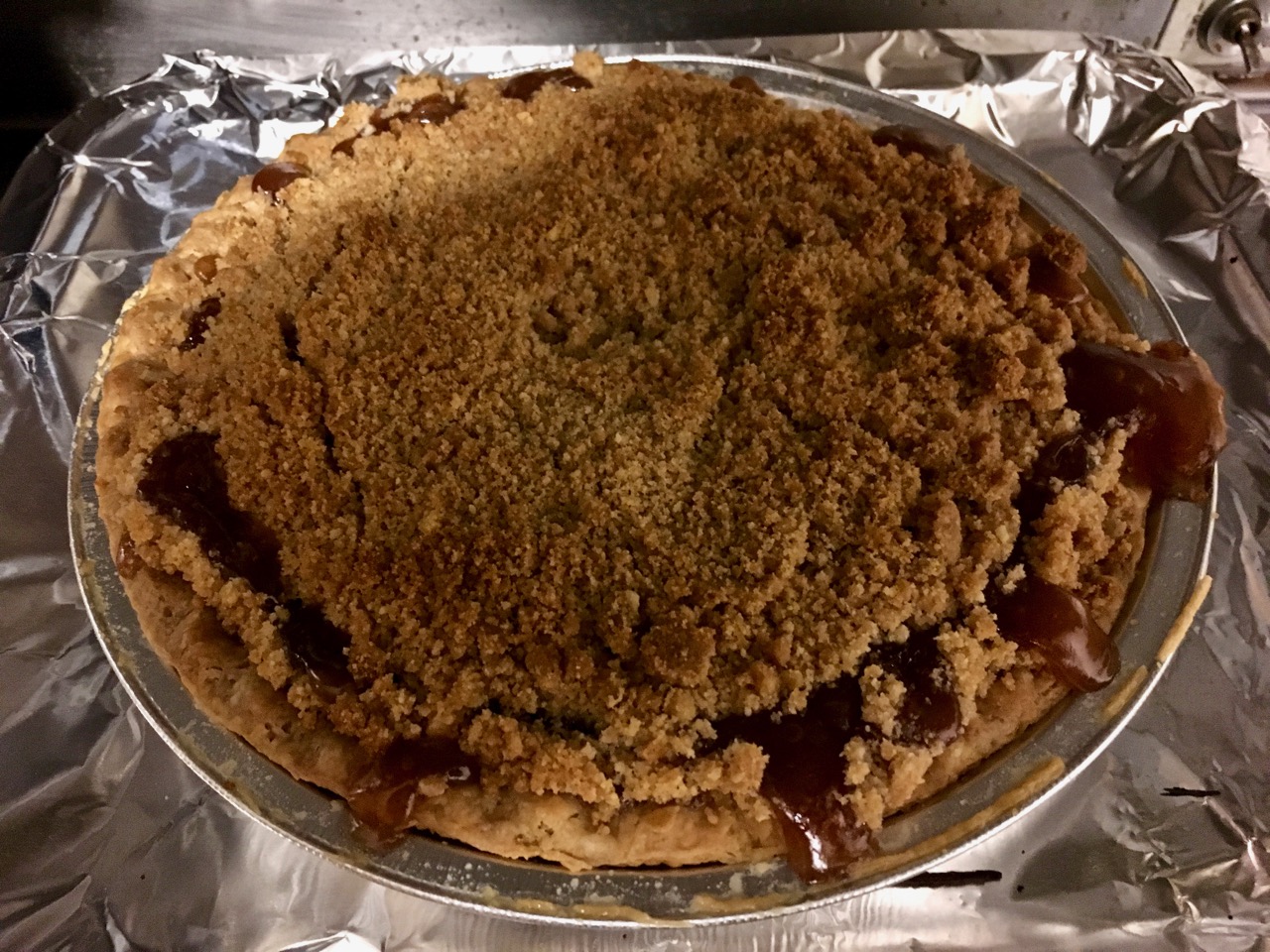 Unlike most of you that might bake, I just can't sit this pie on the kitchen counter to cool like you can. Why? Because I have a bloodhound named Stella that is a professional counter surfer and I have found there isn't any food yet that she does not like if/when she can get away with it before I catch her. So the pie had to be moved to the top of my refrigerator to cool off, the safest place in the house.

There have been times I have put my bowls of fruit up there while I am outside mowing the lawn or working in the yard during the non-winter months. 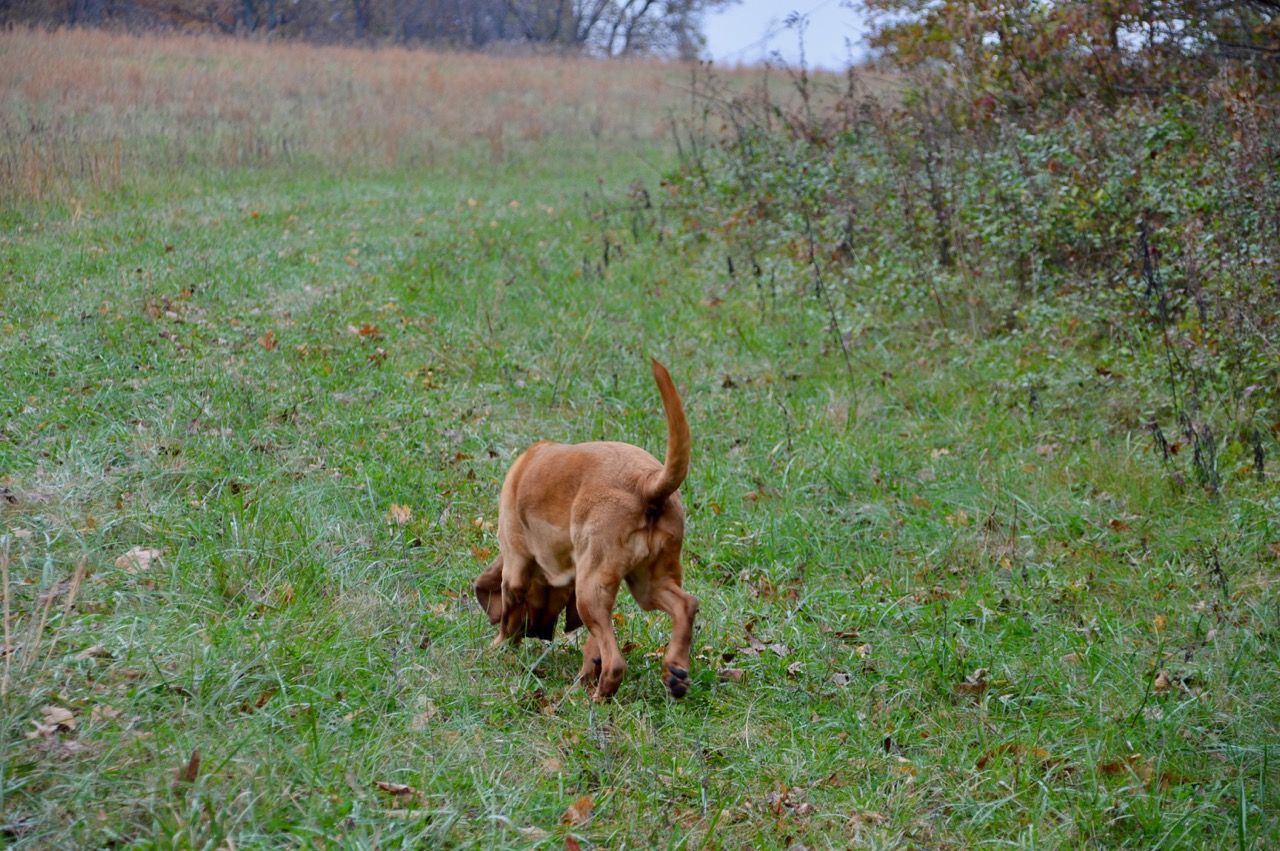 Of course the hounds were awake and very very interested way before I pulled the pie out of the oven. The first time I smelled apple pie baking while I sat on the couch watching football, Stella was missing, so was Sadie. Heidi remained sitting next to me but she was awake and her active nose was pointing to the air with her nostrils moving.

Stella decided the only thing to do was to stand watch over the baking pie so she sat in front of the oven. Sadie played hallway monitor, sitting in a position where she could glance over at me to let me know that Stella could be in trouble. By using the small oven built into the cabinets over the stove, there was no chance of Stella burning herself by checking out the bigger oven's door that was in front of her. When she checks out things, or tells me she wants something ... she always presses her nose against what she is wondering about. 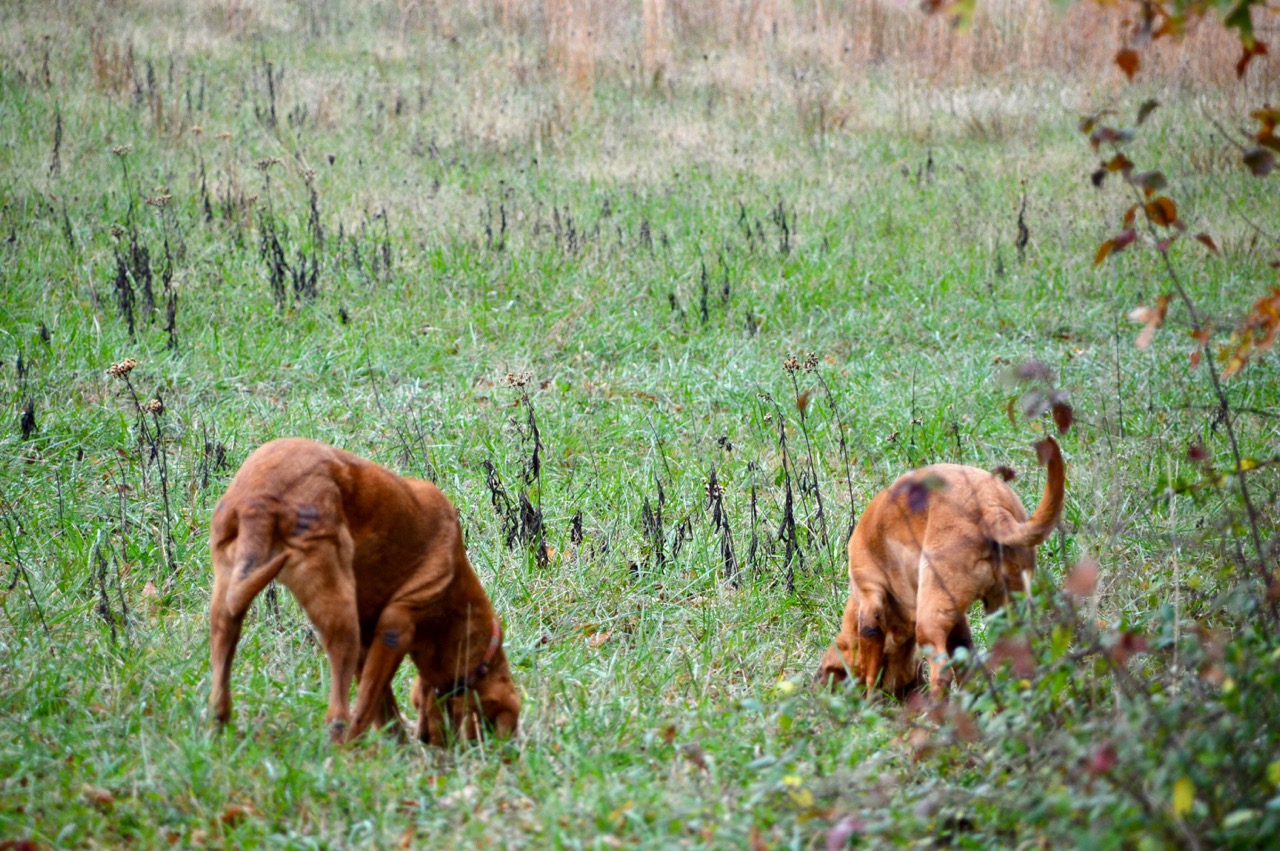 I saw her do that the first 5 minutes that I had her in the FJ, bring her home from Kentucky. She pressed her nose against every window to see if they would open. She will do that to every door knobto see if it's a lever instead of being round, so she can open the door on her own. She does not do that with food though .. she knows what any kind of food is and will not hesitate to grab it if she can. 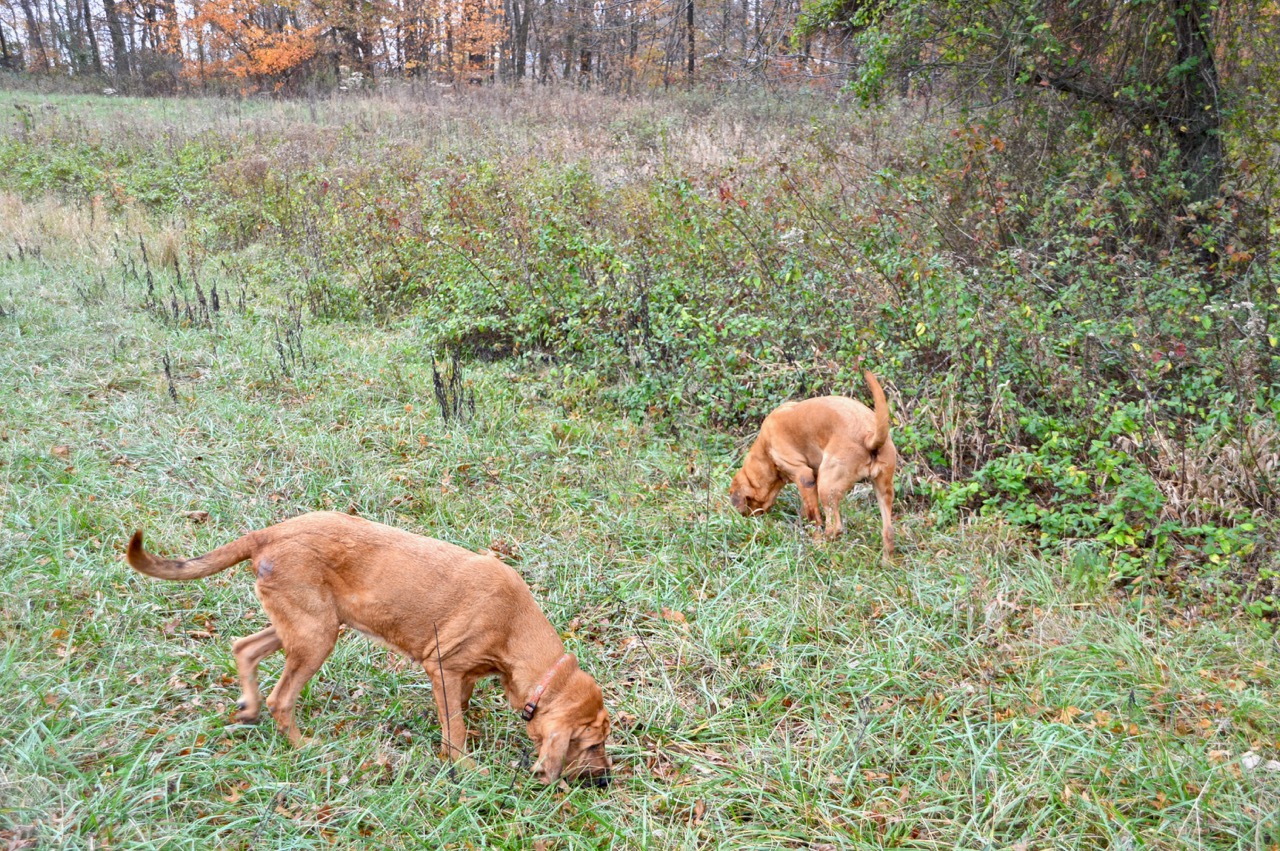 So 50 minutes later I pulled the pie out of the oven to apply the bag of unhealthy brown sugar that came with it. I felt that familiar bloodhound nose pressing against my right leg and looked down at Stella. She was convinced the pie was finished and she would be getting that first piece. That was not going to be a possibility for any of the three hounds. They are spoiled, I admit that, but there are also limits they have to live by. 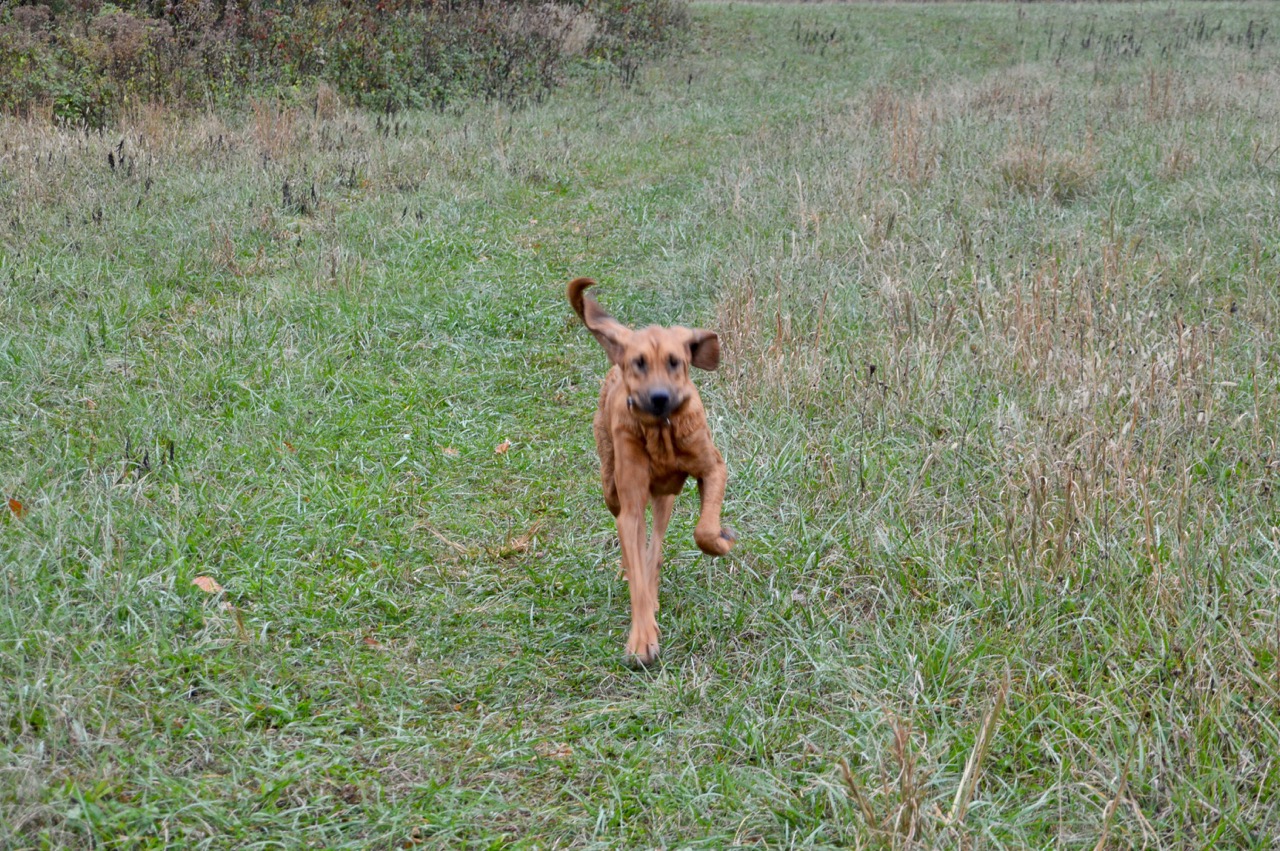 It was too late for pie by the time it cooled off a little,  for most people. But most of the people I know are not watching college football 15+ hours per day either ... so a piece of warm dutch apple pie sounded like the perfect desert around 11:15pm.

Once again I had to fight off the herd of hounds who by now were all sitting on the floor as close as possible to me ... except Sadie ... who always lays down under the coffee table so she will be the closest to any kind of food dropped on the floor. I can't remember the last time or if it has ever happened in the 9 years I've owned her but she never gives up and thinks it's possible. It is a good position to be in though when I am handing out the plain pizza crust. 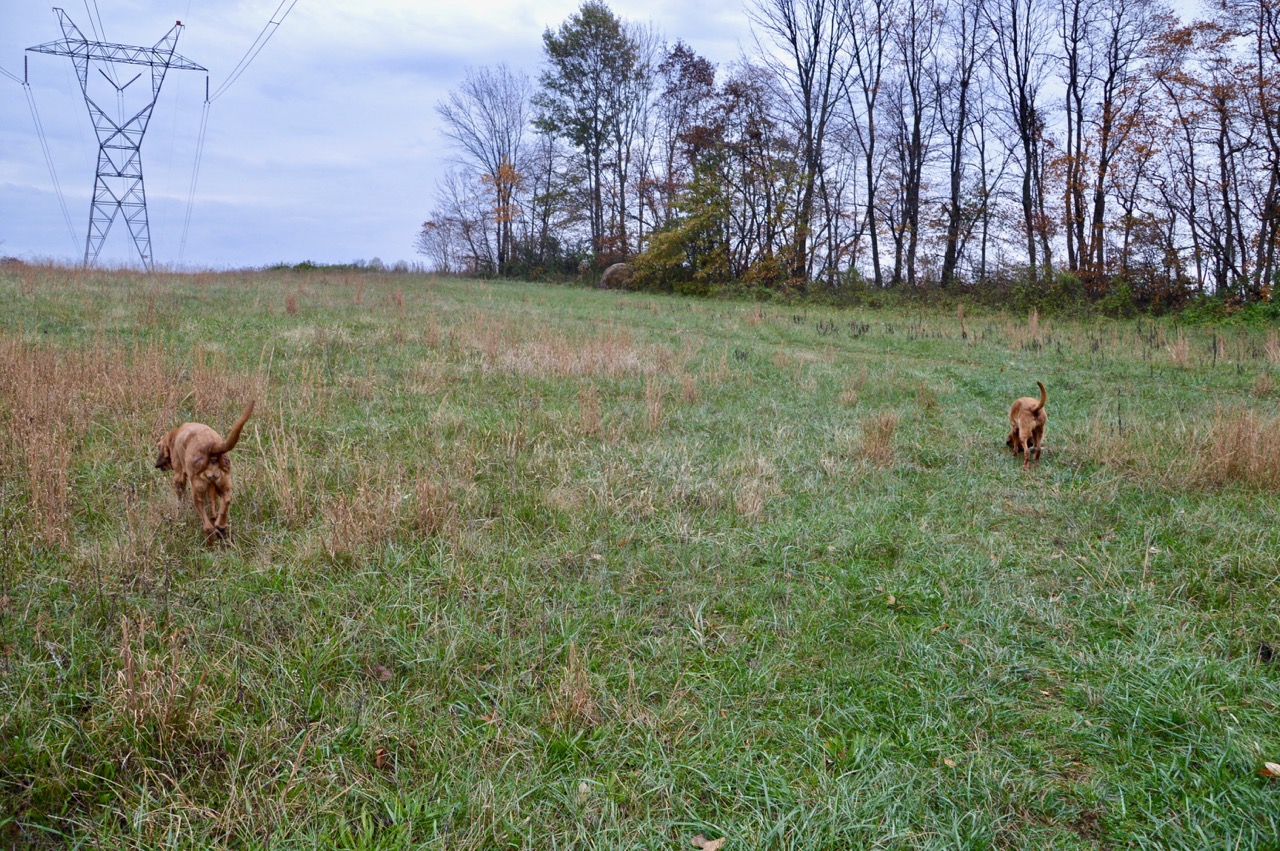 I could tell from the first bite the hounds would be shutout in their request for pie. Not even a piece of crust would be given to them, it was that good. You have to remember if one hound gets something to eat, they all do. There is no other way to handle that. They don't agree to that theory though when it comes to trimming their toenails. 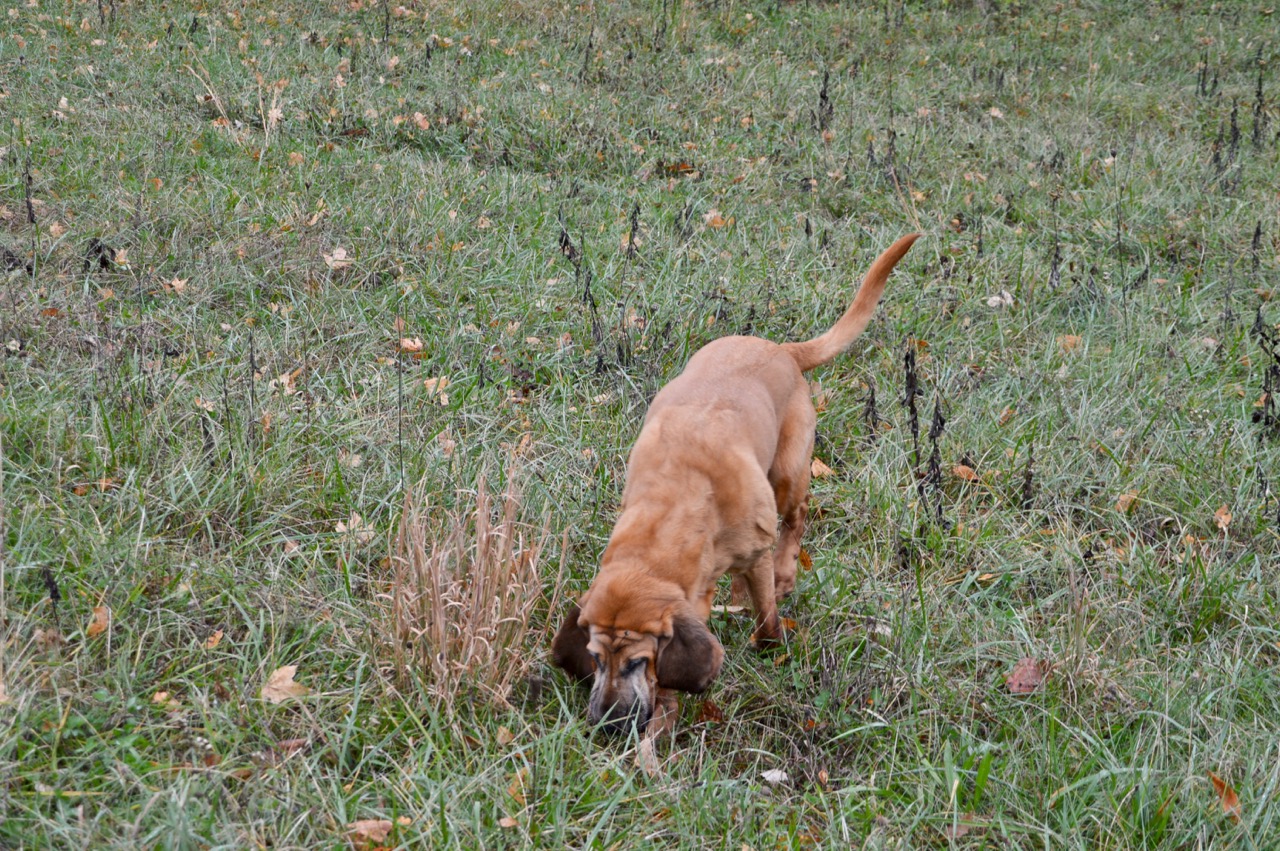 By this morning the thought of apple pie to them was a distant memory. They were more than happy to chow down on their kibble. Sadie will clean all three bowls after Stella and Heidi have finished. I cannot see how any of these hounds could be on a 'free feeding' idea that some dog owners swear by. 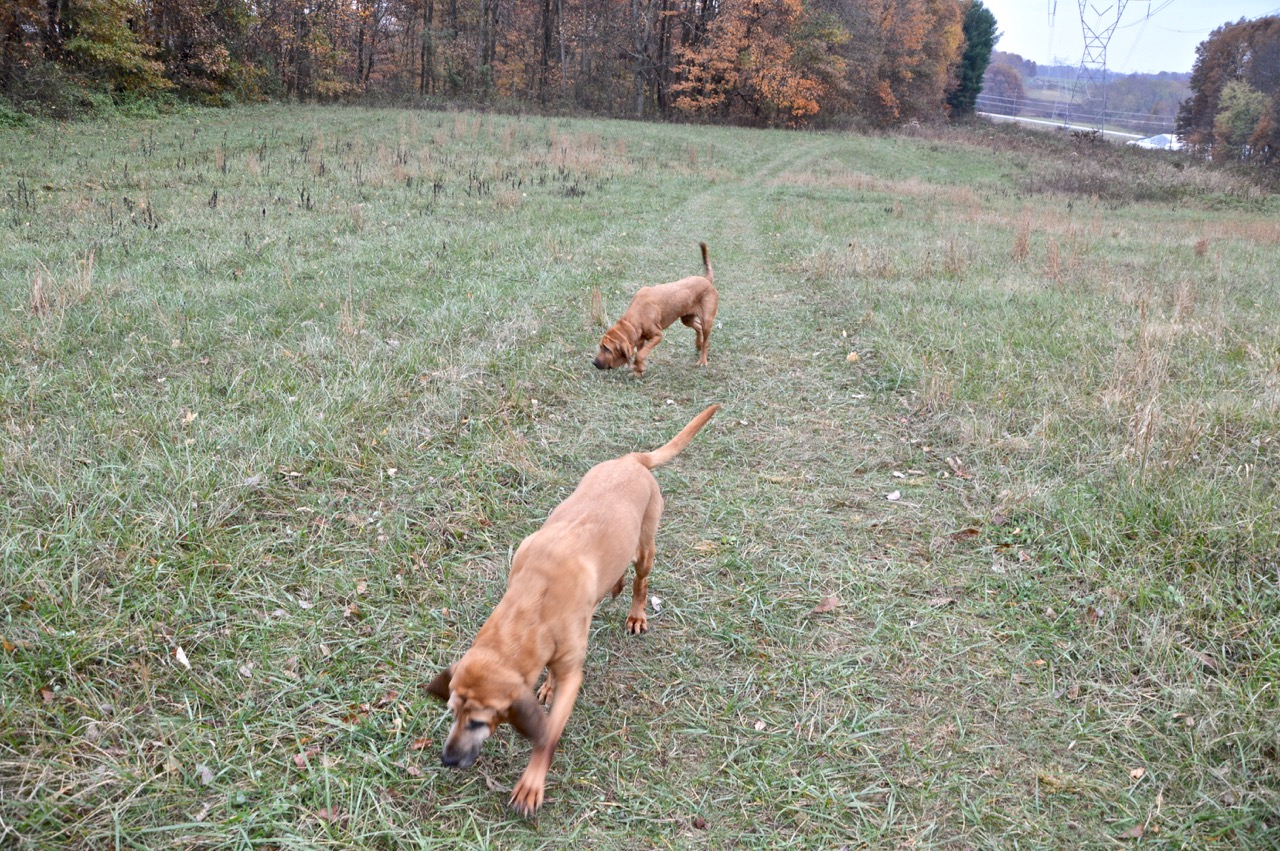 I did something last night that I cannot remember ever doing on a Saturday night during football season. I was actually in bed and asleep within minutes before midnight. College football games were still going on. A new Pac12 game had started so what was the problem? I am normally watching that last Pac12 game until they finish around 2am or so my time.

With Miami making my night by blowing away Notre Dame 34-8 to start the 4th quarter, I was thrilled enough with those results to officially declare I had watched enough. I had no interest in watching the Arizona - Oregon State game that had just started. My Washington Huskies had played the night before ... but the biggest reason ... I was tired. I was still trying to recover from the time a few mornings ago when I woke up at 4am and got up a little after 5am and stayed up. 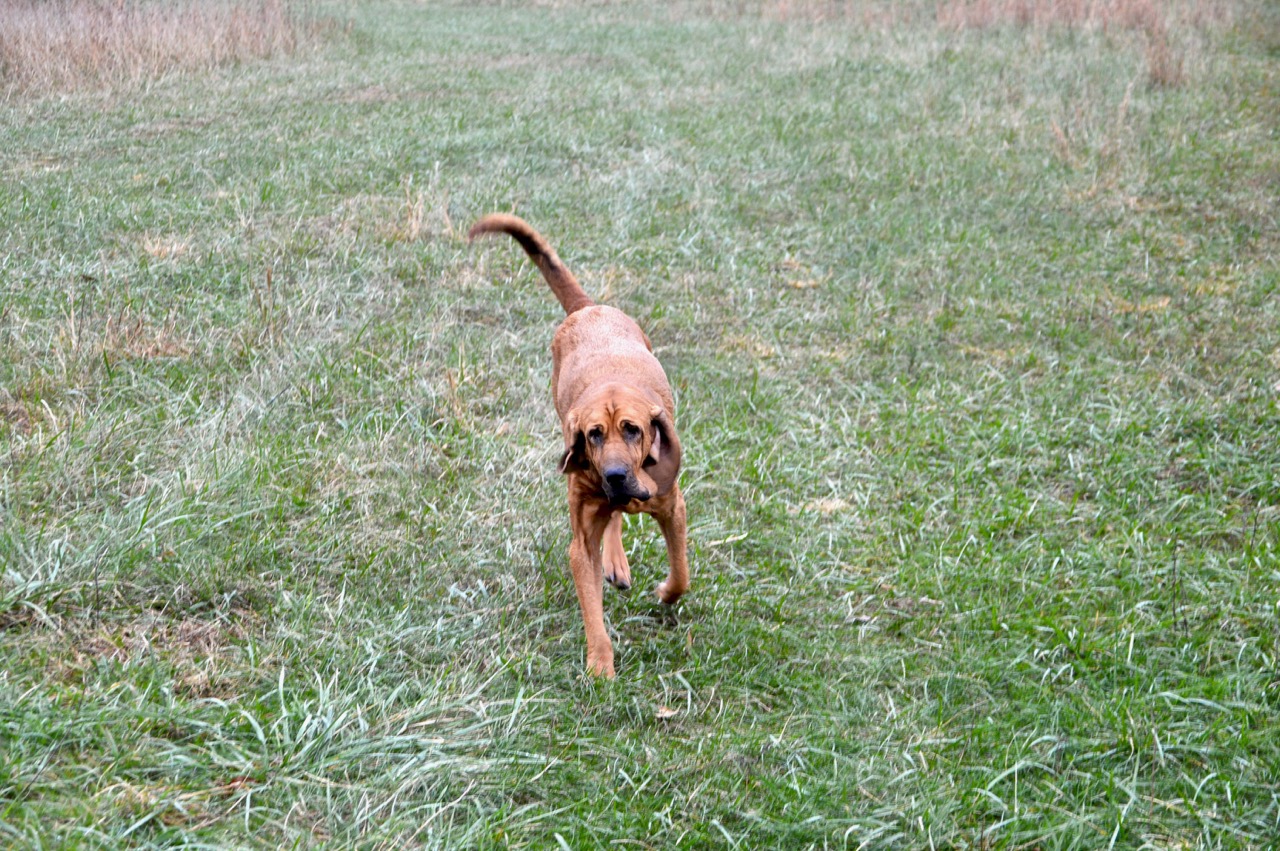 Maybe it was the pie. These past few years I no longer have the eating marathons I use to participate in while watching college football so it wasn't my meals on Saturday. It's the first time in a long time I had over 8 hours of solid sleep.

So with some rest, light rain ... it was a perfect time to get our walk in this morning. The hounds were feeling so good that Stella even attacked Sadie to see if she was up for any wrestling. That didn't last long since the rain drops were falling a little harder and more frequently. 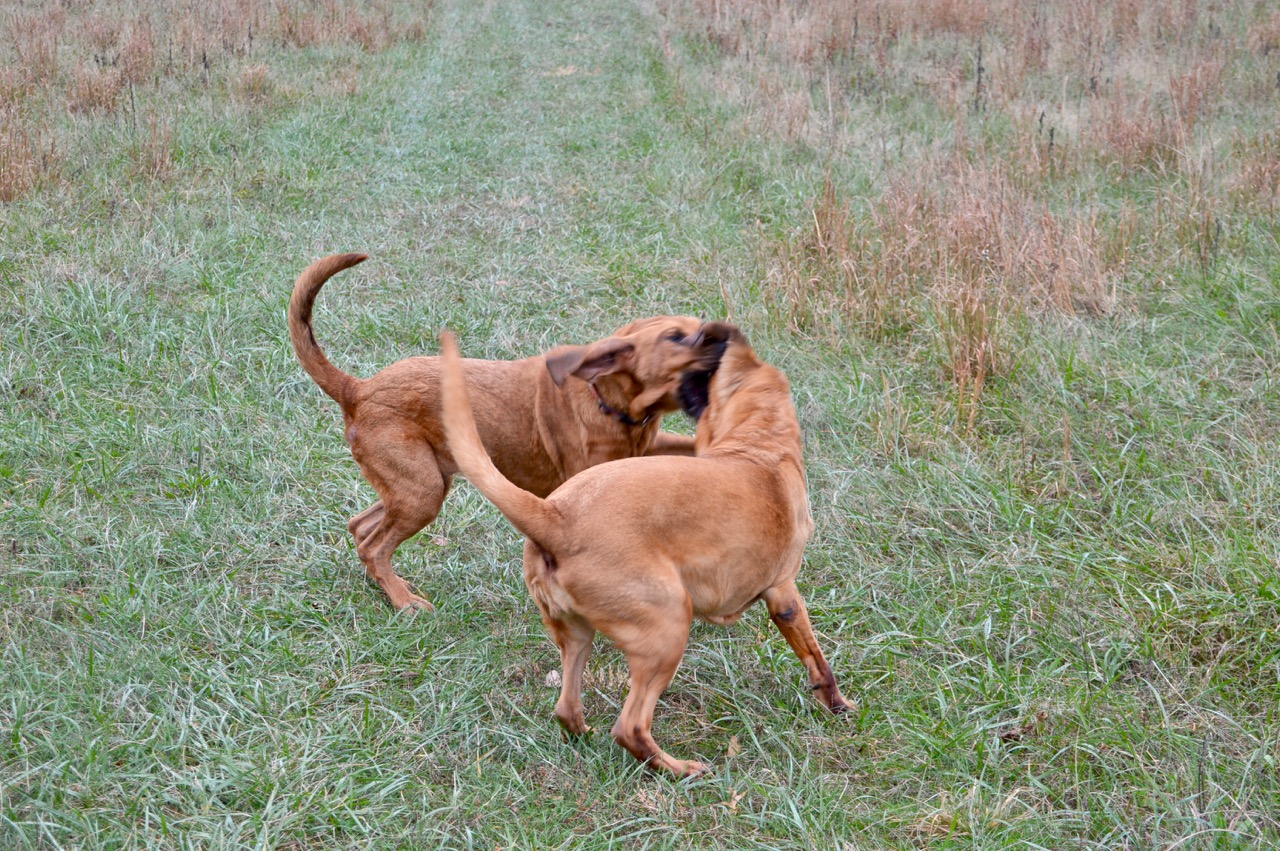 As fast as they started to play, they stopped and ran toward the house. 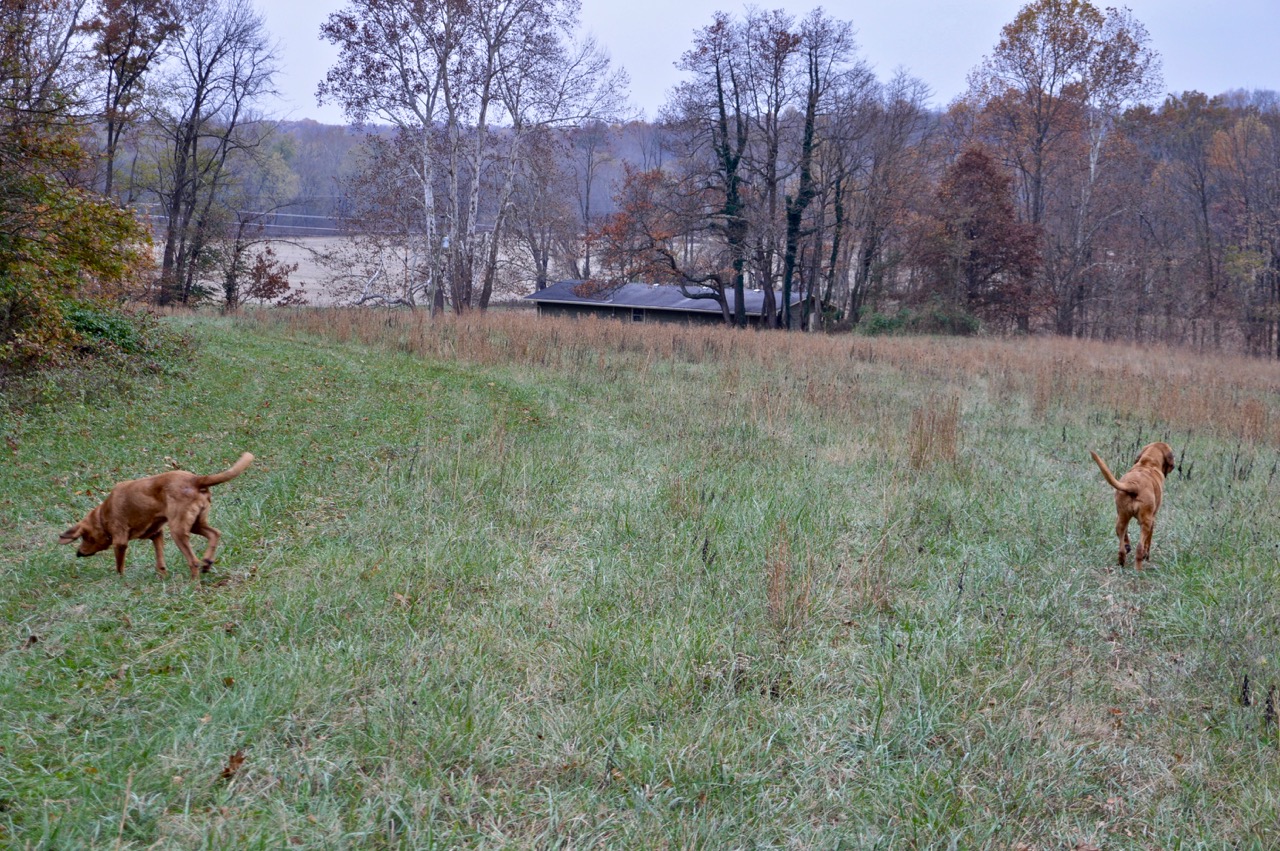 Rain nor snow will stop them from exploring the field all the way up to the yard ... no matter how many times I am telling them to "come on". 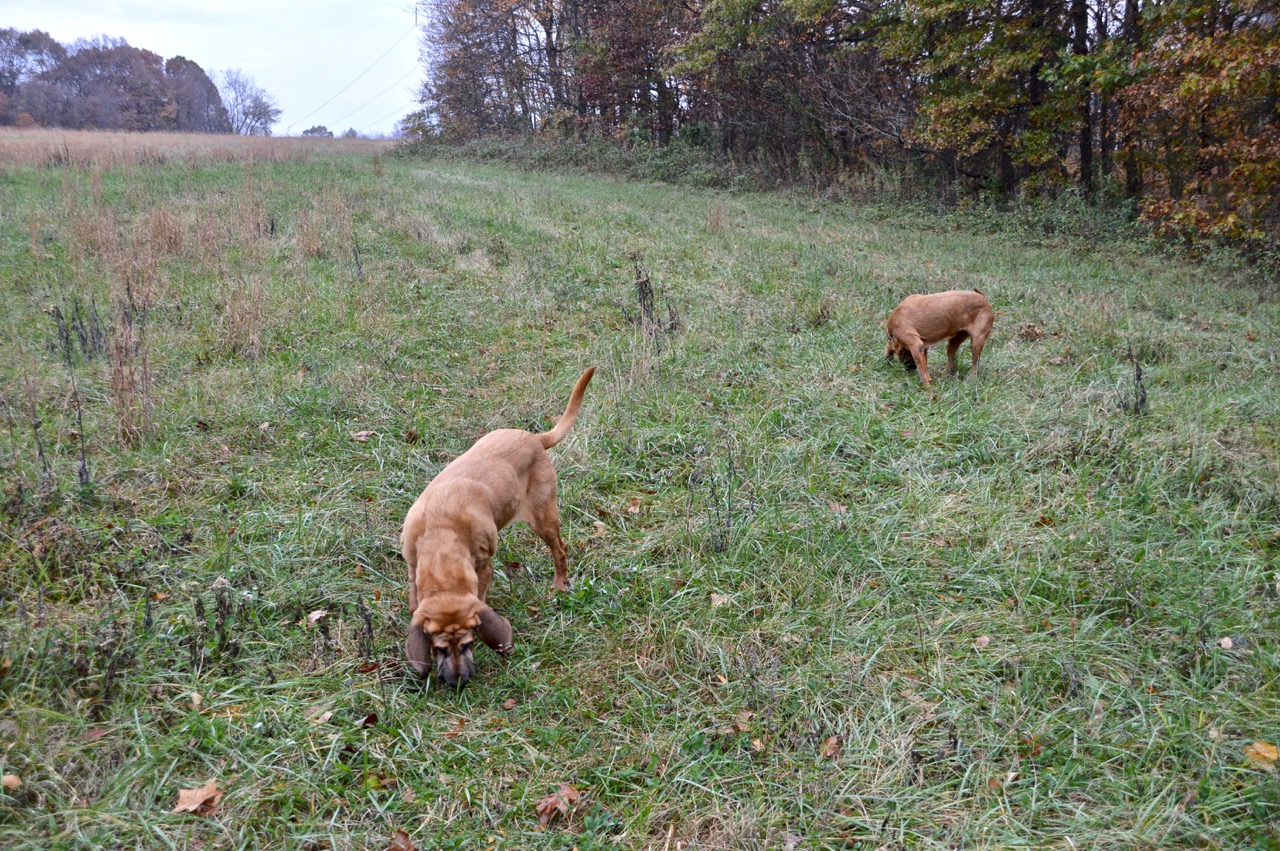 They finally figured out that I wasn't lying, that it really was raining. Not hard but more than it was when we started. Maybe it really was time to get back inside. 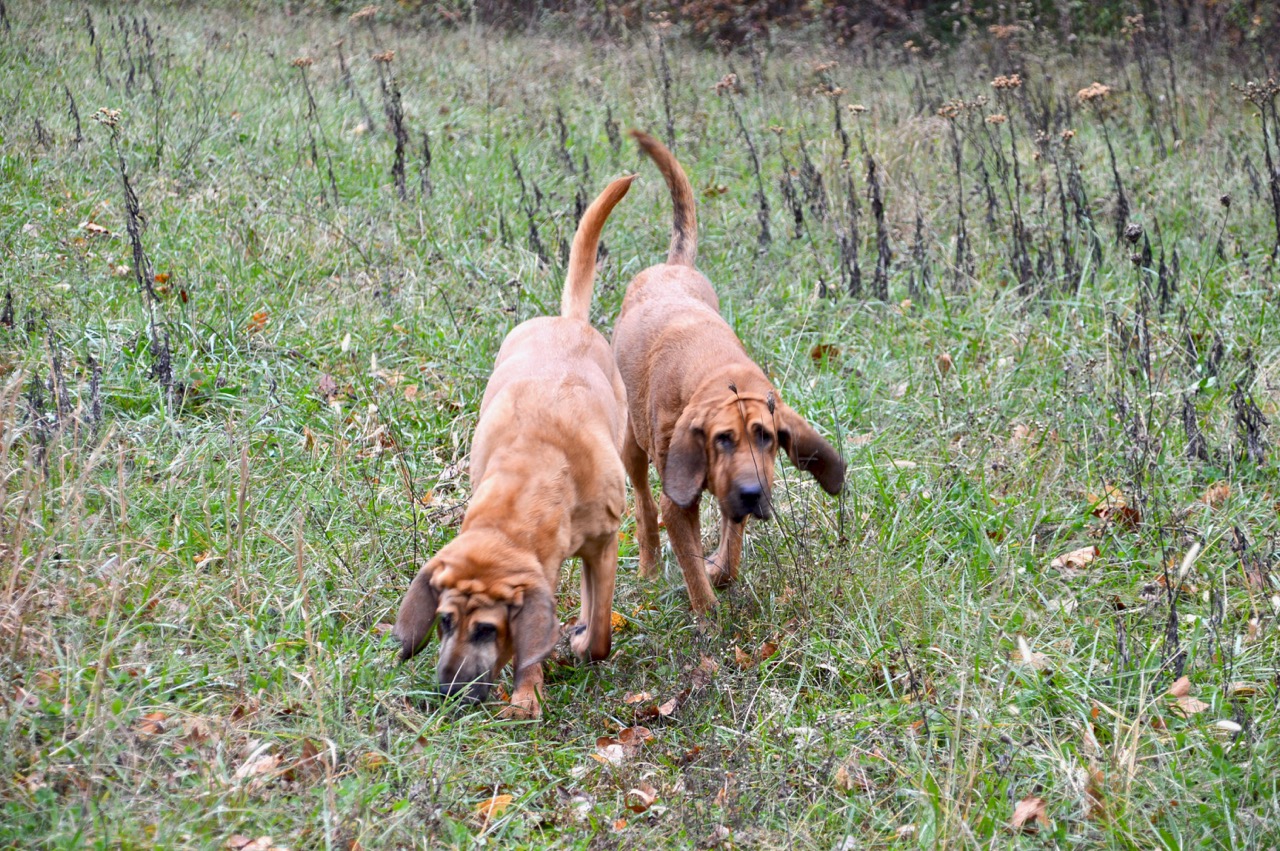 I wonder what it feels like to have that much skin fall over your forehead when you are deep in thought? 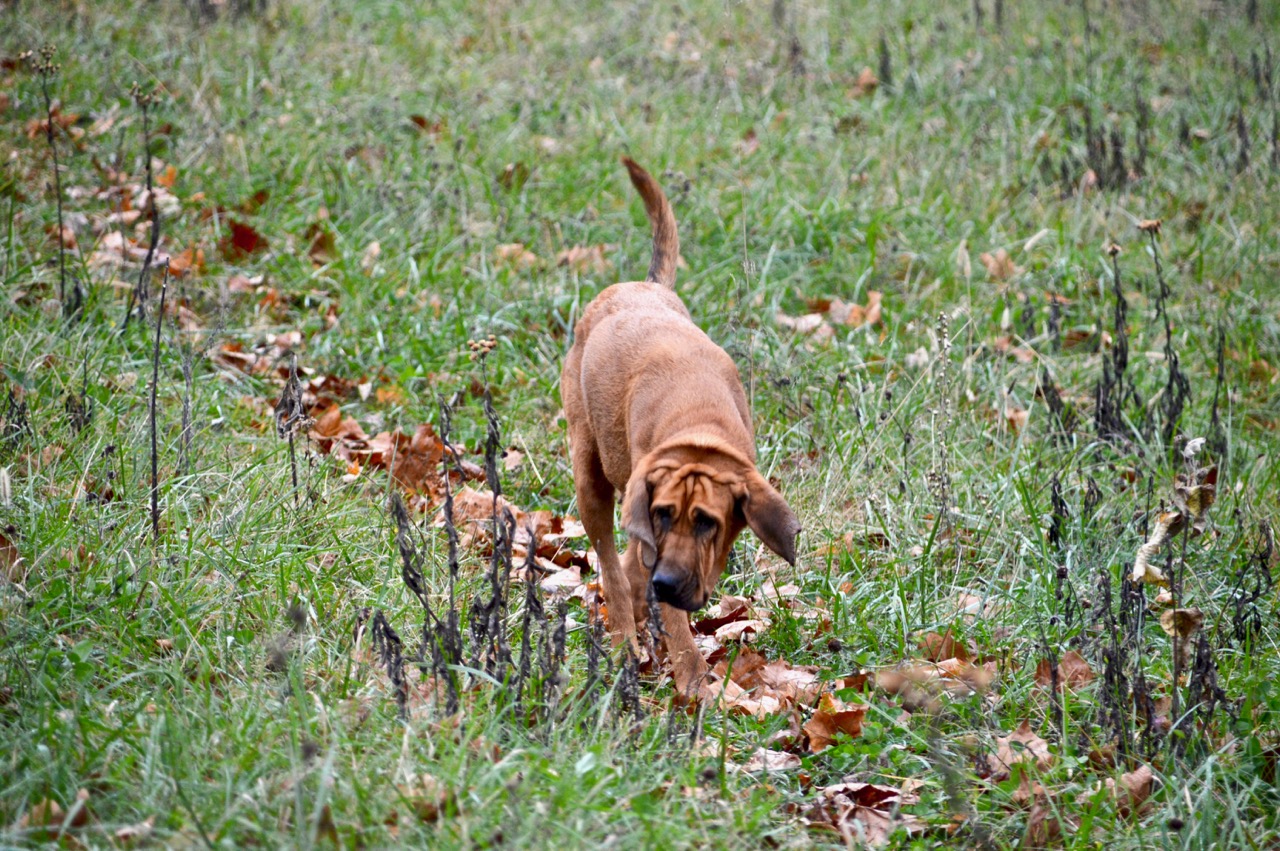 If you have read this far ... you'll enjoy this gem.

Don't ask why because I don't know why. While walking this morning I was thinking of starting a new blog on Wordpress like I had before. I'd still keep this blog as my main blog. The Wordpress blog would be like I had before where it included only one paragraph of content and 8-10 photos. The photos were never different than the ones you see here.

Why would I want to do that?

Is it like it's bad weather outside and in the past I always have an urge to build a new blog(s) or change templates, fonts and colors on the blog I have? I'll not change anything on this blog but I just can't figure out what makes me want to start something that I deleted in September and have deleted the same blog even before then.

Any psychiatrists out there? Leave you answers in the comment section.  LOL

Cool and rainy in 'the tropics' of Southern Indiana today.
By Steve at 10:04 AM