It's Wet But It's A Friday 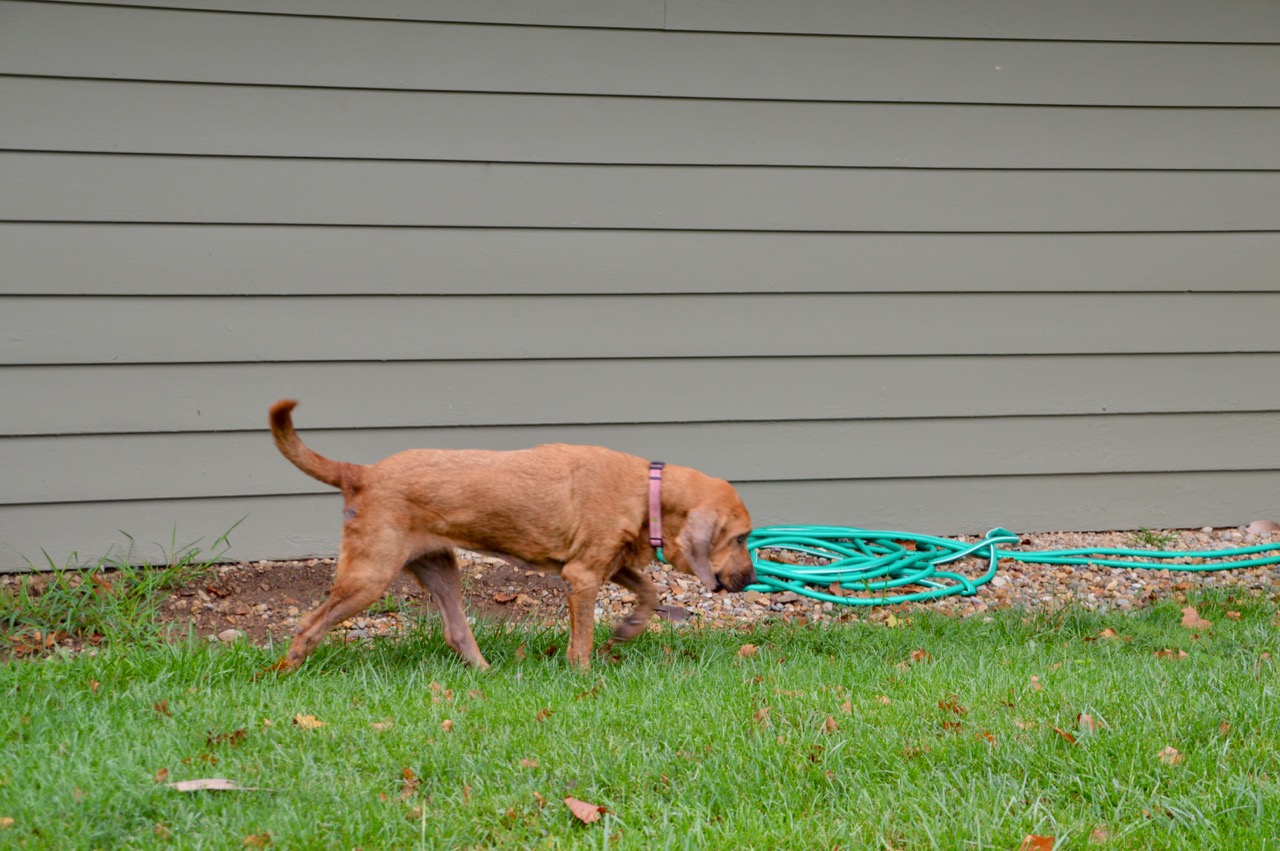 We woke up to the sound of rain but all three hounds headed for the door to be let outside before my feet even touched the floor. It was barely daybreak but obviously they were ready to start their day and that always means breakfast. I knew Stella would not leave the protection of carport, Heidi would sneak out under the roof overhang and Sadie would sprint to the field, rain or no rain. As I poured kibble, Stella stood at the door looking inside and waiting for me to finish. 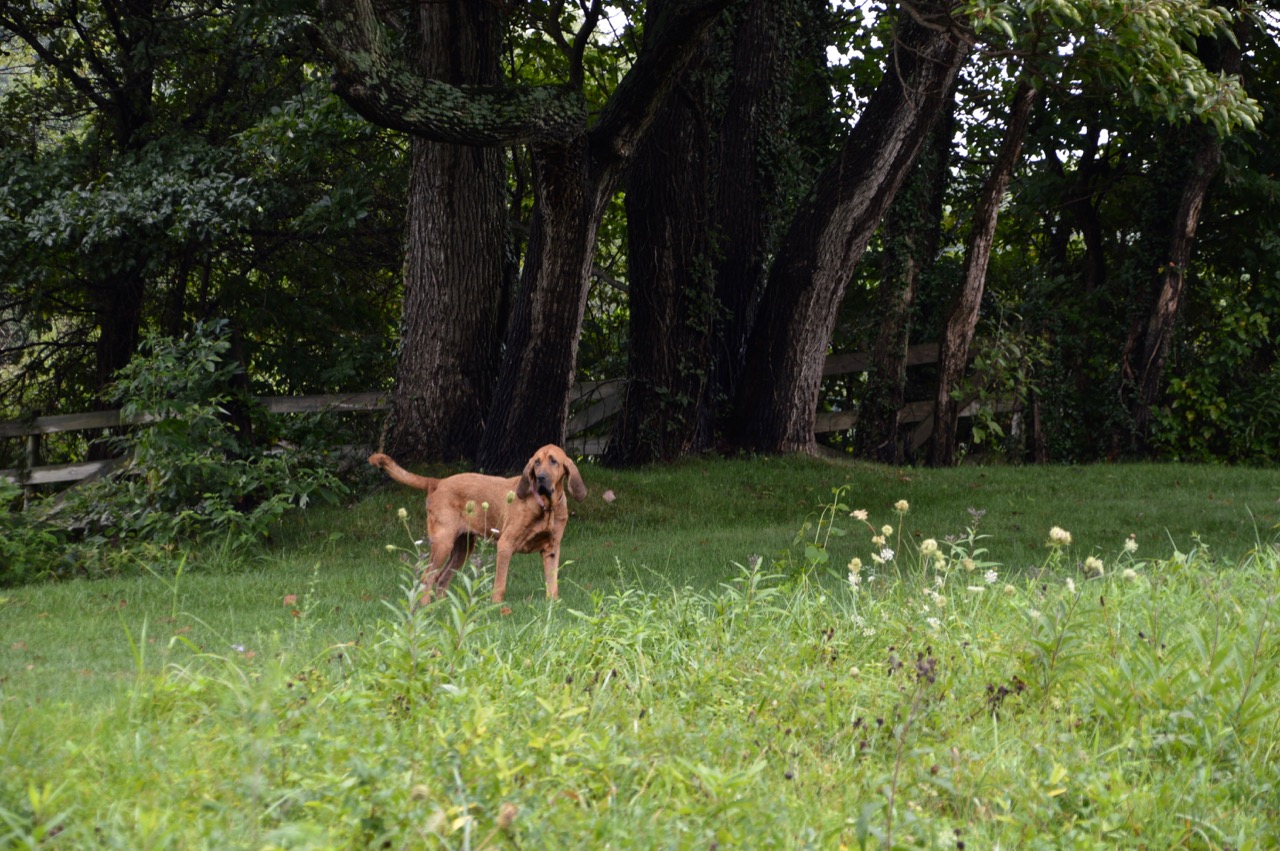 The past few days the hounds have determined for some reason, that it's time to start getting up before 7am and start the day. By the time I finish making my coffee, they have all finished their meal and have headed back to sleep in different spots scattered throughout the house. They are awake for no longer than 10 minutes, 15 at the most.

Within the next hour the rain had stopped, the temps were even cooler than before and Sadie thought it was time for her walk. I agreed and before I could step 5' into the field, Stella was already trying to sneak away toward the neighbor's yard a vacant lot away. She could not believe I caught and stopped when I called her name. 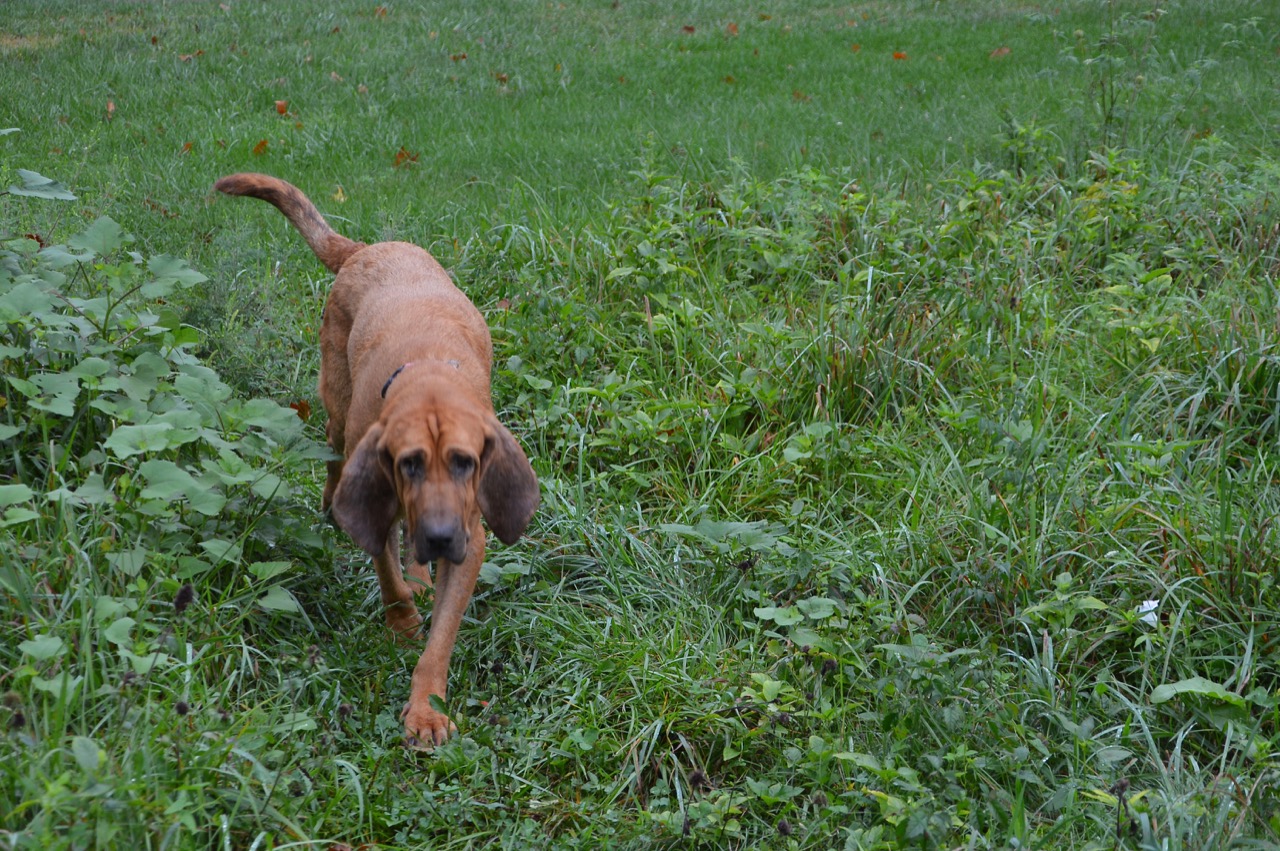 After telling her to either join Sadie and I for the walk or go back inside, she decide a walk would be nicer so she headed toward our path to join us. She walked into my leg as she moved around me on the path and kept walking. She will not walk around me or Sadie when she is heading somewhere. Even in the house she will walk right on your foot if you are in her way. 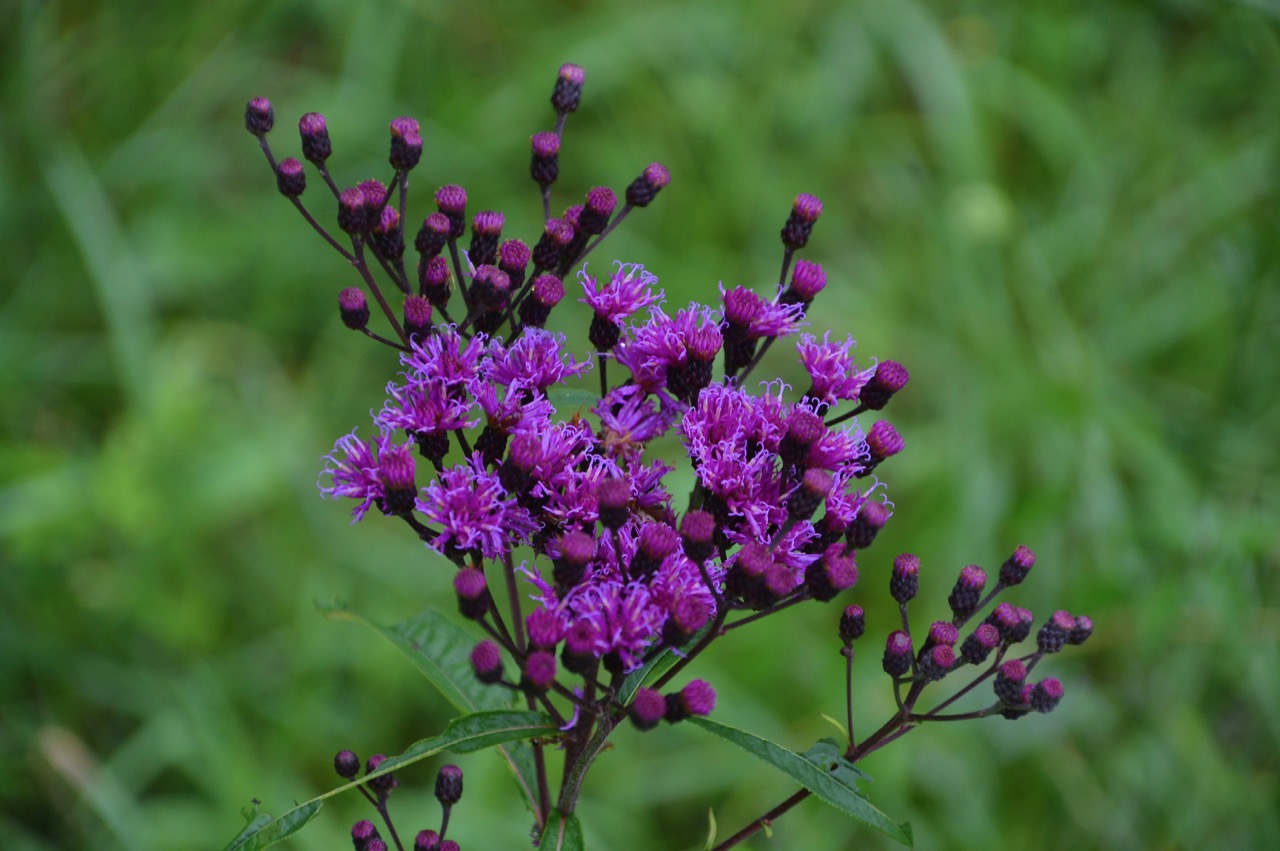 As the yellow daisy and orange wild weed flowers die off, these are taking over the field but mostly just behind the house. It's very interesting to see they are just in that area, for reasons I will not write about. Still the location of these purple flowers make me wonder. 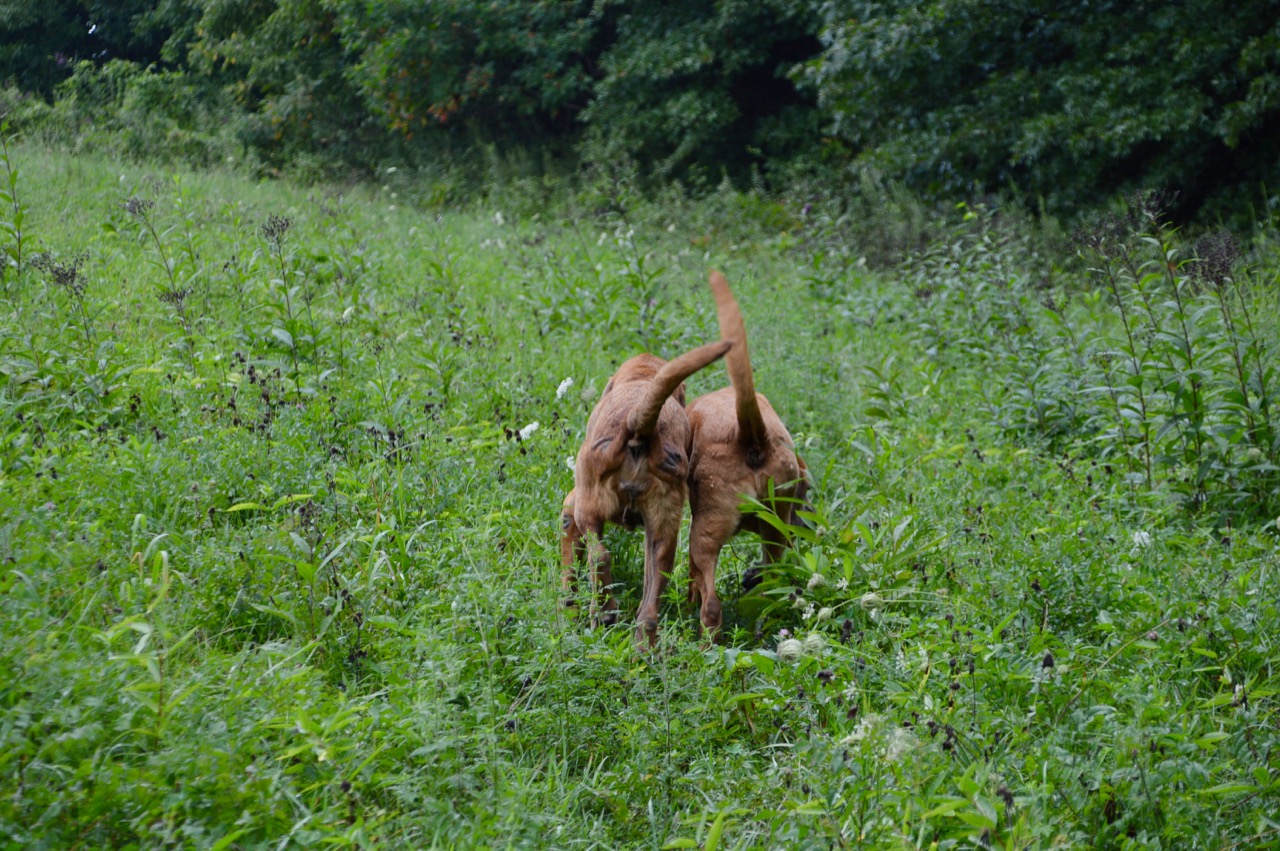 I did not prefer to take a photo of the butts of bloodhounds but wanted to show they were both wanting on the path. Stella wanted to keep her paws dry as possible and Sadie had claimed the path as hers. It took a while but Sadie finally veered off on her own path she follows along the edge of the field. 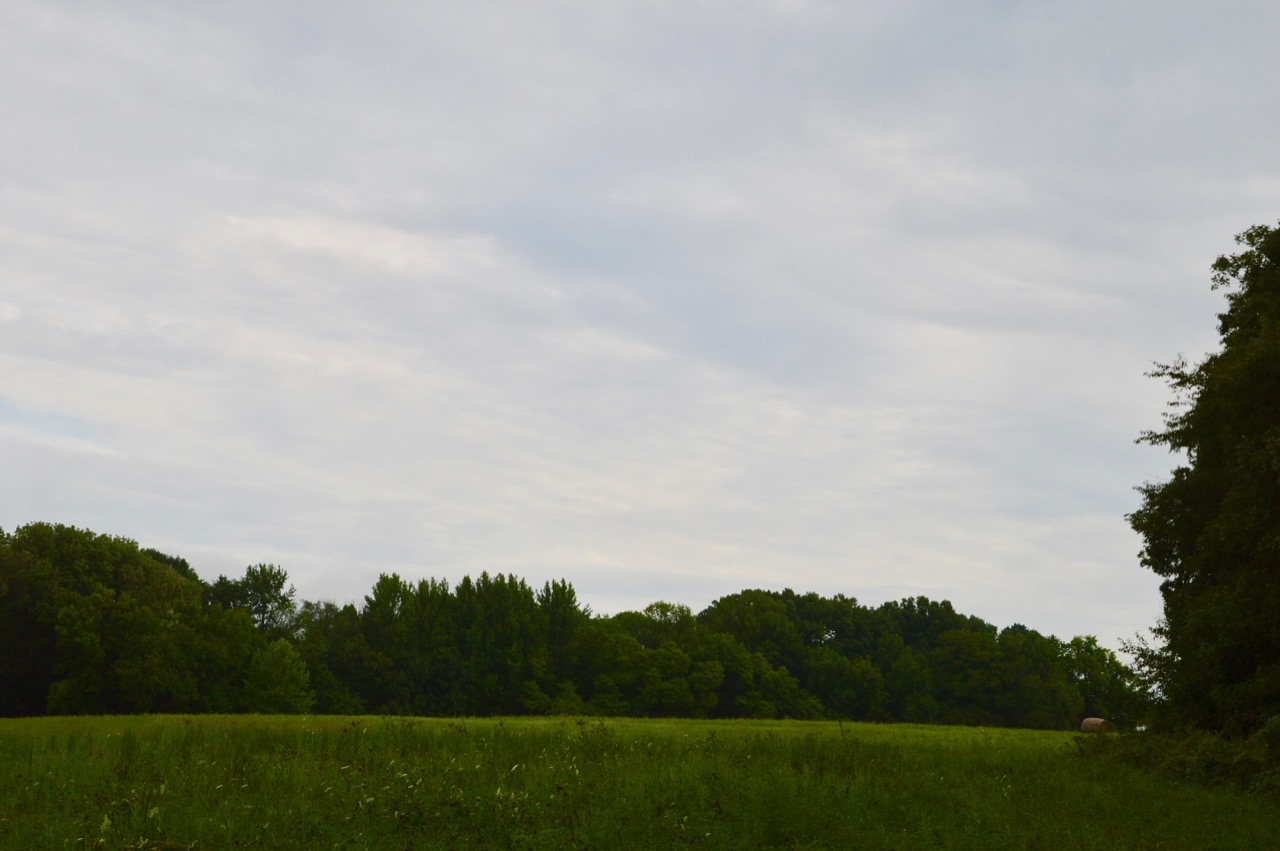 It is one of those days where the rain will be off and on. We might catch some of the storms that are in the forecast but we always seem to miss some as they move south of us. These wet conditions have put some projects on hold while giving me the chance to start my new drainage system along the back of the house.

It will not be right next to the house but about 3' out, or at the edge of the grass and river rock. The system I have now I put in 20 years ago and I have noticed that water is starting to puddle too close to the house instead of draining. With this rain it will be the perfect time to dig my 12" ditch and pull out the old drain and install a new on with a gravel base. 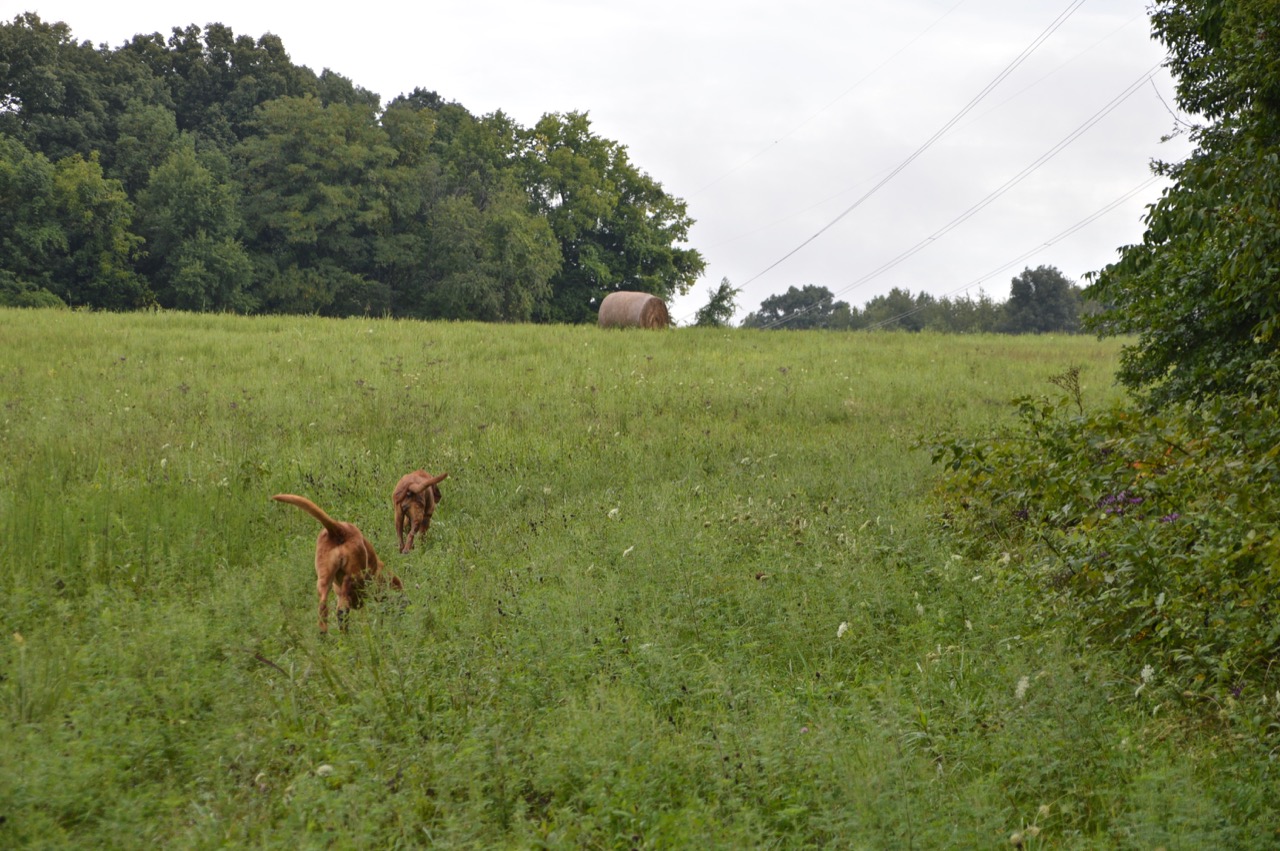 The hounds kept their lead on me this morning. They did their normal route, stopped at their normal spots in the field and I didn't have to say a word to either of them to get them to follow me home. On the way back they stayed on the path and walked right behind me most of the way, out of the range of the camera. 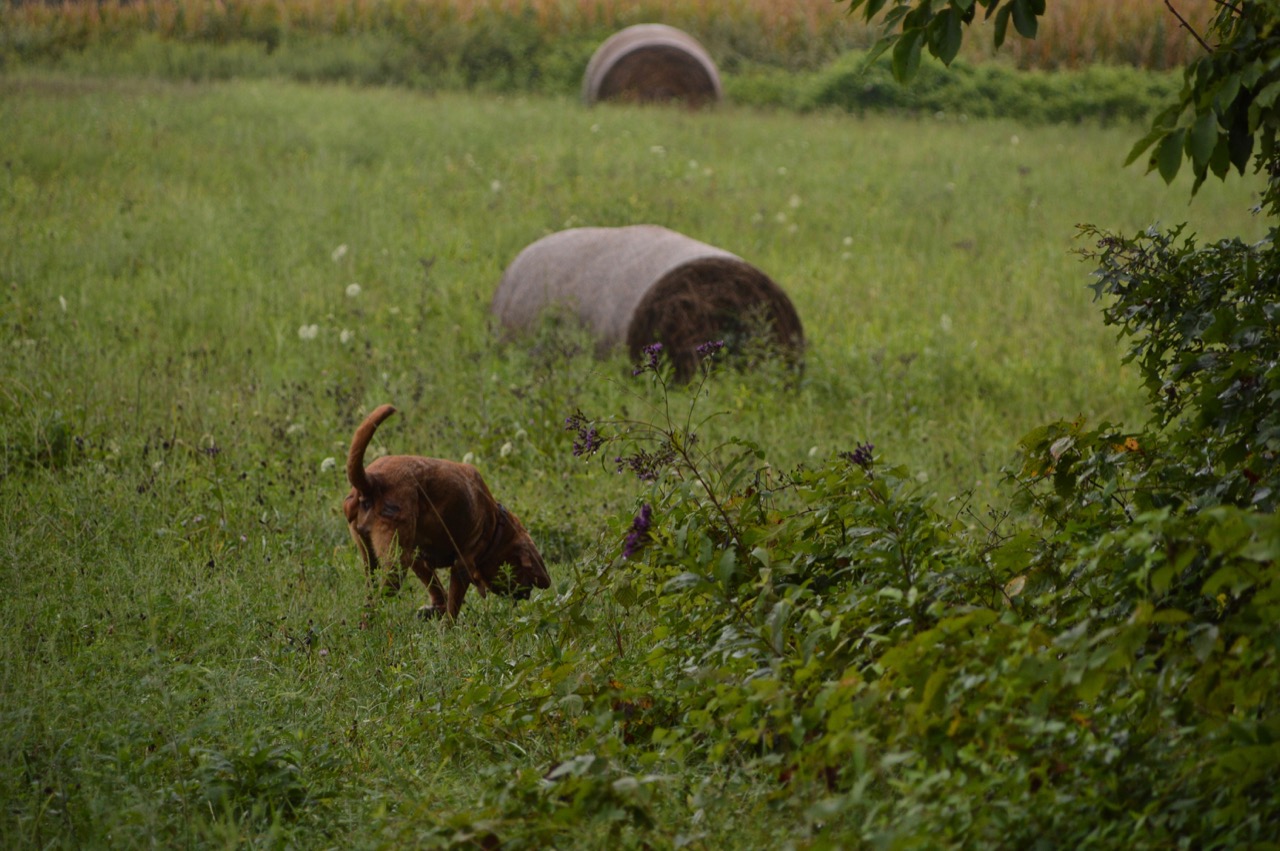 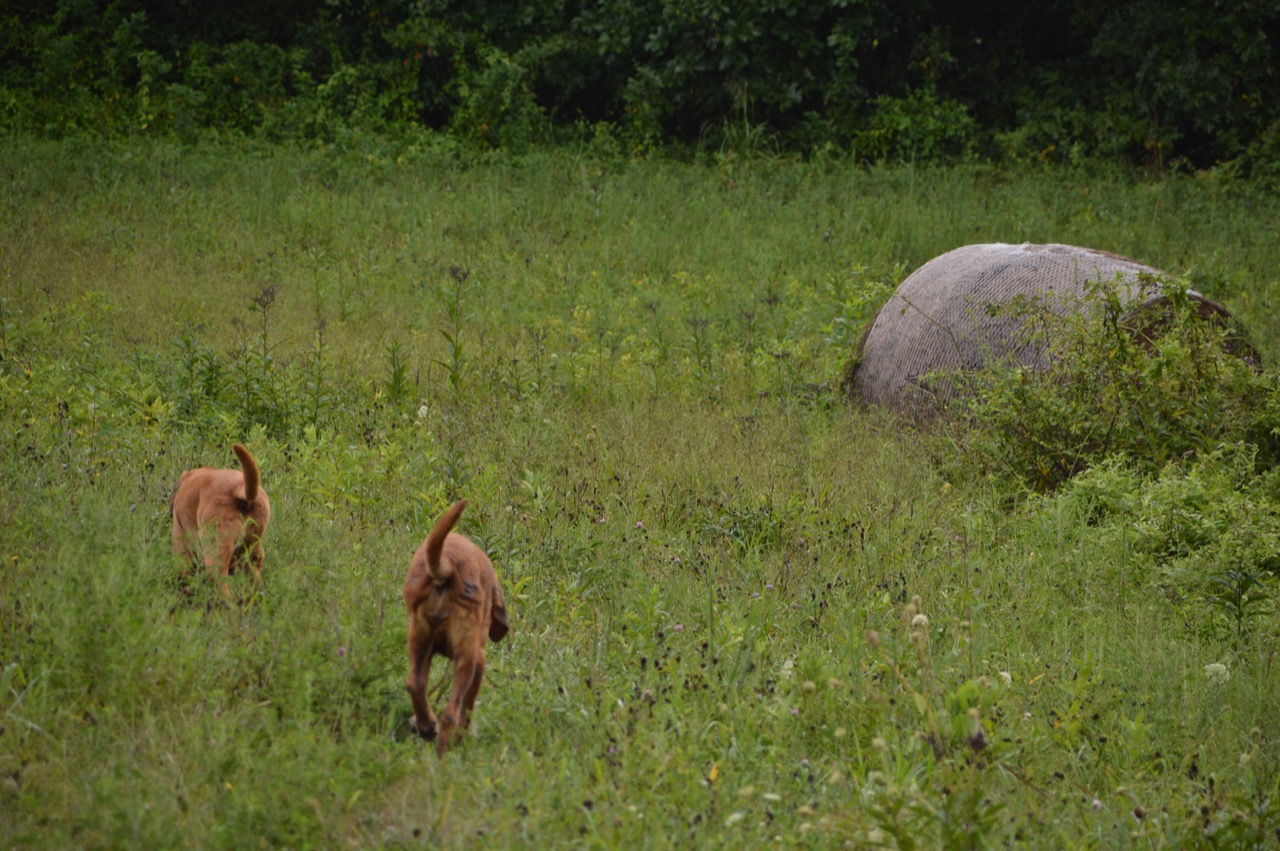 As I see the weeds growing around these rolls of hay, it looks like they may not come back to pick them up. I was told last summer by the son that cuts the field, they didn't need the hay but they cut the field as a favor to the neighbor who owns it because he gives them some of his land to farm on. Evidently they have gotten out of the cattle or horse business because a few years ago that same son told me they used all 32 rolls of hay during the winter. 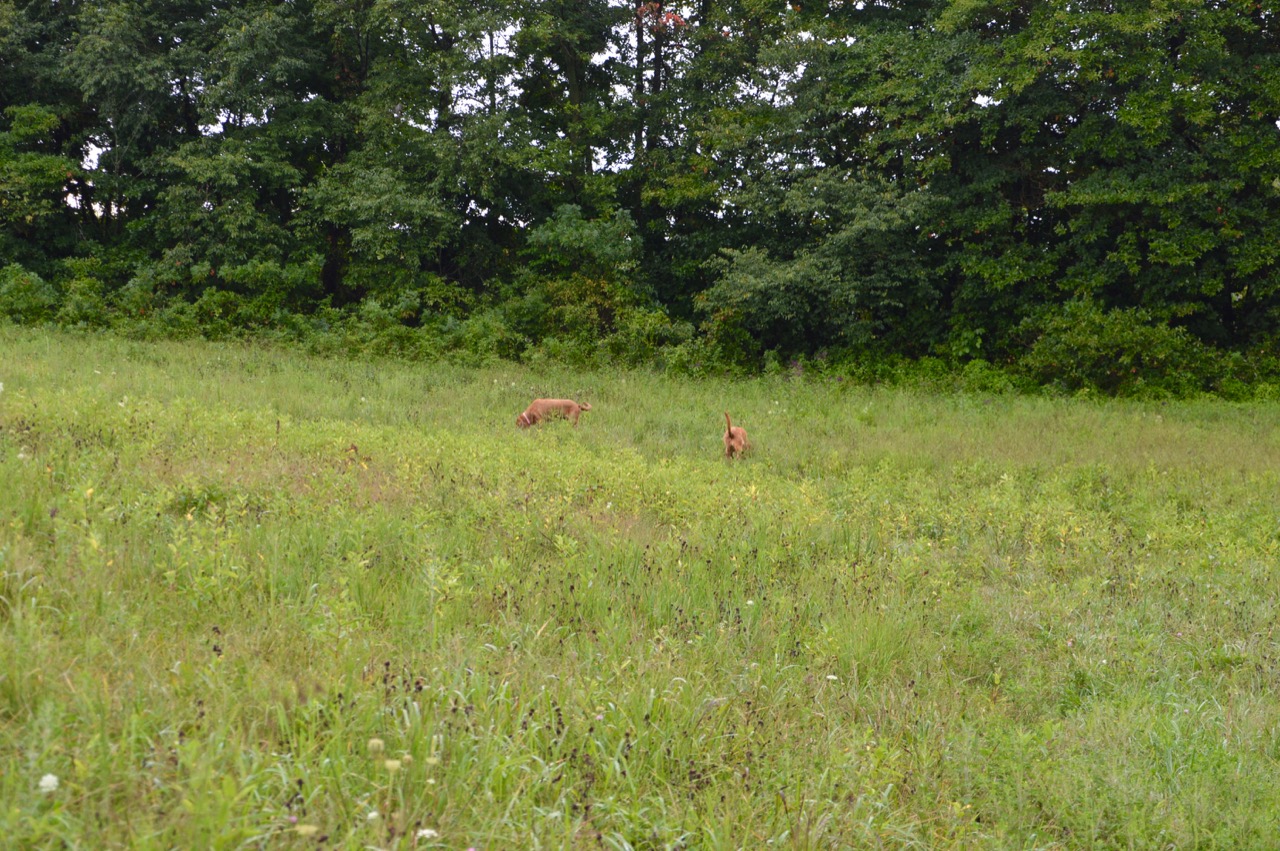 I took this with a 50mm focus to show how far the hounds get out in front of me at times. Another strange thing is, they never turn right to check out what I have called "the far right corner" in past posts. I am guessing there is no to little deer traffic coming out of the gully. I believe the ATV action last summer in that gully and in this field chased the deer away. Deer experts ... am I wrong? I know nothing about deer or any animal that is wild. 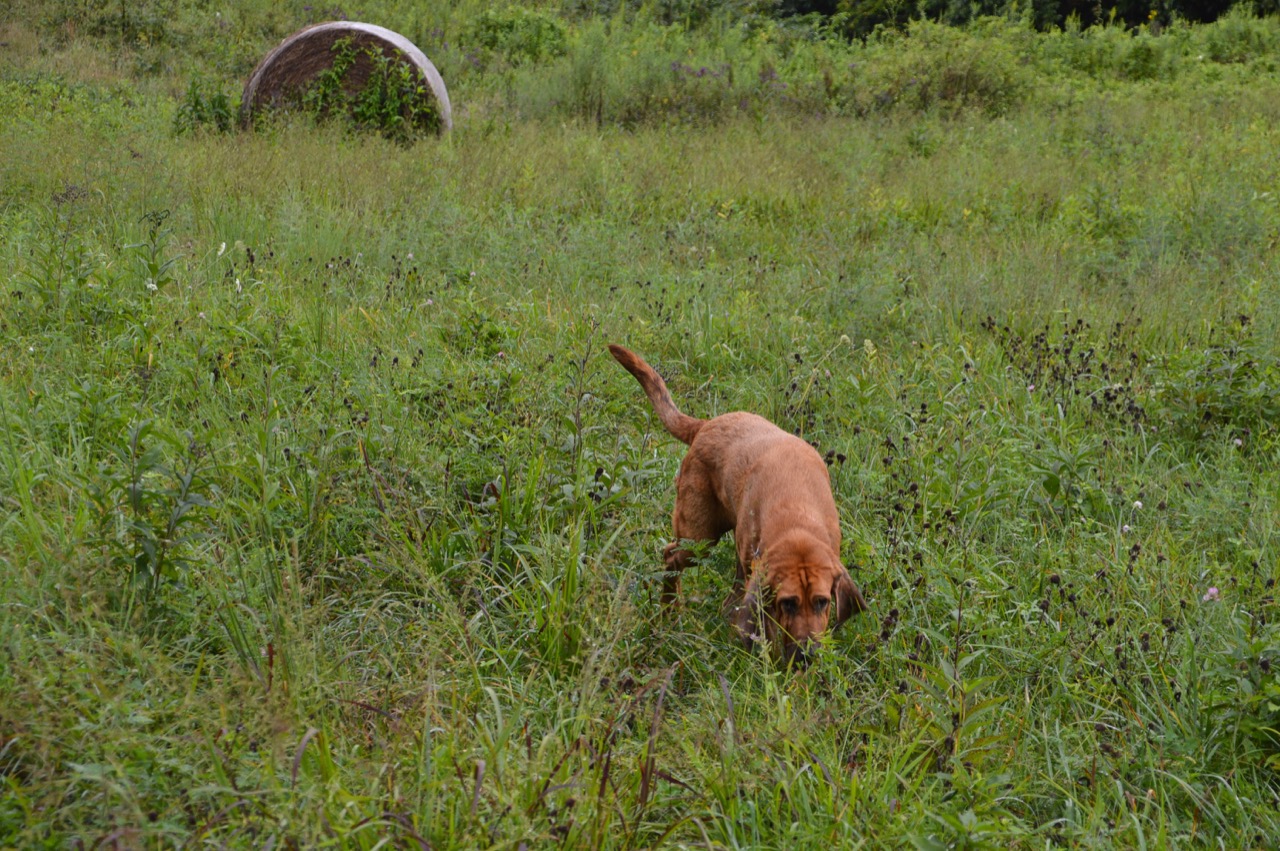 With all the weeds and wild growth in the field I can barely see the paths that we follow. When it's grass you can see where I have worn down a path, so defined that Google Maps will pick it up on their satellite photos. 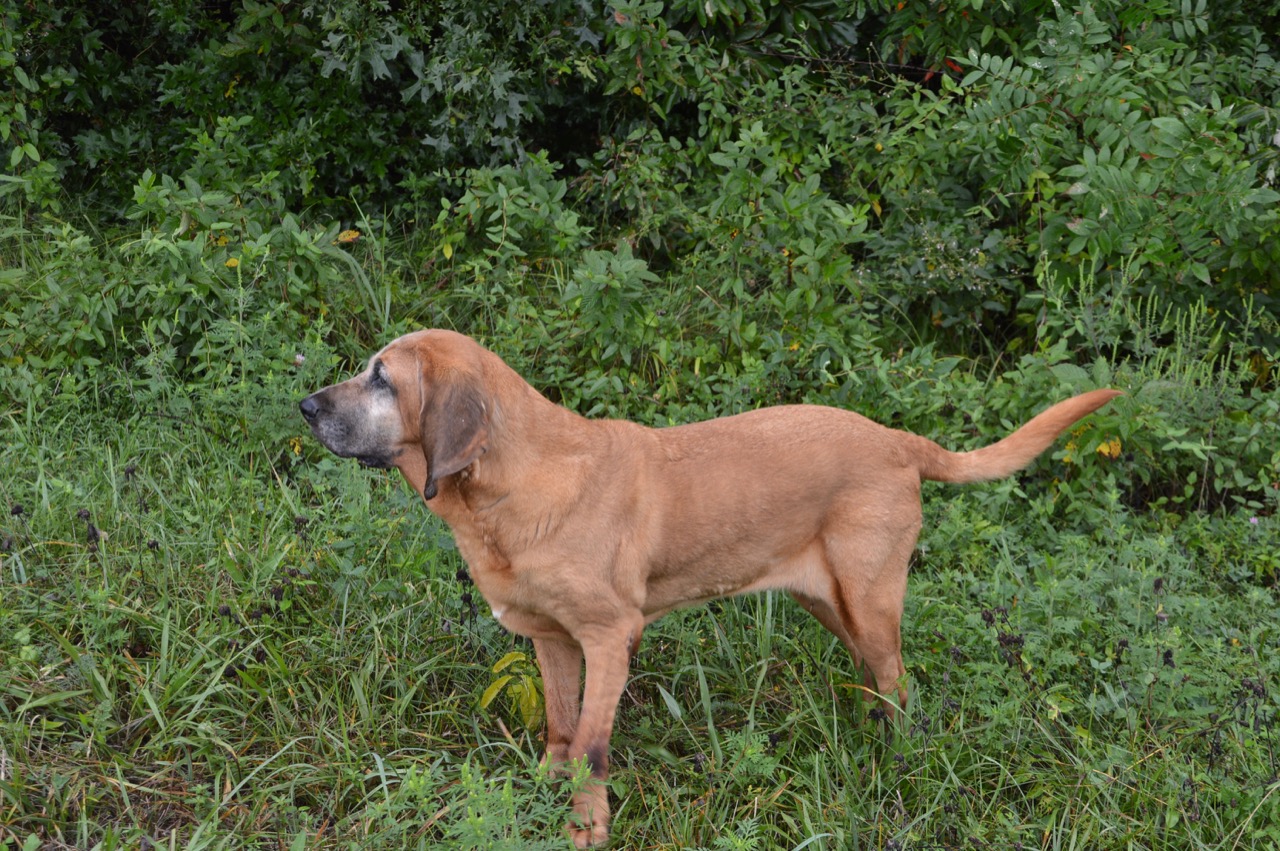 No photo today to prove it because Sadie kept moving when I tried to take a photo of her right side ... but I could not feel that lump this morning before our walk. It shocked me enough that I stepped back to take a look at it and saw nothing along her stomach line. 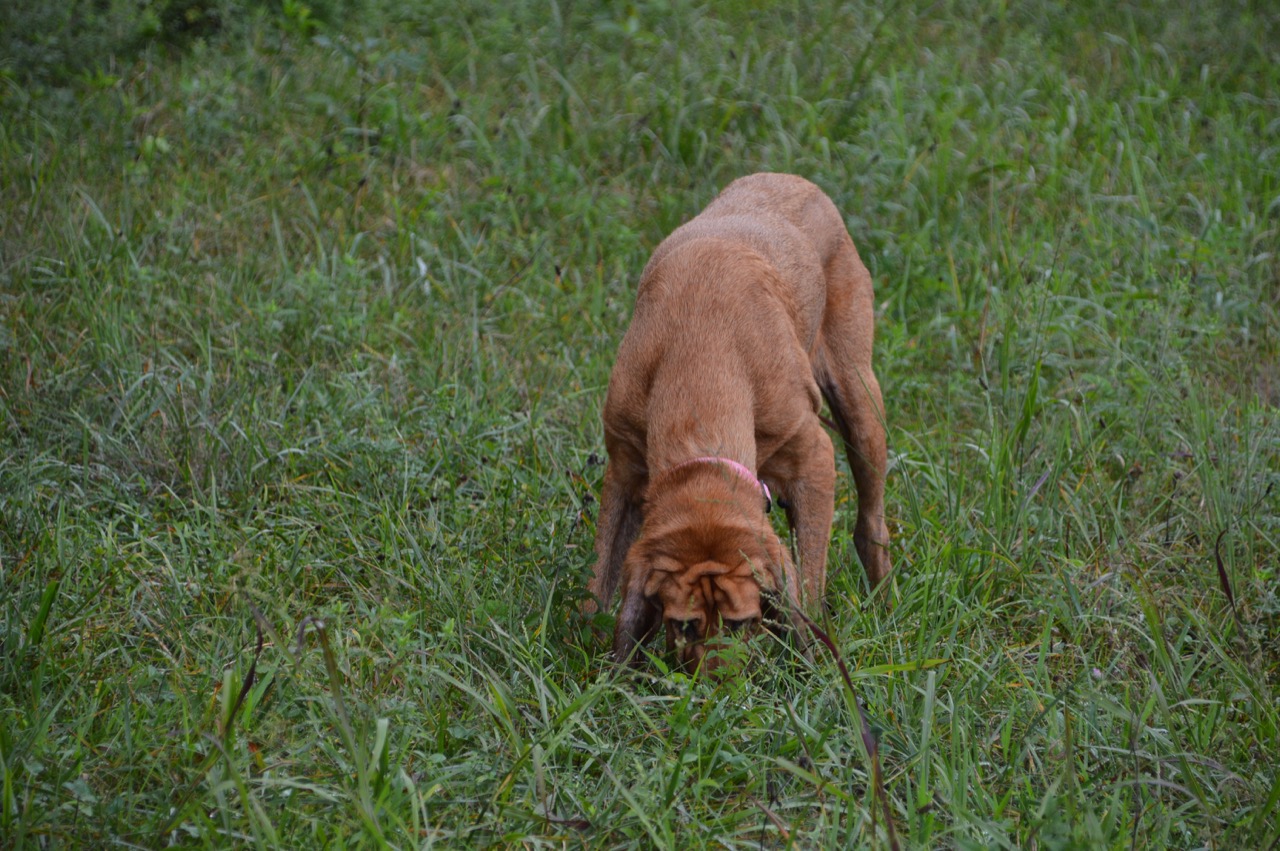 I still wonder what effect if any, deer scat has on Stella. The vet told me not to worry about it. 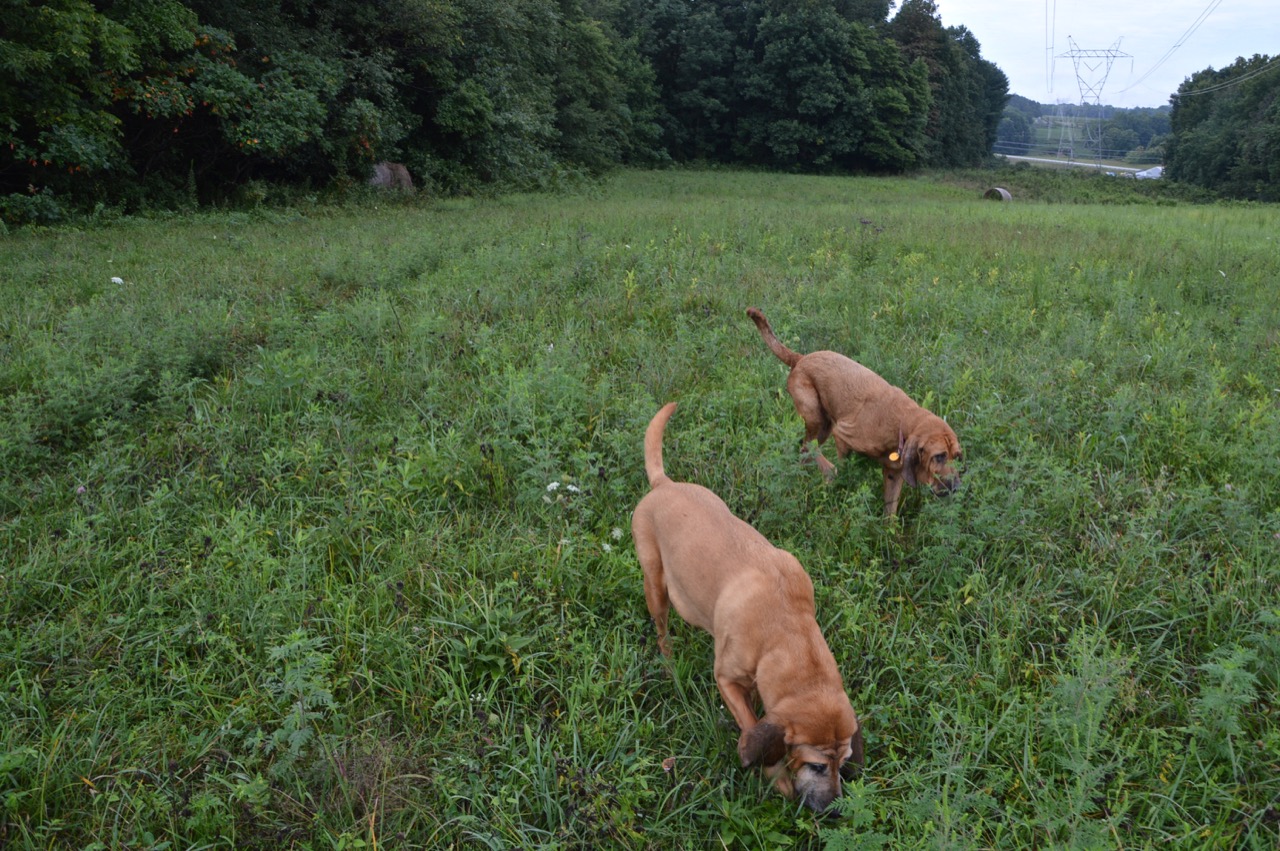 I guess I was wrong. You can see that lump on Sadie's right side. As I looked at it as she walked by me, it would disappear based on her walk or running. 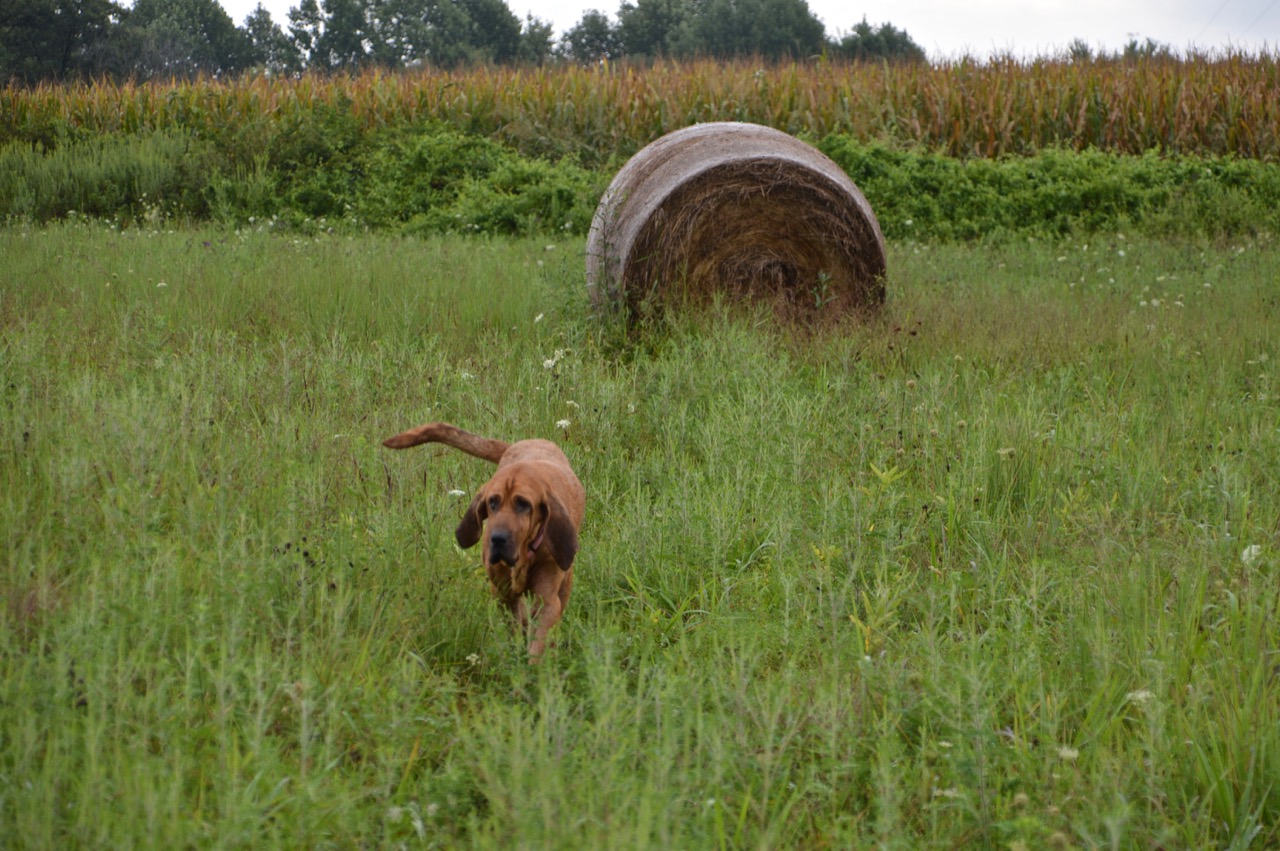 Stella has turned 9 years old and seems to be moving a little slower by the month. She wanted in the back of the FJ the other day when I was unloading groceries but couldn't jump like she could last year. She has no problem though climbing on my bed in the middle of the day for her siesta.  LOL 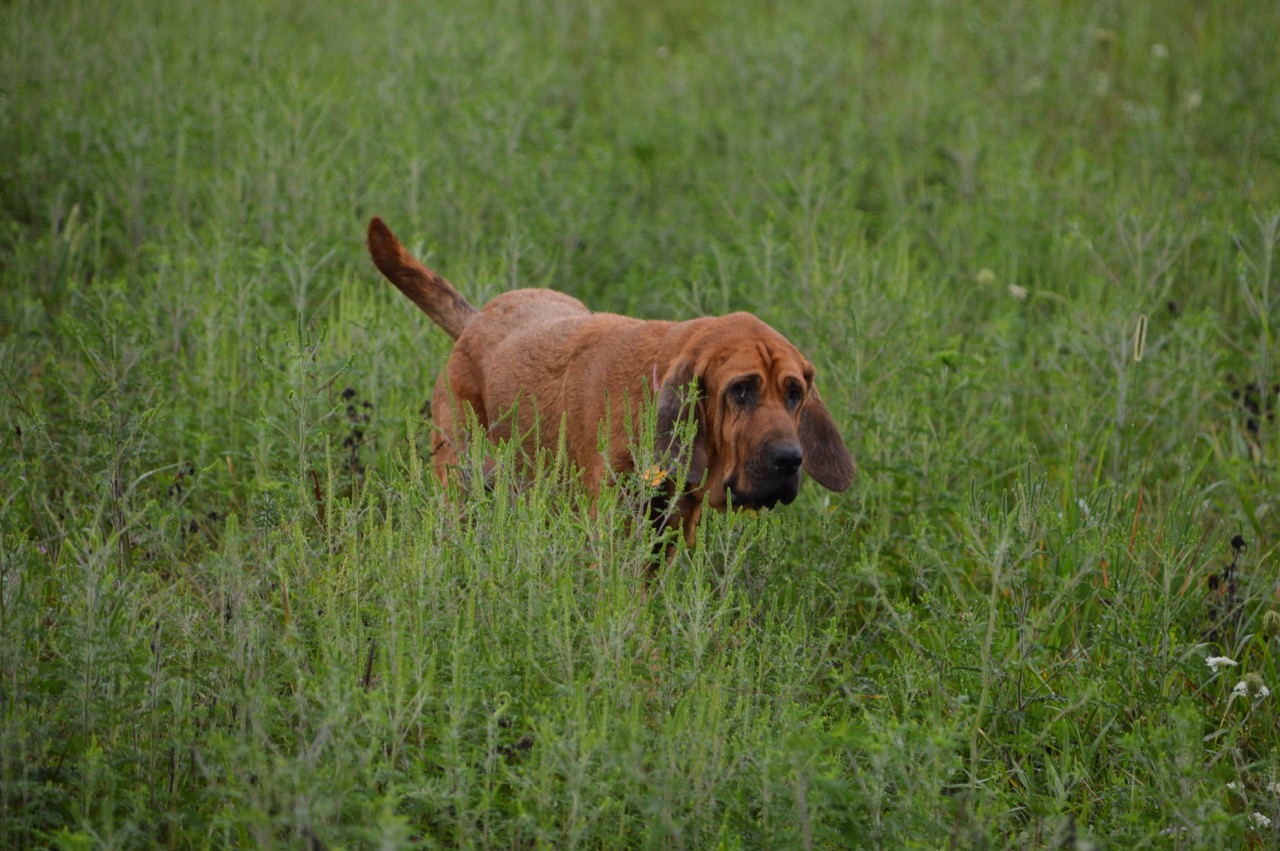 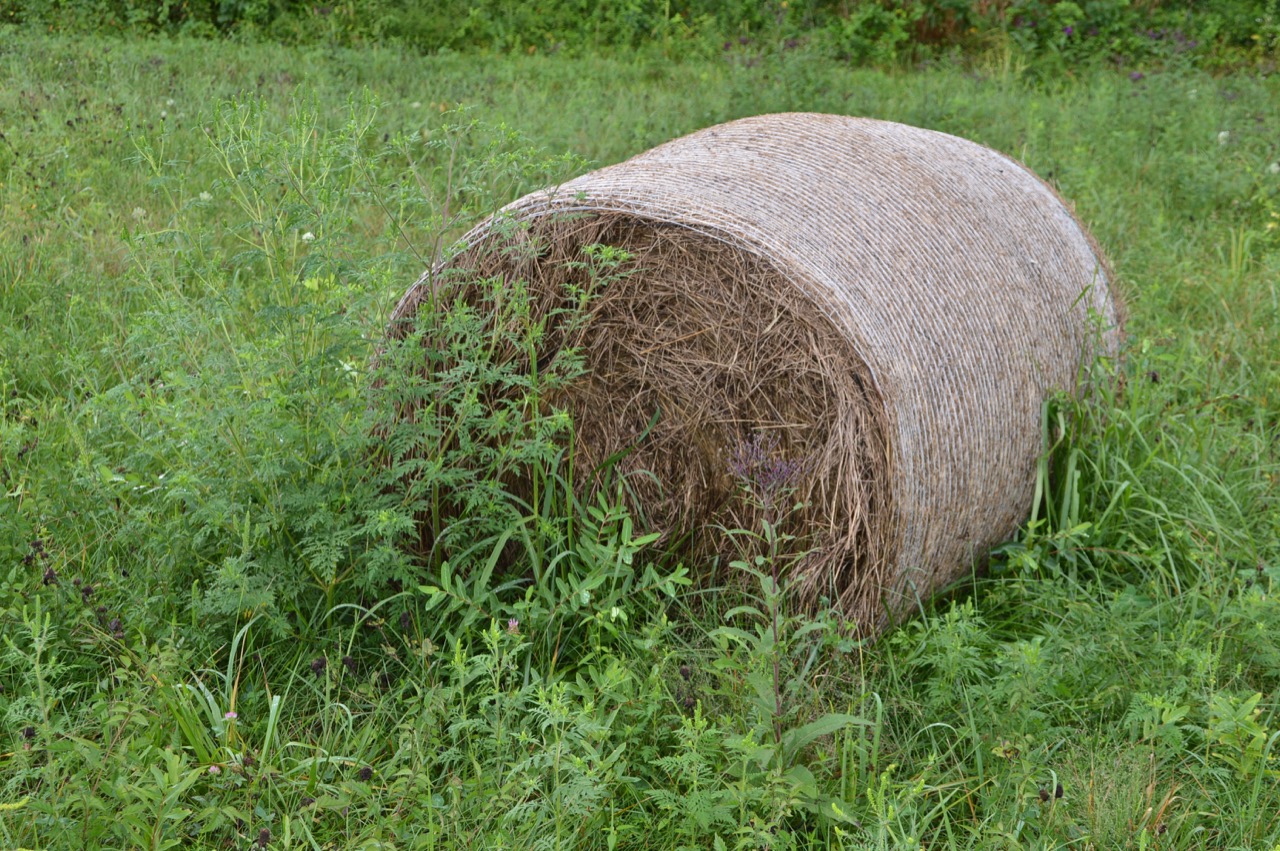 A smaller roll of hay but with the weeds starting to hid the roll you have to wonder if it will ever leave the field. Surely they will not leave it there. 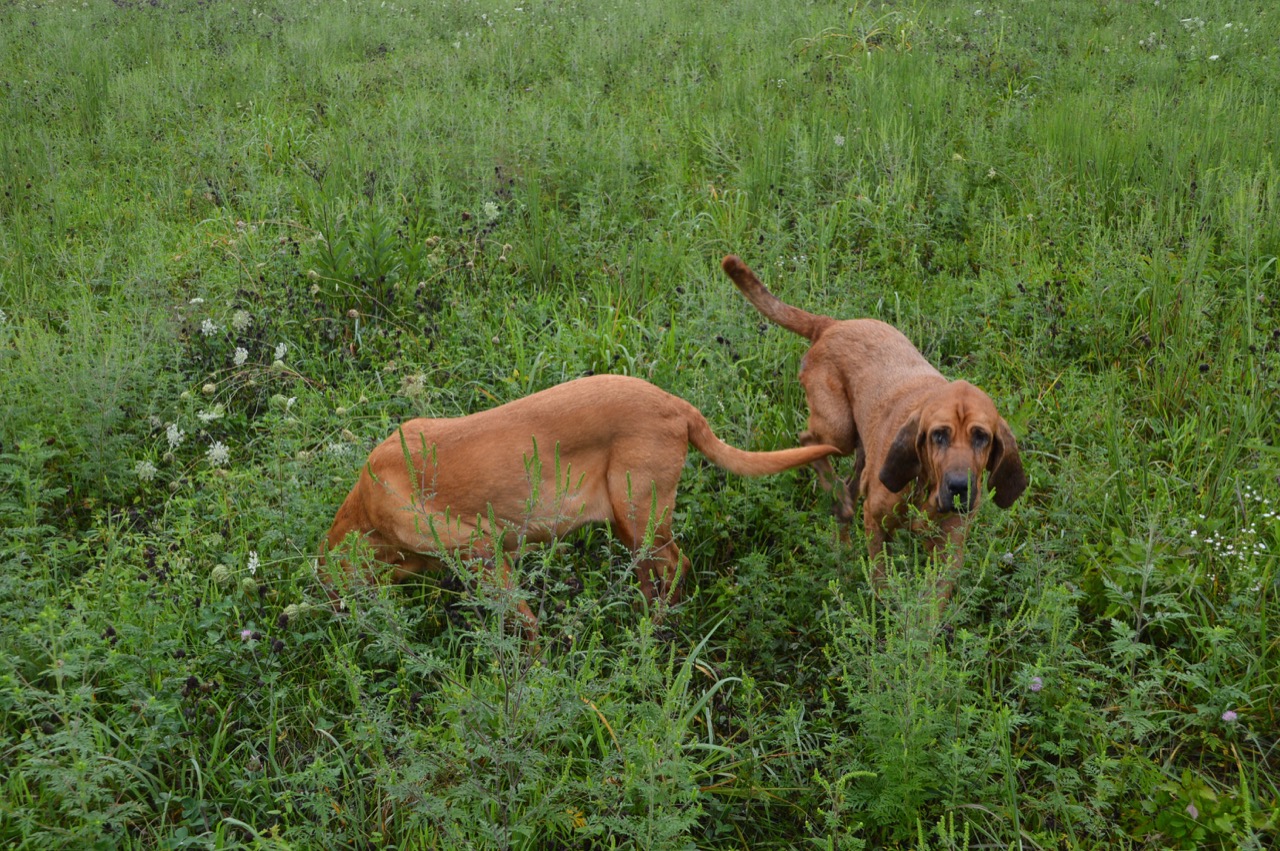 Even though it was a steady rain this morning when we woke up I cannot say the field was any wetter than it is sometimes with hard ground and heavy dew. I still use the North Face snow boots as my rain boots. At least they are being used in some way. 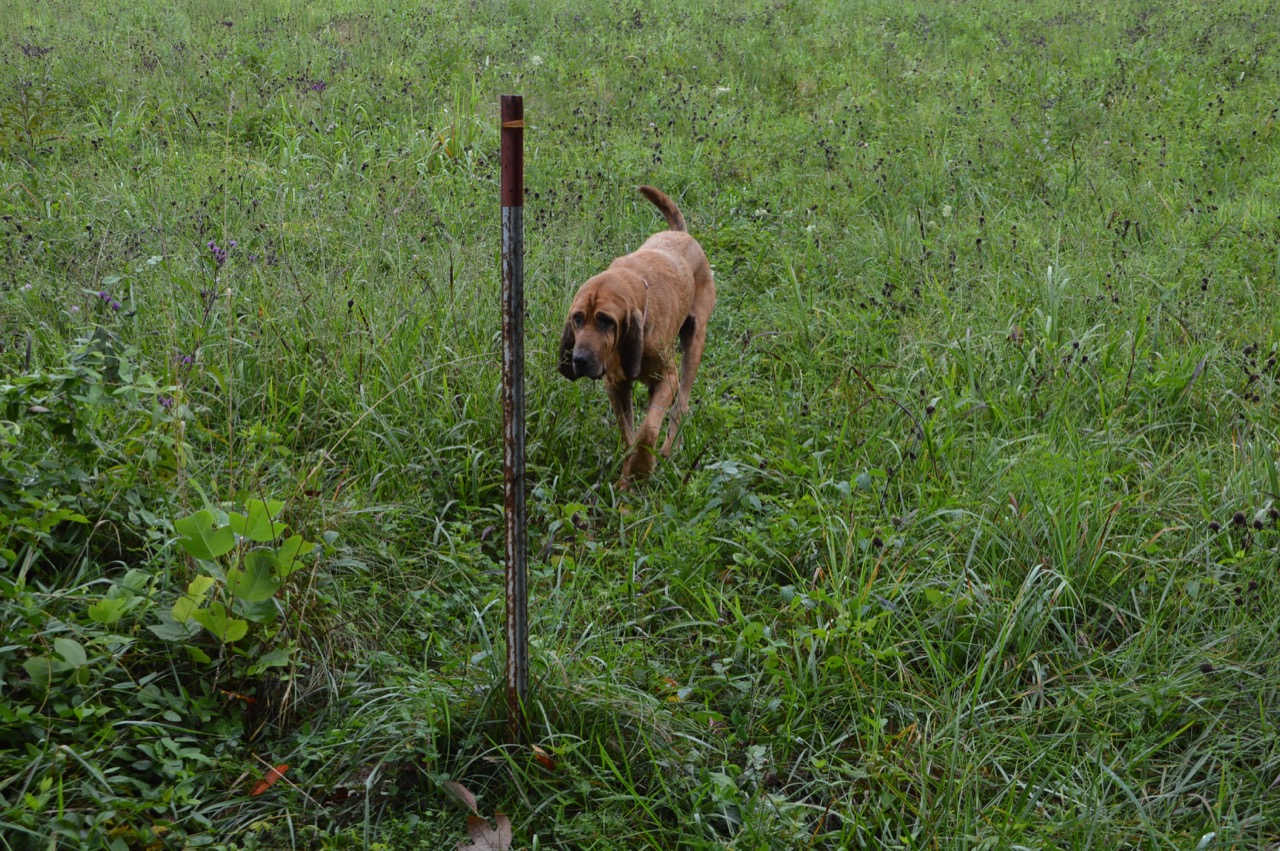 Property line pole, where the neighbor told me he wanted it left there after the survey. What is interesting his survey does not match my survey from 25 years earlier, completed by the same survey company. By his survey I have gained a lot of yard, but now there is the question ... is the fence along my driveway on my neighbors property or my property?

At the base of the driveway bank it shows that to be the center line of a 70 year old railroad right-of-way. It is 15' on each side of that center line. Which puts my property line 13' past the fence line. It's much like the right-of-way the state highway owns, yet people have yards and mow within that range of property.

When I finish my projects and am bored some morning next month I will take a trip downtown to the courthouse and have someone explain to me what all of that means. 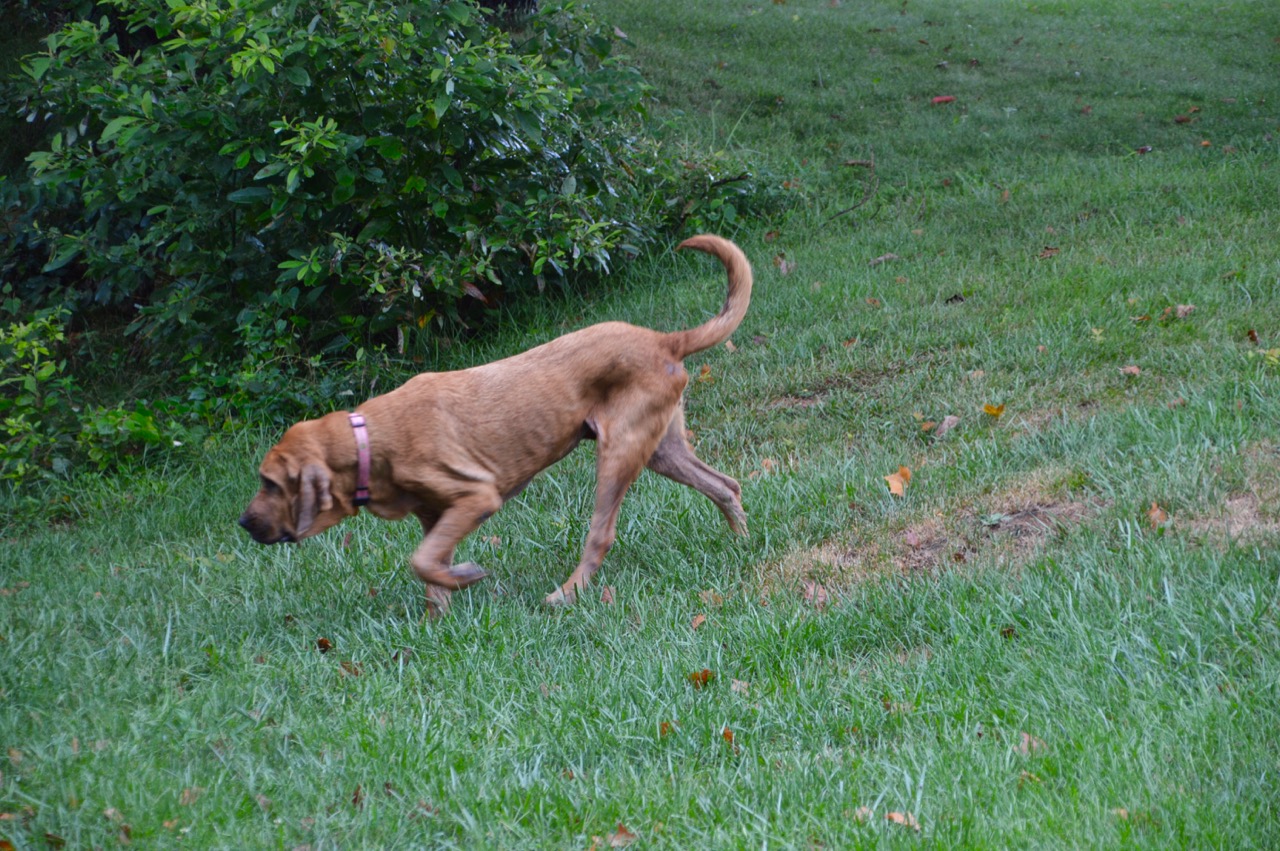 Stella made an abrupt right turn as she headed for the house. She doesn't like getting her paws wet any longer than she has to and whenever it rains she feels the driest way to walk is on the river rock that is along the back of the house.

Well the sunshine is out at 11:07am. I might start digging my ditch after the hounds have their lunch. That sounds like a lot of work and besides it is Friday, a day off.

All is good in 'the tropics' of Southern Indiana ... thanks for stopping by.
By Steve at 8:21 AM