Not Bad For A Monday 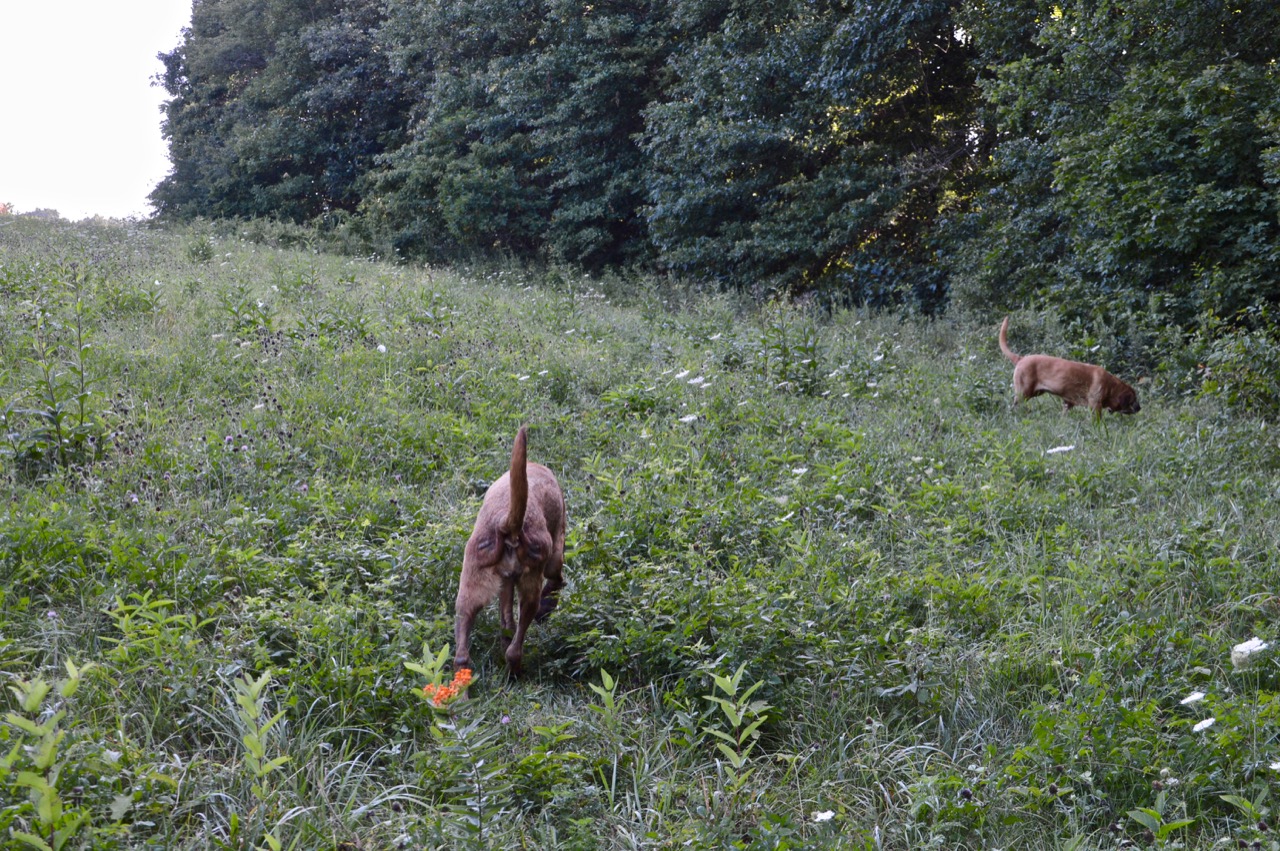 It is pretty well set in stone that if I don't start doing something outside right after the morning hound walk, it most likely will not get done. Unless it's mowing the lawn. Otherwise I fall into a routine of downloading my photos into my computer and editing them right after the walk. They might go into a blog post and all of them will be exported to and saved on Flickr. A blog post may or may not be written. IF I move into some other activity besides the computer right after the walk ... it's a productive day. 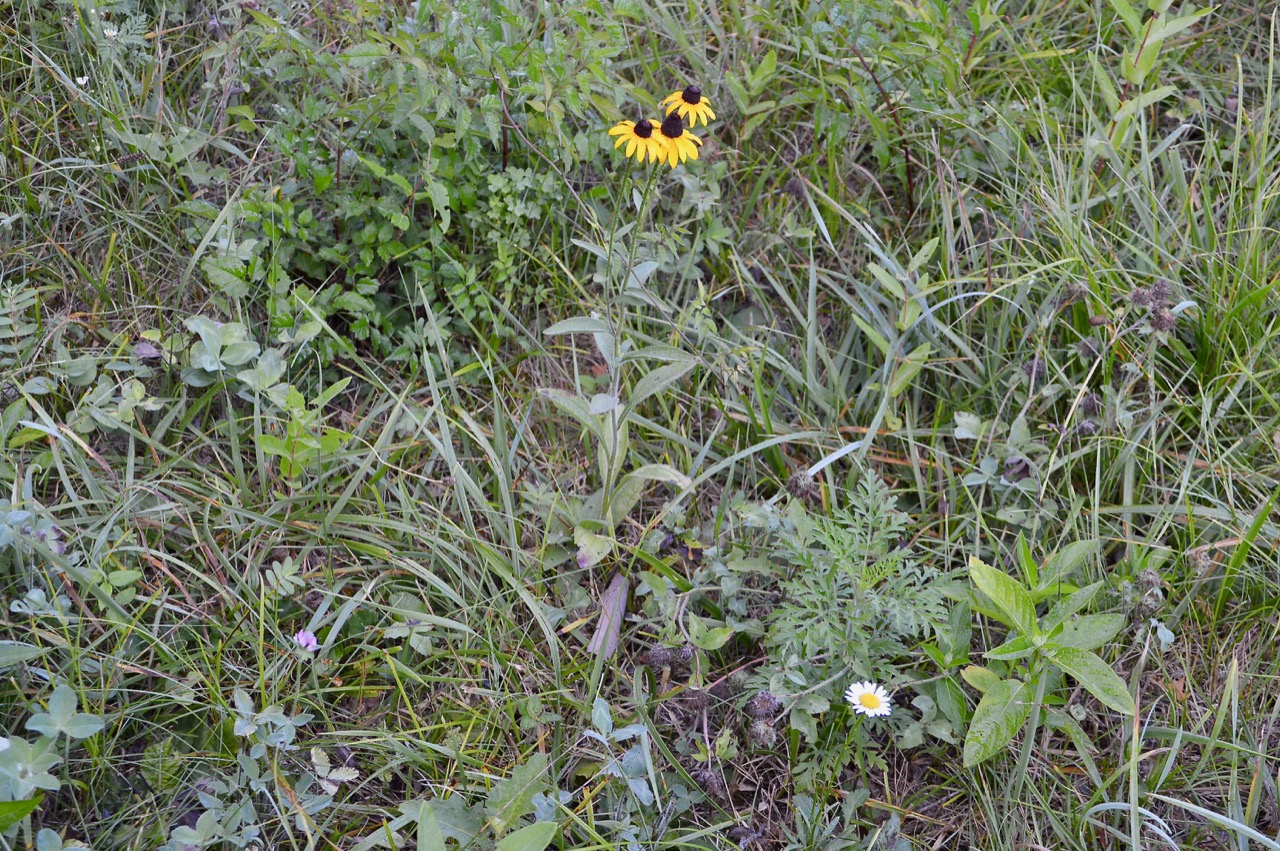 This gives you a pretty good range of the different flowers, weeds etc that are growing in the field right now. The field is so much different than it was when it was cut in June. At that time it was almost all tall grass.

Since my plants in front of the house are too far under the overhang to capture the rain water, right after my hound walk I stepped inside to set the camera down, pickup the 3qt pitcher for water and headed back outside to water the Azaleas and the flowers that I cannot remember their names. Since my hose only goes so far I use the pitcher for the last three plants by the tv and internet satellite dishes. 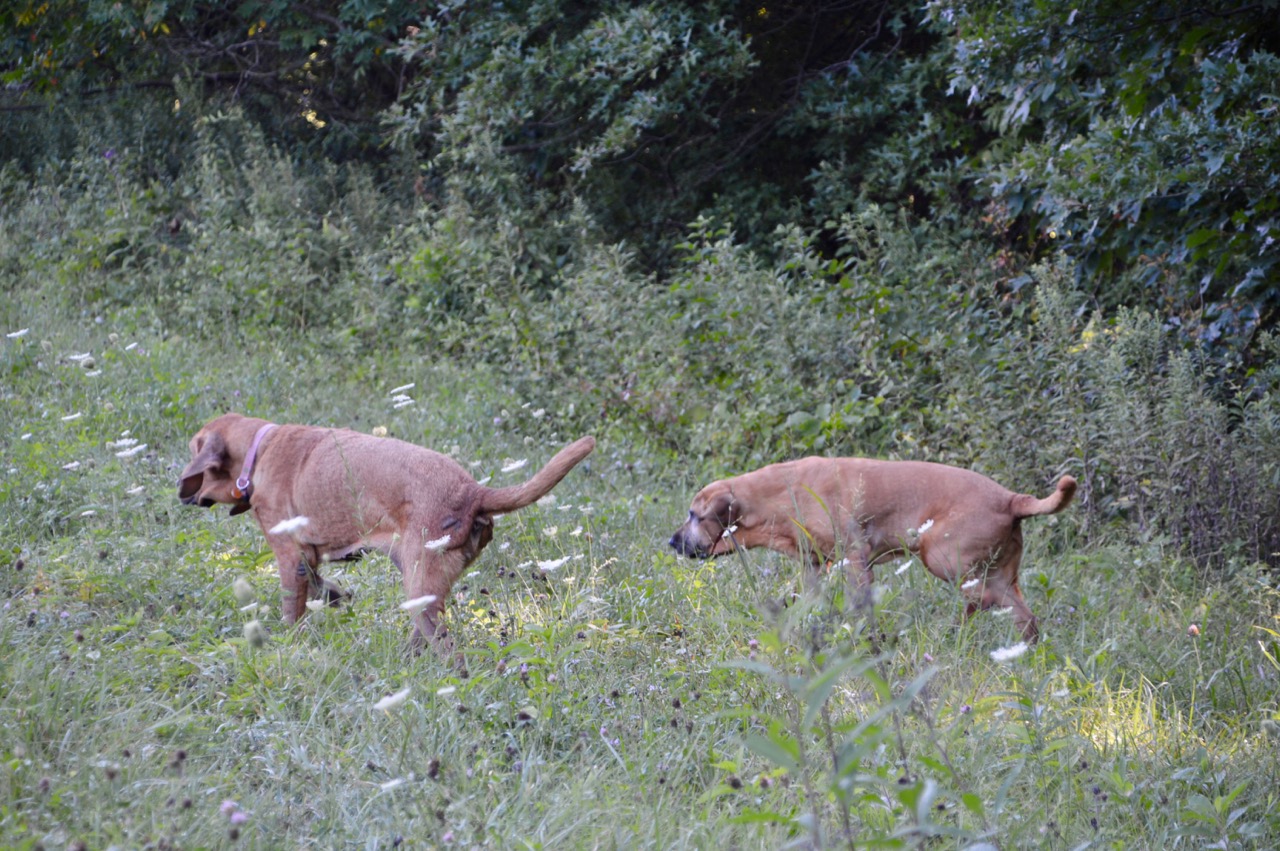 We started the walk early but that humidity never left overnight. The old thermometer in the carport was a mark under 90° this morning and the air was thick. Low 90's were predicted highs but high humidity makes it feel much hotter. The hounds didn't mind, it was much cooler in the shade as we took our walk. For some reason Stella joined us right from the start this morning. 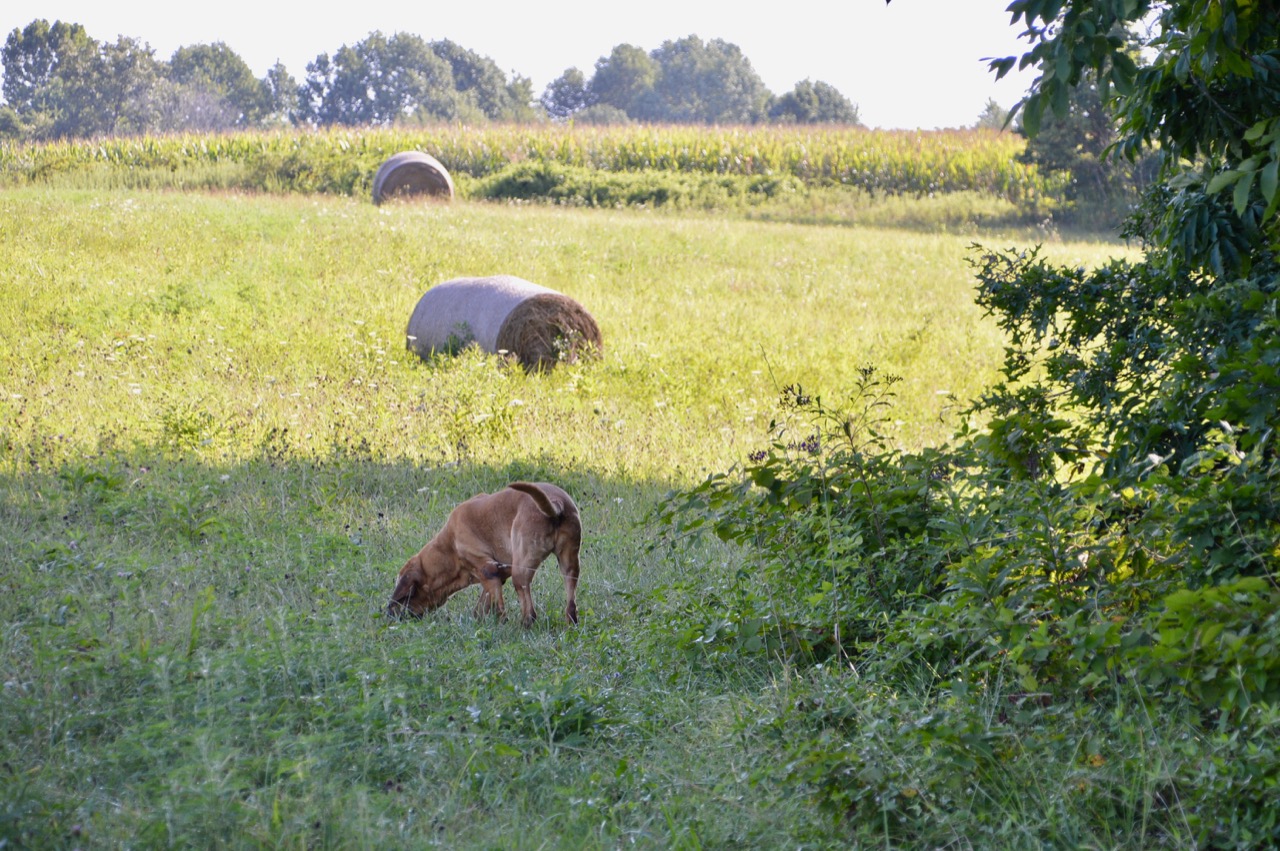 Knowing it was going to be watering day I was pretty sure I might get some things done before it gets too hot by 1pm. I use to paint houses in this kind of weather centuries ago when I was 19 or 20. Now I have a choice on whether I want to do anything outside in this heat. Lawn mowing is about all I'll do now, when it's hot. It's too wet to mow in the mornings so I don't have a choice but to mow in the afternoons. 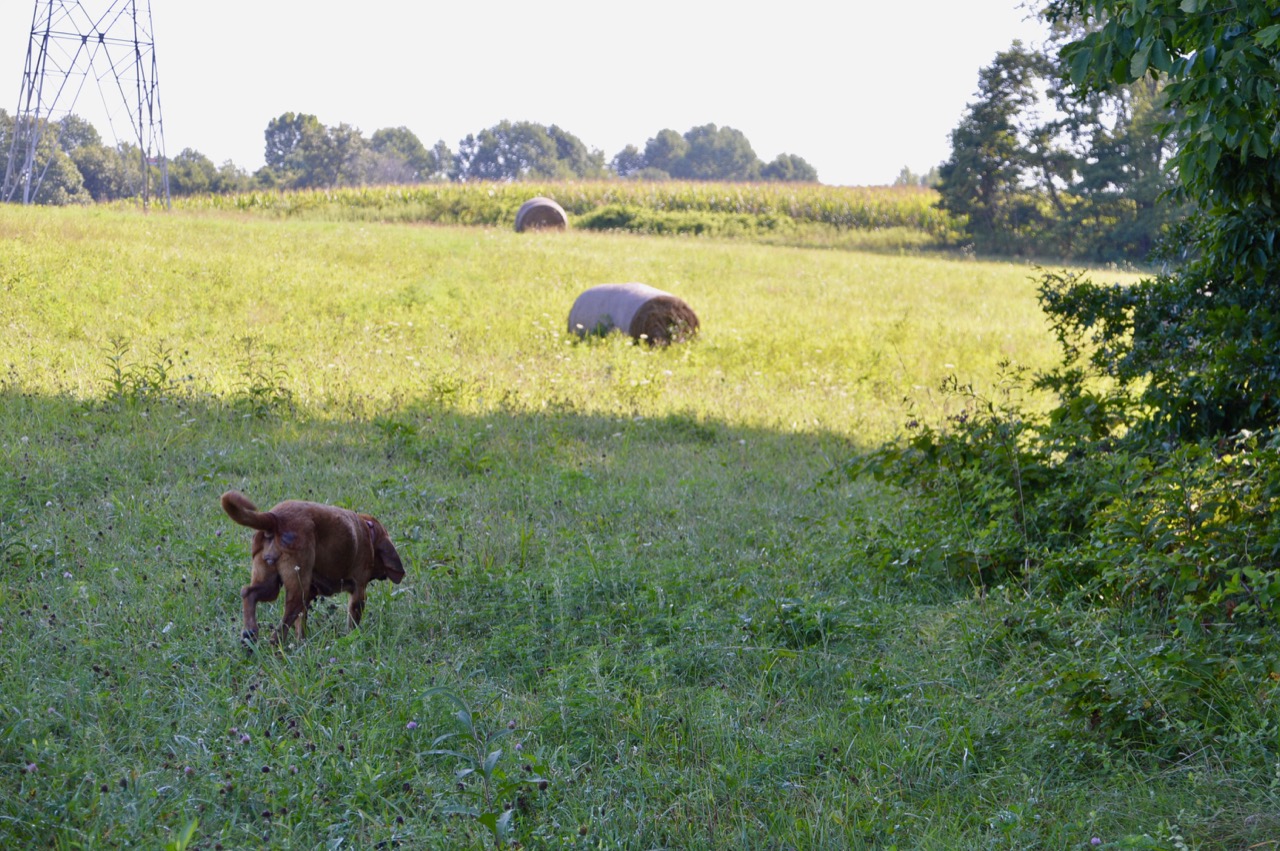 There were two things I wanted to get accomplished this morning. The tires on the FJ needed some air. Little did I know just how hard that task would be. Since I was past the 15 days for returning my TV I decided it was time to recycle that huge box the TV came in. Of course to do that I had to take out all of styrofoam packaging because that is not recyclable. Since it wasn't I was going to end up doing something I had not planned on but it worked out well. 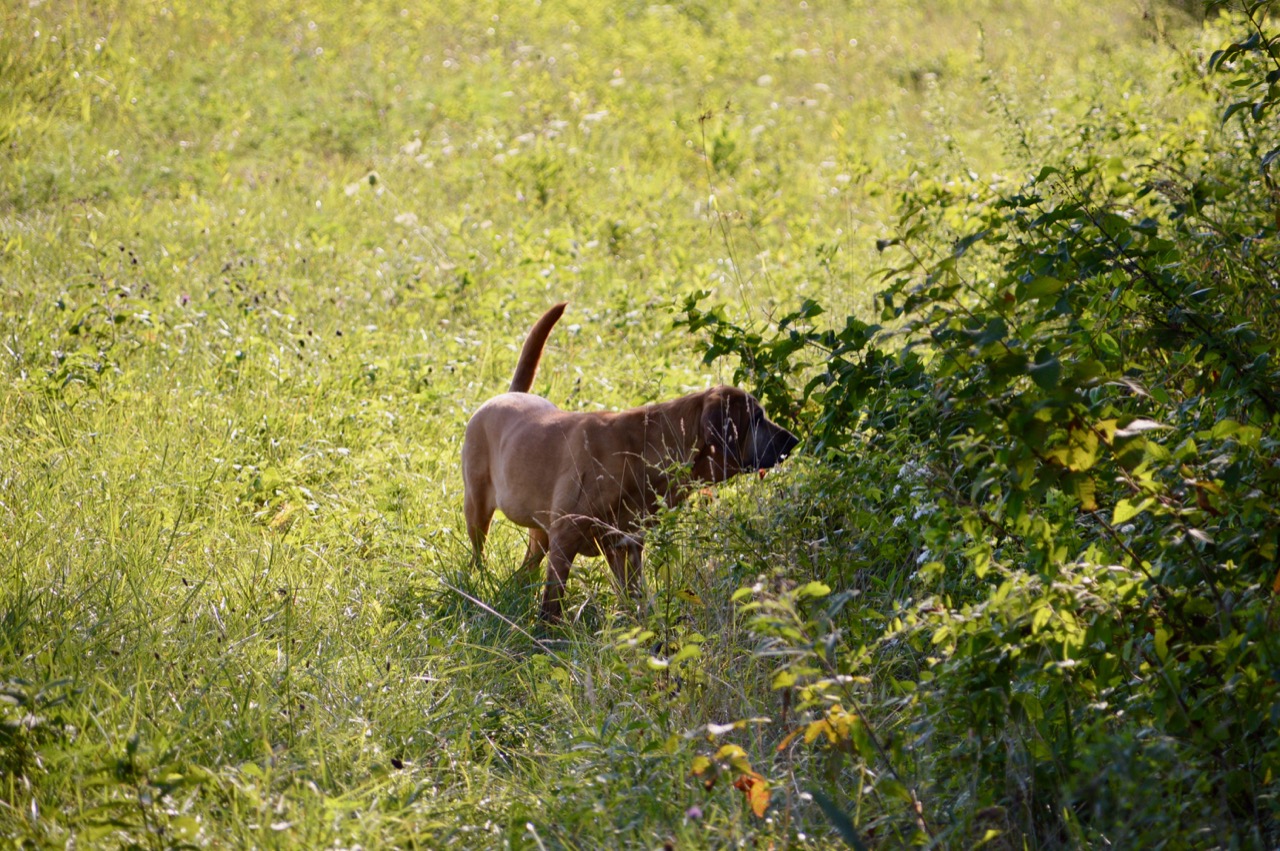 I didn't hear any tree limbs breaking this morning as I walked past the woods. Evidently Sadie did. She was almost in an agitated state of mind while she looked into the woods, running back and forth to get a better view. Finally she decided she had better things to do than run through thick brush and thorns just to see what she had heard. She turned and went back to her exploring in the field. 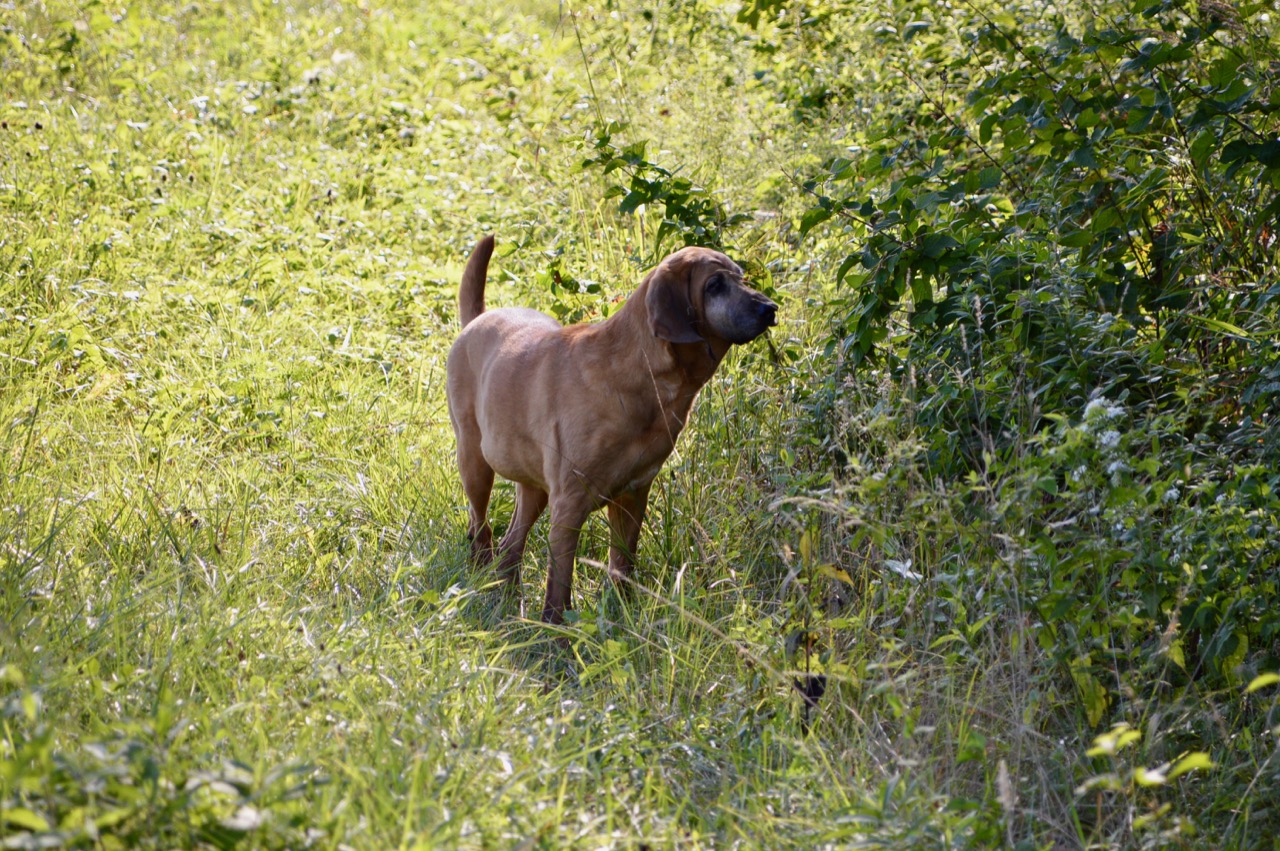 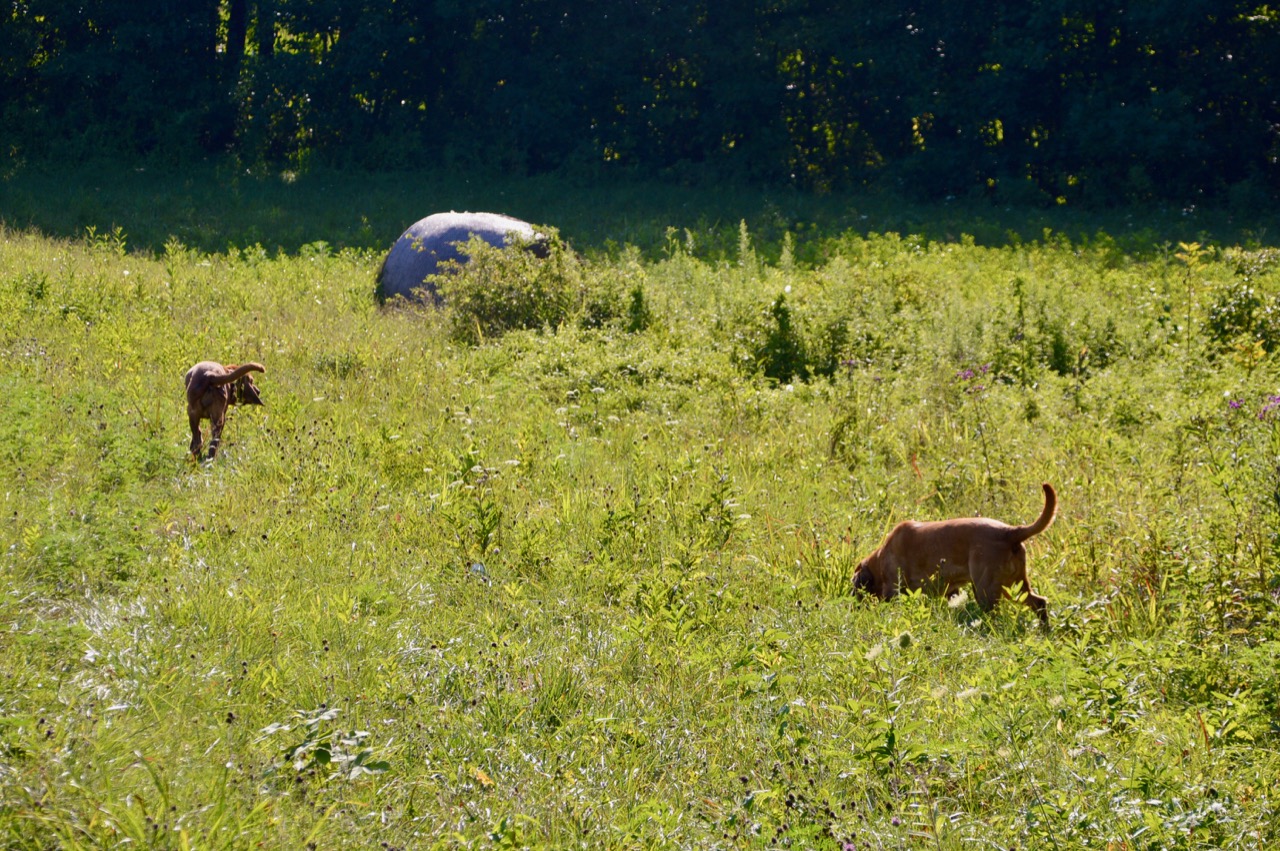 Stella was in the mode of continuous non-stop walking. If I was in the way she would walk on my foot and would never even look up at me. She just kept walking. Maybe she had already decided it was going to get hot today and she wanted to get back to the house as fast as possible. I am never sure what her reasoning is. 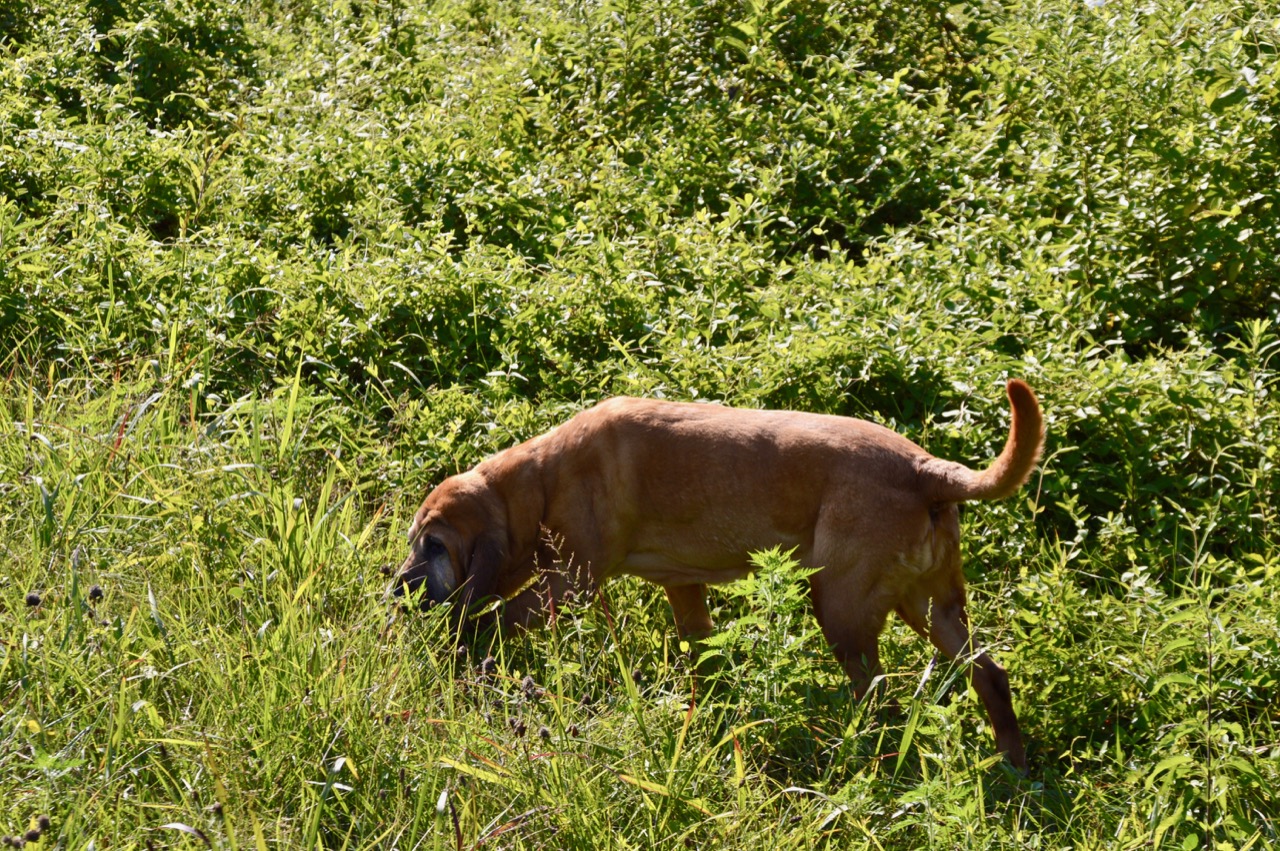 With a nice wind from the southwest, I knew if I burned anything, the wind would keep the smoke away from the house and from me. Some readers may cringe and cuss at me under their breath as they read this ... but yes, I burned that styrofoam along with the case I received last December when a Christmas present arrived in dry ice.

With a fire going strong and that terrible black chemical laden smoke blowing toward the northeast, I ran in the house to get the trash can under my desk that includes nothing more than all the street addresses I cut off of my mail before recycling the mail. Since I am a fire lover at heart (not a fan of the forest fires out west though) I grabbed all of my old business records and slowly fed them to the fire. I could have recycled them but it would have been too time consumer of deleting addresses and bank account numbers from the paperwork. Six years of business records went up in smoke, not a trace of them anywhere. 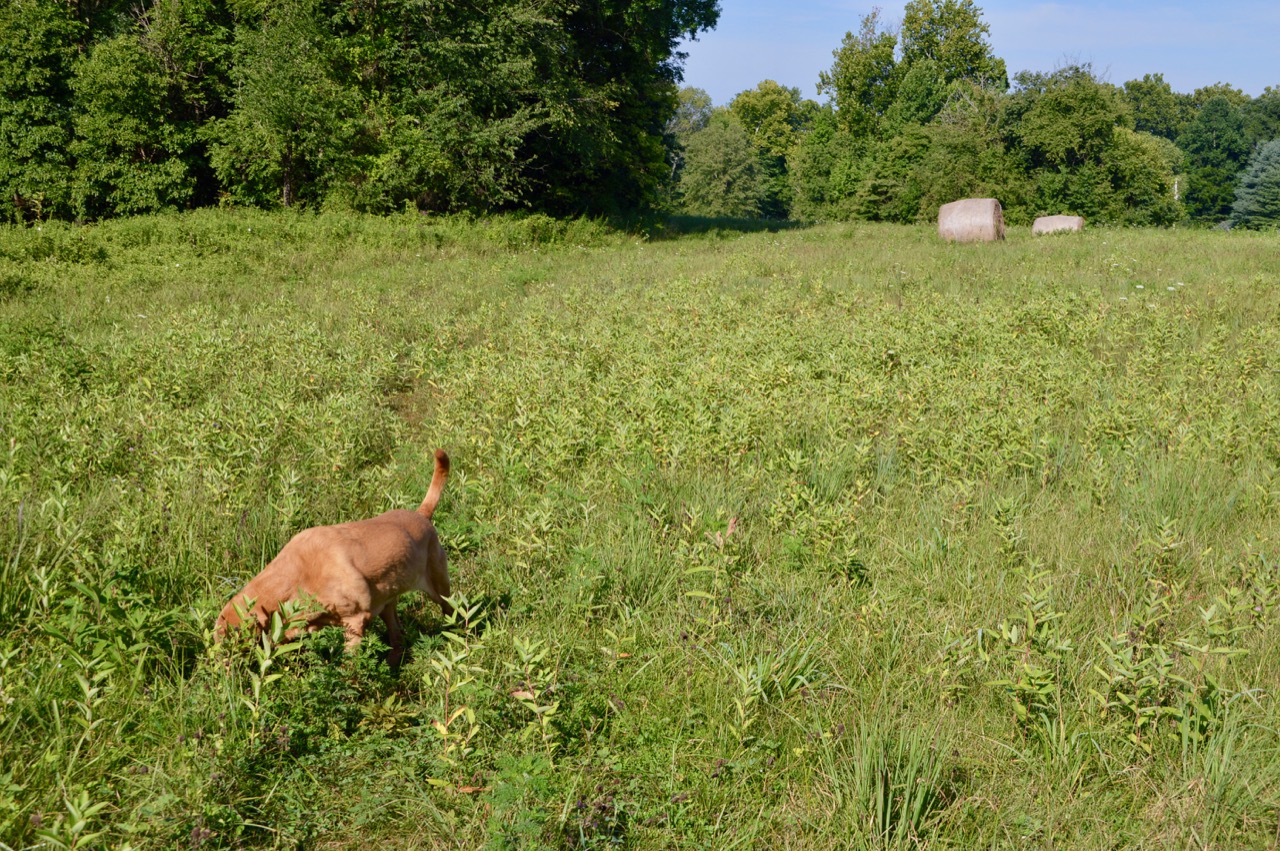 By noon the three hounds outside while I burned paper, were begging to go back inside where the AC had cooled the house the past hour or so. I did not have a camera handy to take my proof but Stella not only had another large drool this morning, but she had been eating dirt. What do you get when you mix water and dirt .... MUD ... hanging from both sides of her jowls. Where's the drool rag? 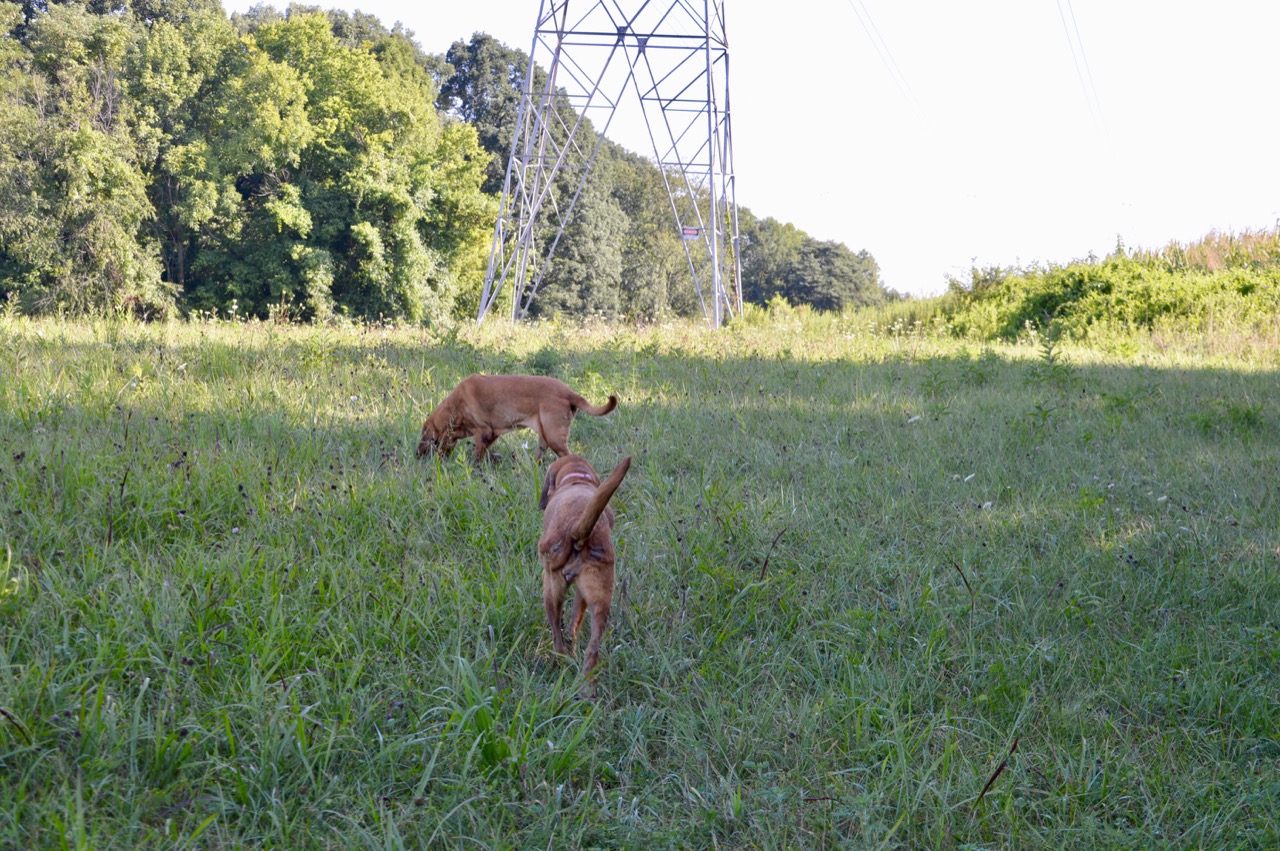 It was close to lunch time for them and hot enough that I knew once I went inside feeling that nice cold air I wasn't going back outside for a while. Probably not until after 8pm, when it is nice enough to sit outside. Like I said the other day, for some reason there has not been a problem of bugs, gnats or mosquitoes this summer, so sitting outside is enjoyable that time of day. 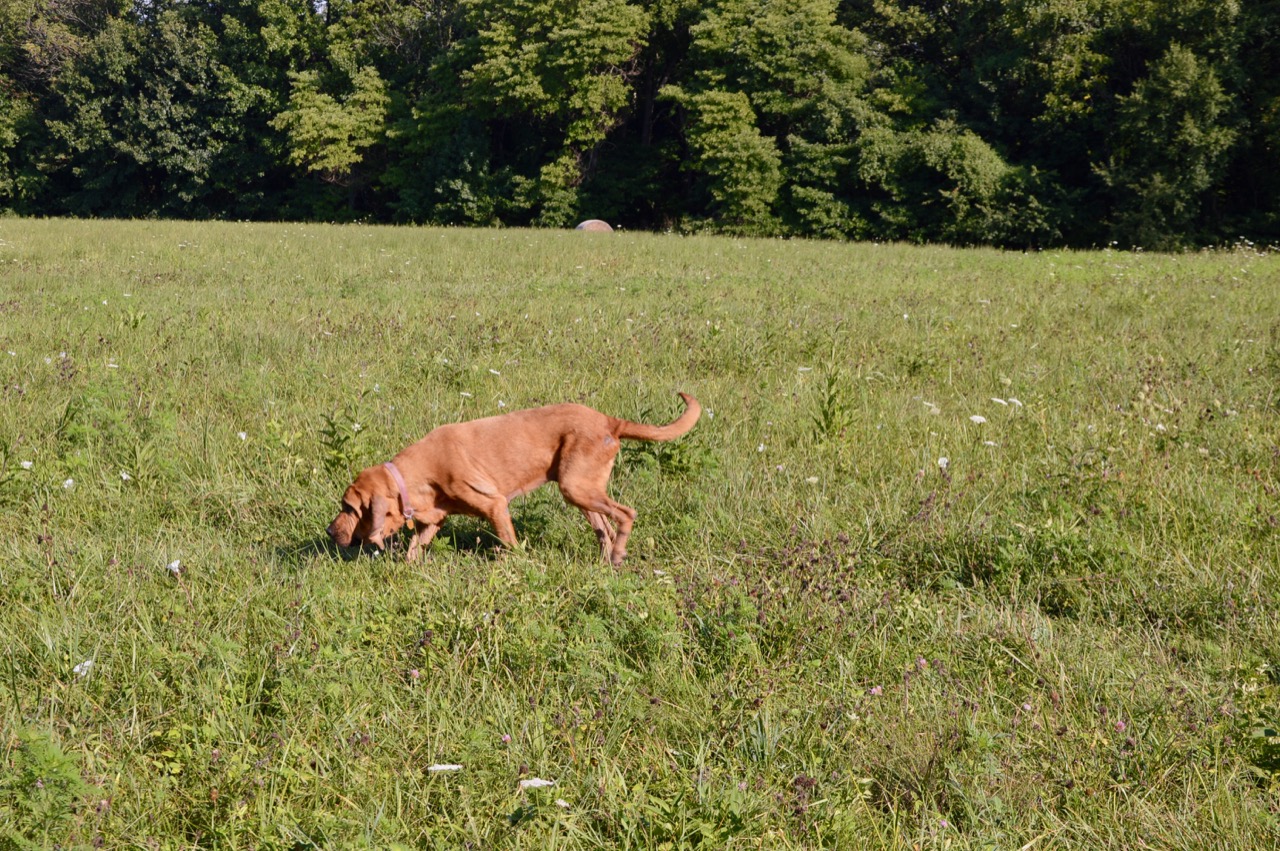 I have been able to hold off lately and fight through the cravings for ice cream, cookies or candy. I'll eat healthy throughout the day and early evening but by 9pm it is pure insanity craving sweets. Eating sweet fruit does not solve the craving ... drinking water does not either ... only ice cream, cookies or candy will work. Each night is a battle. 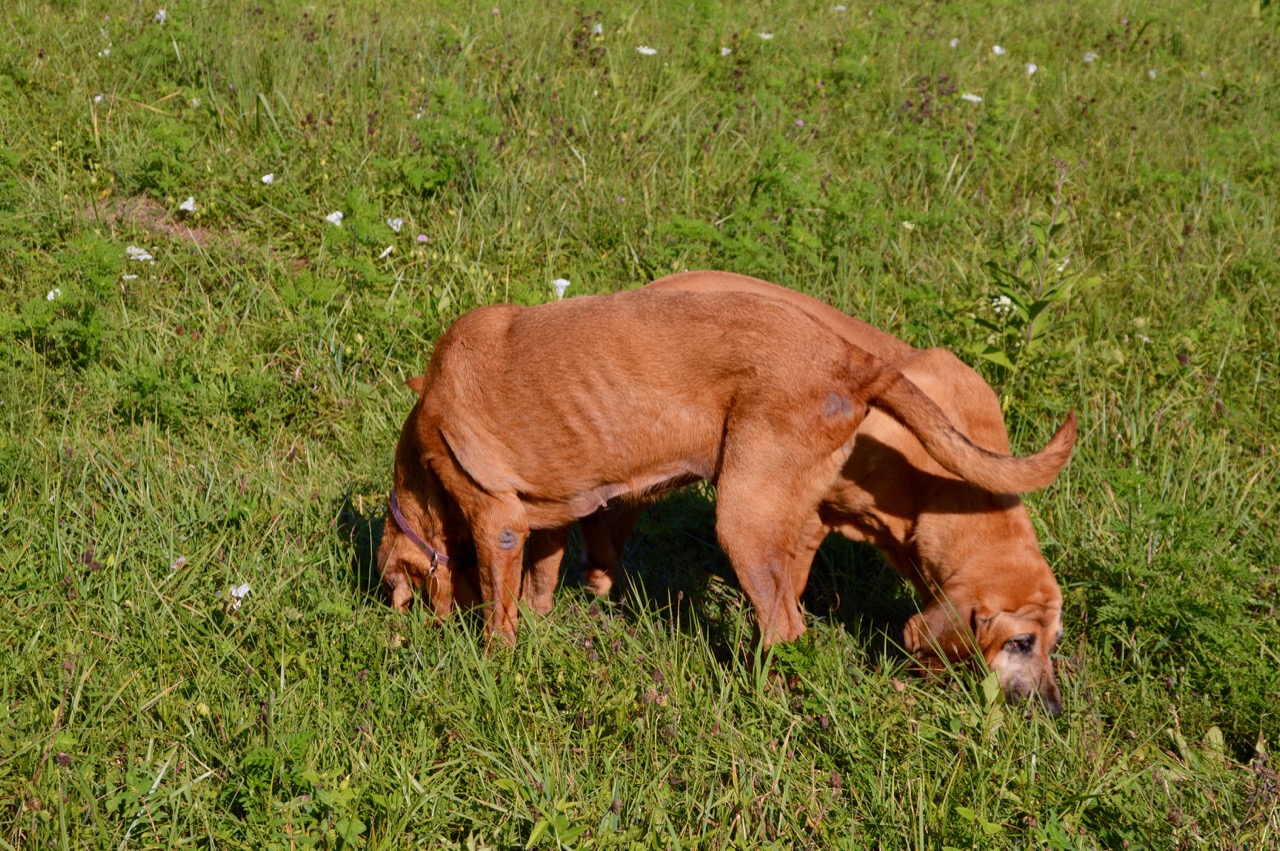 Stella has started to get a little more kibble in her bowl starting yesterday. I am going to see if I can put some more weight on those ribs that are showing. She was a lot skinnier than that in February 2017 but gained a lot of her weight back this spring. She weighed 79 pounds in April. 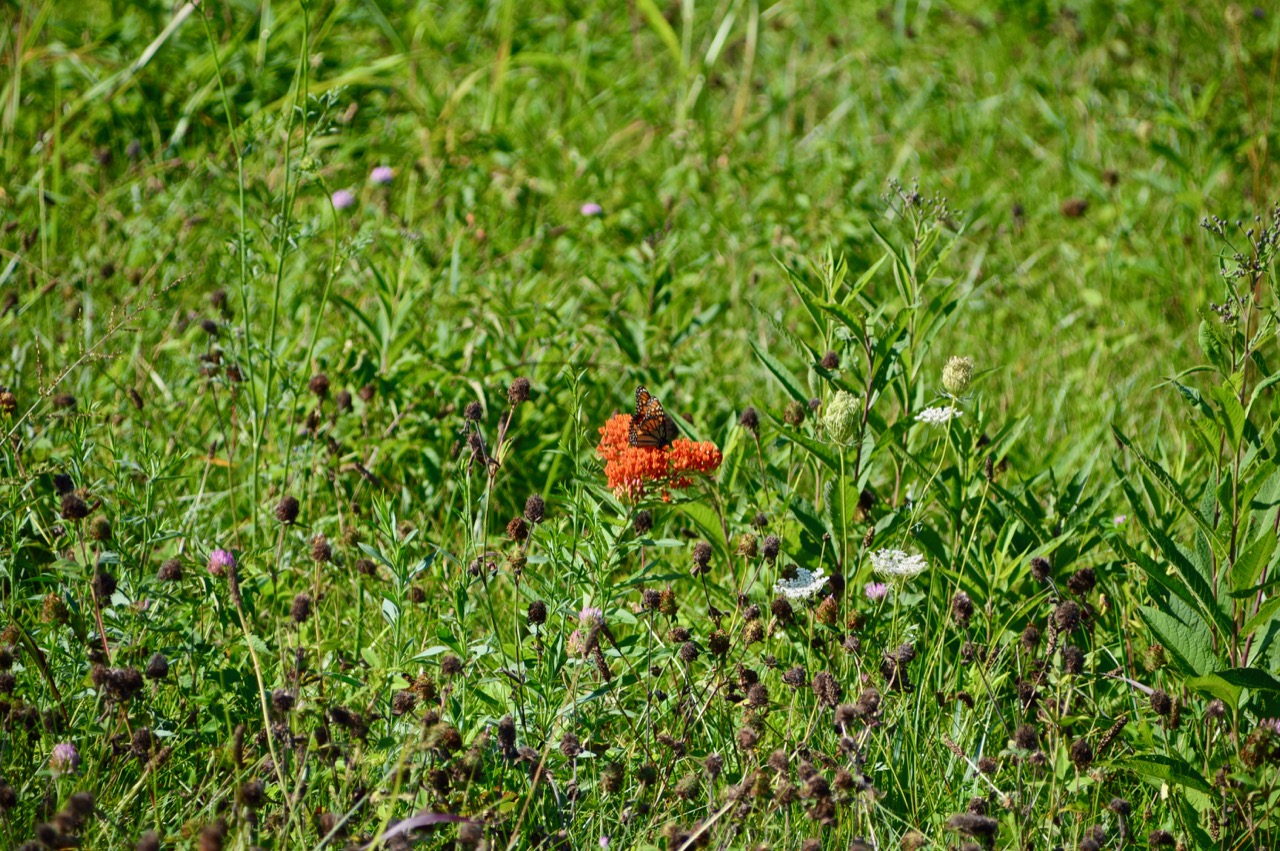 It might look like two butterflies but it's only one this morning. This flower is about 10' from the yard and at the end of our walk if we take the alternate path. I let the bloodhounds decide which path we take and believe it or not, they don't choose the same path all the time. 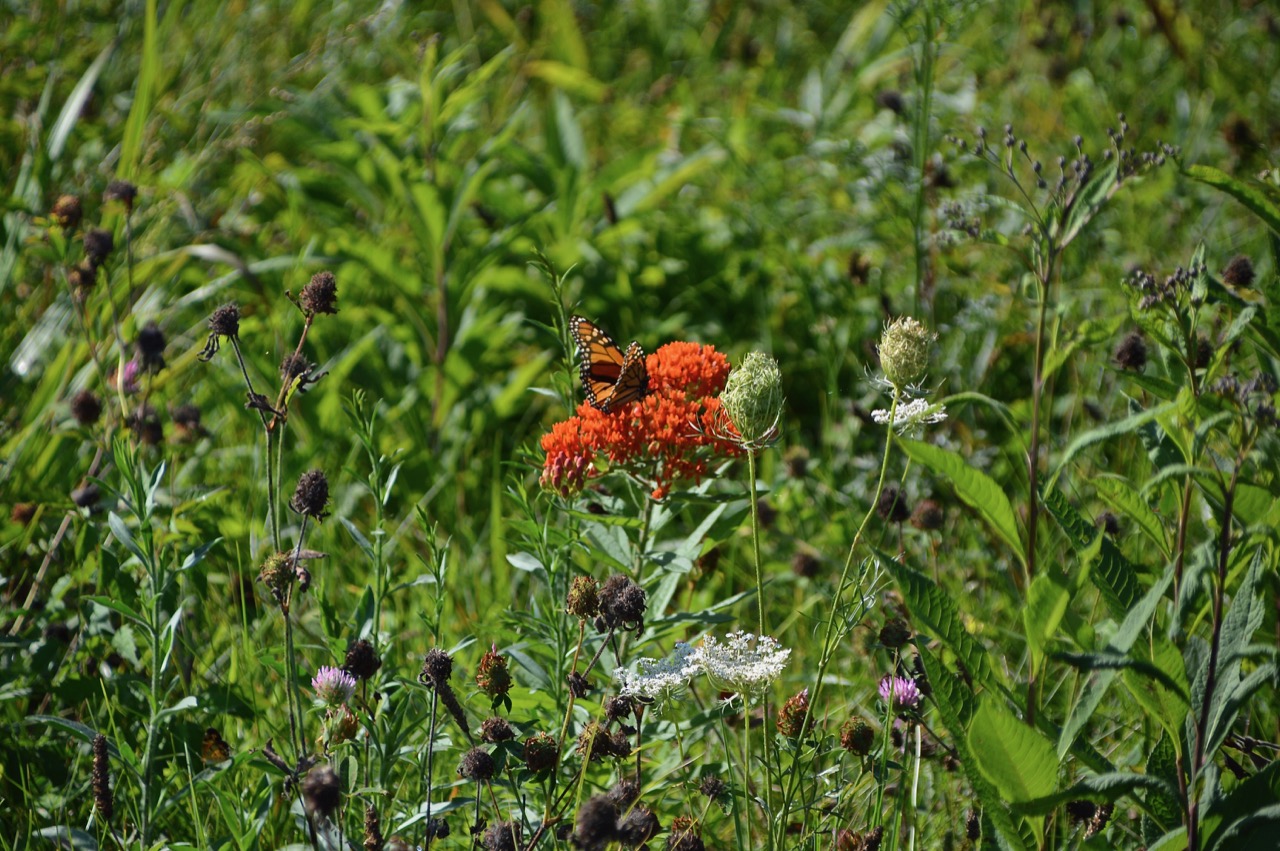 I didn't get any photos of the hounds after their lunch. What you saw yesterday is the way it is every day. None of them stay outside long and seem more interested in getting back inside to sleep than anything else.

Last week while Sadie was checking for any kind of spilled kibble around the sealed lid container, she not only moved the 25# dumbbell that holds the container in place, but dug out the old Coleman sleeping bag (for the hounds) in the closet to check under it. Then she decided if she would spread it out with her front paws it would be nice to take naps on ... just like the camping trip. She spends every afternoon on that sleeping back for her naps. 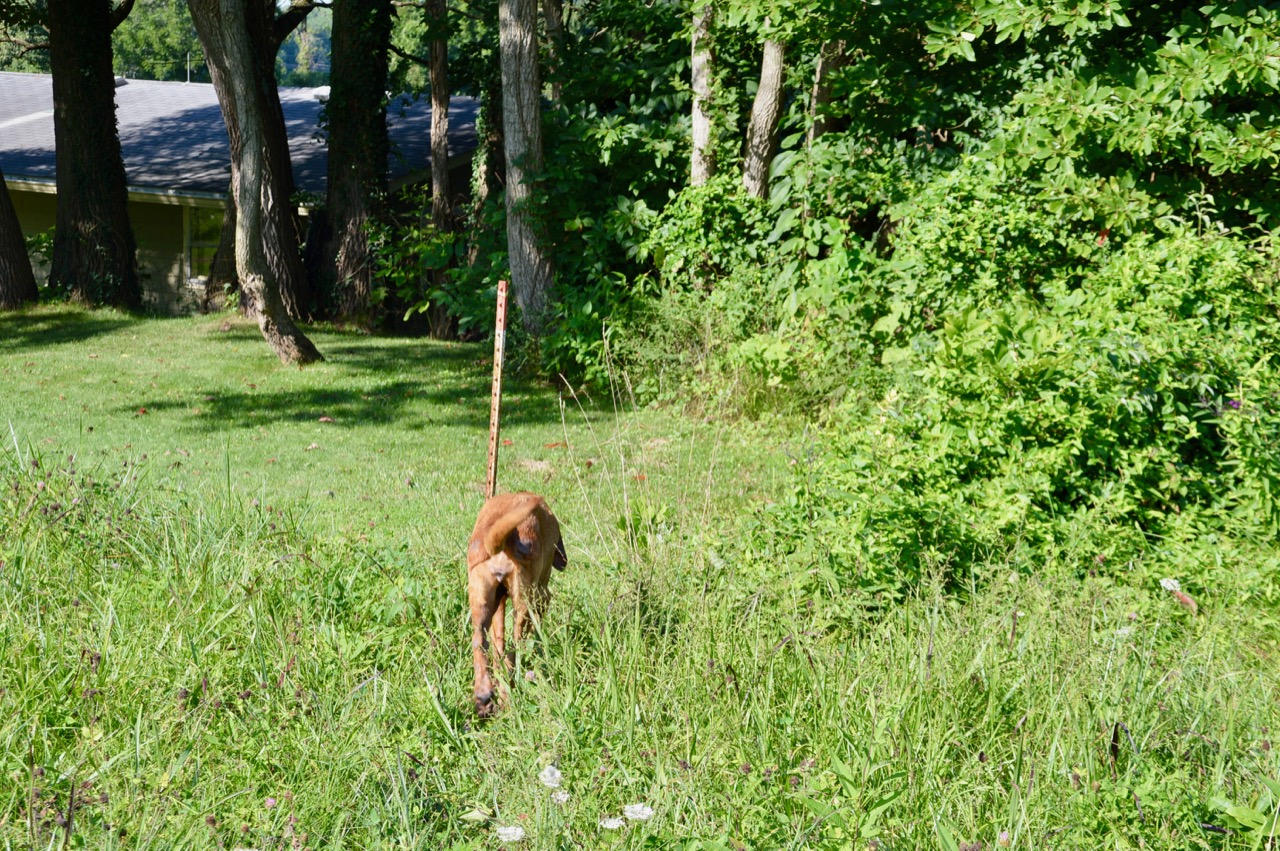 Stella had one thing on her mind this morning when walking ... getting into the shaded backyard as soon as possible. It's rare that she is the first one back to the yard, but today was one of those times. 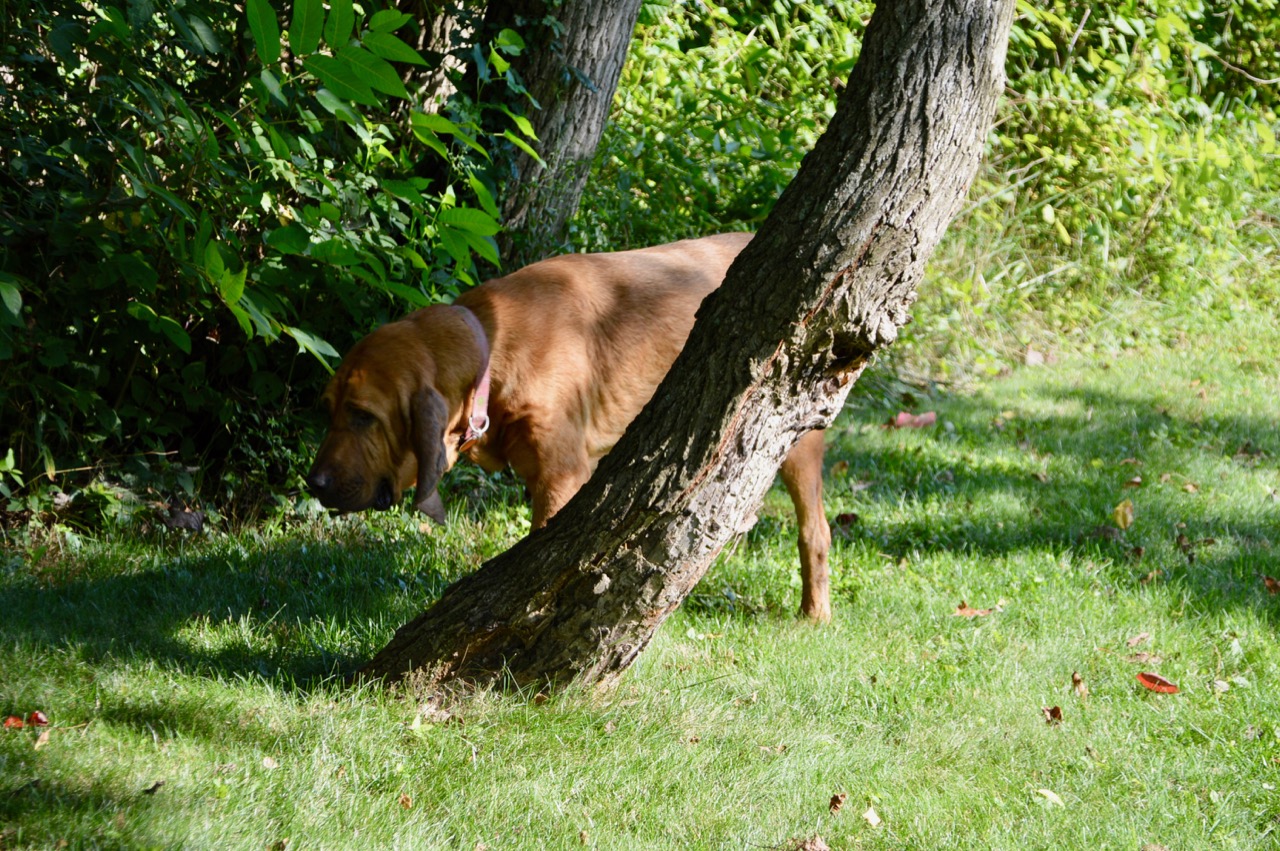 I have to admit that shade this morning felt pretty good. It was at least 10°-15° cooler than the field. She still walked without stopping all the way to the carport/kitchen door to be let back inside. 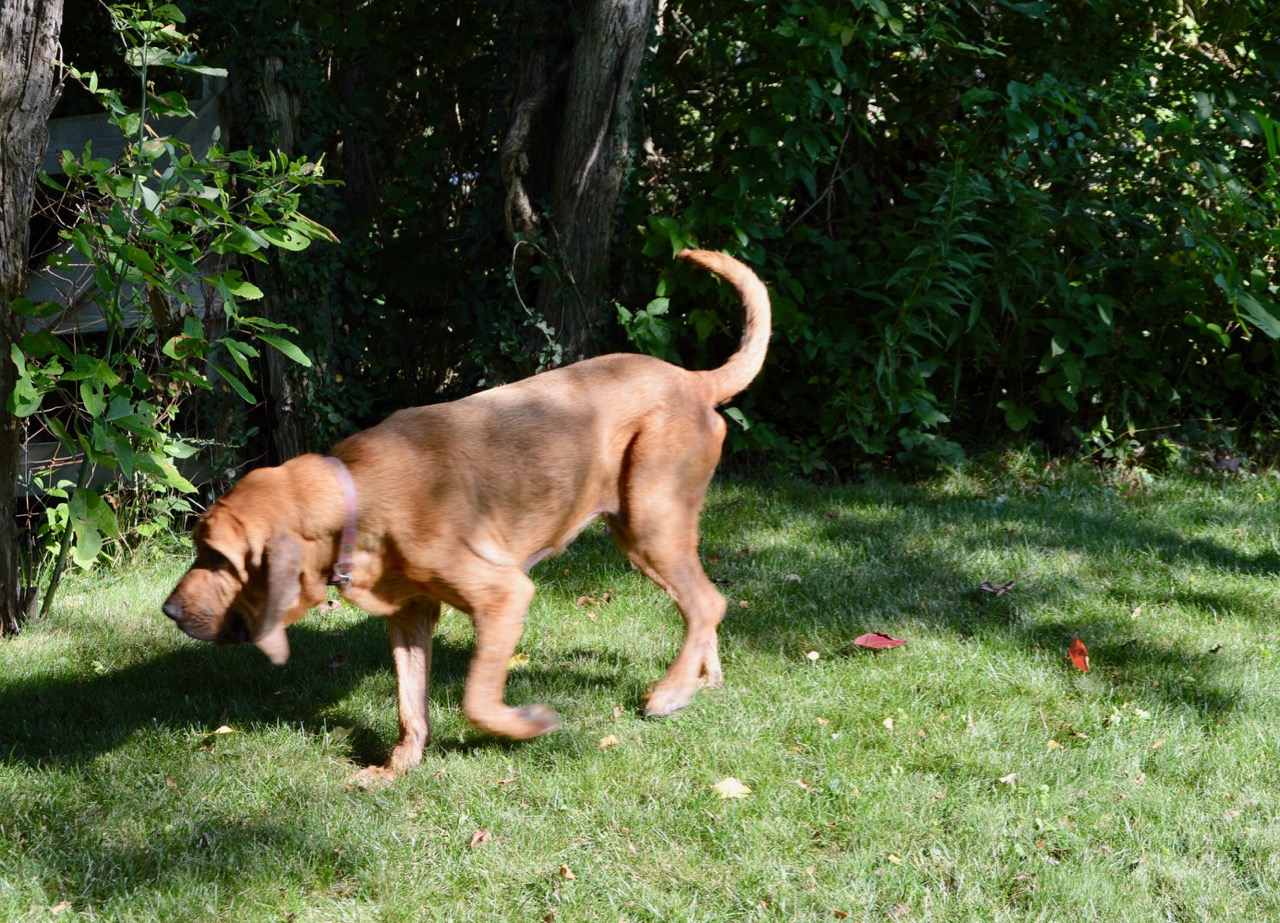 With it being a 'low' pollen count today, she did not stop to scratch herself in the shade nor did she scratch herself inside ... she laid down and went to sleep, which is her second favorite activity right behind eating food. 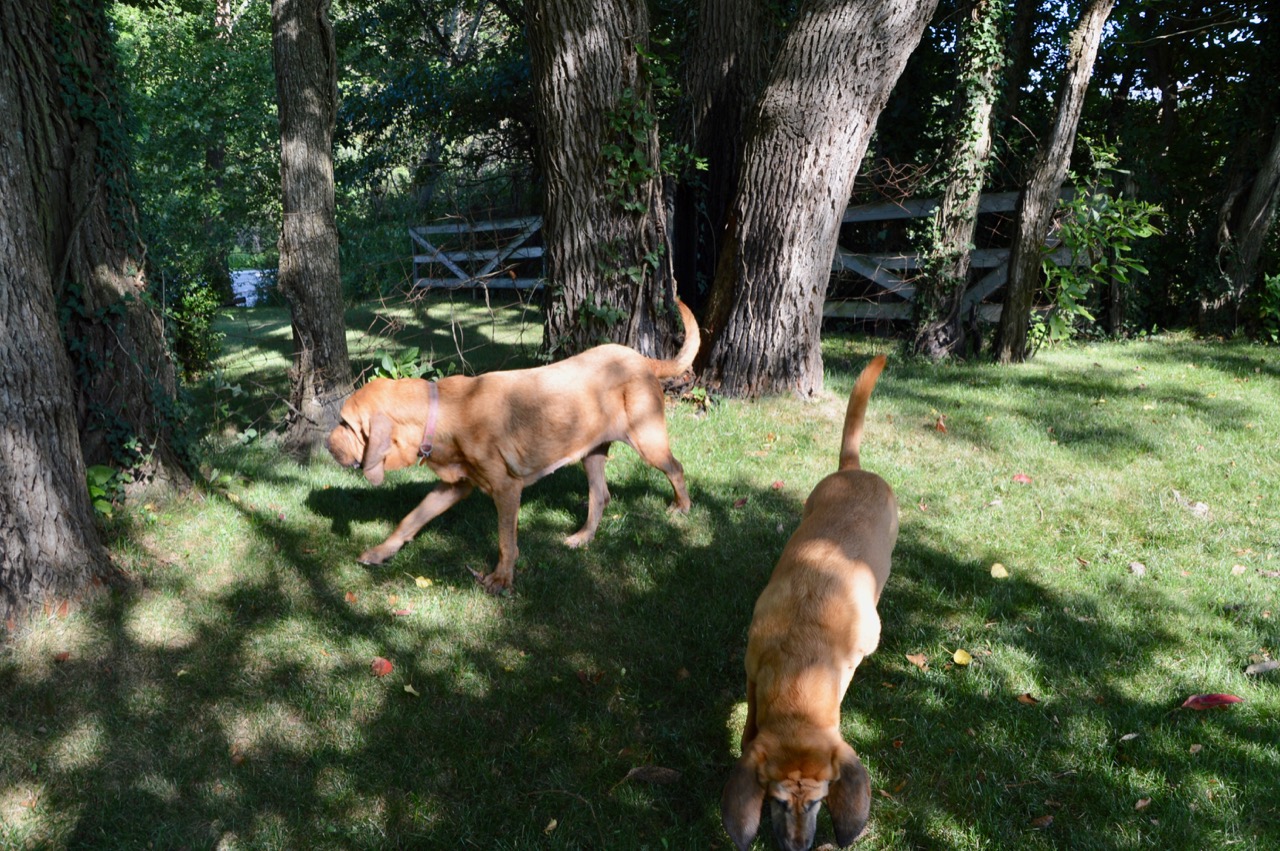 I almost forgot ... how hard it was to air the tires up. It wasn't or isn't the process of airing them up. It was finding the air pumps to do it. In this small town three mini mart/gas stations have air pumps. One of those accepts debit cards, which is what I live on. I rarely have cash let alone quarters. Well the first pump I went to did not have a sign on it telling me that debit cards were not working. I won't tell you how many times I swiped my card, then slide the car into the slot before figuring out it wasn't working. I also won't tell you the words I was mumbling to myself during that time.

I go to store #2. At least it has a large page sign on the machine telling me it was "Out of Order". I was down to one last chance, otherwise I was on a 25 mile round trip drive just to put air into some tires that were low and needed air as soon as possible. Of course that machine only took quarters. Unlike last time, last year, their ATM machine was working this time so I could at least get some cash without driving around town looking for an ATM machine that worked.

I was successful getting the tires aired up. I passed on their candy, fresh oatmeal cookies and they didn't have Ben&Jerry's ice cream in their (minimart) freezer ... so I got out of the store with 6 quarters for the air pump, some dollar bills for my next trash run and a ten dollar bill for my next fast food run.

All in all, it was a nice day in 'the tropics' of southern Indiana today.
By Steve at 12:06 PM