A Cool And Drizzly Day 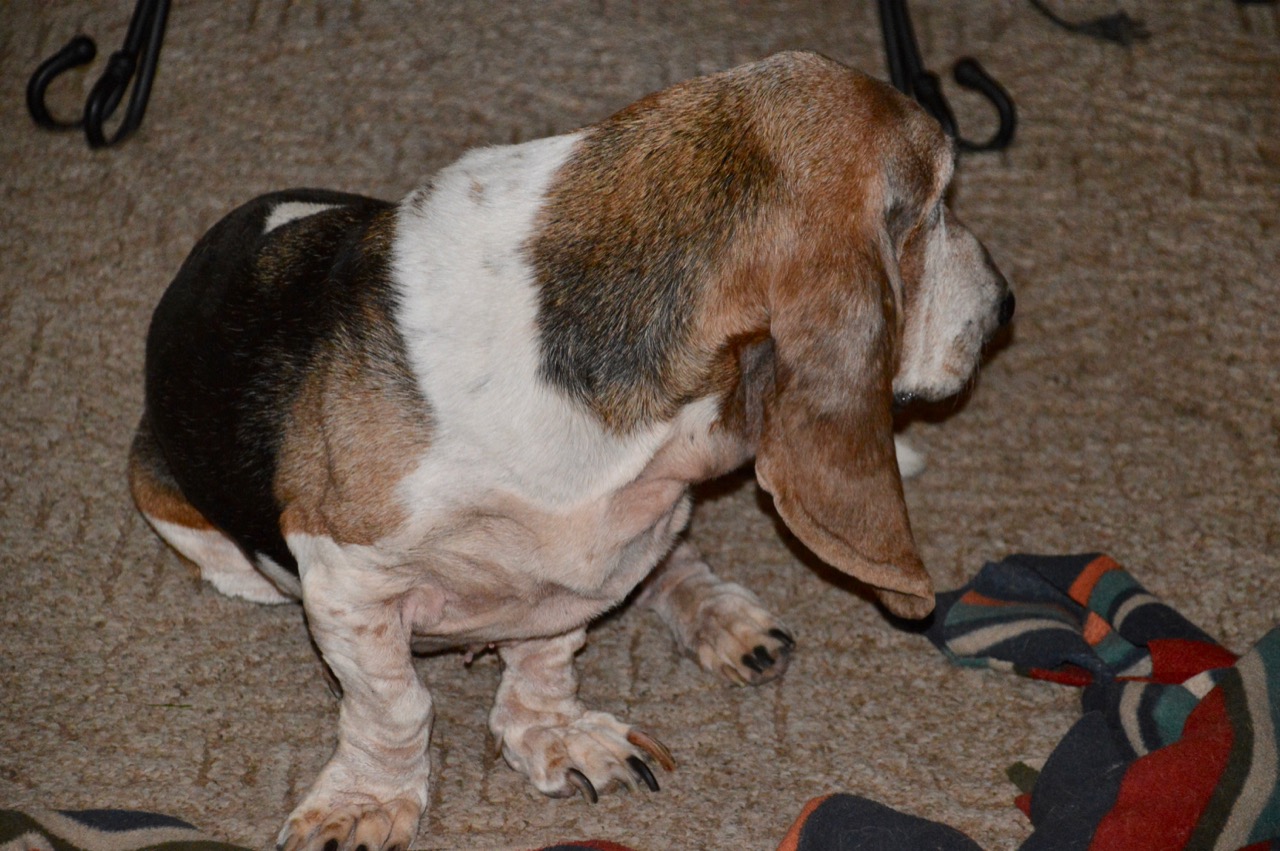 Heidi may have been feeling better this morning but that doesn't mean she wanted her photo taken. She had just moved from the dog bed in the bedroom out to the living room to join Stella and I about the time I was getting ready to take the morning walk. More rain was predicted within the next hour right after I published this morning's blog post. 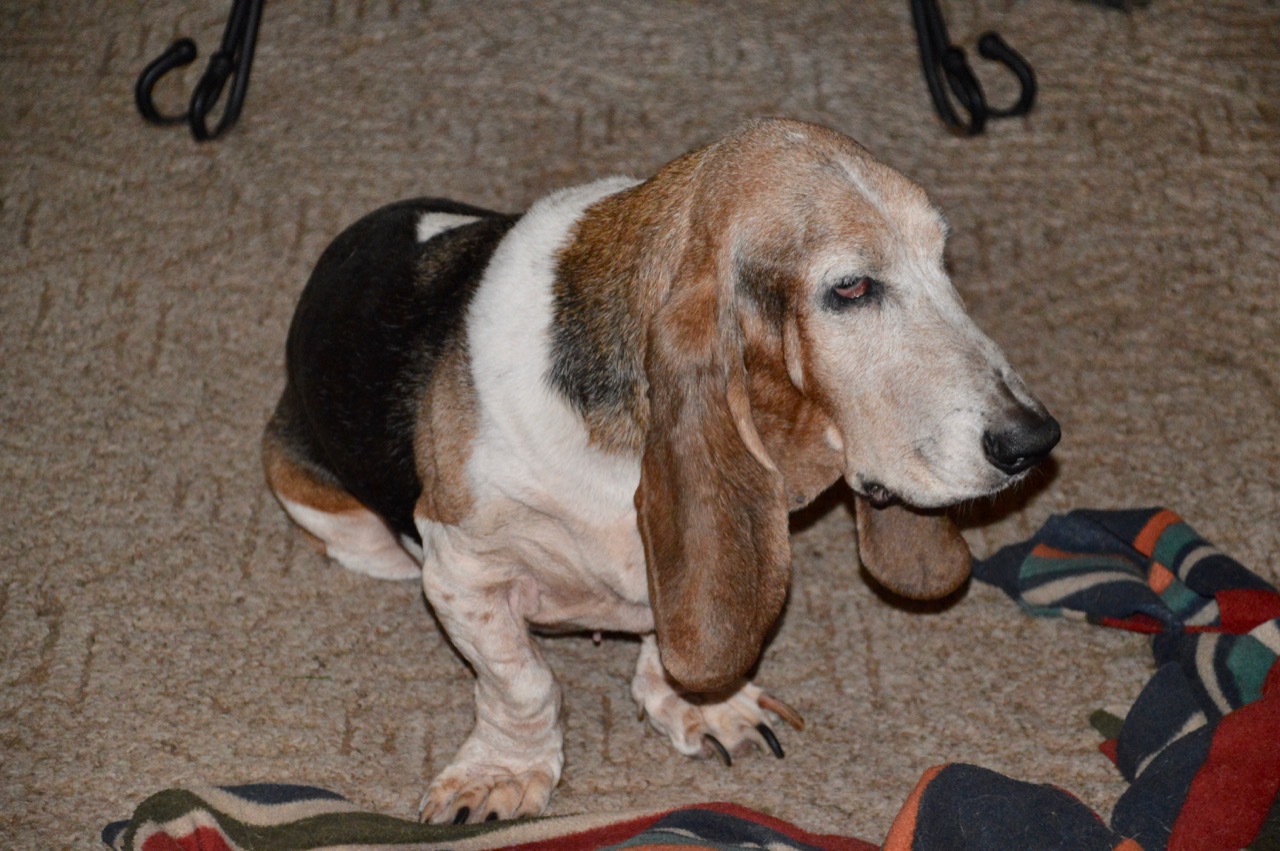 She had no problems eating her morning kibble, even with missing teeth. Of course most of those small bits of kibble are swallowed whole, just some of them are chewed. Either way, after having to skip two meals due to surgery yesterday she was very hungry this morning and told me loud and clear she was hungry as did Stella. 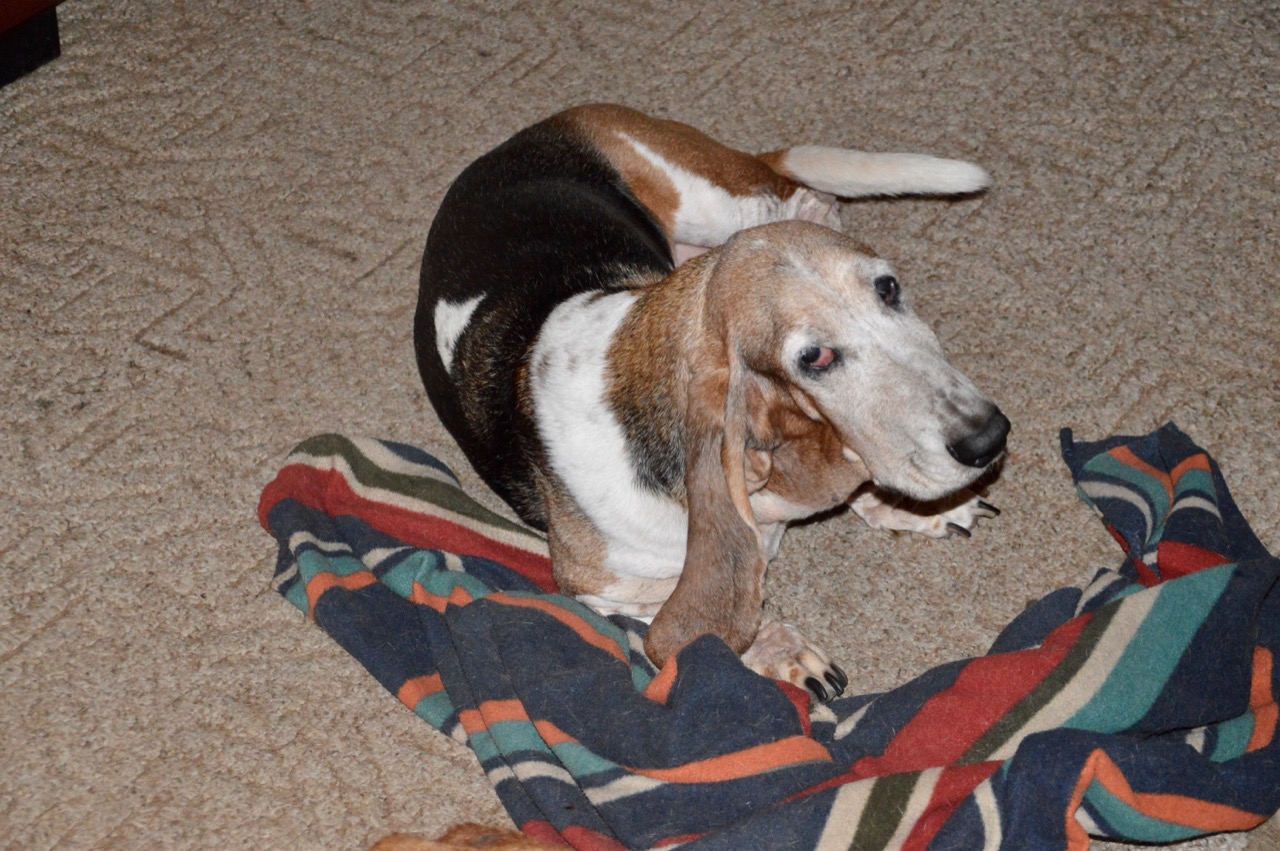 This is one of two blankets scattered on the living room floor. Just yesterday afternoon I had folded them into nice shaped beds only to see her scratch and paw them into the perfect sleeping position. 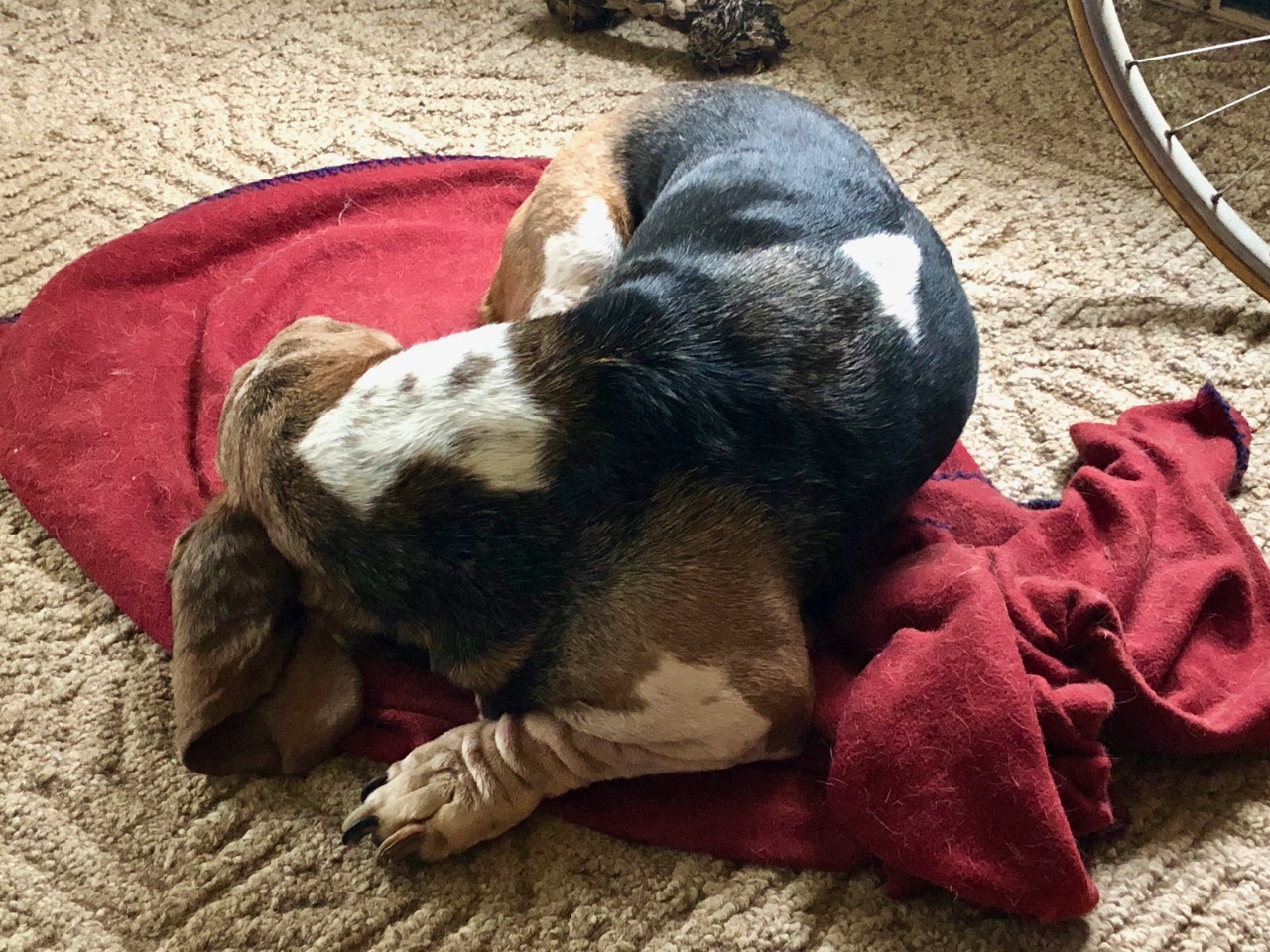 When Stella and I returned from our short 14 minute walk ... Heidi had moved to blanket #2 and was in the deep sleep mode until lunch was served. 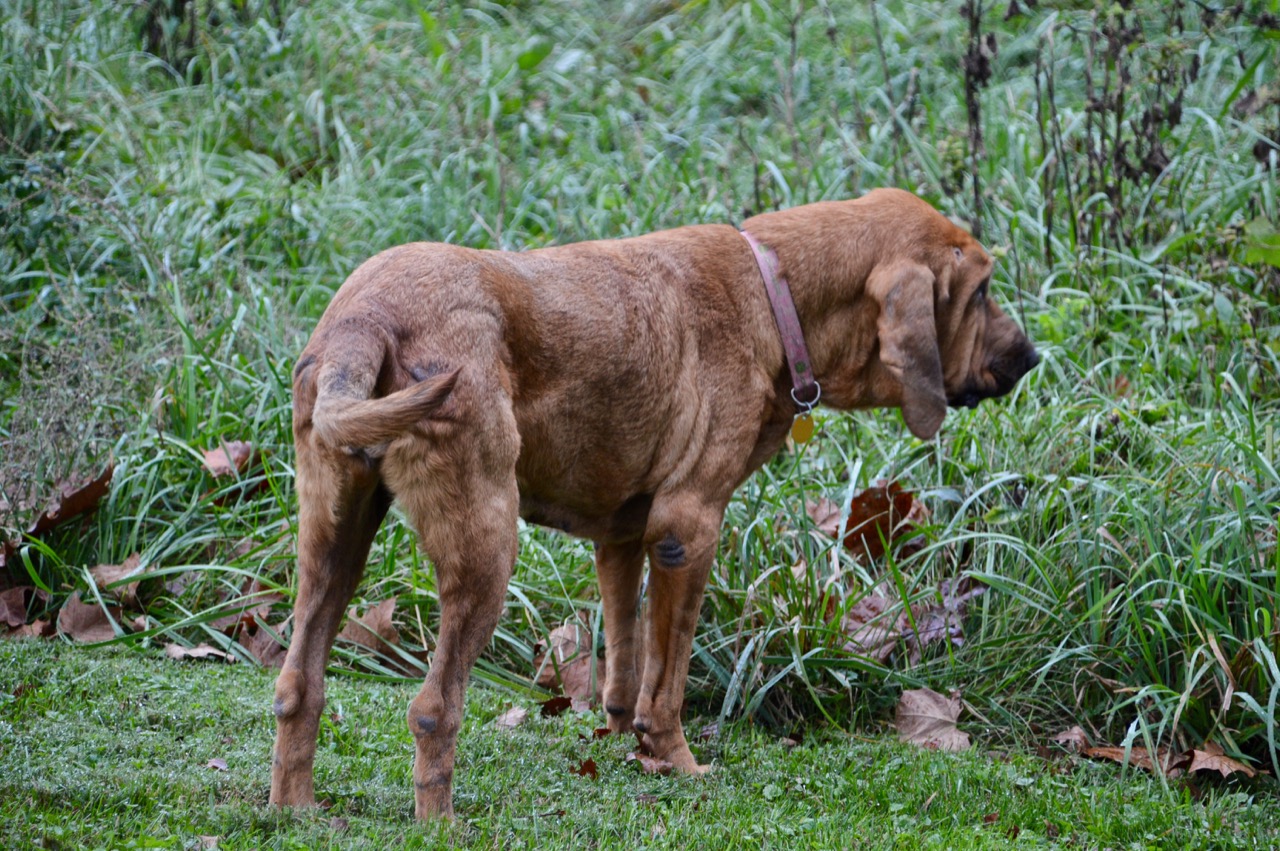 The first sign of rain were drops on the six red blocks we call "Winston's Patio". He would spend a lot of time laying on those blocks enjoying the warm sun, the scenery and thinking about everything during that day. I could barely hear rain drops but didn't see new ones on my arm nor the camera ... we decided the walk would go for as long as it didn't start raining. 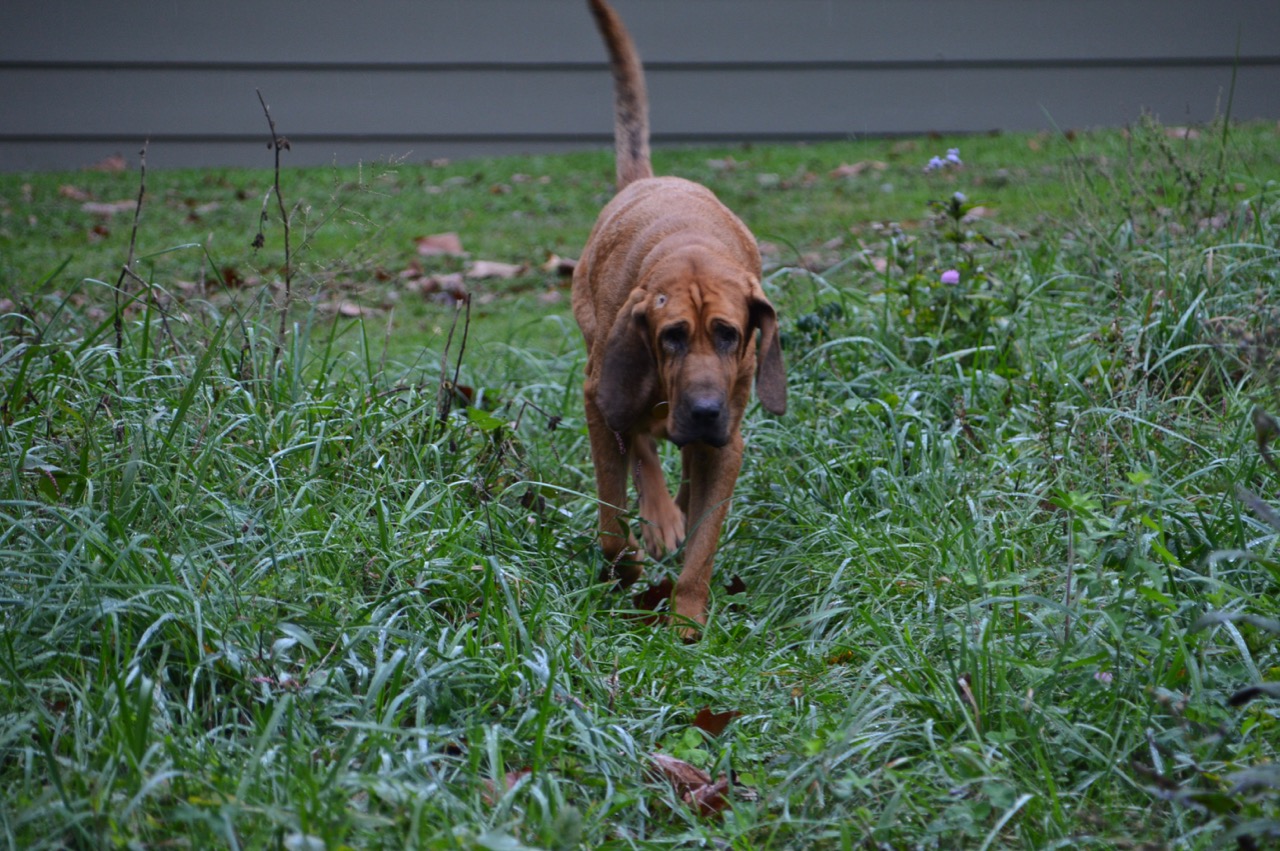 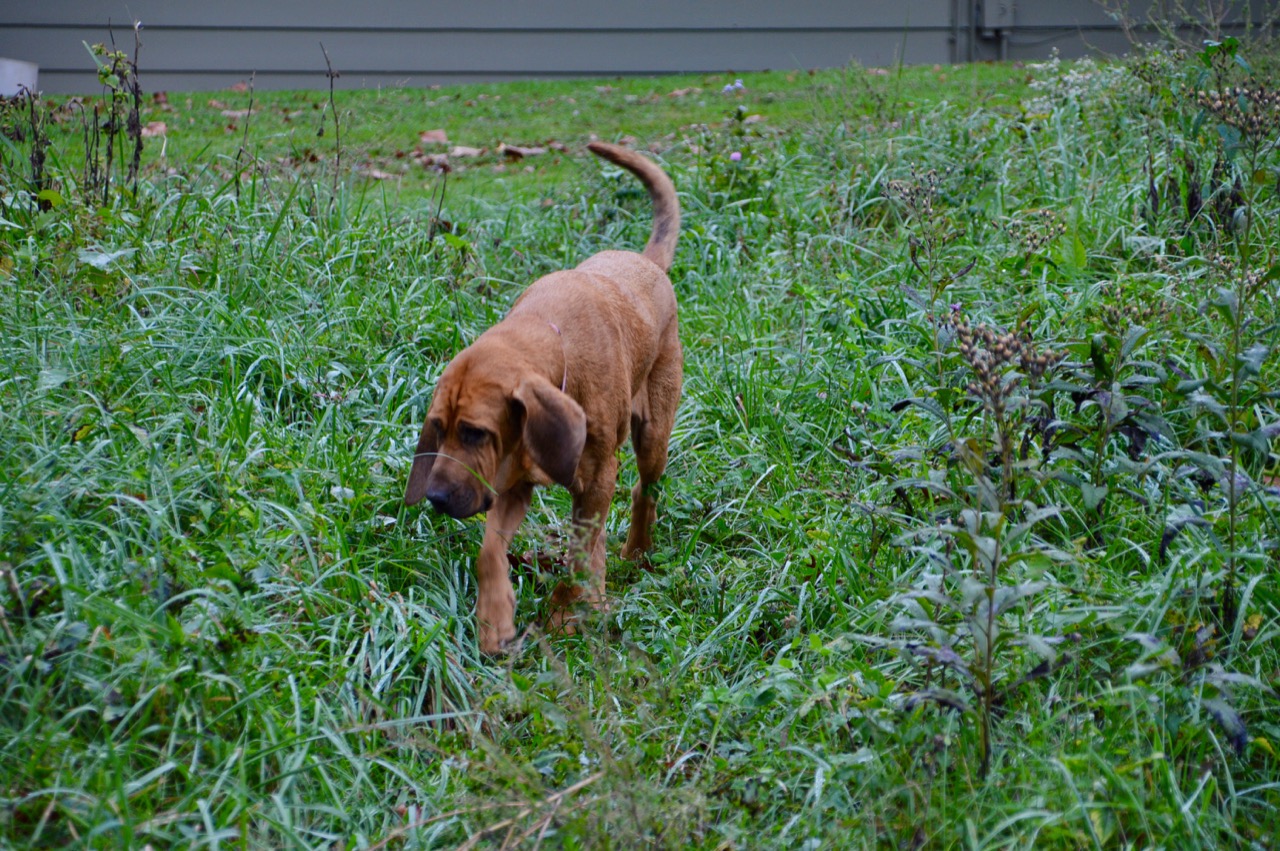 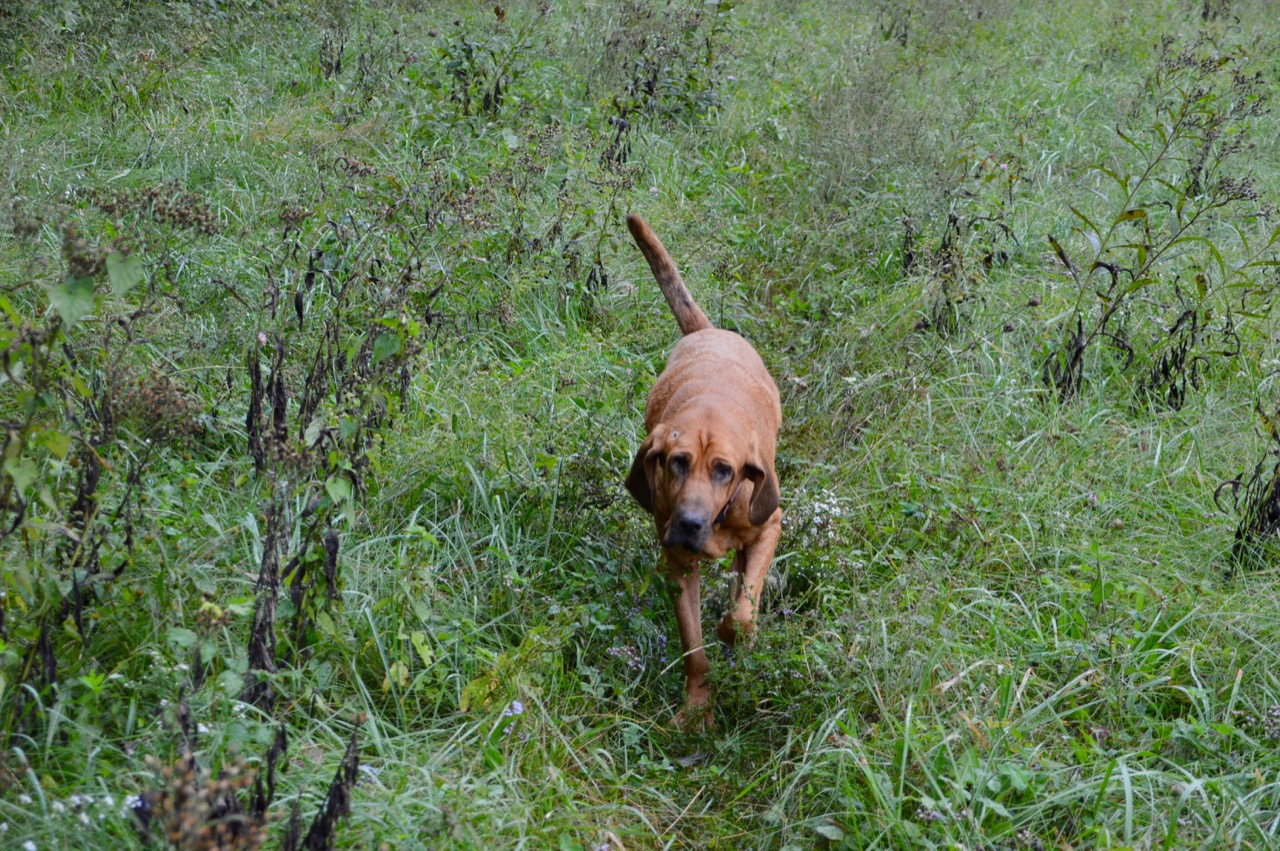 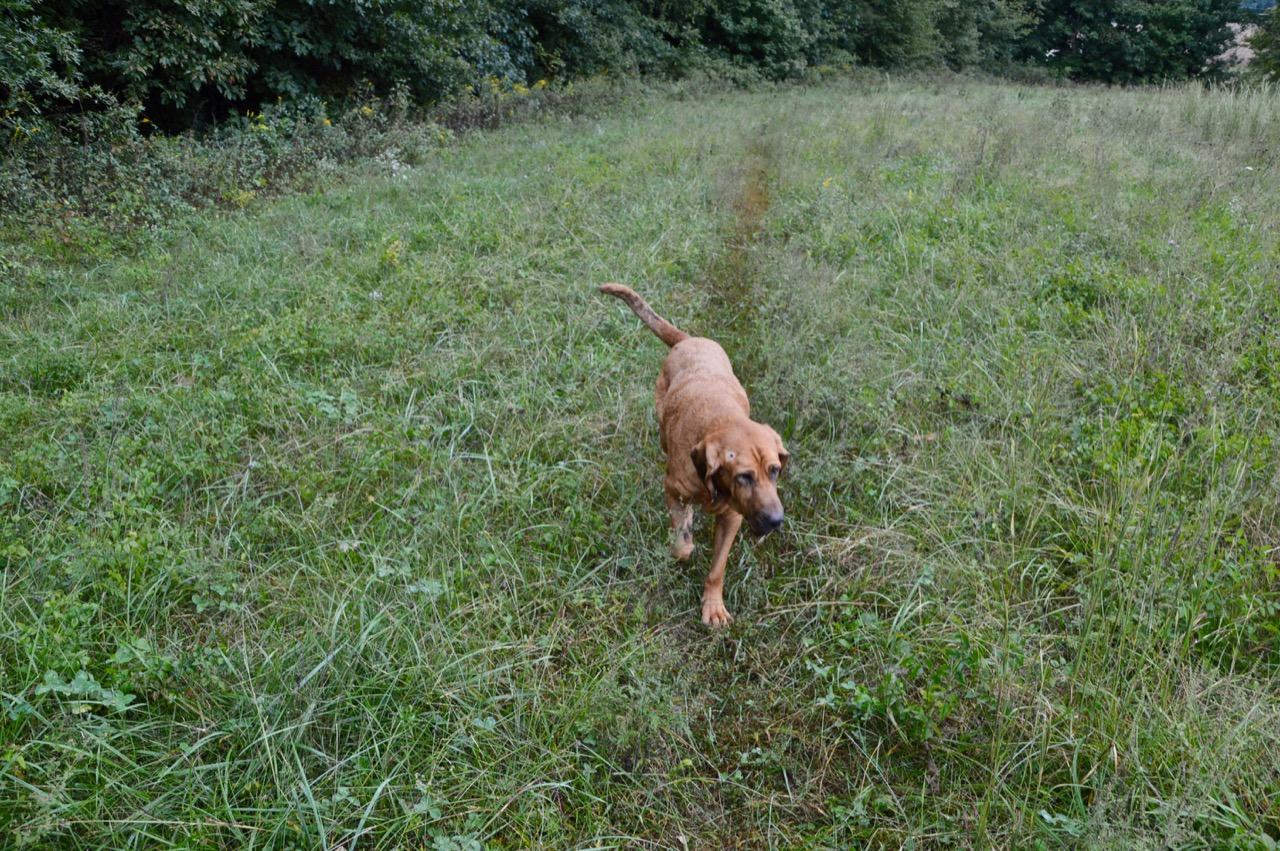 Rarely did she move off the path. 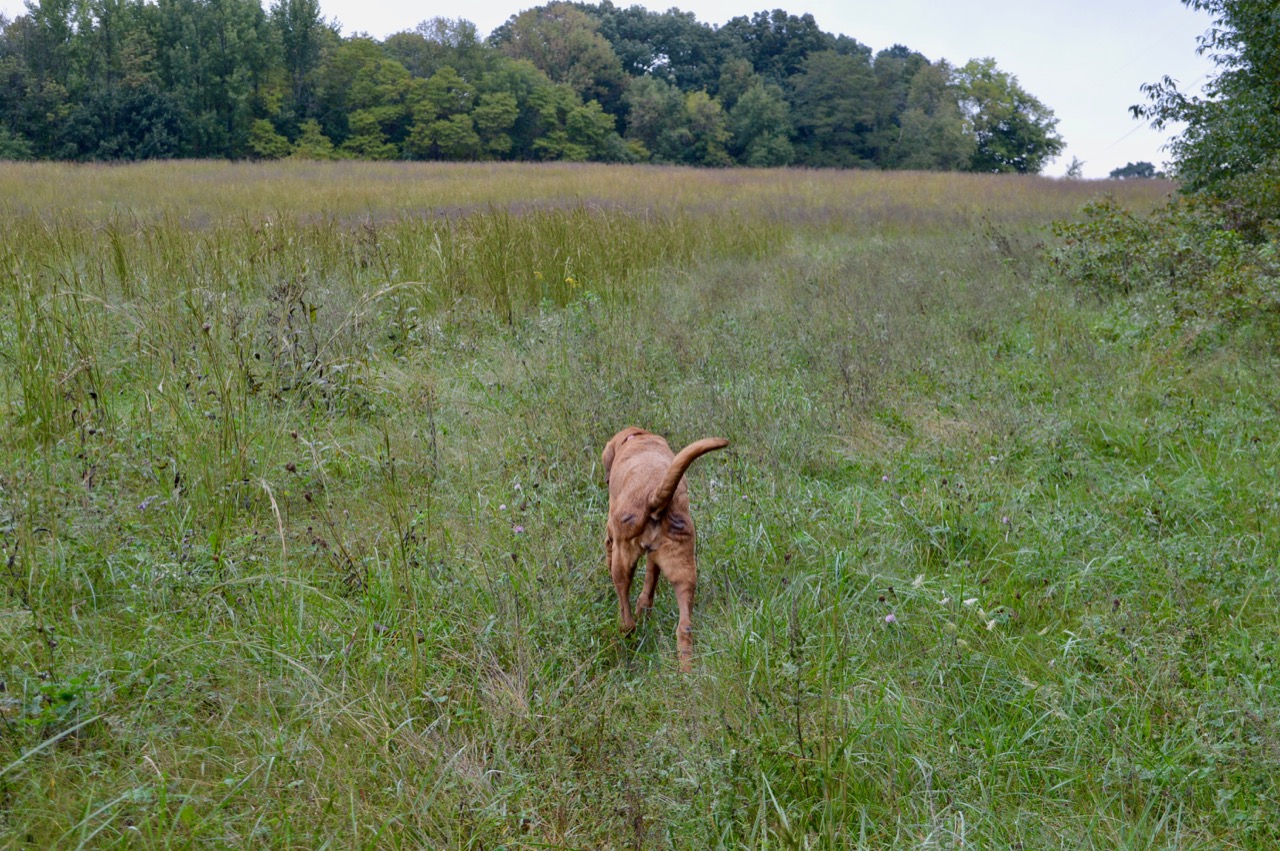 In a lot of the field we cannot see our worn path as we have in past summers or falls but she will follow the path catching every slight step around a flower or weed. 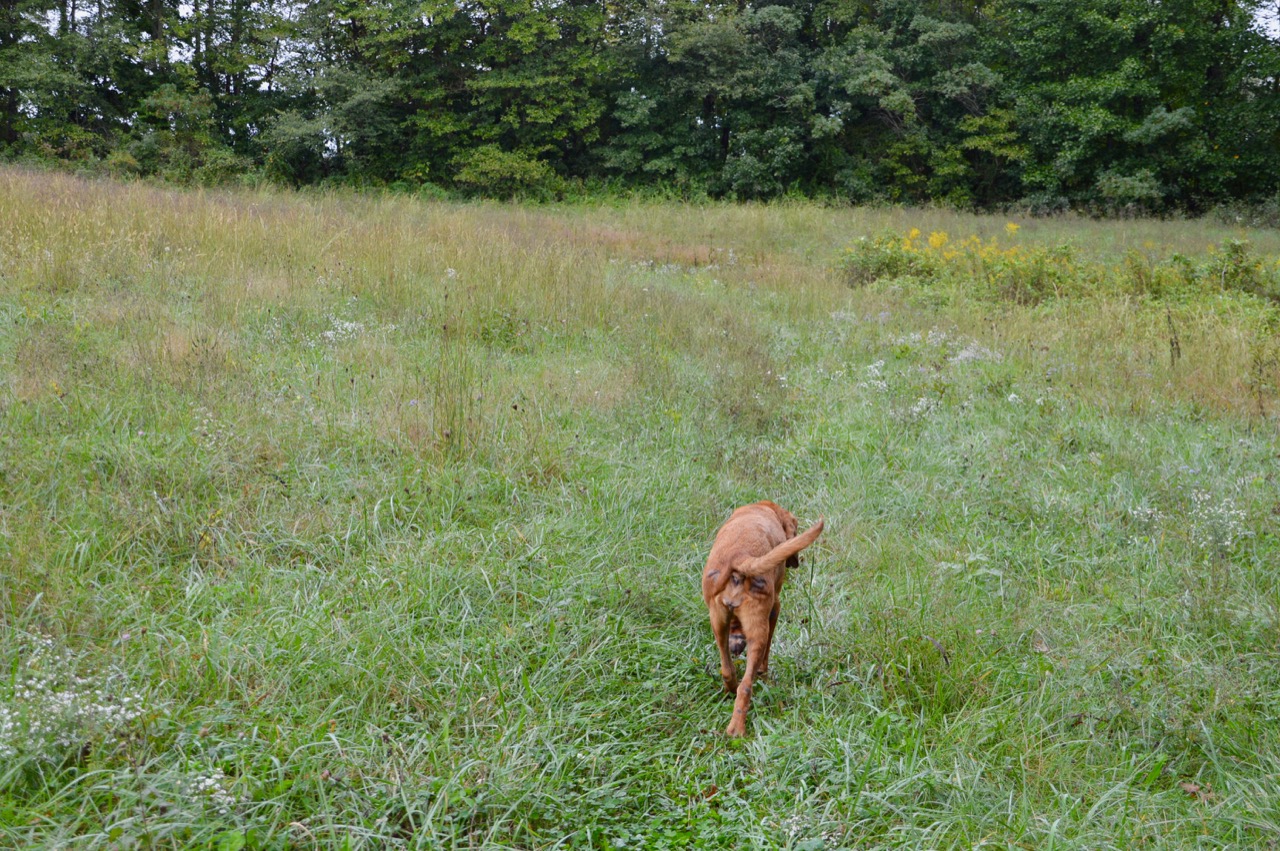 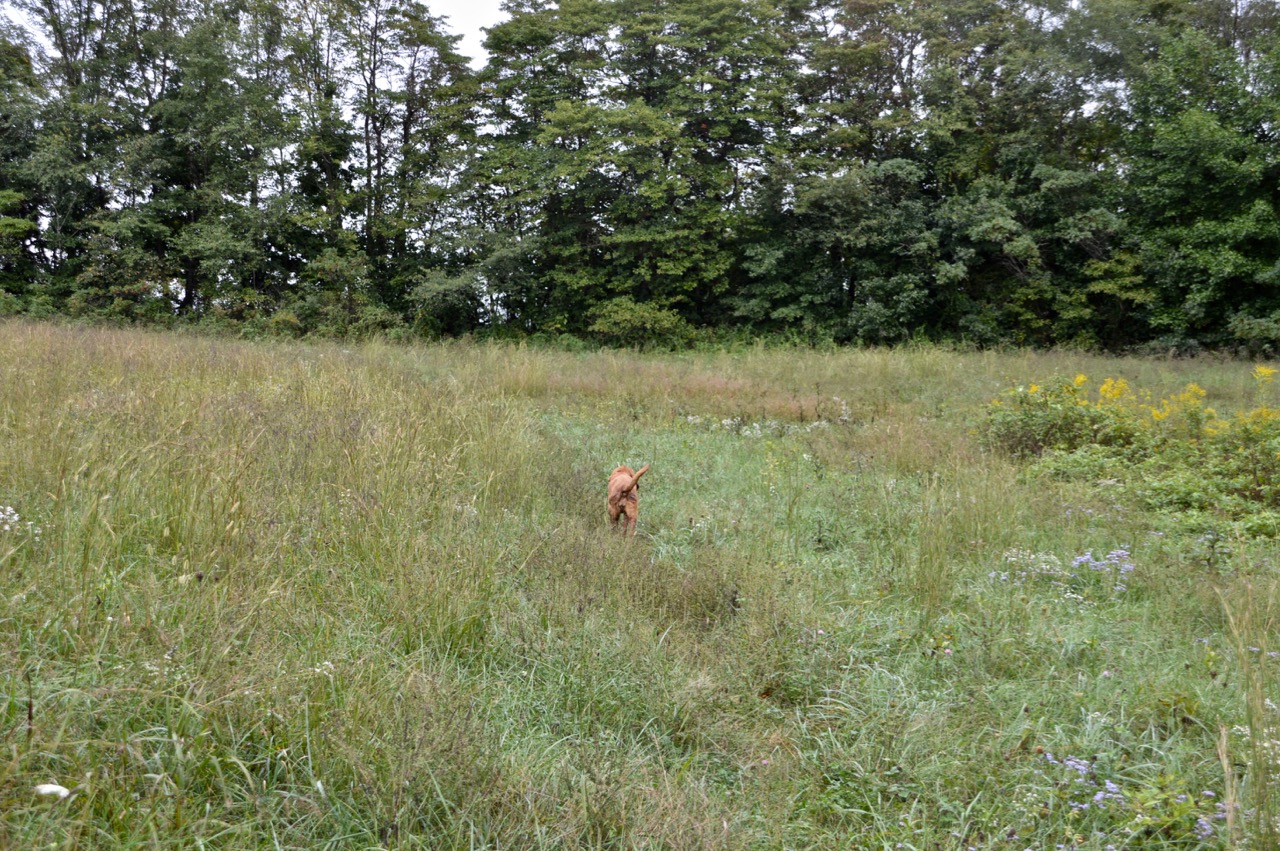 Most of the time she will walk without stopping, even stepping on your foot as she walks around you ... IF, you are in her way. 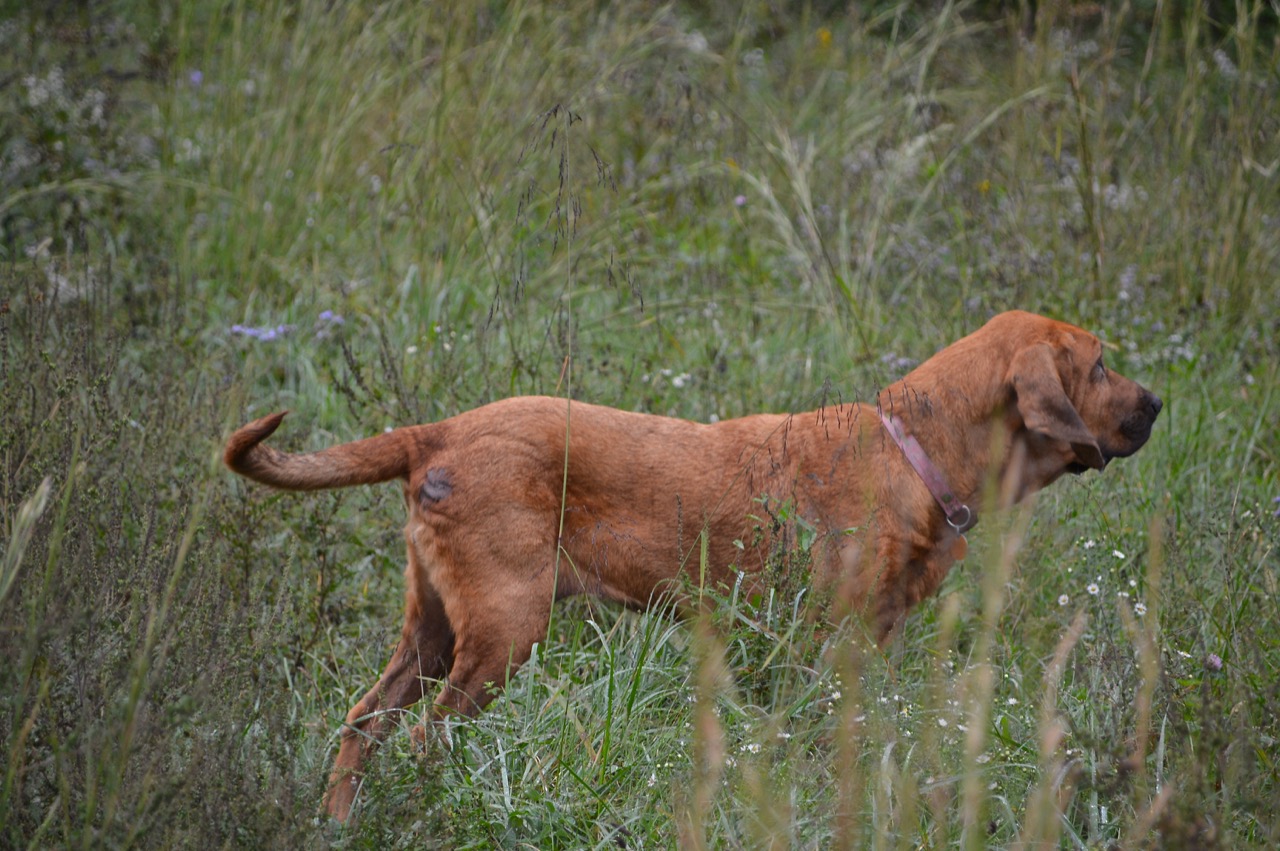 This is her idea of tracking ... entirely different from Sadie. 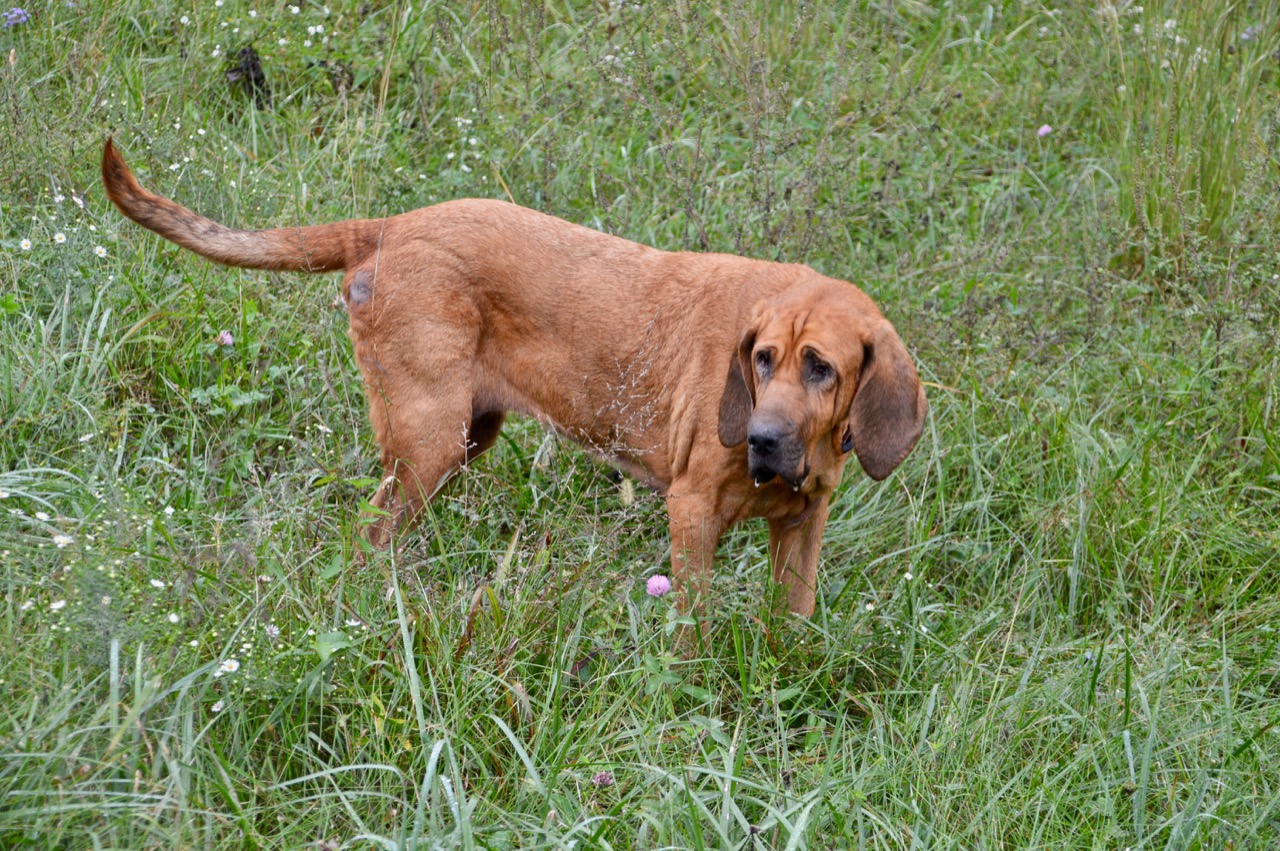 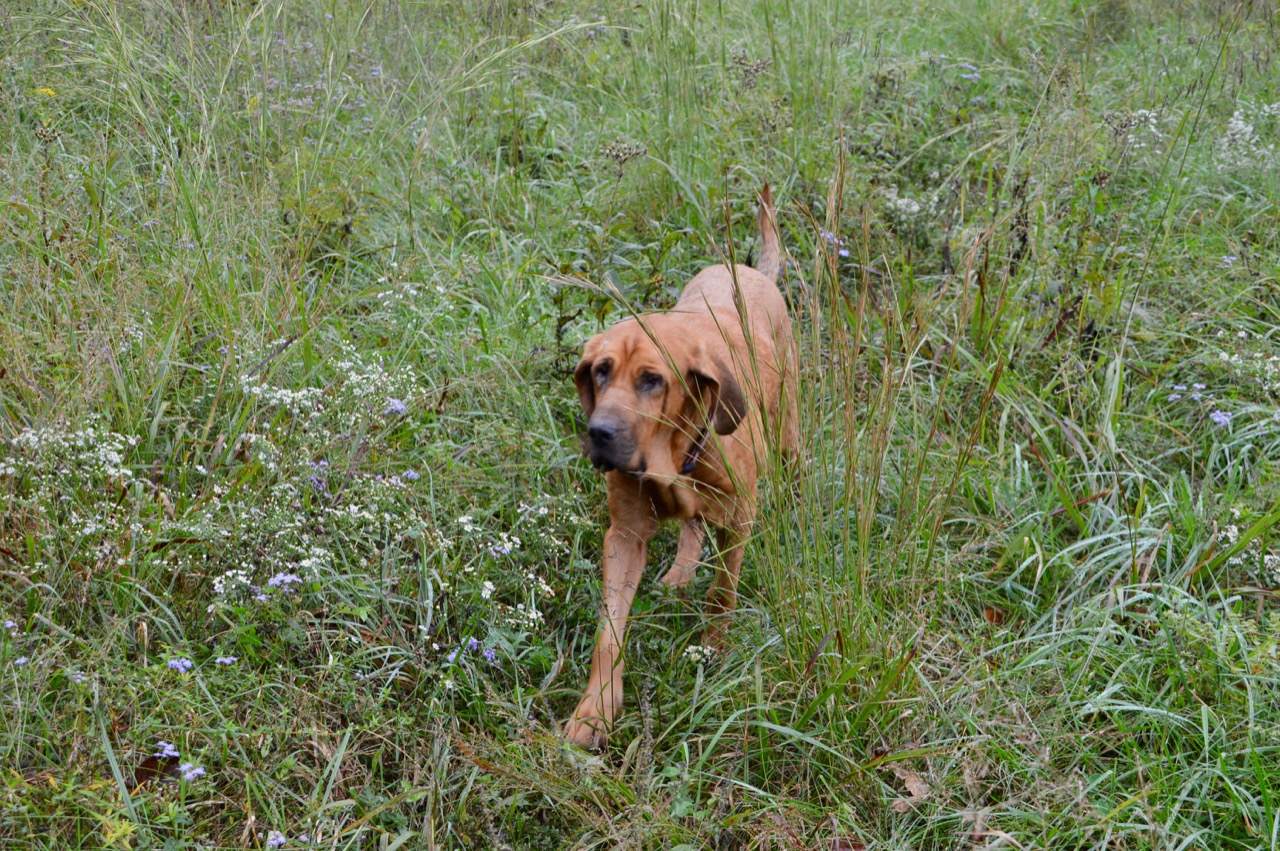 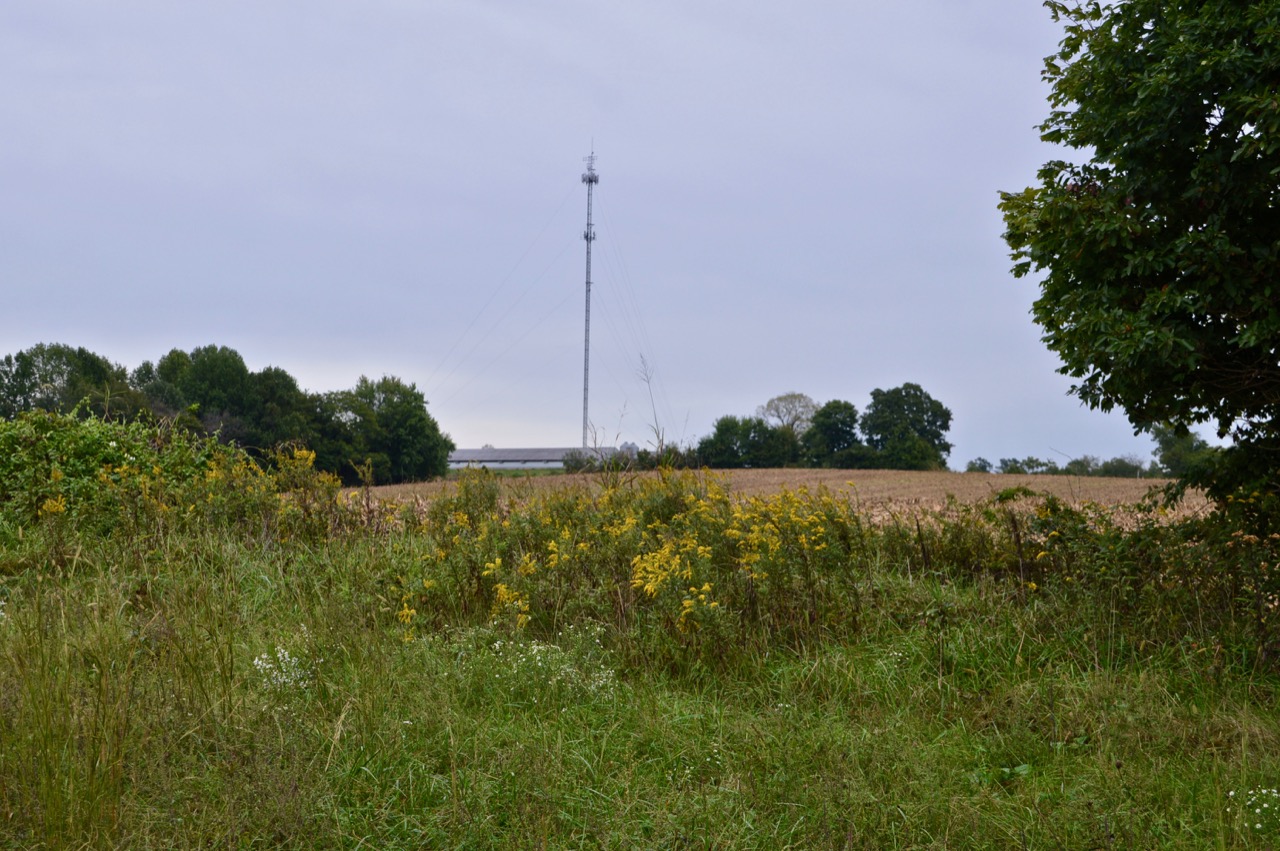 The neighbor behind us picked his corn last week without telling us nor making a sound. I heard nothing while the field was cleared last week. 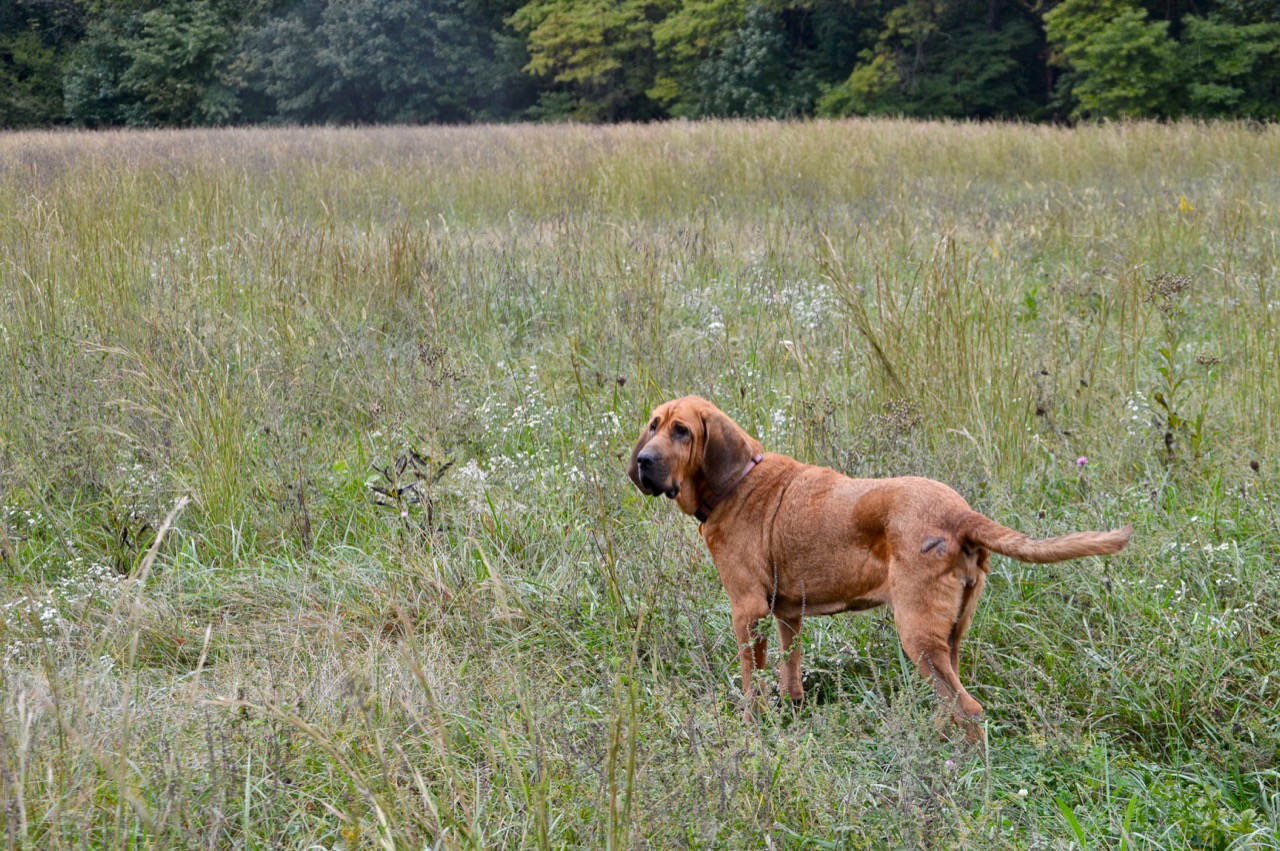 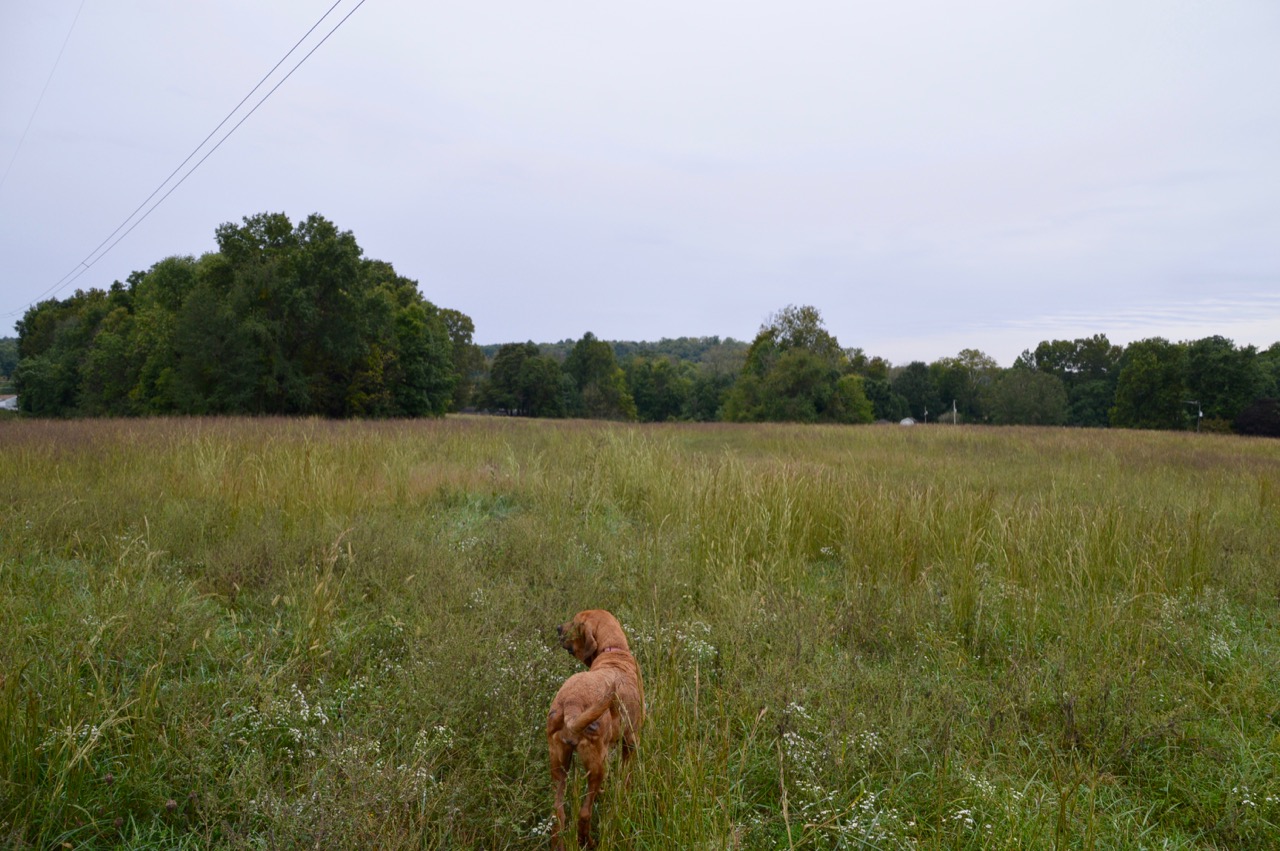 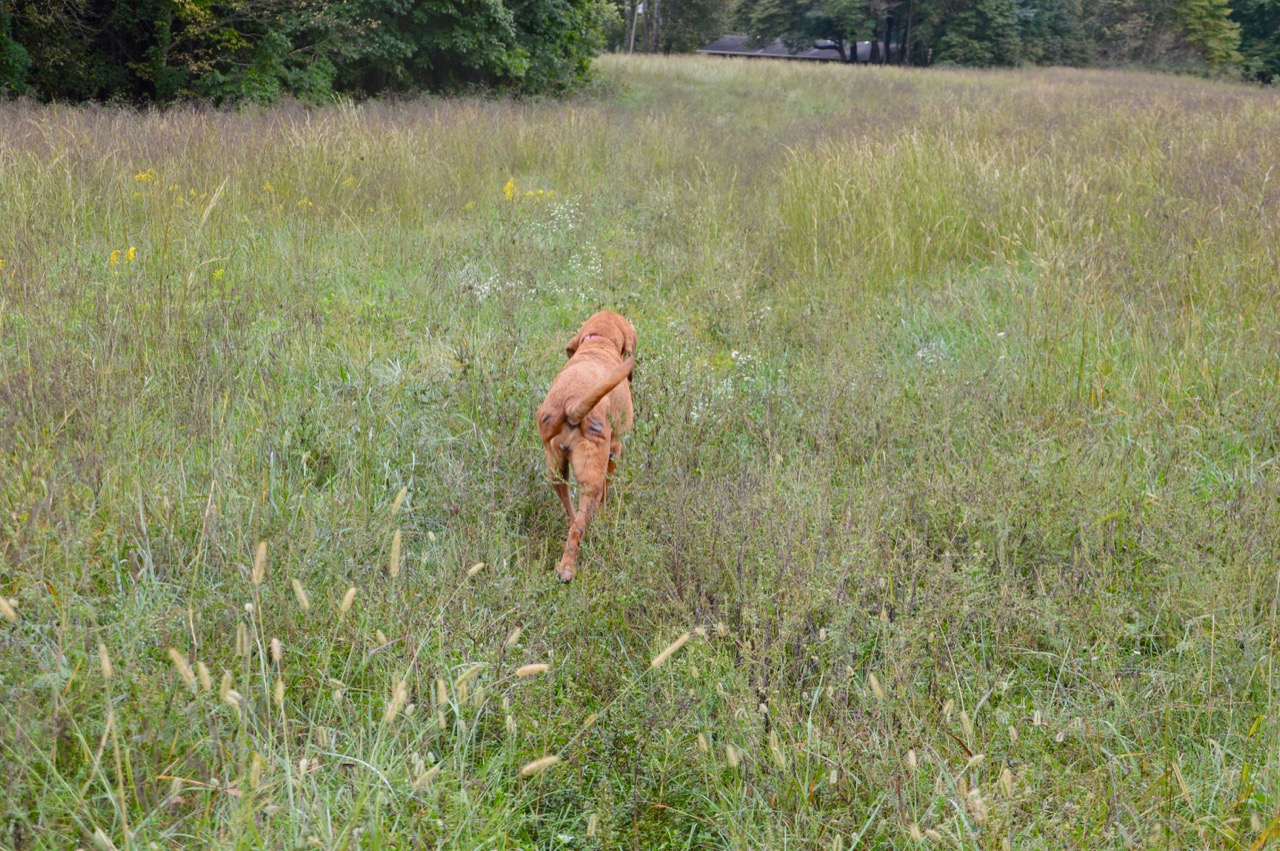 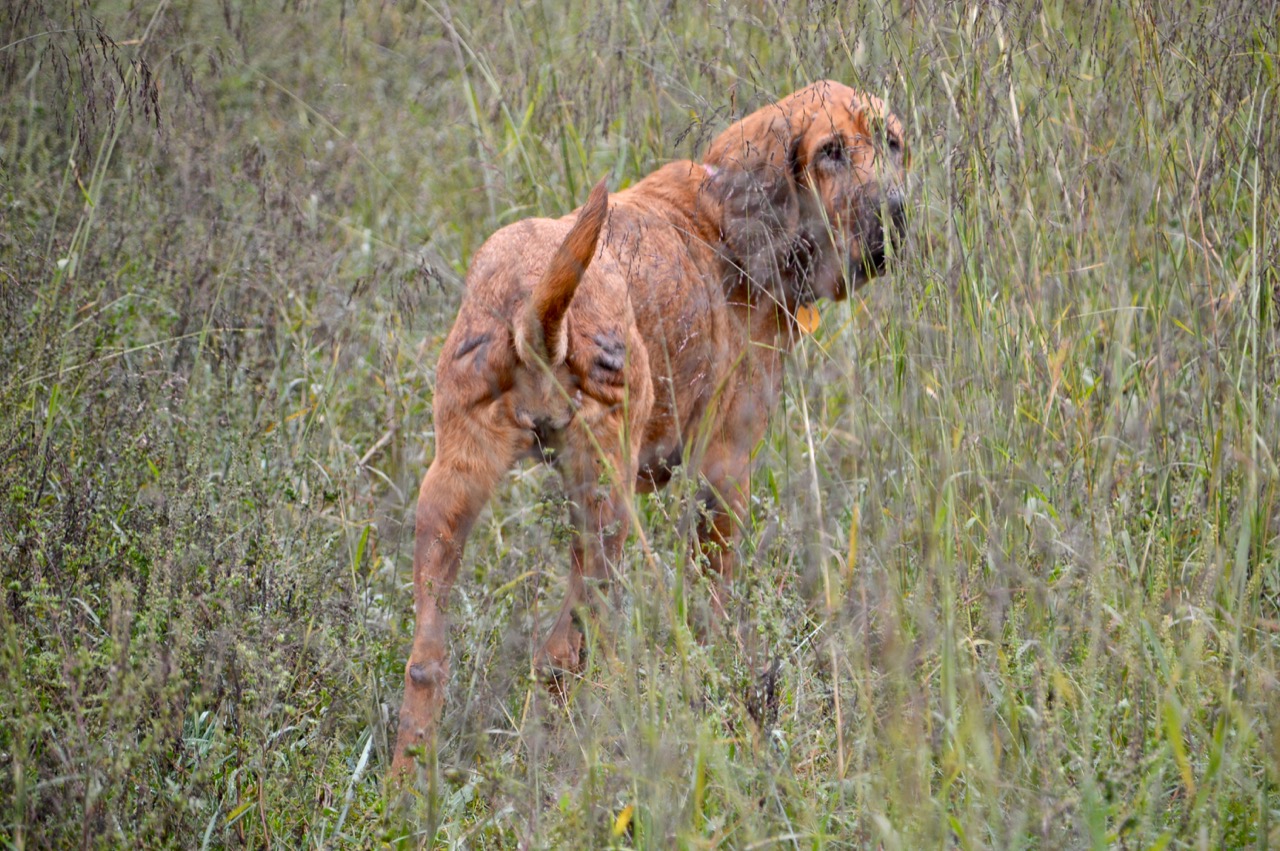 For once she is looking around at me to see if I am coming or not. I think these pictures show just how slow she moves. 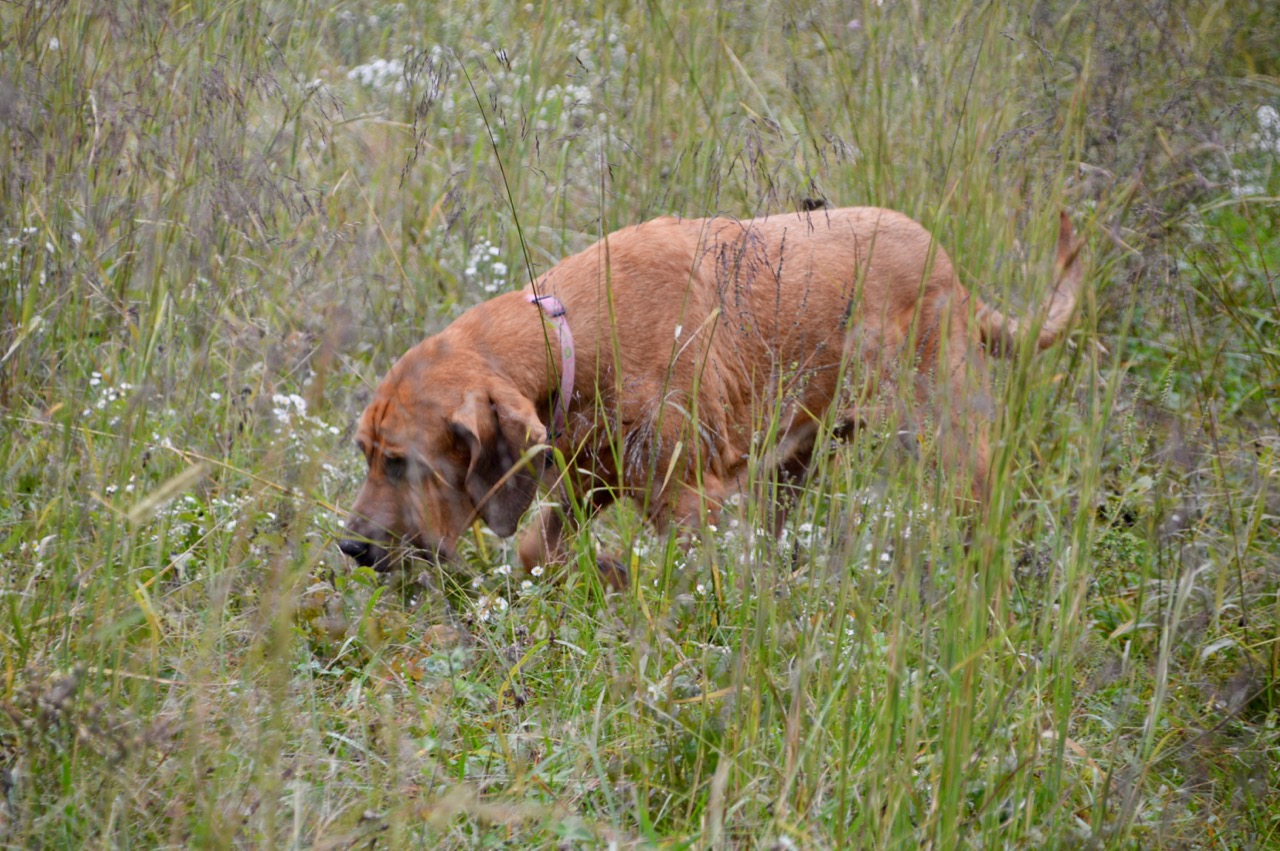 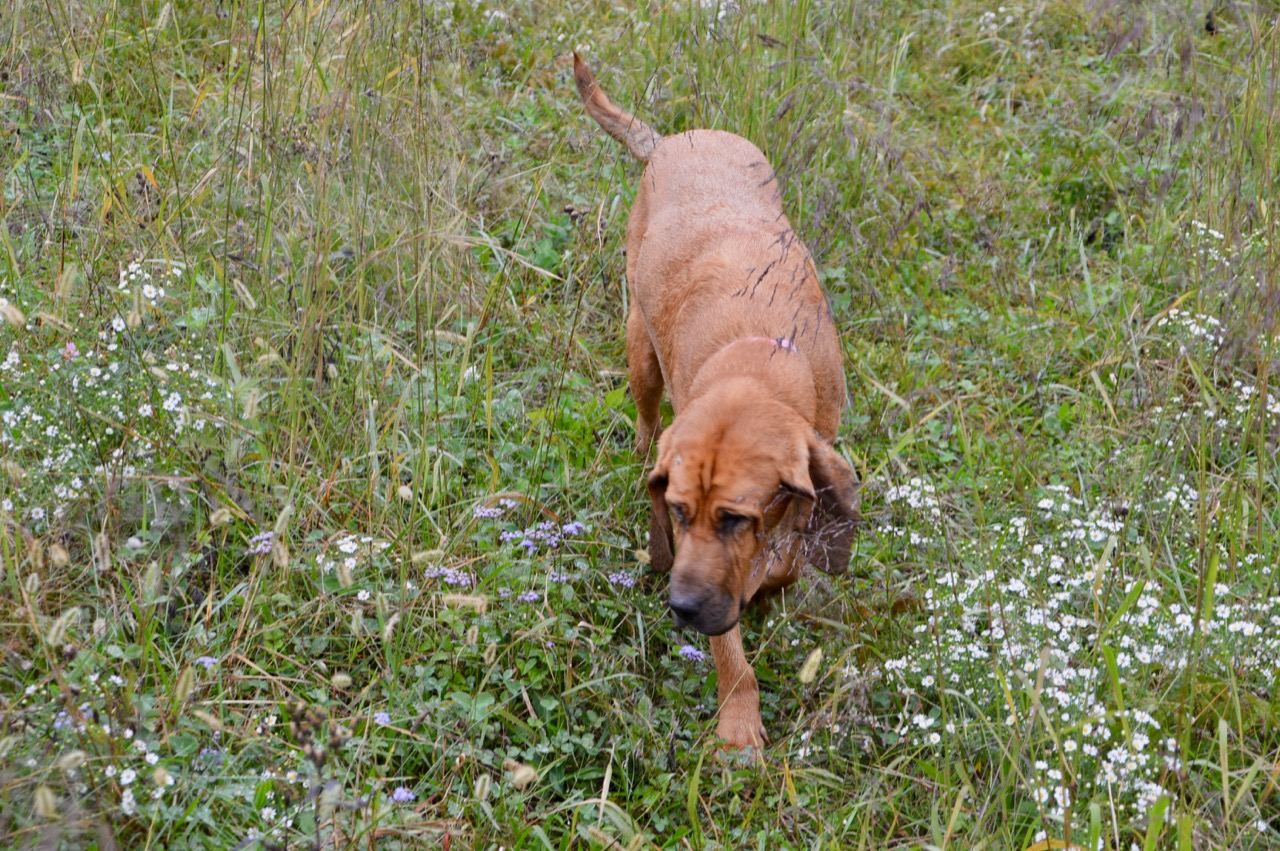 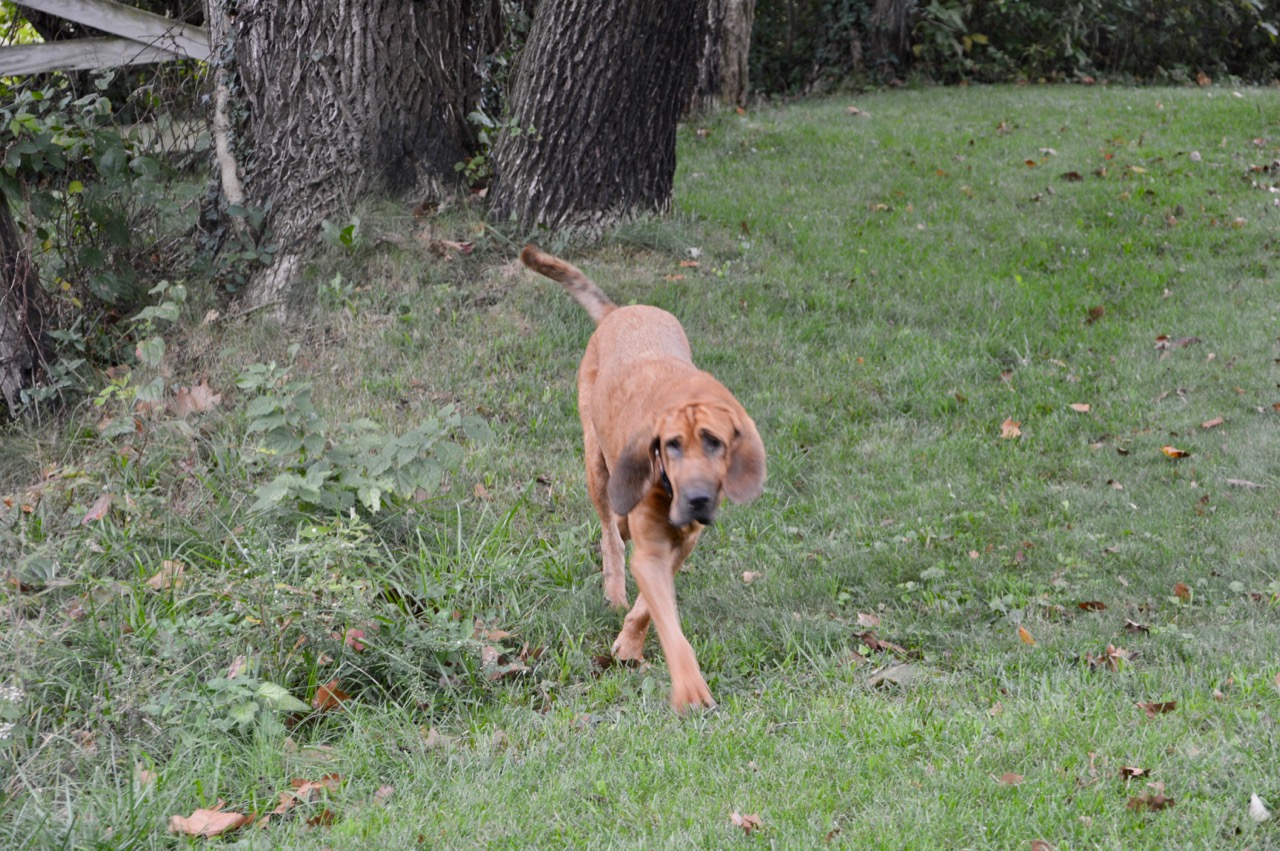 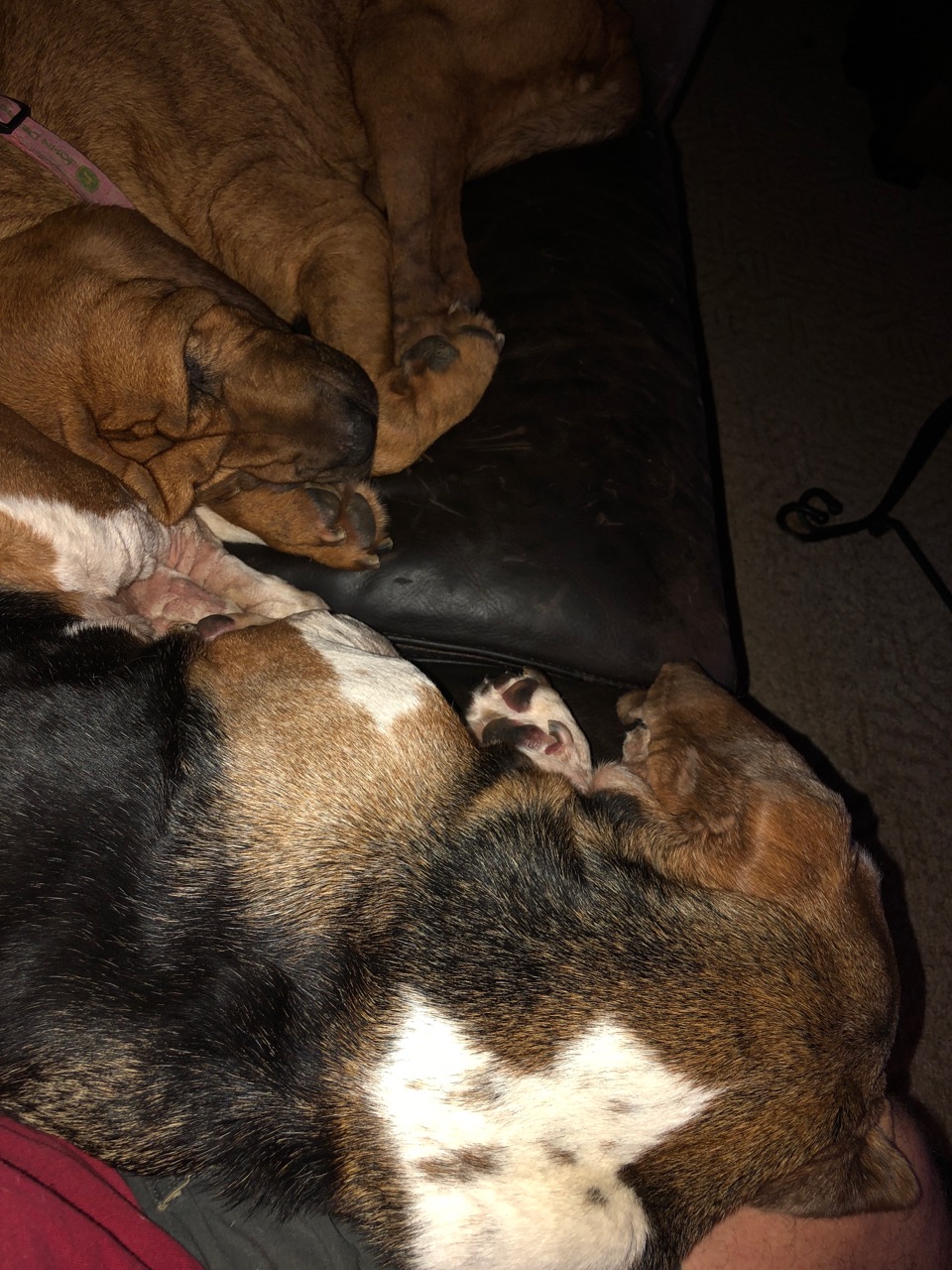 For as long as I remember since she arrived in August 2015, this is their normal position while I watching tv or reading a book. They might flip positions depending who gets on the couch first or who might get up for water. 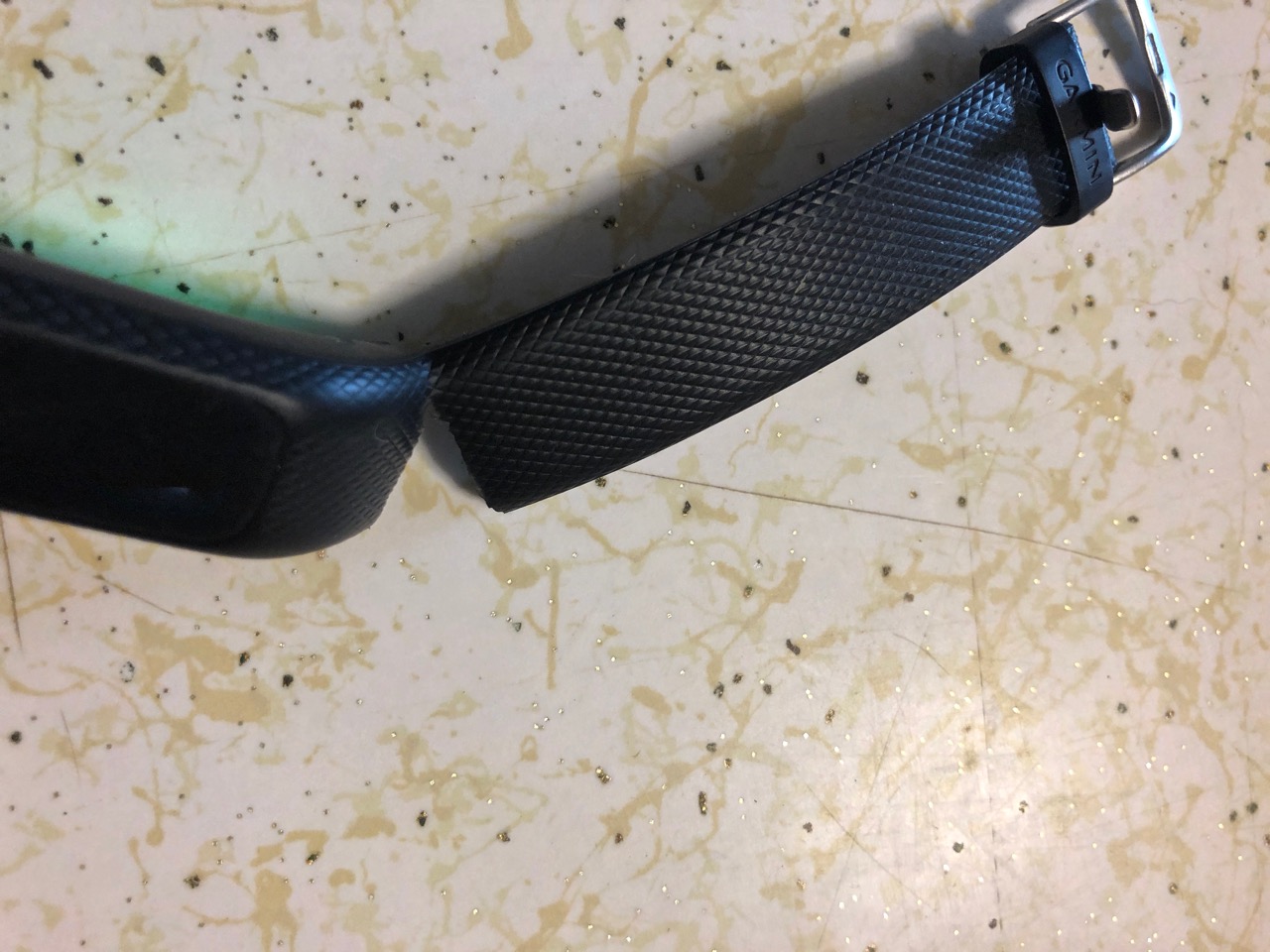 I've had my Garmin VivoSmart 3 for 15 months, wearing it all the time except when taking a shower. I cannot think of anything I would have done to cause this but just like that, the band broke. A search on DuckDuckGo, my new search engine since last June, showed me that I wasn't the only one with this problem. Due to the design of the watch, a replacement band is impossible.

So with the attitude of what could I lose if I contacted their support via their email address, I sent them a nice email stating the problem and letting them know that I have loved the performance of the Garmin. Yet I would hate to move to a new Fitbit or even the Apple Watch Series 4 as a replacement.

Within 48 hours after sending that email I had a reply asking for the serial number of the watch, my mailing address and where did the band break in relation to the hardware. The following morning I had an email giving me a shipping number for my new replacement at no cost. Disposing my watch at a qualified electronics recycling center or store was recommended. 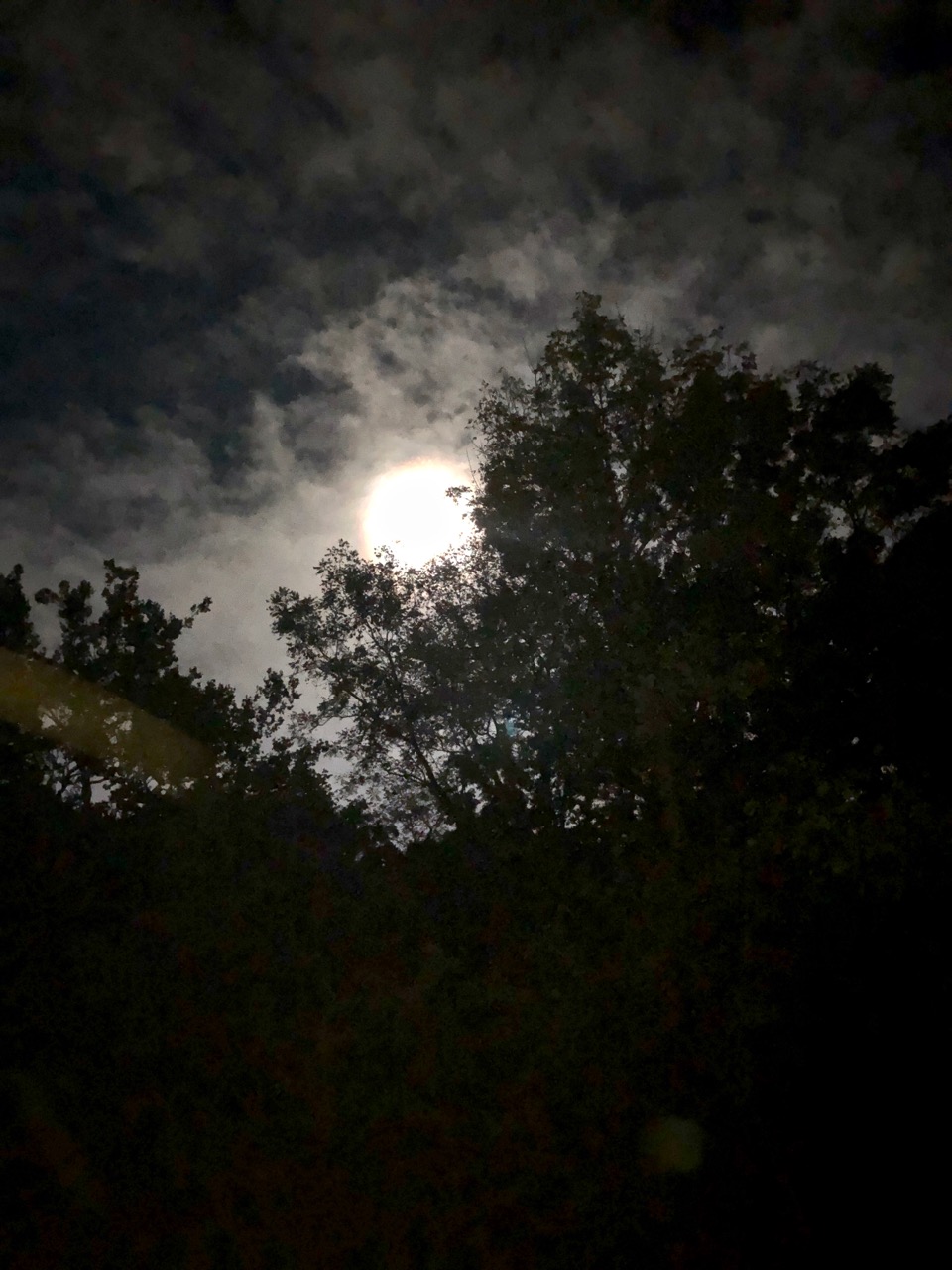 I took this photo with my iPhone the other night while I was waiting for Stella to decide if she came outside to pee or just stand and sniff the air. A few minutes later as she turned to go back to the house I found out she just wanted to get some fresh air.

With the temps at 60° and intermittent light rain today ... it's was a day of reading books, and watching part of an 8 hour movie I picked up a the library yesterday called 'The Looming Tower', a new limited series. It reminded me of a book I read in 2002 named 'The Cell' by John Miller & Michael Stone. Although there is a book out by the same name 'The Looming Tower'.

For Mac users ... I have both the latest version of the new macOS Mojave and iOS12 on my computers, phone and table. It is very stable, fast and some nice new features. It will take about 6Gb of date to upload so I did my update during my free data period between 2am-8am. It did not take that long, that is just the time period I have free 50Gb of data that I don't pay for.

I will never use all the new features on the phone but it does seem to make my iPhone 8 Plus run faster when I am on the internet. It will be a phone that I keep for quite a while because it has a great camera for low light situations with hardly any editing needed.

I also got tired of the newer Safari version not blocking advertisements even after adding the updated Ad Blocker Plus ... so I moved my default browser back to Firefox. Over the pats couple of months they have worked out their bugs where it run much faster and also works well with the new Mac OS.

I want to say thanks to all that made blog comments or sent emails of support since Sadie's passing.

Not as warm as I like but it was a good day here in 'the tropics' of Southern Indiana.
By Steve at 6:00 PM