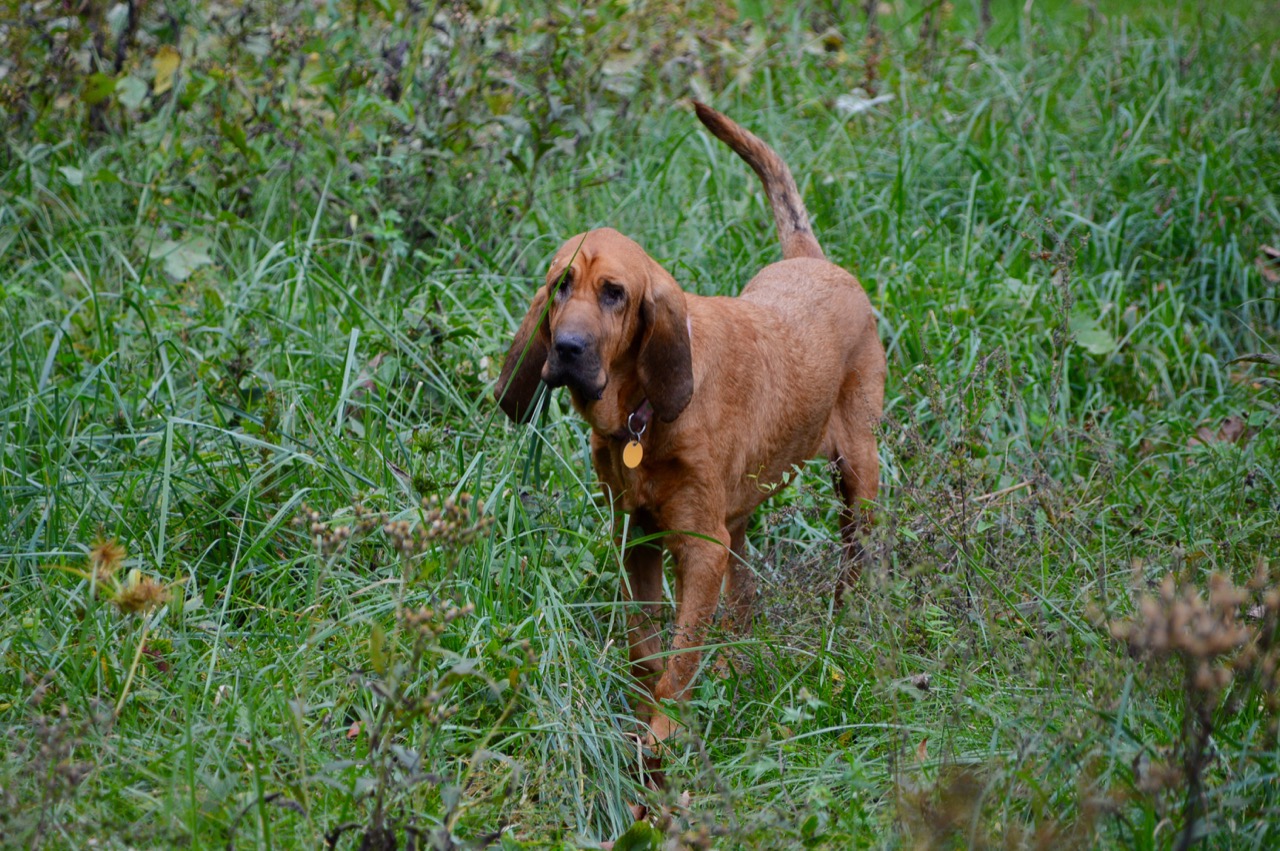 With the temperatures back in the high 80's I moved to an indoor project today that actually started yesterday. I have been wanting to work on my windows, something that is really not a repair but more of making them look better and more importantly last longer. With many years of normal wear with condensation build up in the winters that left some stains in the wood, plus a few hounds liked testing the strength of the window sills with their teeth, I had a few 'indentions' I needed to fill. I also wanted to sand the stains out of the wood, then stain where needed and apply some polyurethane. 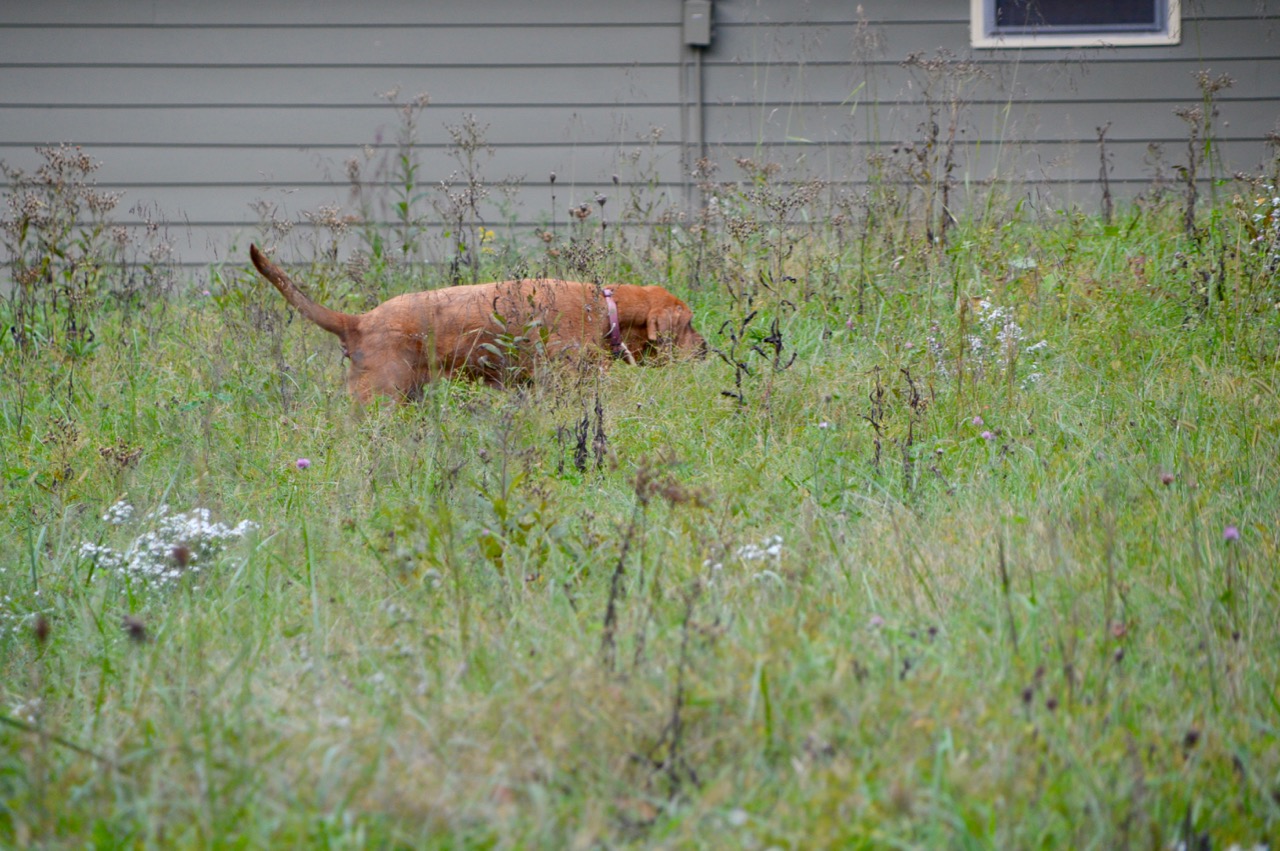 Year by year I kept putting it off. Then for a few years I told myself it wouldn't matter because I was going to have all new windows installed. Of course after that I kept changing my mind. So it was Day 1 of sanding window frames and sills, vacuuming the dust from sanding and then wiping each window with a damp cloth ... perfect time to stain is tomorrow morning.

As you can tell, Stella fell back into her old habit of ignoring me and made a strong attempt to head due north after stepping into the field. I watched for a while and took pictures as she moved north, in the direction of the neighbors backyard. 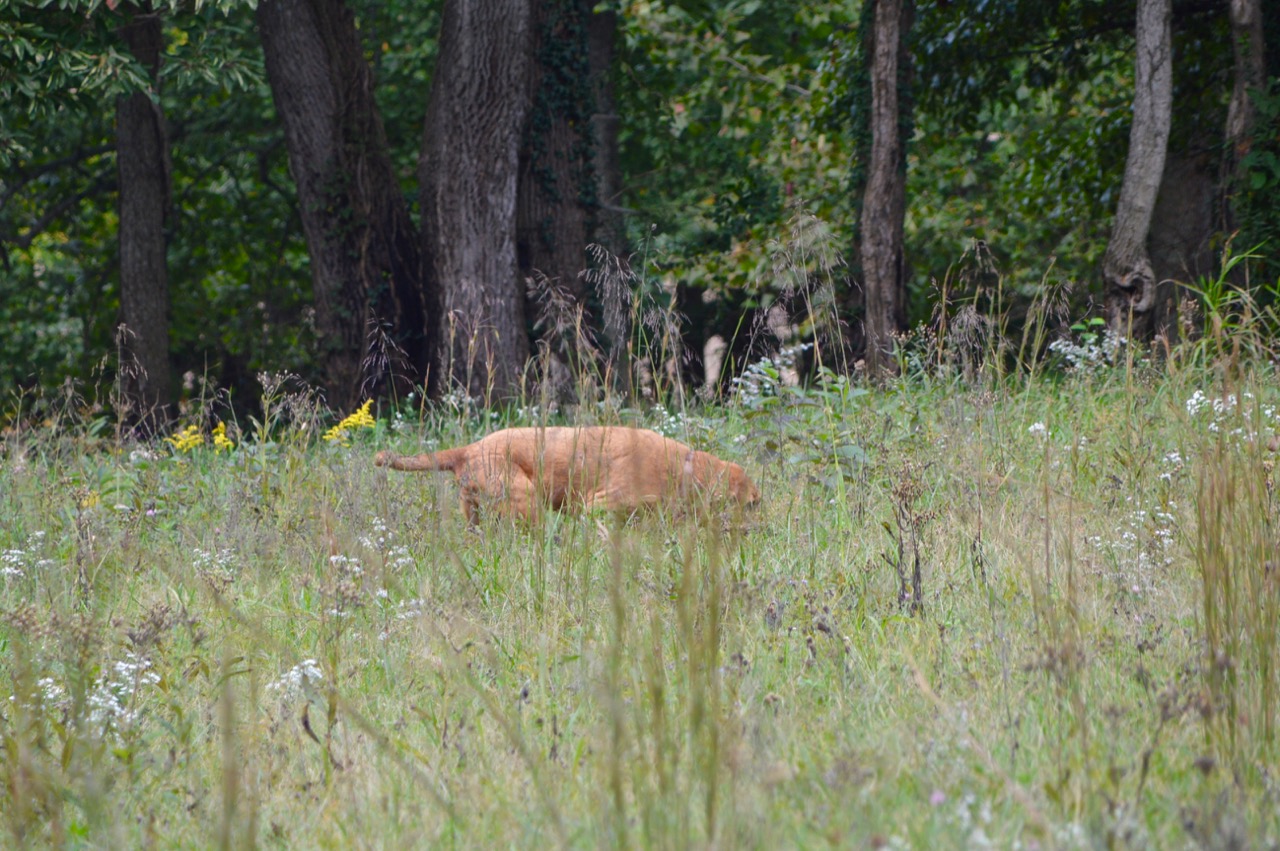 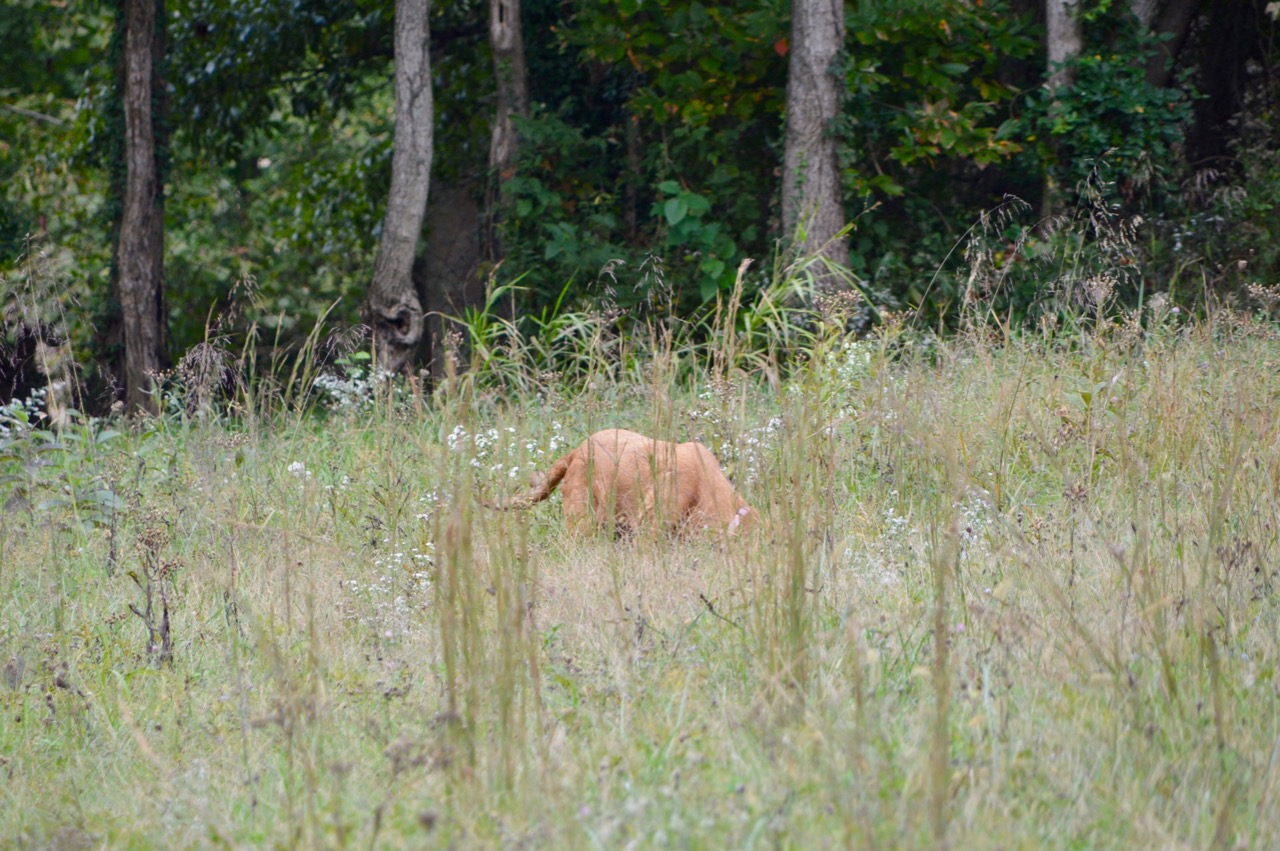 Finally I had enough and decided it was time to go get her. She still ignored me while I called her name but finally looked my direction. When she saw me heading her way, she made a right turn and headed toward me like she had been listening to me the whole time. 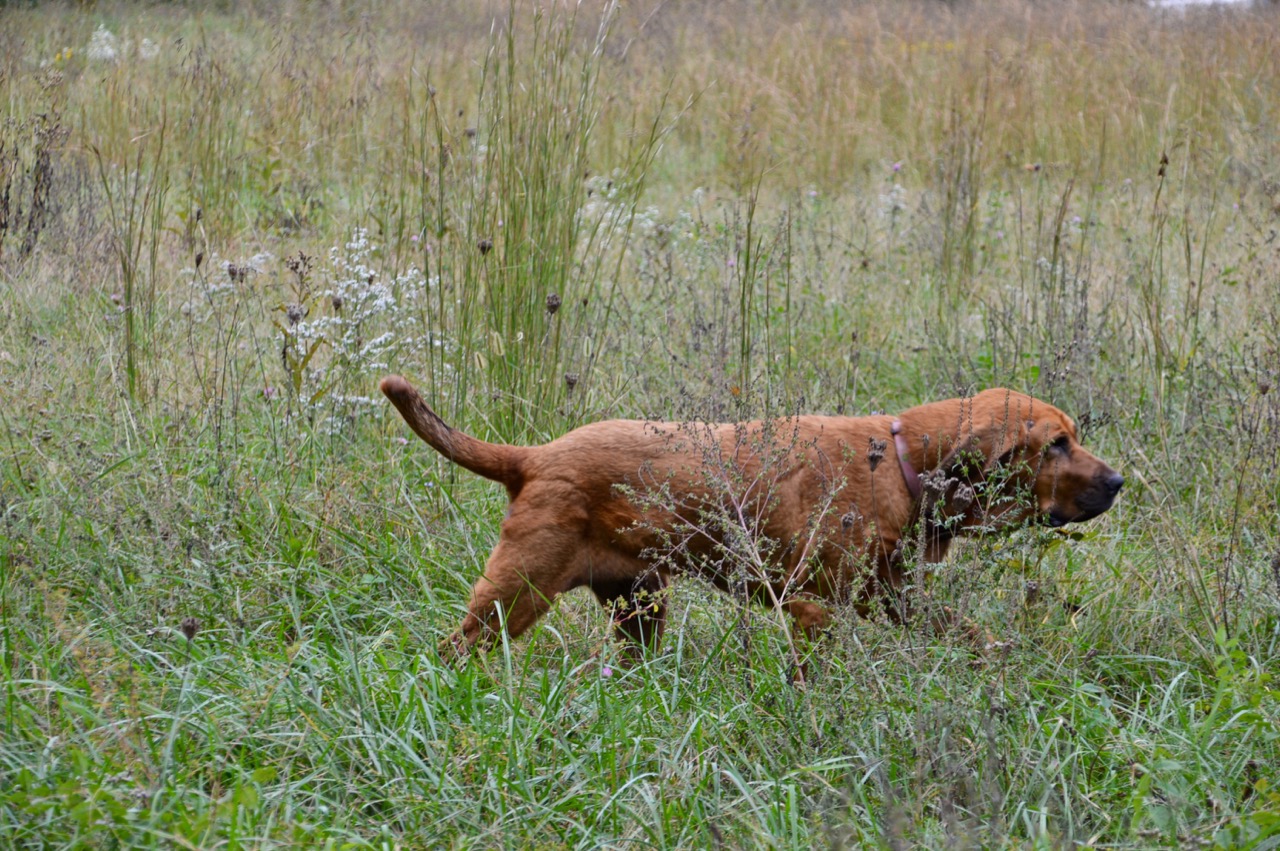 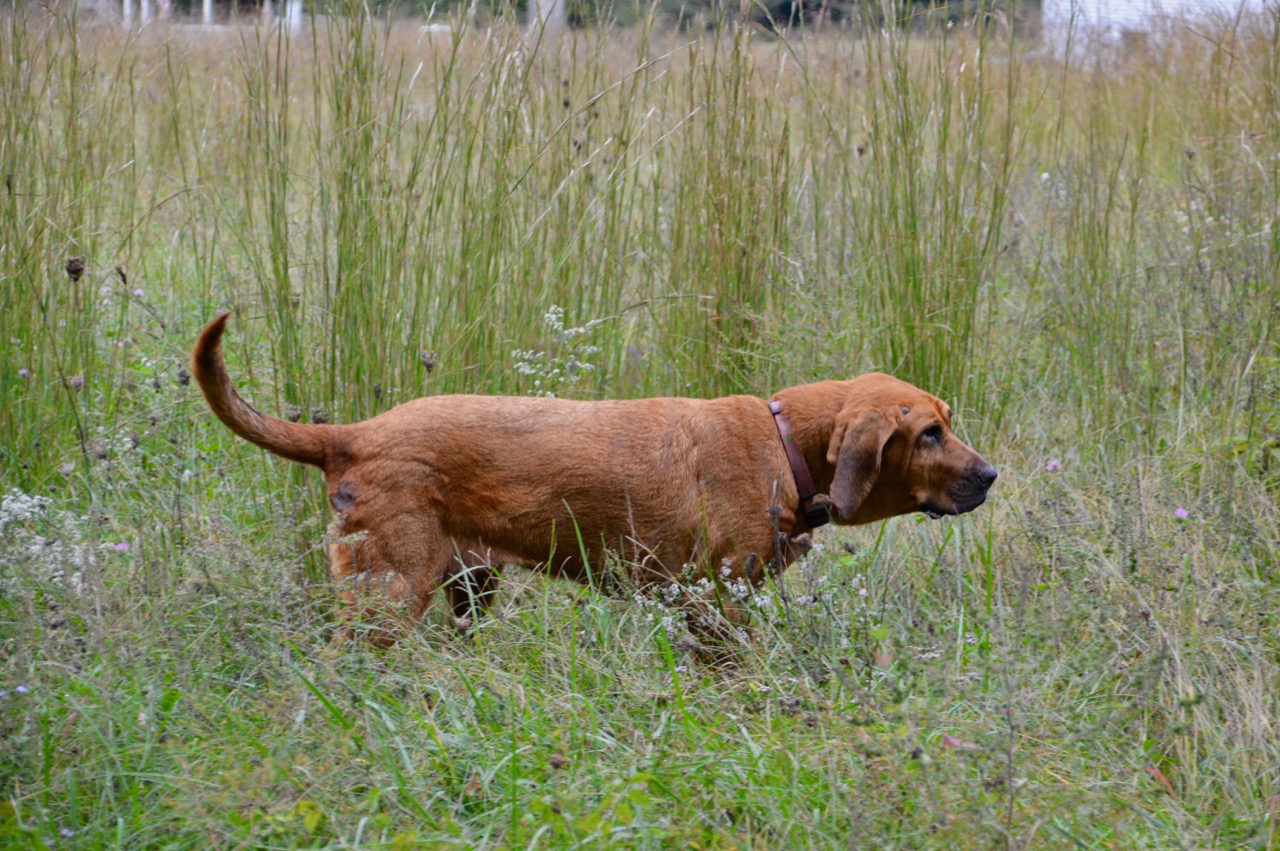 Hard to believe looking at the morning sky a little after 10:30am, that thunderstorms were in the afternoon forecast. Plus the humidity was heading back to the 90% range and a high of 86°.  {Note: By 4:45pm it had not rained yet ... it was bright an sunny.} 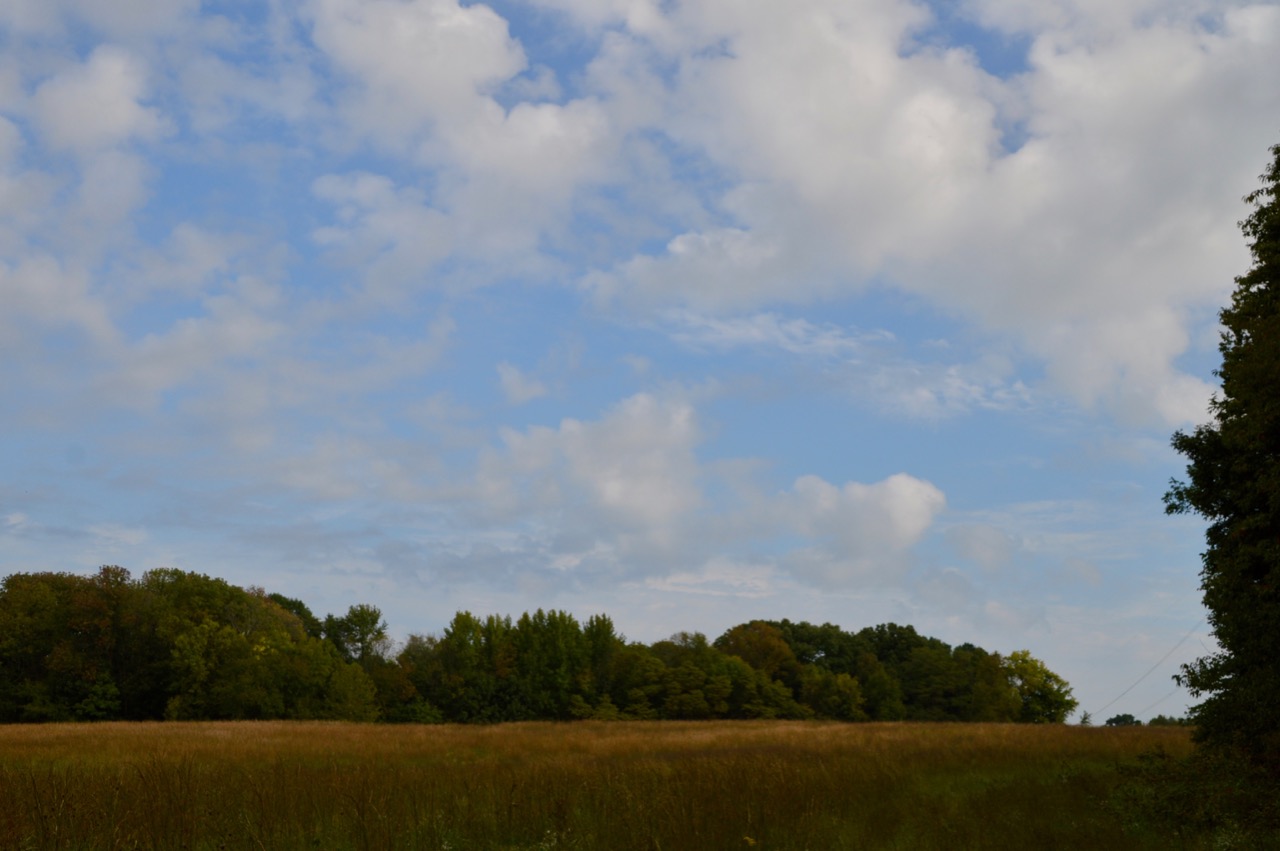 As I planned my strategy for sanding all the windows and the front door which is natural wood on the inside but painted on the exterior side, I noticed that Stella was not moving around in front of me today on the walk. She kept her distance behind me and never had the urge to pass me. 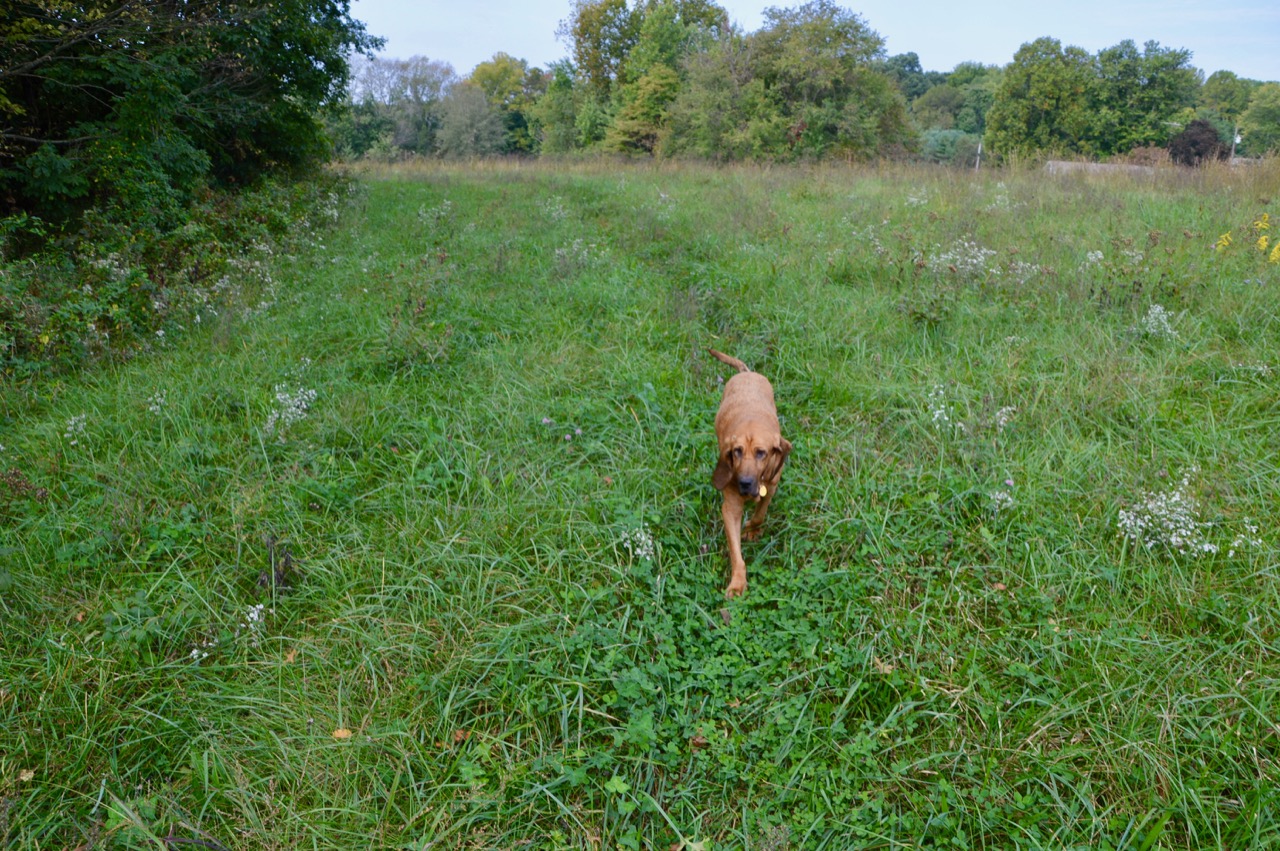 As you'll see she walked quite a ways just following me. 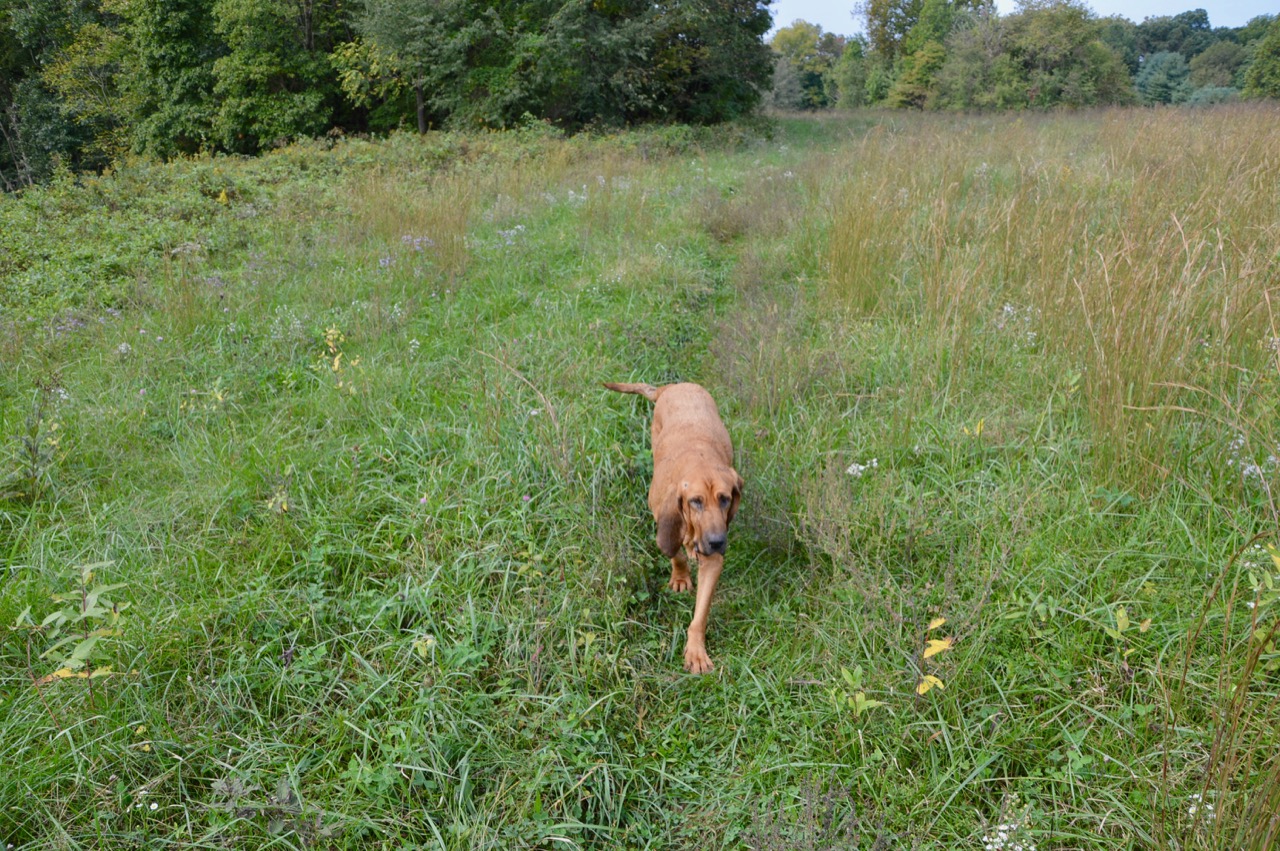 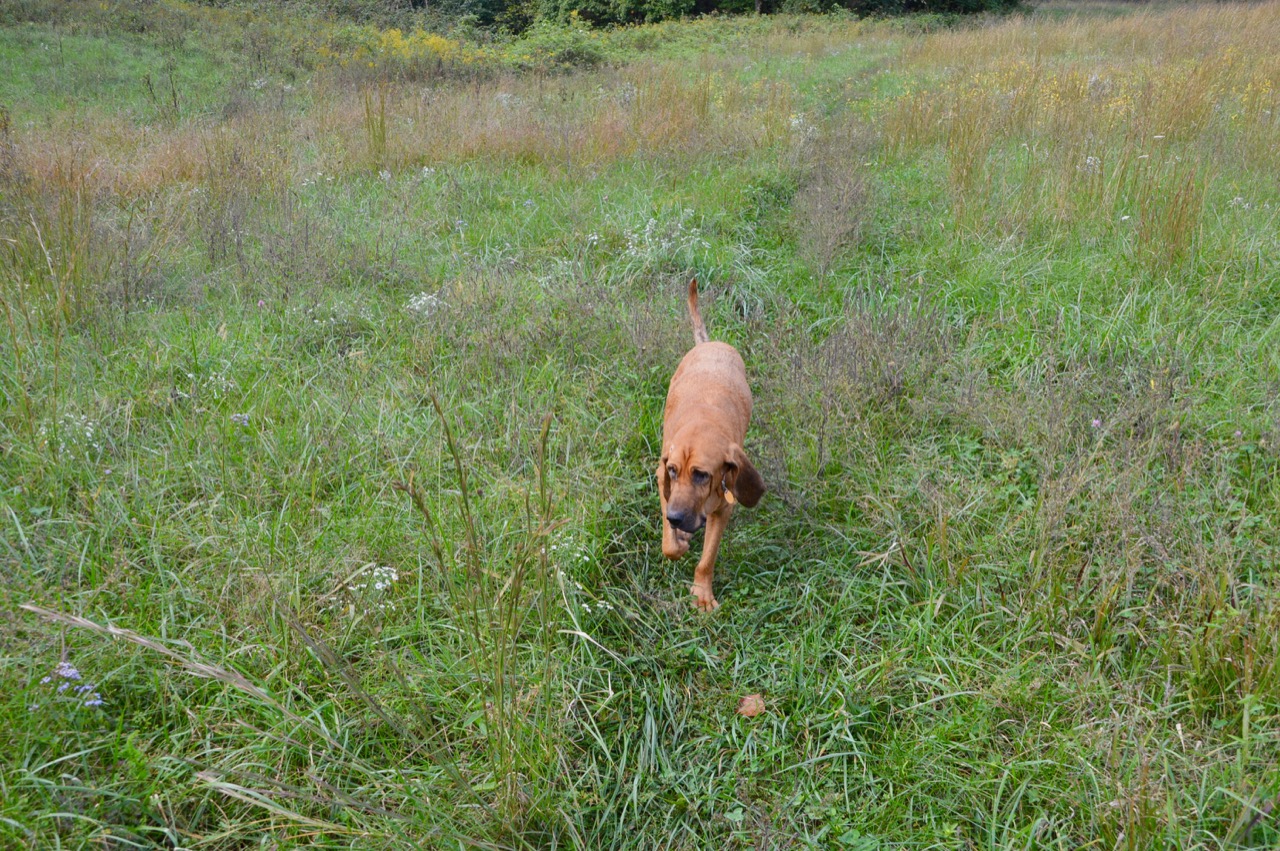 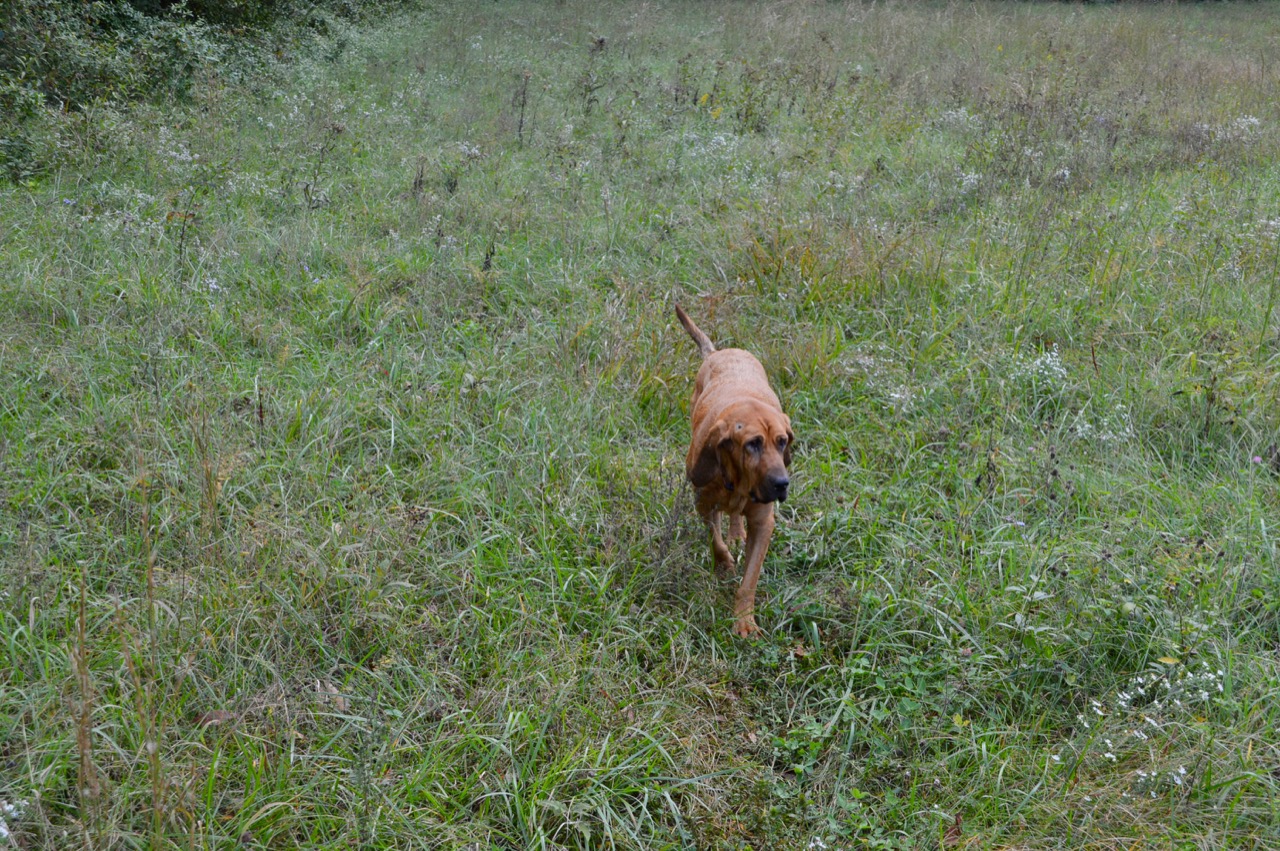 There was a time she needed to stop and scratch. I have let her scratch but make her stop if she goes near three areas that are in the process of healing. (1) That spot on her head (2) her right eye (3) up in the corner of her left front leg where the staples are. 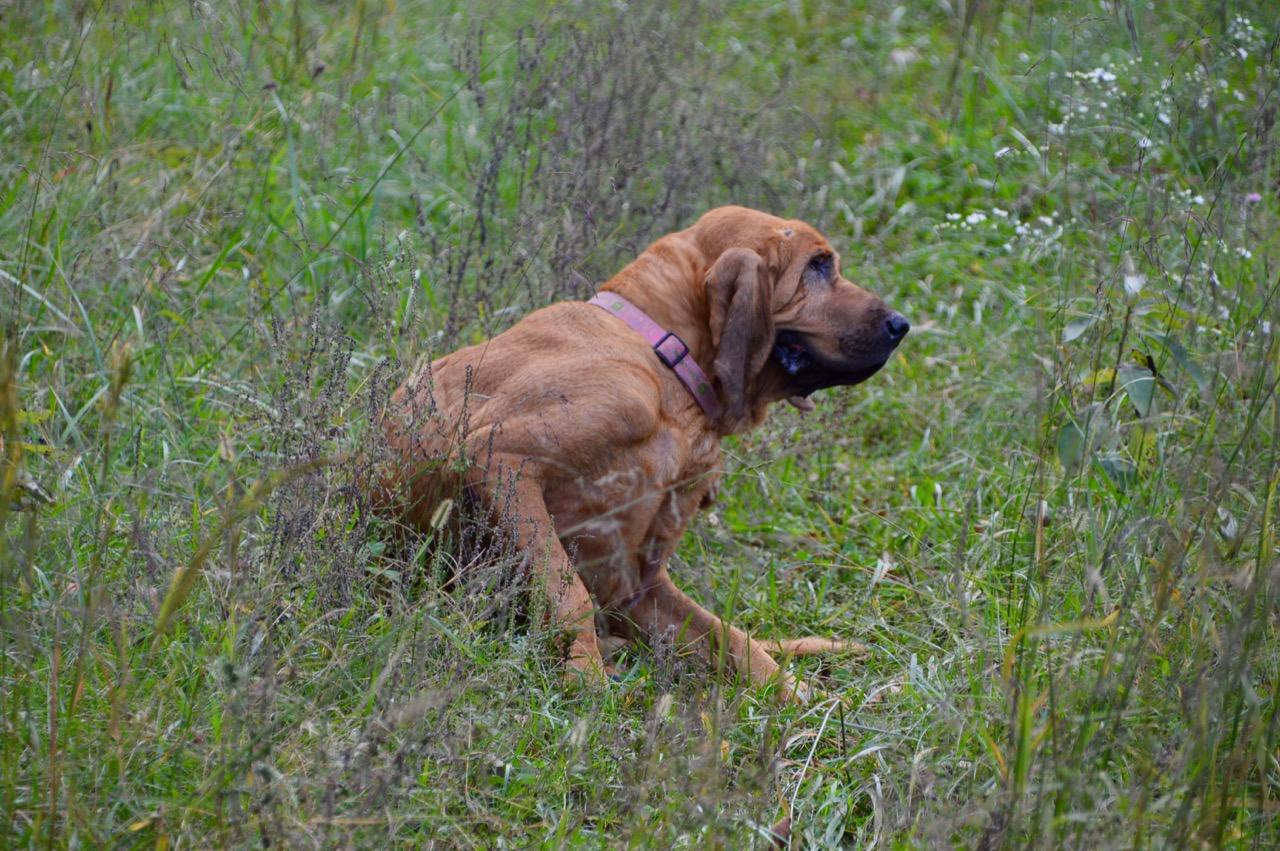 As the squadron of mosquitoes buzzed by my ear once, I decided to beat them to the house ... I increased my walking pace. I had been walking for a few minutes when I realized I had better turn around and check on Stella ... she was nowhere in view !!!!

Then she raised her head and I barely saw her way behind me to the right of the path if you were looking from my location. 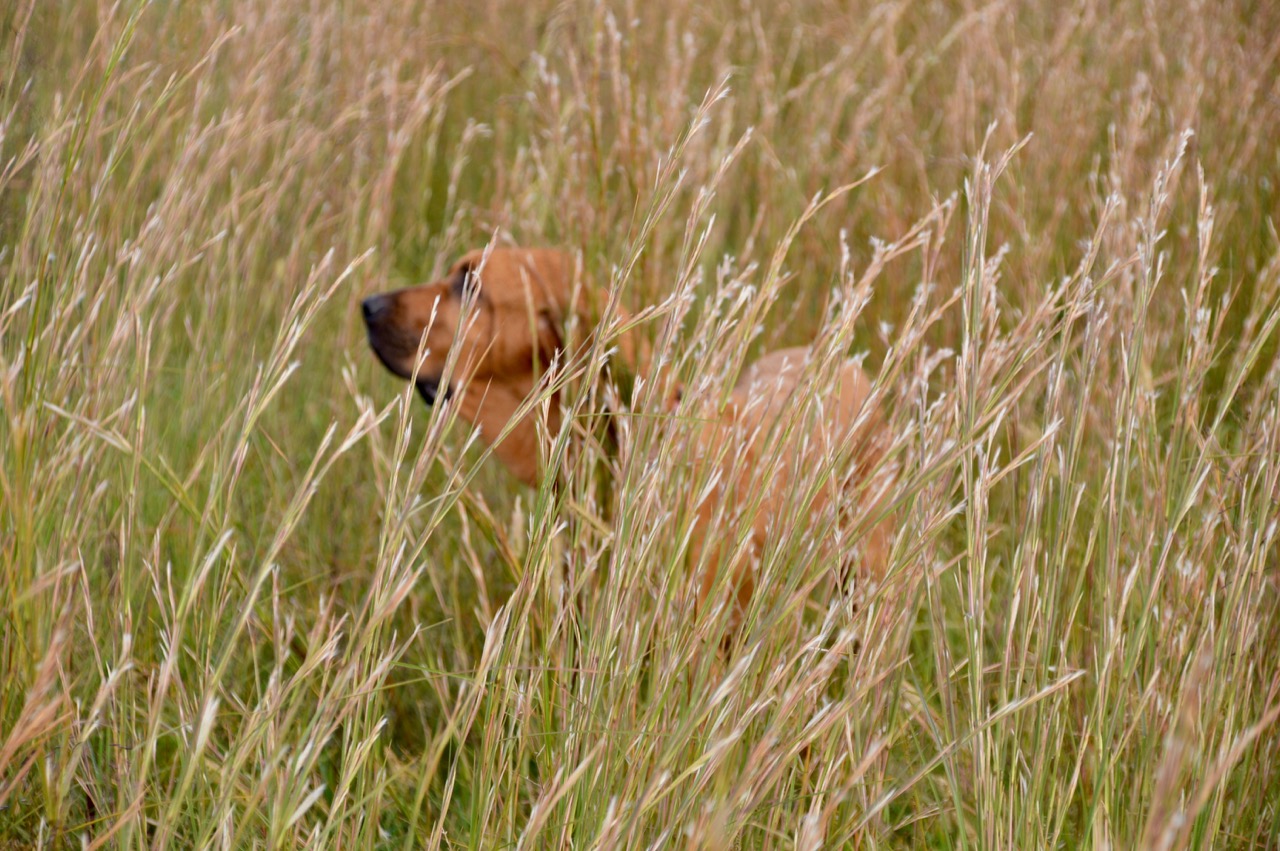 When she caught me looking that direction she stool very still as if she was hiding from me. 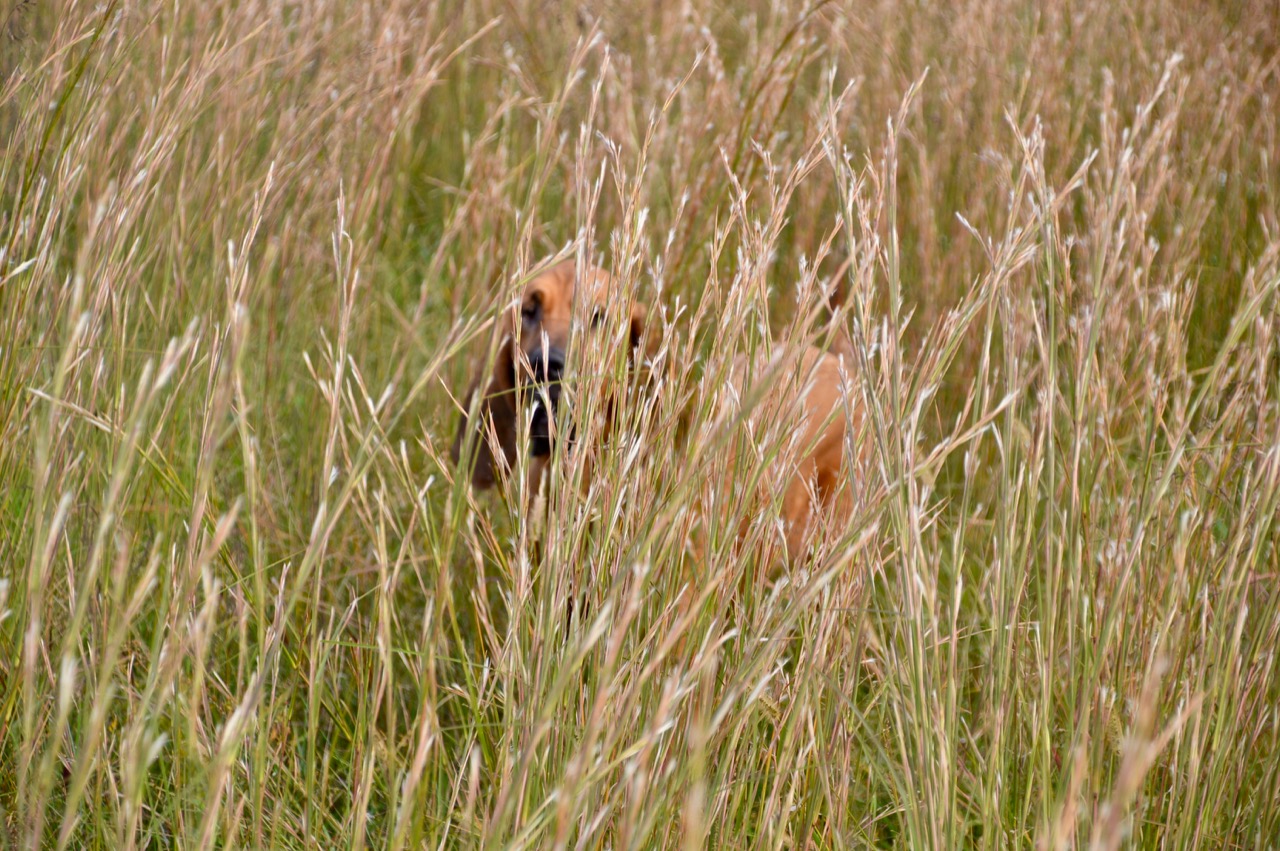 When I called her name she started walking toward the path, then started trotting toward me. 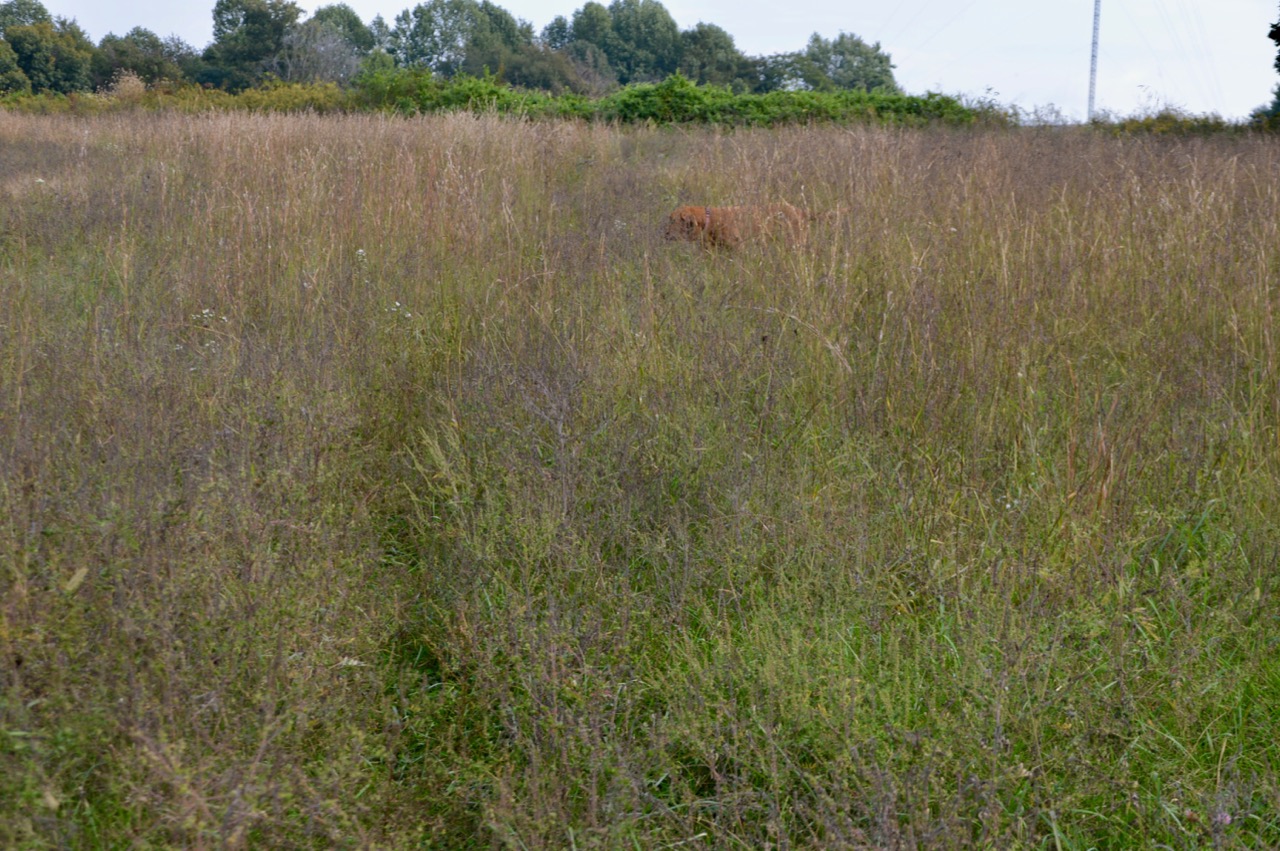 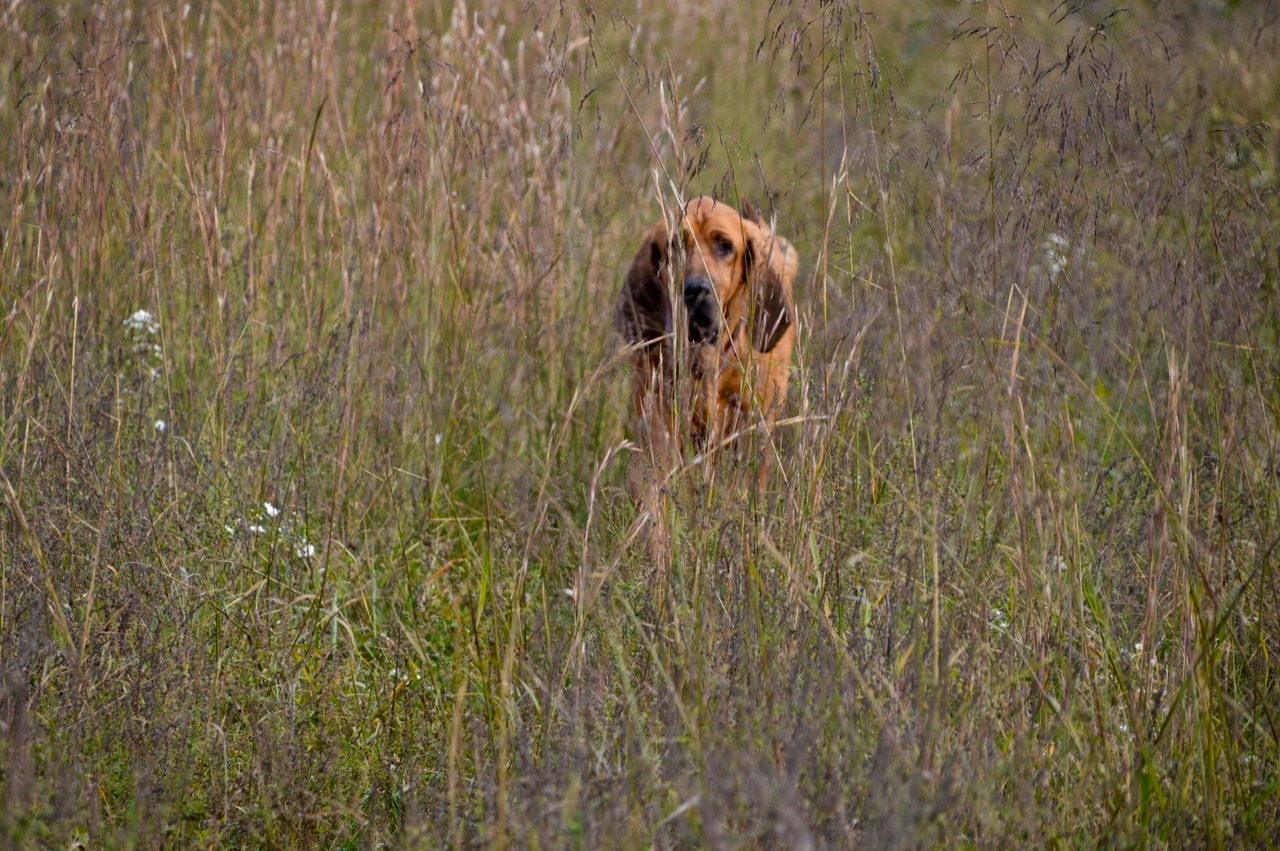 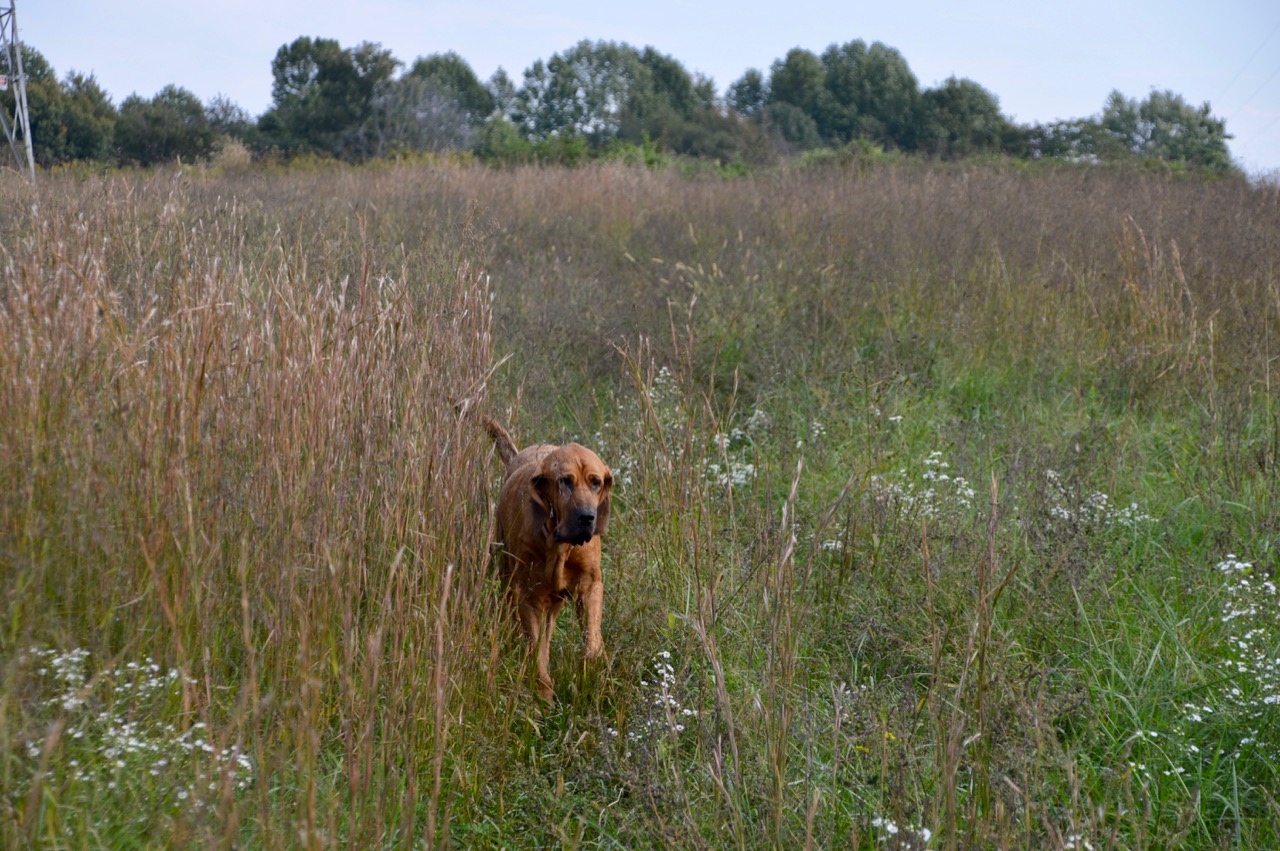 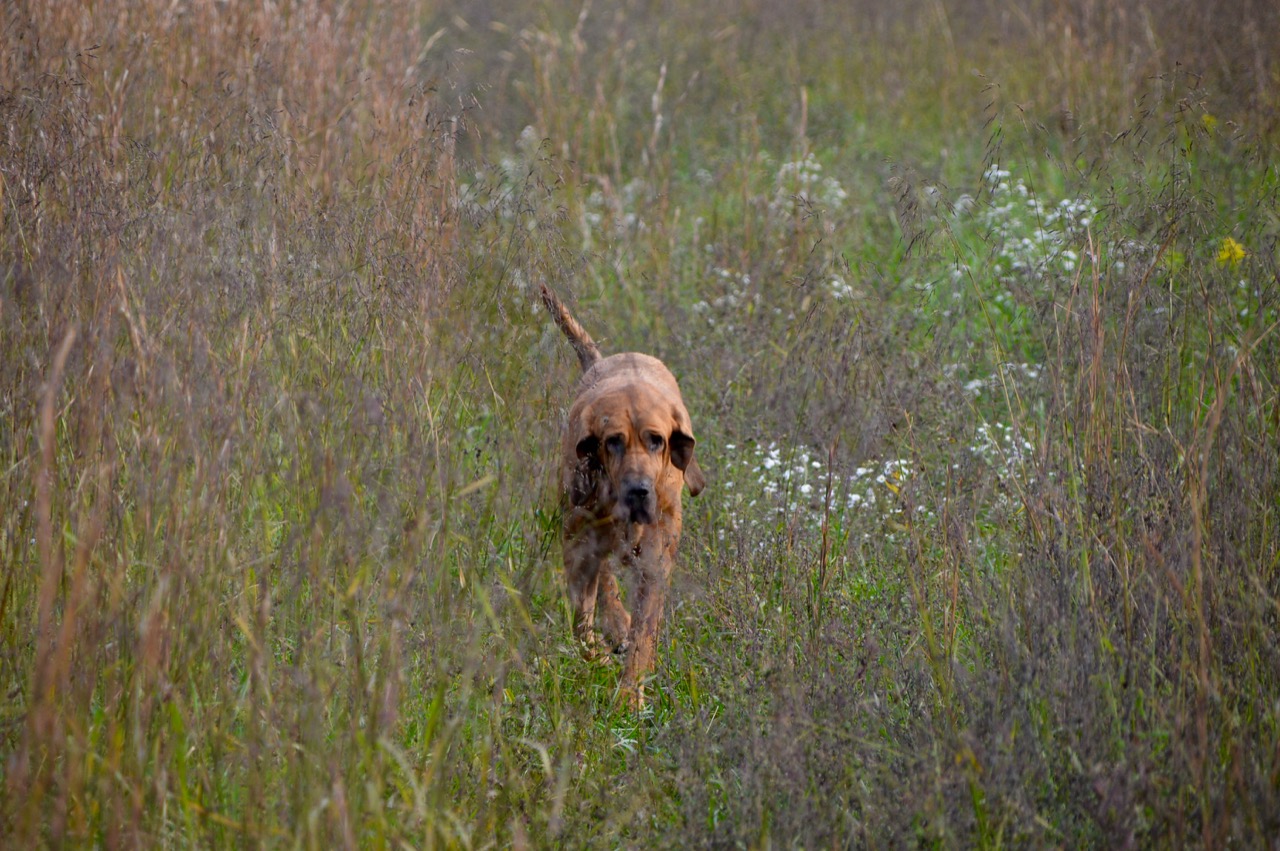 That trot didn't last long and in the meantime while she slowed down ... the mosquitoes decided it was time to attack me. Should I wait on a slow moving hound or sprint to the house to get away from the mosquitoes?? 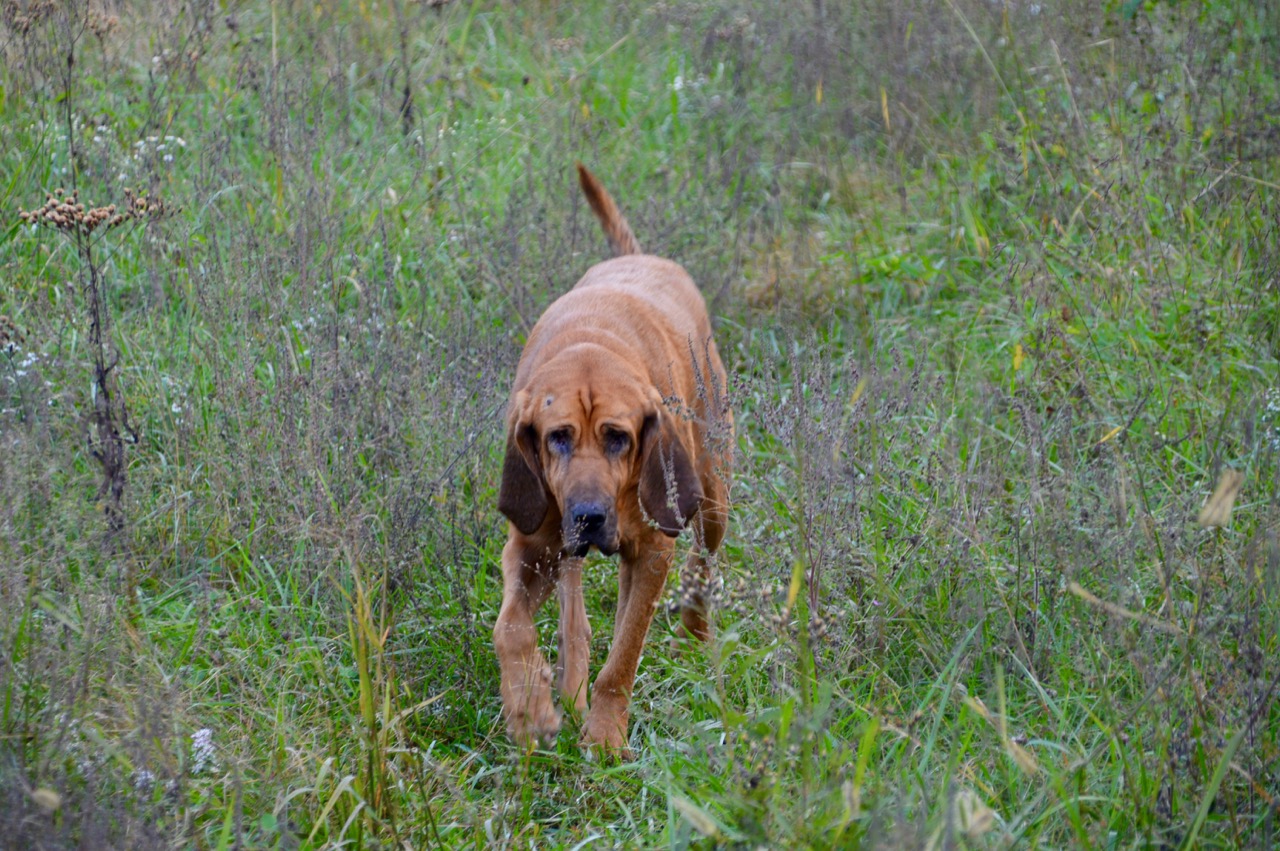 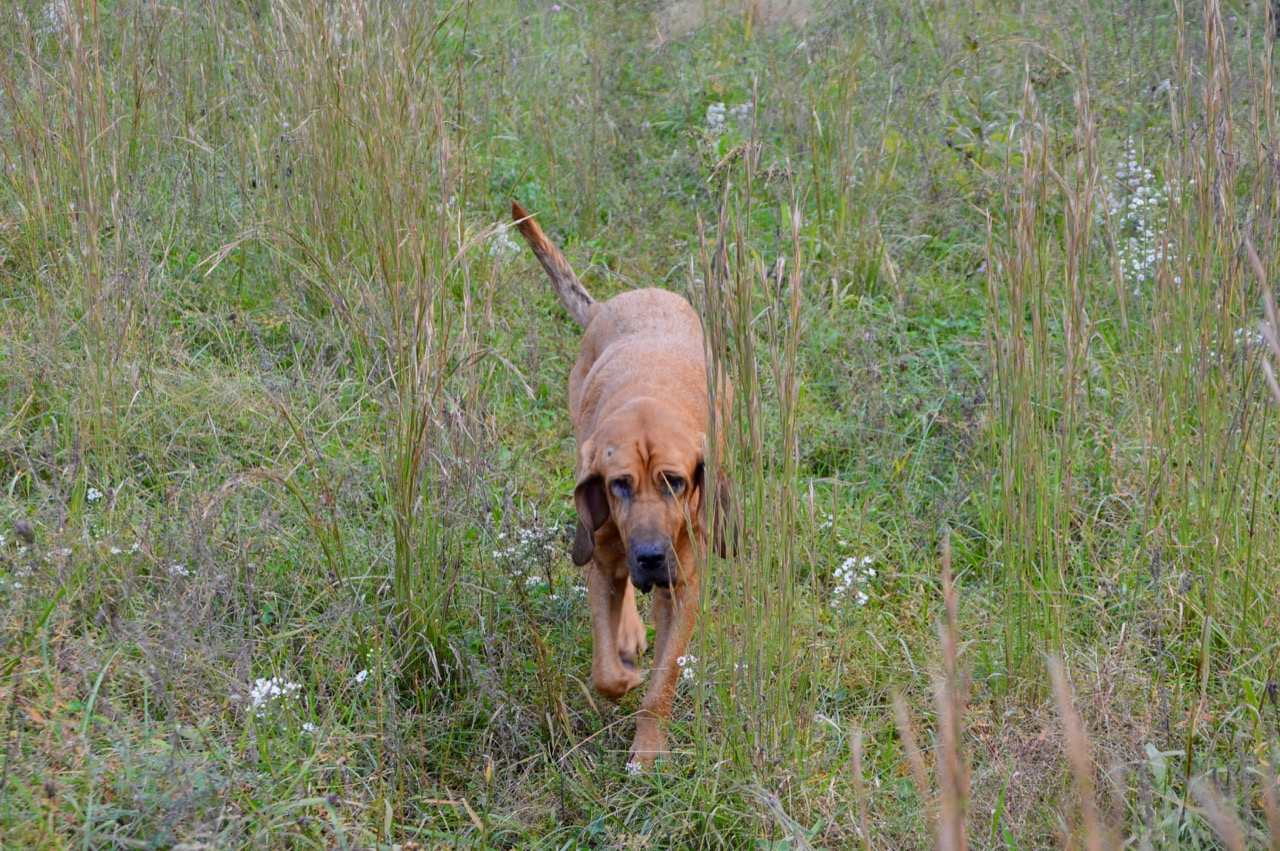 I took pictures of other things. 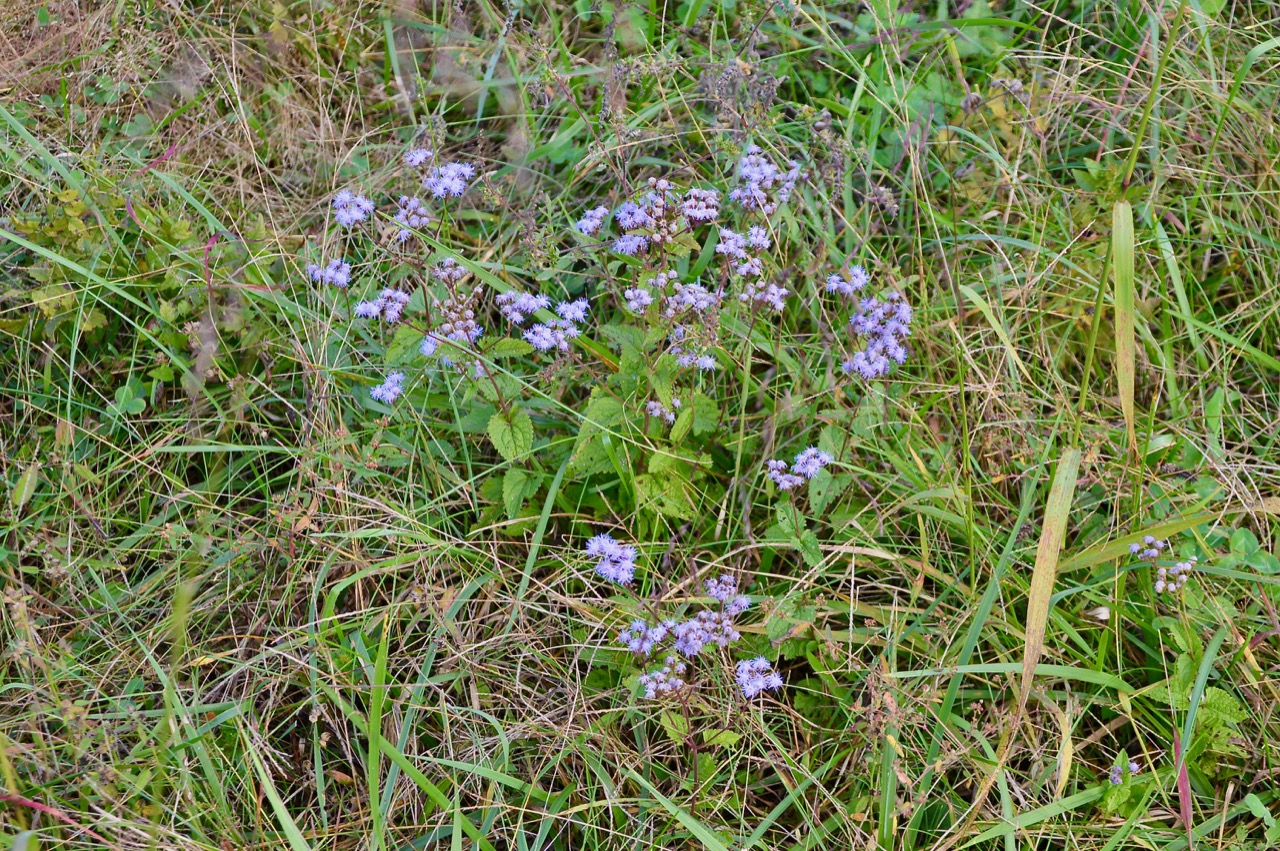 As she slowly walked around me like there was no urgency, no reason to sprint to the house ... it was just another morning walk to her. 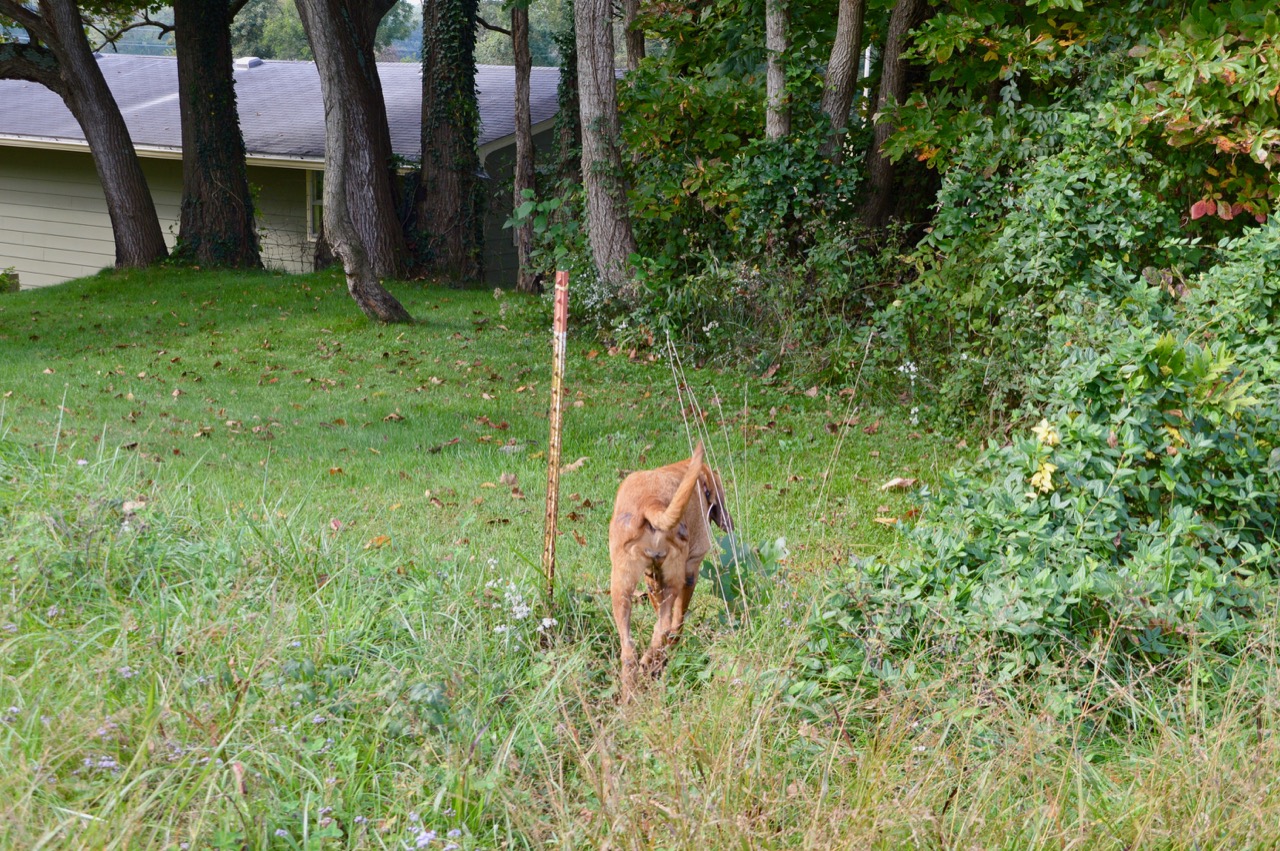 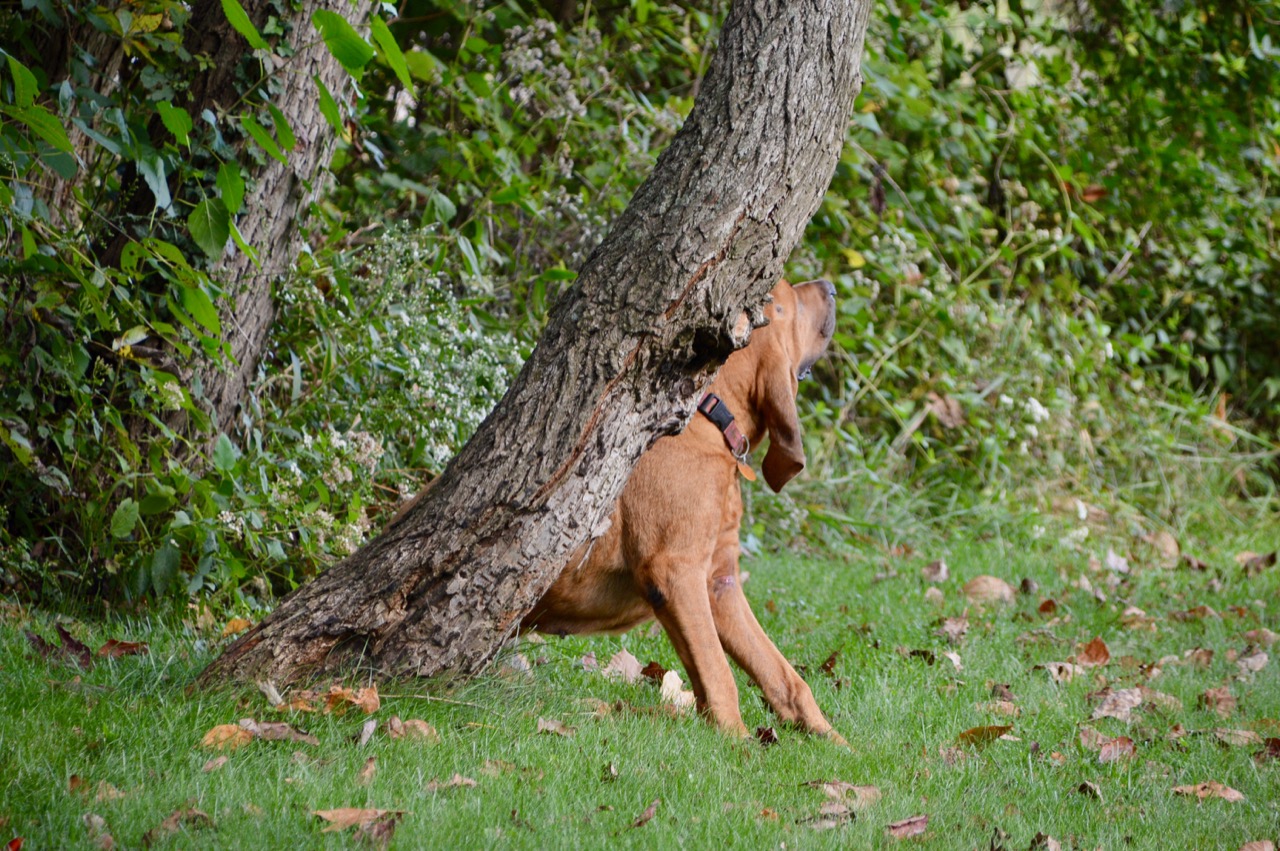 She is one of the most nonchalant hounds I ever had ... maybe even more than Winston was. 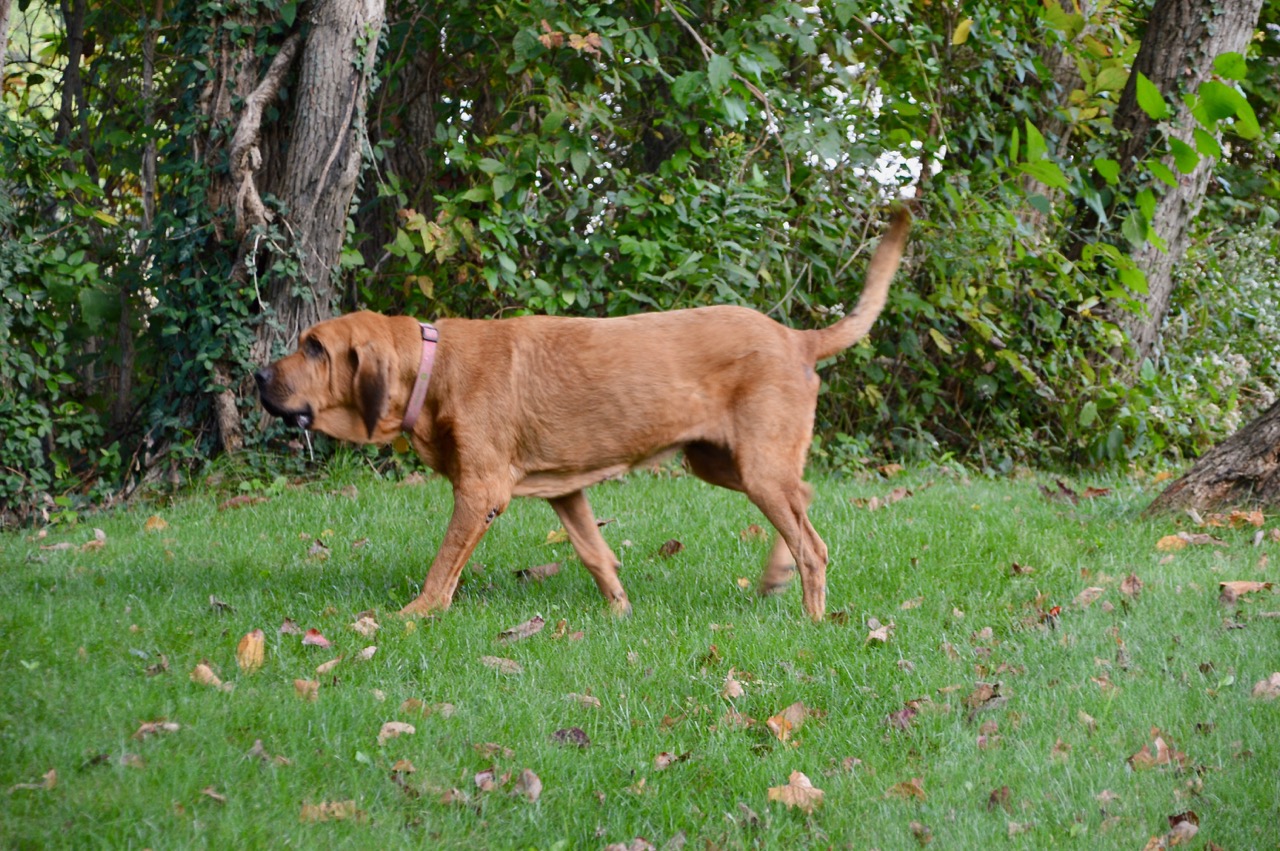 Heidi was waiting for us when we got back. She seemed to think it was time for lunch, although it wasn't even 11am yet. She went into her nonstop barking mode to convince me it was time to eat ... but she had to wait until 11:30am.

I think you will agree with me when I say I can see a huge improvement in her looks these past few days, compared to this summer. She is also a lot more active. I tend to believe it's from her surgery on that tooth infection instead of not having two large bloodhounds around. 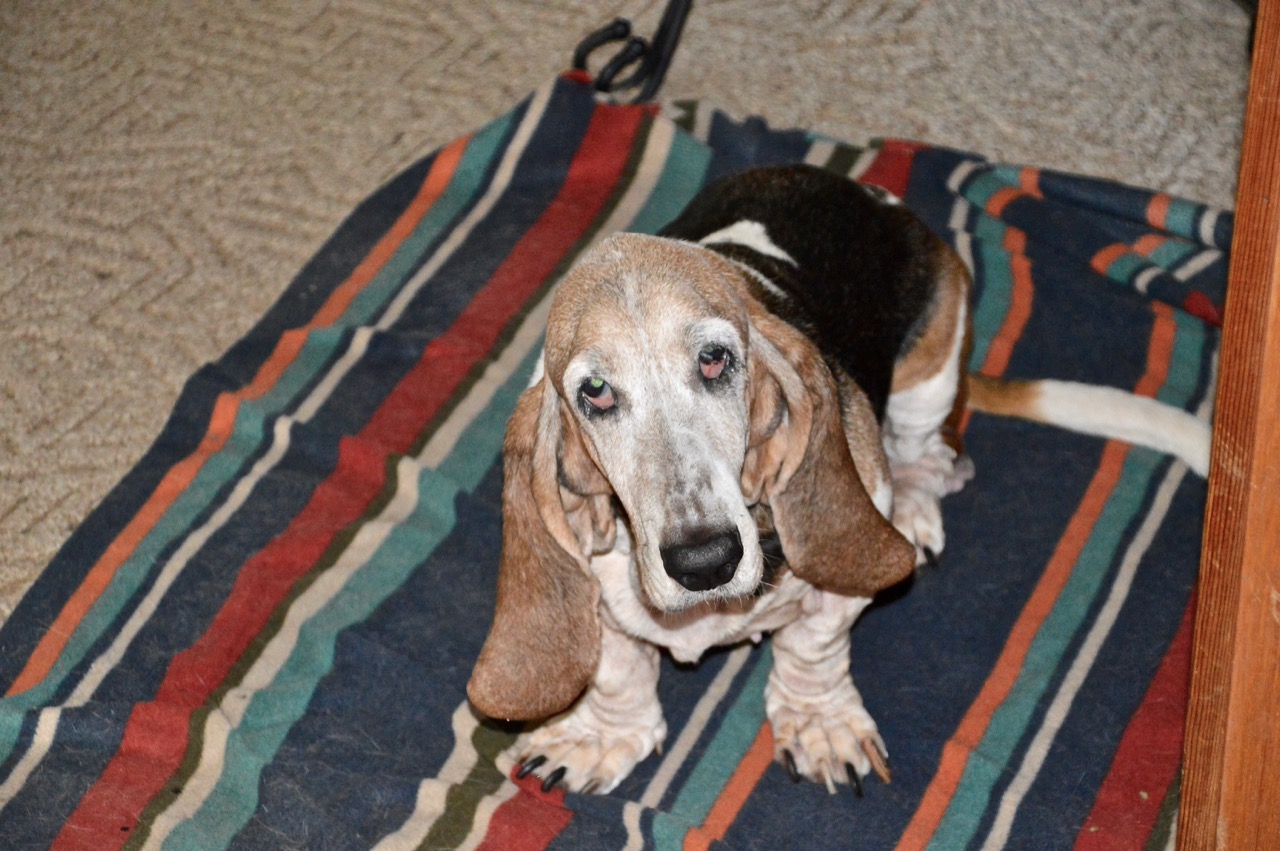 Stella checked the air quality after her lunch but nap time for her was just a few minutes away as I continued sanding my windows. 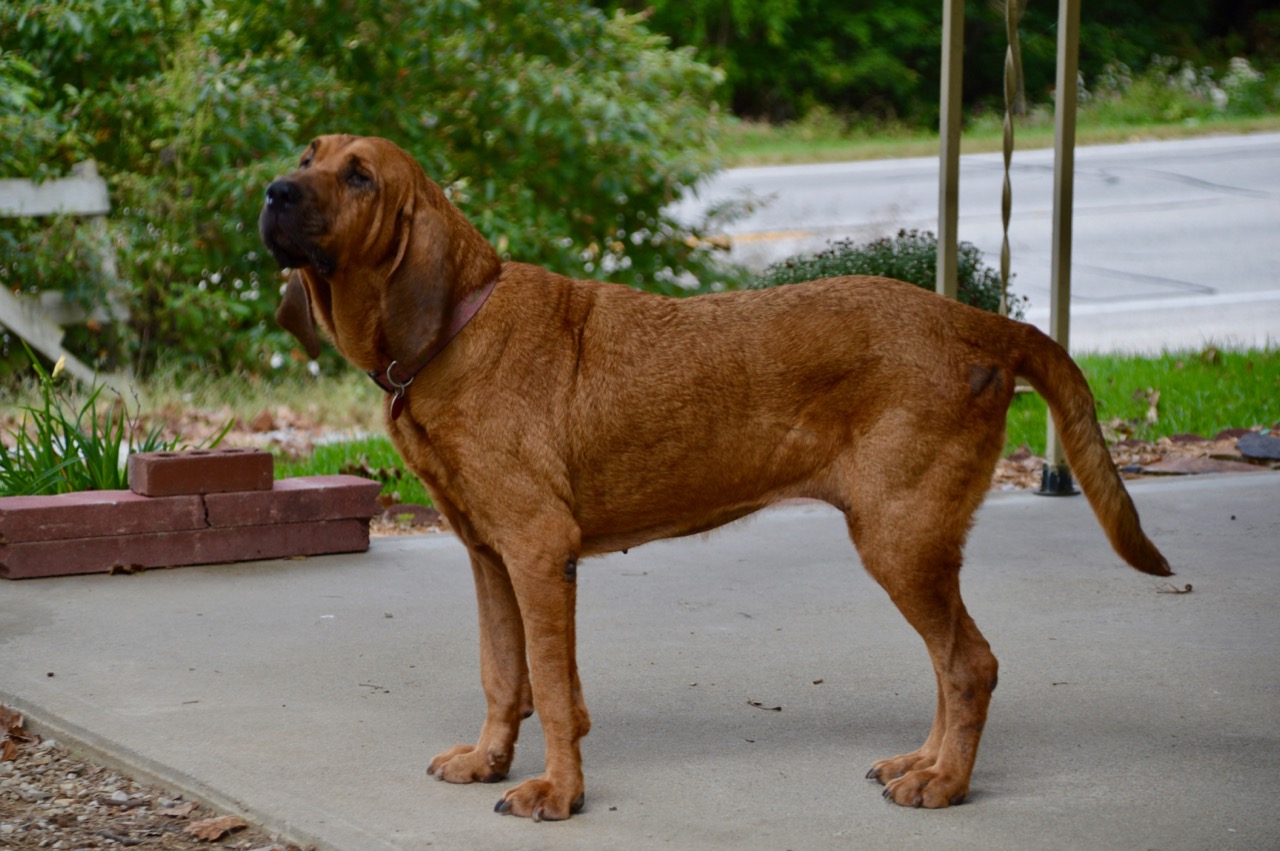 Tomorrow I will find out if I was close in guessing the color of stain to match the wood I have. I was asked once why don't I just sand all the wood windows and trim, apply primer and paint all the woodwork white ... but I like the look of the natural wood in this older house.

Only one baseball game to watch tonight, no football ... plus I am finishing a couple of books I picked up at the library last week. I plan to apply polyurethane on Thursday after 10am ... maybe Friday will be a good day to wash the car and mow the yard.

Another good day in 'the tropics' of Southern Indiana.
By Steve at 2:30 PM