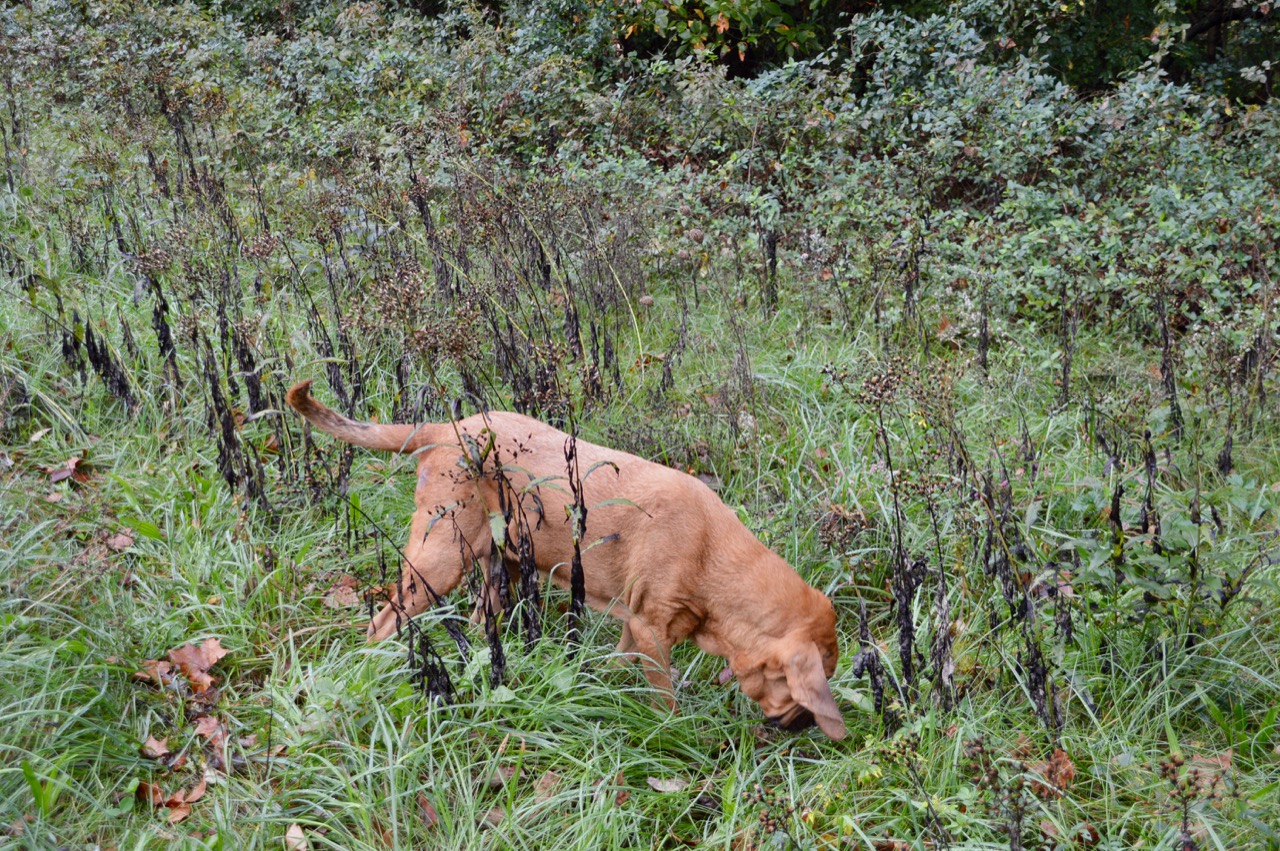 While sitting outside this morning enjoying my first cup of coffee, the weather reminded me of those when I lived on Whidbey Island NW of Seattle. It was mid 40's, light misty rain and signs it had been raining during the night. Besides being in Indiana and not Washington, the other difference was ... zero wind here. Both Heidi and Stella were back to sleep since they finished their breakfast and I wasn't sure at that time if any walks would be taken today. Rain was in the forecast for most of the day.

Stella is starting to show her independence again after a short period of hanging close to me most of the time since September 15th. We had just started the walk where she found something interesting,  that she never moved. I had to backtrack on the path to talk her into walking.

The dead ragweed really looks bad when it's wet and overcast. 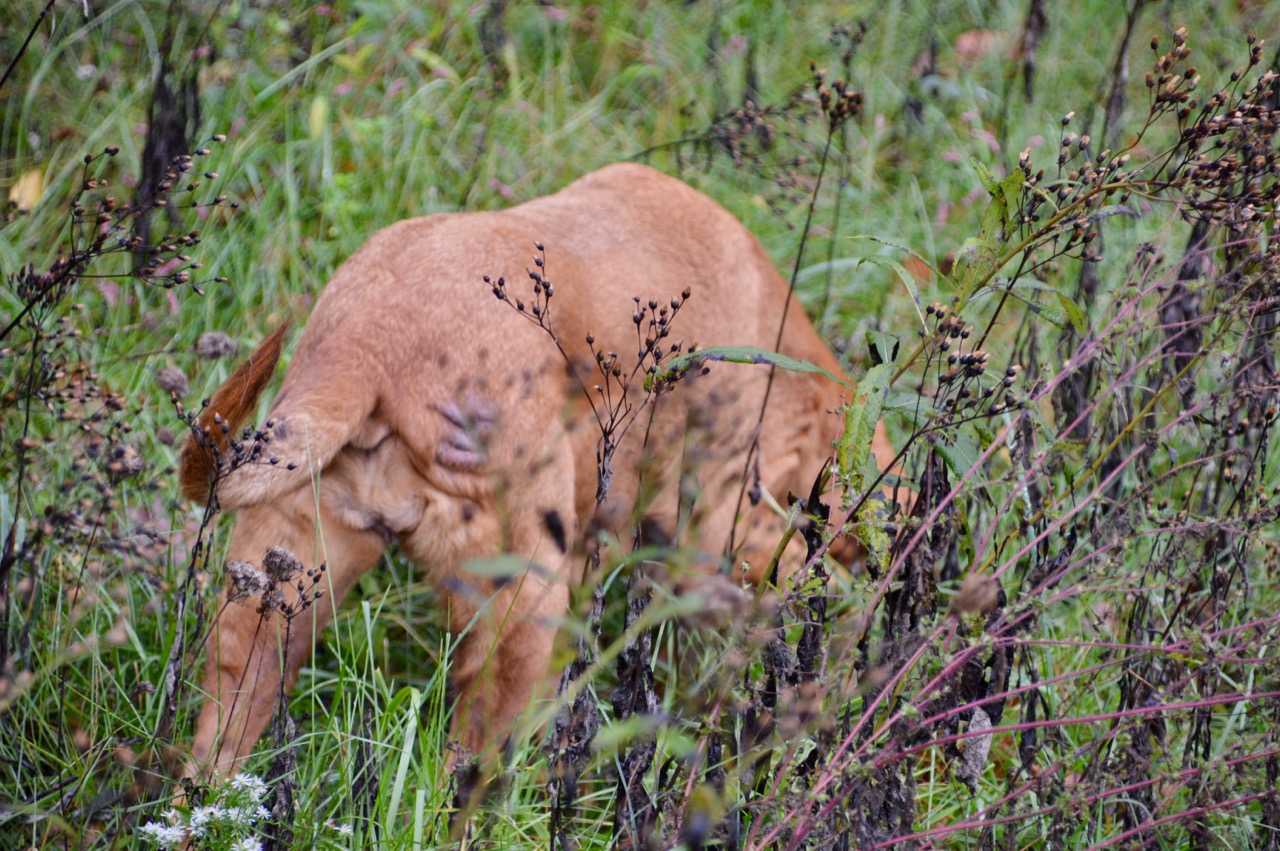 She eventually started her walk back toward me. She is also starting to show more tracking than the past few weeks. Again like yesterday morning, I saw a lot of fresh paths where the grass was mashed down sometime last night or early this morning. Those paths were not there yesterday. 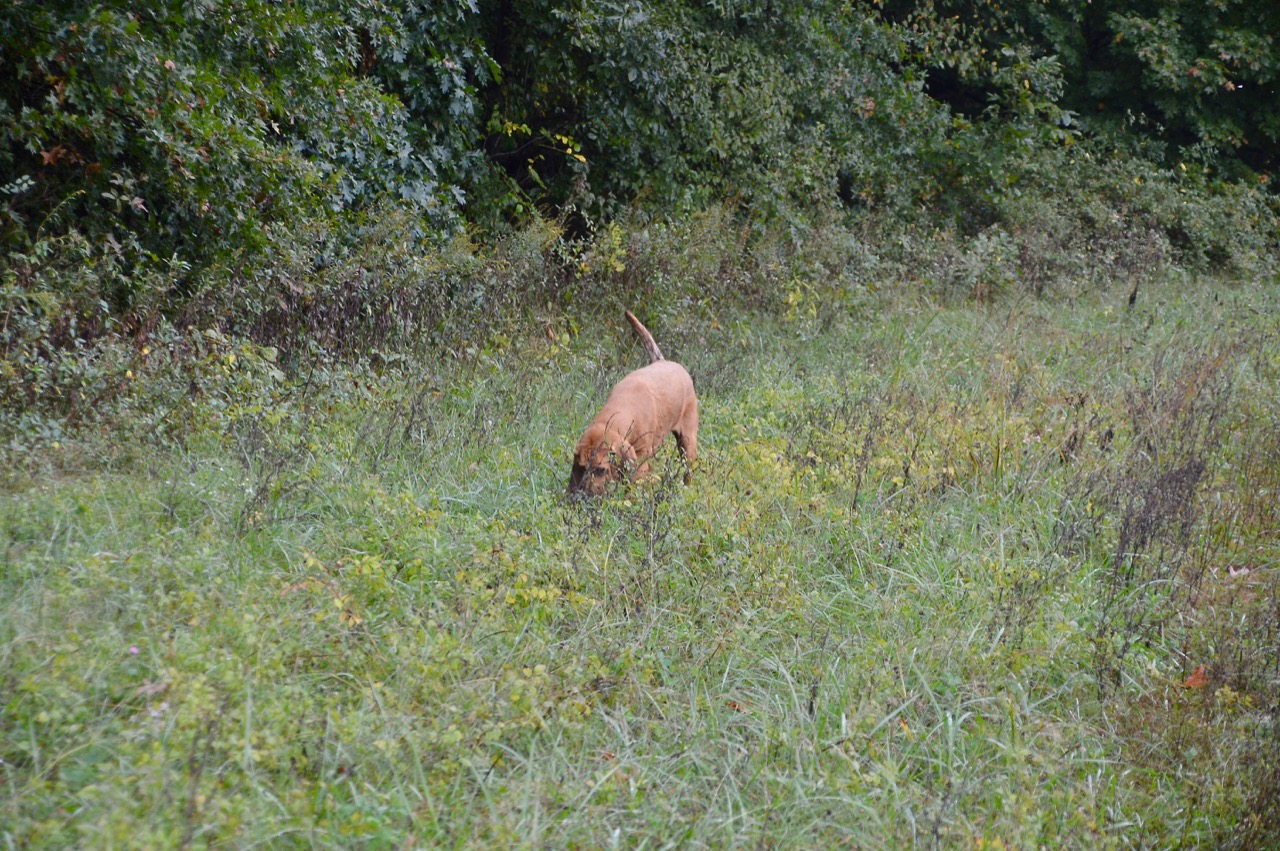 Once she decided it was time to get going, I barely caught her running when I turned to see where she was. She trotted right by me and then veered toward the edge of the woods. There is a single narrow path that follows that edge of the woods where deer go in and out of the woods. 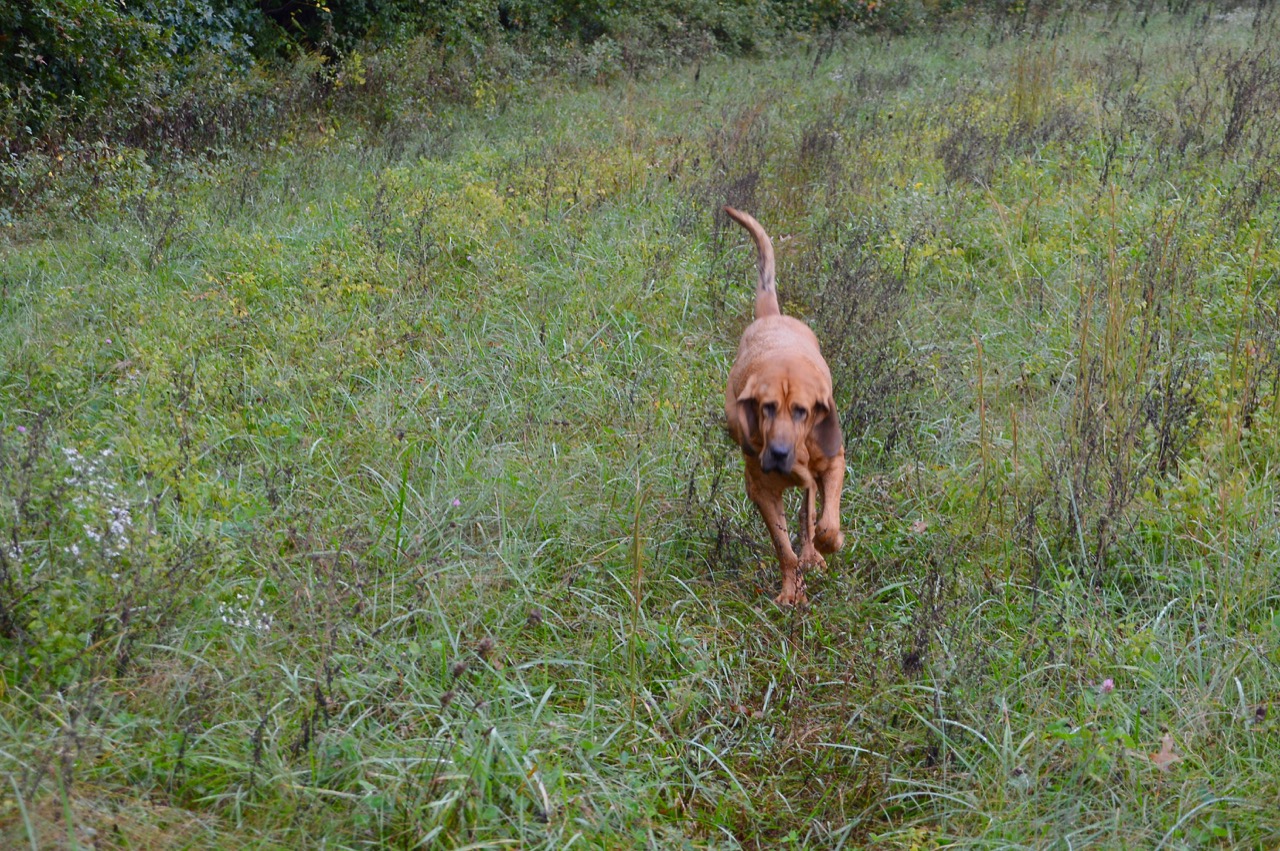 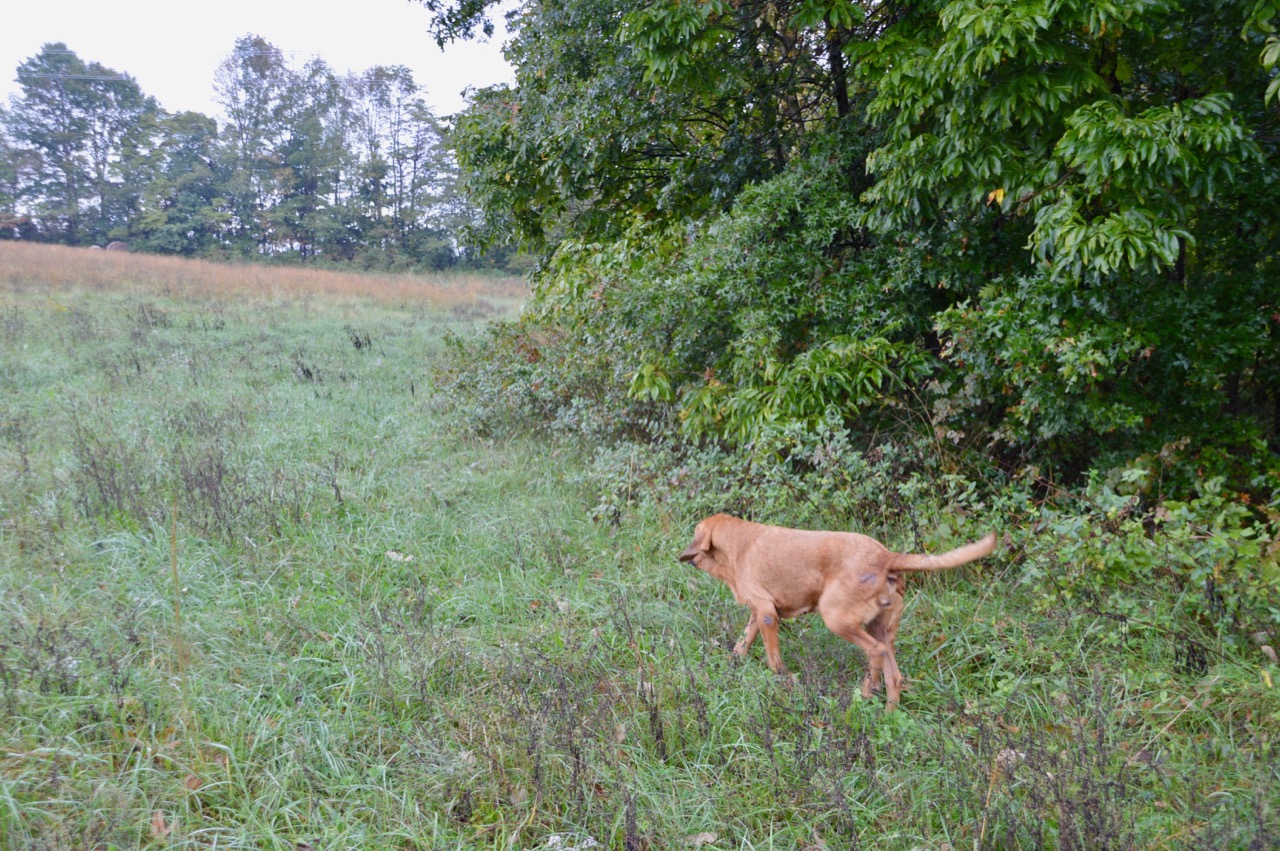 By this time that misty air was turning into a very light rain, so light that I would not call it rain but it was more than a heavy mist. That didn't bother Stella, she kept marching on. 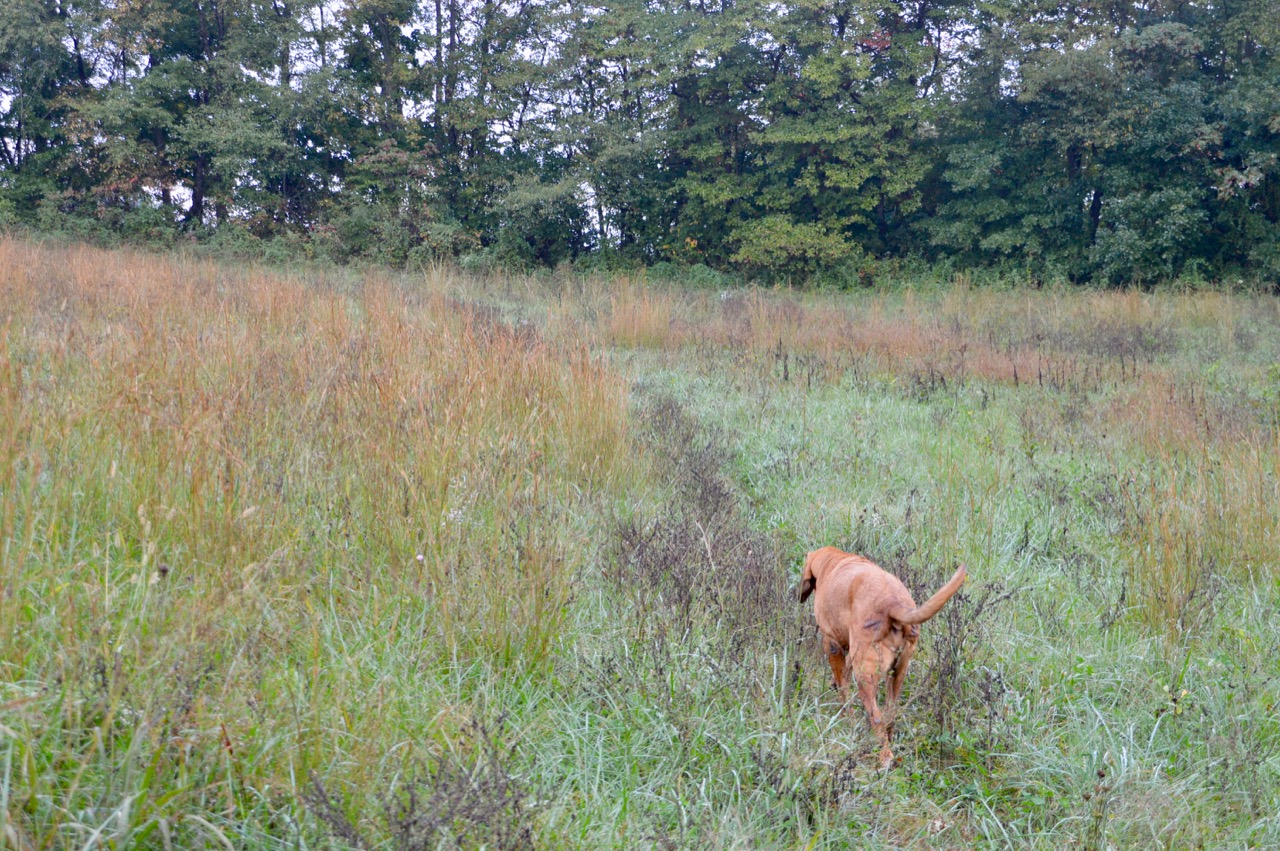 If you look close there is one of those paths I talk about that veers right from our path and heads to the 'far right corner' of the field. It's the mashed down grass that is behind her. She stopped when I told her to "come on". It was too wet for me to be walking through the tall grass to go get her. I was glad she turned around. 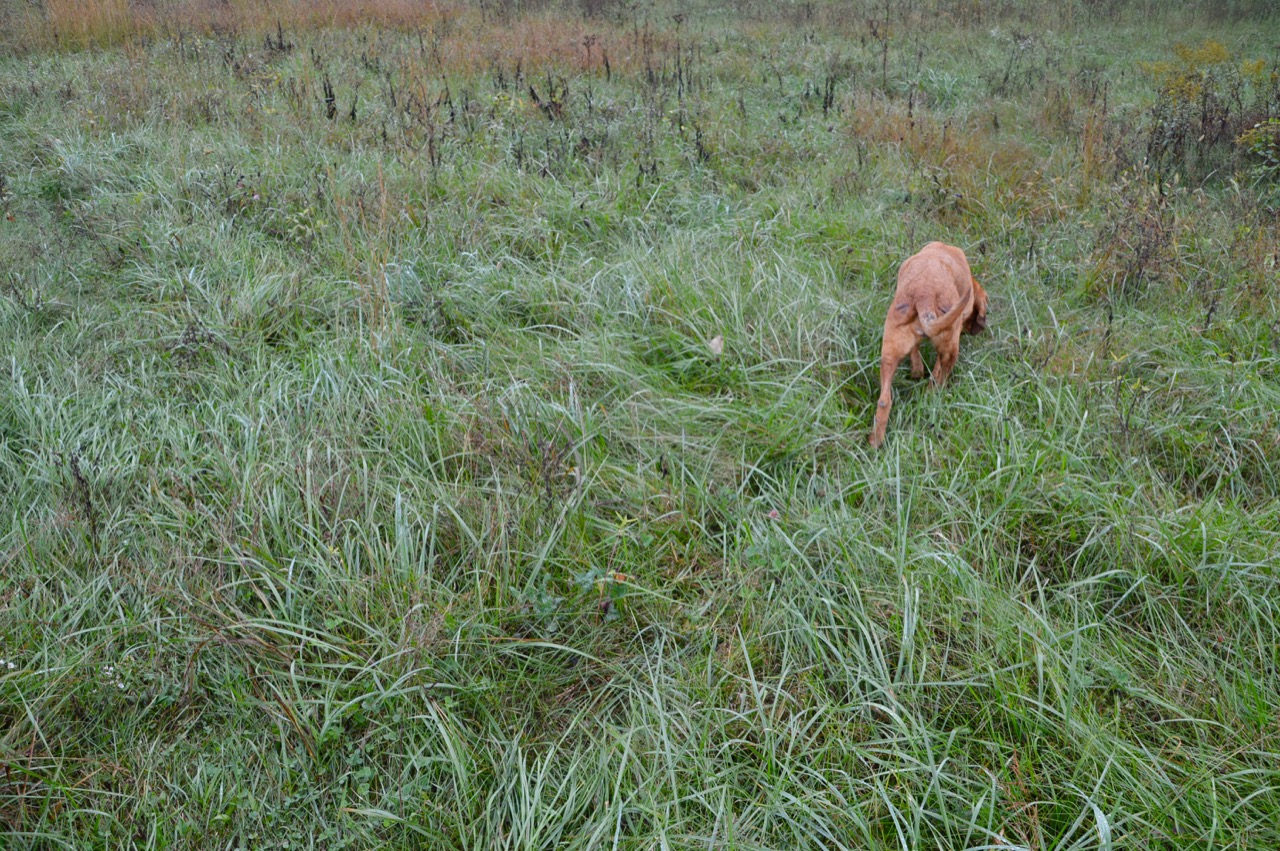 She trotted back toward the path and never stopped. In fact she never veered off the path that passes the two rolls of hay and runs parallel to the back edge of the field. She went into a slow walk to make the left turn towards home and I am nowhere near that corner. 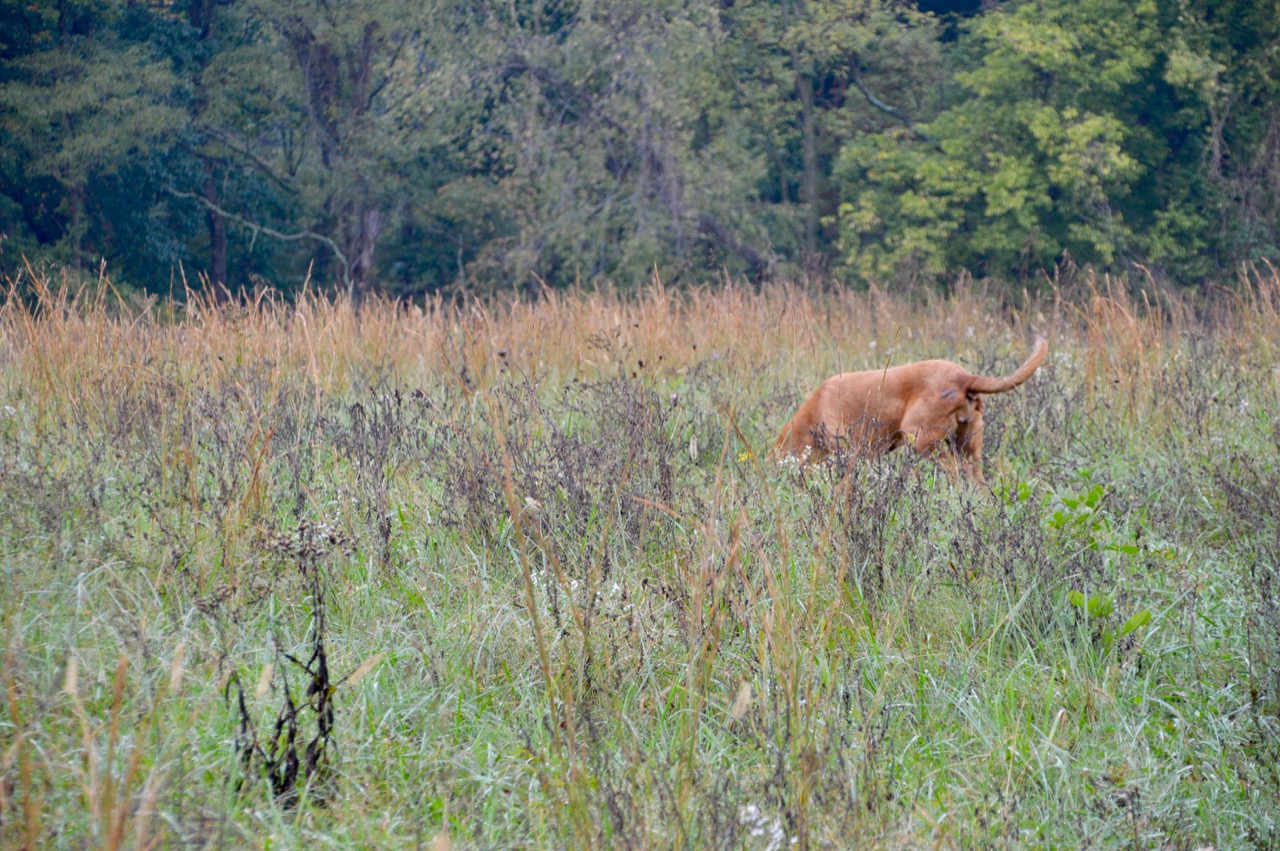 I would pay any amount of money to know what she hears or what she smells when she stops and looks like this. 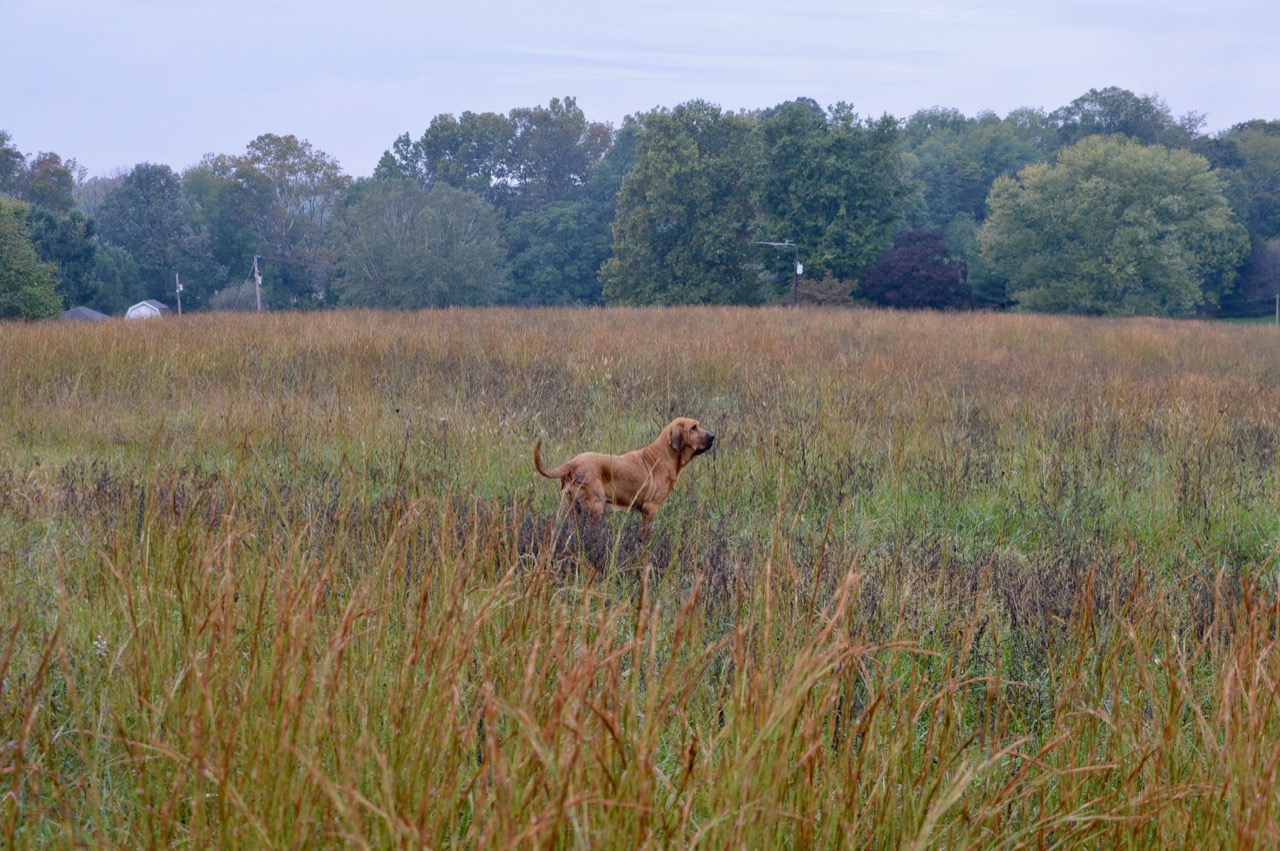 While I follow the path ... she continues over on the old ATV path, where Heidi was walking the other day. 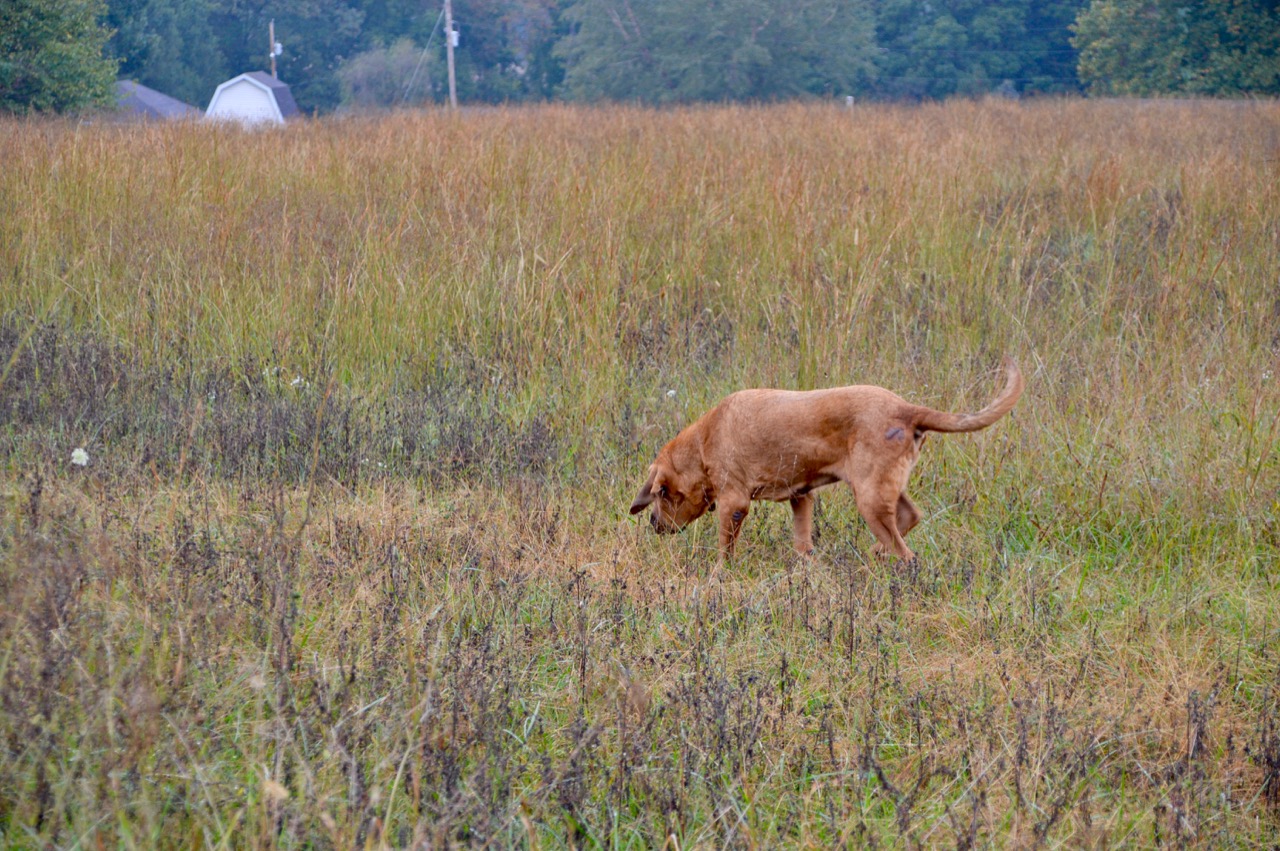 You can see this overcast light rain weather is set in for the day. As long as it's not cold I don't mind a day like this on occasion. Looking at the trees in the distance I didn't see much change in the leaves turning color from last Sunday. 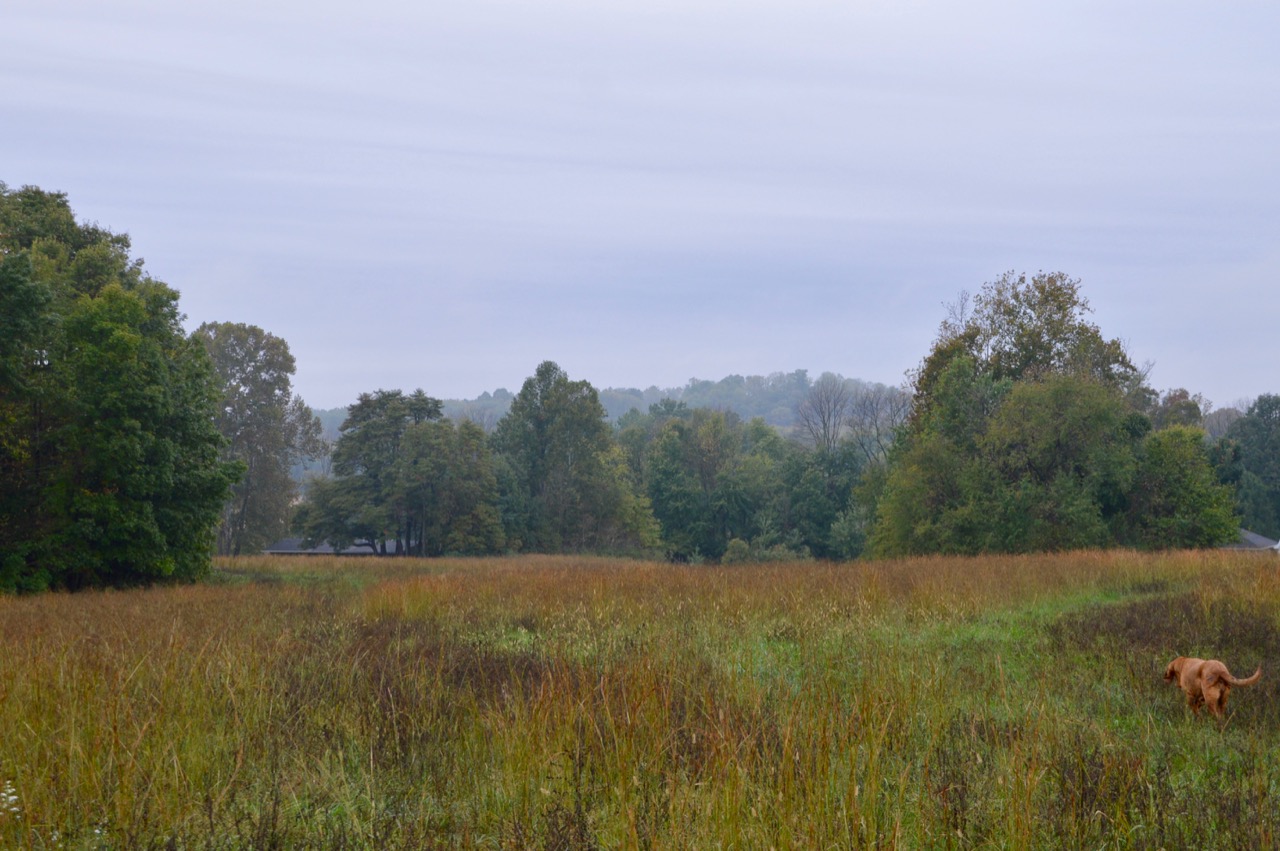 I was never close to Stella on the way home. She stayed out front and trotted away from me a couple of times. There is one area she wants to get to before I get there telling her to move and I think that is why she is always trotting in this part of the walk. 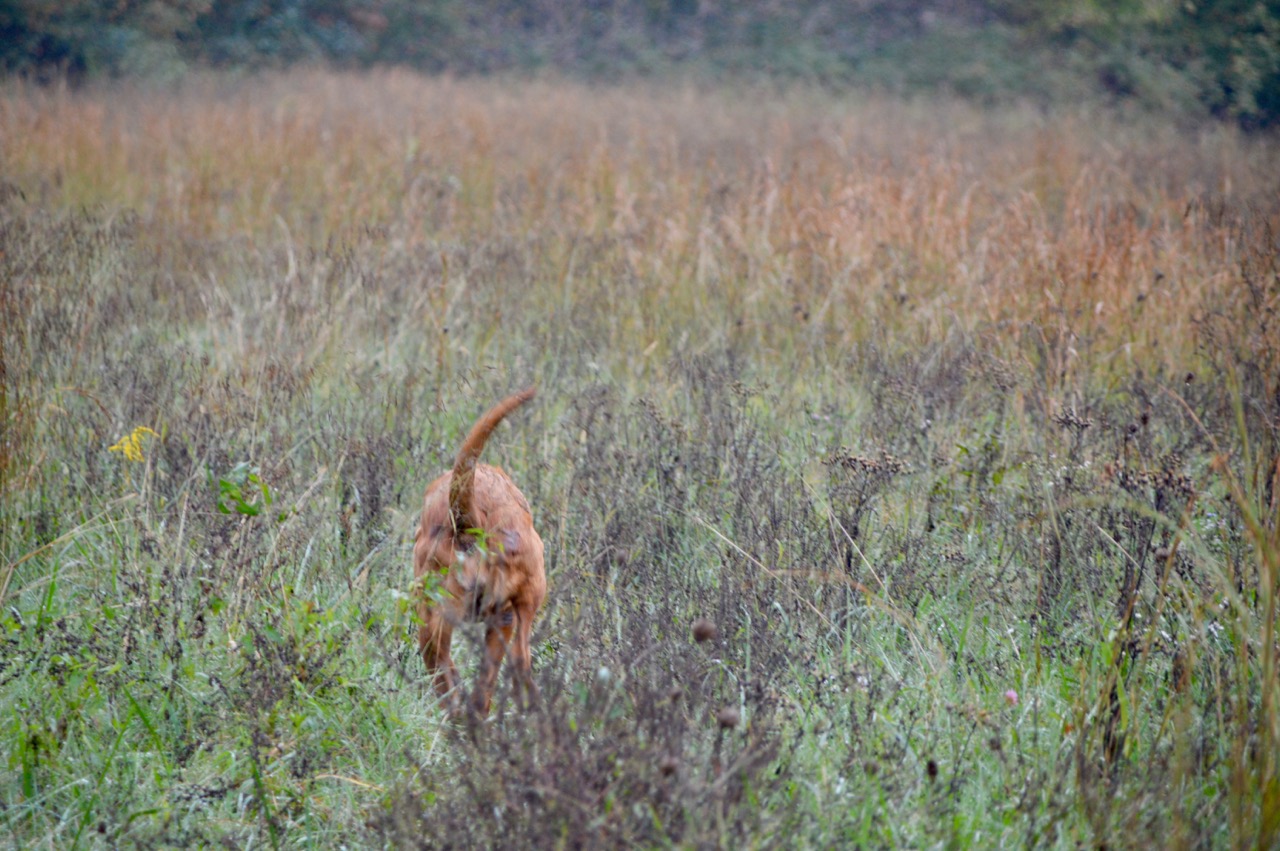 I stopped to wipe some rain drops from my camera. It took no more than a minute. When I looked up I didn't see Stella anywhere. How could she disappear so fast??? 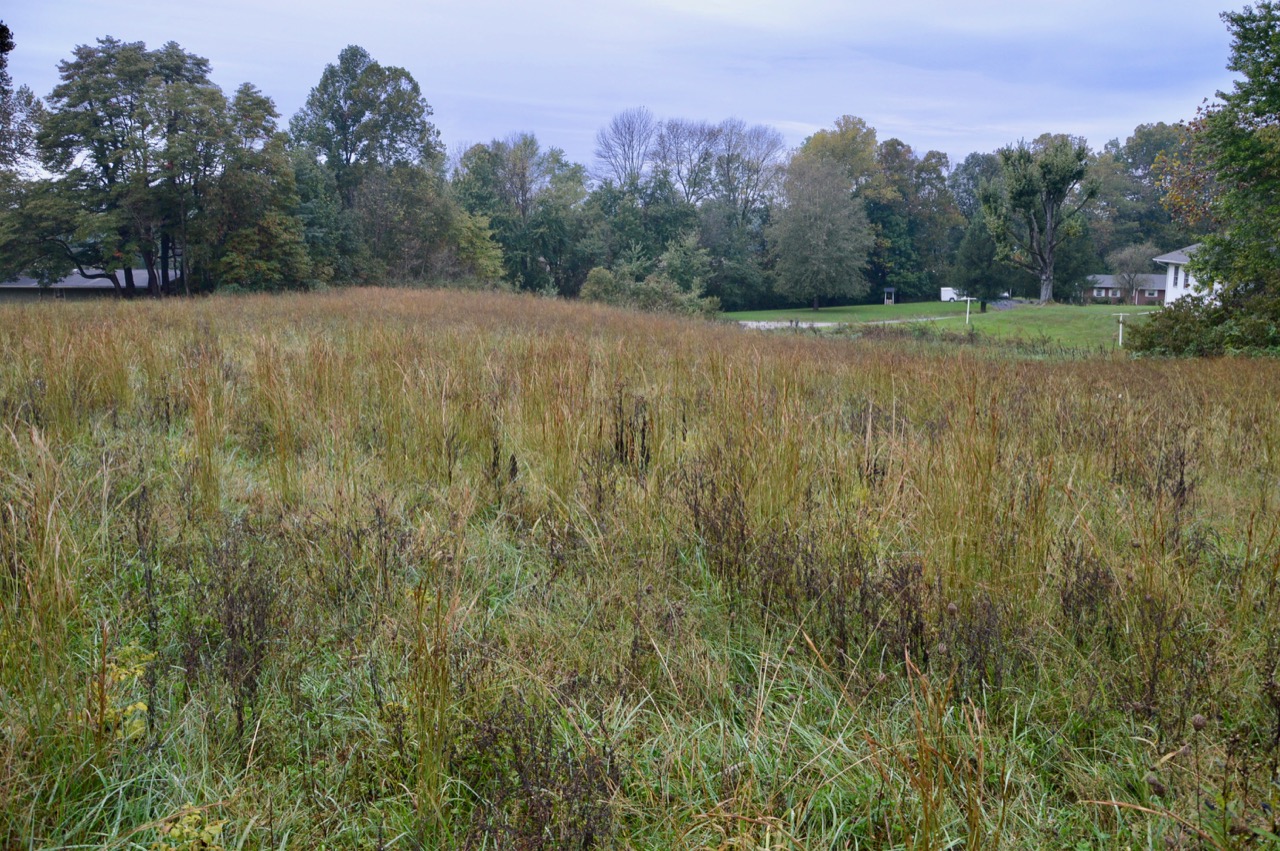 Zooming the camera lens closer to the neighbor's woods I still don't see any sign of a tan tail, which is hard to see now with the taller straw that is also tan. About the time I was going to get my jeans wet from that tall grass by walking that direction .... 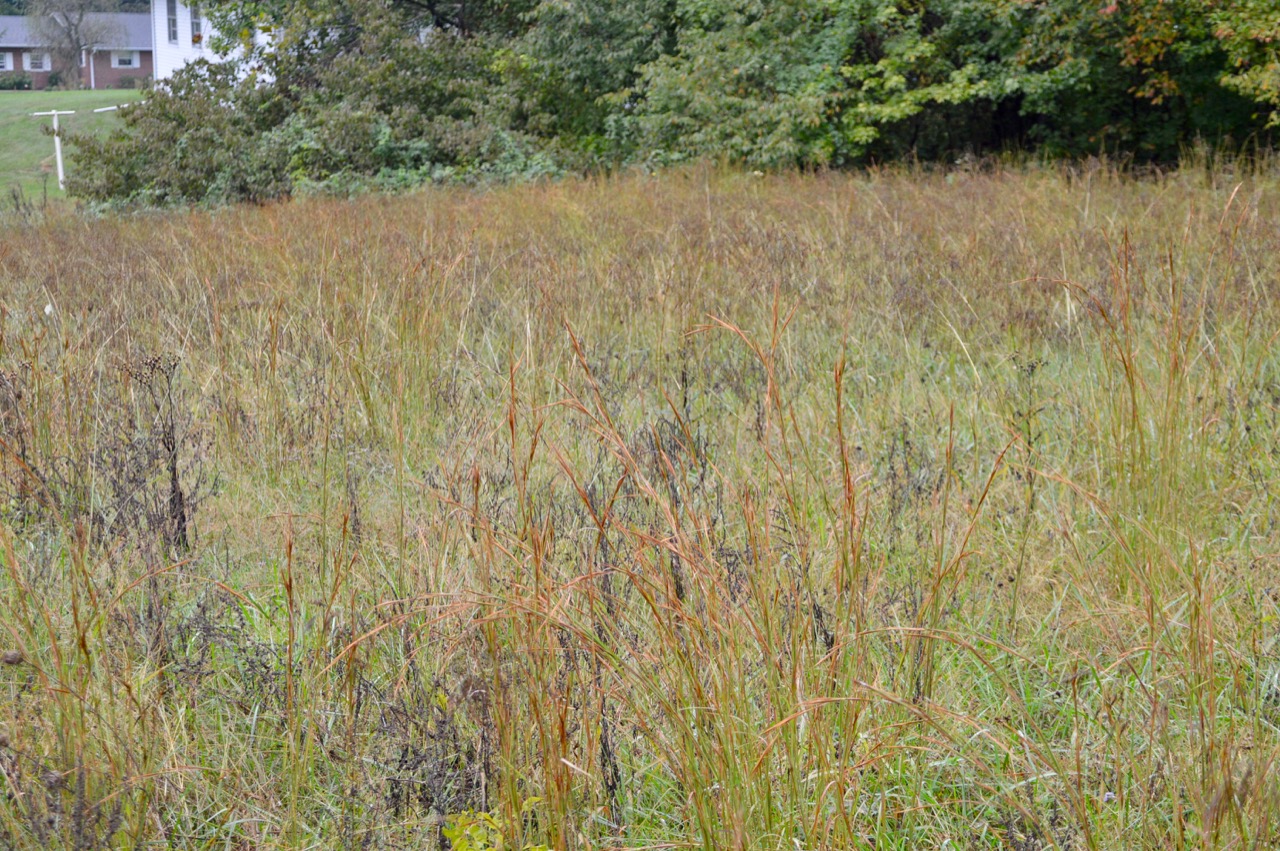 I took a final scan of the field and barely caught Stella to the left of me .... 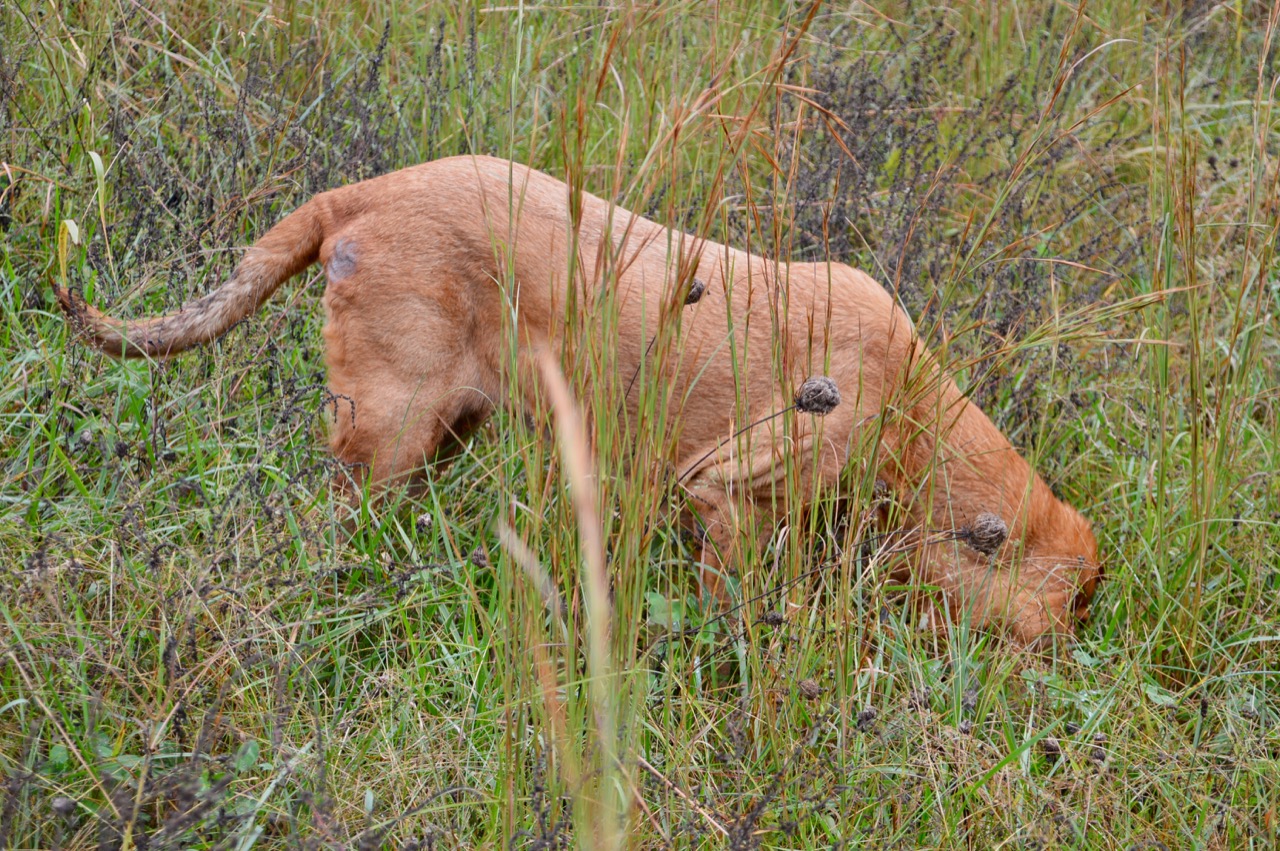 She finally agreed it was time to get home and jumped back on the path. 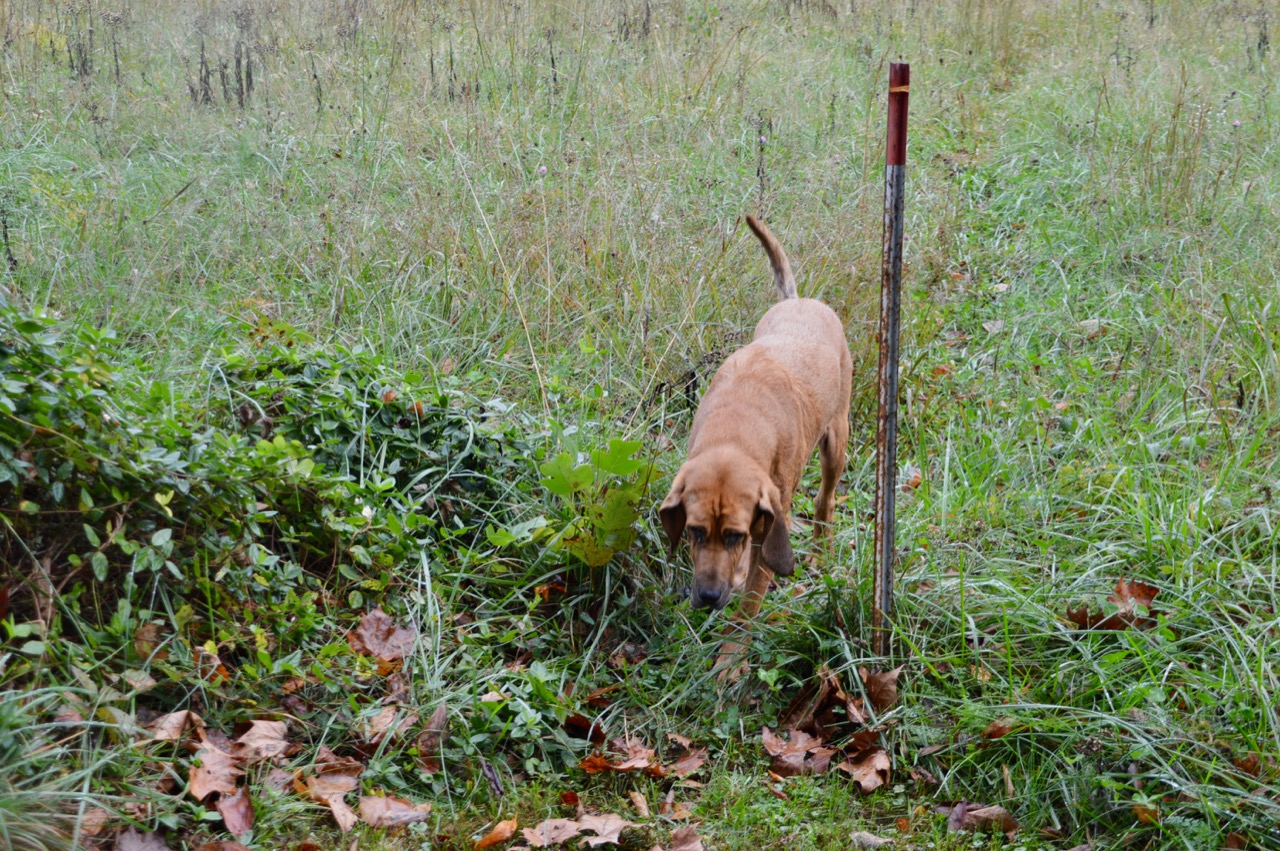 There was nothing to see, no sounds out of the ordinary but she was very curious about what was happening toward the highway. She might be smelling a scent that is in the field across the highway. This time of year the deer traffic increases, not on the highway LOL but crossing it from my yard to the field or vise versa. 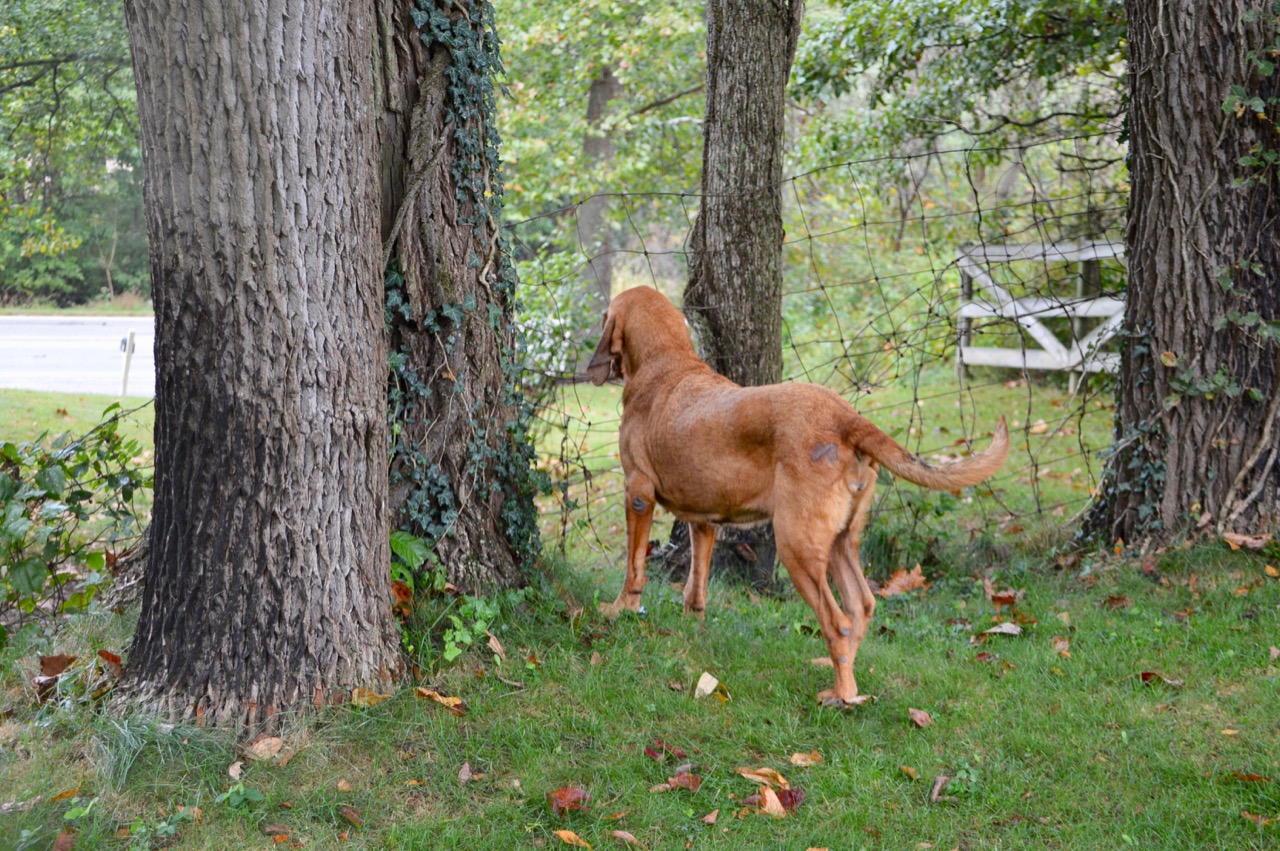 Heidi continues to be more active than she had in months. She comes to get me to let her outside more times during the day. A lot of those times she will do nothing more than find a sunny spot and sit in the front or back yards.

This morning she decided the two fleece blankets I washed yesterday, didn't need to be on the couch but on the floor, where she could sleep a little before lunch. It took some time for her to drag them off the couch into the perfect positions on the floor. The clothes dryer collects a lot of dog hair from all the fleece and Mexican blankets, but the hair is hard to remove from the fleeced ones. 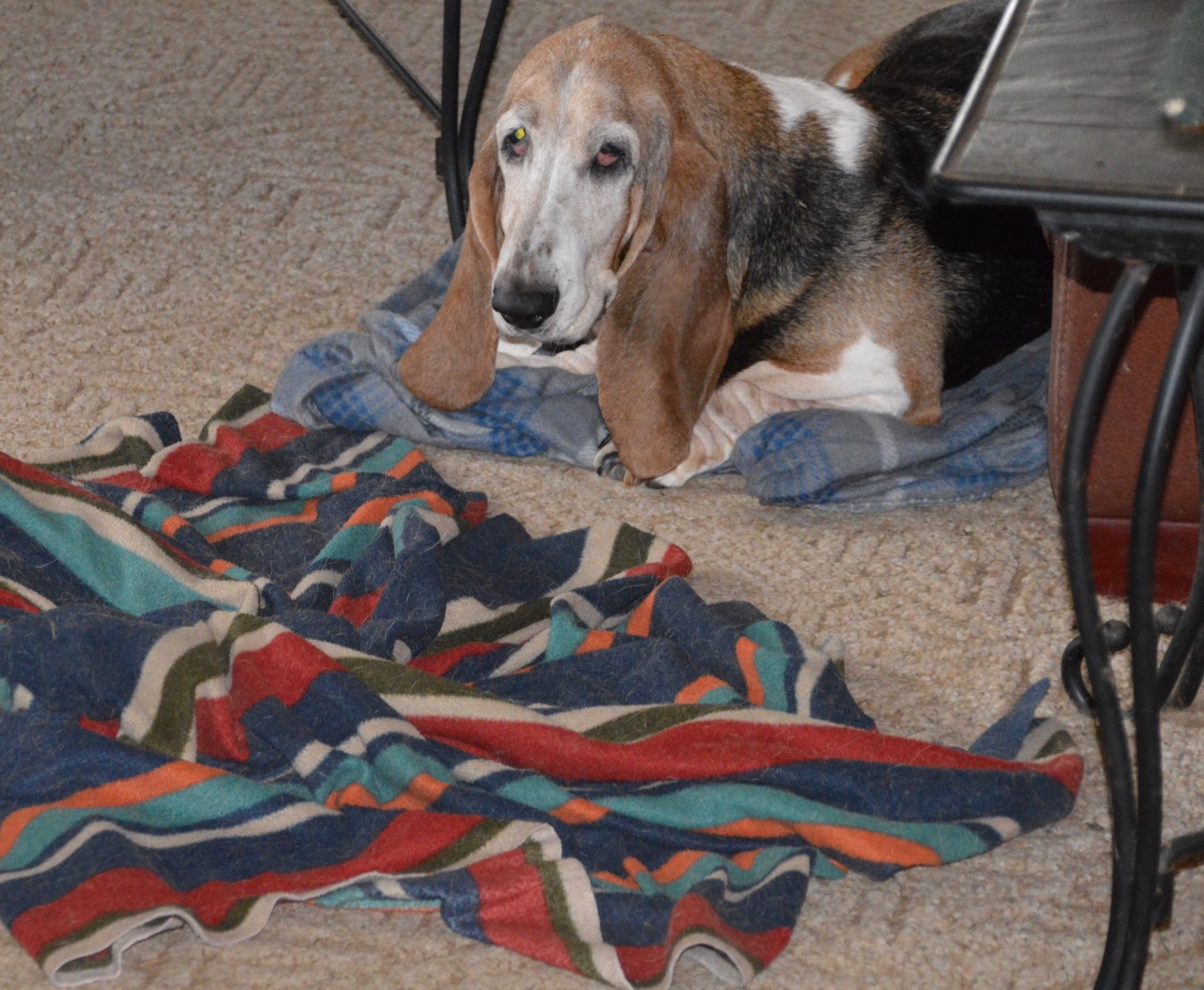 With my loss of interest in the NFL games, I'll finish another book today and start a new one. Neither Stella or Heidi was too enthused to do anything outside after lunch. Heidi took a lap around the house and Stella never left the carport. 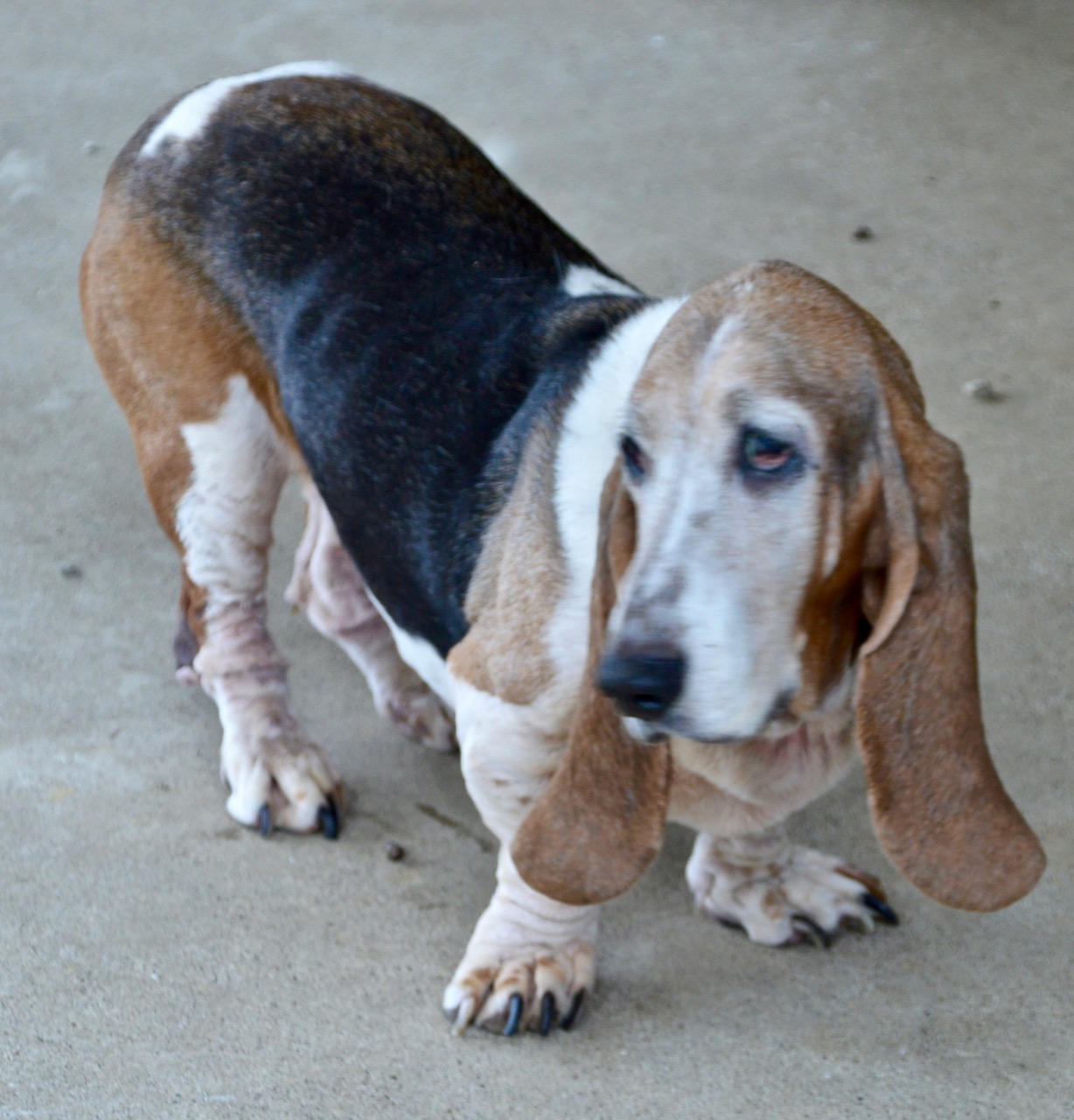 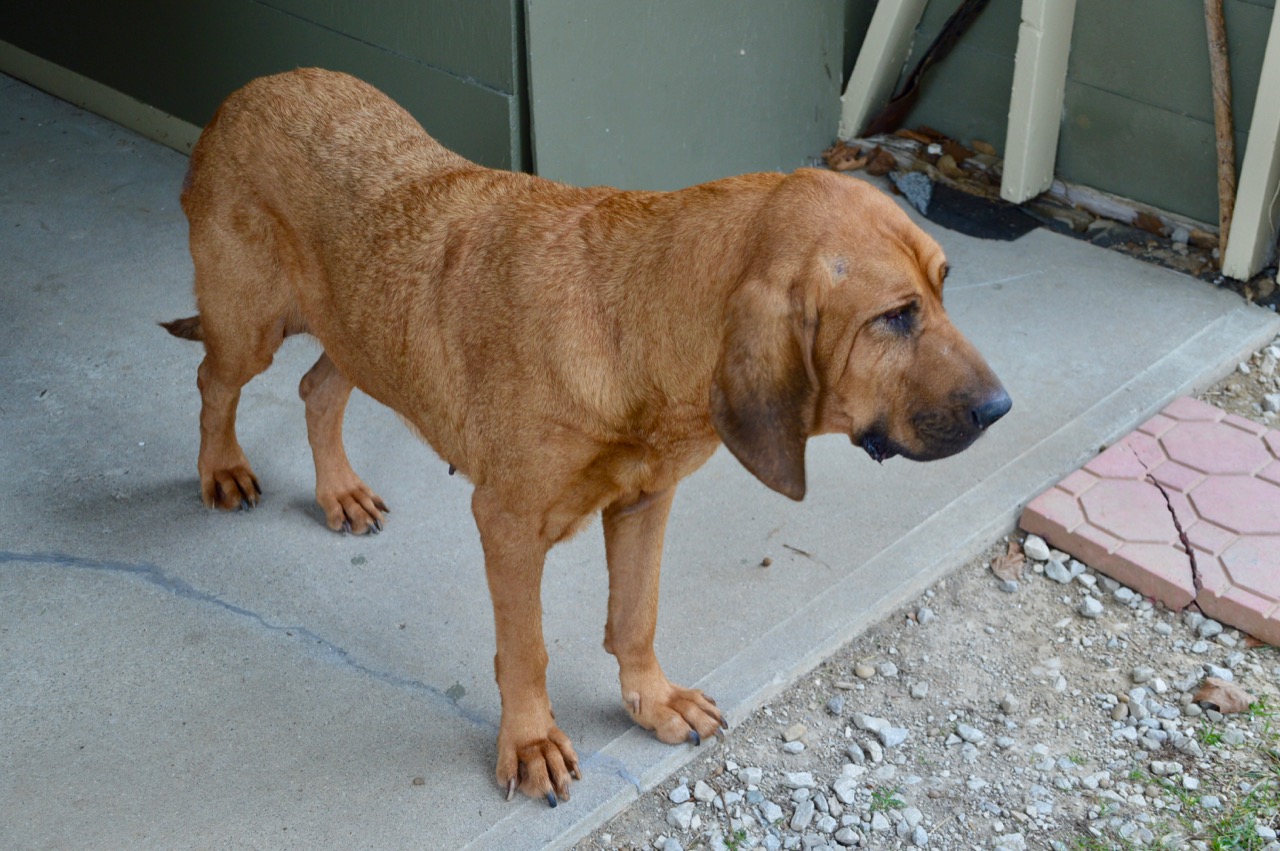 Not raining but still a little cool. I contemplated whether to take a trip to see an old friend today. At the time I wrote this post I wasn't sure what I was going to do today but felt the urge to do something different. I knew the hounds were going to sleep all afternoon and it looked like the rain had moved on with no more expected the rest of the day.

It looks like I might be raking leaves this week. A little at a time instead of waiting until the end with a major project on my hands. There is always hope that strong winds will blow them out of the yard to make my raking job easier.

A 'non-eventful' day here in 'the tropics' of  Southern Indiana.
By Steve at 2:30 PM