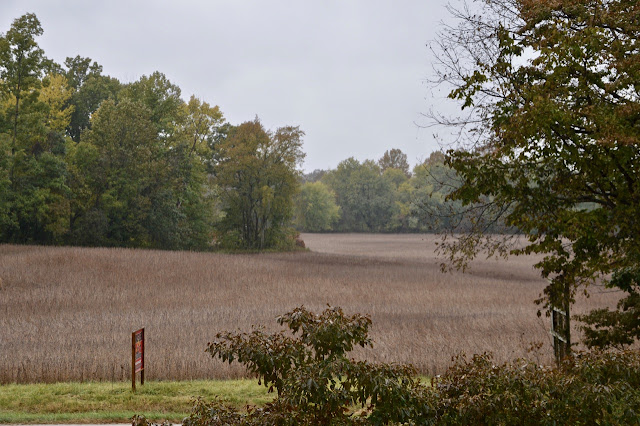 The forecast showed the rain would start after we turned off the lights for the night. Later I could see the reflection of a wet highway as I stood in the middle of the dark kitchen drinking ice water. When I opened the door for the first time to let the hounds outside, I could hear it but couldn't see it. Hours later, almost 11am, it was the same ... light rain ... nonstop.

It was good that I cleaned gutters early in the week. I have only three downspouts for the front and back of the house and of course with the trees I have, all of them are plugged with leaves and stems. I do have the metal spout plug-ins to prevent them from clogging my downspouts. 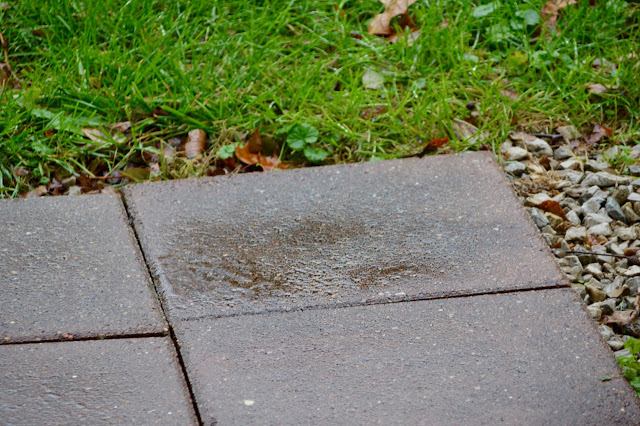 Is that a little color I see this morning? It is different than green but not by much. If I remember right, I read in this blog a year ago that by now all the leaves had fallen and I had raked multiple times and burned them. So far very few leaves have dropped to the ground. Does this mean we will have a different winter? 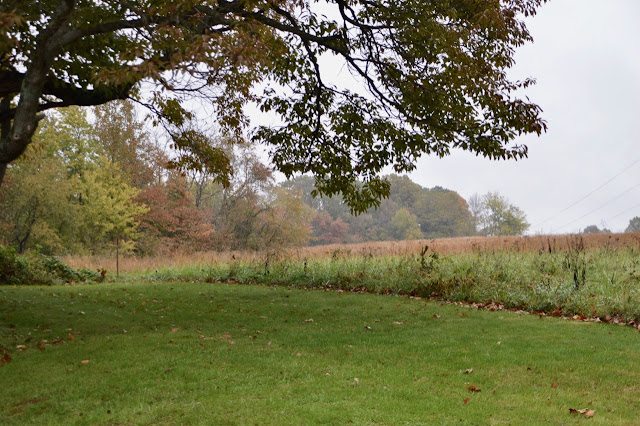 Stella never whined around 8:30 to 9am to go on the walk. She was in a deep sleep behind my desk chair from the time she finished breakfast until I went outside right before 11am. As you will see, she didn't get far either and seemed a little confused in what to do and where to go.

She is back to sleep right behind my desk chair as I type this. Heidi??? Where do you think she is ... buried deep inside the sleeping bag with no plans of waking up until she is hungry for lunch. Although this rain today seems to have messed with the normal schedule. She is usually barking for lunch by now. 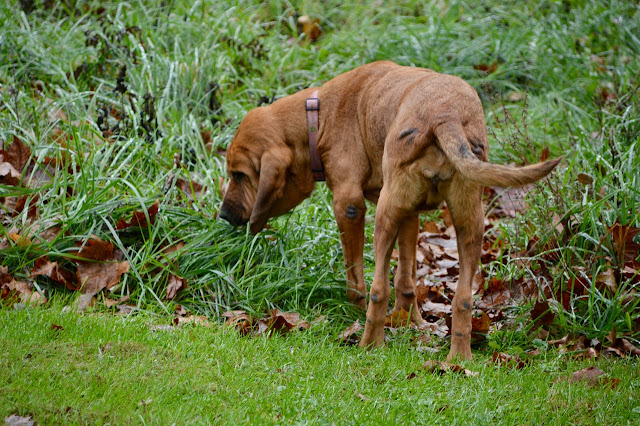 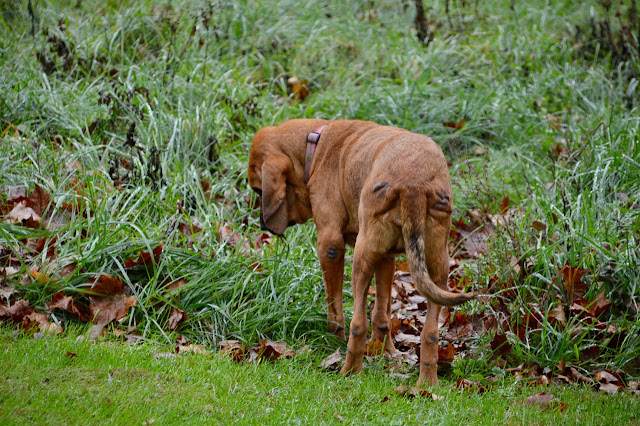 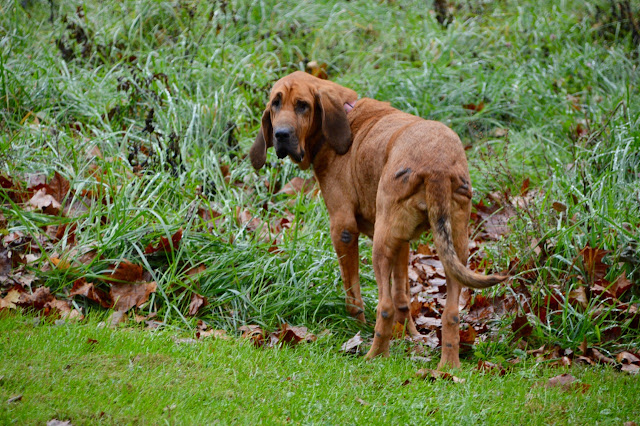 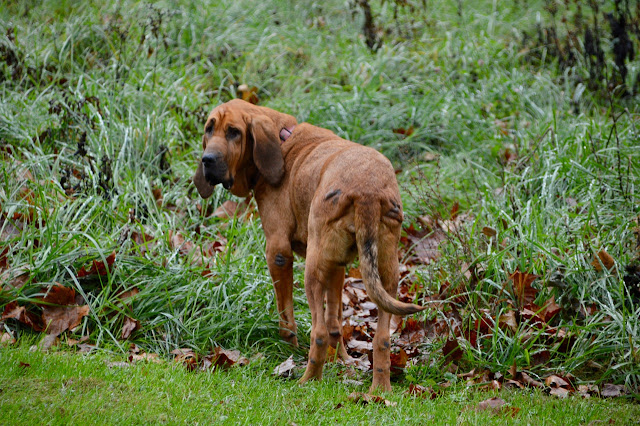 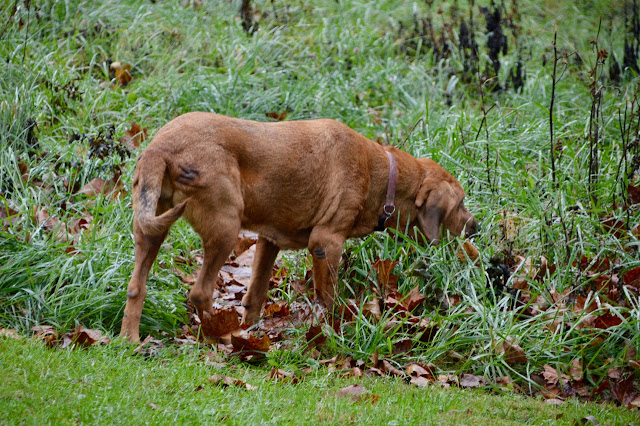 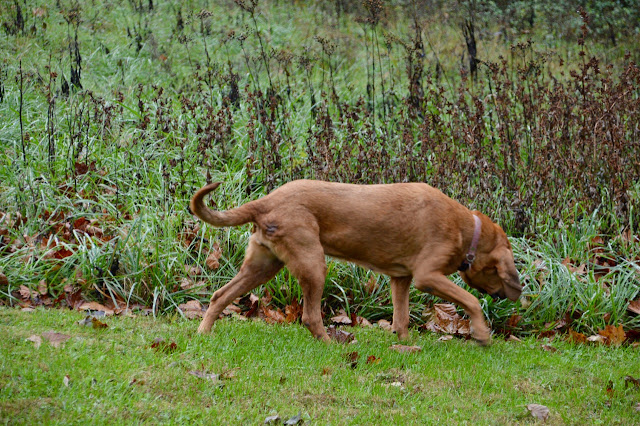 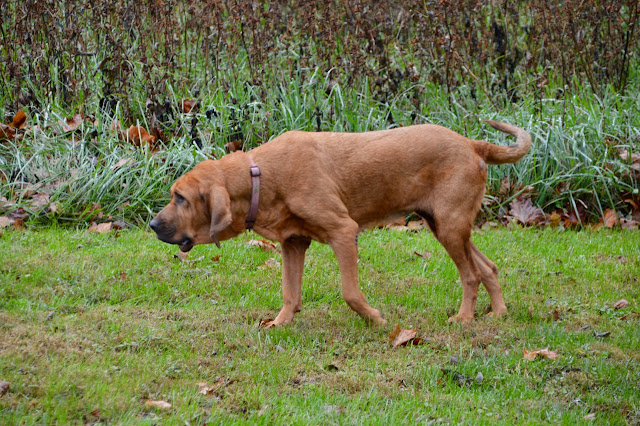 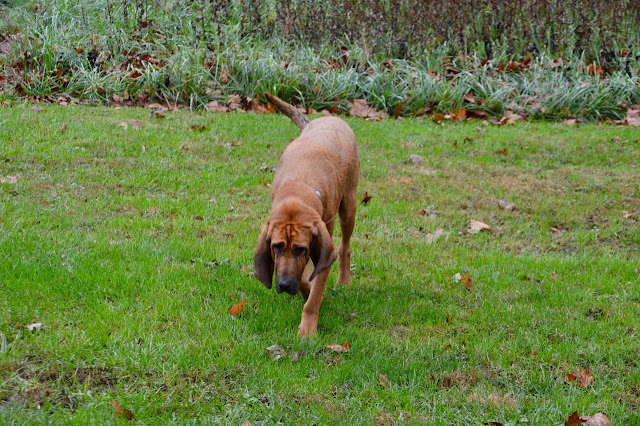 It must be the way I hold the camera ... off by a few degrees. Those steps do not angle back toward the house but are straight and flat. I should have paid more attention when I was editing. 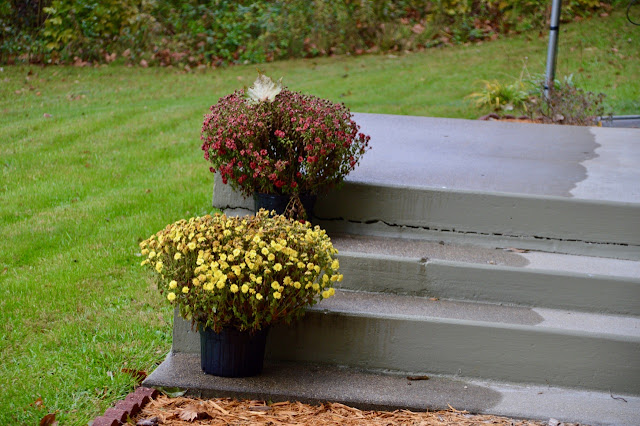 I mentioned the other day about the great photo editing tools that come with the Apple Photo program. Most of the time I just click that 'yellow' wand next to the 'Done' key. I might click the 'Definition' and/or 'Sharpen' links.

I don't go deep into the details but you can see they cover about every possible editing tool for photos.

The photos I have taken the past two days have changed I think into a better quality photo because I found that one setting off in set up. Once I clicked the setting for using a telephoto lens it made things much better in my eyes.

Remember when I tried using my iPhone without out a case? That worked out pretty well until the temperatures became colder. The cold temps and the glass back of the iPhone 8plus were not a good combination with my fingers.

So I used my $40 cash awards from Best Buy to buy a Speck case just like I had that has small rubber ridges for an easier grip. I have never used a screen protector on any of my handheld devices all the way back to the old Palm Pilots many years ago.

I wasn't a fan when Apple changed it but I work with it ... there 2015 build of the iMac moved their SD card slot to the back of the monitor. The card slides in at a slight upward angle. Recently I thought that slot was wearing out because it would not read the card.

If any of you may have the same problem of your SD card not being read in any form ... buy a new card. When I bought the second SD card for the Canon Powershot SX530 I was trying out a few weeks ago, I found that card was read every time I slid it into the slot on the back of the iMac.


I could send all of my photos from my camera to the computer on the cloud but I only have 5Gb of free storage on Apple iCloud and the setting turned off for it to manage all of my Photo Library which is now over 30Gb in size. So I do it the old fashion way of sliding the SD card in to the computer to transfer photos.

I picked up a couple of books yesterday at the library that I cannot put down. I was up past 1am last night reading. One is a three year old book and I am not sure how I missed it when it came out, printed in 2015. Adios' America by Ann Coulter. It is a fast read and explains a lot of things about the immigration problem, where neither political party wants it fixed.

The other is a new book named Pence - The Path To Power by Andrea Neal. Since I am a sports addict and was never interested in politics until the last 5 years I did not know a lot about this man even when he was the Governor of the state I have lived in the past 23 years. I was curious enough to pull the book off the shelf so I had a better idea how a man from a town of 20,000 people, a college graduate from a very small school of 800 students could rise to being the Vice President.

At the time it was rumored he would not even win the election for Indiana Governor at the time he was named Vice President. That is a slower read but very informative.

You will now see Heidi's strategy in staying dry in rain or snow. She perfected this method years ago in 2011. Stella never took two steps away from the carport steps so she still waits for the rain to stop sometime this afternoon. 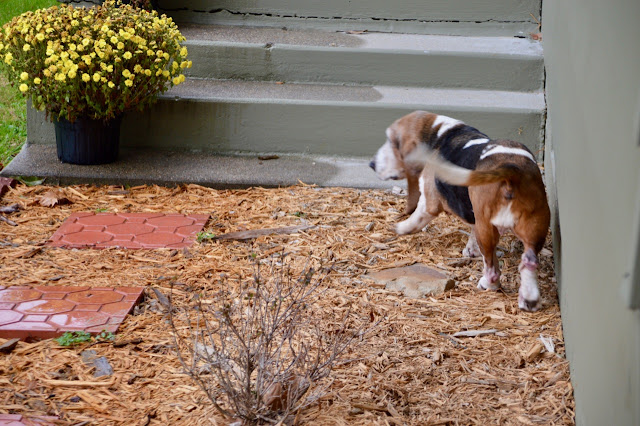 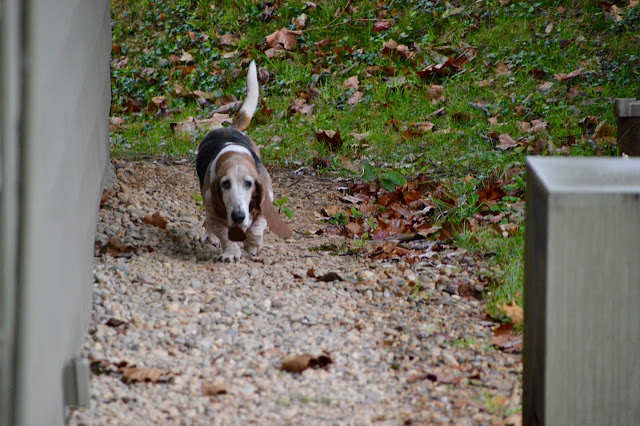 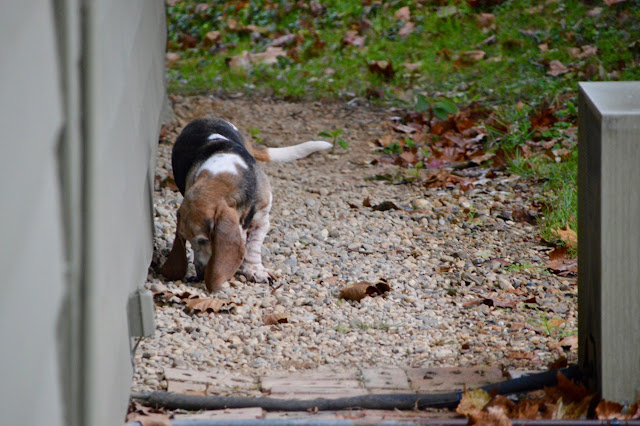 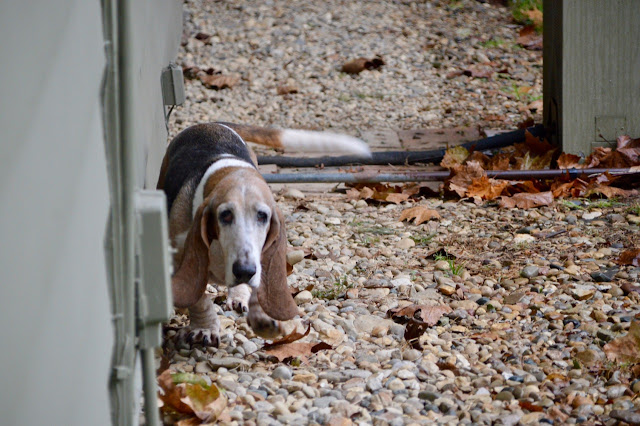 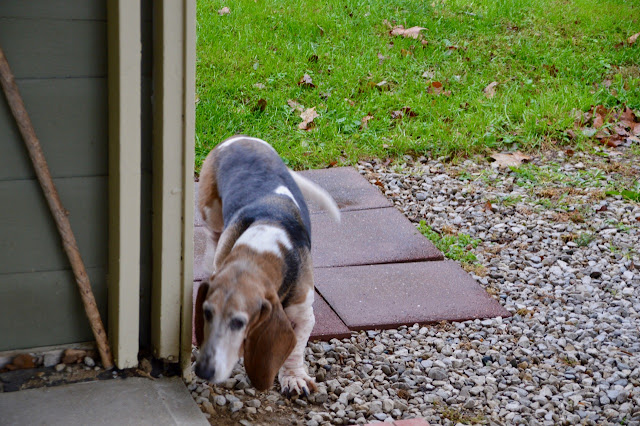 One a side note ... I know anytime a number is less than 10 it should be spell ed out. I prefer seeing the actual number and find it easier to see as the content is skimmed over, most likely.

A rainy day in 'the tropics' of Southern Indiana ... but college football tonight to watch so all is good.
By Steve at 8:57 AM