Stella Has Changed Since Sadie Is Gone 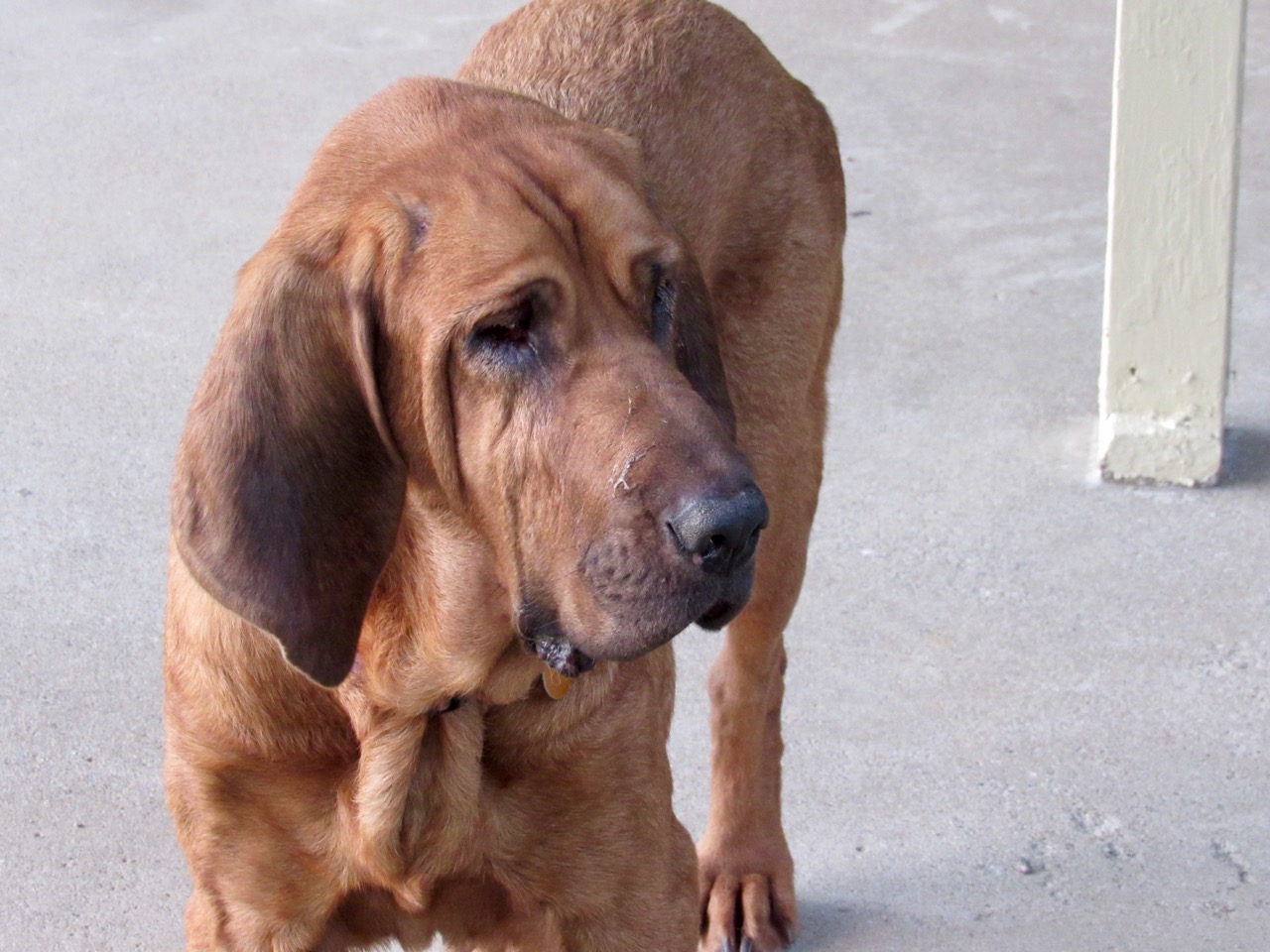 Stella's changes have been subtle since Sadie left us on September 15th. Yet, they have been noticeable. There is nothing that she is doing bad or getting into trouble, really the exact opposite. I don't think it is because of Sadie but maybe having a second bloodhound around that made her a little different. Both of them wanted all the attention, get their food first, be the first outside and the biggest ... wandering off next door or out into the field alone while I was busying working outside around the house. Who knows, maybe it was Sadie who got Stella to wander off on her own? 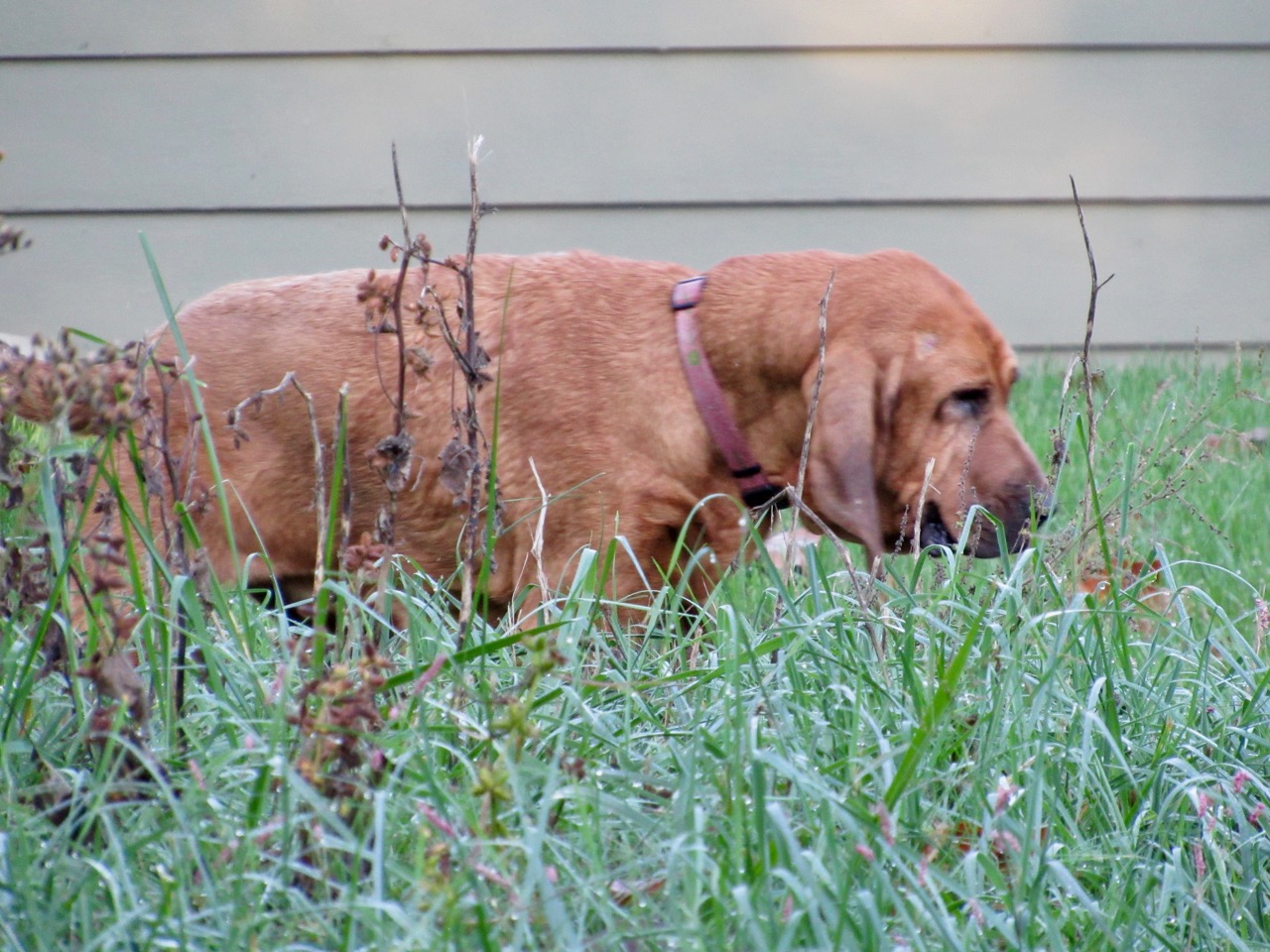 That most noticeable thing is Stella has not gone out into the field alone since Sadie died. She has not even thought about wandering over to the neighbors yard and she has had her chances. Even in our walks for the past three weeks she has not tried to wander off and if I say anything to her she will always head back to the path we take. Like today I left her outside while I mowed the yard and cut weeds. She spent most of the time on the carport floor watching me and did walk out into the yard while I was cutting weeds along the bank ... but never took a step into the field to go explore. She spend over an hour and a half outside with me and never disappeared. 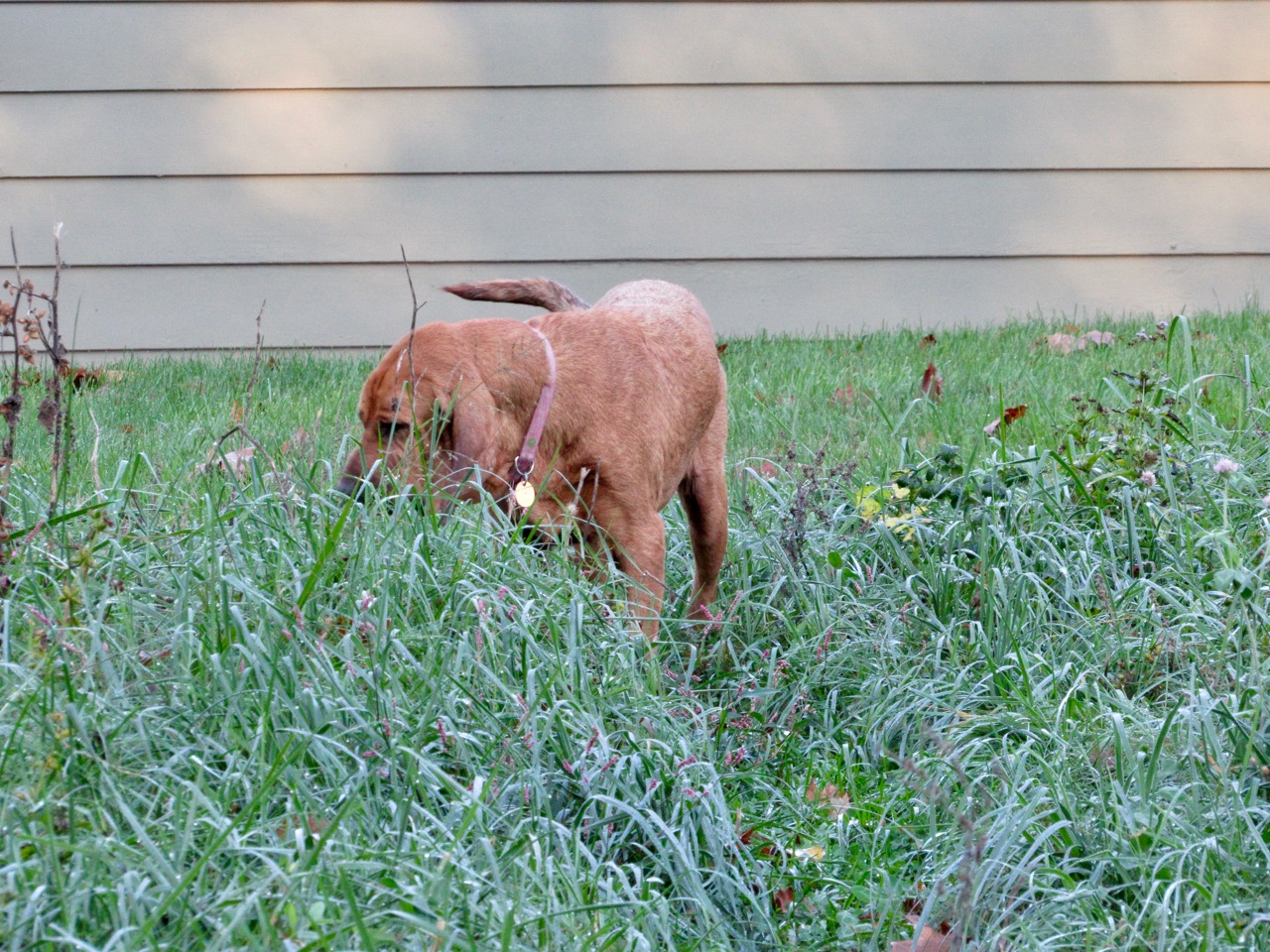 She also spends more time following me inside the house. She doesn't do that a lot but does follow me more these past three weeks than she did before. When I am editing photos or blogging she is always asleep beside my desk chair. If I am washing dishes she is laying on the floor right behind me. If I sit outside she doesn't leave the carport. She doesn't go to the front yard and will watch my every step to and from the mailbox. If I am sitting on the couch reading a book or watching a ballgame, she has to be between me and Heidi. 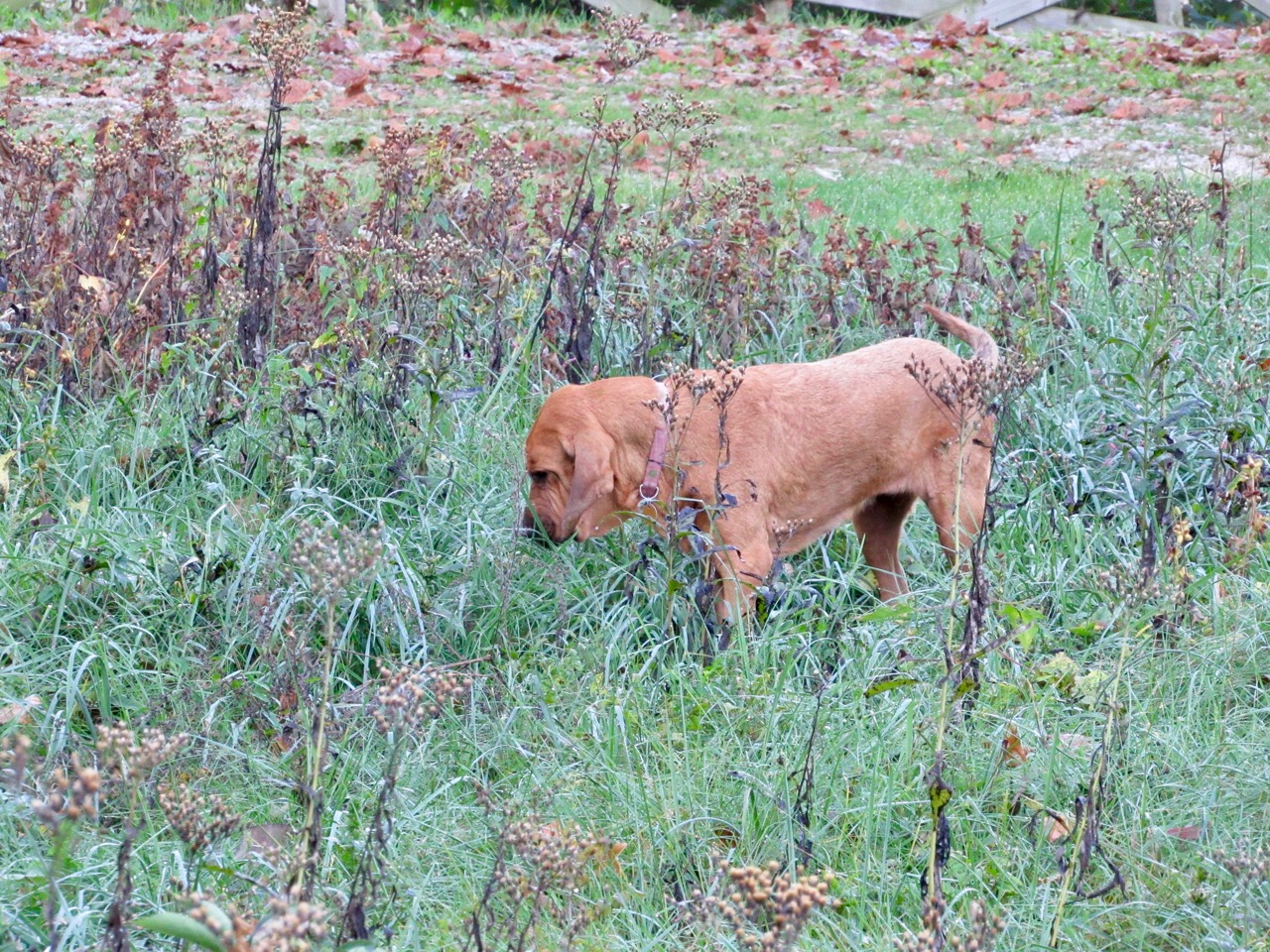 She rarely goes to the door to be let outside. She never barks but will howl when she knows she is going to be fed breakfast or lunch. As laidback as she always has been, it's hard to believe that she is even more slow paced now when she is in the house. She has no interest in chewing bones, playing fetch but she loves being brushed with the hound mitt or the rake that can take out her undercoat. 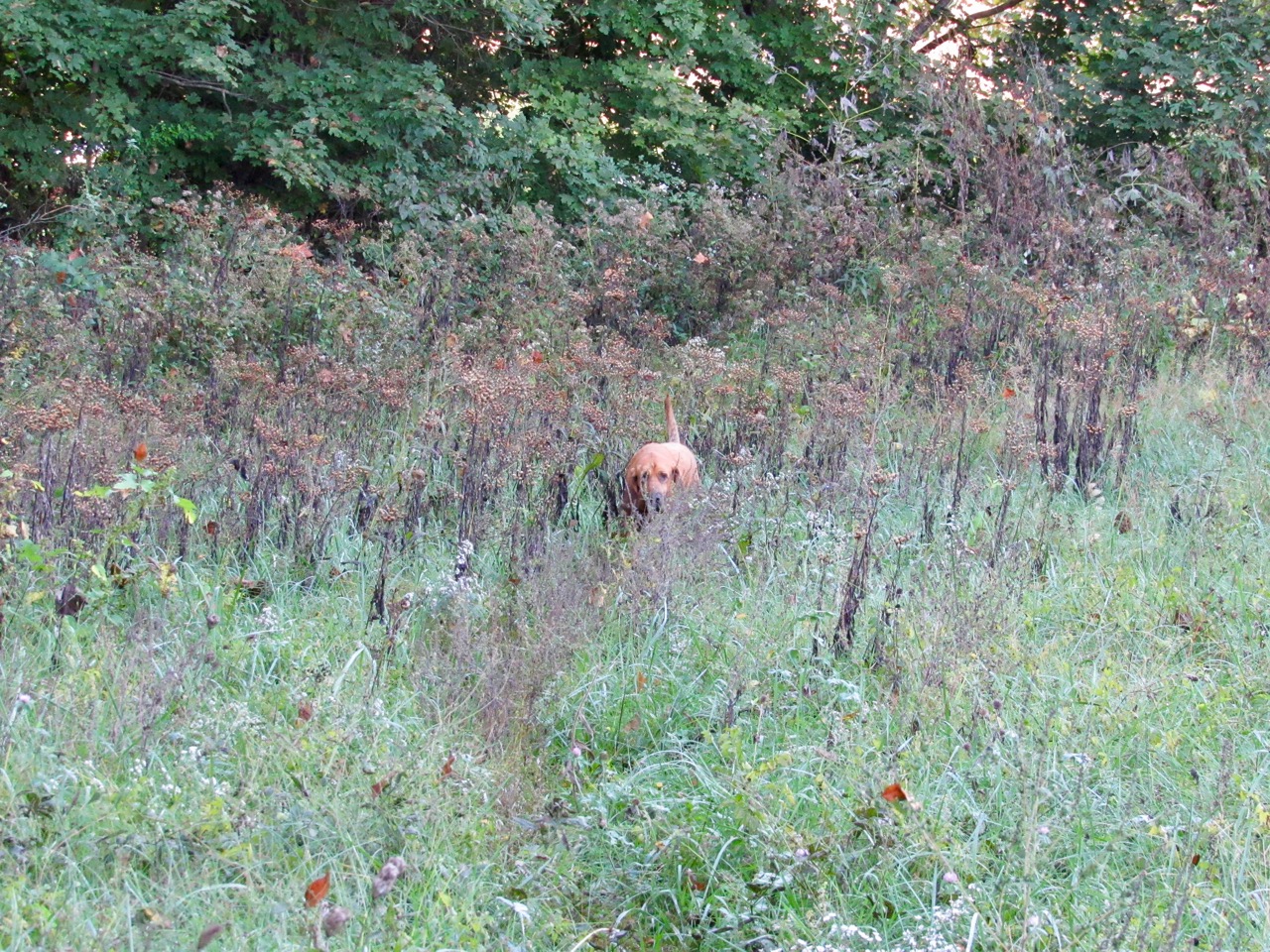 She does like to ride in the car. She goes to the back and waits for me to lift in her in the back even if we are not going anywhere. Dried bloodhound drool is one of the hardest things I have tried getting off automobile paint. It might be harder than removing bugs. I have been gone a few times to buy groceries, the library or out for dinner so she stays in the bedroom sometimes alone and other times with Heidi. With the two windows cleaned a few weeks ago, there are zero smudge marks on the windows that she use to leave by pressing her nose against the window ... a technique she has always used to see if that window or door will open. She does the same thing to the car windows when she is inside. 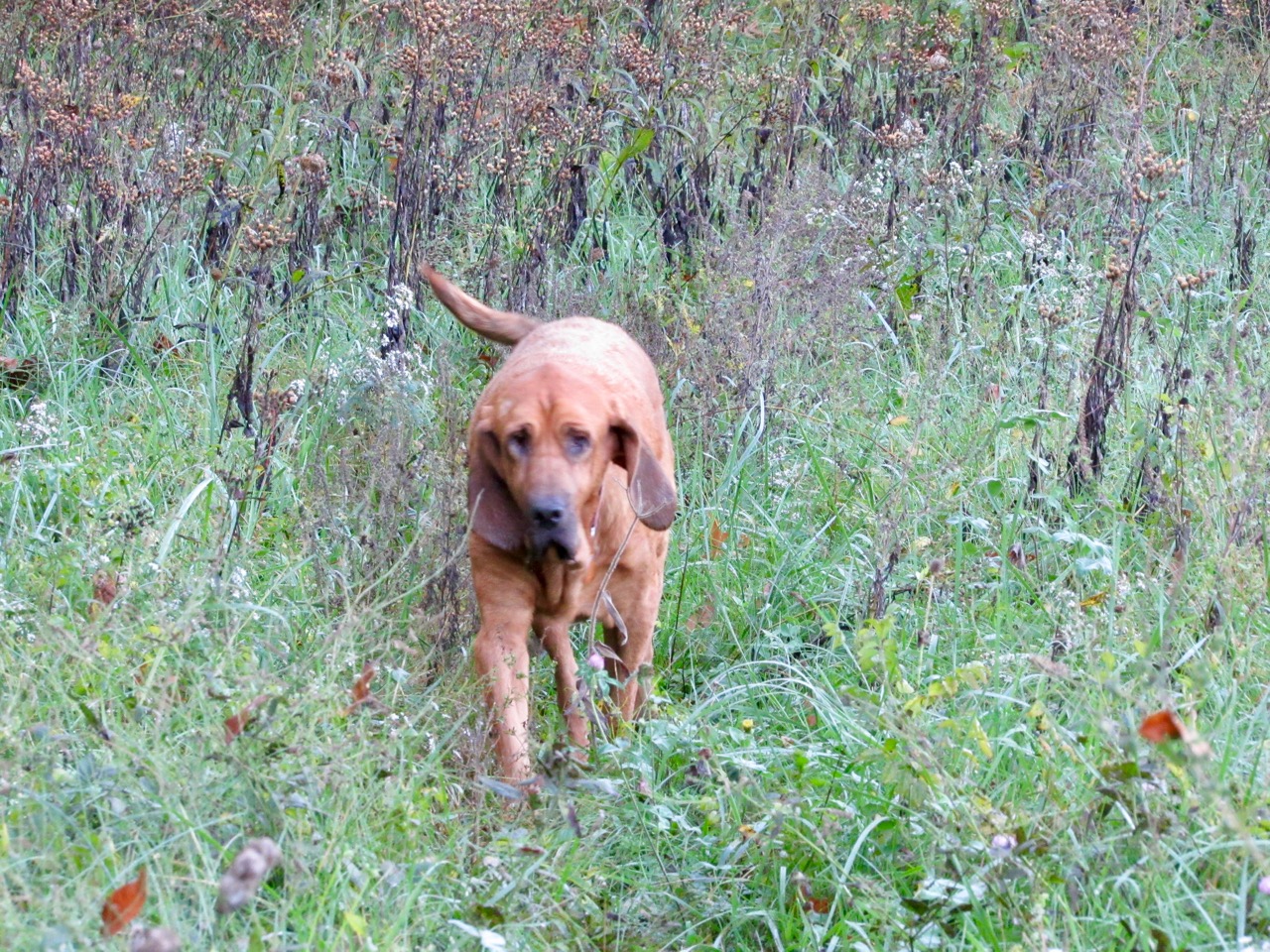 In a way it is quieter around here with Sadie not here. It wasn't that she was a loud dog but she was either wanting to go on a walk, wanting to be let outside so she could roam the field, or checking the dog food dished for that one small piece of kibble that might have been missed by Stella and Heidi. If she did find any in their dishes maybe I dropped some next to the food container. At times she would drag what she could move out of the closet just to check if a few pieces of kibble had bounced further back on the closet floor. She would sit for hours by the screen door looking for the squirrel or cardinal to show up on her fence by the driveway. She always seemed to be doing something when she was awake. 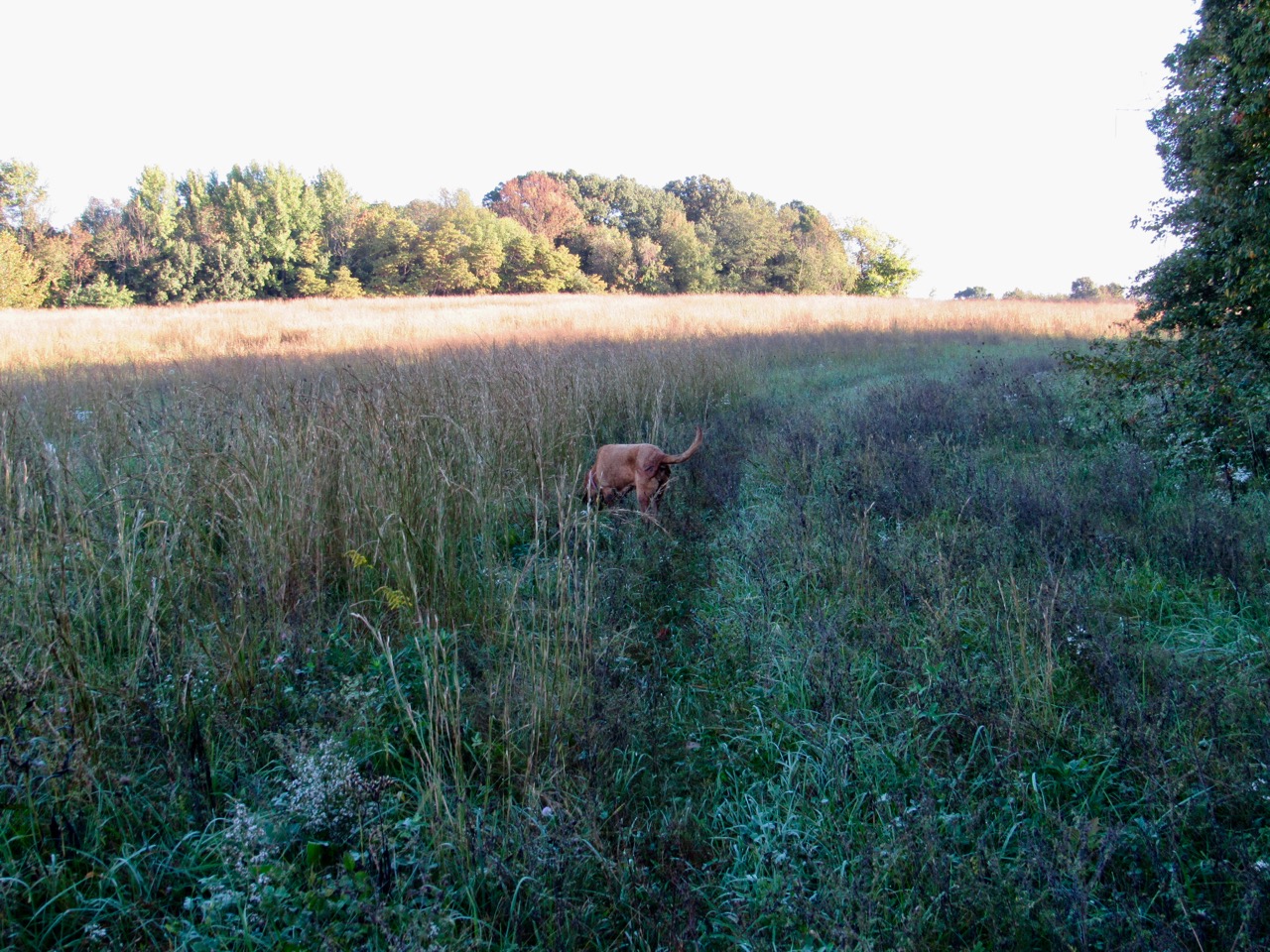 Sadie would try to sleep when Heidi or Stella would but she would always be awake first and ready to do something. Anytime I might be sick and get up in the middle of the night, Sadie would always follow me into the kitchen in the dark to check on me. If Heidi was outside alone she was always at the door when Heidi came back inside to tap noses and make sure that Heidi was okay. Of course she would always stare at me when she wanted to go on a walk, now I have to wake up Stella from sleeping to go on a walk. 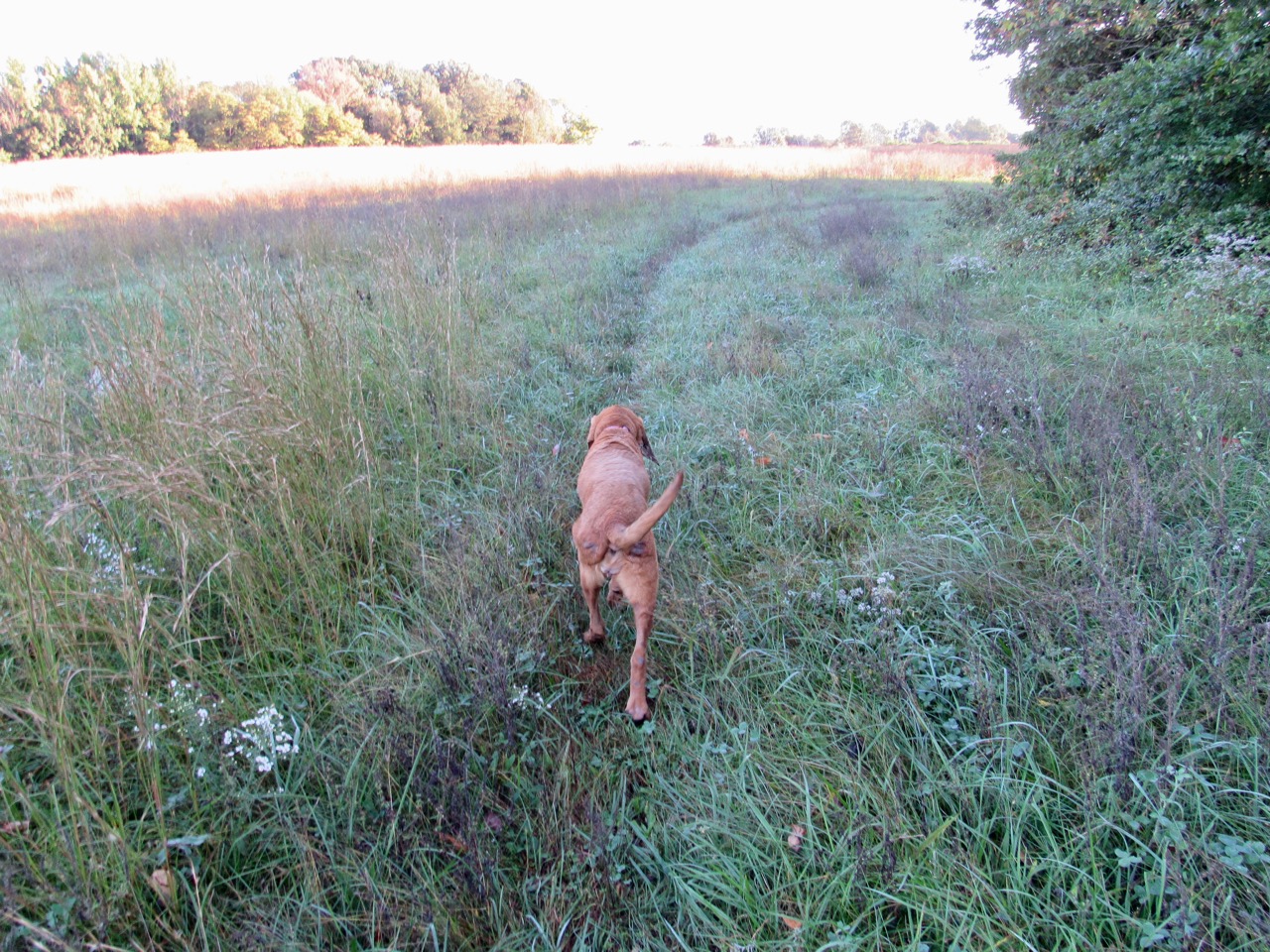 Another change I forgot is the water bowl for Heidi and Stella. They use to have their own water bowl in the bathroom away from the bowl in the computer room that was claimed by Sadie as her own. She would never growl, would never fight but she would guard that water bowl sometimes and if Heidi or Stella got close to 'her' water bowl she would do nothing more than hang her head beside theirs not saying a word nor growling ... just hanging her head close to them ... they would never drink and walked away. 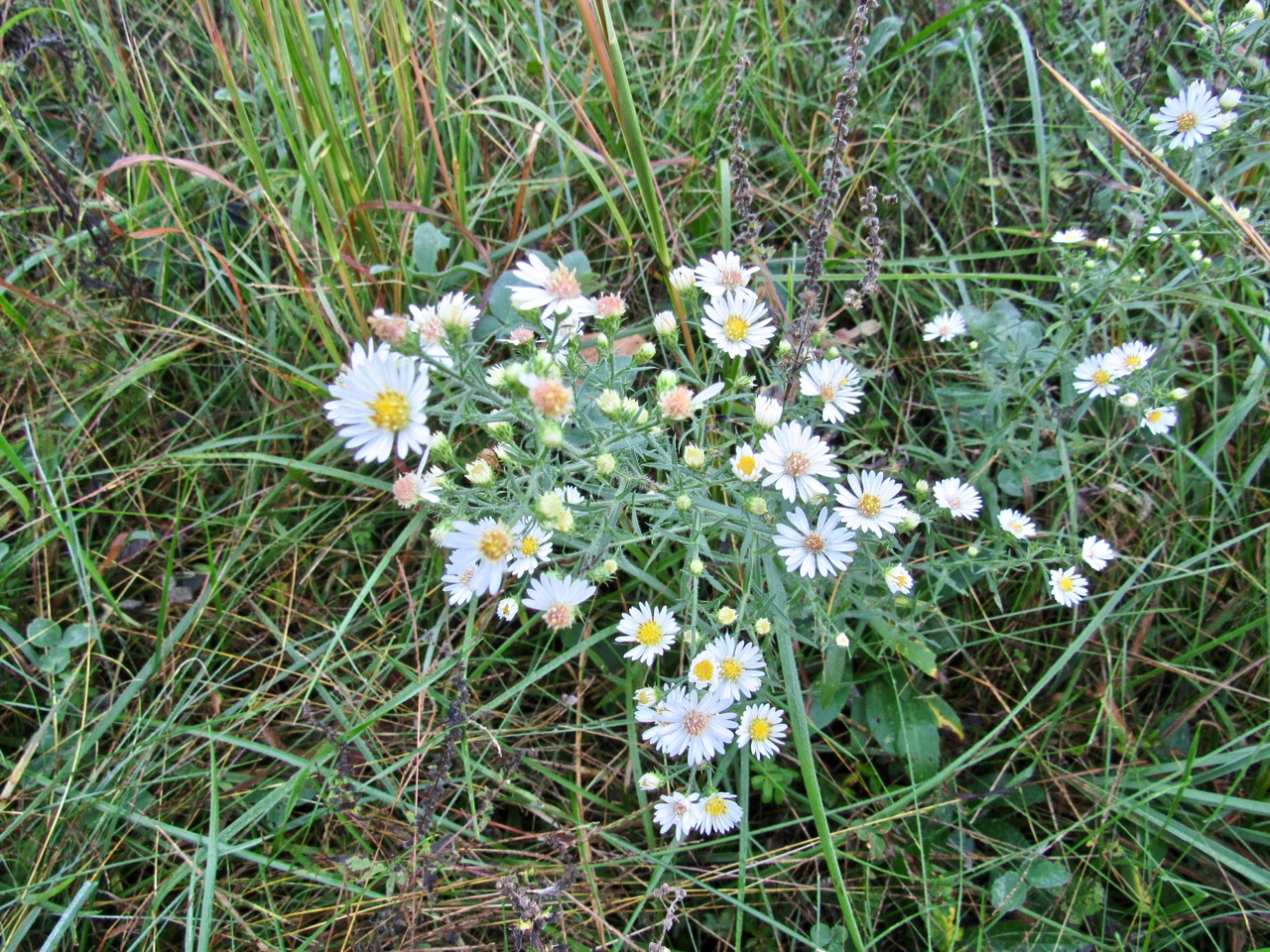 Now Heidi and Stella drink out of the same bowl that used to be Sadie's in the computer room. Neither hound cares if the other drinks out of that bowl. 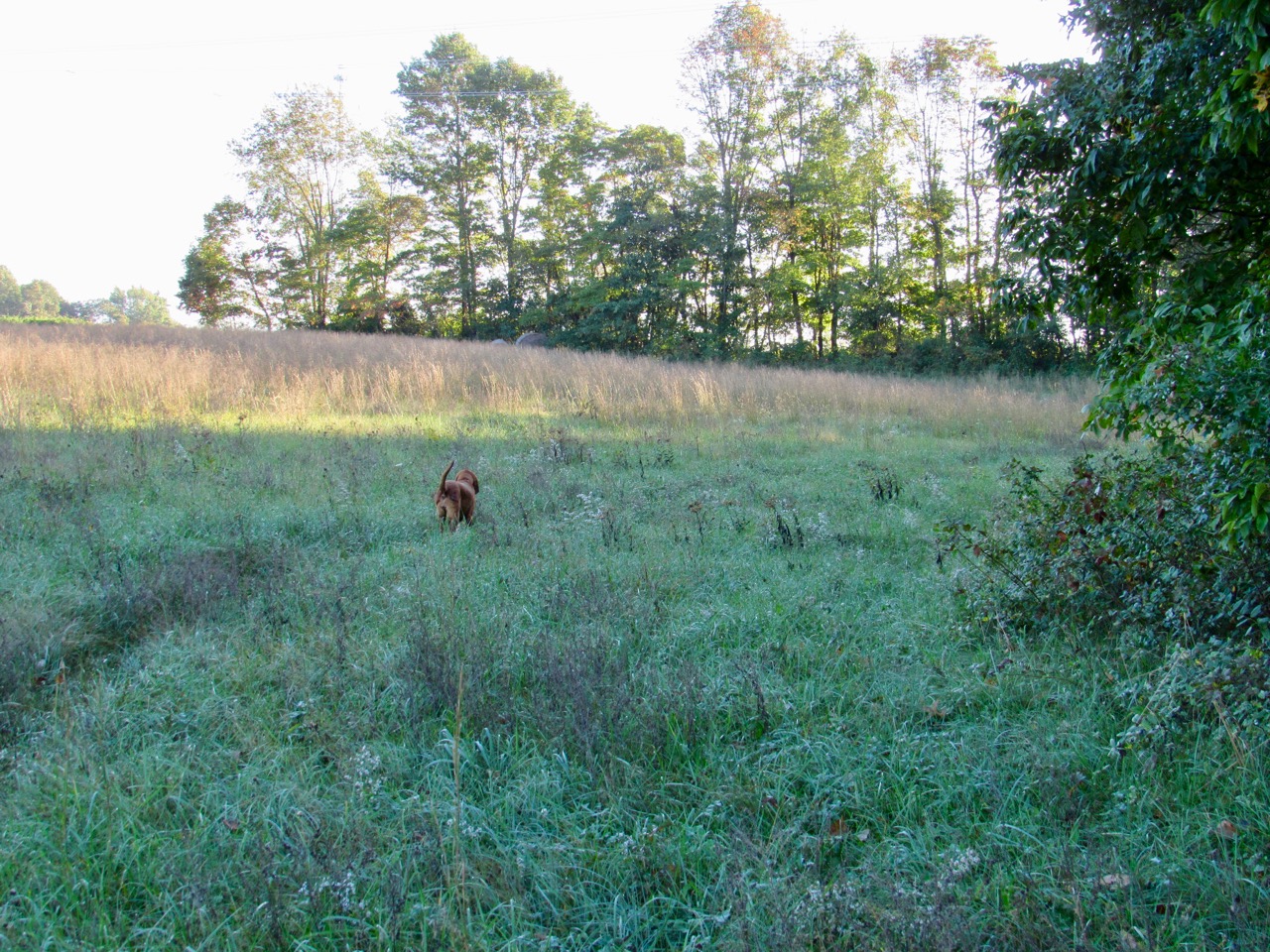 I still wonder what happened to Sadie that Saturday morning. The early predawn hours right as I wake up are the hardest for me or seeing that big leather chair with the ottoman empty every night while I watch a game or movie on tv. I will always wish Sadie was here dragging me outside in all kinds of weather to get her walk. 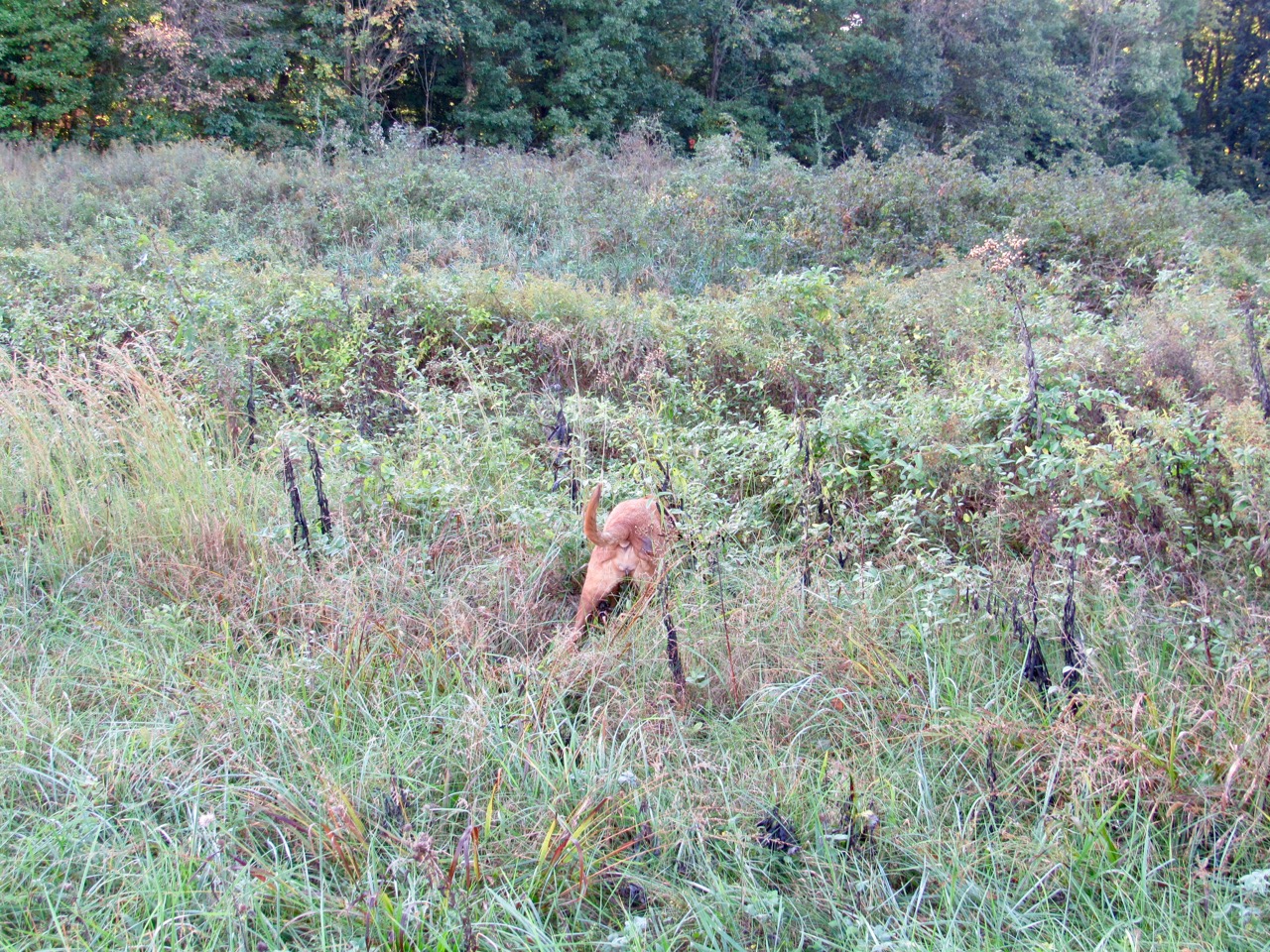 The hounds have adjusted well, I've done pretty well. It's not the first time I have lost a hound,  it won't be the last and as usual it gets easier as time passes. I remember every basset hound or bloodhound I have had since 1987 and their different personalities. I have lived with a lot of good hounds in the last 31 years, a lot of funny memories and thousands of photos I can look back through to remember them. 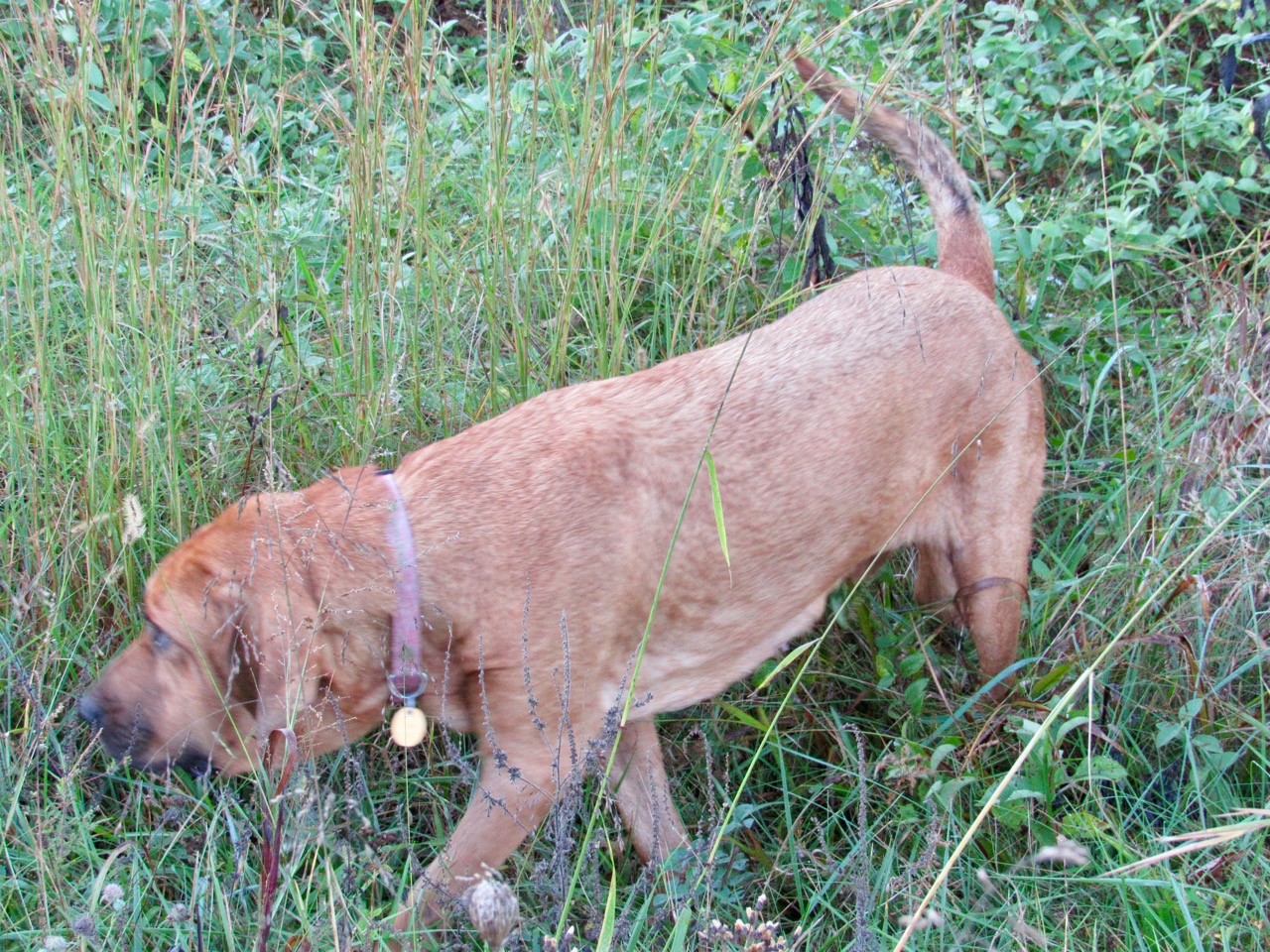 Stella goes back to the vet tomorrow at 11am to get the three staples taken out of her leg where they took off a growth. Evidently it wasn't that small if they had to stitch her leg up. The spot on her head has complete healed up and her right eye looks really good. I have been putting in eye ointment the vet gave me, 2x per day. She knows when I turn on the hallway light at those two times during the day that I am going to put ointment from my finger to her eye. She doesn't resist, she just sits there and then wags her tail as I rub her eye so the ointment spreads. 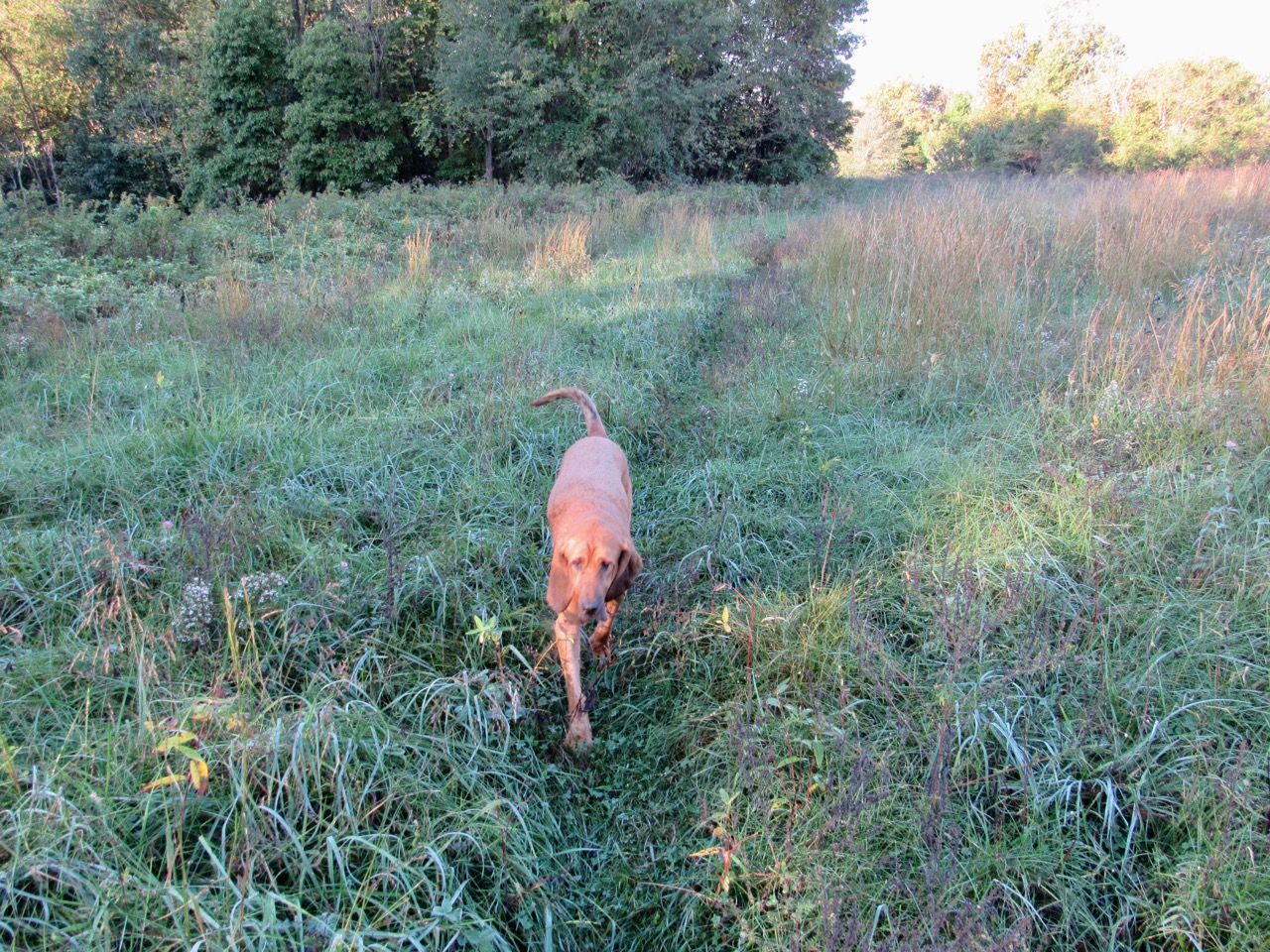 You may have noticed a difference in my photos the past couple of days, maybe not. Yesterday's post and this post have photos taken with the Canon PowerShot SX530. I can see some small changes but I don't see the crystal clear images that I'd like. I do see a difference in the color in the early morning light when we do our walks. The color looks close to the real tone of green. I do edit some of them just like the photos I took with the Nikon D3200.

I can take macro photos like this where my Nikon D3200 does not have a macro lens but the zoom lens is as low as 18mm. I tested some different settings on the Canon last night to see if I could tell a difference. The Canon SX530 has some nice features, some of them I really like, others I will never use. 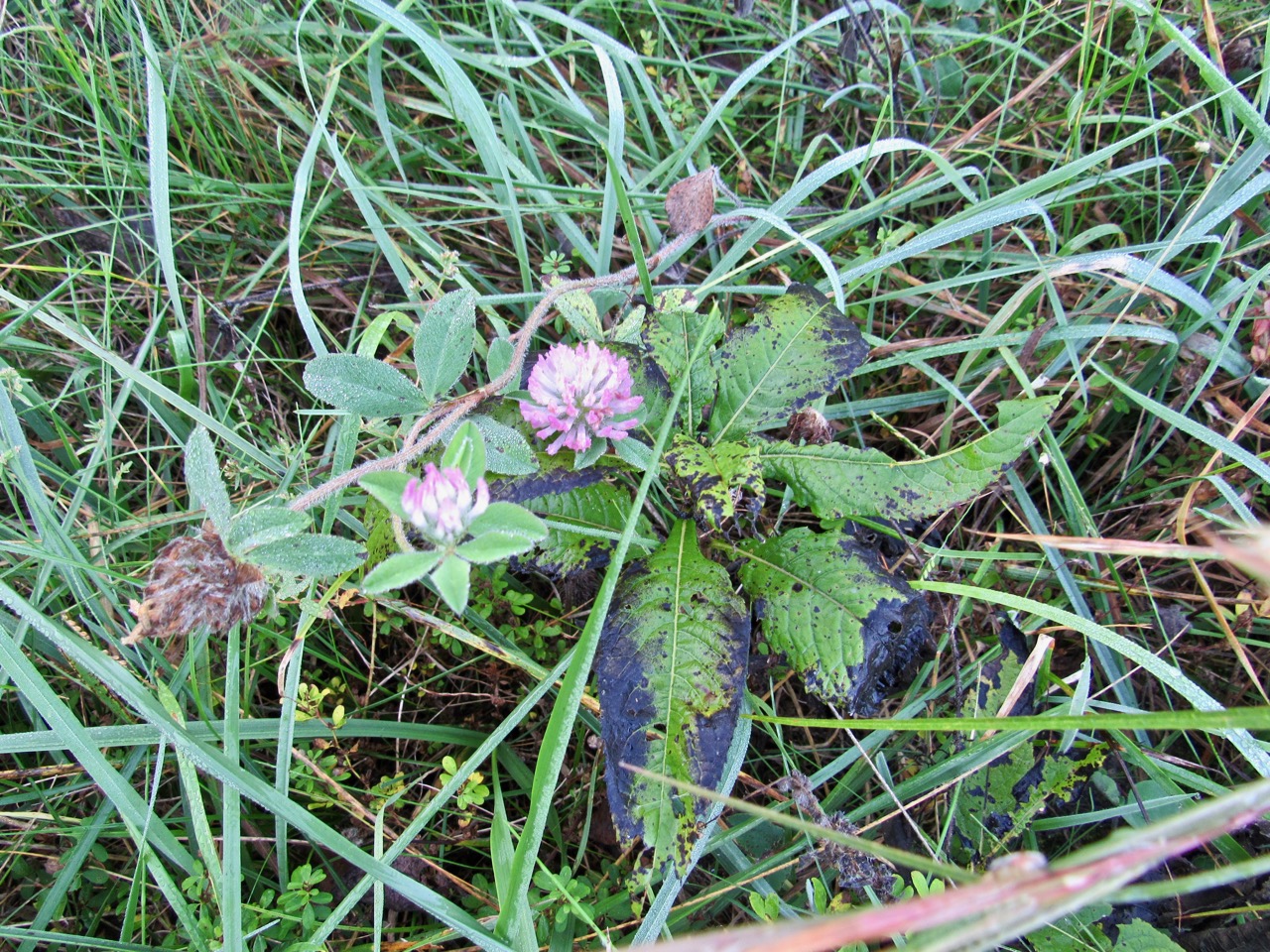 Not until I used the Nikon D3200 camera this afternoon did I realized the difference in weight was that noticeable. I knew by reading the specs the Canon SX530 was the lighter camera but after using it on the walks for the past two days and then picking up the Nikon D3200 today I could feel a major difference. 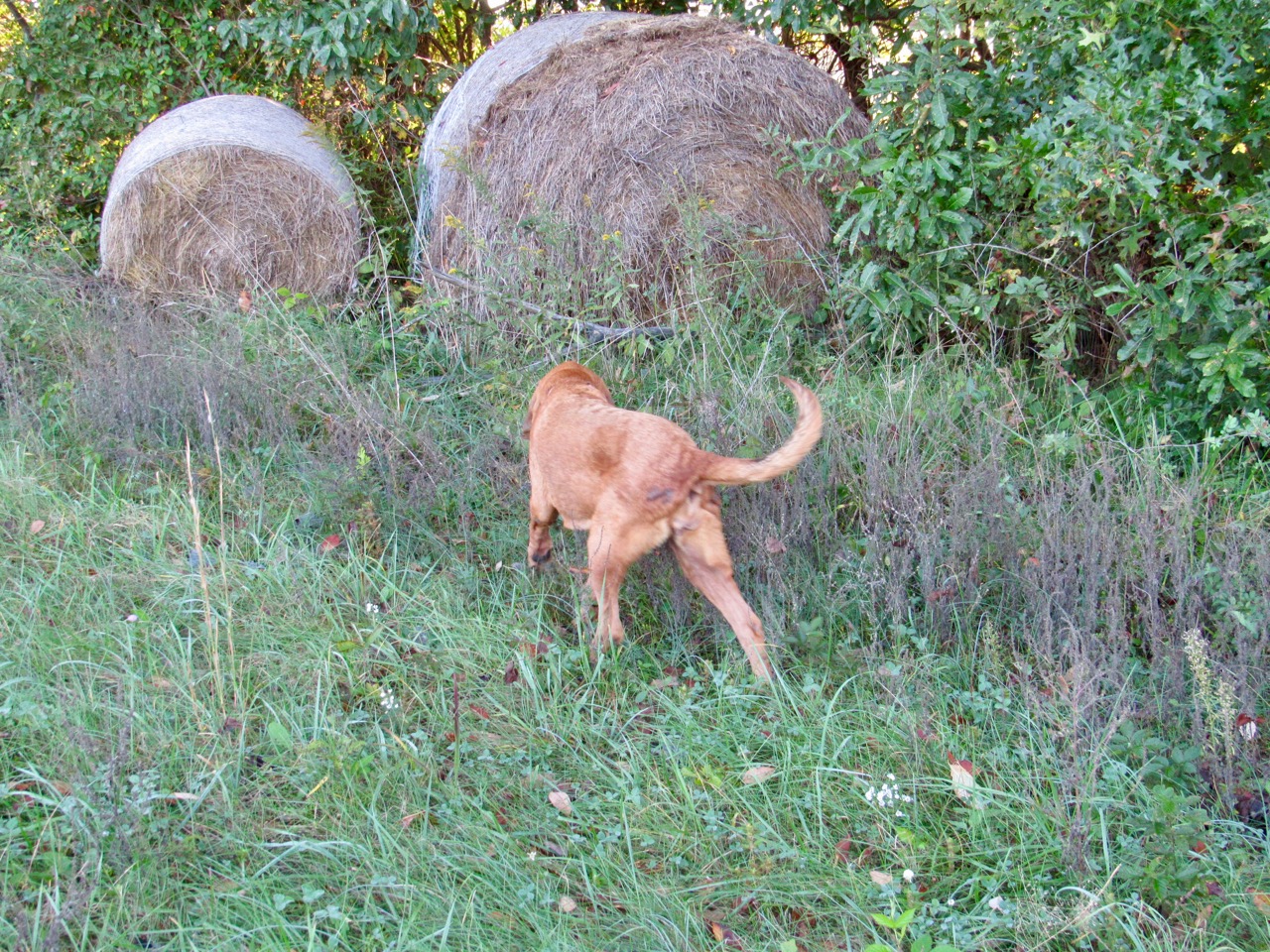 I've compared photos from both cameras on Flickr where any photo you upload is not compressed to a smaller size. I looked at them on this blog and my Wordpress blog. They look best on my iPhone 8+ and don't look bad on this blog. Yet in some photos you do get that crystal clear sharpness with the Nikon D3200.

With the photo quality being so close between the two cameras, I ask myself is there really a need for a different camera? I use the iPhone camera for indoors and it produces great photos in low light situations. The Canon is light, has the macro capability and can zoom just as far as my 200mm Tamron lens. It might be easier to shoot rapid fire photos with the Nikon since the Canon has a slight delay in getting focused when I am trying to catch Stella running. 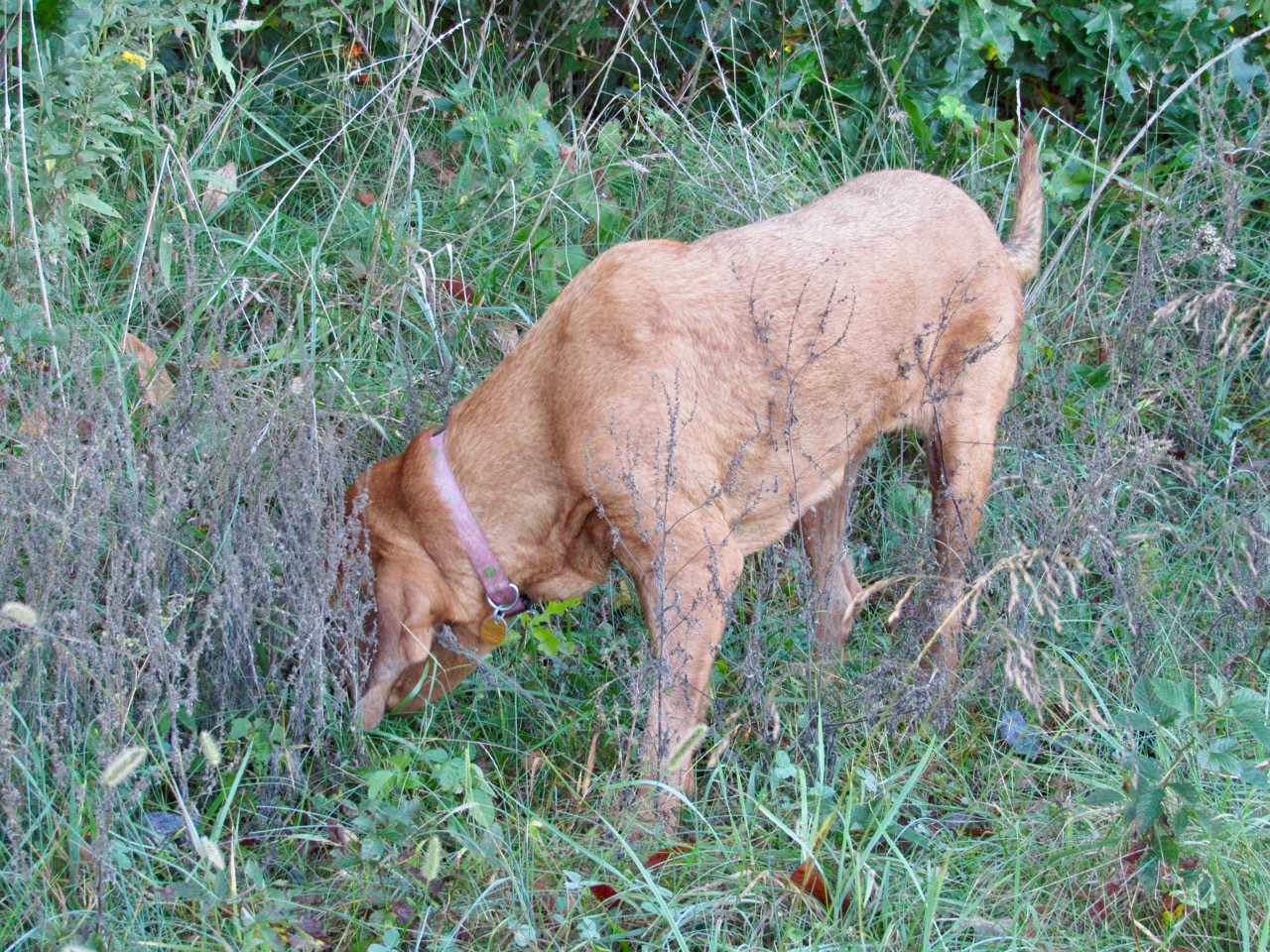 I can use the 14 day no questions asked return policy for a full refund if I decide I don't need a different camera. About the time I think I'll return it, I see a photo I have taken with the Canon that I really like, that might even be better than the one taken with the Nikon .... and vise versa. 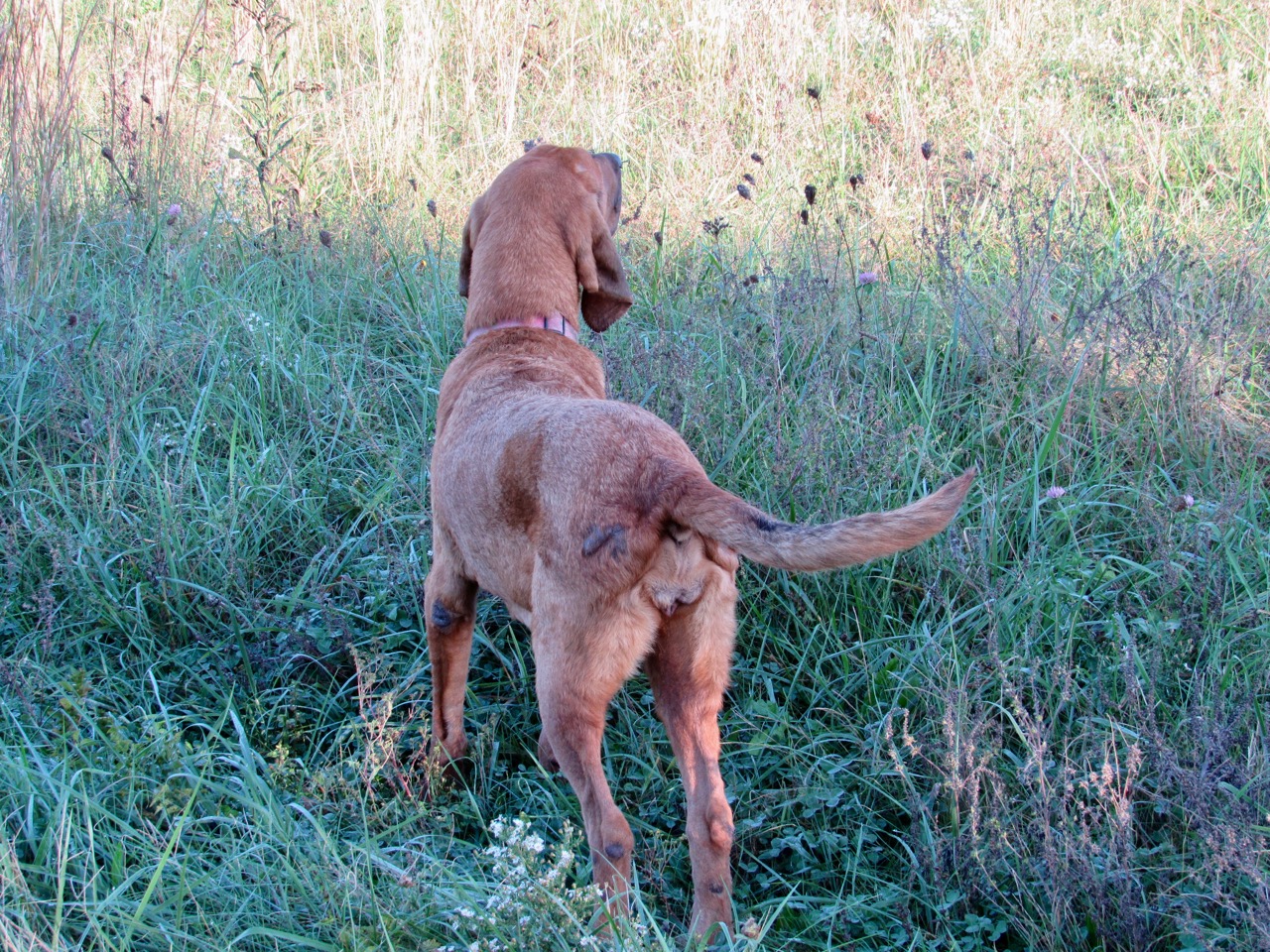 It was cool enough to mow the yard in the middle of the day today. Tomorrow the high is suppose to be 79° then will drop into the 50's by Thursday. I will be applying polyurethane on the windows and front door Wednesday so I can have the windows open for ventilation.

Dishes are done, laundry is finished and the house has been vacuumed, plus the lawn mowed ... I think I'll call it a day. 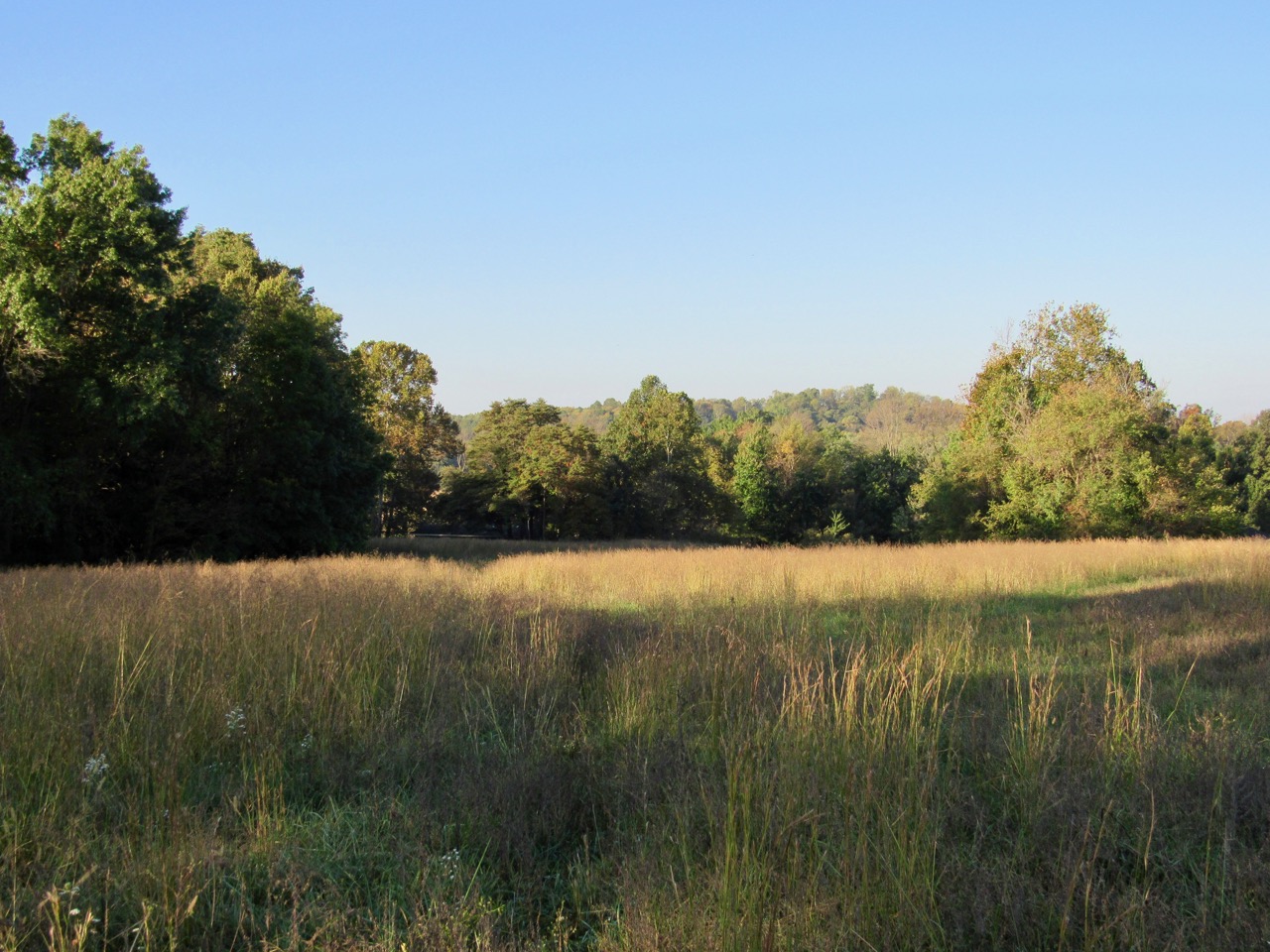 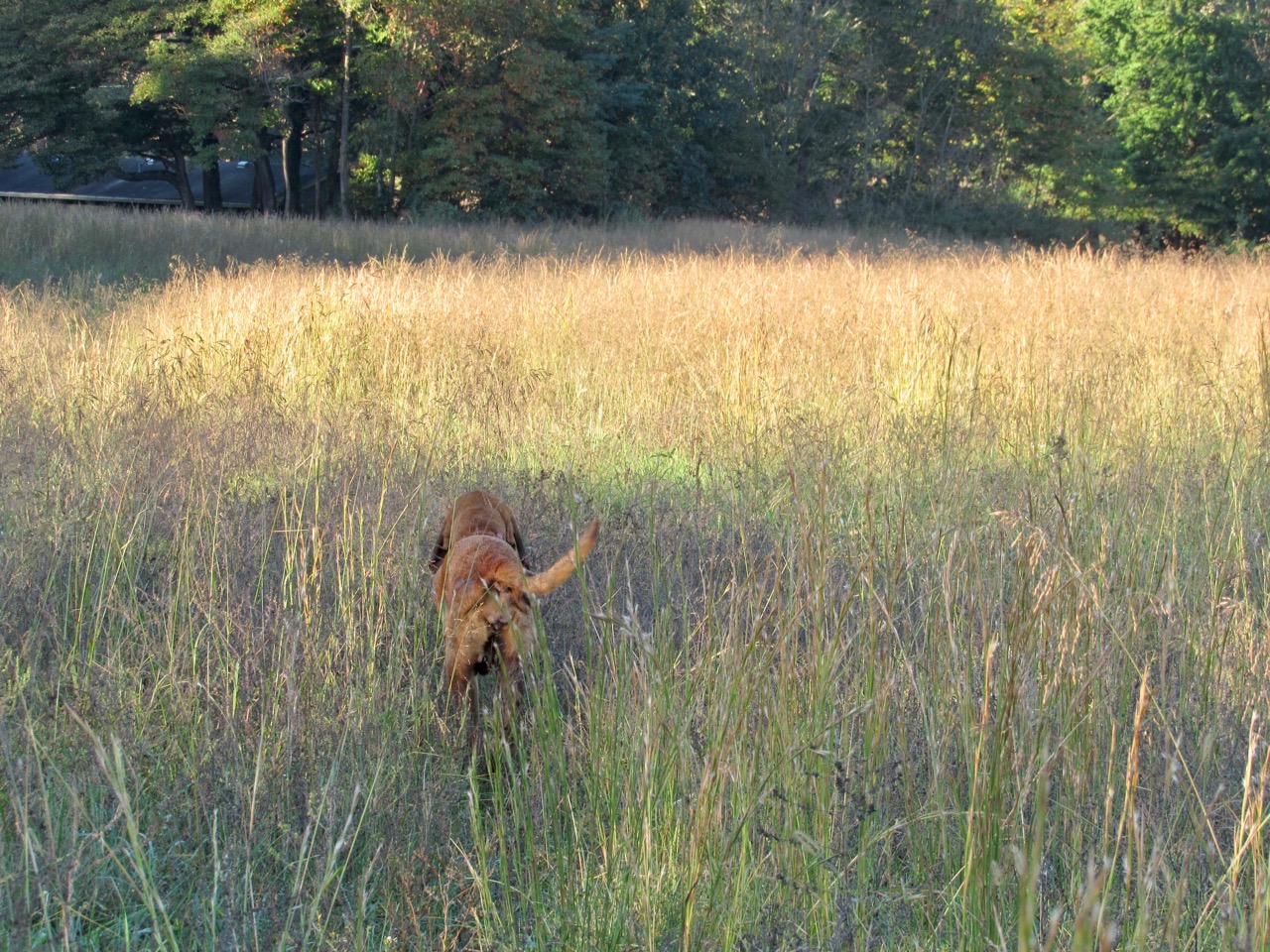 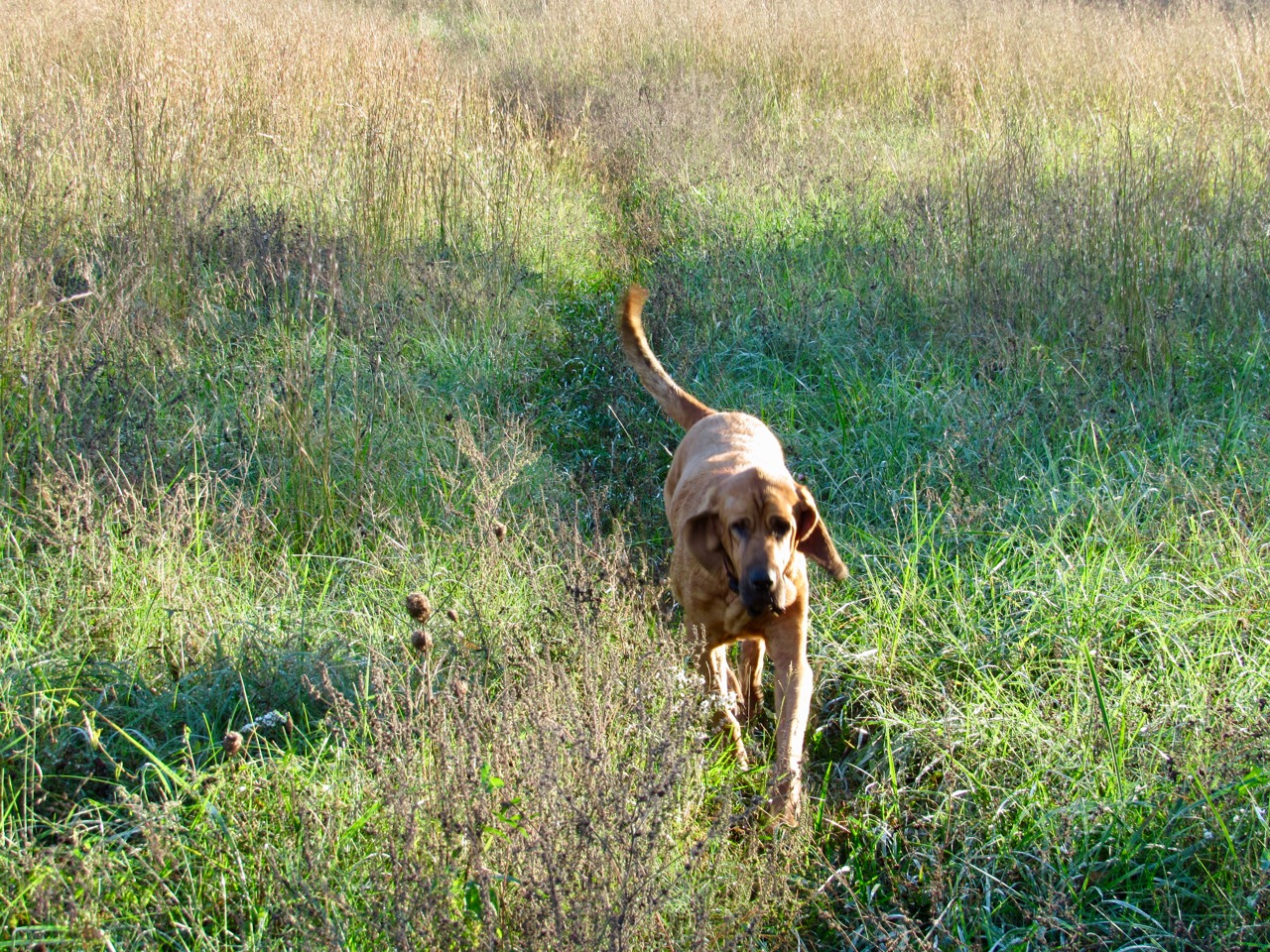 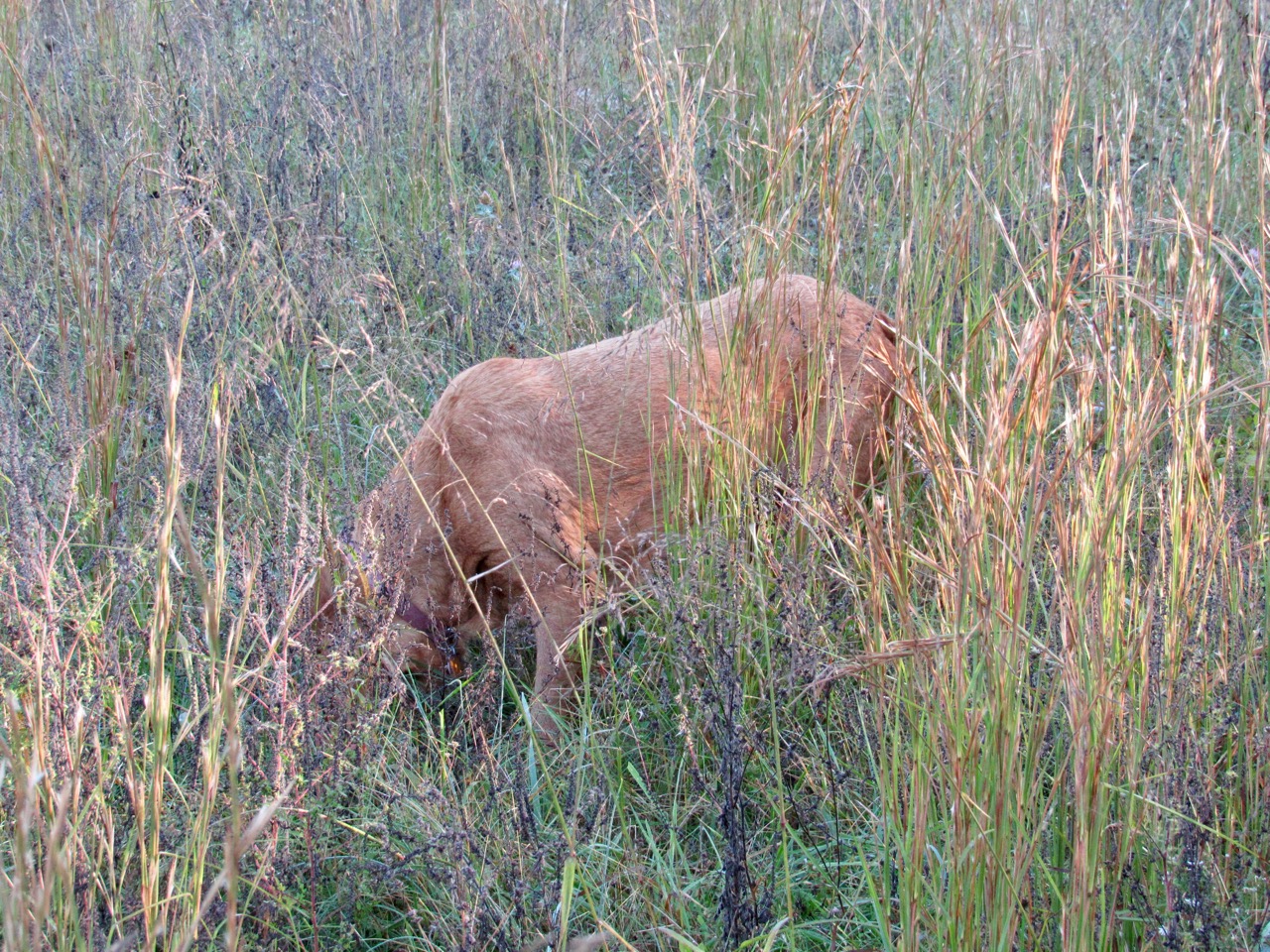 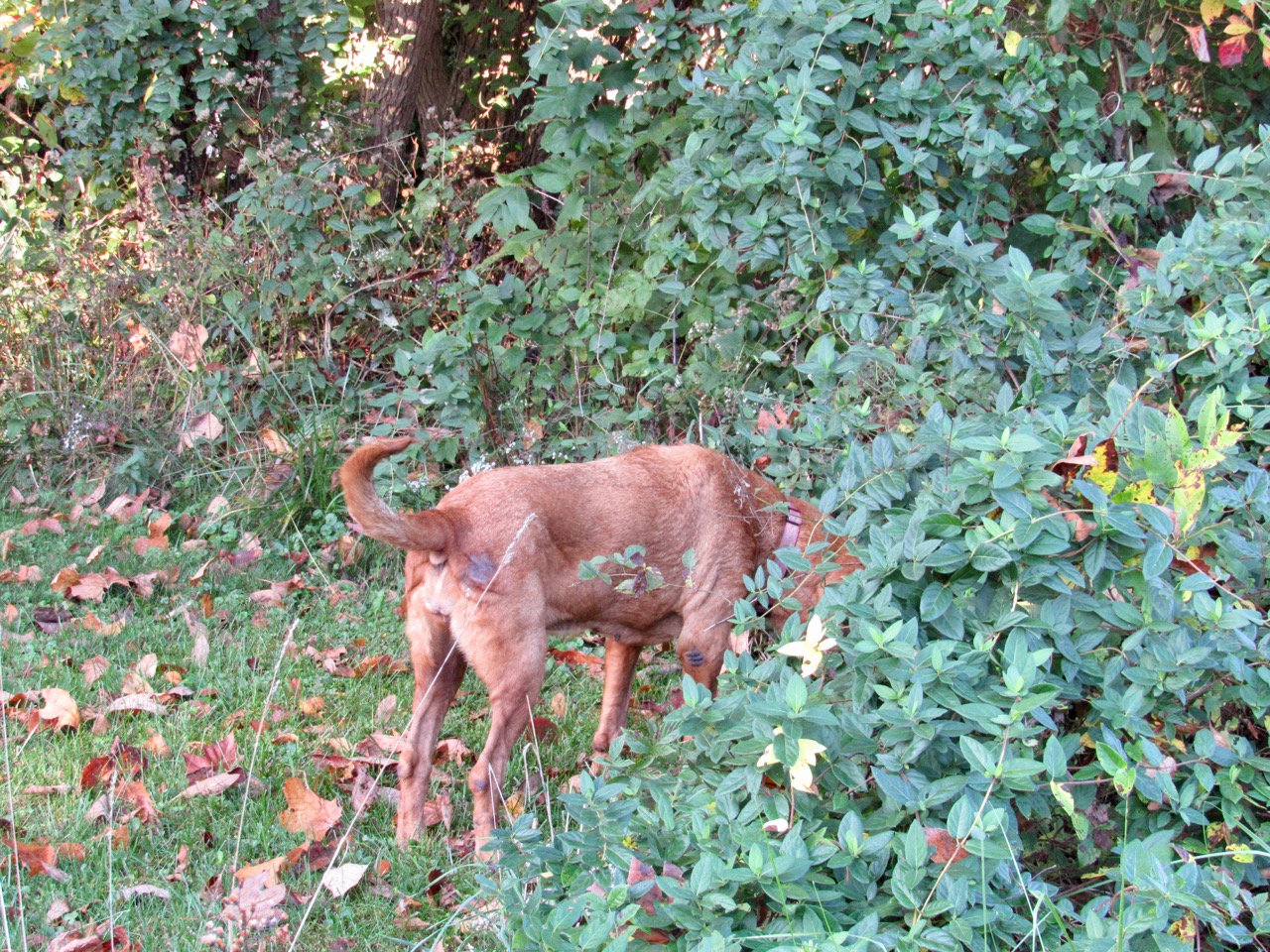 The other tree sampling I cut down about four years ago. Different fungus with an interesting design. 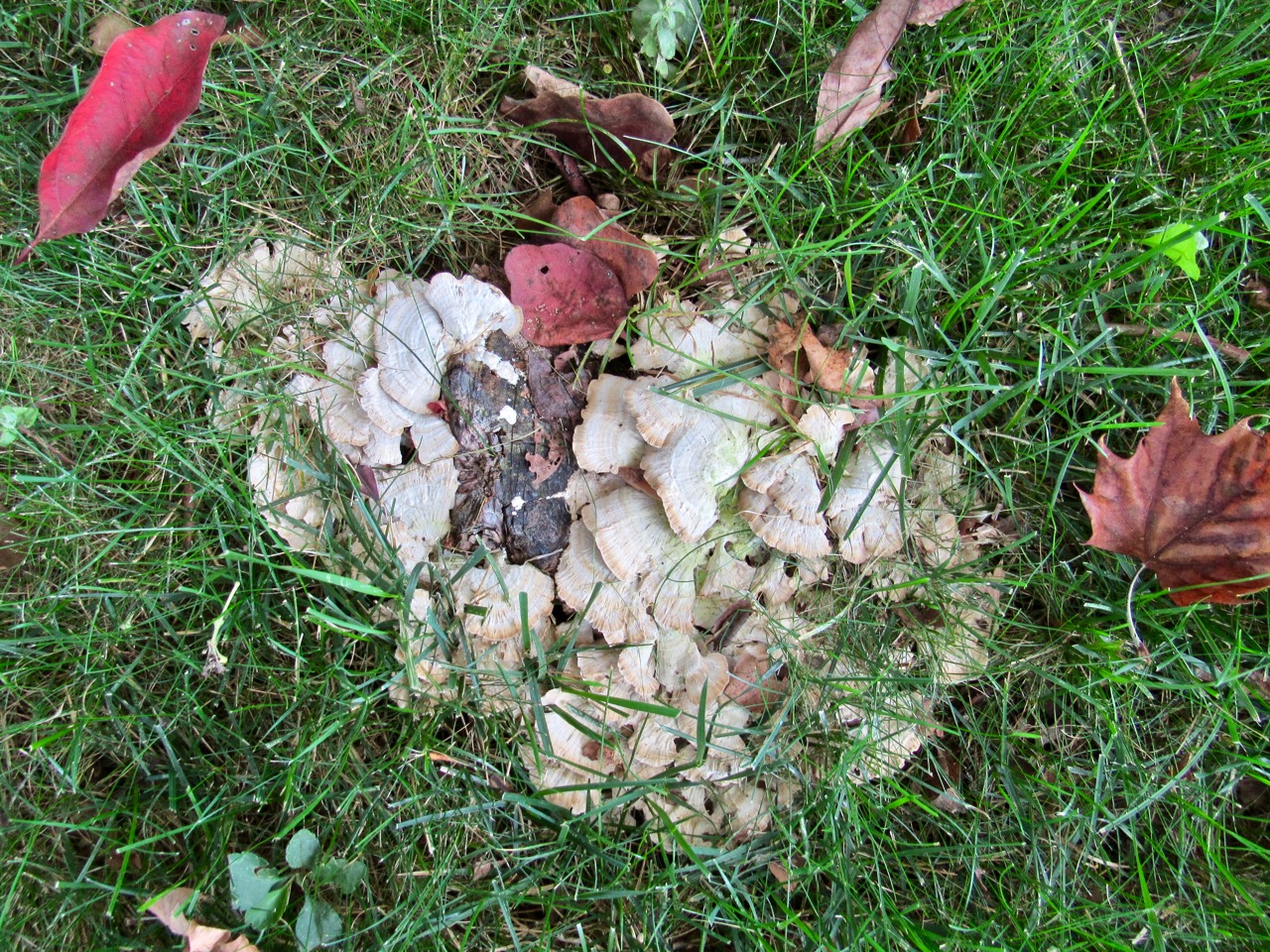 I took this photo Monday night with the iPhone 8+. 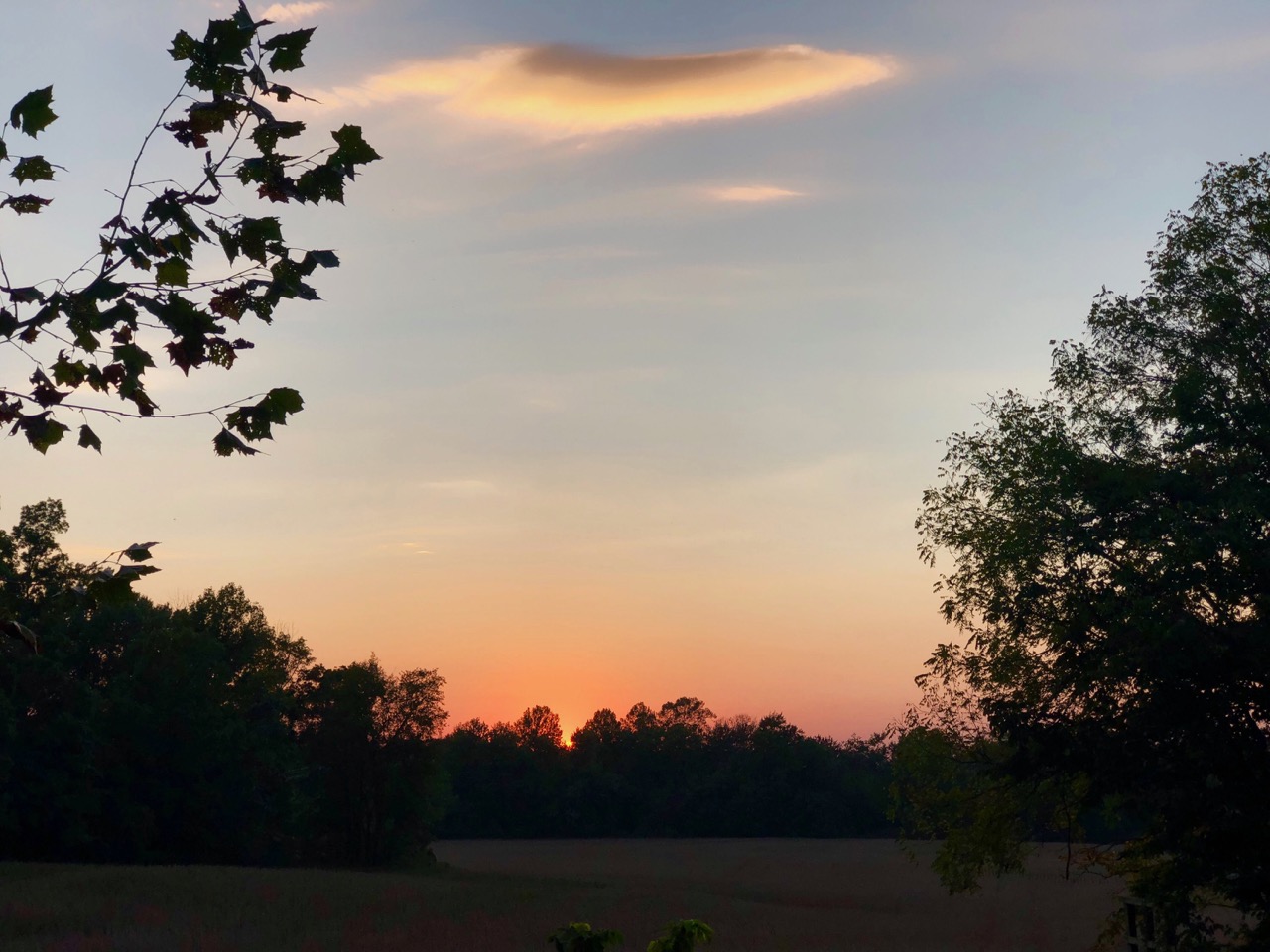 Within minutes I took the same photo with the Canon SX530. 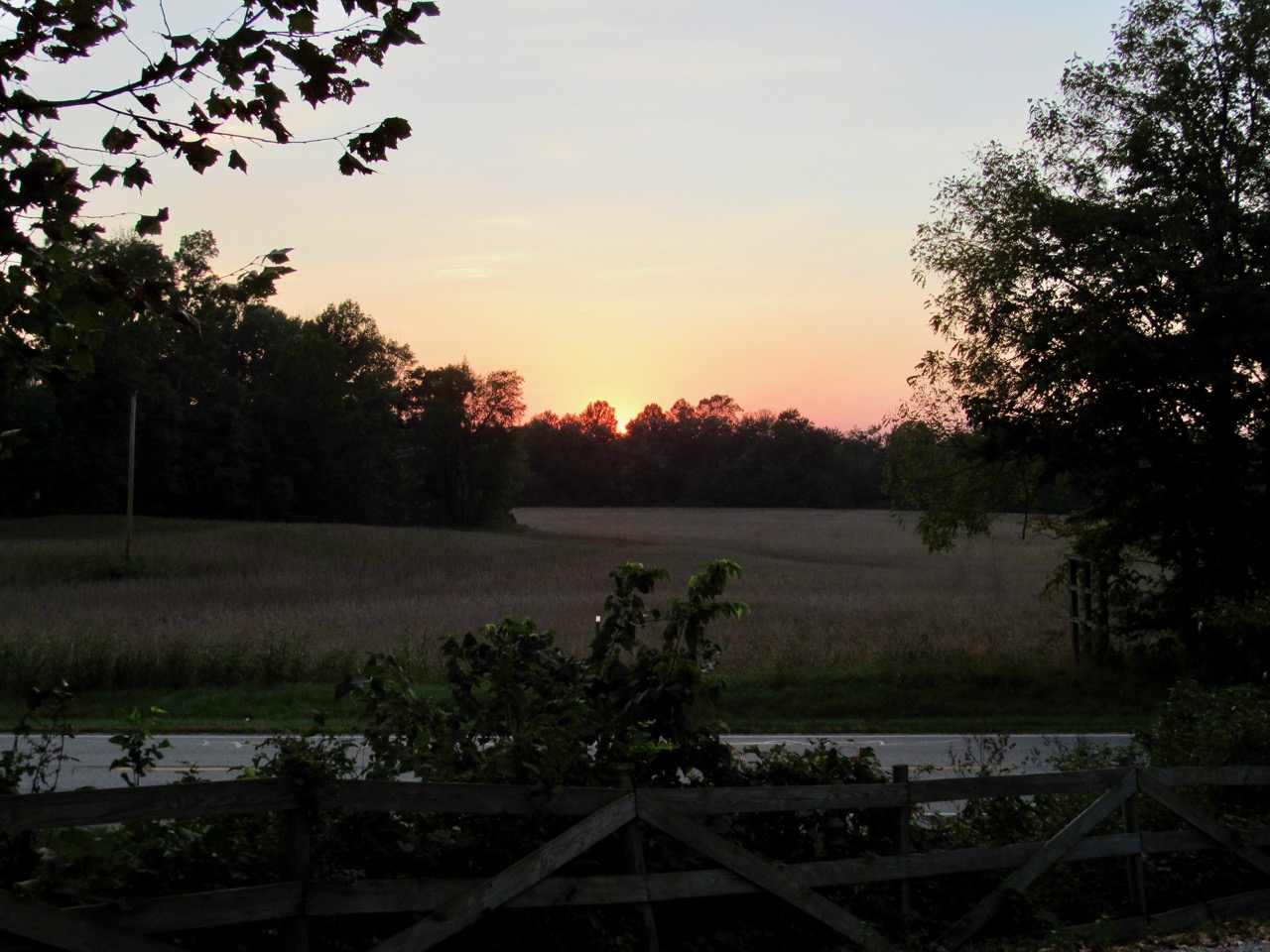 While I was putting the mower back in the shed, Stella and Heidi came outside only to see it was better to be inside with the air conditioning and an afternoon siesta. They didn't hesitate  going back inside when I did. As you can tell, they were thrilled being outside.  LOL 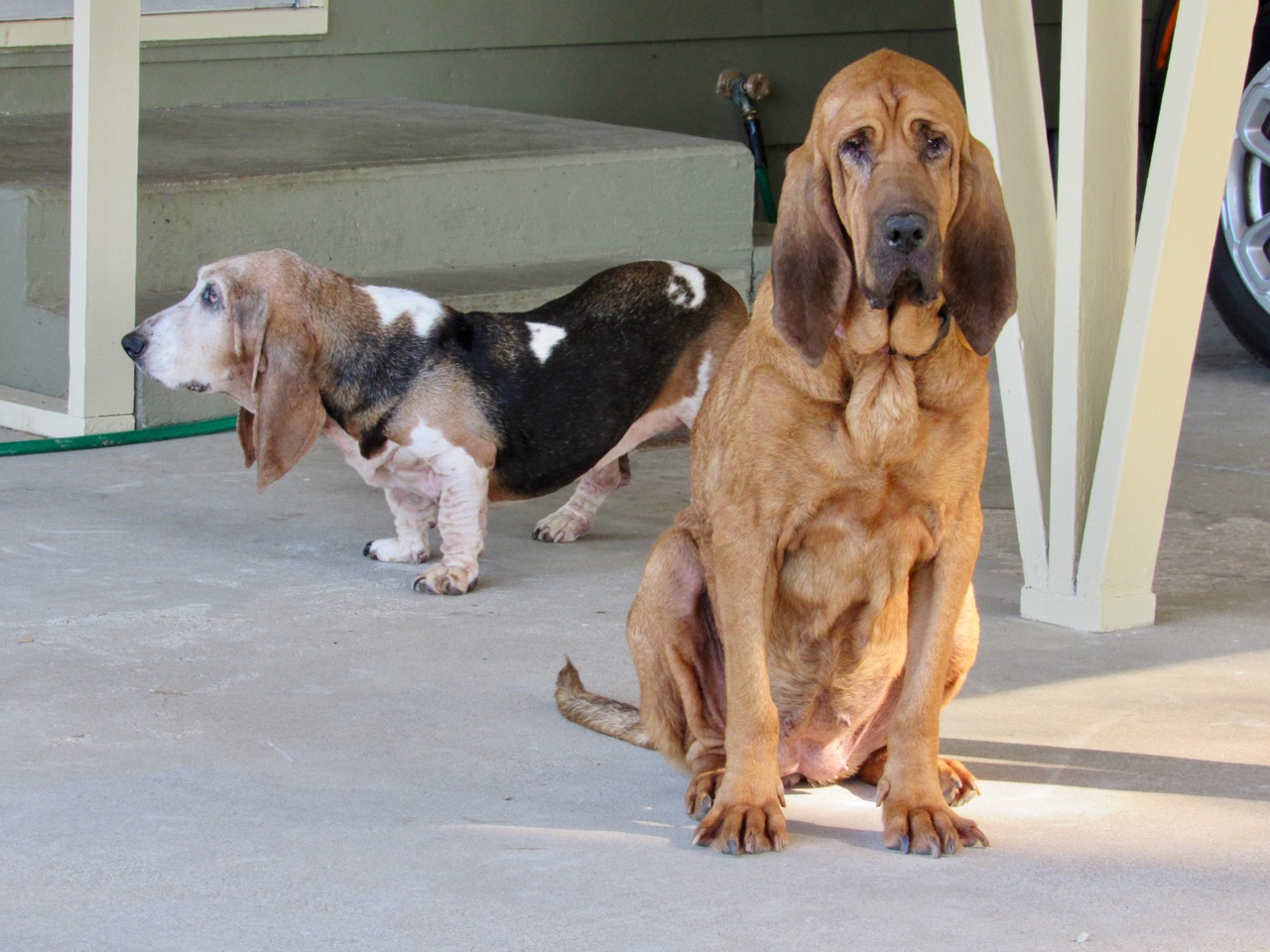 Can you tell which camera I used for the photo below? 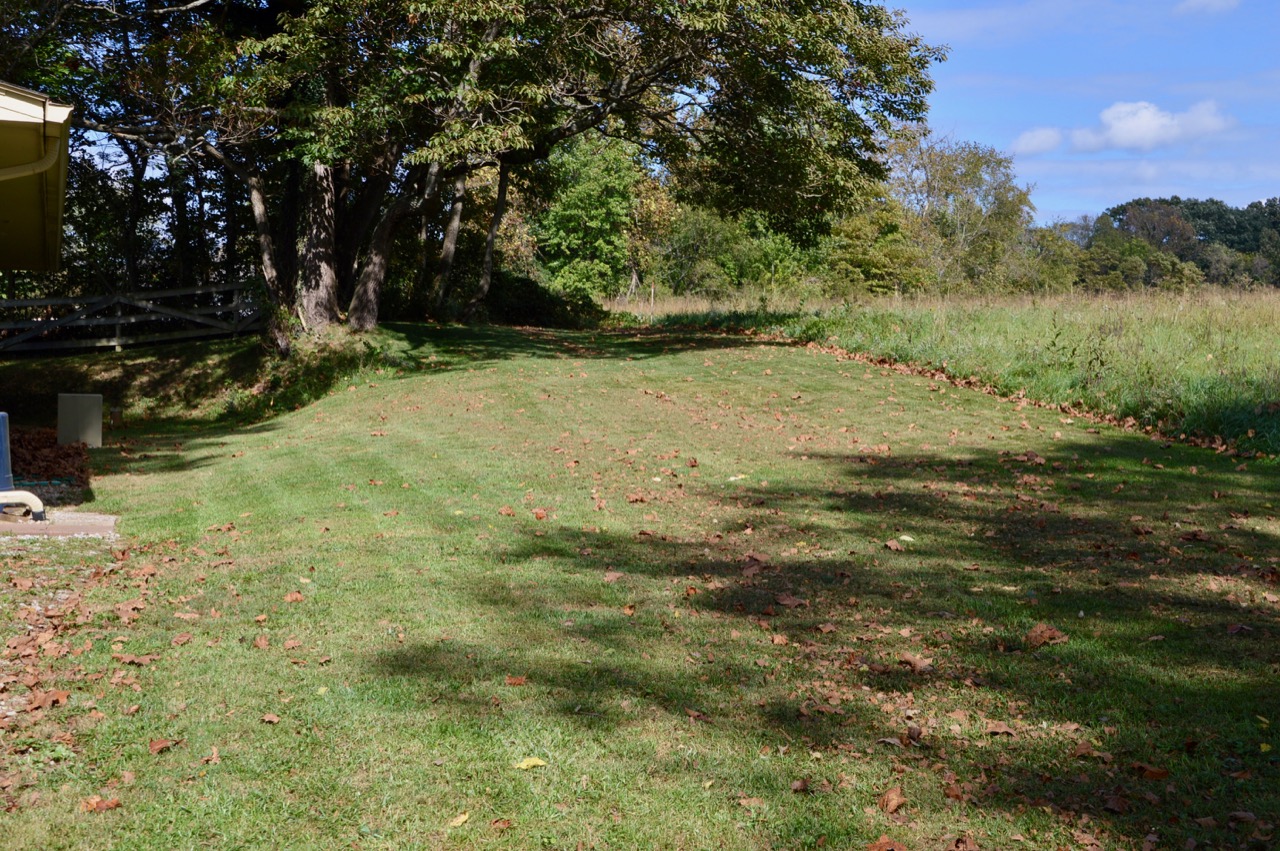 A great day here in 'the tropics' of Southern Indiana today.
By Steve at 2:30 PM