Stella On Her Own This Morning 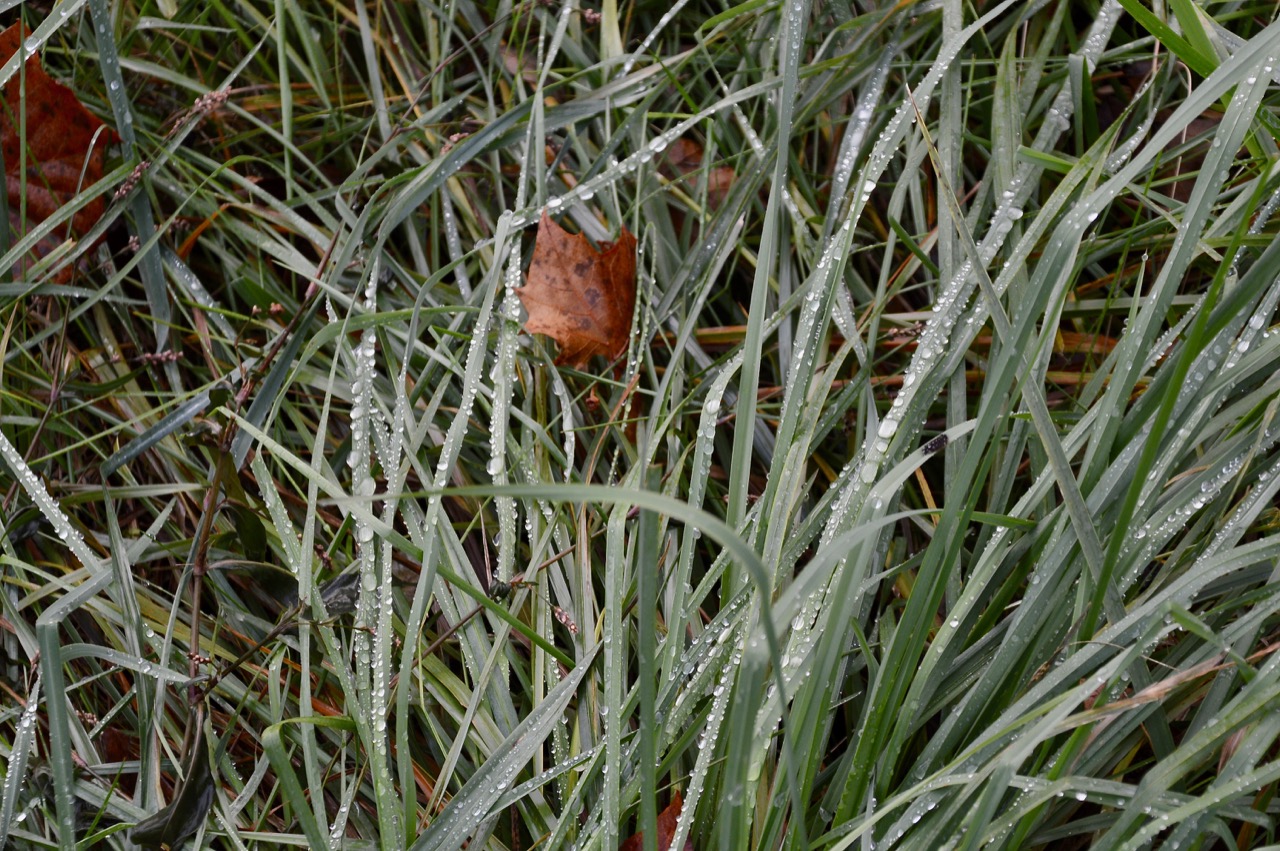 It was time and I needed some kind of change on this daily morning walk with Stella. Plus I was curios what she would do. I decided before I went outside that this morning I would let Stella do what she wanted, go where she wanted AFTER she took one step into the field. That was my only requirement for this adventure. With no wind, the cool temps felt great and we proceeded through the wet field after a night of rain. 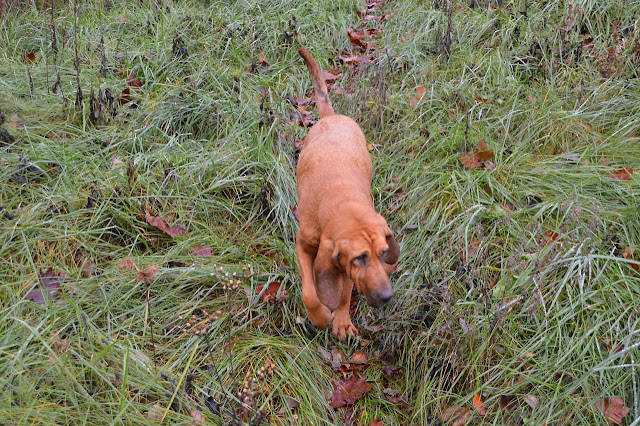 I was a little surprised she did not lag behind and eat the wet grass, one of her favorite meals but I would find out later that wet grass wasn't on her menu this morning. It's something I don't like her doing but what can you do?

The leaves are trying their hardest to change colors. A little late this year and not nearly as bright colors as past years. 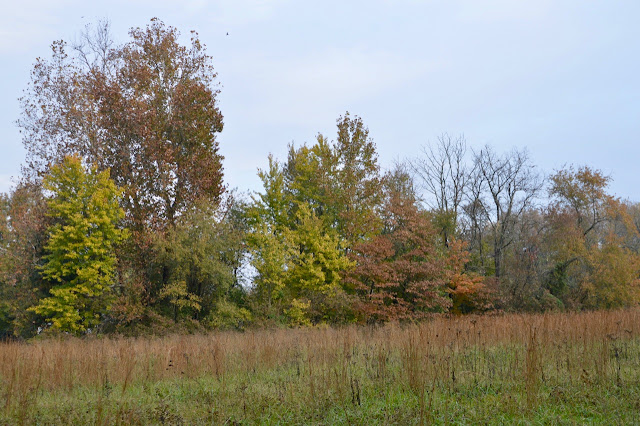 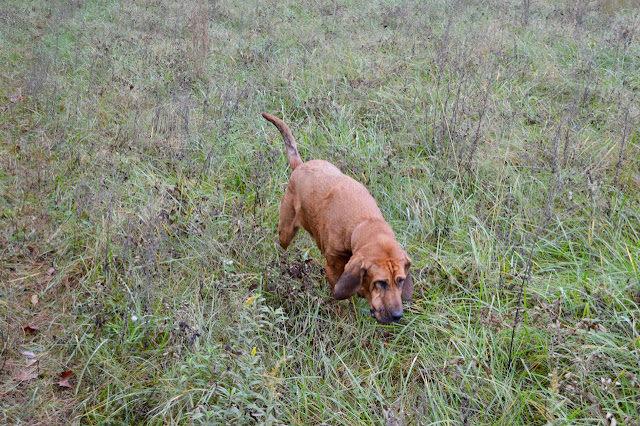 I think you can already tell what Stella's interest was today. Maybe this experiment wasn't going to be hard after all, if she didn't move much. 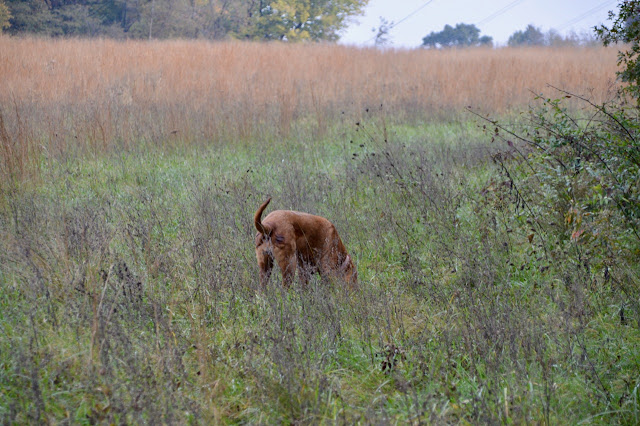 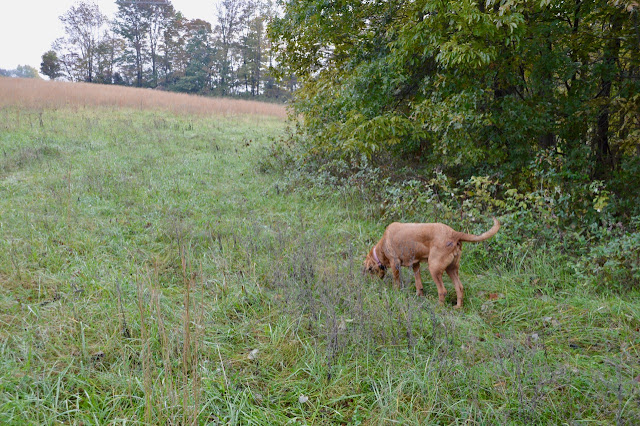 That little open space in the lower left of the photo is a deer path they take either into the gully or coming out to the field. 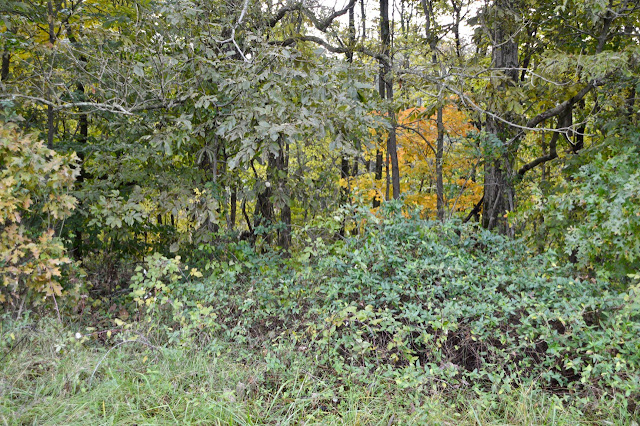 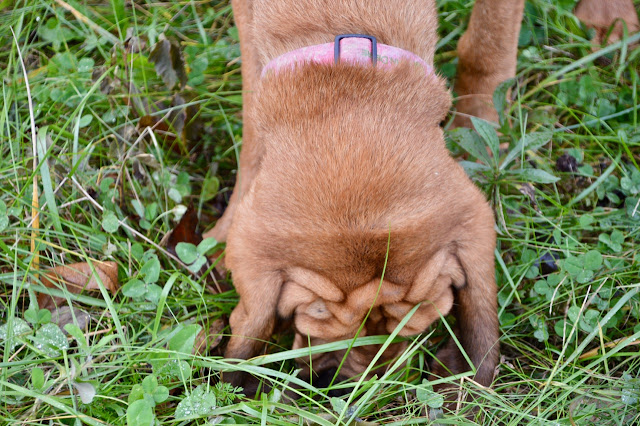 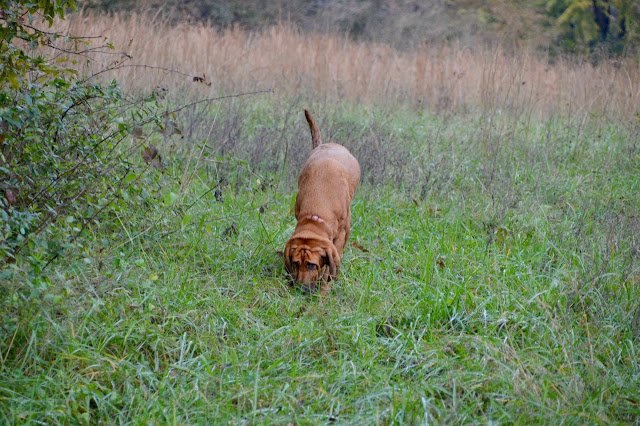 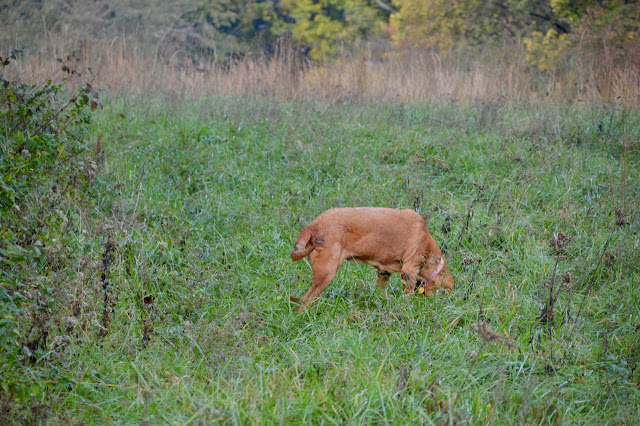 As I walked further away she was heading out to the middle of the field. As long as I could keep her to the left of me she could wander that part of the field all she wanted. 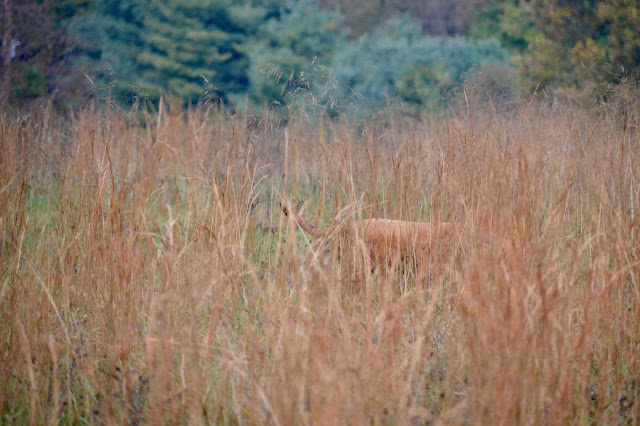 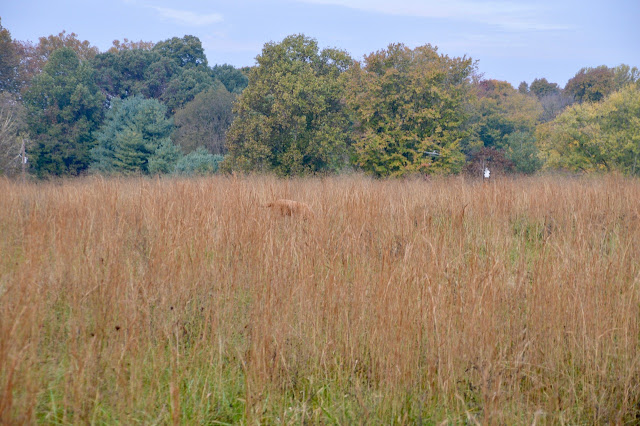 As I made the final turn home I didn't see any sign of her ... it's good if I don't see her to the right of this path. 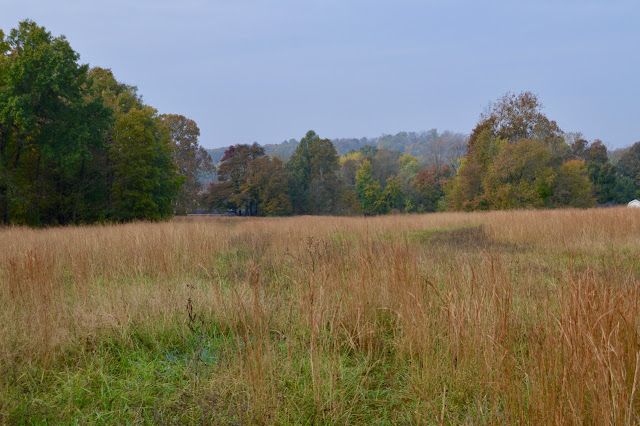 Look closely, you can barely see her. 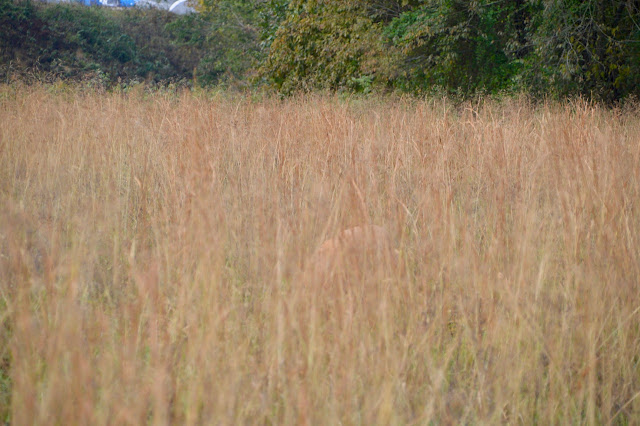 She saw me and immediately looked away like I wasn't even there. Ignoring all of my calls to 'come on' ... she went back doing what she was. At least I had put the collar back on her so I had something to tug if she was in a total stubborn I am not moving type of reaction. 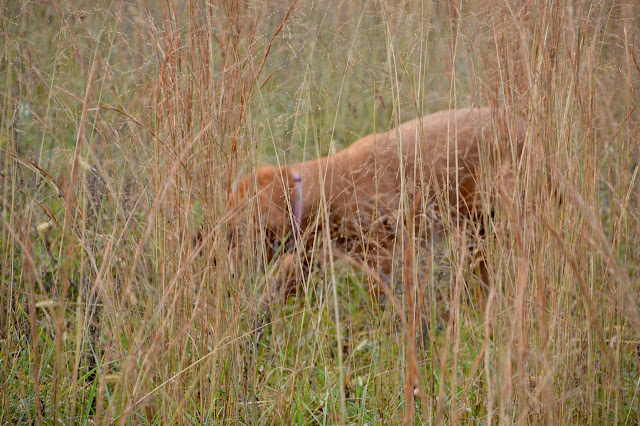 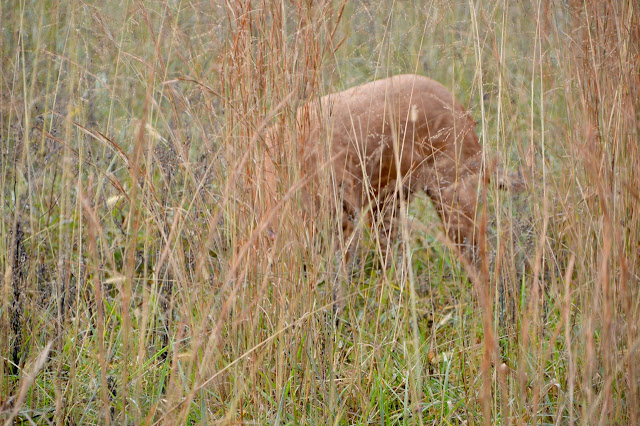 Just about the time I was reaching for her collar, she spun around, hopped in the air and took off running ... it's all a game to her.  LOL 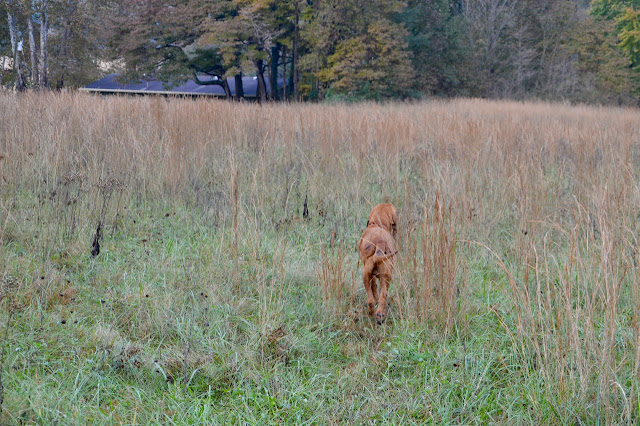 She changed her mind and decided the scent went left parallel to the old return path. You can see where deer have worn the grass down from their night/early morning traffic. 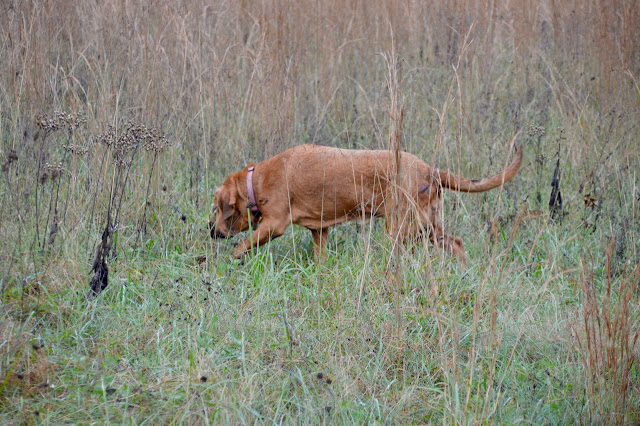 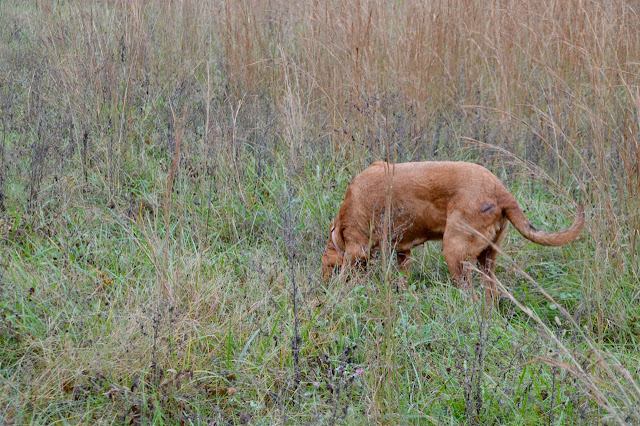 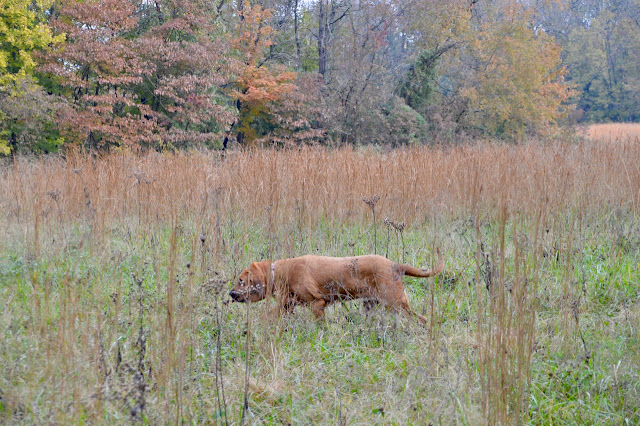 She wasn't happy when I ended her walk. She walked non stop to the door. 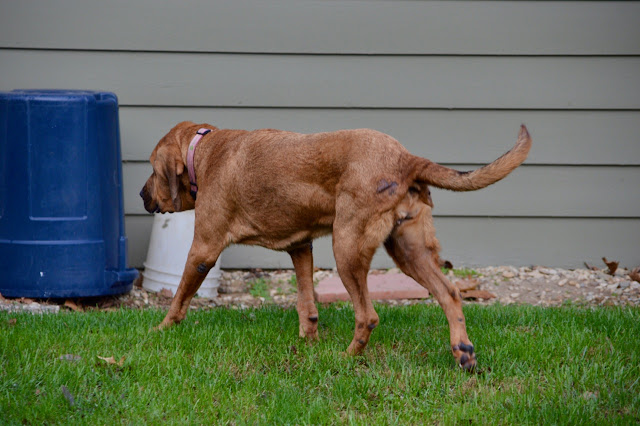 This squirrel use to drive Sadie insane as she sat inside looking at it from behind the storm/screen door. She is carrying one of those fruit balls that fall from the Sycamore tree. They really are called that but I've never had the guts to break one open and taste it. I'll see her 3-4 times per day walking back and forth along the top of the fence. 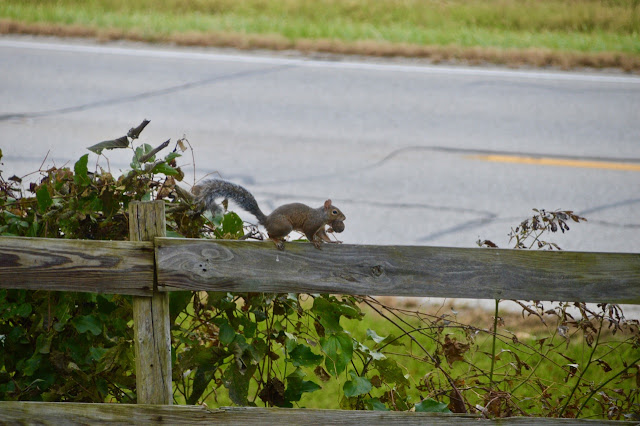 Heidi was positive the rarely seen 'field cat' had been walking in her area last night while we slept. Her nose led her around the house, one inch at a time. 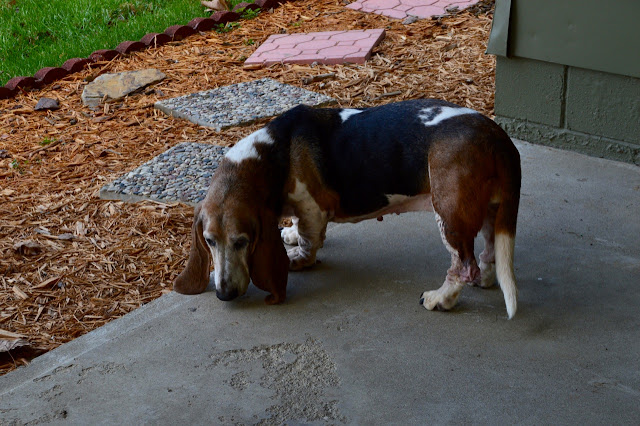 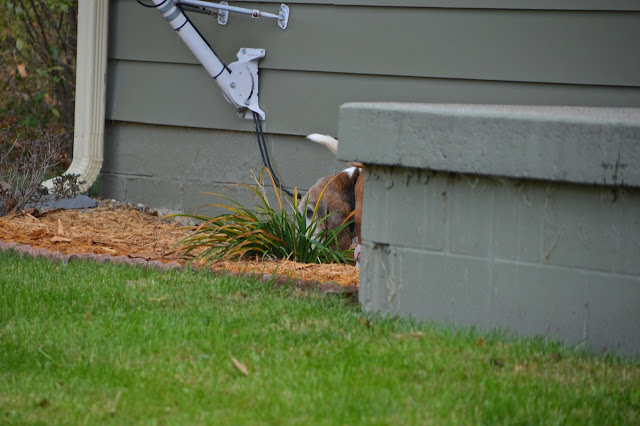 Stella wasn't going anywhere after her lunch. She know that college football would be starting soon, that would last all night. She was already thinking of her daily afternoon siesta she takes. 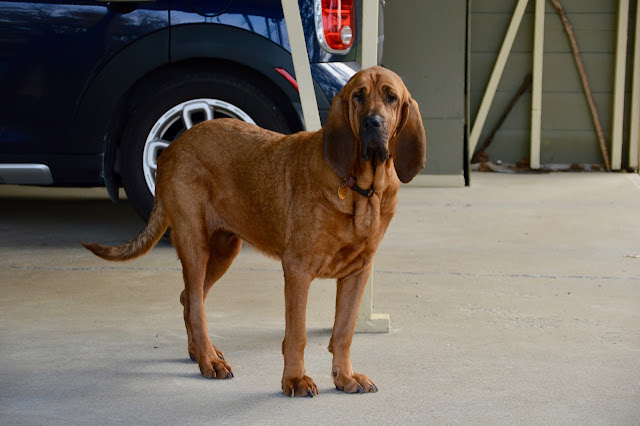 I was serious when I said that Heidi's nose led her around the house ... it never came up for air. 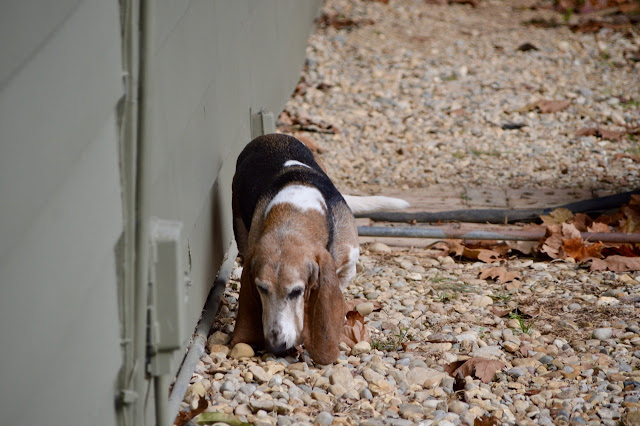 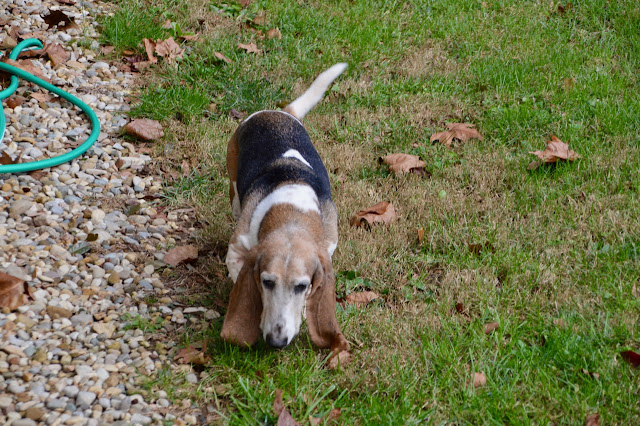 I found out it wasn't real hard to delete my Facebook and Instagram accounts a few months ago. I am finding that it might be harder than giving up Pepsi and candy as I try to quit reading or watching the News. I am approaching my 48th hour of not reading any online news or tuning in on TV news. My Twitter account has always been a 'sports only' reader type account, so nothing to delete there.

I had to take some feeds off of my Feedly account. I decided I no longer needed to be informed. That was my excuse for checking news, then I would end up reading and getting mad. I'll stick with book reading, sports, playing Mahjong, walking the hounds ... basically anything that doesn't deal with any kind of News. A friend of mine told me he has accomplished this and feels 100% better.

The sun is trying to come out and that's a good thing here in 'the tropics' of Southern Indiana.
By Steve at 8:46 AM