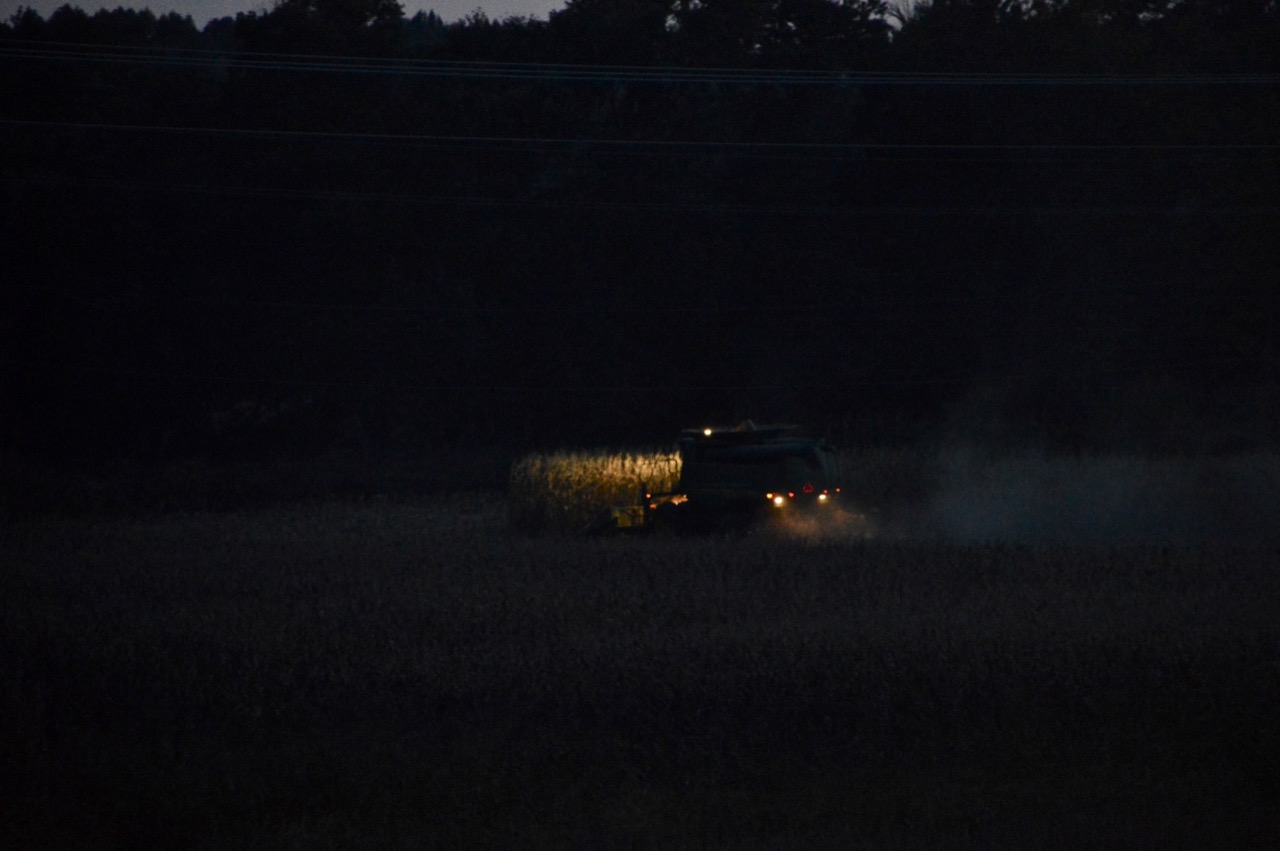 When things don't go as planned you end up picking corn in the dark. I am not sure what the reason was for the delay yesterday afternoon but it turned out to be a very long day for whoever was driving the combine. By the time I returned from Best Buy around 12:45pm today, they had finished picking the corn and were loading the trucks to haul it away. Interesting Best Buy story below. You'll also see that Stella ran more today than yesterday and the past year. 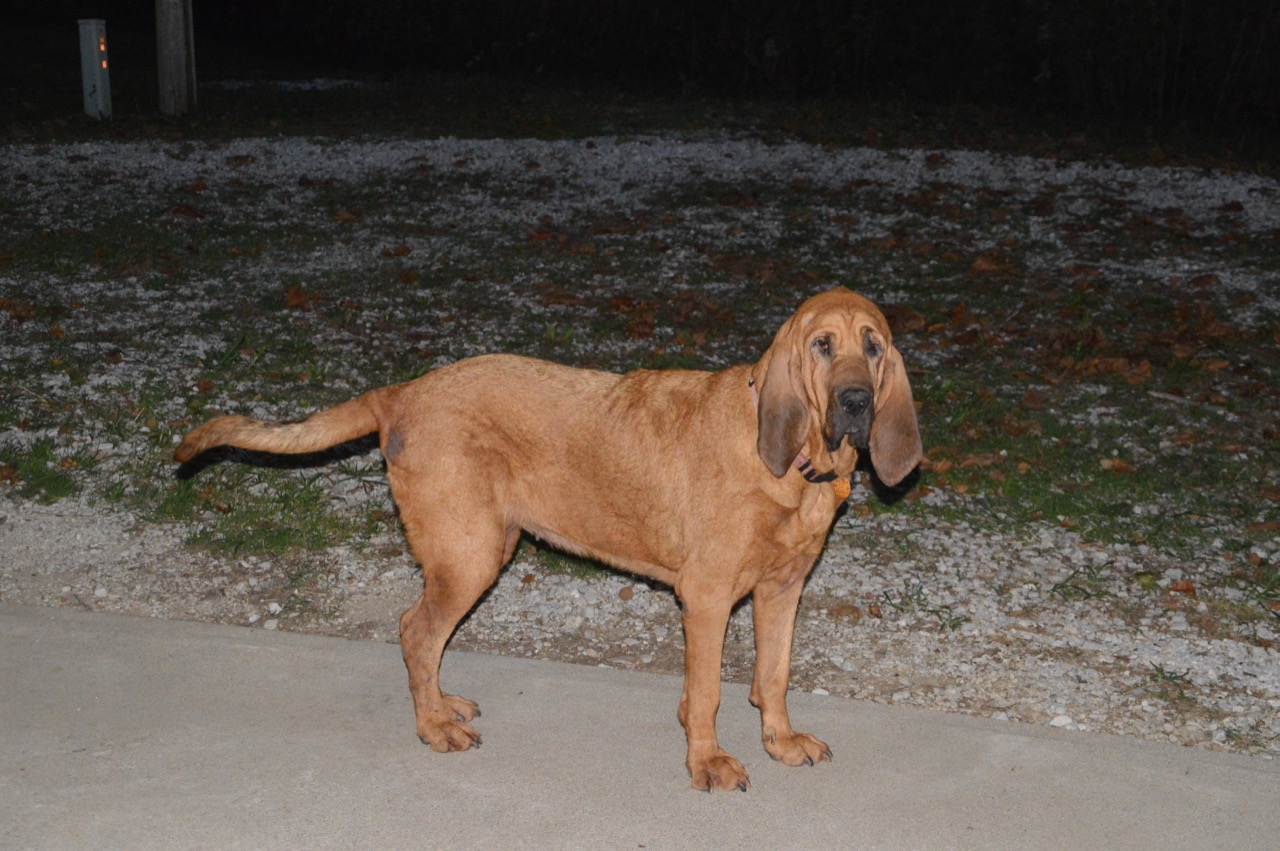 For the camera to focus automatically on the combine in the dark I had to turn on the flash setting. That is one reason this photo of Stella looks brighter, but if you look at the next photo it was not even dark yet ... all three photos were taken within minutes of each other in different directions. 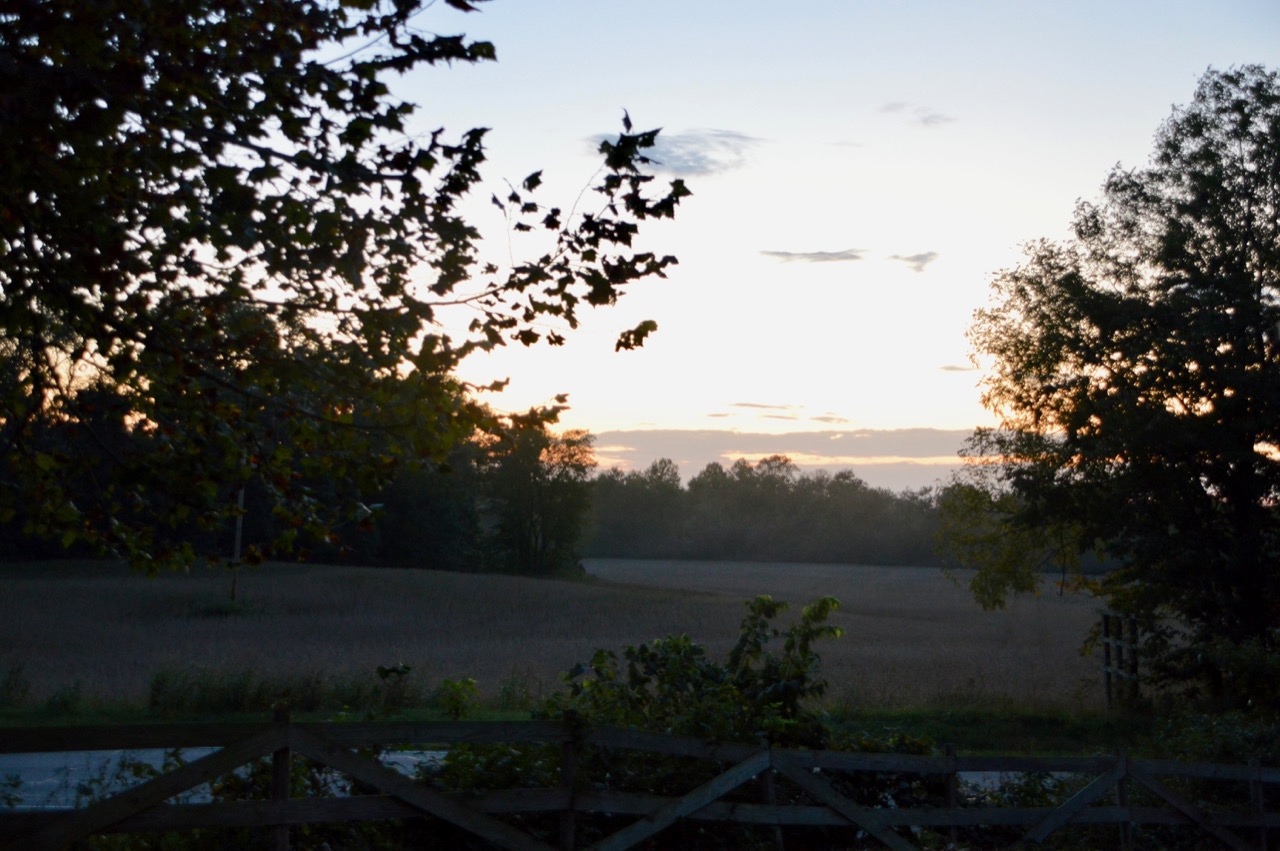 Heidi followed Stella outside to see what all the excitement was about but she didn't want her photo taken. She kept turning her head away when I pointed the camera at her. I barely caught her as she was looking from behind the wood frames in the carport. Notice the swelling on the side of her nose is gone. 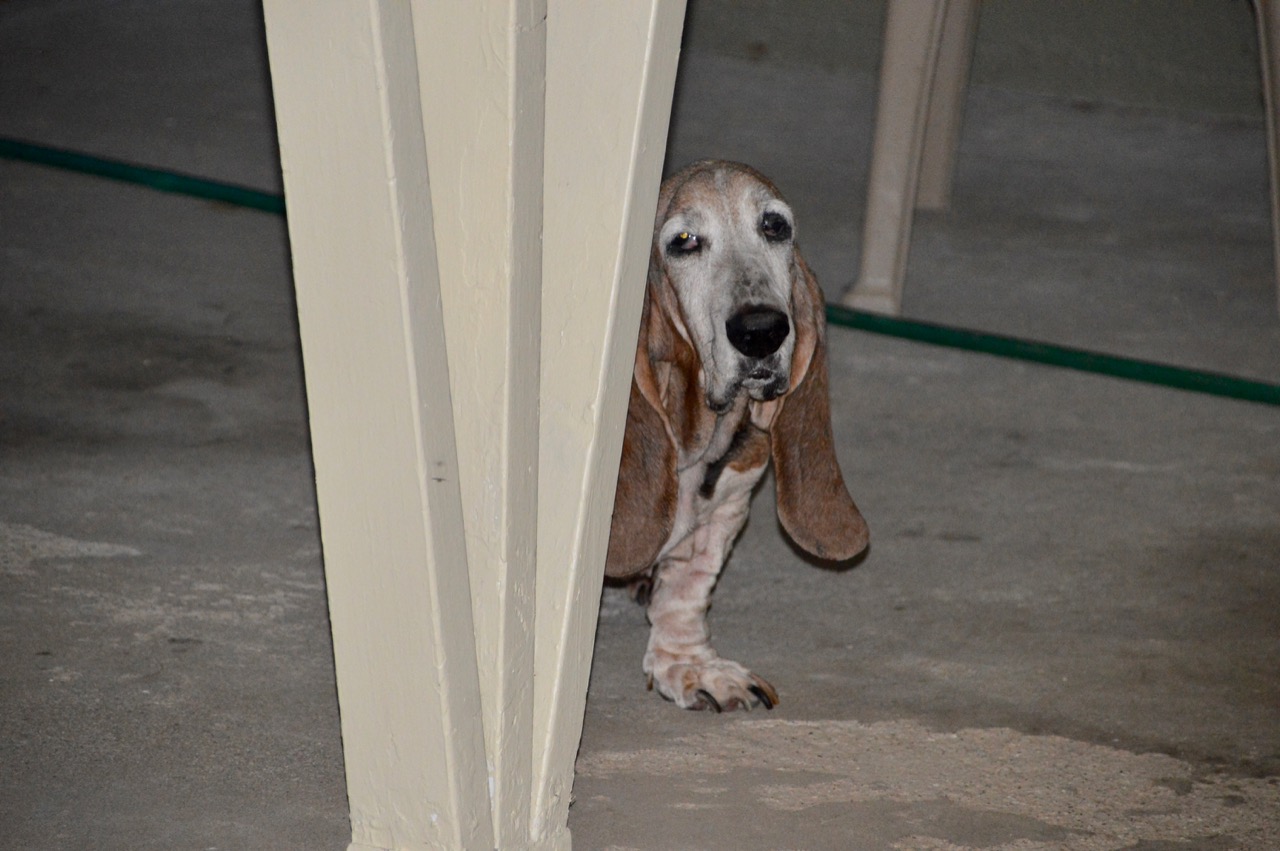 Looking at my weather app on my iPhone it's nice to see we have only three more days of hot weather counting today. It will take an immediate 15° drop on Wednesday and continue to lower our high temps for the day from 65° down to 54° a few days later. Since it wasn't that humid this morning the temperature on our walk didn't feel that hot. Stella was not bothered by it and actually had whined earlier to come outside. 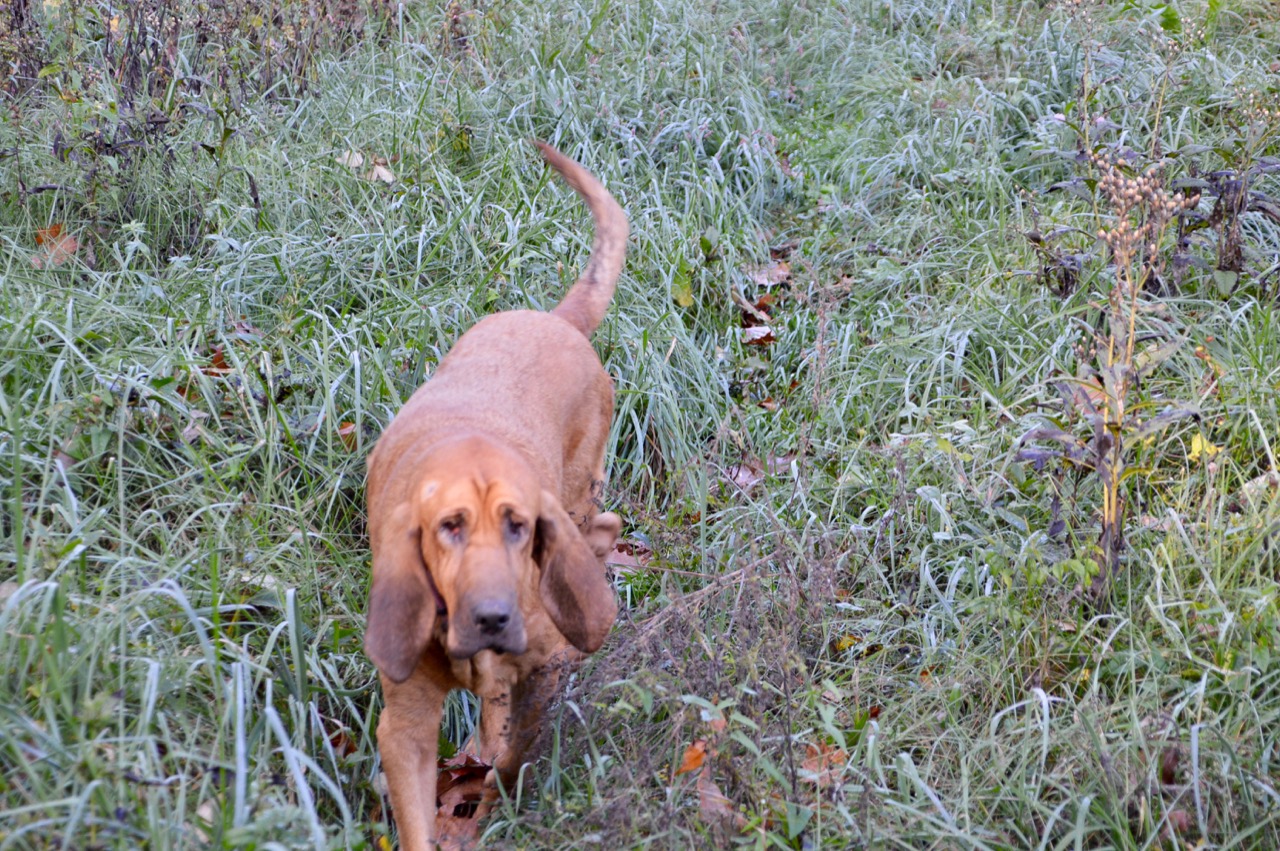 I may have mentioned here, can't remember, that the strap to my Garmin VivoSmart3 broke a couple of weeks ago. I didn't take long to go online and buy a replacement, same model3 instead of the new 4. I received it two days later and started wearing it. After the fact, I did an internet search on why that strap broke, was it common etc. The answers led me to the Garmin forum where the same questions I had were being discussed. 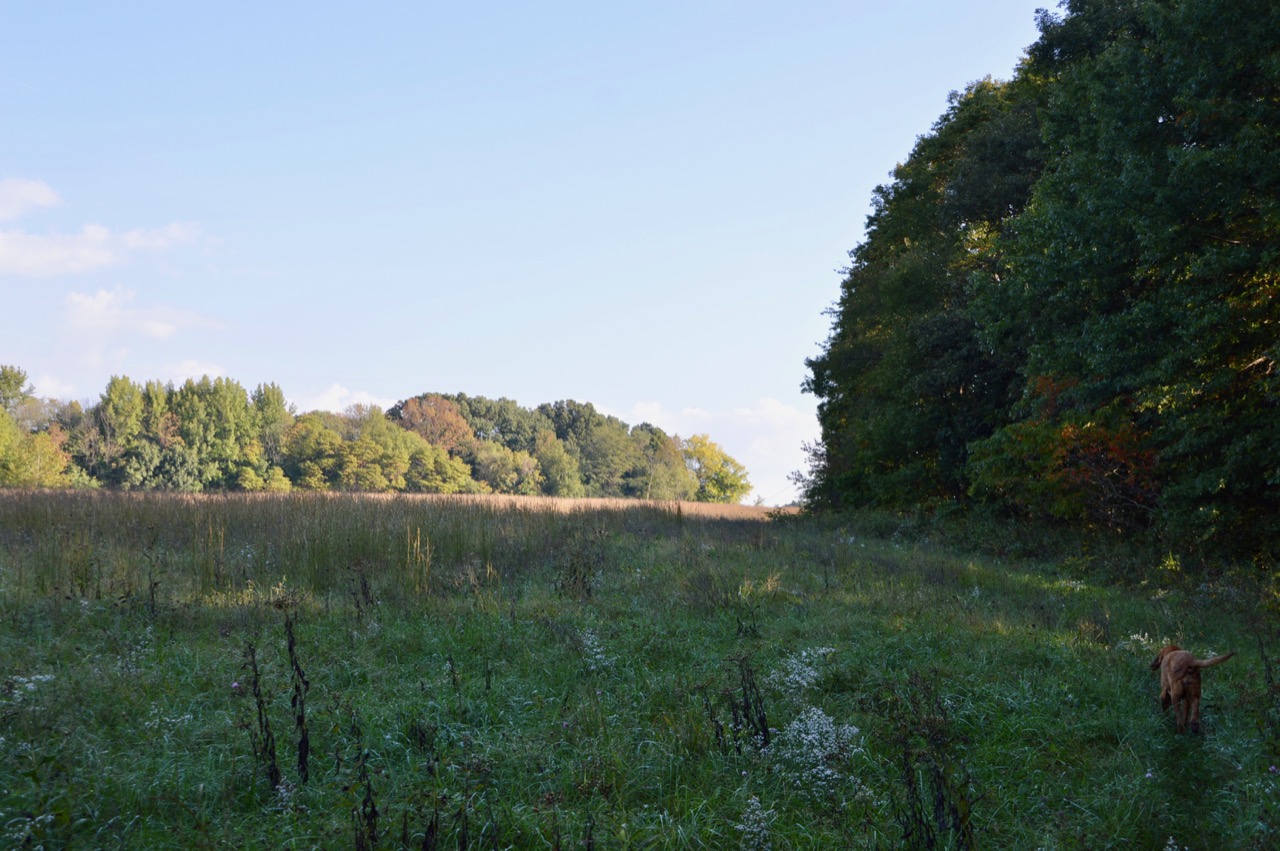 I sent an email to their support address listed not really expecting any kind of answer. Instead a few days later I received a reply telling me they needed my name, address, phone number and serial number of the activity monitor (what I call a watch). They shipped me a new replacement at no cost to me. I received it on Saturday, deleted my recently purchased unit from my Garmin Connect App and then synchronized my replacement with my iPhone.

So that meant if I wanted to get a refund for the one I bought 14 days ago I'd have to make a trip to the local Best Buy store. I headed over this morning to do the exchange and look at some cameras I was interested in again. It wasn't a normal trip though ... a little crazy. 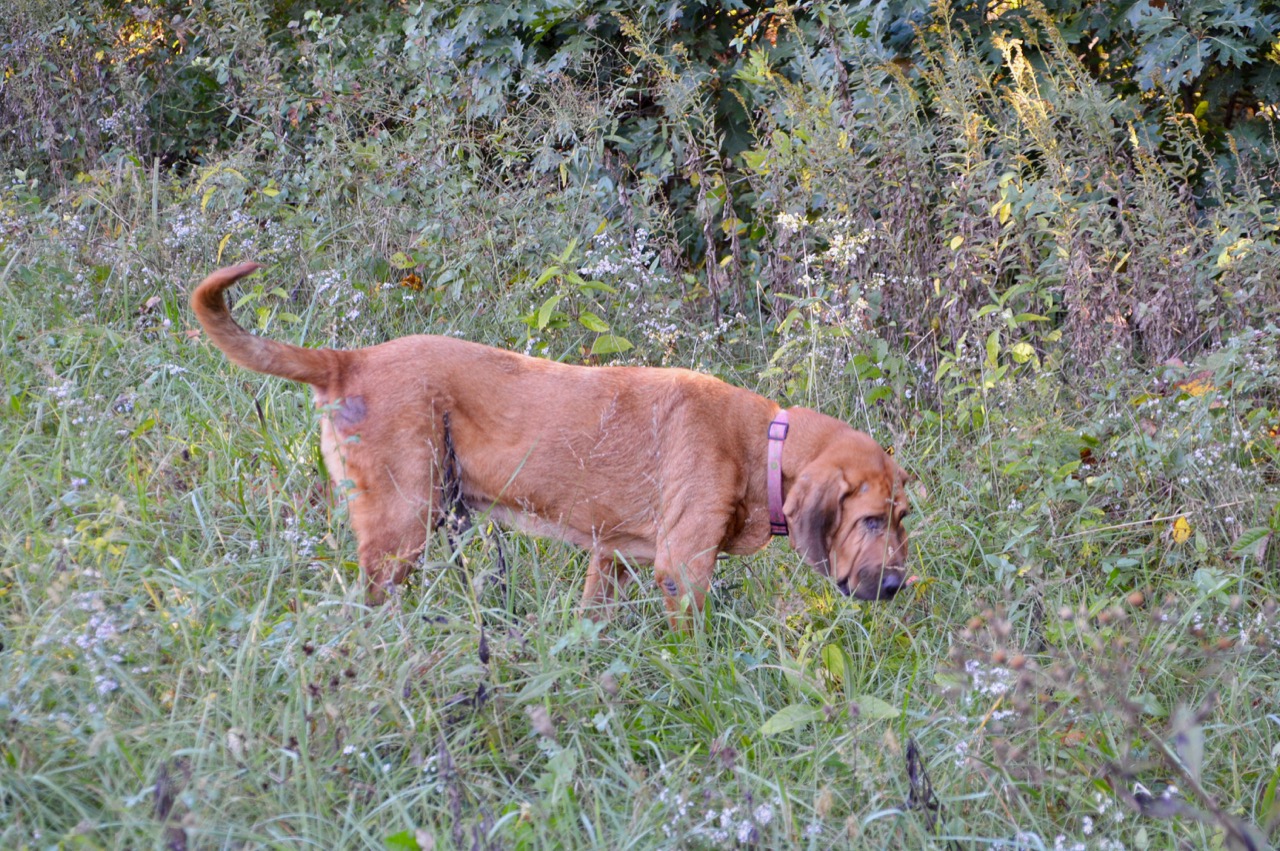 I tried to get ahead of Stella in the first part of the walk after we made our first turn at the corner of the woods. She was lingering behind so it gave me a chance to get out in front so I could see if she would run to me to catch up, in a different part of the field. She did .... she ran hard. If you see her ears flopping or not in view ... that means she is running at a pretty good speed. 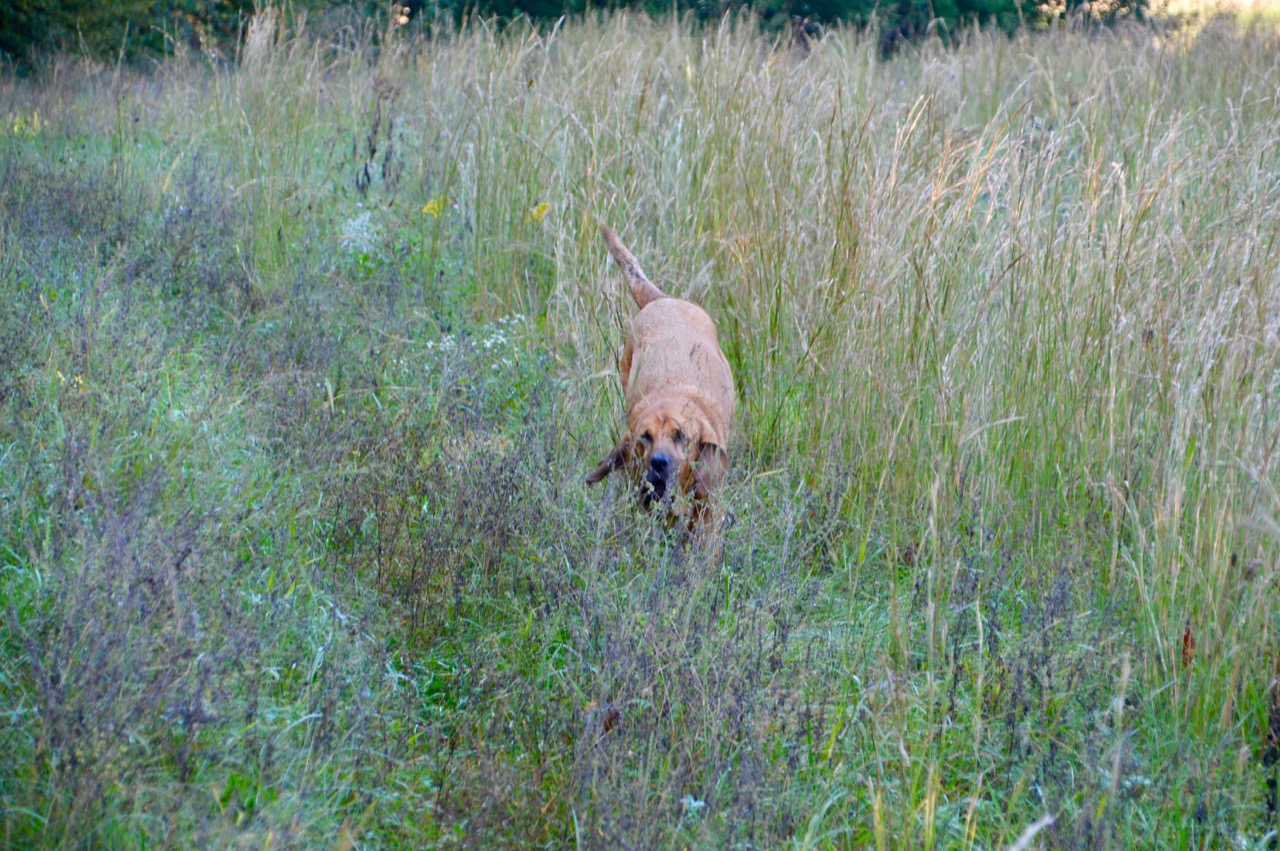 As far as cameras, which is the lead into my Best Buy story, I have always been amazed by the clarity and sharpness of Mark's photos on his blog BoxCanyon Blog. We have traded emails on photos, camera etc over the years. I started by asking what kind of camera he was using. He uses on the of the older models of the Canon PowerShot ELPH's. So I wanted to look at one of those today, hold it in my hand to get a feel of taking photos with it.

I also wanted to look at the Nikon Coolpix B500. While looking at both cameras on a shelf with a few other Canon and Nikon point and shoot cameras, someone asked me if I wanted to know what the best camera was on that shelf from 8 different models and two brands. Before I let him know, "not really" ... he gave me his opinion and without wasting a second told me he won his MMA fight last night in Milwaukee ... (250 miles from me).

What gave me a hint my enjoyable time looking around the store at things was about to turn into one big hassle? I couldn't escape him and even the Best Buy employee walked over and started playing along with this man's question and answers. 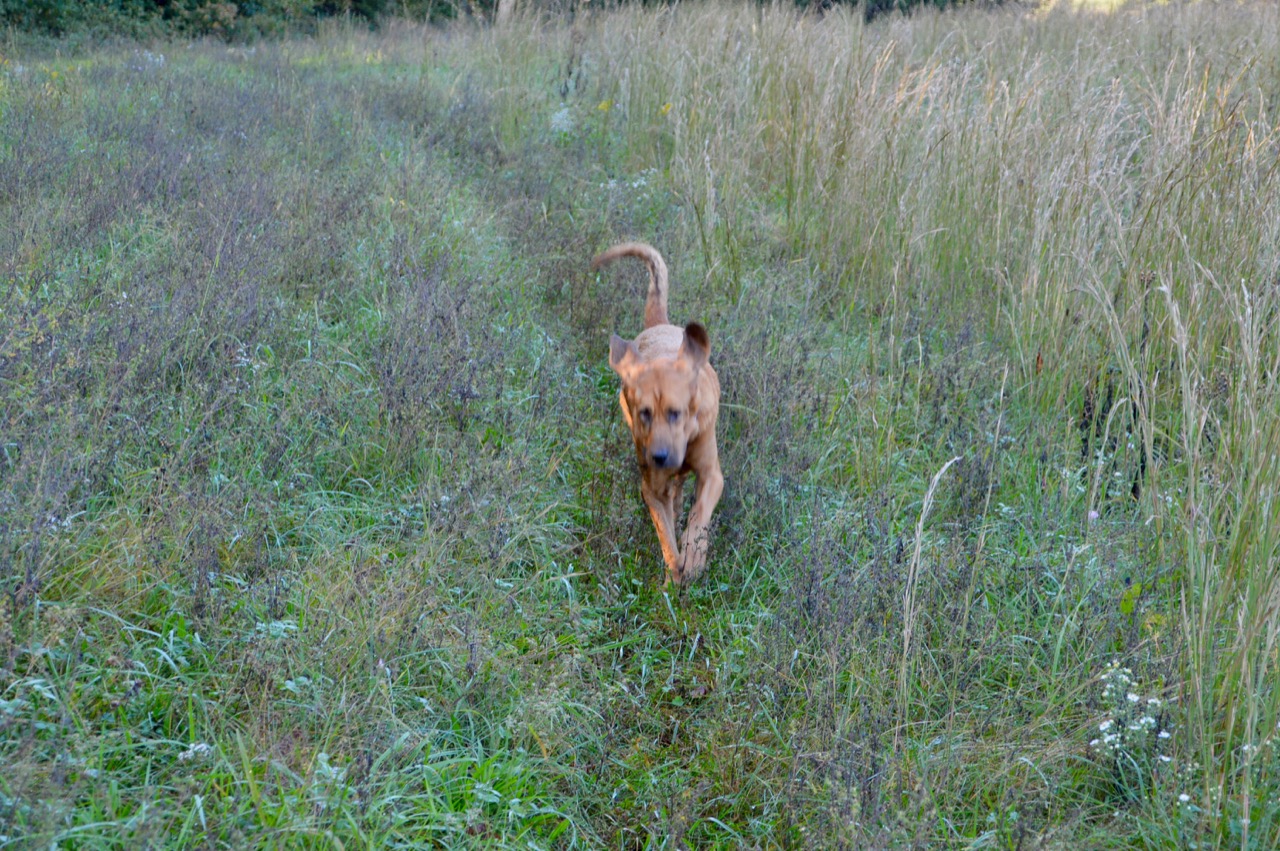 While the employee and I discussed the different cameras, this guy moved in-between us because he was the camera expert. While he talked I was planning my escape. I slowly moved away toward the Apple Watch and MacBook Pro table while the employee was cornered by the "MMA Champion" who had won a car, cash and showed me his bloodied knuckles.   LOL 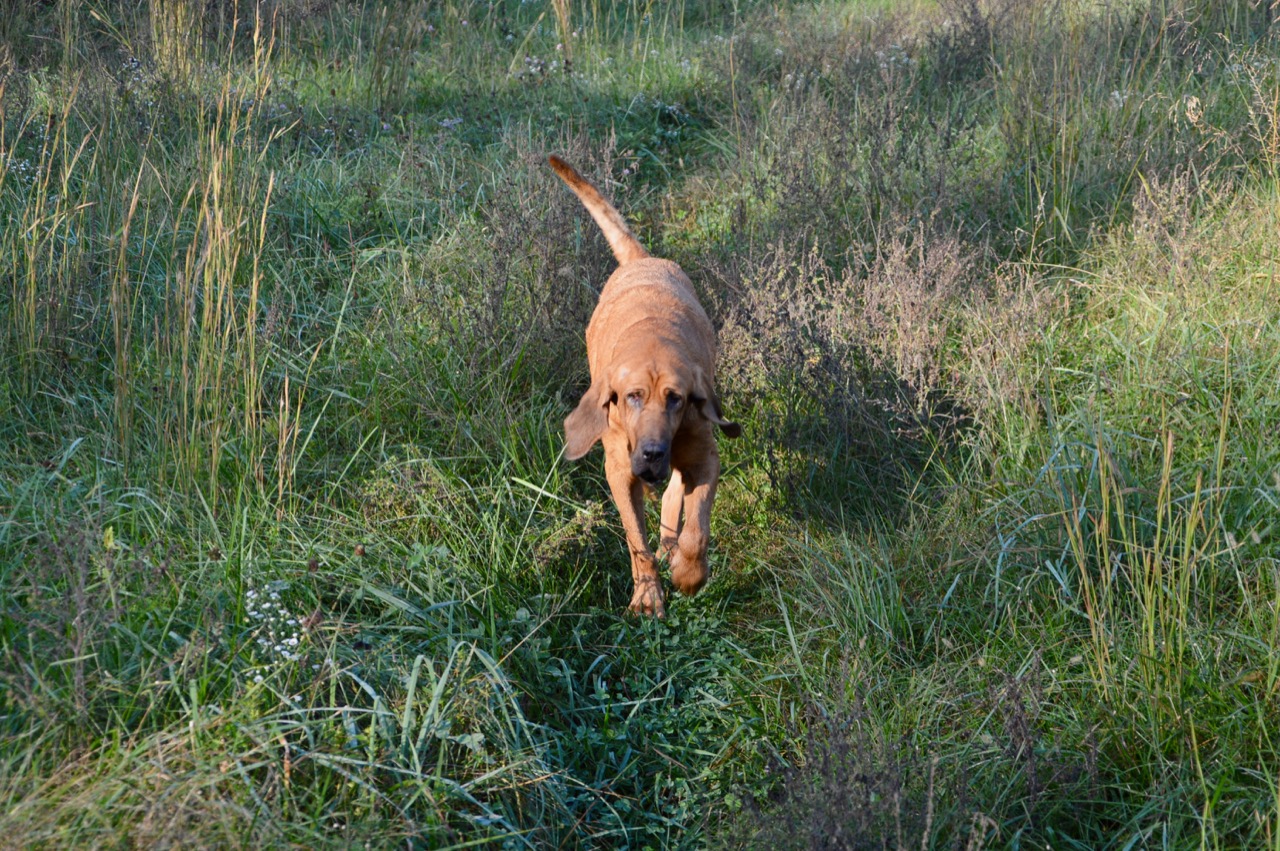 I had just picked up the Apple Watch 44mm on display to get a feel for it. I found out my 'expert' was also an Apple Watch expert. I could not believe how fast he found me since the camera and computer departments are a good 40' apart. This time the conversation changed from the Benz he had won, to gambling casinos etc. Our conversation ended when he was telling me he had given the cash he won for fighting to his newborn child and had only $7 left until he received his DISABILITY CHECK next month !!!!! I had a feeling he was about ready to ask me for some money.   LOL

You probably get the picture.

Other employees stood and stared talking amongst themselves not really showing any kind of interest in getting this creep that smelled like he had been on a 7-day drinking binge away from me ... finally a Best Buy employee moved in between me and the 'expert' and I walked away. I was almost to the door to leave the store when someone said "what did he say to you" ... the voice of a Best Buy Manager. After I told him the story, he said he would take care of it. I didn't want to be around when the manager confronted him, so I got in my car and headed off for home.

On our walk this morning when I saw Stella raising her nose turning to the field behind us I didn't know that she would also start walking that way, even looking to see if she could get over the worn down metal fence. I saw no deer, no other dogs, nothing that would lead her into the next field, except what her nose was smelling. 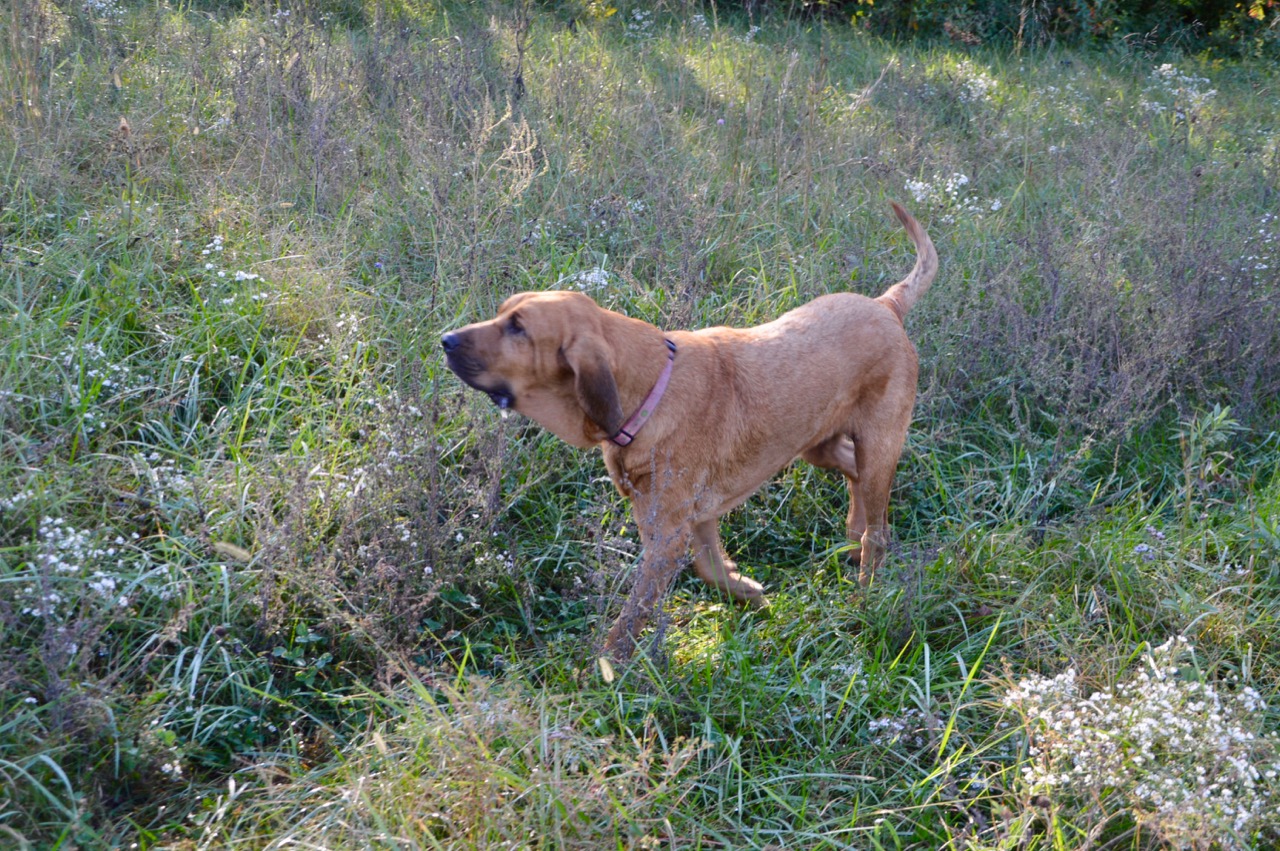 I let her look around and she eventually started my direction. 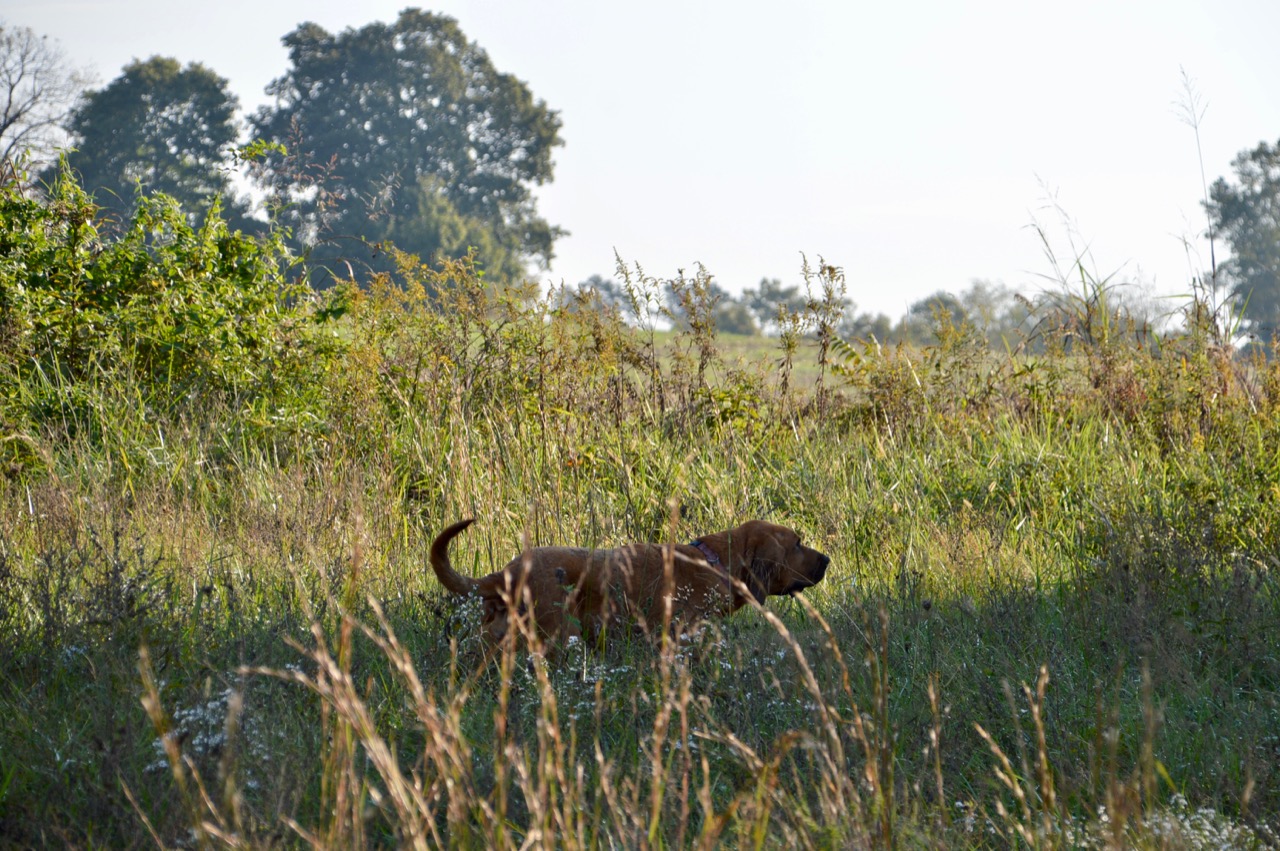 Back to the camera discussion ... the Canon PowerShot ELPH felt too small in my hand plus it didn't have a good place to put your thump while taking a photo. I could see why some buyers had written reviews complaining of blurred photos. It would be easy not to hold the camera still for the perfect photos like Mark takes.

The camera I really liked was the Canon PowerShot SX-530. It felt lighter than the Nikon Coolpix B500 and felt more comfortable in my hand. Another big difference at least for me, the Canon ran on a rechargeable lithium battery, where the Nikon Coolpix used four AA batteries. I'm not a fan of AA batteries even if they are rechargeable. Of course by that time it was really hard to continue my analysis of both cameras with the 'expert' a foot away from me talking non-stop.

I already knew from my online research before I made the trip to Best Buy that the Canon PowerShot SX-530 was not in stock at the store I would be visiting. 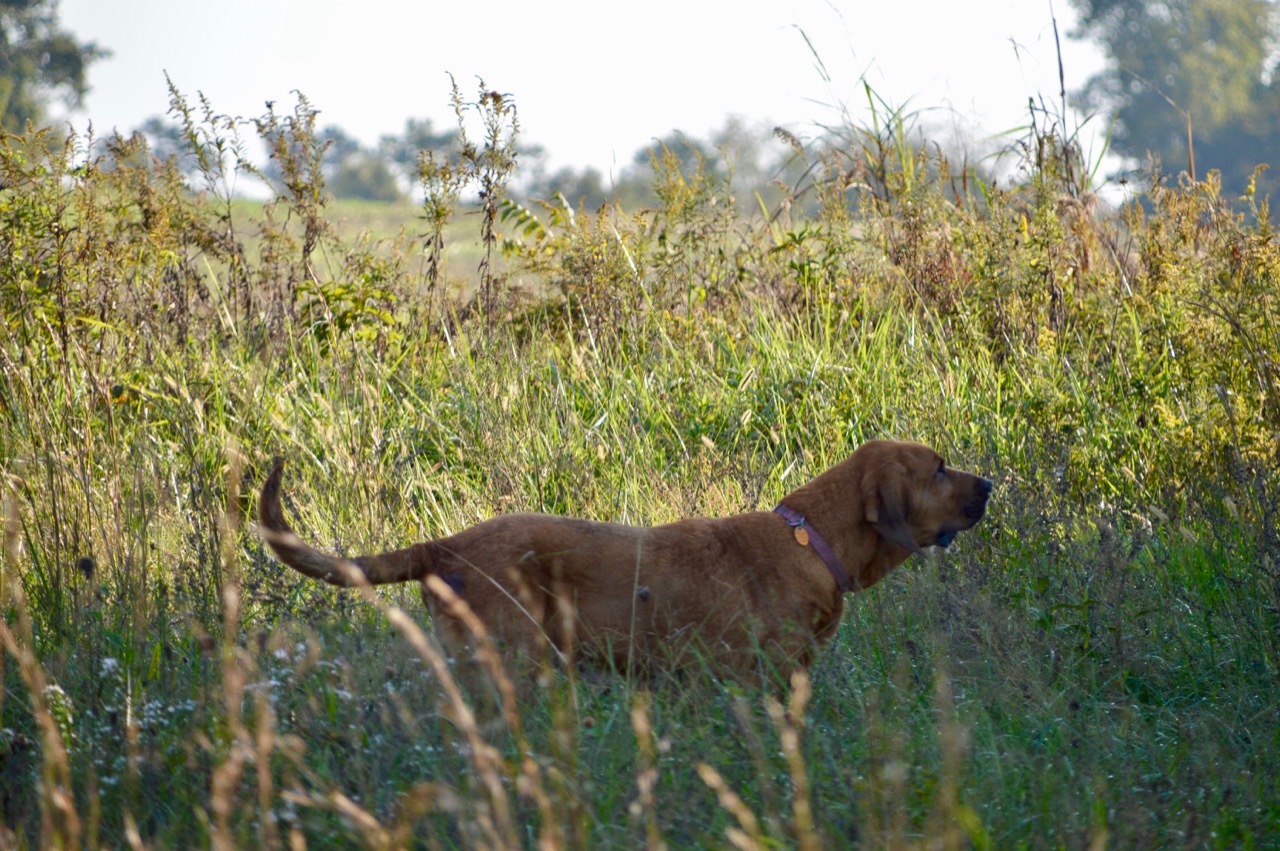 While I made the 30 mile drive to the store I wondered what my sudden urge to buy a different camera was about. Was I tired of using the D3300 with a 18mm-200mm lens for 99% of my photos? I love my iPhone camera's photos but only for inside and low light conditions. Since I returned my Garmin and the Otterbox case I had bought a couple of weeks ago they gave my $50 reward back to me with a deadline of December something to use it by. So I could buy that Canon PowerShot SX-530 for $199 using the reward they gave me. 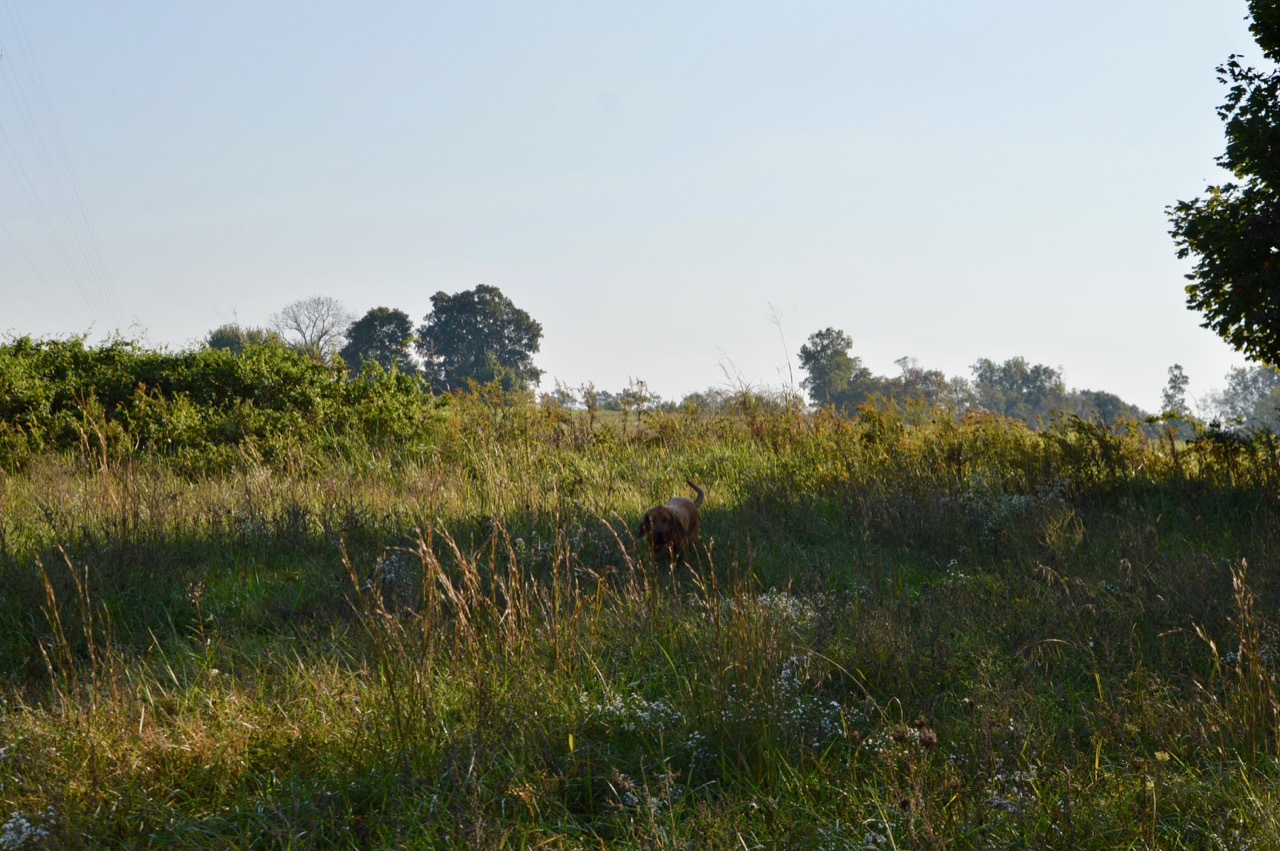 Stella started running toward me from the back of the field once she realized that I was getting too far from her. At this point of the walk, seeing her run hard two different times was good to see. 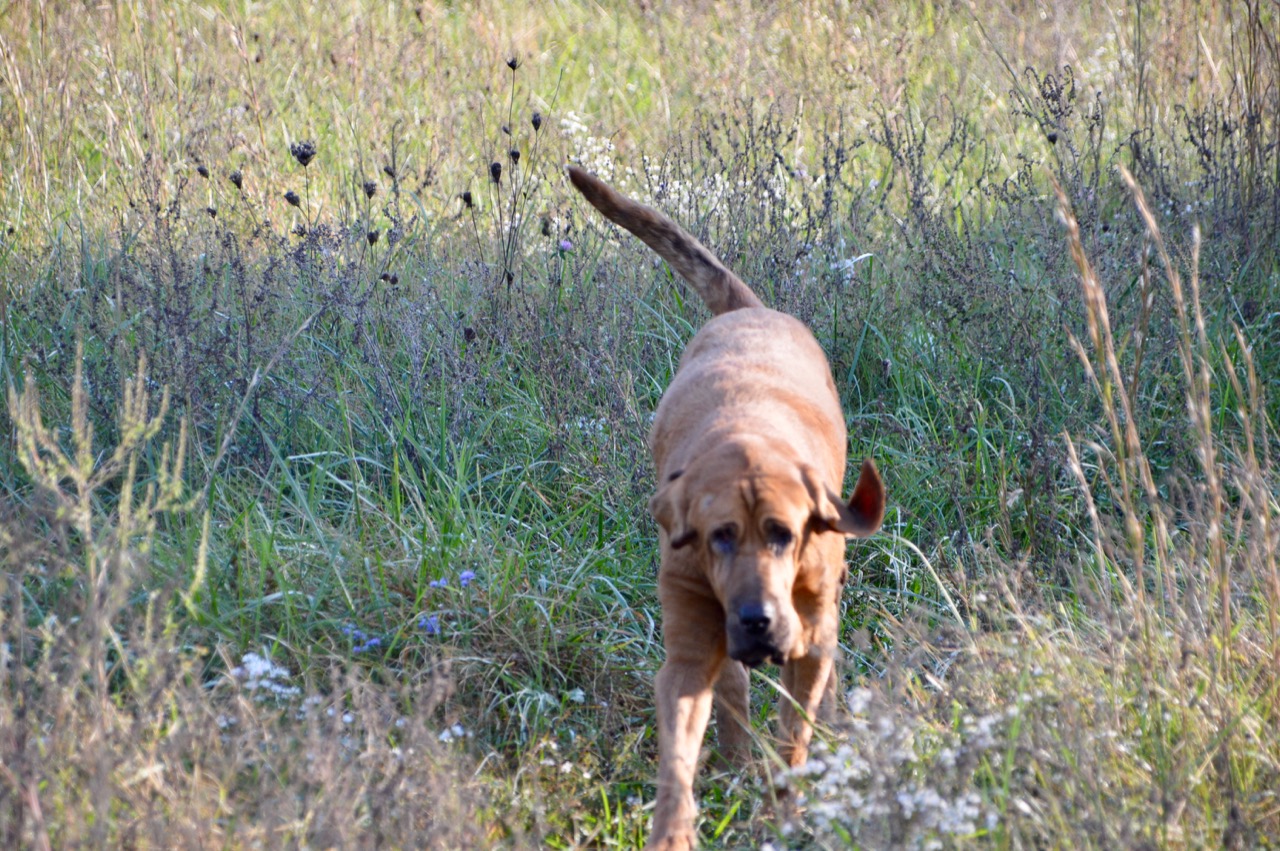 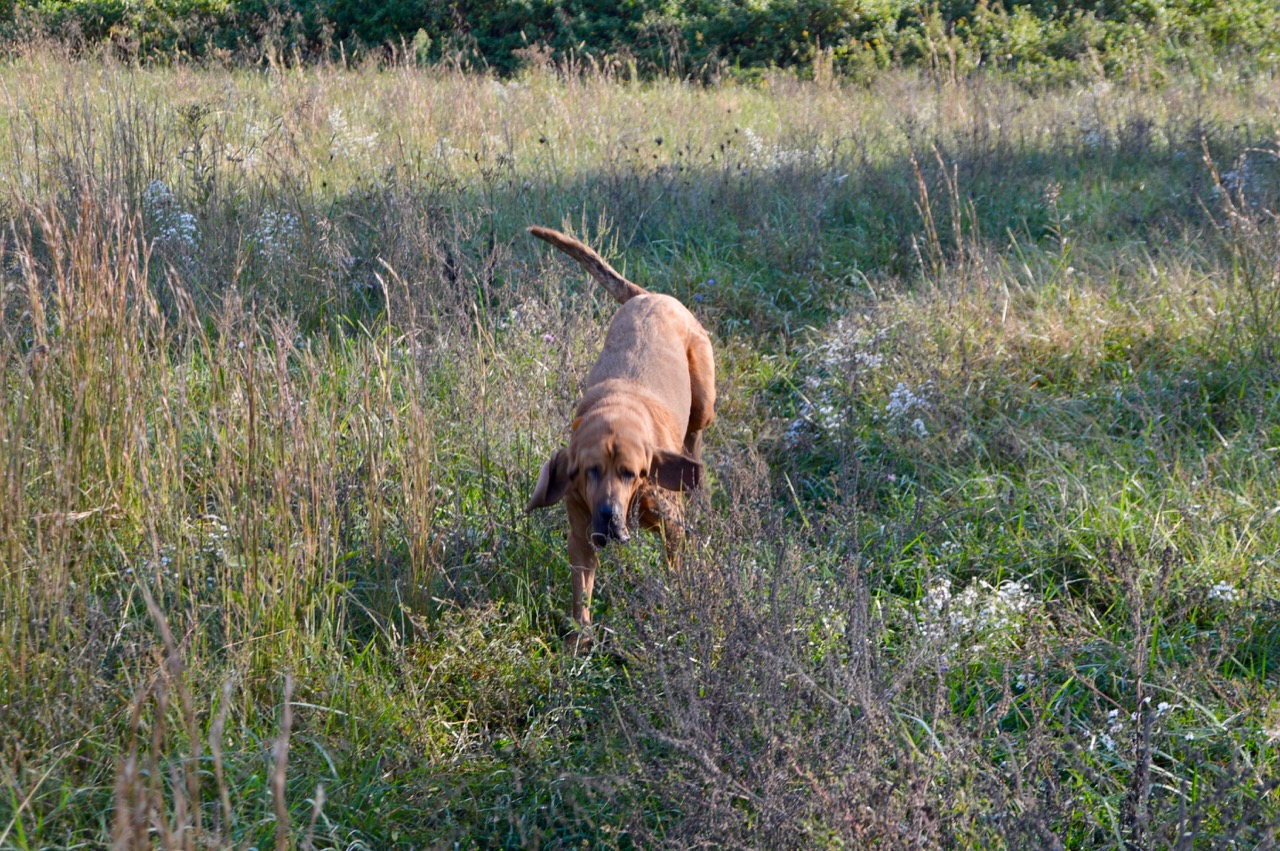 The ATVs did not return this summer. So the major ATV path from last summer has almost grown over. Stella needed to make sure and check out some scent along that path. 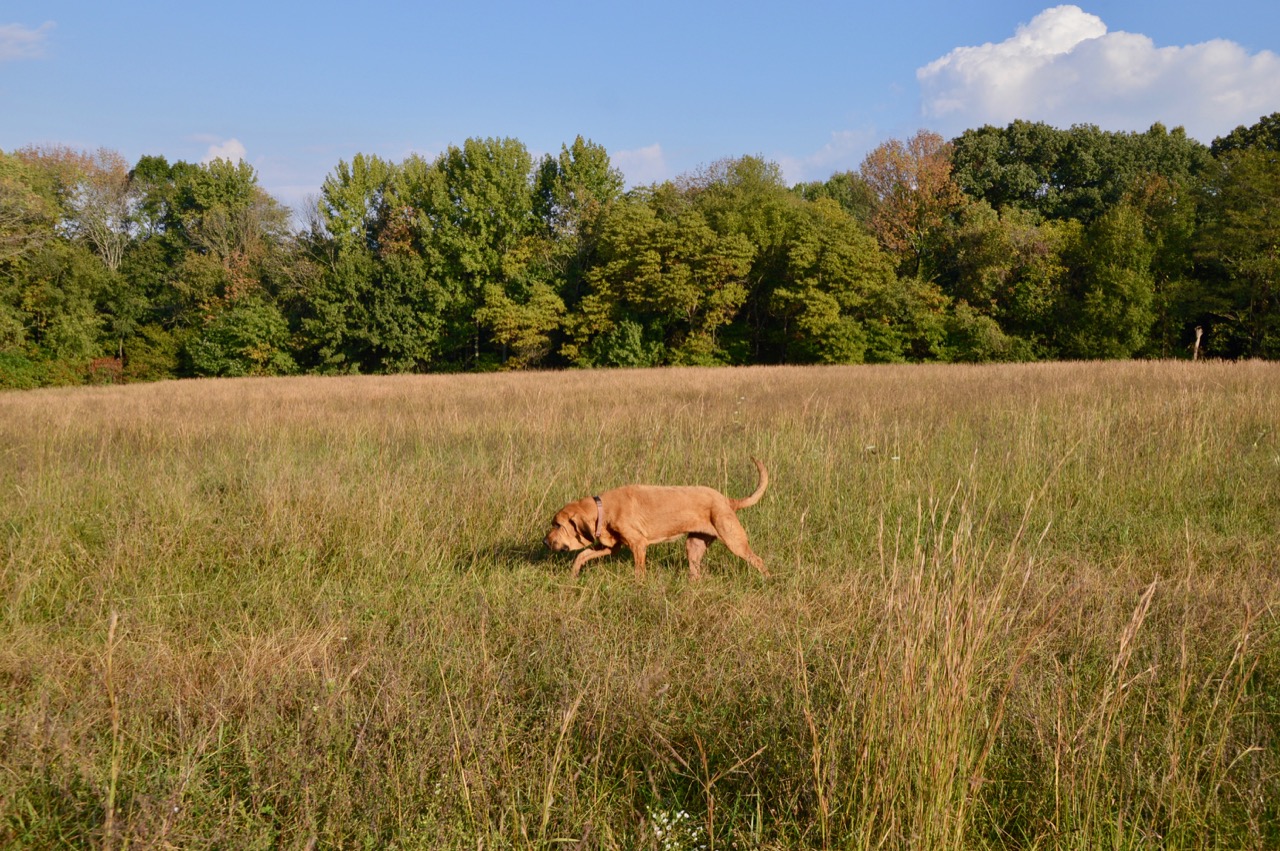 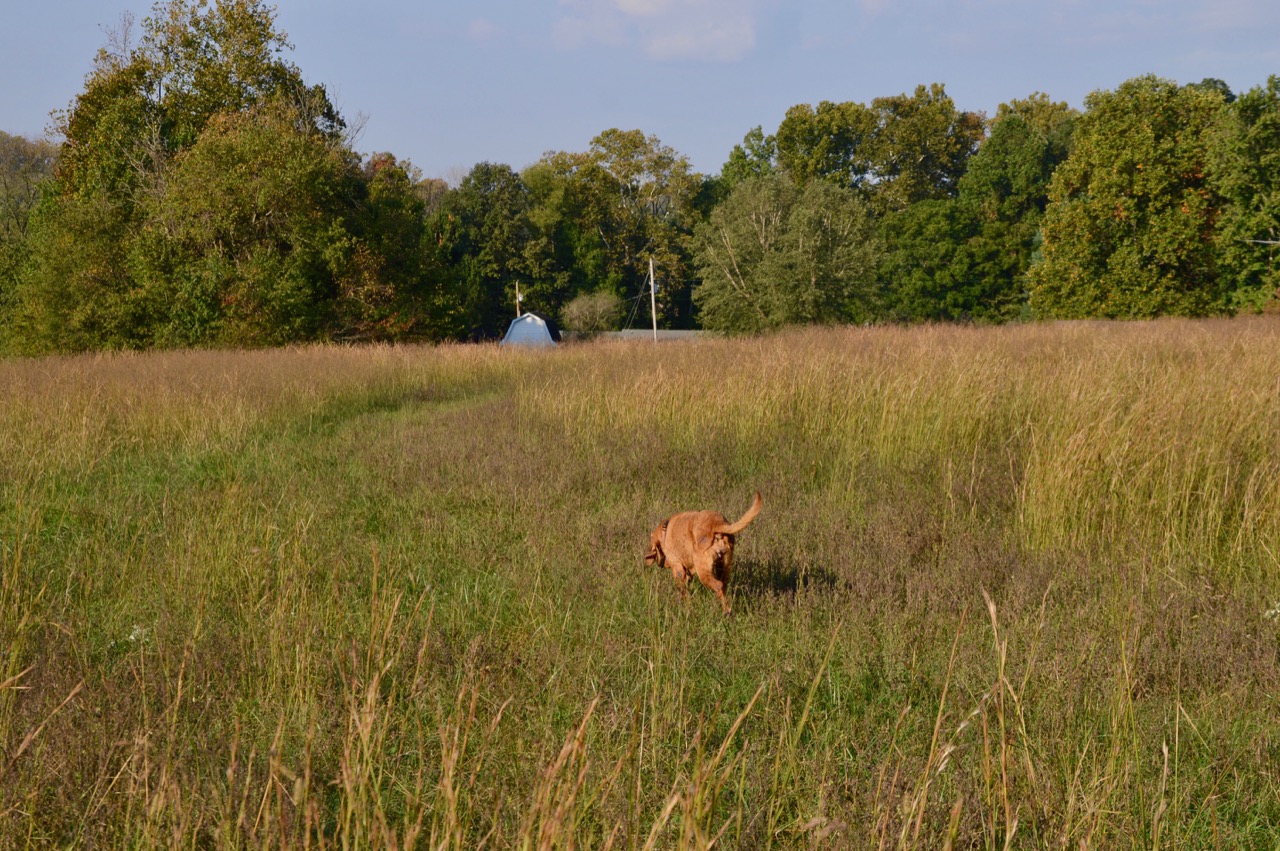 Once I told her "let's go home" she veered my direction and then stopped in the same spot of the path to scratch her neck. 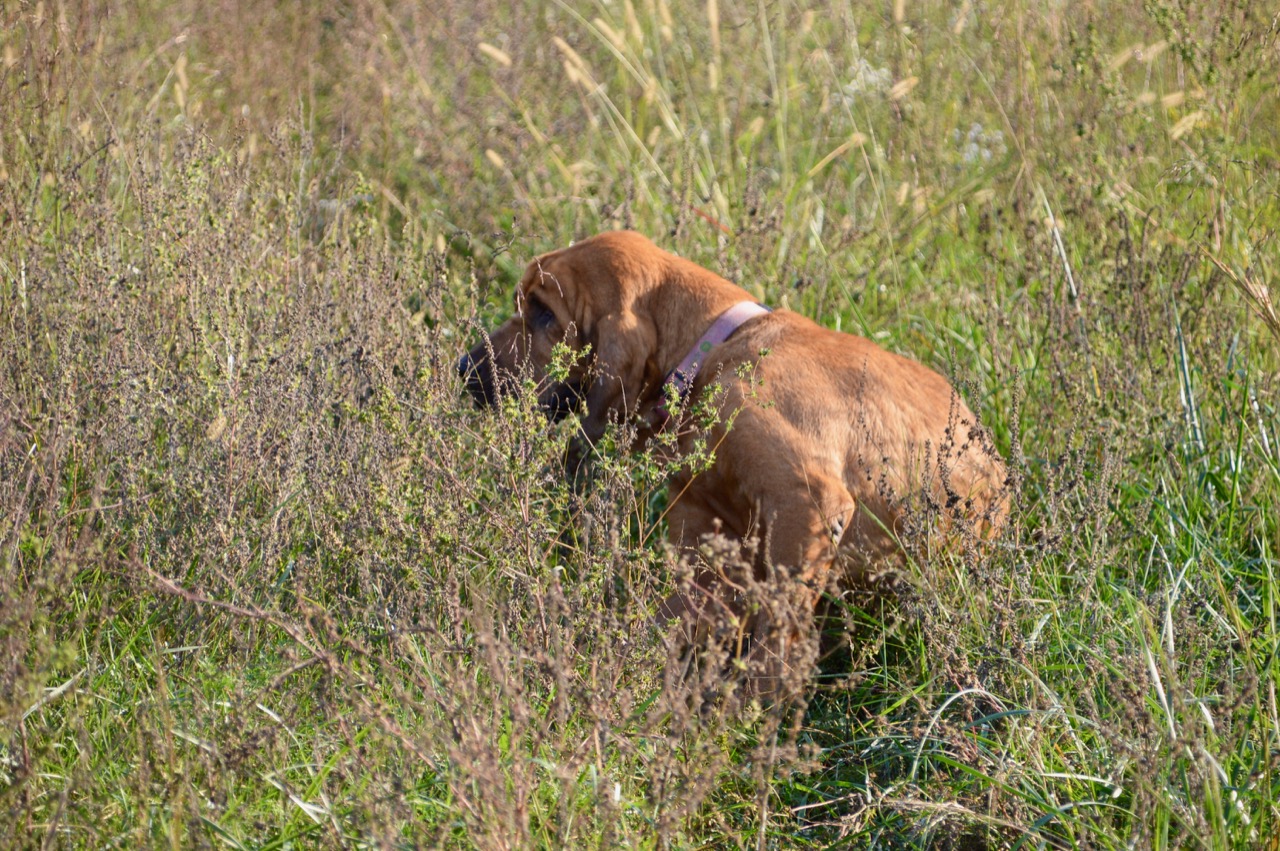 So again she is in the same exact spot she was in yesterday when she started running toward me for her third run of the walk. 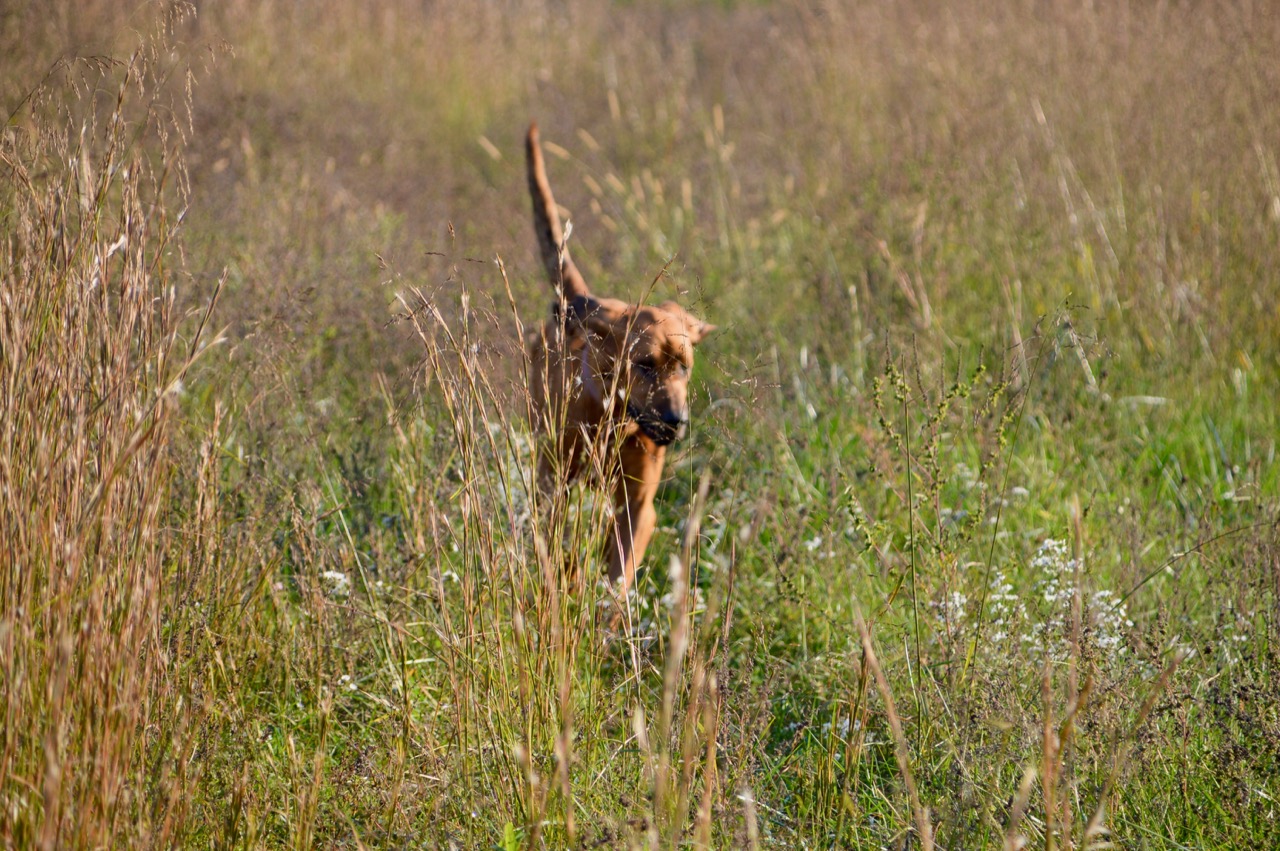 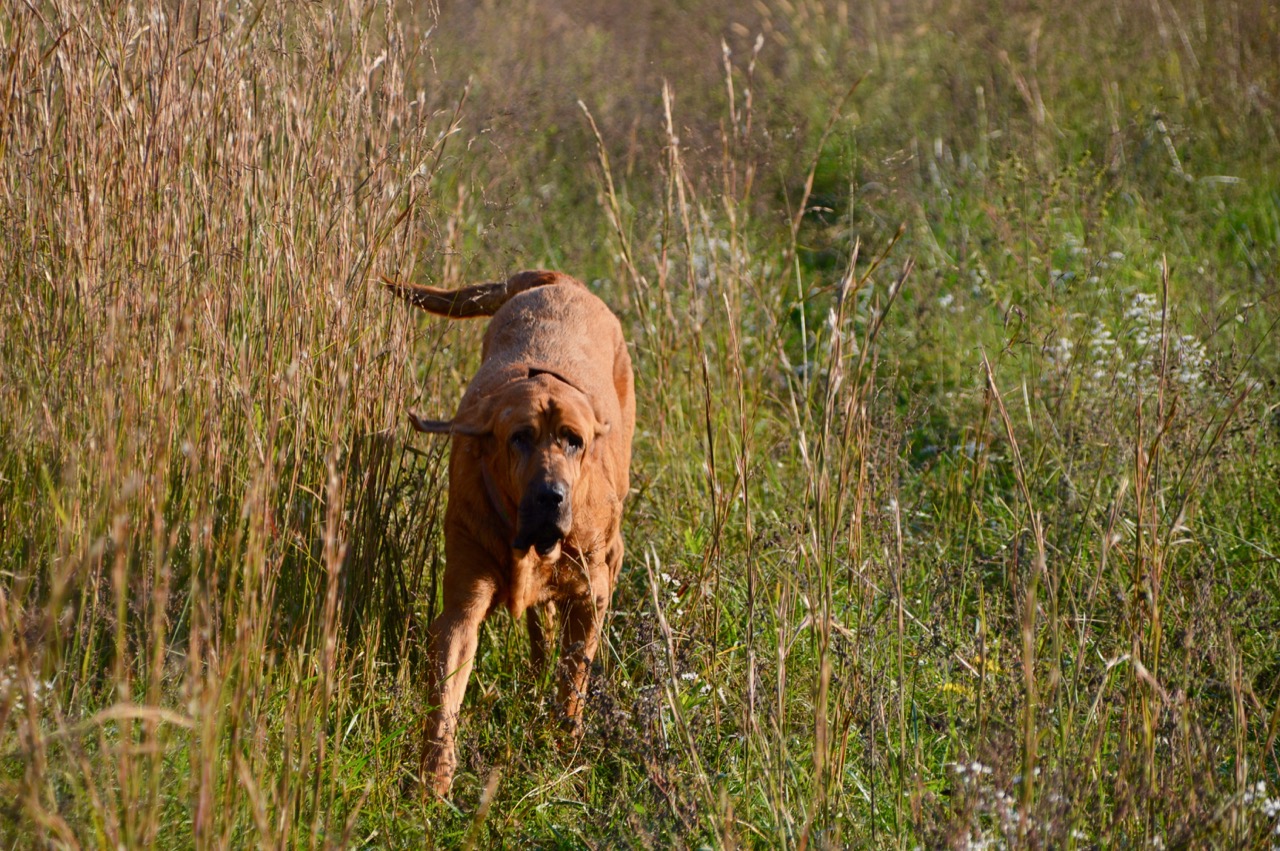 Like I said, IF her ears are not in view (laid back), that means she is running at a good speed. 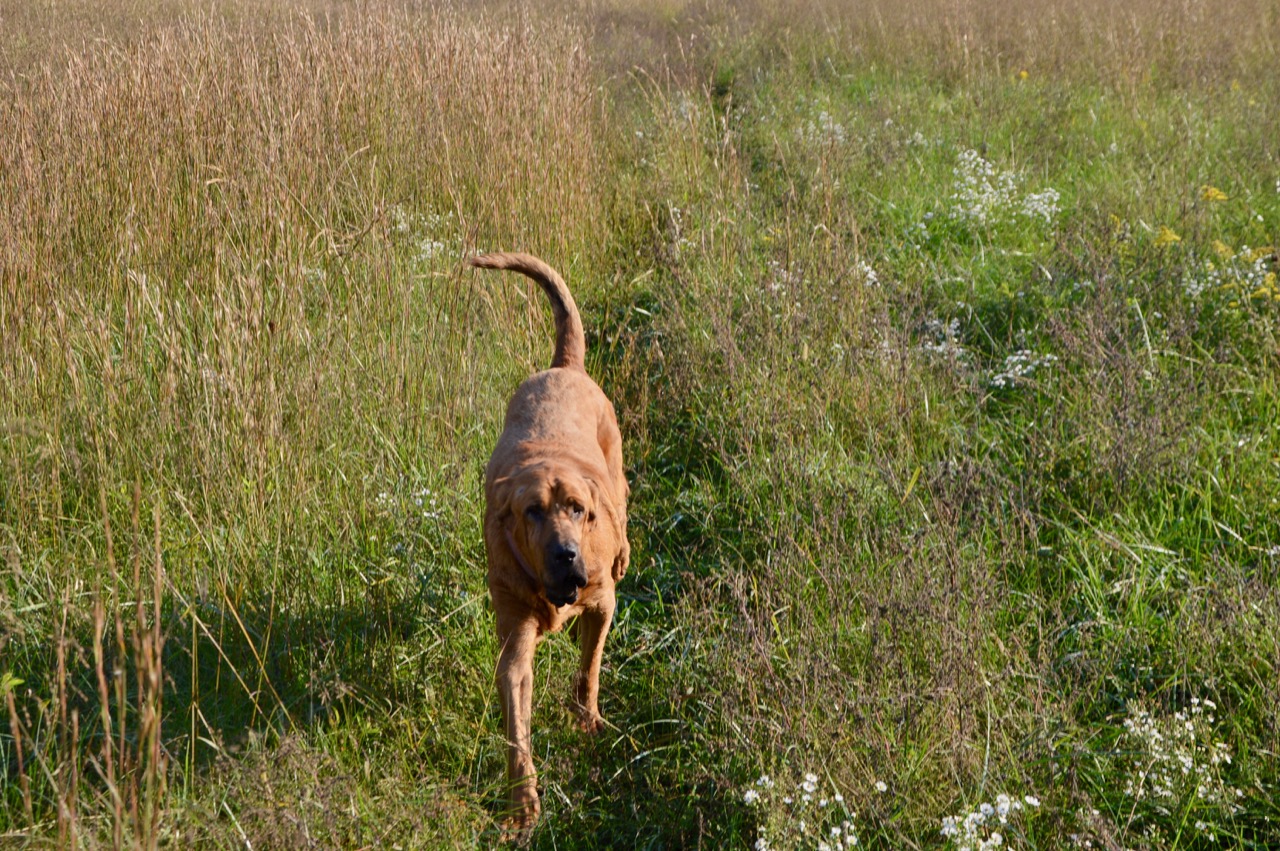 She still wanted to show me she had prowling capability in case a cat or bird would be found in the field. 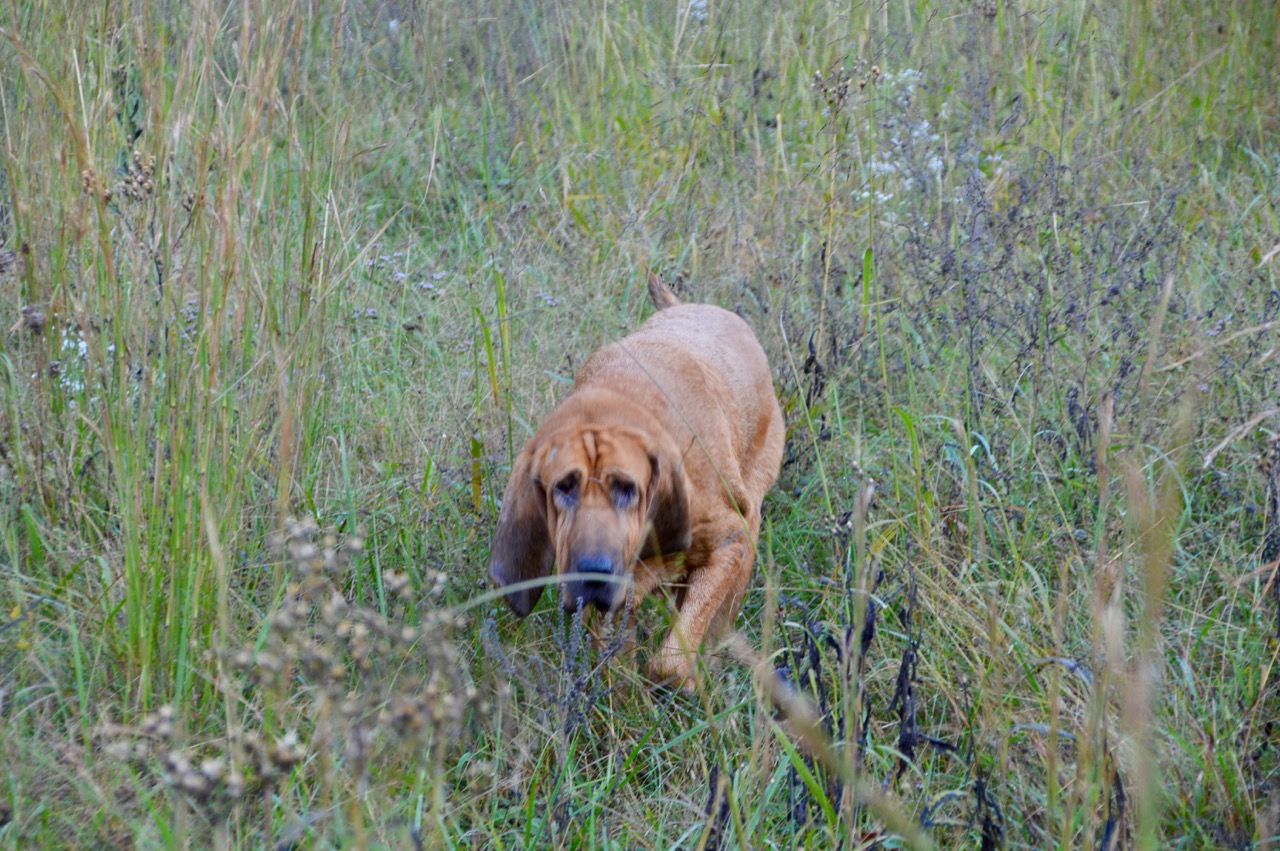 It will not be long before we start our 2018 Leaf Raking Project. 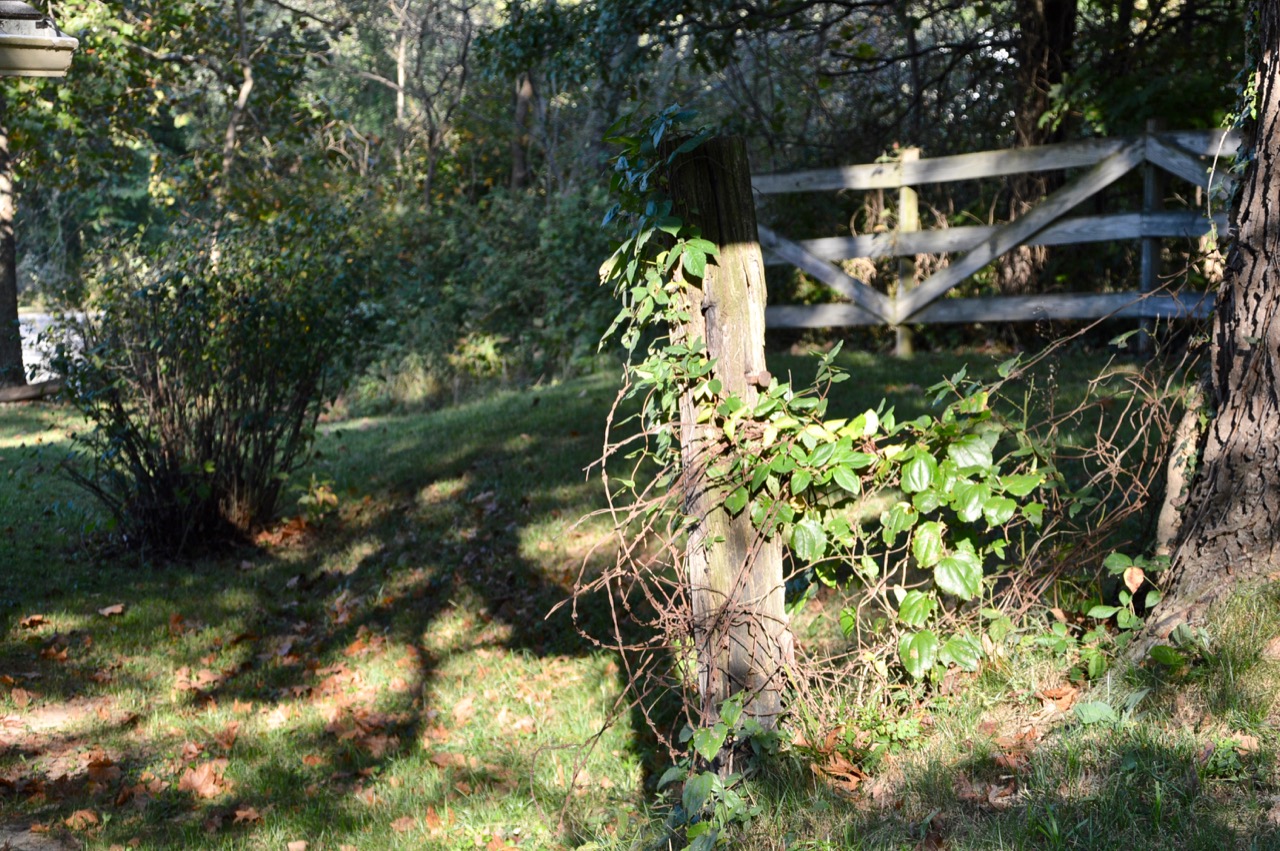 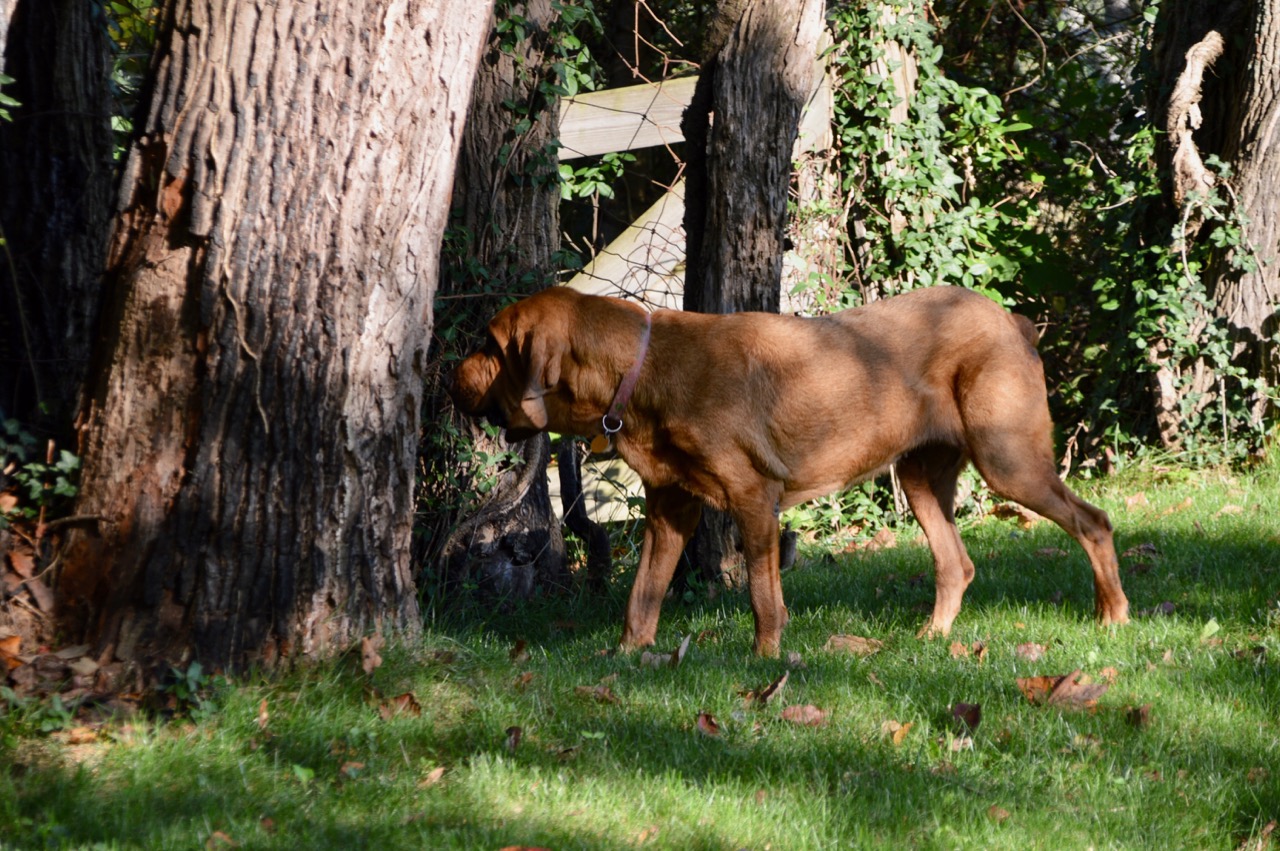 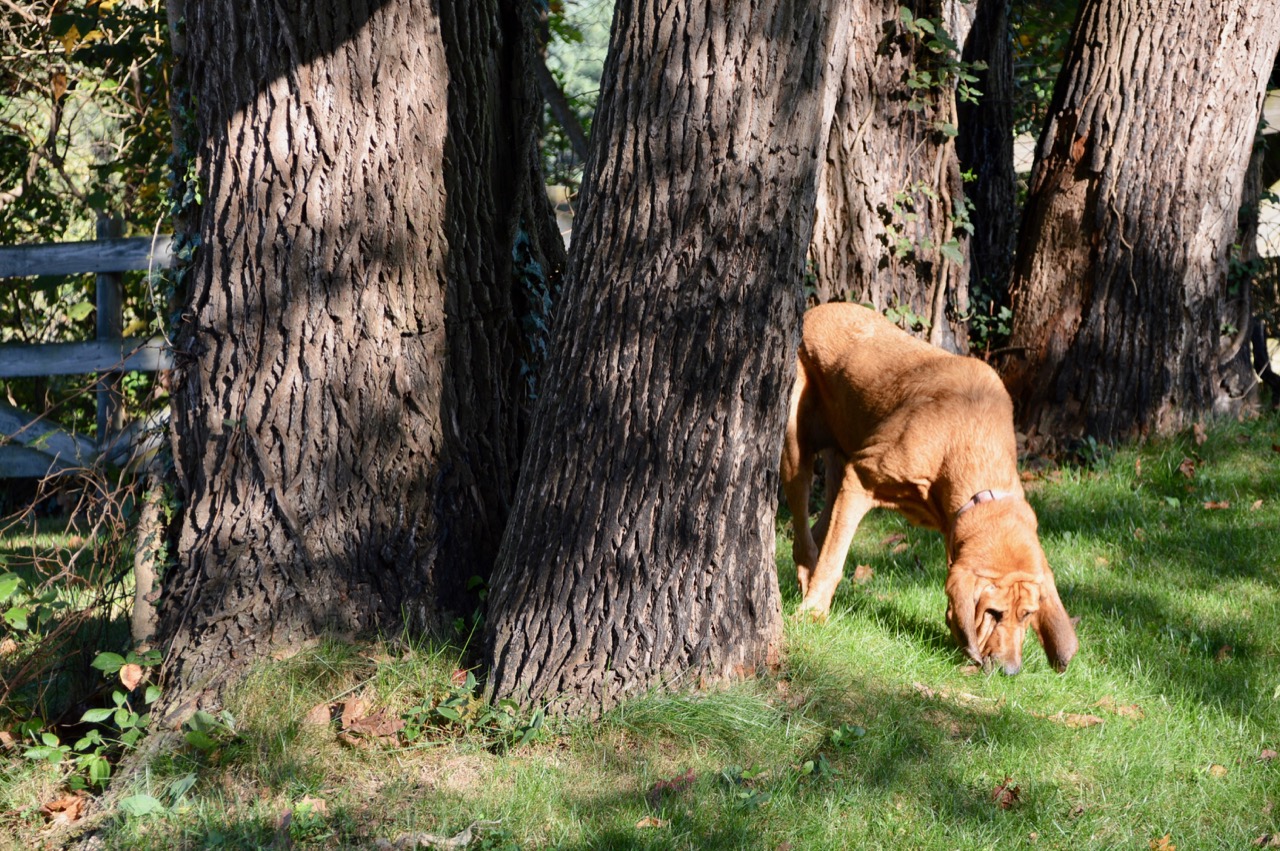 For the fourth time of the walk, she started running toward the house. Not a sprint but faster than a trot, more of a gallop. 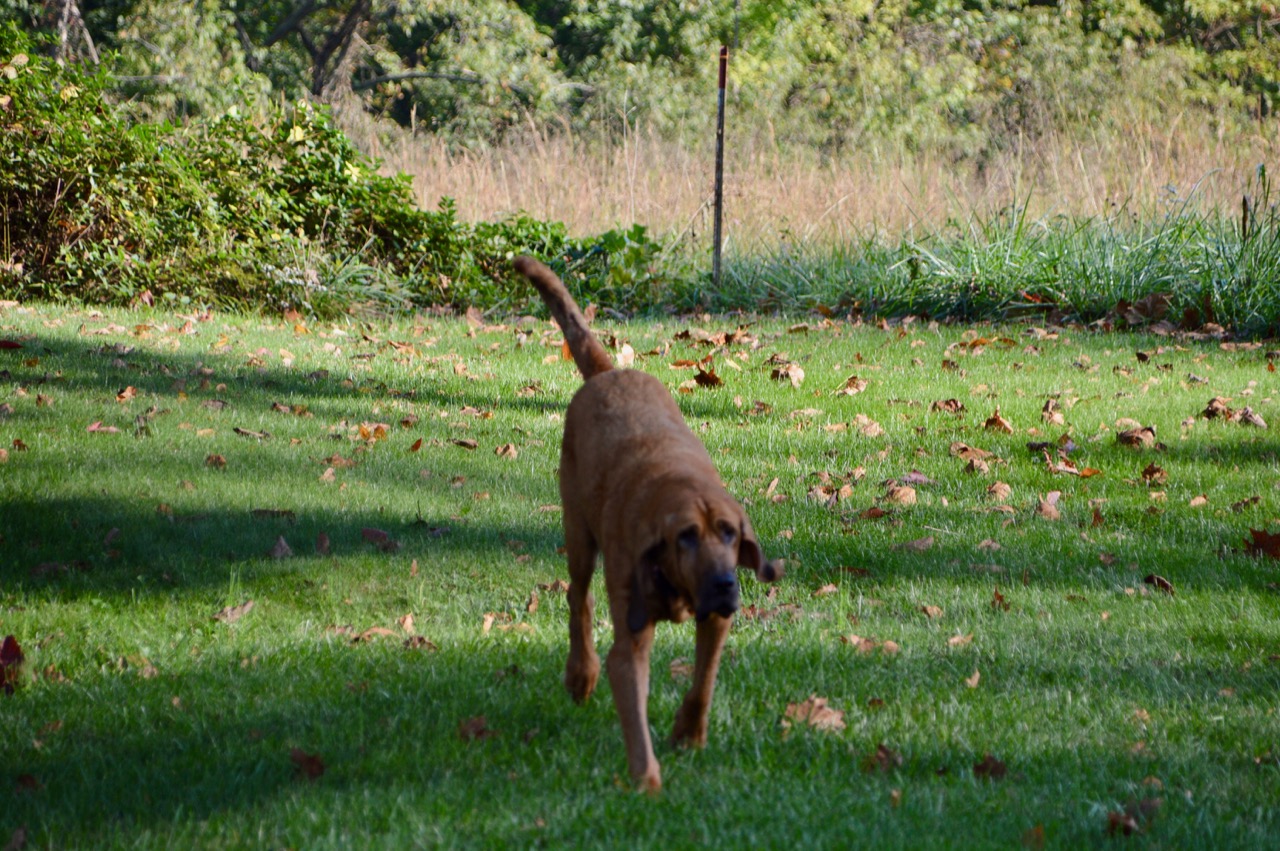 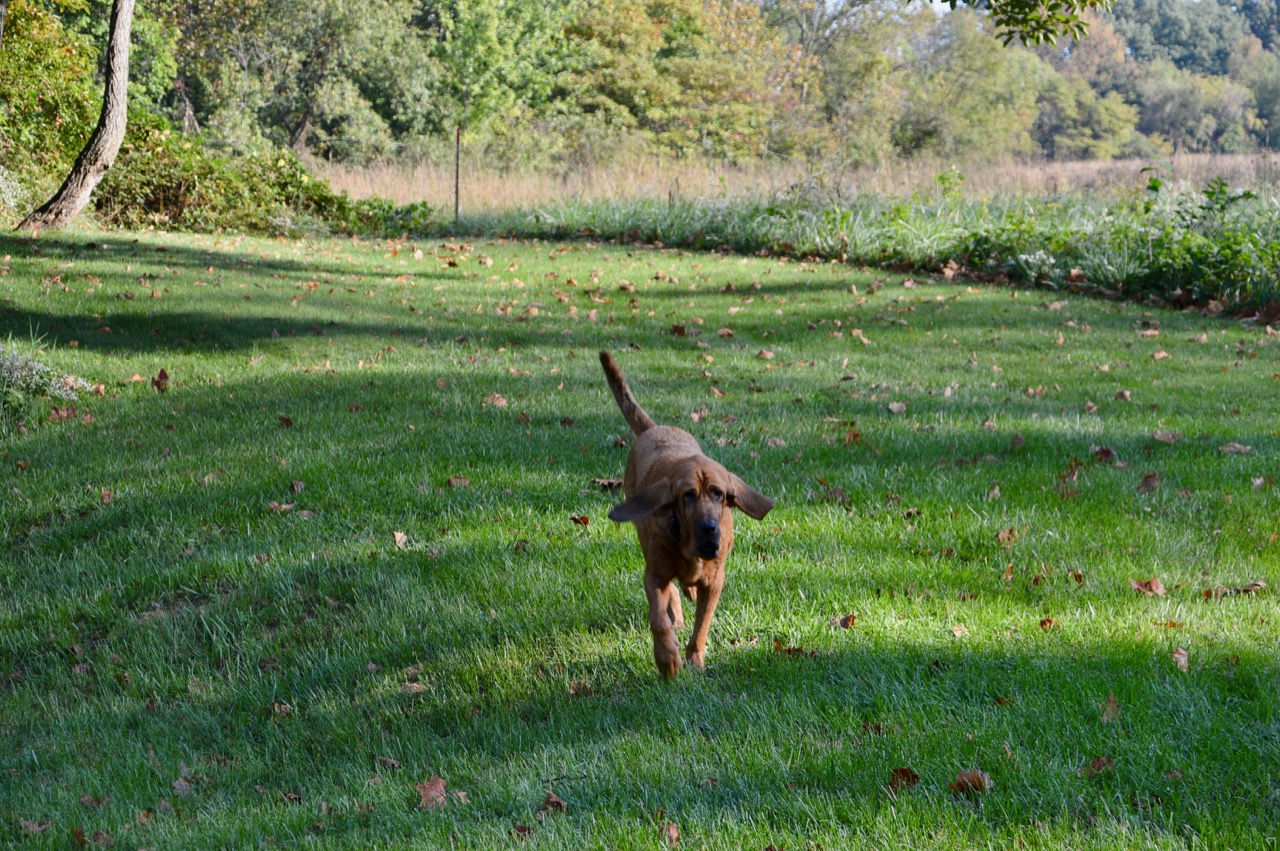 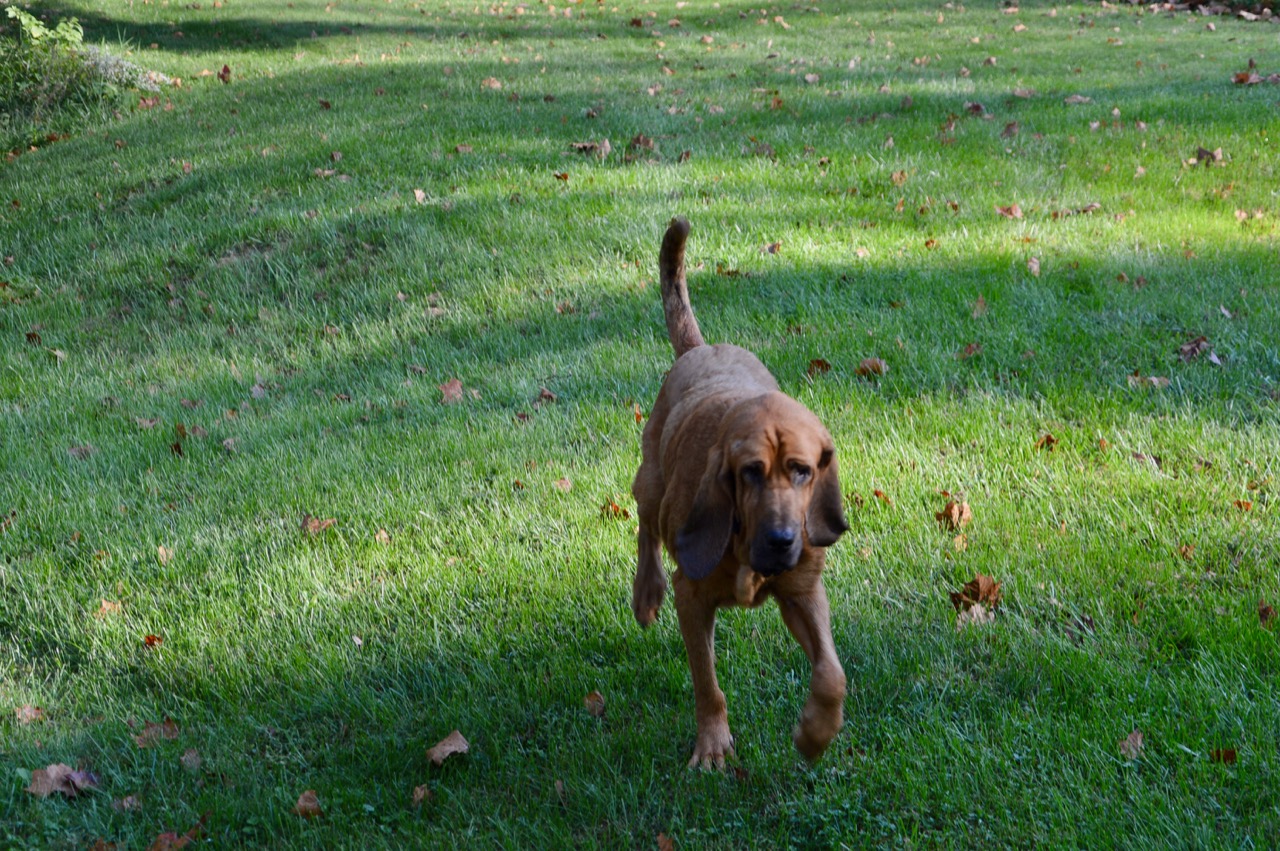 I spent some time researching cameras by looking at the CNET reviews, customer reviews on the Best Buy and Amazon websites. The NFL games were on the tv but more of background noise than having any interest. For some reason today I didn't feel like watching football.

Heidi spent all day on the couch, then on both blankets in different locations to sleep the day away. She is really looking good, acting different than before her tooth surgery of course and never letting me forget what time breakfast and lunch are.

It's was another great day in 'the tropics' of Southern Indiana today.
By Steve at 2:30 PM