The Hounds Make Me Take An Oath 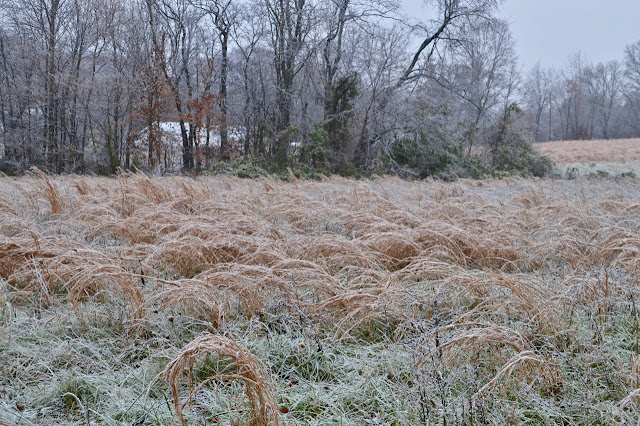 Waking up to another missed weather forecast, it was decided over breakfast kibble that the blog author and a slave to the hounds (me) would be forced to take an oath. So picture Steve (blog author and slave) standing at attention with his right hand raised and both hounds facing him. Repeating the words "I will never blog about future weather conditions and/or local tv weather forecasts again. I will not let the local tv weatherman lead me down the path of stupidity."

At the rate the snow plows were going back and forth last night in front of my house, prepping the highway for major snow and ice conditions, they might run out of their annual salt and sand allotment before the major snow storms happen later this winter. I could tell by the time I called it a day around 1am, that old computer the weatherman spoke of the other night needs some calibration if we are to believe the local forecast.

Of course that didn't stop Stella this morning. Since I will not let her walk into the Land of the Burrs, she has decided the next best thing is to stretch into that area as far as possible and she is safe from hearing me yelling "No" because her rear feet are still in the backyard. 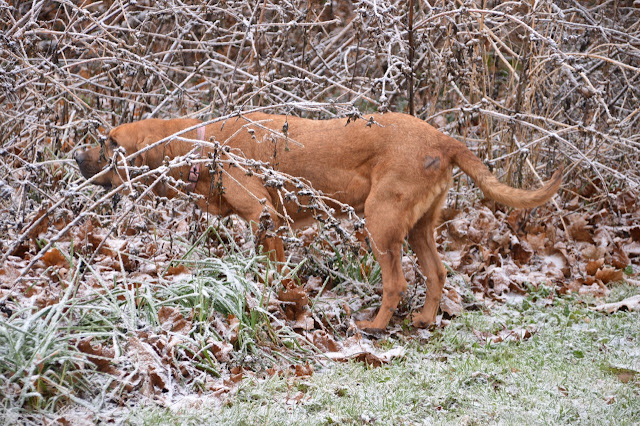 With just a small amount of sleet this morning we took off for a pleasant morning walk, just at the freezing level of 32°. I am glad I finished up the 2018 Leaf Project a few days ago. 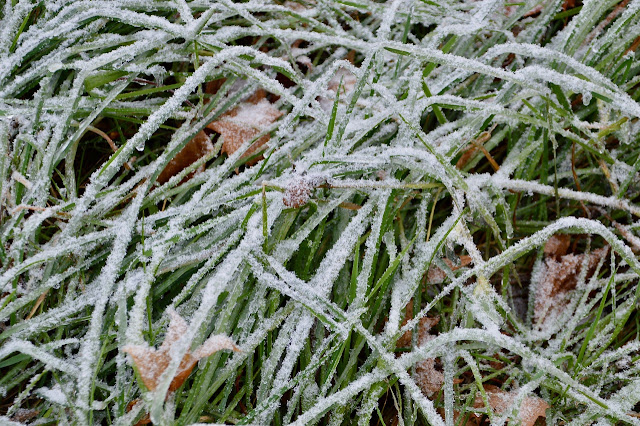 It took a while but Stella eventually got back to enjoying these walks, even demanding them now twice a day by walking to where I might be in the house and whining a little bit. She must be a morning hound because she likes both of her meals and both of her walks wrapped up no later than 1:30pm. 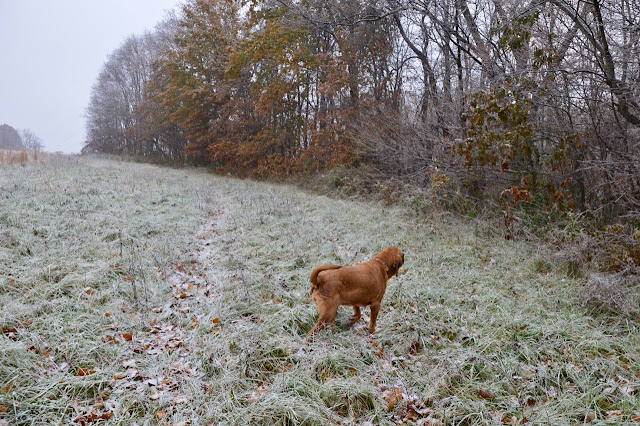 Just the weight of a little ice made most of the dead wild flowers tip over, facing west. 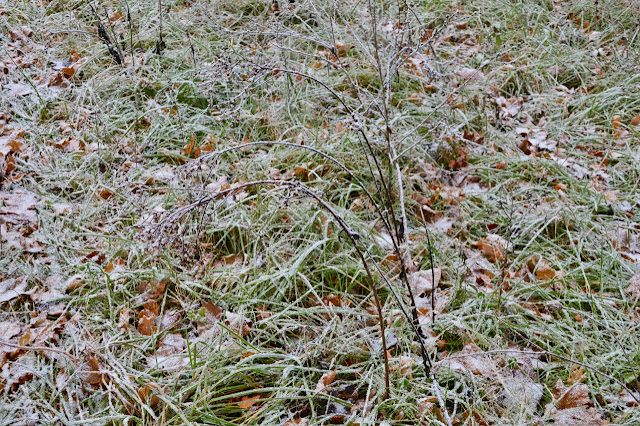 With the light white cover, it was easy to see all of the deer tracks. To me it looks like they are traveling in a small group. It's been over a year since I last saw any deer in the field while we are taking our walk. Where two years ago Sadie and Stella would be on a full speed sprint chasing them, last year's sighting they did not even lift their heads from the ground. They missed seeing them. 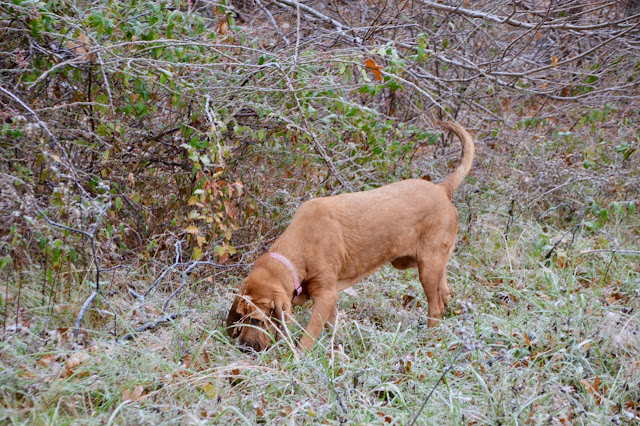 From the looks of it, the winds were coming from the north last night while it was sleeting. 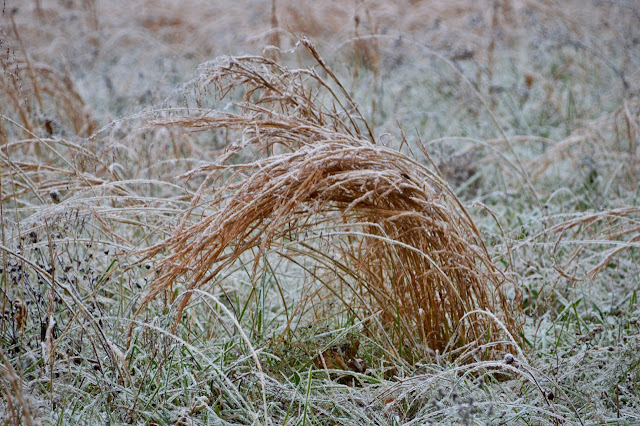 While I followed the path ... Stella though she would follow those fresh deer tracks. 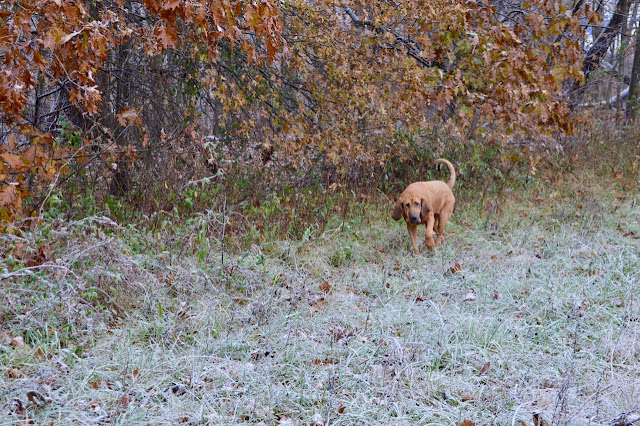 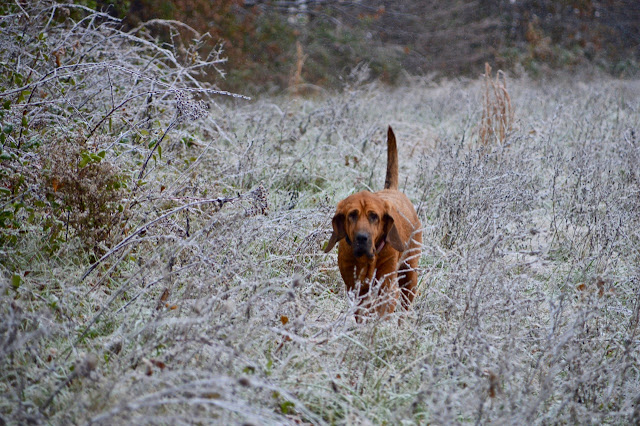 Stella has completed her 3rd bottle of Cosequin, that has 600mg of Glucosamine Hydrochloride from shellfish. It also contains MSM and I believe has helped her hips and joints to the point she runs a little bit but nothing like two or three years ago when she sprinted in this field either running from Sadie or chasing her.

I am going to change her next order and instead of buying it locally I am buying from Chewy.com something called VetriScience GlychoFlex Plus boosting that 600mg to a 1000mg and higher dosages on all the ingredients that are in both brand names. I did not request Next Day shipping but FedEx just delivered a few minutes ago. 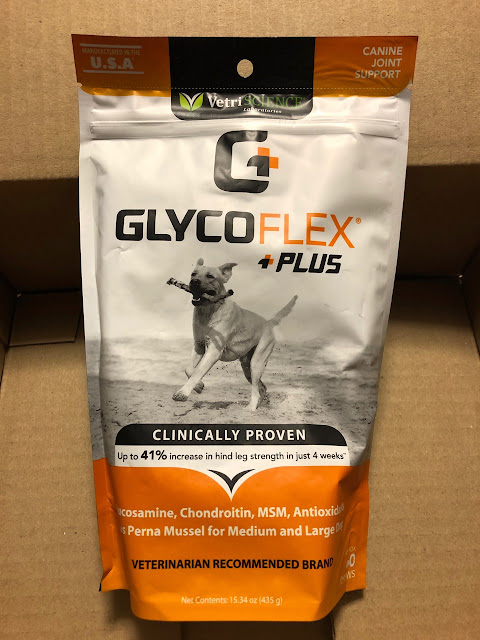 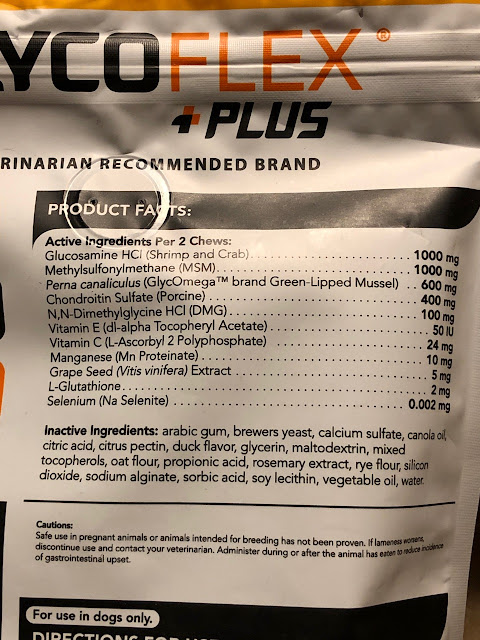 She has improved though with the Cosequin these past few months. 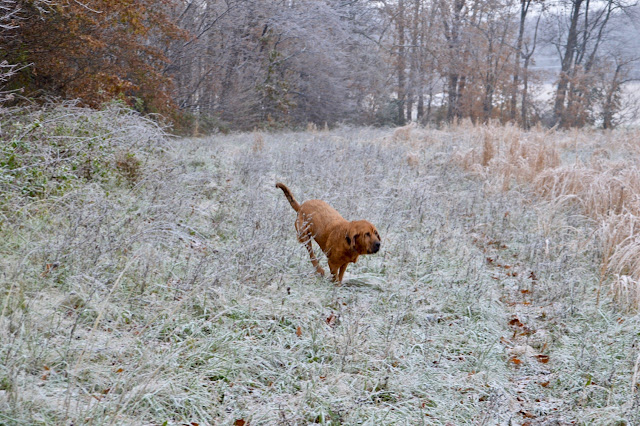 If it wasn't for that black part on her tail or her grayless snout, she looks almost like Sadie in this photo. 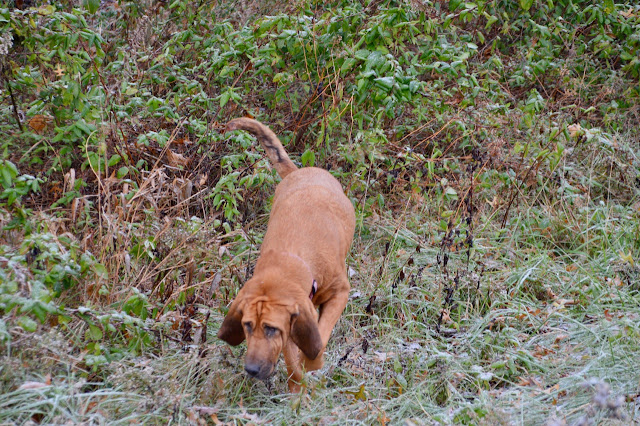 What might those footprints be, on my path and with Stella BEHIND me ... deer tracks. Throughout the walk you could see where they followed a lot of the path I walk on. 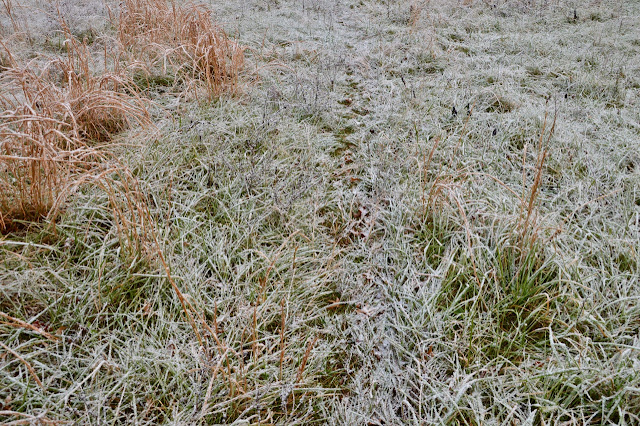 I had to be quick with that photo because Stella came charging up behind me to check out those exact same prints. 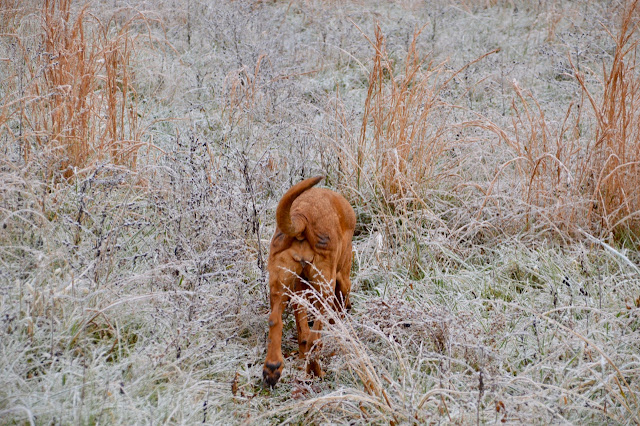 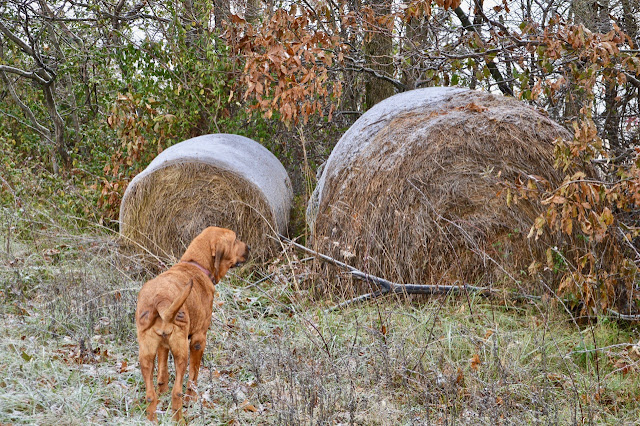 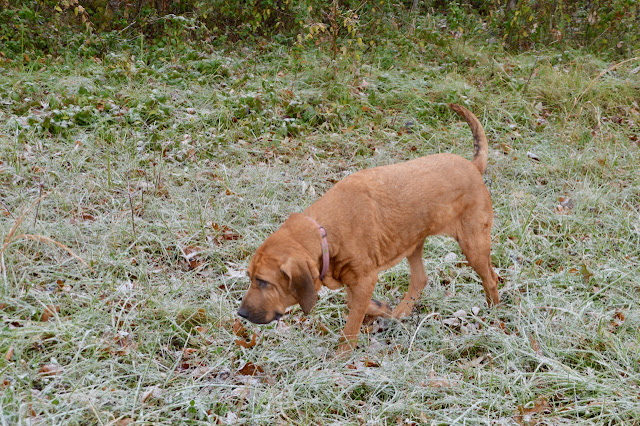 A light frozen rain while we walked this morning and with the temperature so close to freezing +/- a degree or two, it is raining off and on most of the day. Those building you see there are only two of the four back there. They produce such a high number of turkeys in those four buildings that I am still not sure if I heard the number correctly from the owner a couple of years ago. 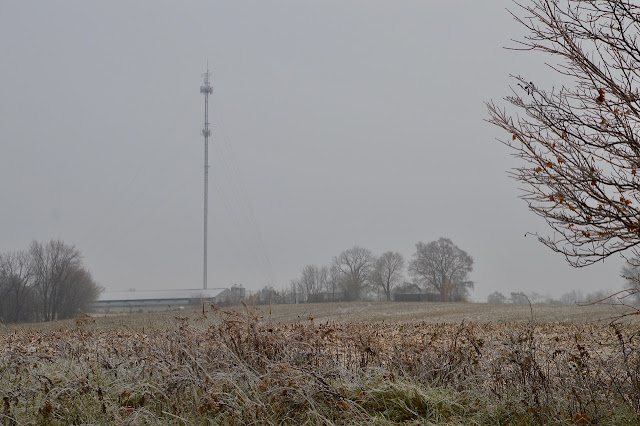 More of the deer prints, which were much more obvious to the human eye than they were to my camera. 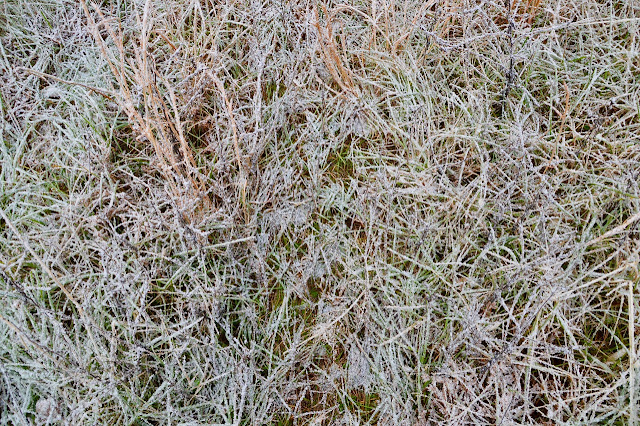 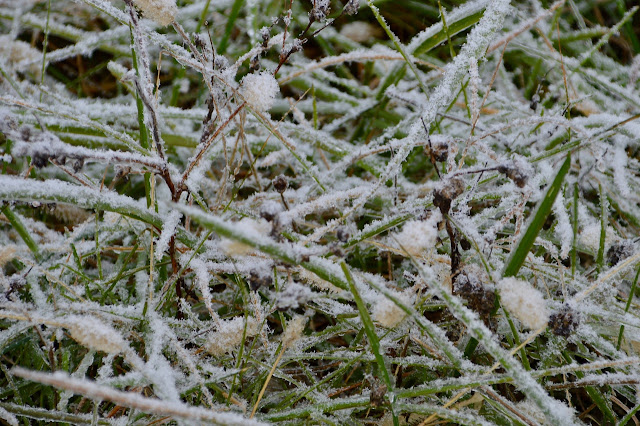 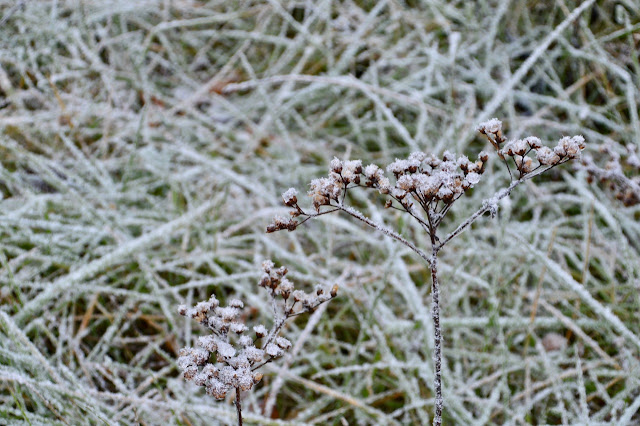 At first I thought that Stella was cold and had decided to leave me. Then she made an immediate left turn because her nose caught a whiff of something.  I was able to take the old return path home. 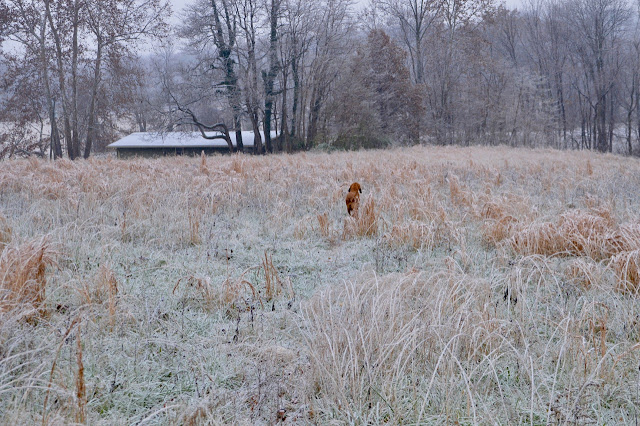 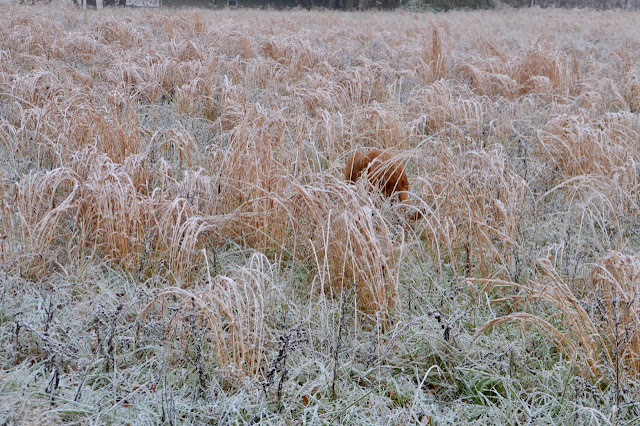 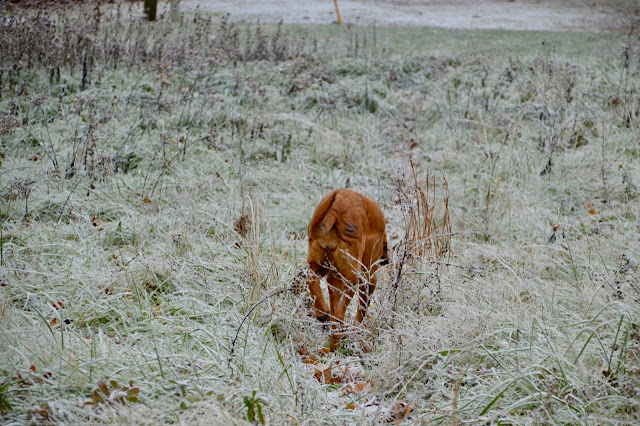 She made one last try to convince me that I should let her wander out among the ragweed burrs and find out what that dead smell was. That wasn't going to happen. She gave up and headed for the door. 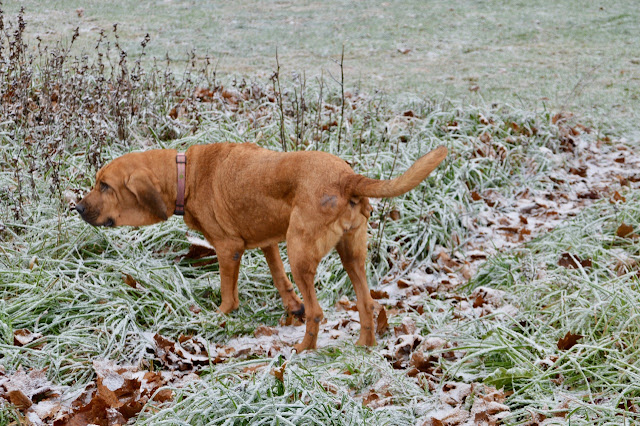 Don't mistake these for "footprints in the sand" ... we may live in 'the tropics' but that doesn't mean we live near a beach.  LOL

It was a very productive day today, inside that is. Dishes done, Laundry done, Heidi's blankets washed, and many pages of two books read. We are still maintaining indoor temperature between 64° - 66°. When I woke up this morning the house was too hot. I still prefer a cooler house, even below these temps. 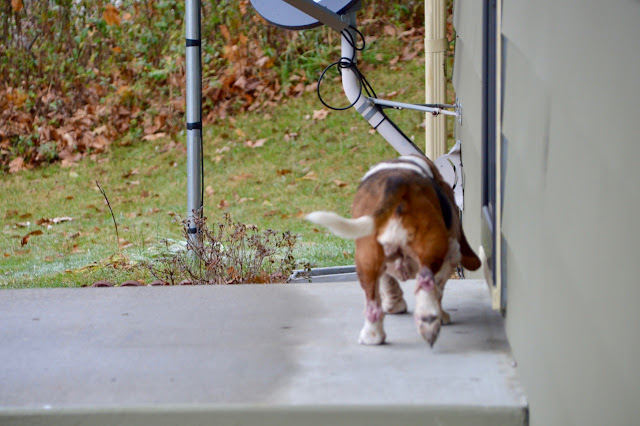 It was a good day in 'the tropics' of Southern Indiana today.
By Steve at 1:48 PM