The Week Flies By For The Hounds 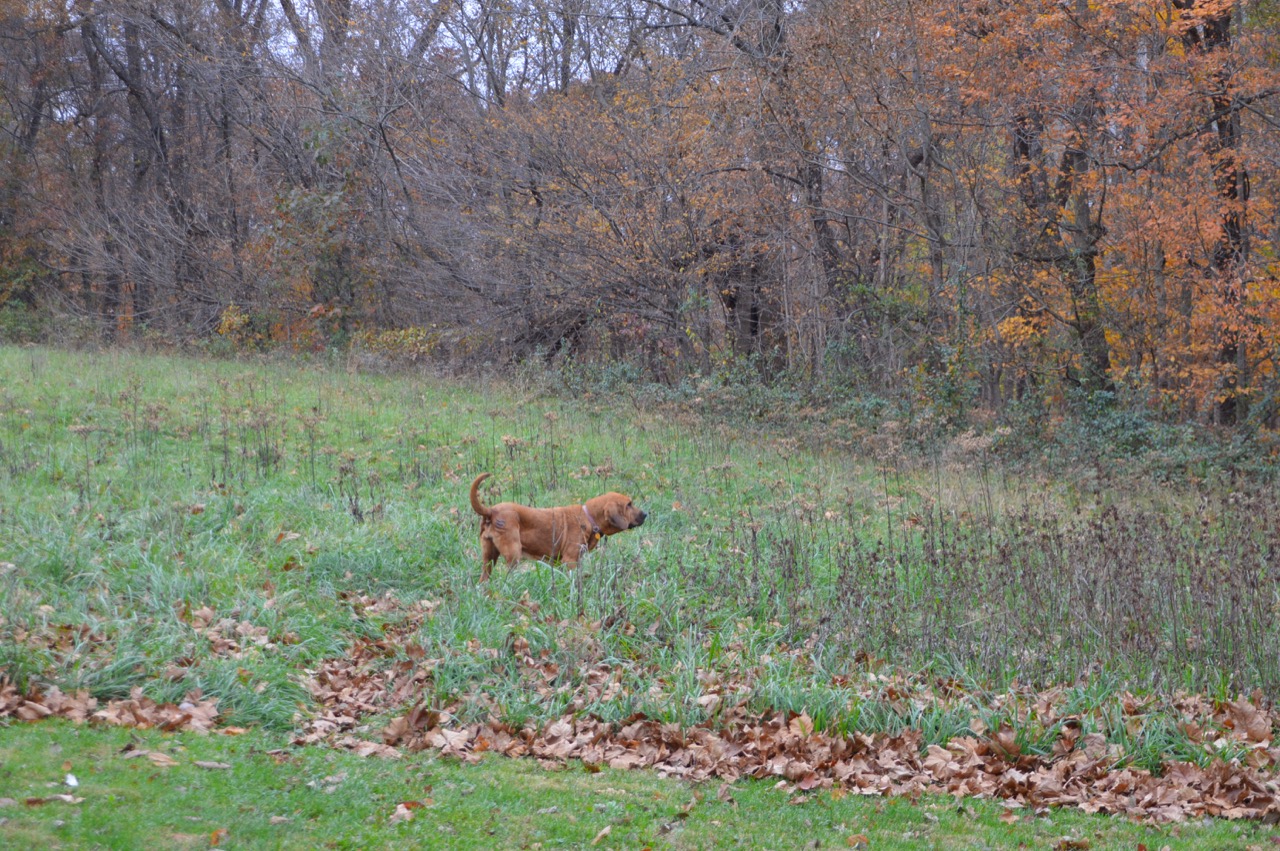 I am anxious to see these photos today because I did something different than I usually do. Before the walk I read an article my Feedly account about digital photography. The writer was talking about better quality of photos with a standard lens such as a 35mm or the 55mm instead of a zoom lens. So I tried taking most of these photos today with a 55mm setting on my zoom lens, a few at 35mm and some at 70mm ... so I could also find out if I can survive on a hound walk with a zoom lens that has a range of 35mm-70mm or will a single 55mm lens work okay?

As you see my glove below, Stella was out in the burrs before I could step into the backyard. Before we took another step I pulled all of the burrs off of her only to find them attached to my glove afterward. 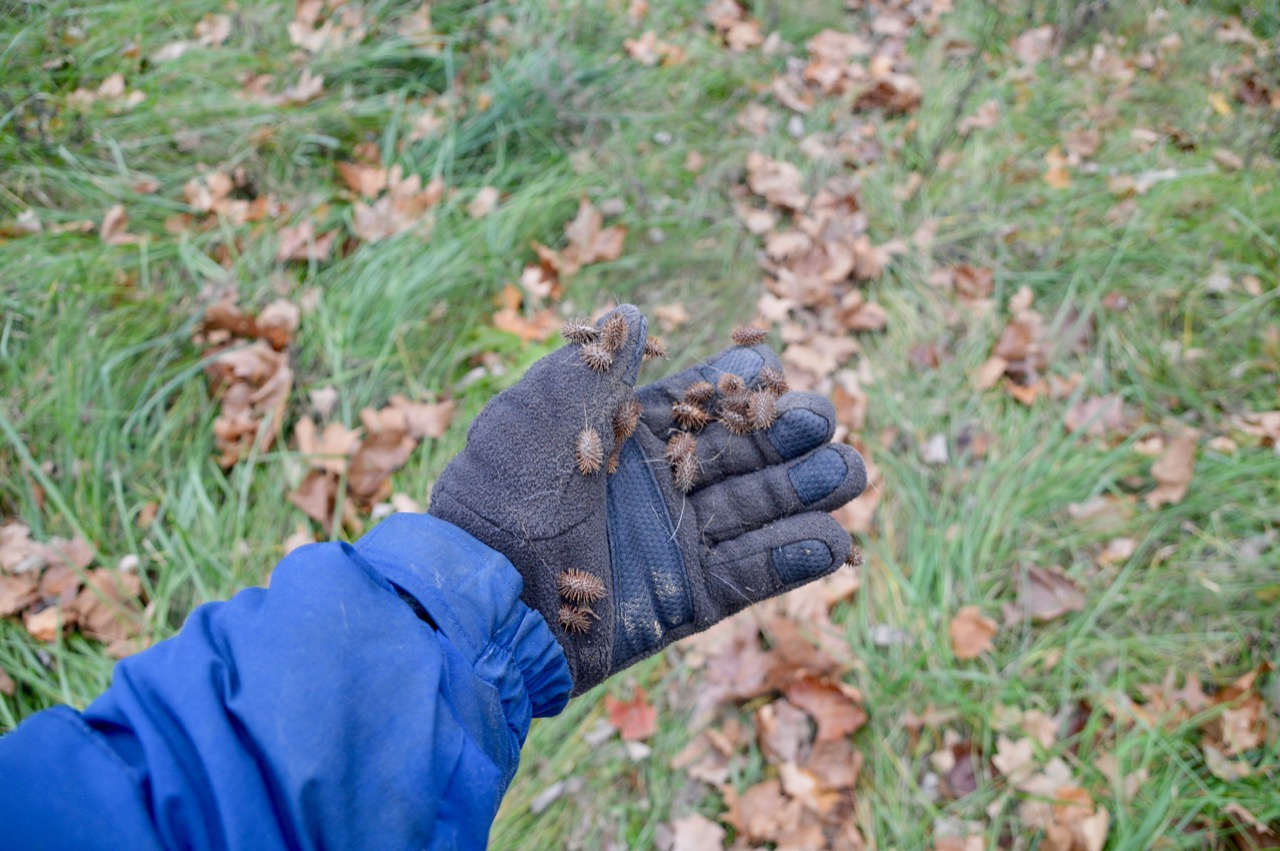 She was happy with all of the burrs off her neck, sides and a few on the side of her face. She started with a nice fast run just long enough to run in front of me and then walk as slow as a crawl or about a half step short of my normal stride. 7 acres to walk and she has to walk directly in front of me slow enough that I have to stutter step. If I stopped she stopped. 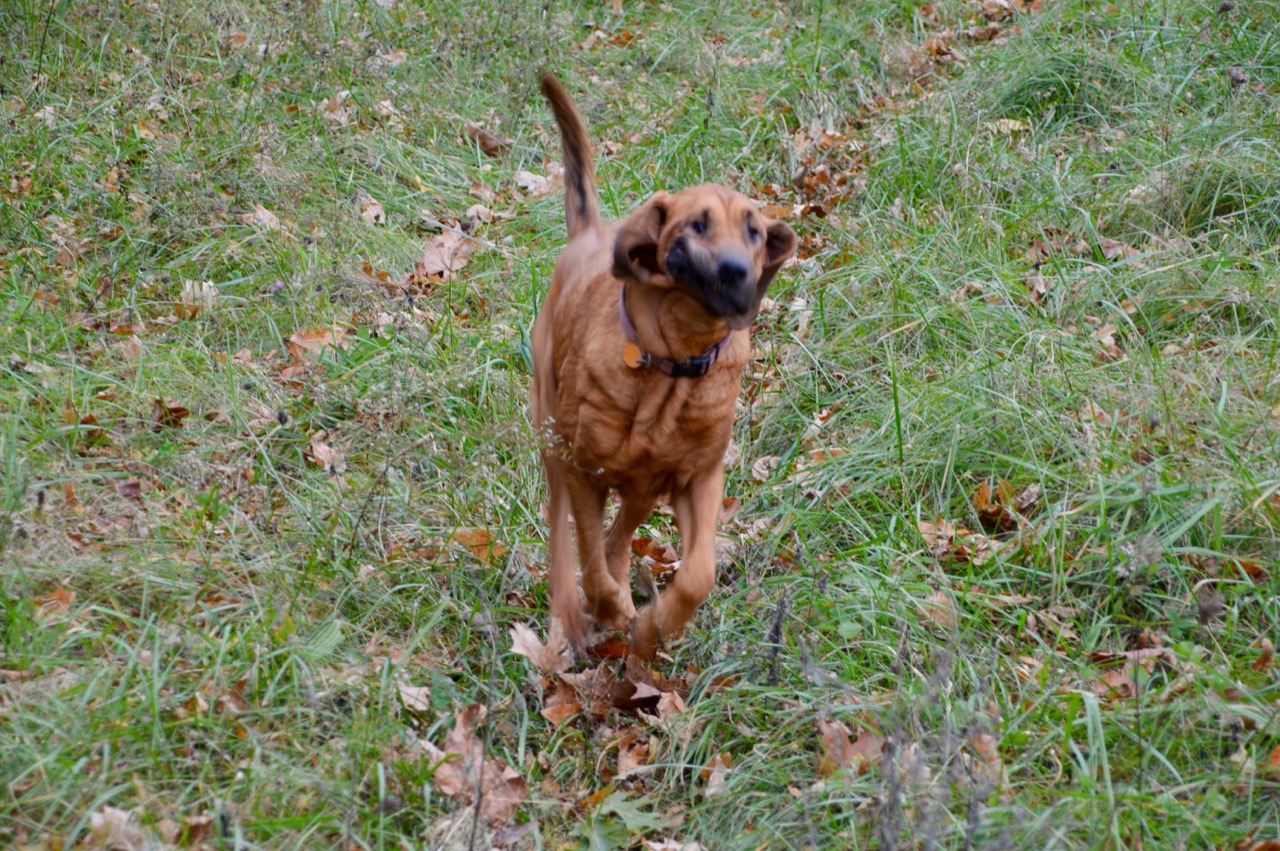 I added a little color saturation to the fall leaves that are left. I like that option, otherwise it was be a blog full of drab, dull and dying colors. 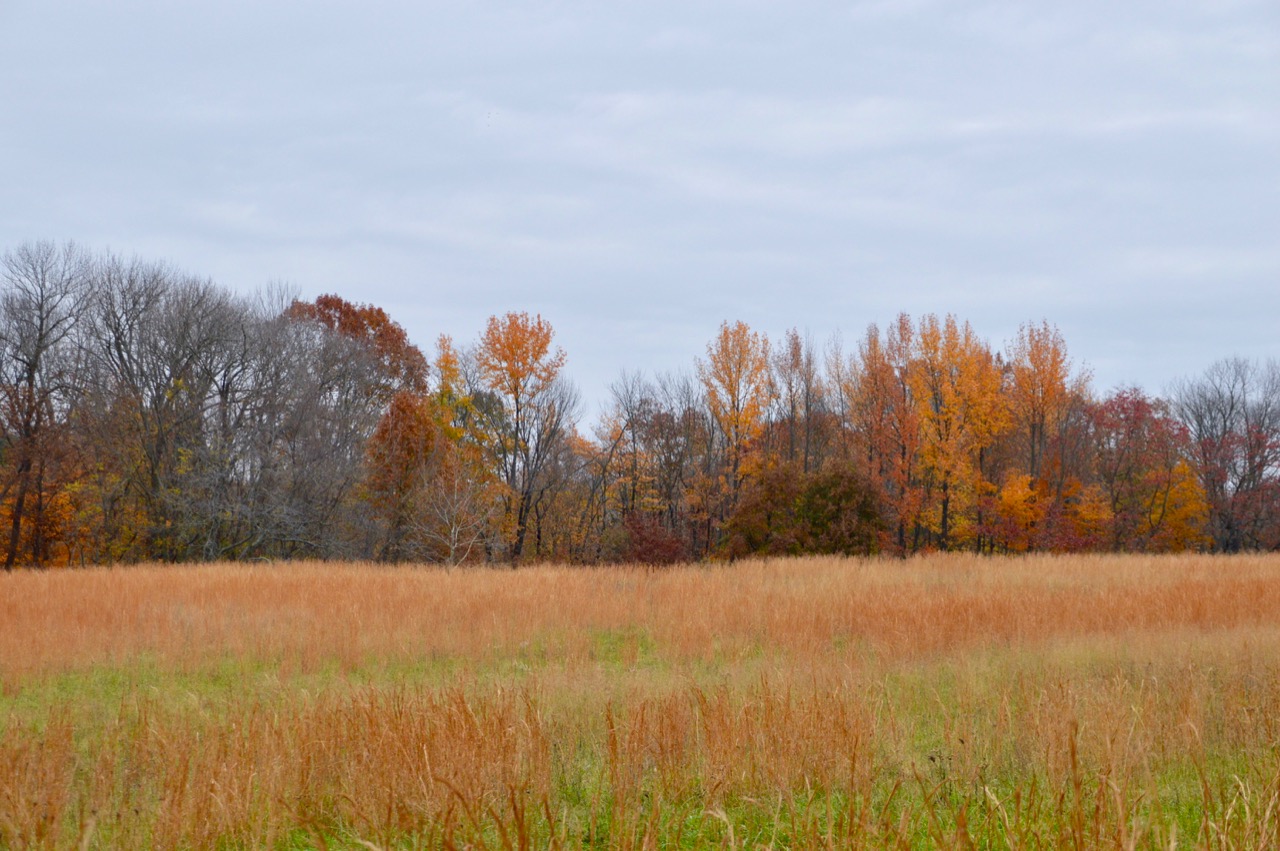 Most of these are being taken with the 55mm setting. I am surprised that I may not need anything more than 70mm. I guess now that I think about it, Sadie was the one usually running way ahead or leading the chase after deer where a 200mm came in handy. Yes, I still think about her every single day. 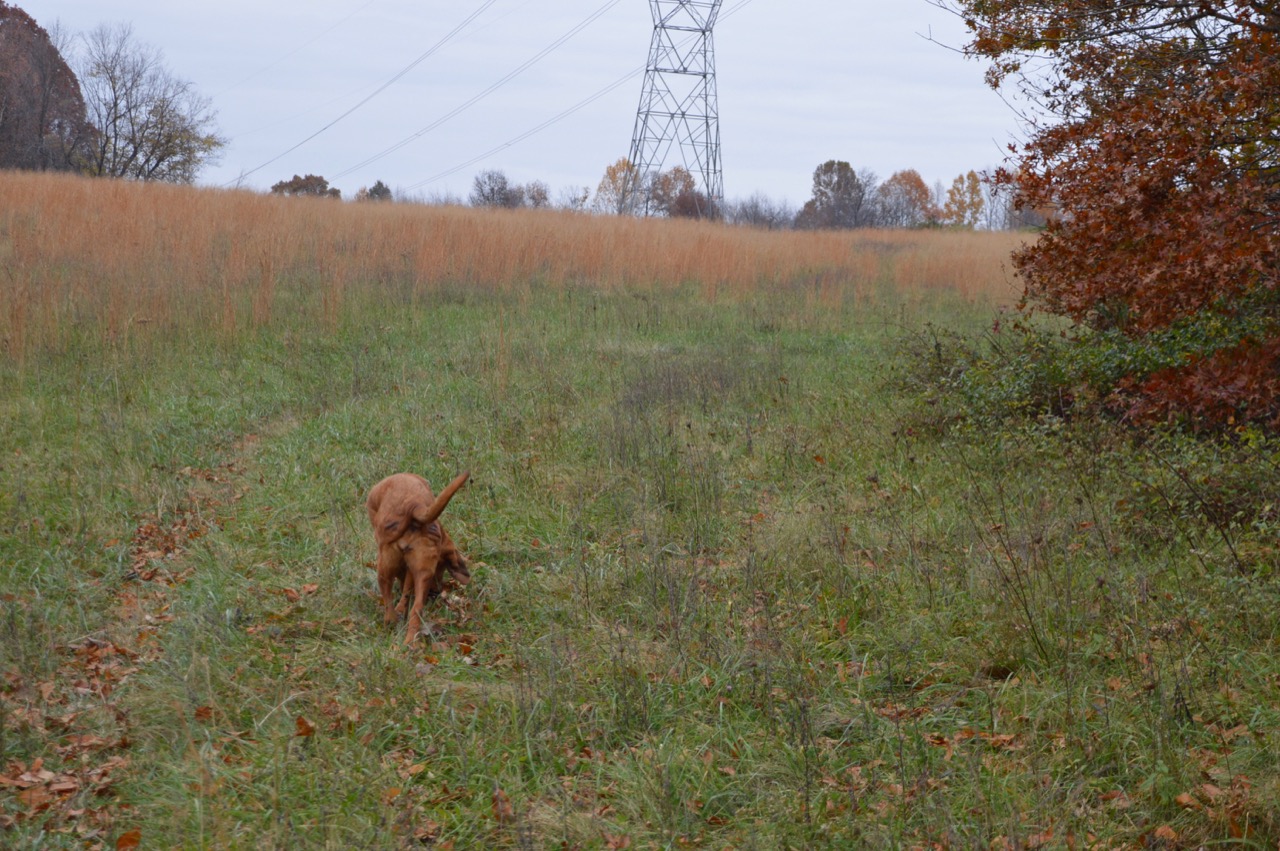 It felt colder than the temperature showed. This was the first morning where the cold air could "cut through you like a knife" ... the wind, nothing else, just so I am political correct. 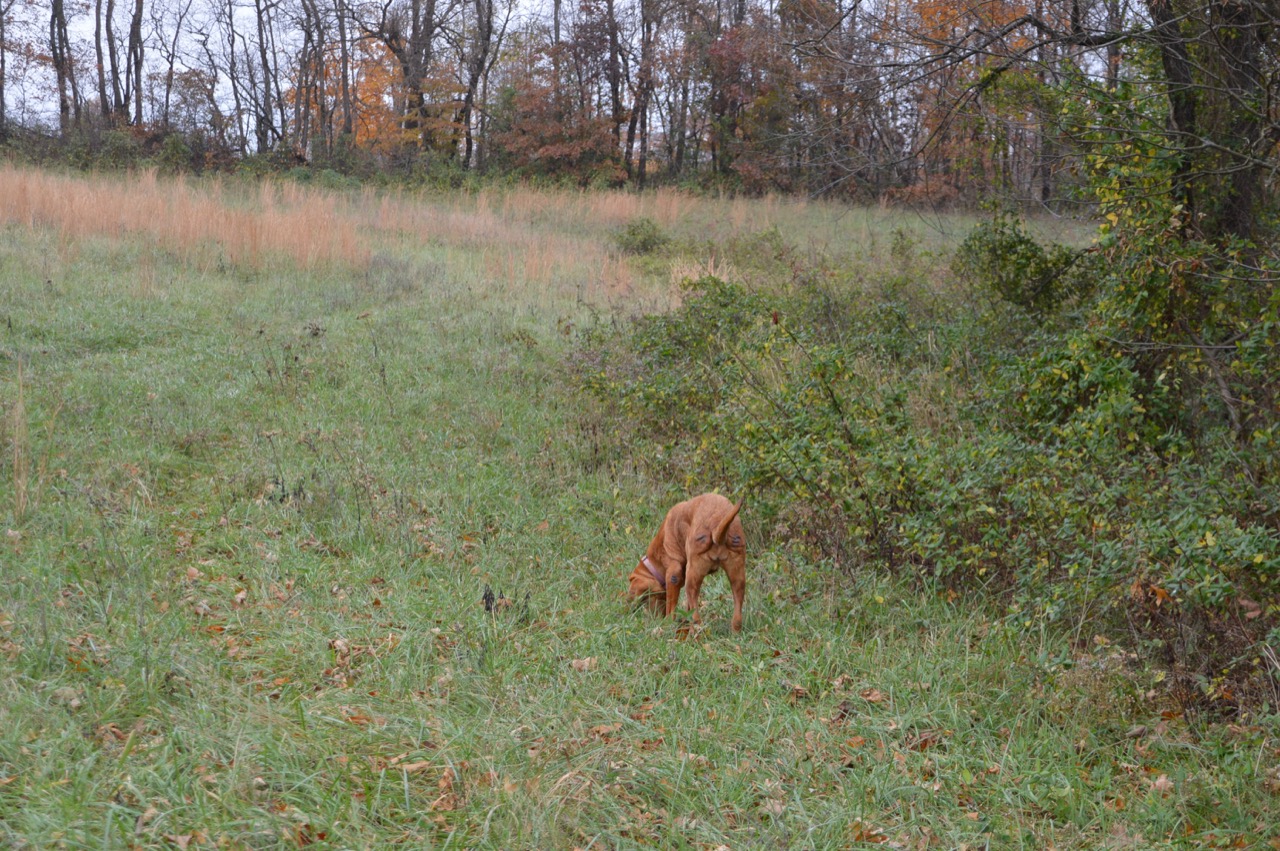 Not a bird, not a cardinal, just a bright red wilted leaf still left at the edge of the wooded area. 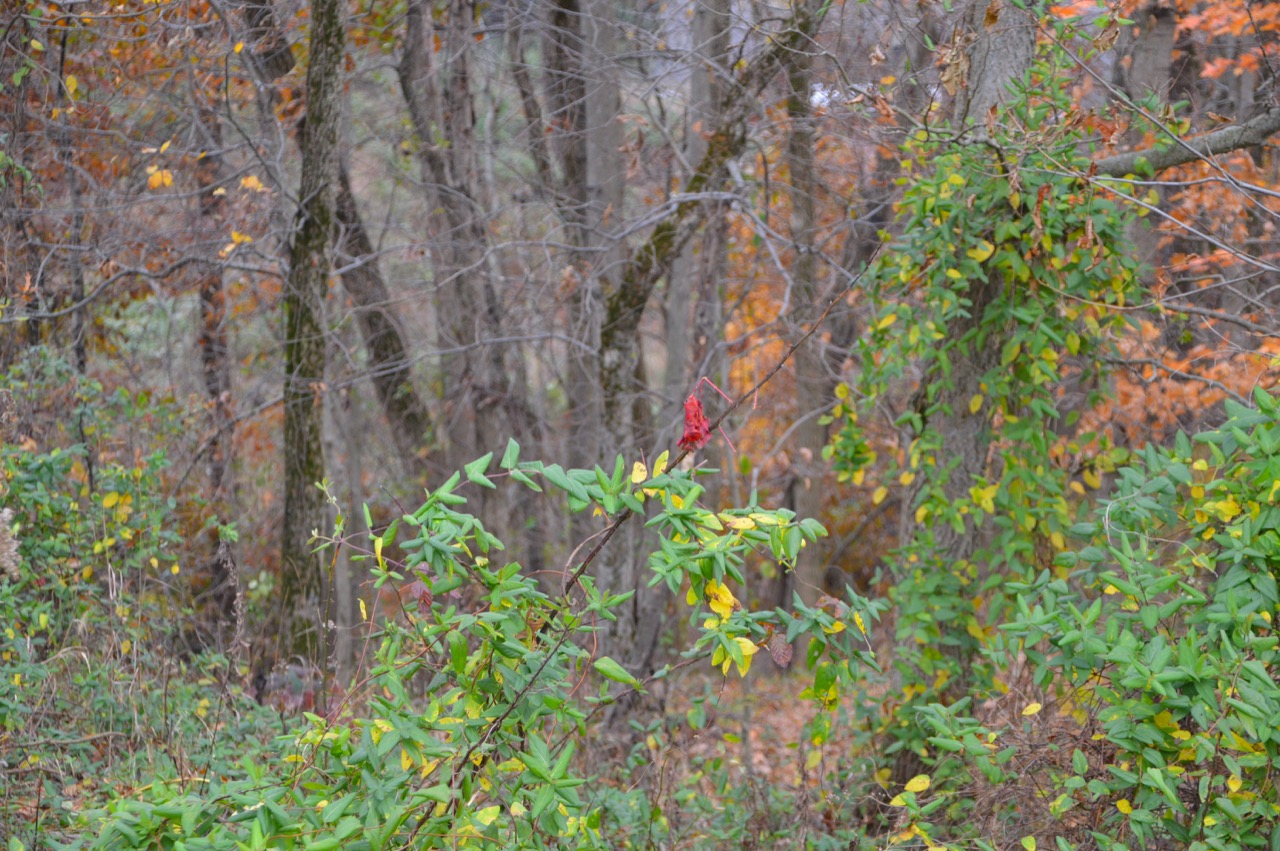 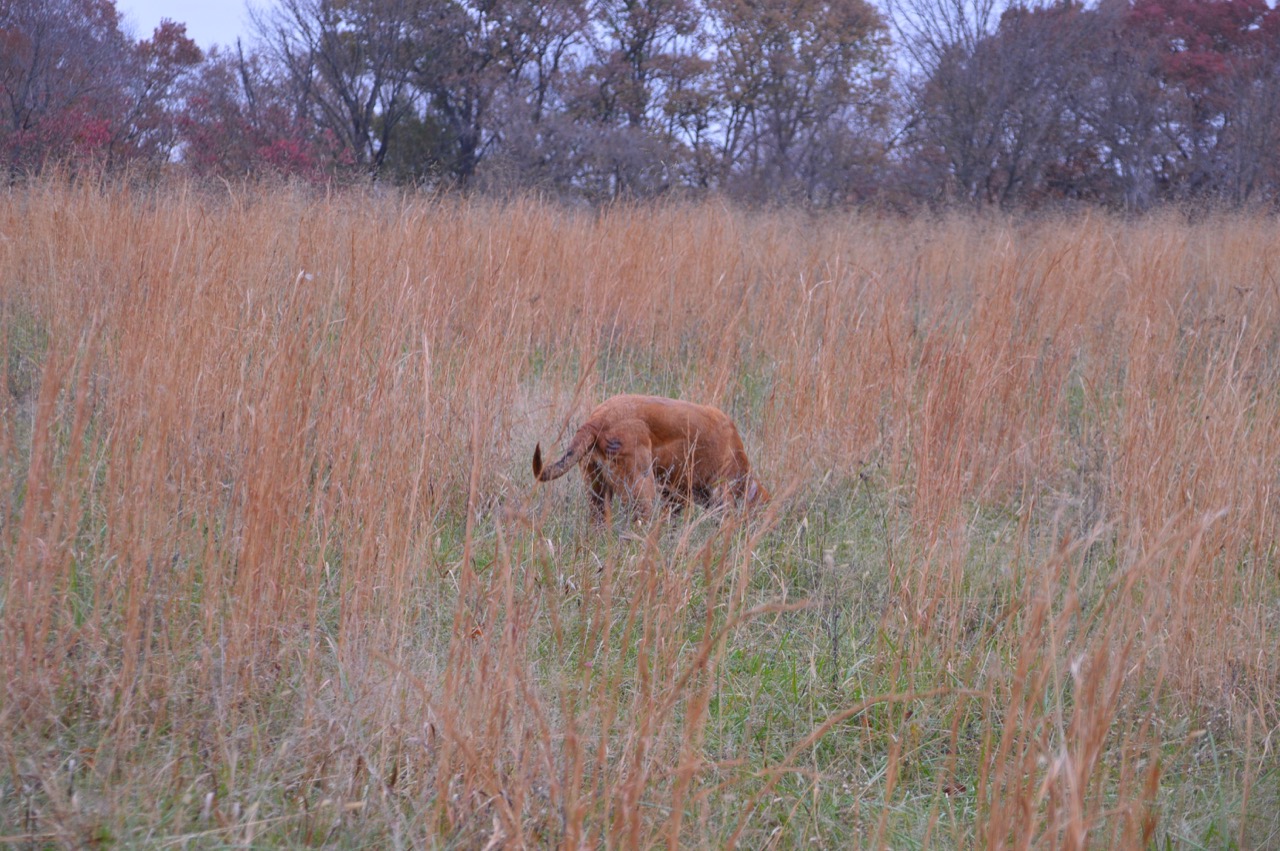 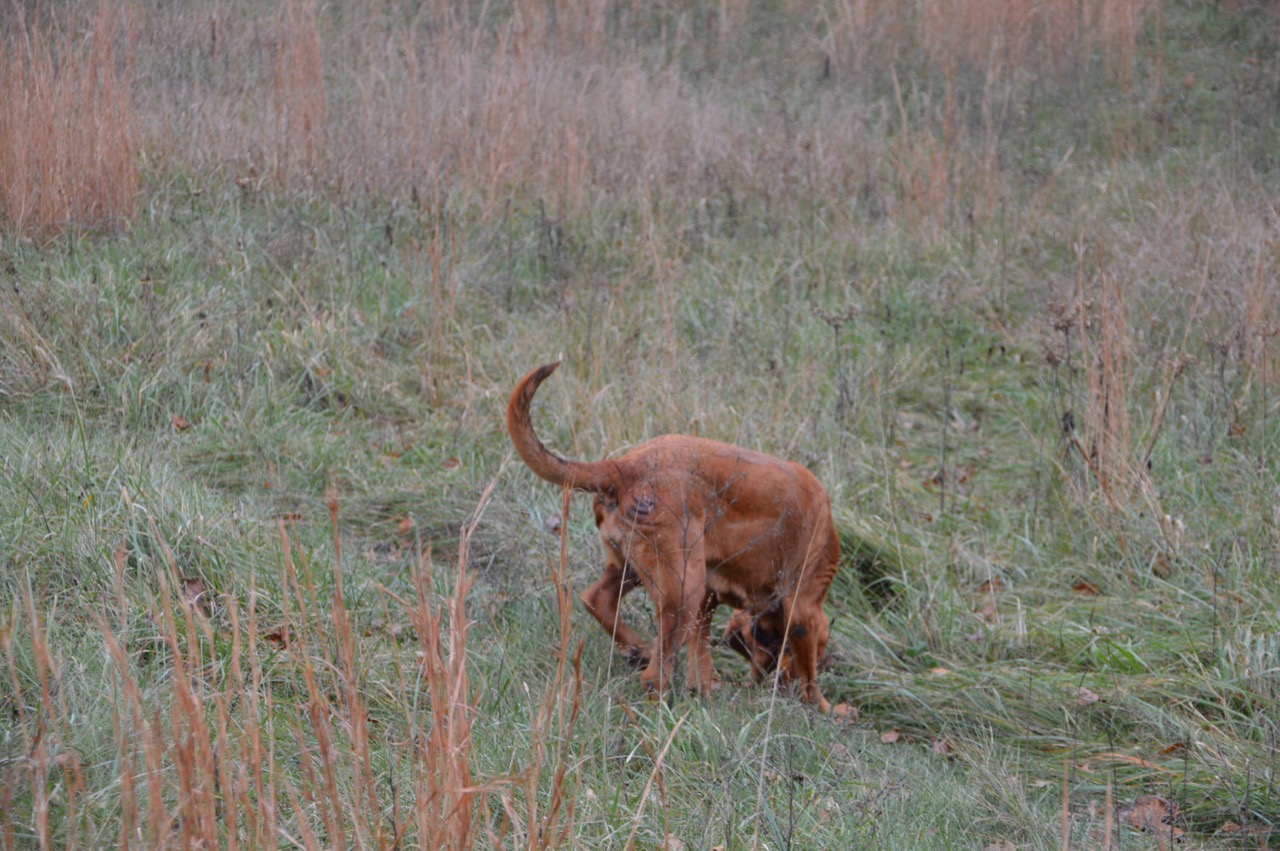 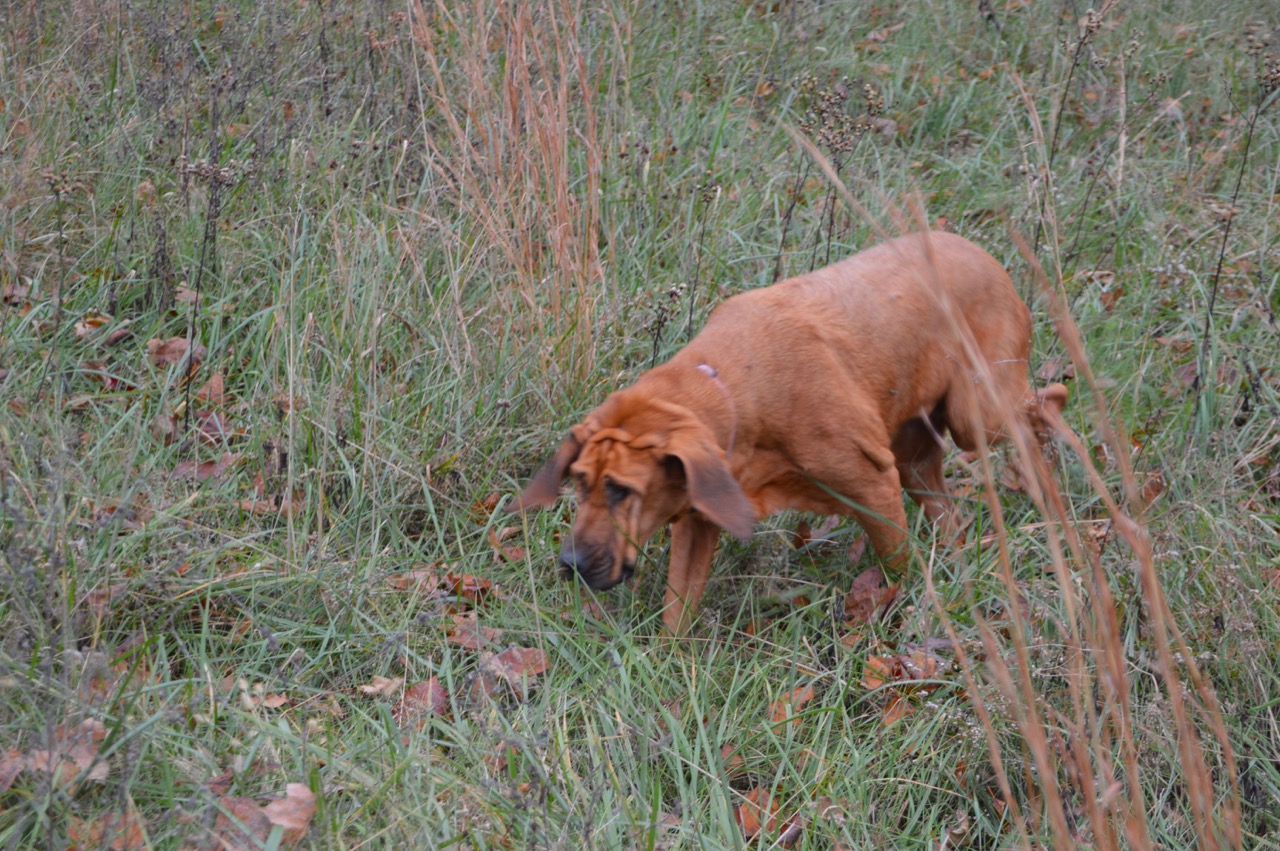 By the way the photos look you may think my memory is shot but I took this first one at 35mm. 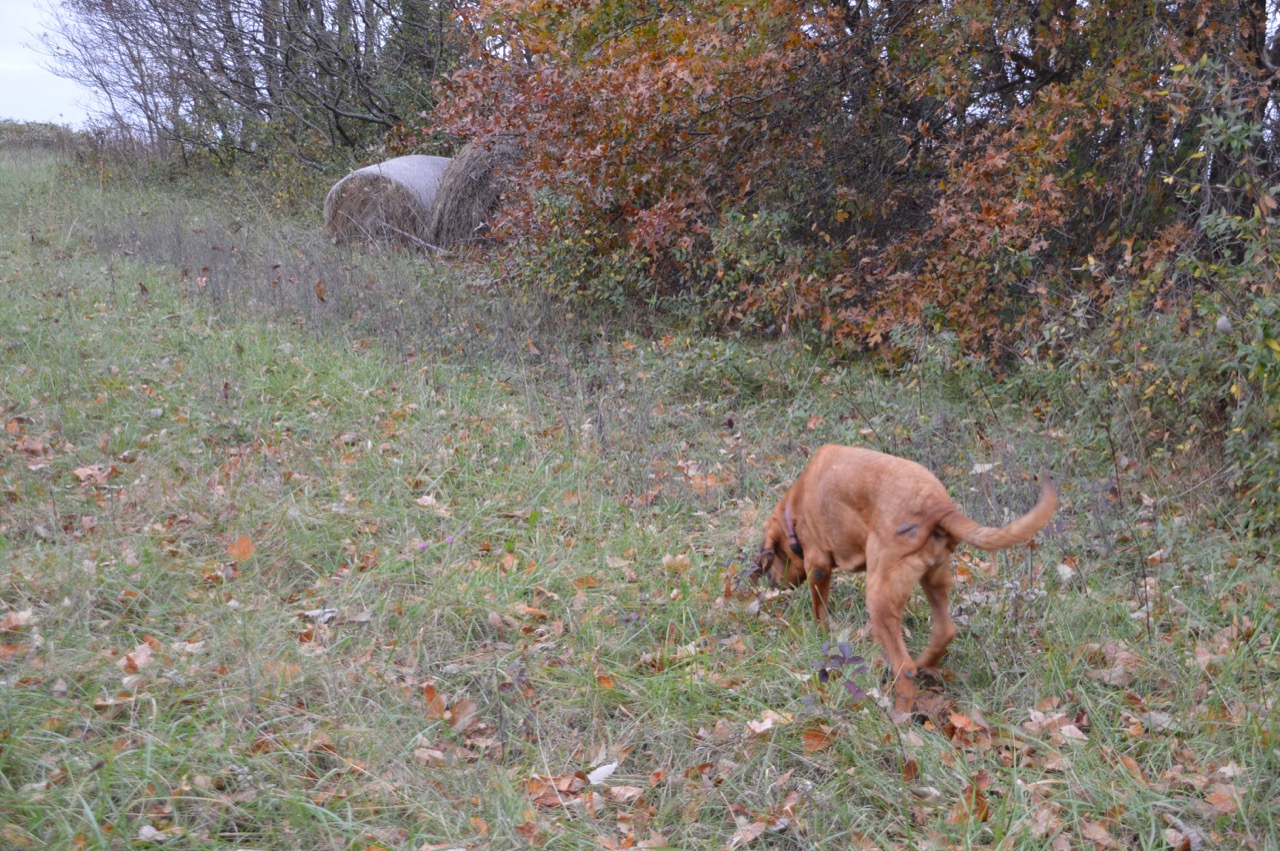 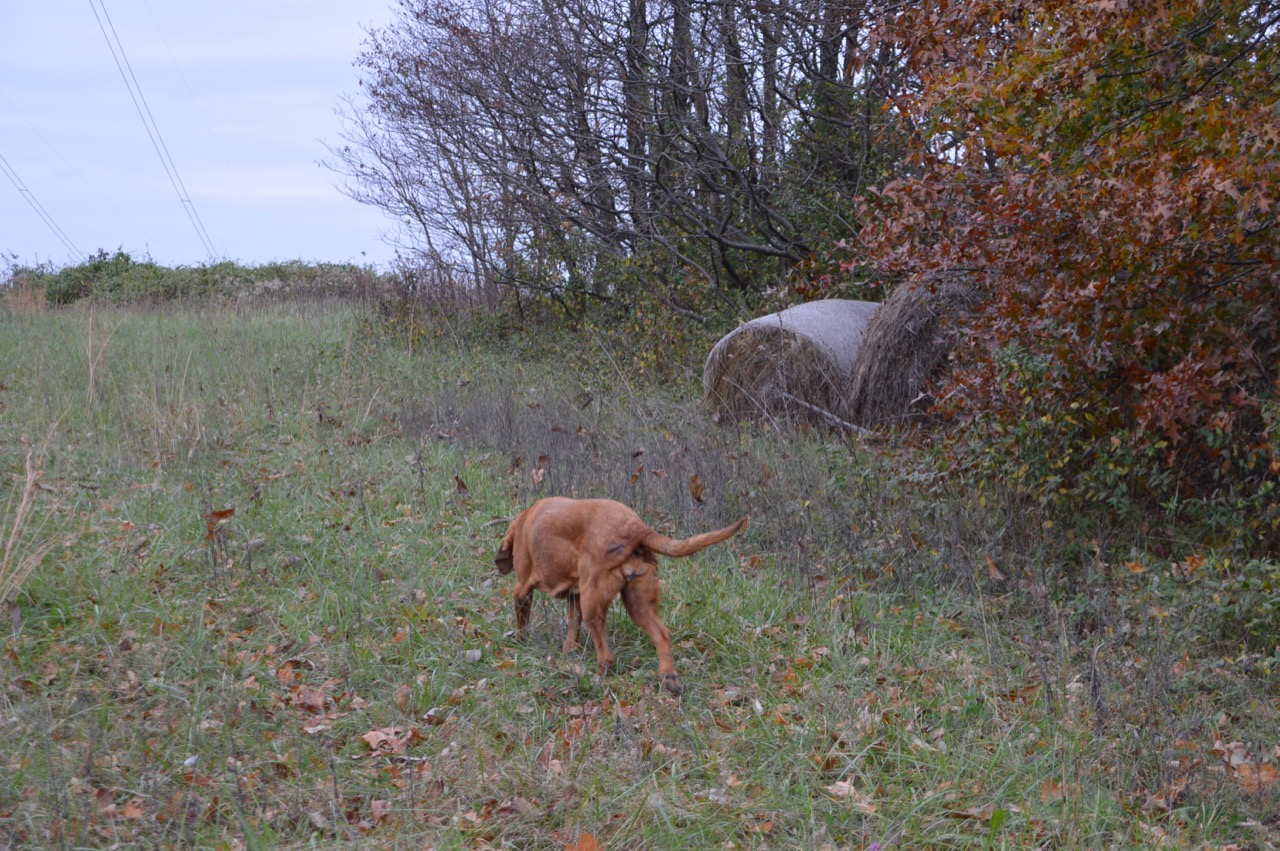 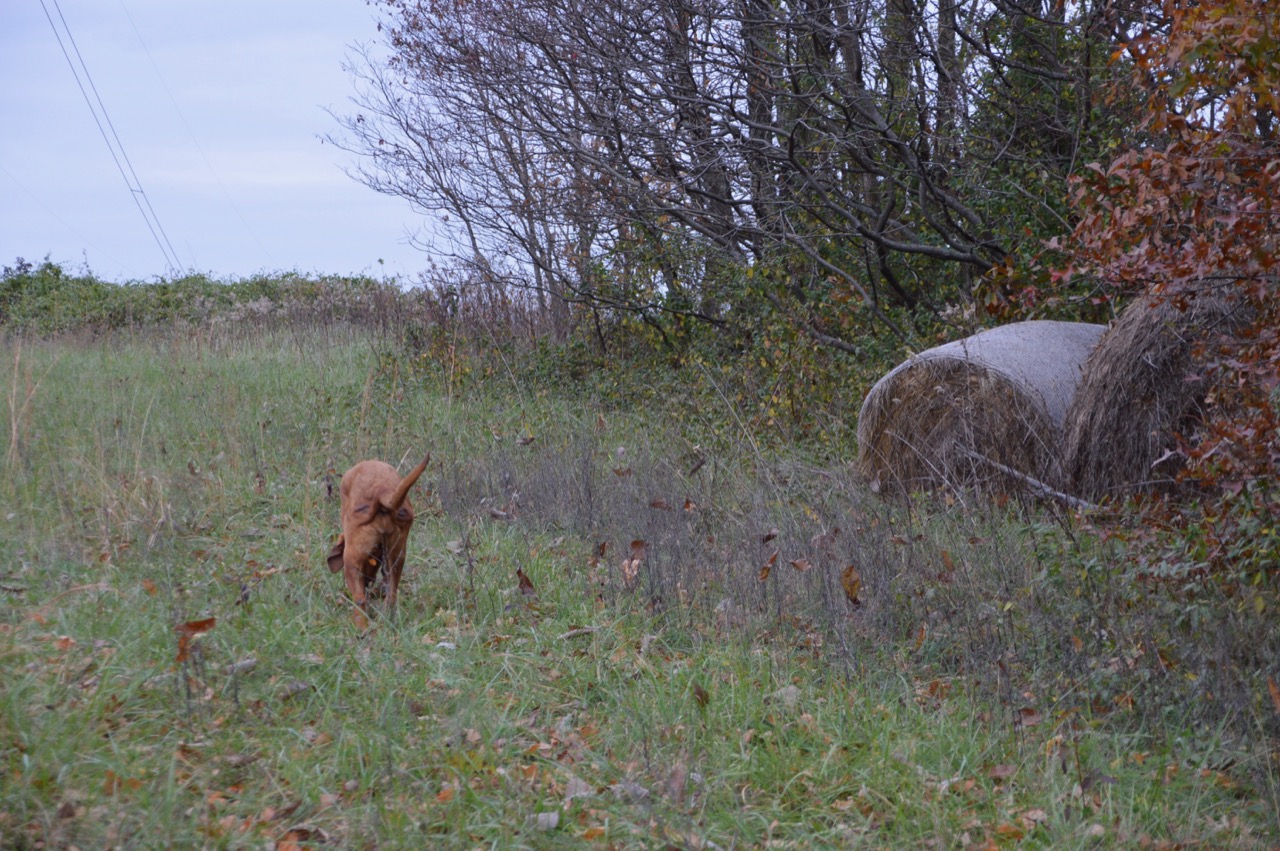 I had some shopping plans for today. I needed to finally replace my wool ski cap that was 29 years old ... yes honestly it was that old. 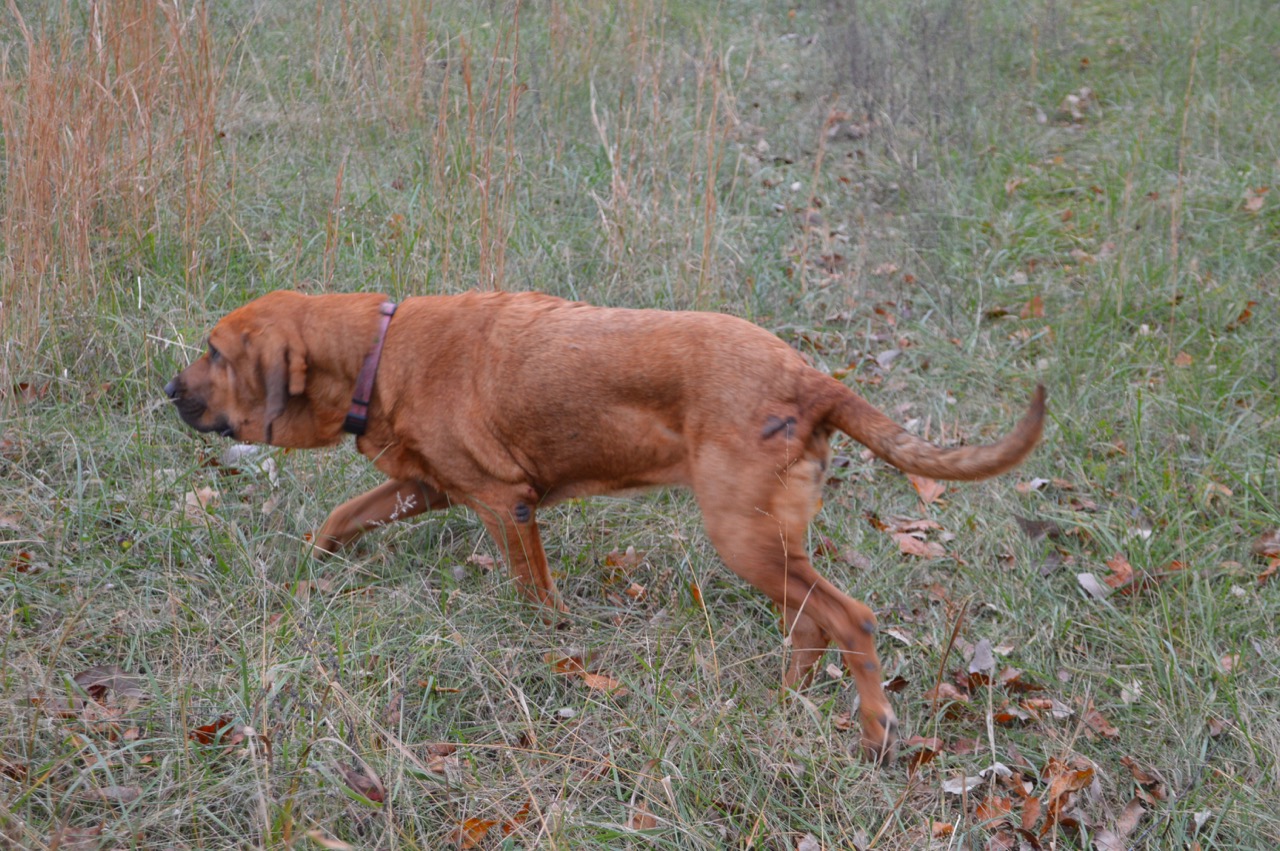 I also needed some new wool socks. Not only do they keep my feet warm on the winter walks but warm inside the house with the indoor temp 64° or lower. Nothing worse to me than a house that has the heater set to high.

I also wanted to check on a 4-Port USB Hub. I am out of ports on the back of my iMac since I added an external drive for the photos, an external CD/DVD drive that will be connected full time. I need a port for my phone cable to download the photos to my hard drive, recharge the phone and backup the phone hard drive to my iMac. I won't and never will do that over the cloud or by wifi. 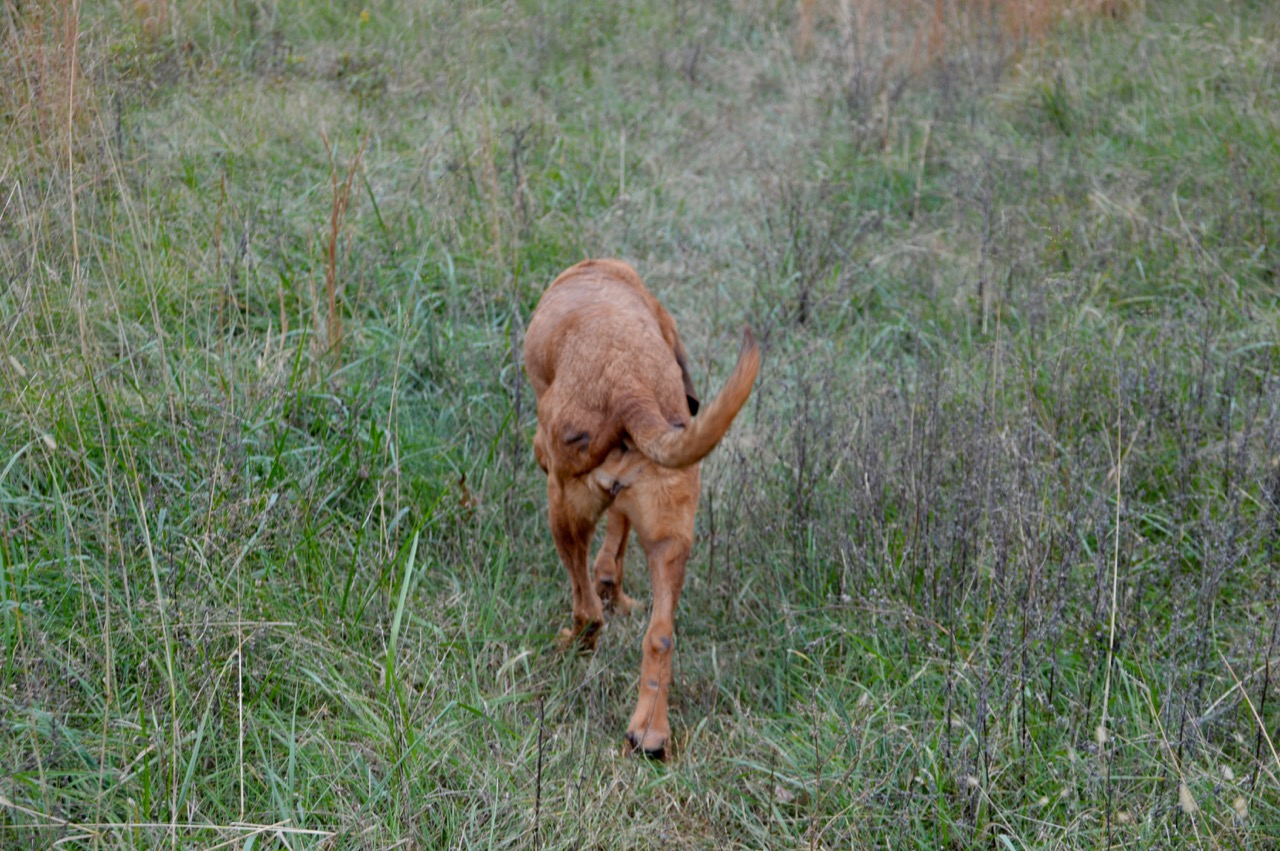 Hat and socks were on sale at drastically reduced prices at Orscheln Farm and Home store. I struck out finding a new USB hub. The new ones on the Walmart rack were only 2.0 instead of 3.0. Since I already have a 2.0 that works but is just slow transferring files ... I didn't buy it. 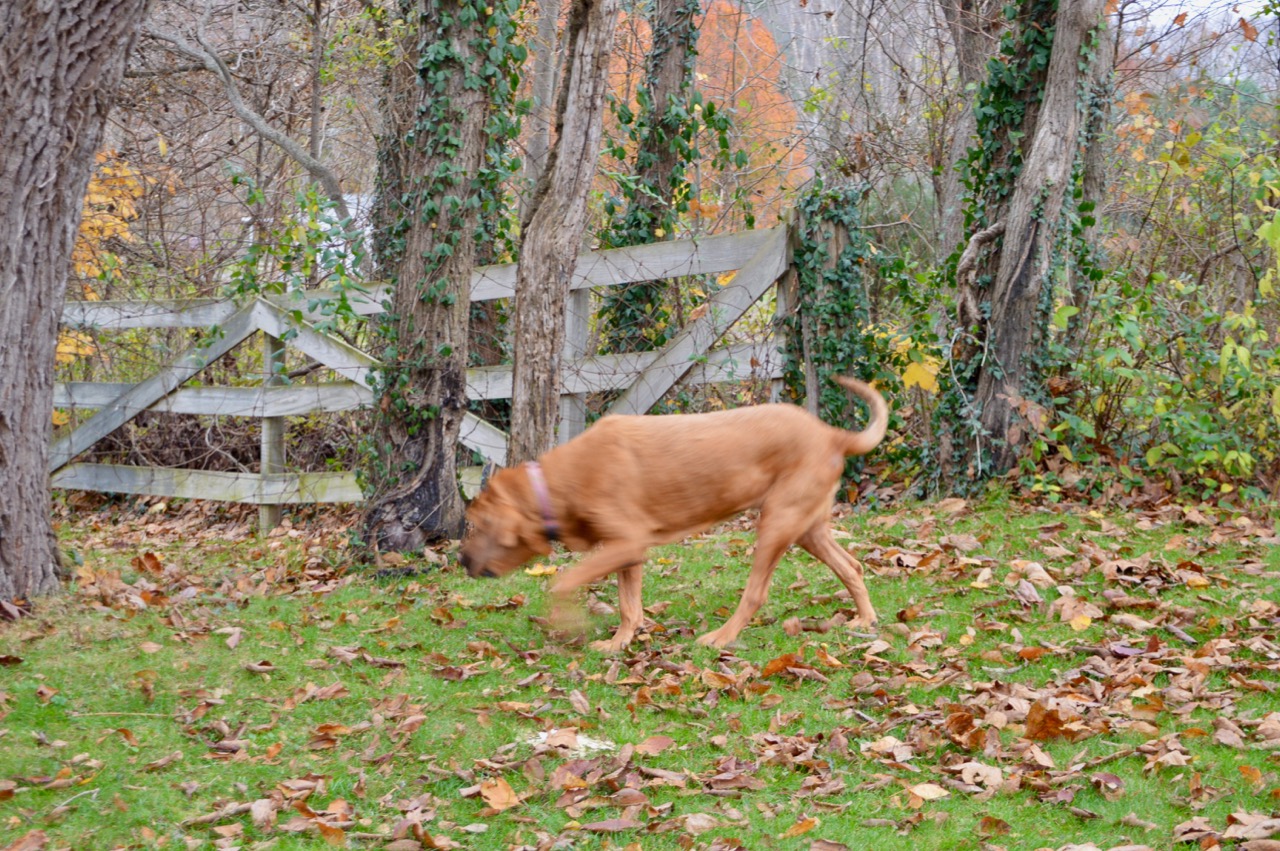 I wasn't able to catch it with my camera but Stella pressed her nose right up against that old 80 yr old metal fence. She couldn't quit identify what she was smelling. She looked confused and walked away. 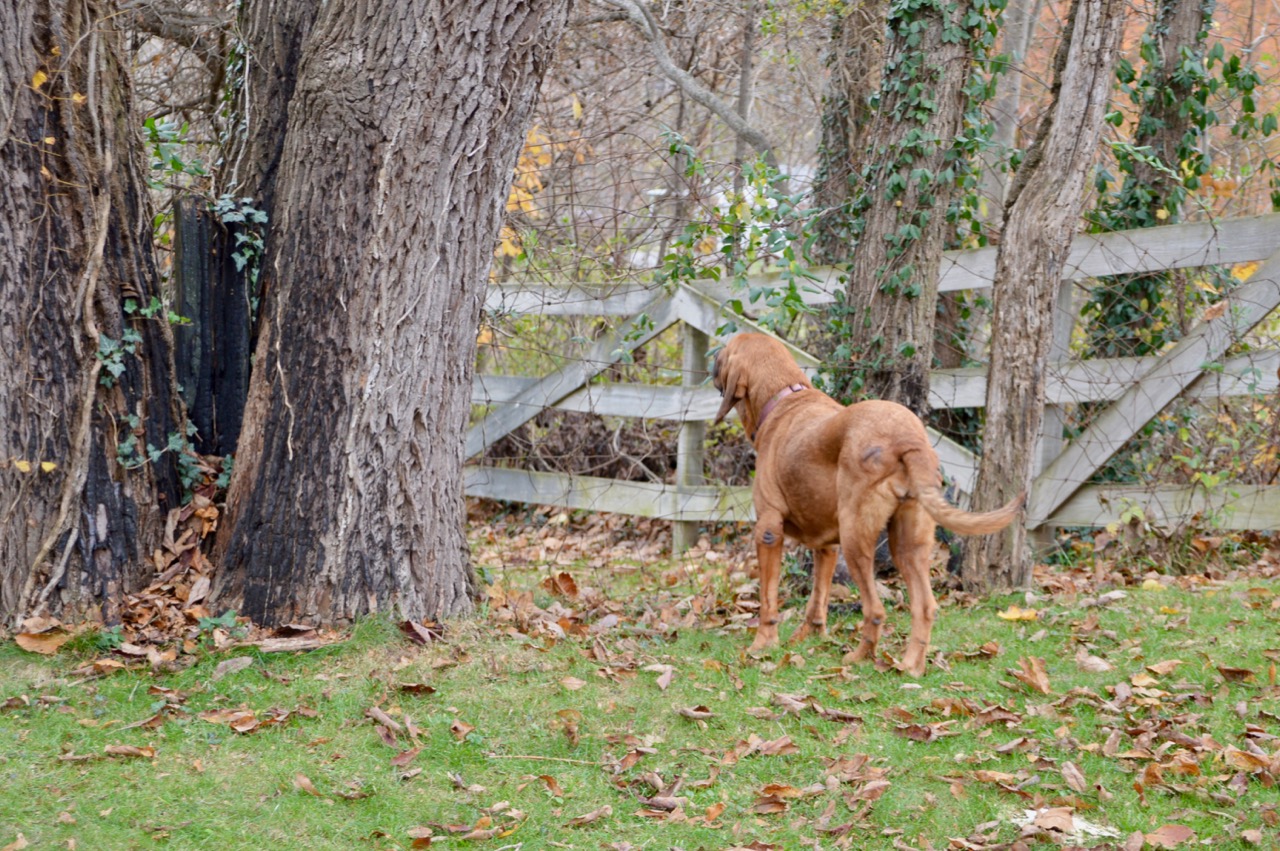 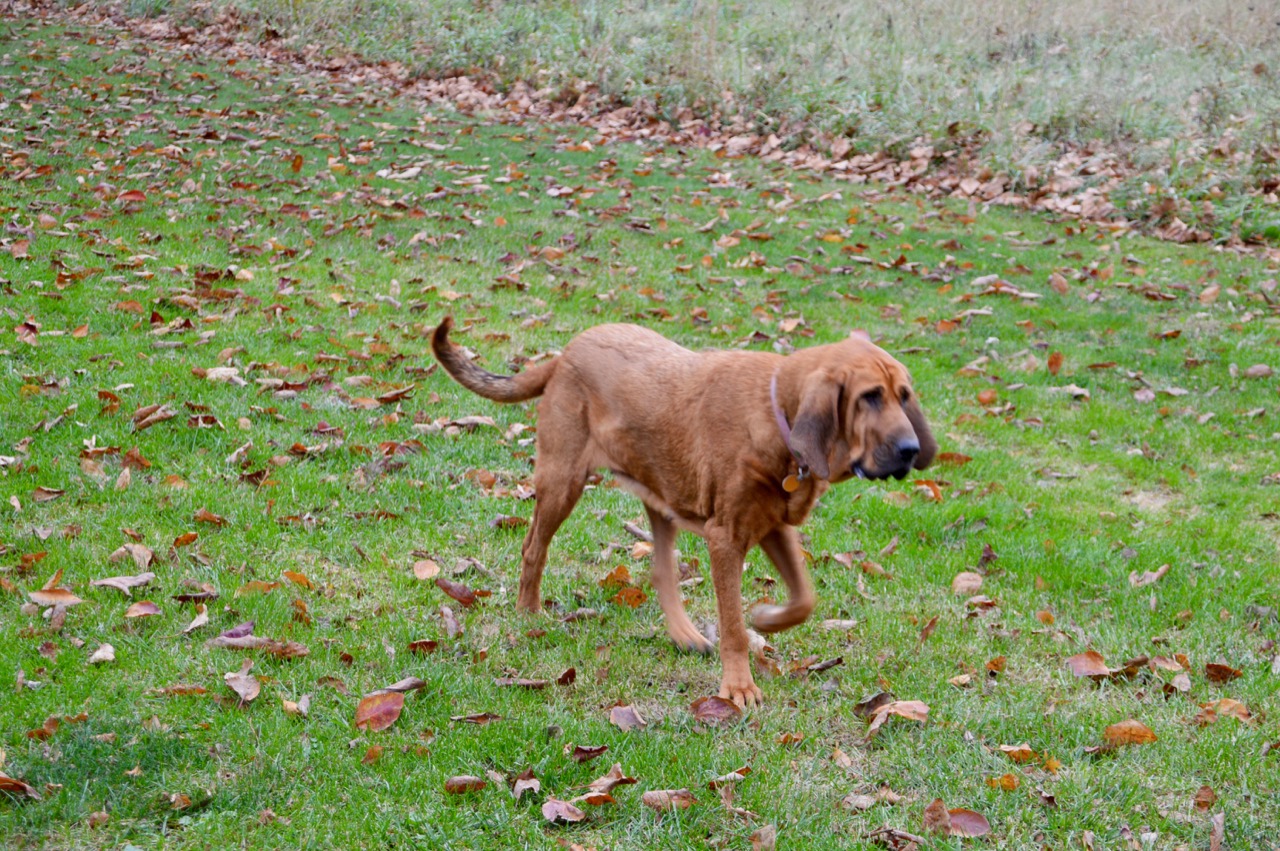 We stepped outside for a few short minutes after their lunch. The winds had picked up and it felt colder than it was in the morning, although the needle on the carport thermometer had climbed about 4° warmer. Stella didn't have any motivation to step into the driveway or yard. 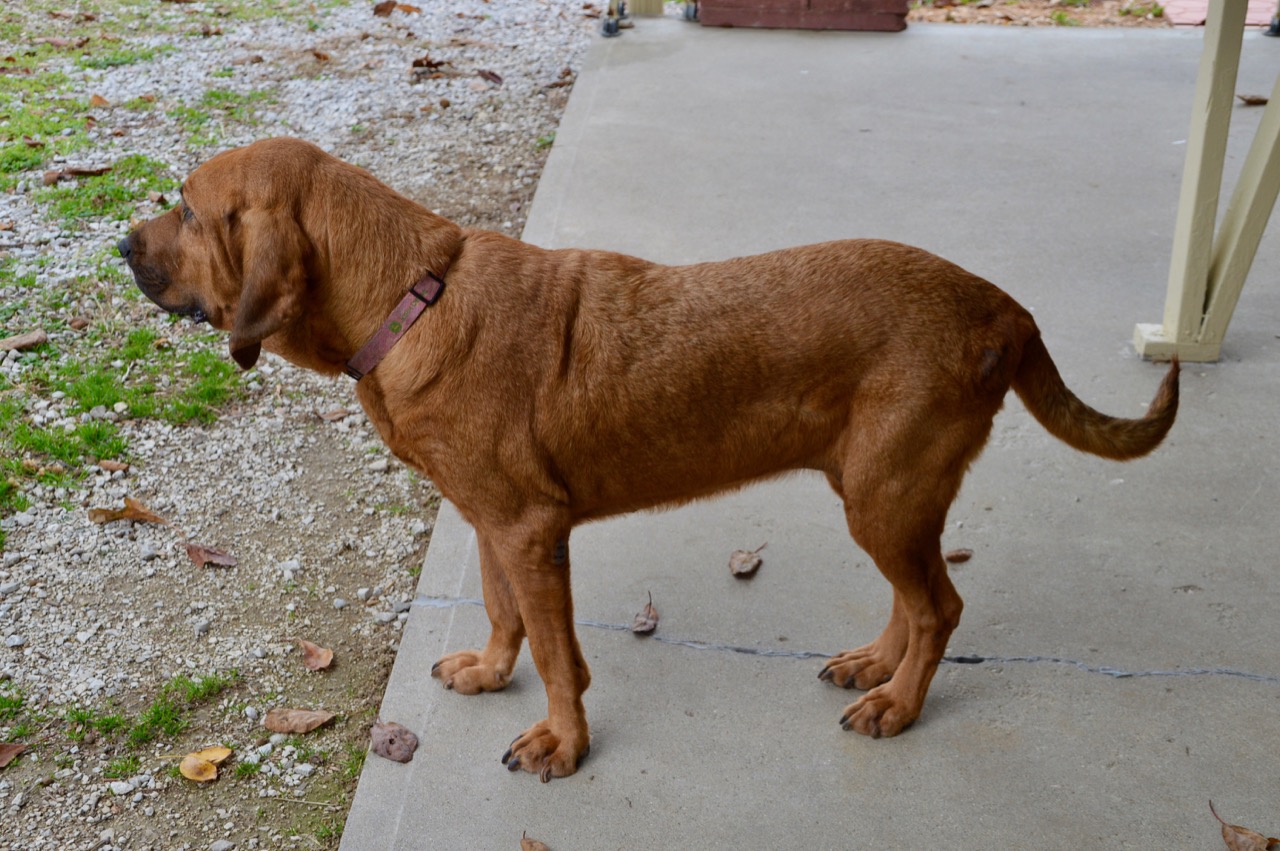 Heidi was out and back, heading toward the door within minutes. I am pretty sure that the Azalea you see is not going to make another Midwestern winter. All of them are set too far back from the edge of the roof overhang and rarely get the rain water. I water them by hand most of the summer. I know myself well enough that I will not be going out in the winter every other day to water plants. In fact that outdoor faucet will be shut down for the winter. 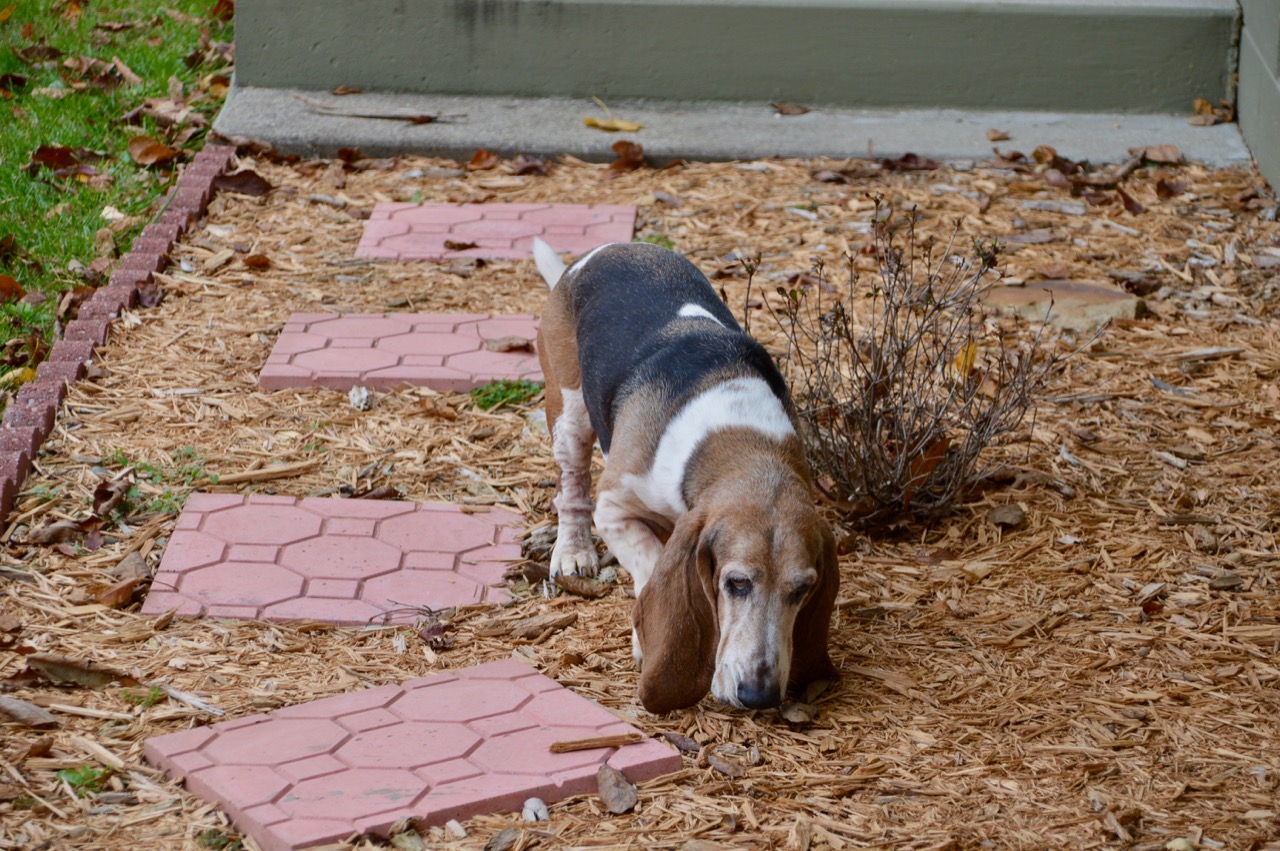 I have watched NFL football since I was a young boy, during the 1960's. Until the past 2-3 years I watched all the games I could, no matter who was playing. I love football that much. While I still watch college football nonstop these past few years my NFL viewership has decreased to watching just the Indianapolis Colt games, the NFL Playoffs and the Super Bowl (minus the halftime show).

Well as it was explained on the NFL channel the other day by an ex-NFL Quarterback, the league office changed the rules to the touchdown celebrations "to attract the younger crowd" .... UN-$*&#)*##^ believable !!!!

With that rule change players can choreograph their celebrations after a touchdown. With fewer NFL games being played on my tv on Sunday's, Monday and Thursday nights where I do not tune in, I have found there are plenty of other things I can do besides watching touchdown celebrations that have turned into multiple player dance routines or comedy acts. They can do whatever they please but I won't be watching that crap.

What else can I complain about before I go ... hmmmm

Oh yes, how about more Daylight Savings complaints ... with the new time of moving the clocks back, Stella and Heidi see no reason to sleep past 6:15am every morning, while it is dark outside. Their 'inner' clocks are still an hour ahead with no plans to change. Does that turn me into a complaining grump?????  LOL

Other than that, it was a great Friday here in 'the tropics' of Southern Indiana. IU basketball game tonight at 8pm local and that's a good thing.
By Steve at 3:00 PM