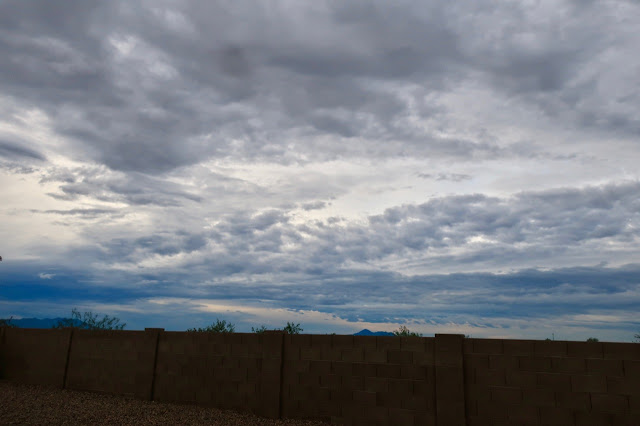 I knew after yesterday's 61 photo post and a tour of some sort outside of the yard or house, putting something together today was going to be tough. It would probably be more verbal than photogenic and hardly any excitement. Yet, like the morning skies showed me this morning, not every day if full of sunshine at 5:30am and not every day will be exciting. Still there were going to be some situations today where the results might be surprising. 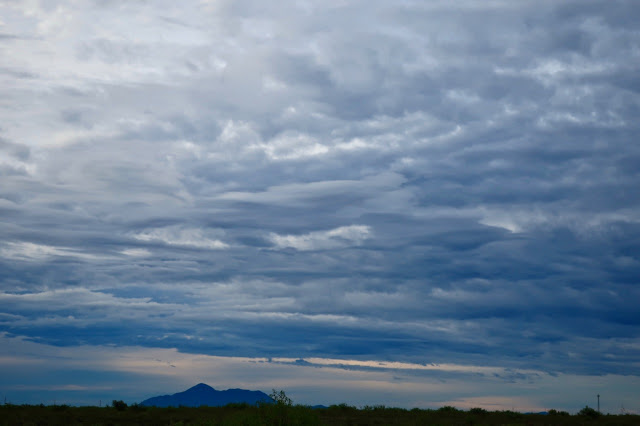 As Stella and I prepared for our morning walk, the skies were not the only thing that was different today. A new development happened on the 1st of August that put a slight dent in the daily routine. I could no longer have that cup of coffee before we took a walk unless I go back to getting up in the dark. Why would I want to get up before sunrise? So we had to make a slight change to our schedule. It's also tough to do. 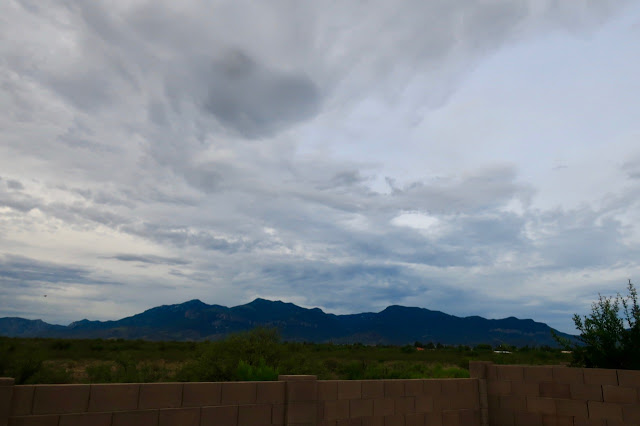 Around 6:16am this large yellow school bus backs into the cul-de-sac at the entry of the neighborhood and waits for all the kids to walk down the street to get on this bus. I am not sure if it is for elementary or jr. high because there is a second bus that does that same thing about an hour later. Kids do get on both buses. With that 6:15am time frame, Stella and I have to be back inside the house or our daily walk will get really complicated. A cup of coffee before the walk will put us past that mark. 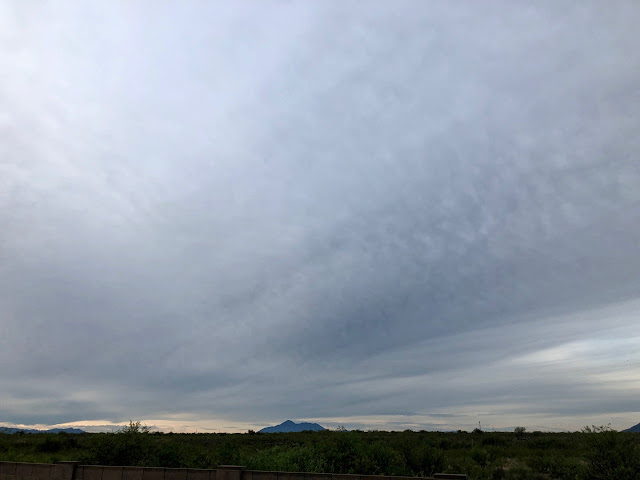 So after the walk I was able to sit and watch the clouds change formations as I had my two cups of coffee. The temps had barely hit 70° and the breeze was cool from the SE. I had not made up my mind up yet whether to do any bike riding today, plus Stella wanted to make a full inspection of the fence line after last nights heavy rain. 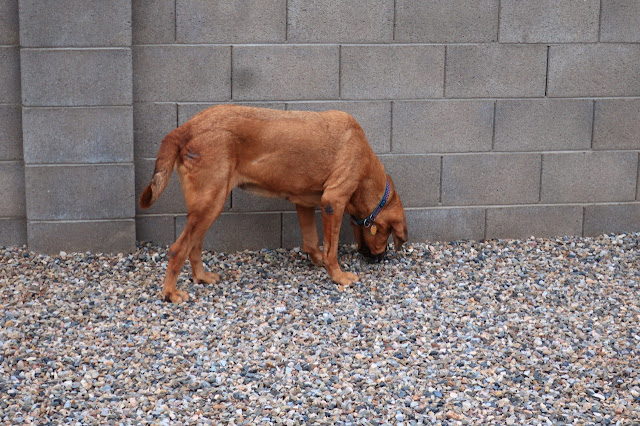 It was then I remembered I was going to have furniture delivered today.  The last pieces to the furniture I bought one day after I arrived, on June 14. It took all of this time to get a couch and loveseat delivered along with two extra kitchen chairs. I was only joking with the furniture store manager a few weeks ago when I called to see if they had forgot my remaining order, when I asked "what do they have to do ... make it?" ... he replied "as a matter a fact they do." He was serious. 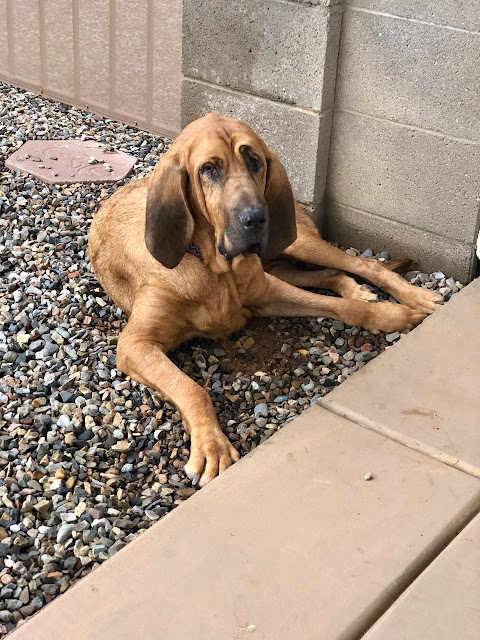 While Stella enjoyed the cool temps I realized I had a 4-hour window to wait around for them to show up. I spent most of my morning while I waited for them, editing all the posts that I had transferred from the WordPress blog. I didn't get all of them done but I did about 3 hours worth.

After I walked back outside with my second cup of coffee, Stella decided she needed to be closer to my chair. The one that is comfortable but doesn't match anything. Yes, probably a little anxiety is still left with the move. I have a few posts worth of stores on that period of time. She did freak out a few times, that you will read about later. 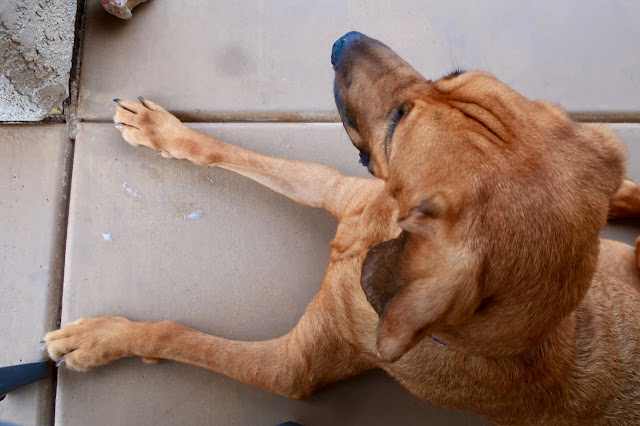 She lifted her head from her sleeping position when she heard the beeping and the diesel engine down the street. She doesn't know it's the morning school bus backing in. She also thought if she looked around the yard it would give her the answer she was looking for. Plus the next door neighbor might be tossing her some morning bbq chicken since he did that the last two Sunday nights, after asking me if it was okay. 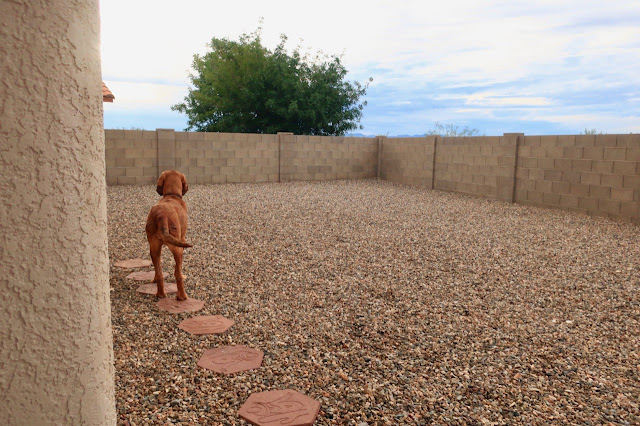 It was lunch time and no one had shown up with the furniture which didn't matter to the hounds because at 11am local time they like to be fed their lunch. Just like in 'the tropics' Stella also likes to take a nap in the hot sunshine right after her lunch. 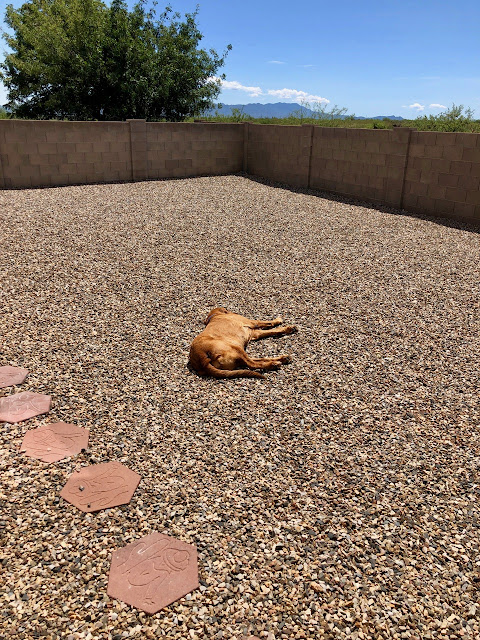 The furniture truck pulled up in front of the house while the hounds were enjoying the sunshine out back. So it was simple to keep them in the yard until everything was set inside and the paperwork was signed for proof of receipt. It was sunny today but the low 80's and with my early morning routine of leaving the windows open filling the house with cool air ... I had not turn on the AC yet.

So now for the real test.

Long time readers will know from photos that all of the hounds all the way back to 1997, at least in Indiana, had free reign of the house and could sit or sleep anywhere. I had leather couches and chairs then but not now. Stella's drool could kill a brand new couch's upholstery so I hope to train her to stay off of the furniture. Heidi will be a little bit harder to control because she has total freedom in the house when I am gone. She has never destroyed a thing while being left in the house. So it's very likely I'll come home sometime and she will be on the new couch or loveseat UNLESS I buy a new baby gate to block her from the living room. (It's another Stella story explaining WHY I need to buy another baby gate).

So as I sat on my new couch reading Chinle's book The Cessna Cafe, I watched both hounds to see if they even attempted to get up on the new furniture. Heidi didn't go near it and ended up on her favorite blanket in the same corner as it was before the furniture arrived. Stella did the full inspection with her nose, looked at me for a few seconds and then laid down right in front of it for a short nap.

Yes ... I could buy a new sheepskin type blanket to put on the couch so they can lay on the couch but that doesn't mean that bloodhound drool would stay WITHIN that blanket and if it didn't, it's hard to get "gorilla glue" off anything, any material, once it dries and will stain if it is wet. 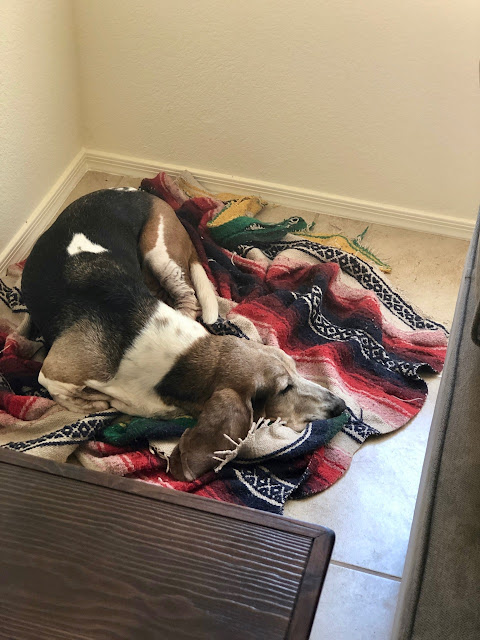 So that's it. The house feels a little more like a house now that I have some furniture in the living room. Just one small chair with a coffee table and end tables didn't do much for household decor for the past two months. I did leave room in back of the loveseat for Heidi's blanket to sleep on and for Stella to have enough room to stand and look out the window. They love doing both of those things.

I will not take the time to set up my tripod, manually focus my camera in hopes of catching a lightning strike ... but I did catch this on the other night with my iPhone ... barely. That bit of orange was like a huge ball of fire when I clicked the shutter button ... I didn't know that I even caught that until I downloaded the photos. 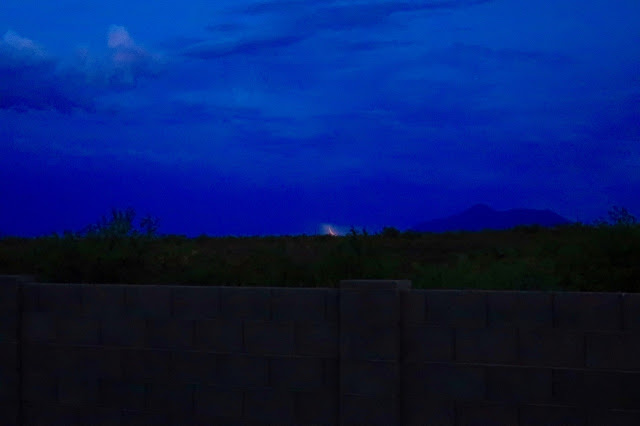 It's that time of year where it's going to rain for a short period of time every afternoon or early evening. Maybe not here where I live but other parts of town and within the view of my eyes. I have a group I follow on Facebook from the local county where people can post their photos from snakes, spiders, flowers, rain, monsoons, lightning or food. Plus I can see it raining sometimes off in the distance, just not where my house is.

As I edited photos this morning from blog posts from May back to December 2018, I saw a lot of rain, a lot of ice and snow in those photos and I glanced and saw things like -7° or 10° and knew that Stella and I would not have to walk through that any longer. Nor would Heidi have to be curled up in her sleeping bag to keep warm, even with the heat on inside the house. The more blog posts I saw the more I confirmed to myself why I moved.

I got an email today that said my blog had made a "huge turn into a new world - one of exploring the West." She hoped I would continue to get out and about like that ... That is definitely my plan. As the temps cool down I plan to add hiking to my daily activities where I can take my camera and in some cases can see how the hounds do in that setting.

There is going to be a lot more stuff to blog about out here as a few readers already know because they have during their RV travels. The Western states are so much more easier to write about than east of the Mississippi River. Also while editing my blog posts I saw what I already knew ... boring boring boring ... the same walks, the same photos in the same parts of the hound walk, the same yard work stories and the same farm equipment photos.

I have made two trips where I took a lot of photos and I plan to turn them into two different blog posts in the very near future. Some that follow my Facebook account have seen them and know what I am talking about.

One last thing or two last things ... I have only 76 more posts to edit and publish from the Wordpress blog. I like having everything in one blog ... although I have to keep that Wordpress blog active otherwise I lose all the photos in those blog posts that I have transferred. Second thing is, as things have sorted out these past few days since I returned to blogging ... I will be posting most likely around 6pm-6:30pm Pacific Time instead of Eastern Time.

For those curious, the hounds have adjusted very well to this move. I'm sure that Heidi misses her green grass yard and her big leather chair but she has also found that warm patio is great to sleep on since it's in the shade and she prefers 6-7 different places in the house to sleep depending what time of day or night it is, so the chair isn't needed.

Stella still puts her nose to the ground every walk but is really more curious why all of those different birds talk to her. She has also figured out it feels good to run or trot on the sidewalks or in the middle of the streets since we are always walking when the sun comes up. (very little if any traffic) She gets the same distance if not a little more and by the time we are back home all she wants is some water and a nap.

Stay tuned for more stories and photos from the 'wild west'.
By Steve at 6:15 PM