A Sunday Drive To Bisbee 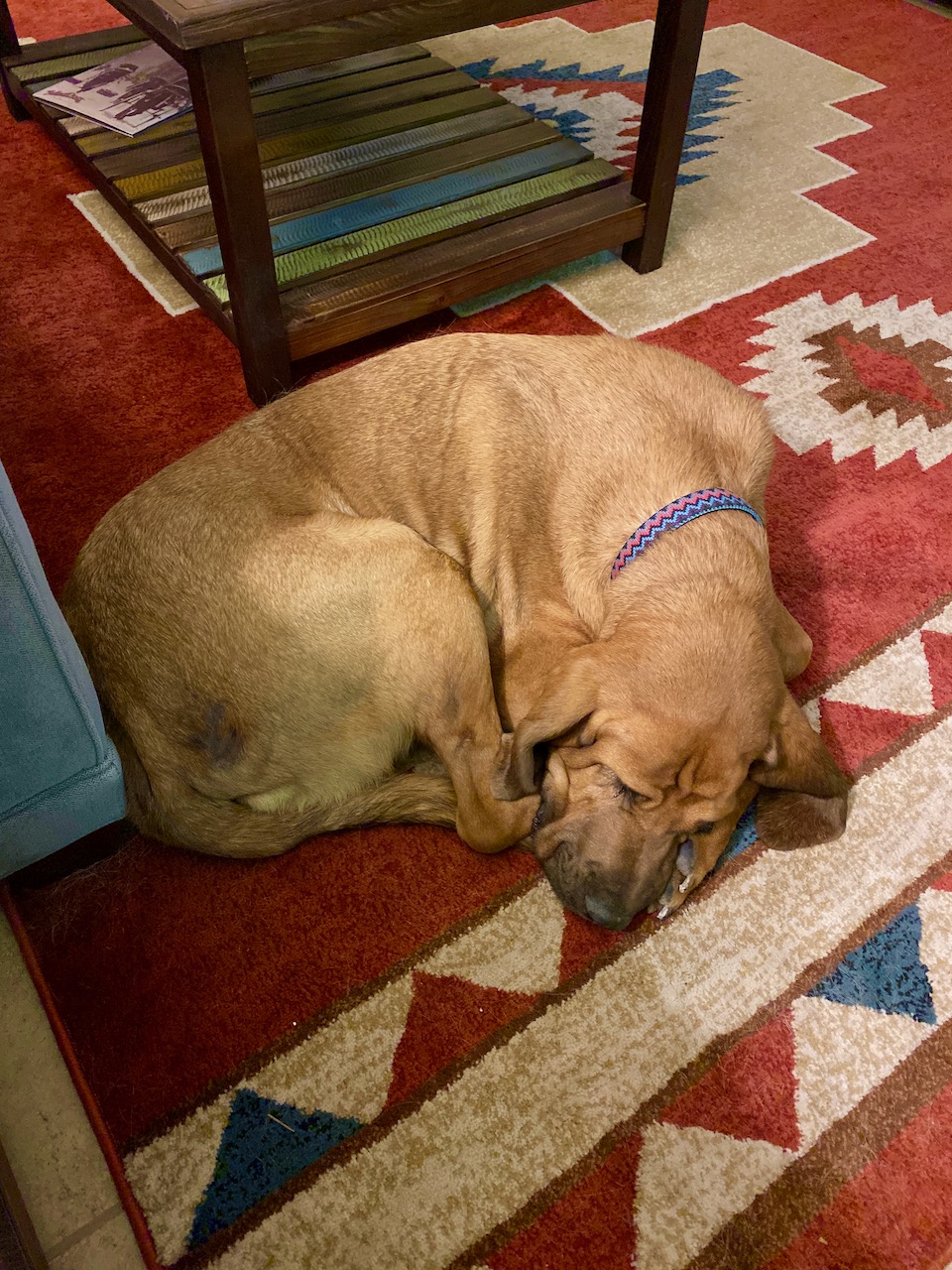 While Stella spent most of "College Football Saturday" sleeping I also had a lot of time to think and read again about the new iPhone 11 Pro. I stood or took walks during commercials, halftimes and between games. I tried to listen to my body as the surgeon told me to do while hoping I wasn't doing too much. Out of all the activity and thinking on Saturday, one thing would not leave my thought process ... that stupid new phone. I follow MacRumors on Twitter and about the time I would shove the thought of buying that phone aside ... they would post another great photo taken by the 11 Pro. 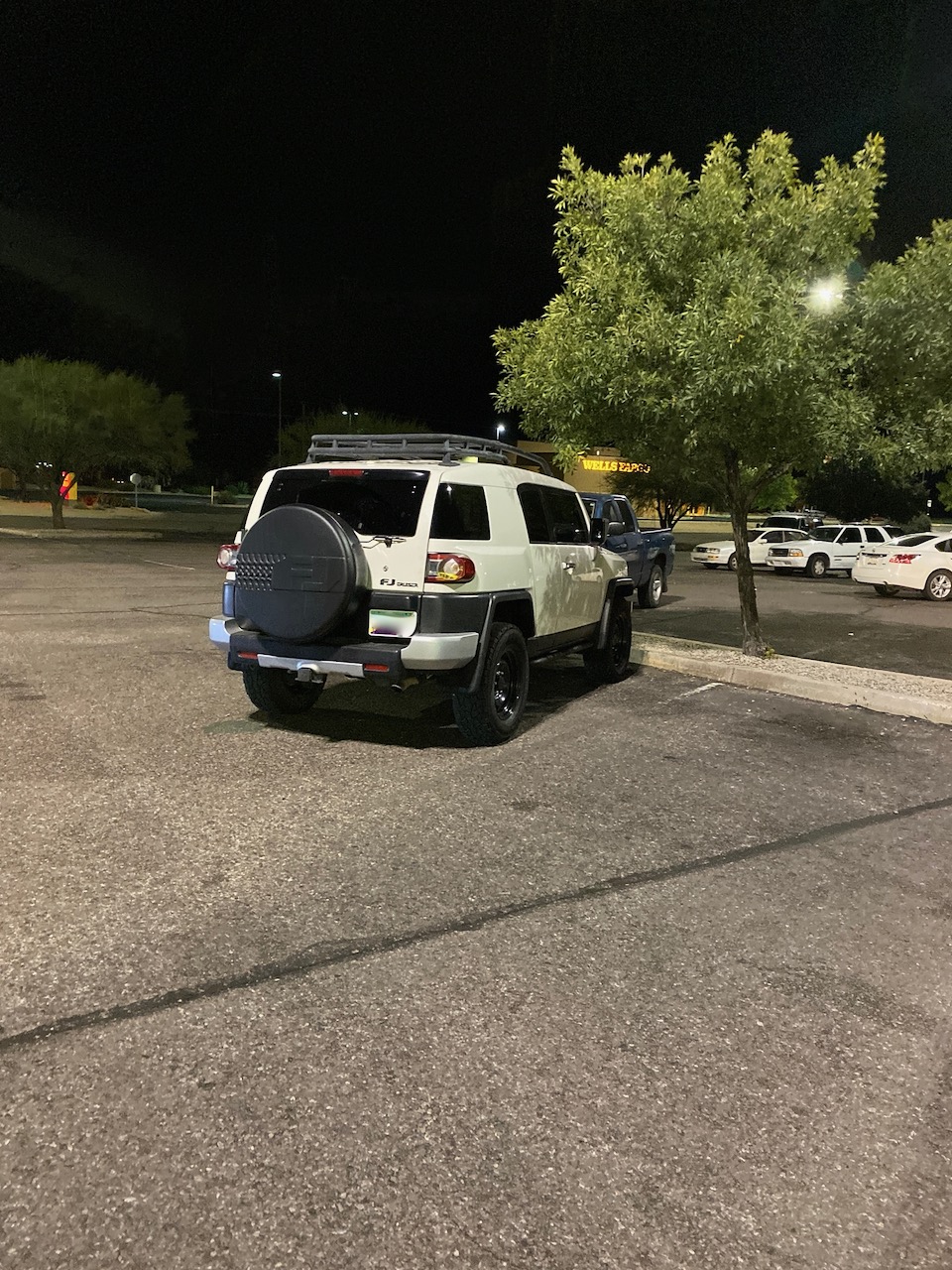 Discussing the options and reasons with a friend, by 6:30pm I was on my way to Best Buy with only one thing I was going to do. I was buying the iPhone 11 Pro and trading in my 8+. It took longer for me to do the transaction but things had changed in the past two years since I bought the 8+ ... I had to stand there in the store and move all the data of the old phone to the new phone ... instead of coming home, plugging the new phone into my computer and restoring the data from my backup.

As I walked out of the store in the dark ... I took my first photo with the new phone, the FJ under the bright parking lot lights. 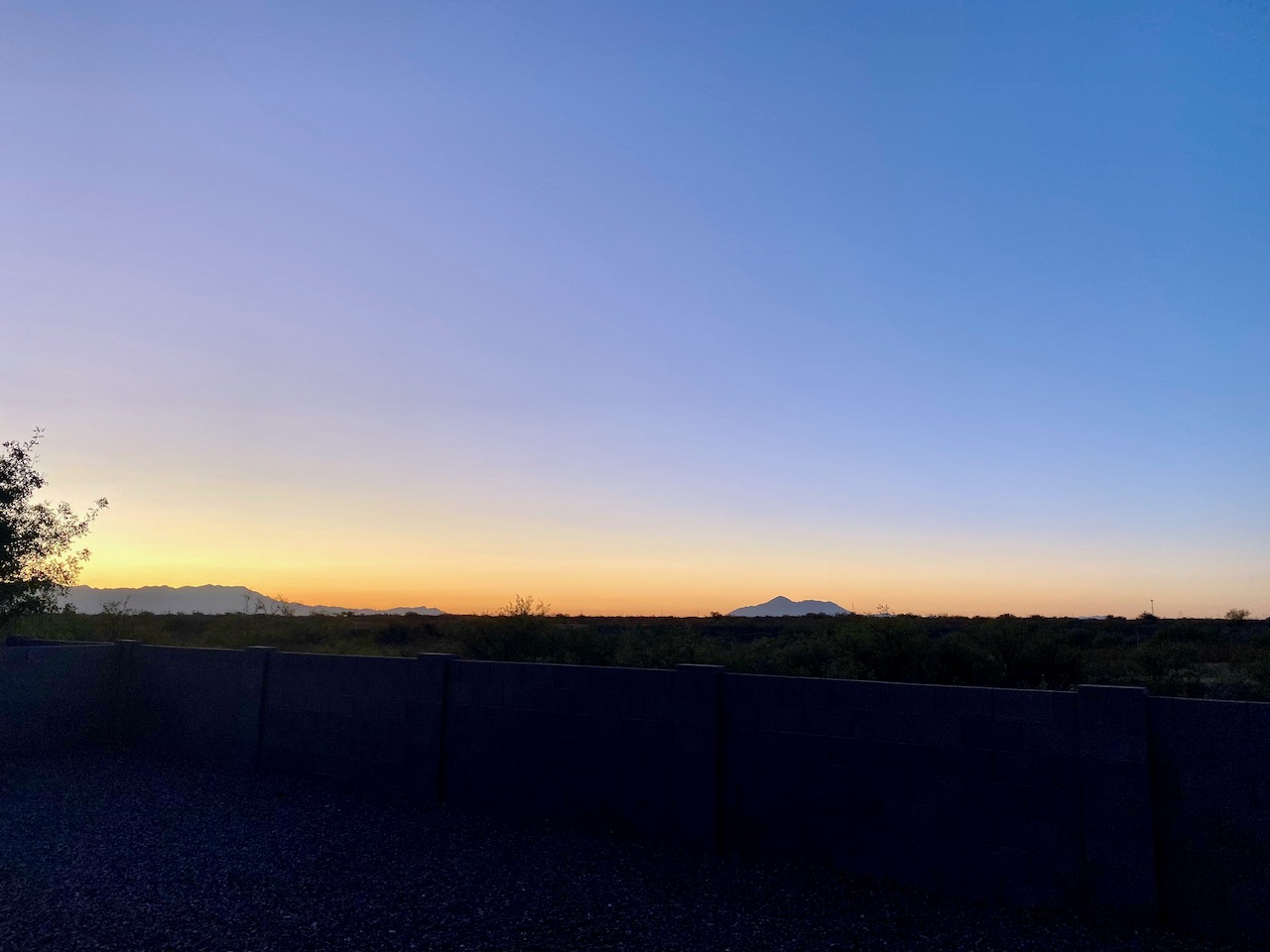 I quickly read through the changes with the new phone and how to do things, synchronized my two watches to the phone and by 11:00pm I was calling it a day. I did not dream about the phone, I didn't wake up at 1:00am like I had been doing nor did I hear Heidi's body shake telling me she wanted to go outside. By the time the sun rose I was still feeling good about the purchase the night before. 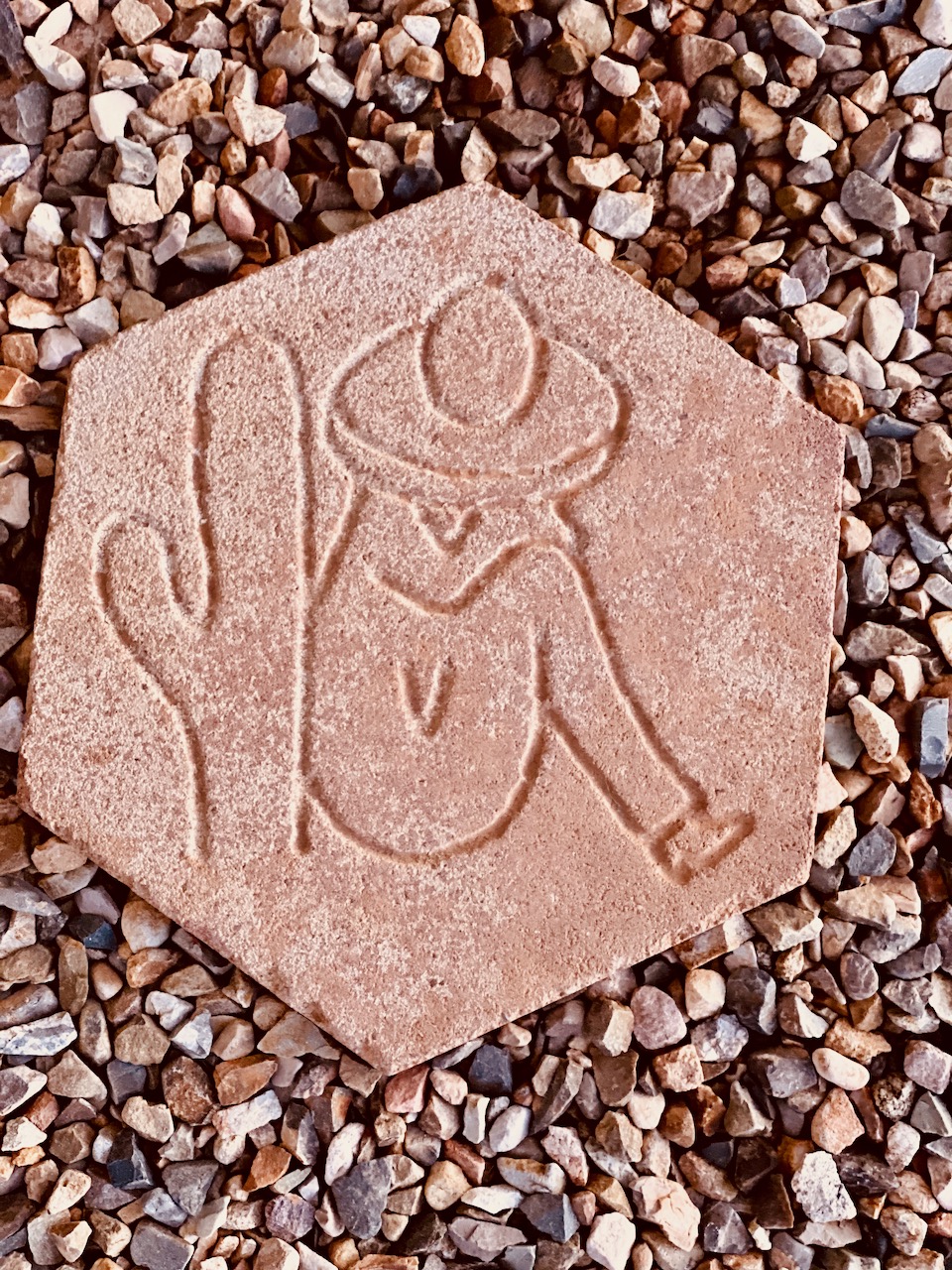 The house filled with cool 48° air and since we overslept past our normal wakeup time, Stella was ready to eat her breakfast as soon as we walked into the kitchen. The problem was, Heidi was still sound asleep and it was almost 6:30am. 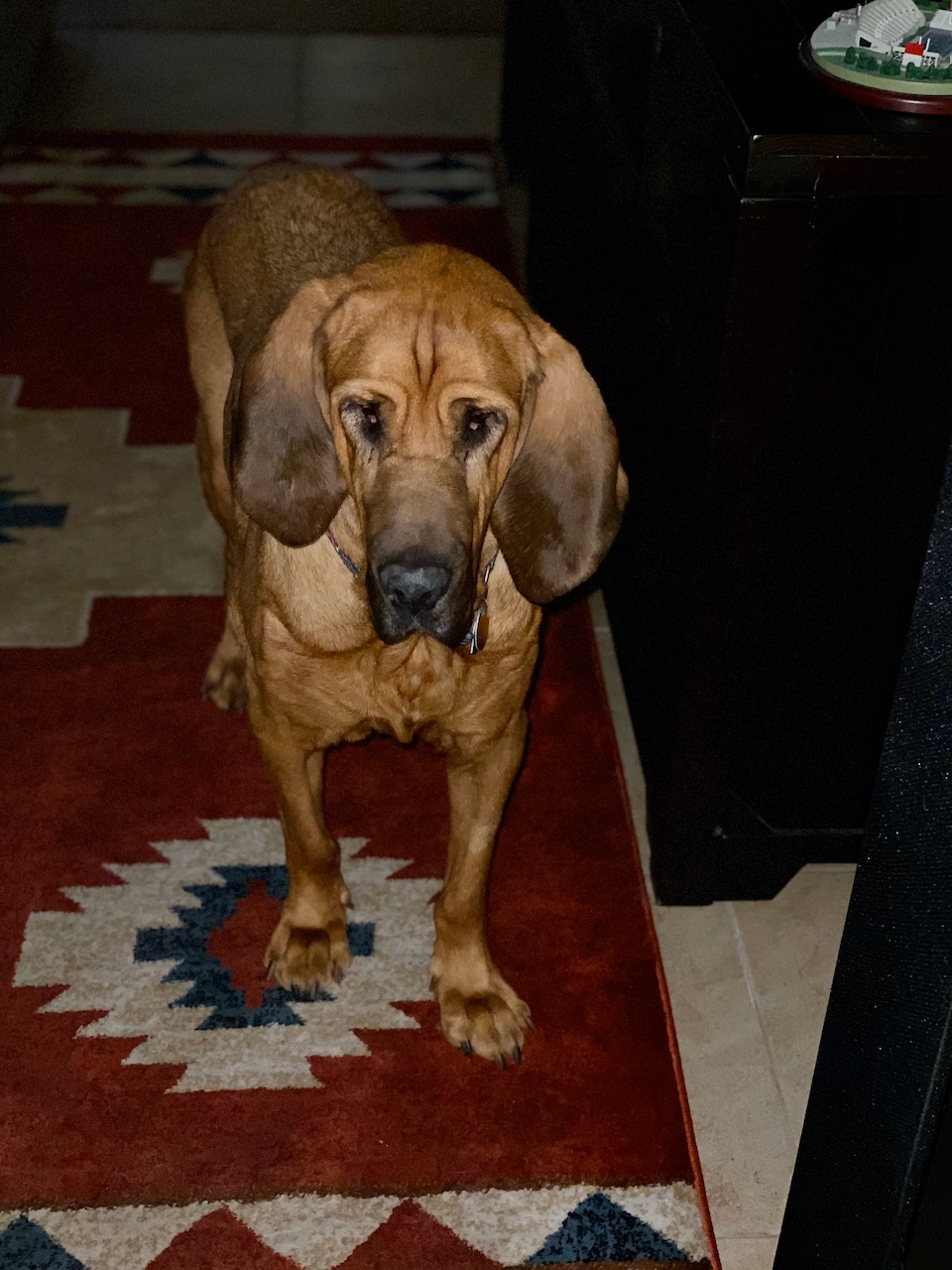 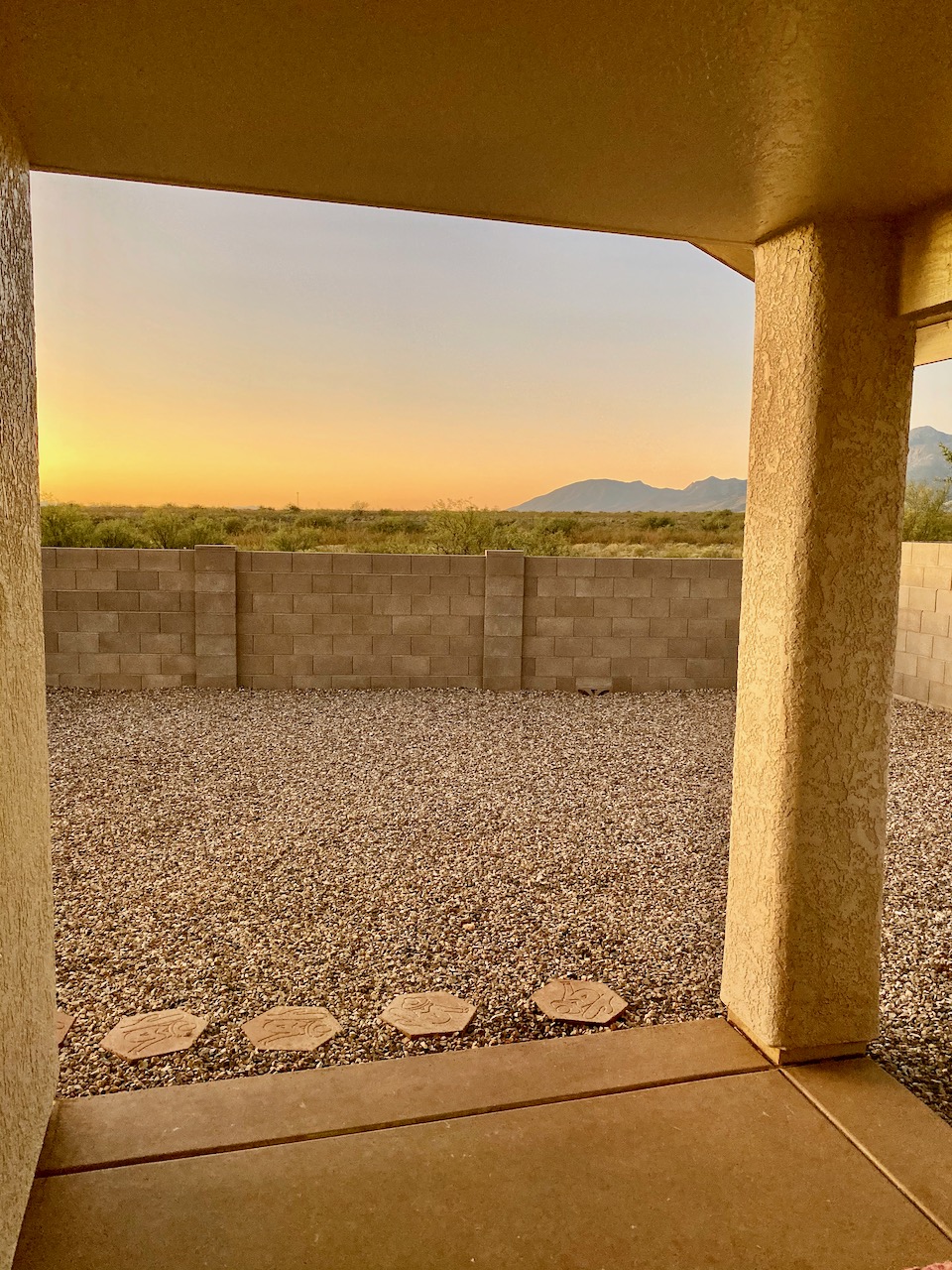 This is the view as I step out on the patio. 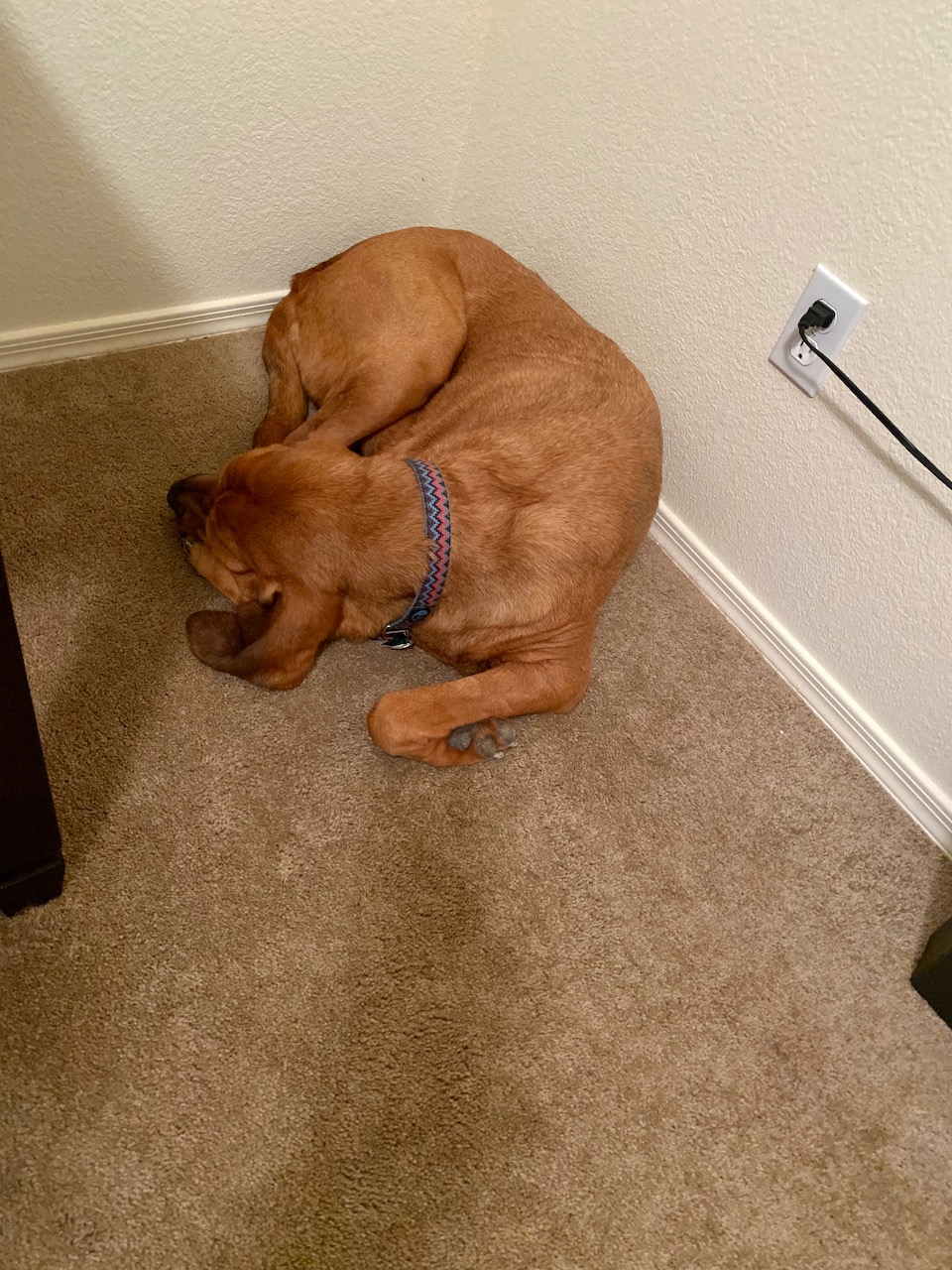 Once Stella figured out she had to wait for breakfast, she joined me in the computer room and slept for almost an hour before I woke her and Heidi up to have their breakfast. I had spent most of my hour re-synchronizing one of my watches to the phone so the Activity would be tracked when I wore it. 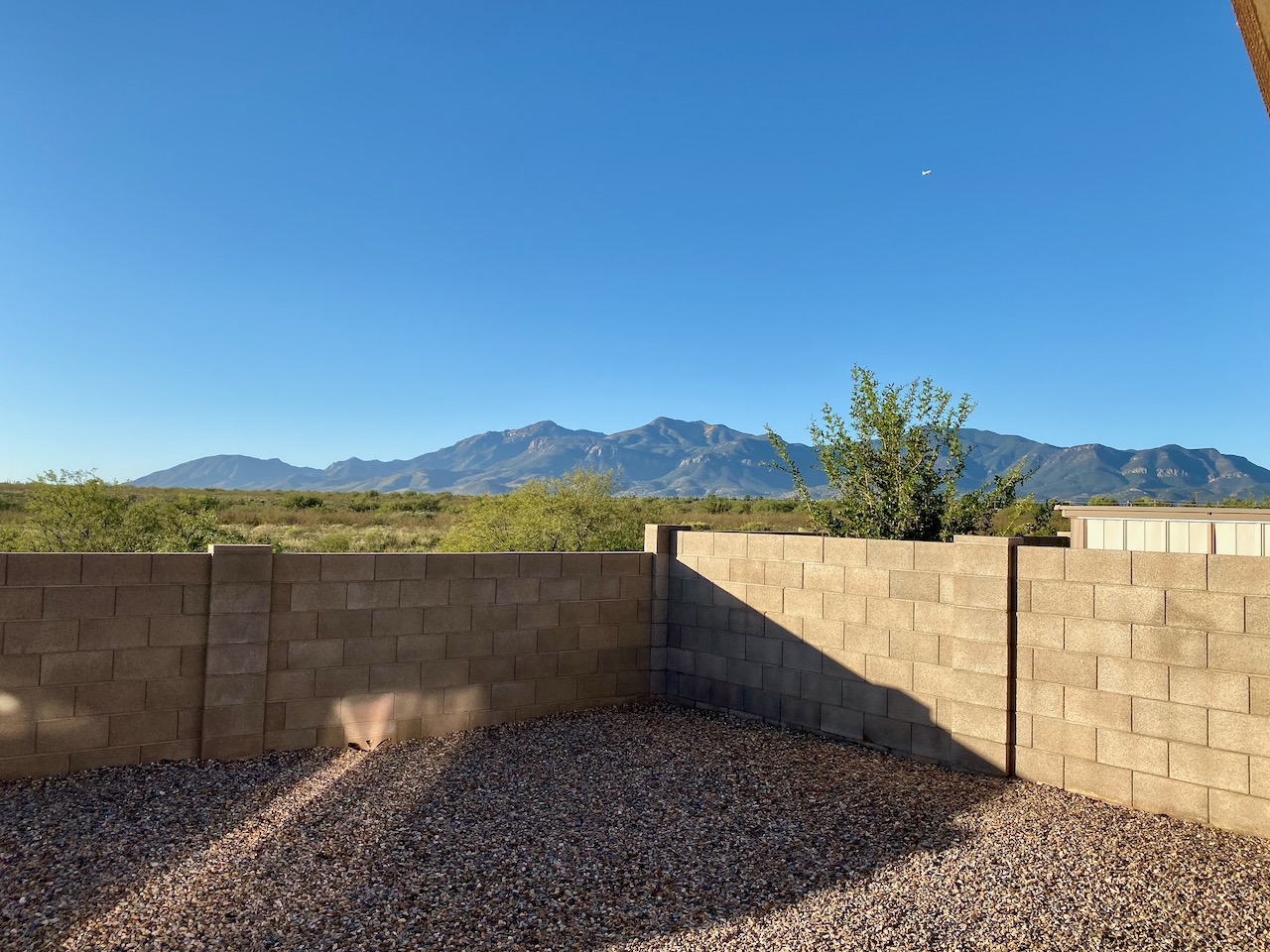 After I returned home last night I caught the last 2 innings of the Yankees - Astro game. What a finish!!! The Yankees hit a HR in their last at bat to tie the game and Houston hit a HR to win the game. The Yankees and Dodgers won the most games this year and spent the most money on their rosters ... neither team made it to the World Series. 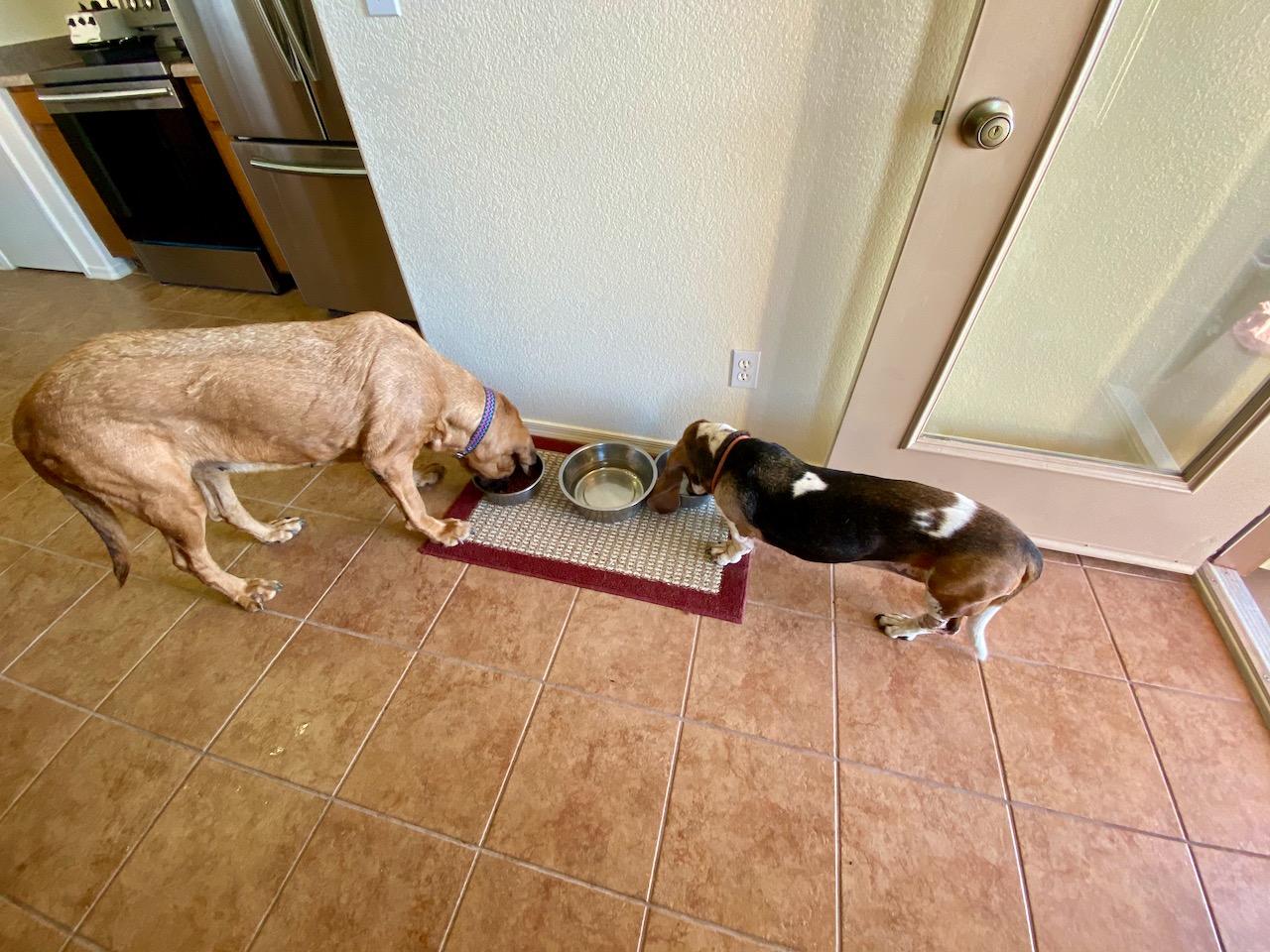 I tried the new feature in the camera by shooting 'outside the lines'. That is where the hounds eat twice per day and there has never been a fight over food since they day they started living together. Shooting "outside the lines" stretched them left to right. 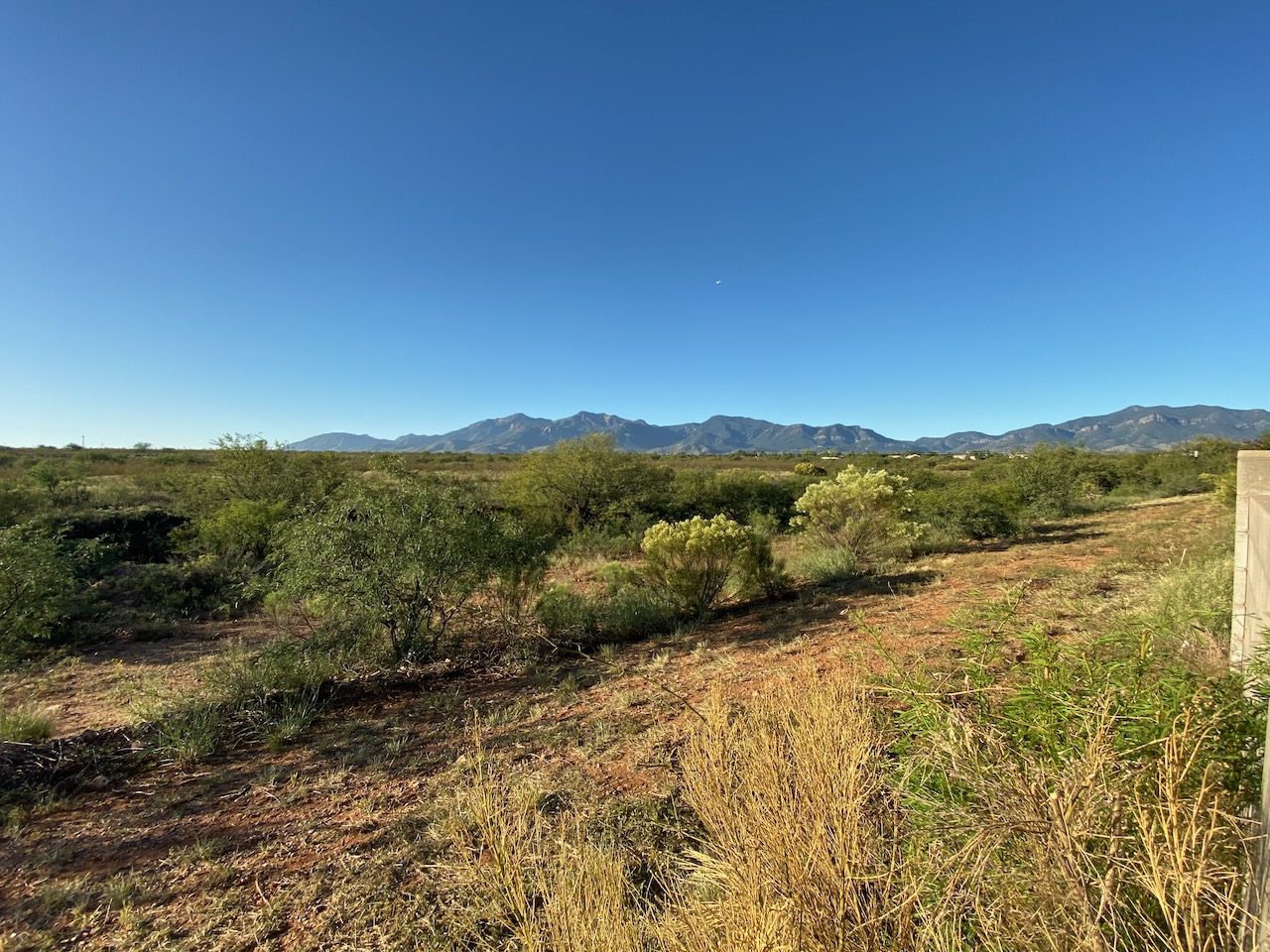 I woke up this morning without any kind of pain or soreness. The feeling I call "the rock" was not in my hip this morning. I didn't know how to take all of this news so early in the day, so I did a few laps around the backyard. 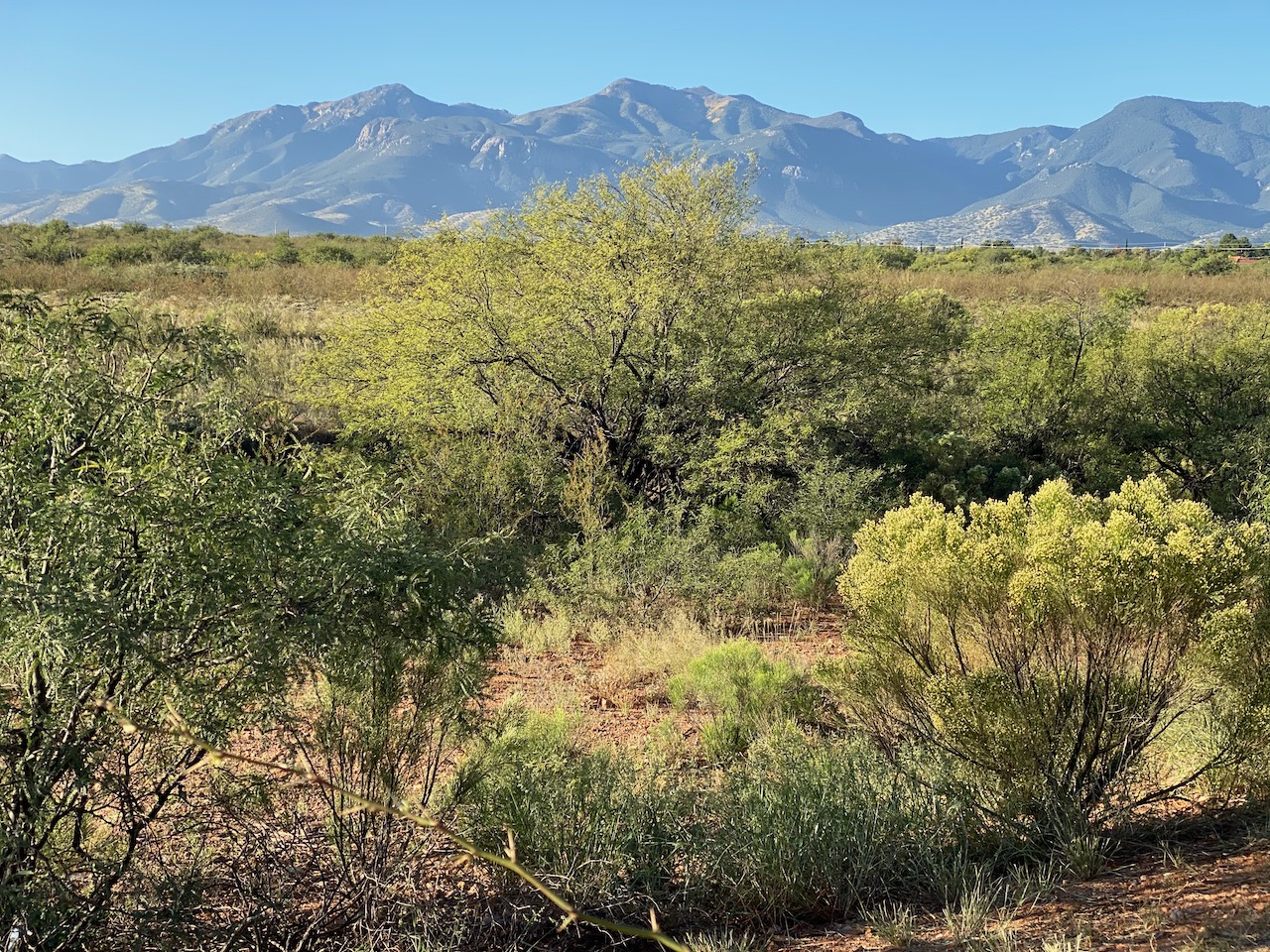 After three laps of feeling pretty good, I walked through the house and headed out to the sidewalk with plans to walk to the end of the street and turn around. By the time I walked to the end of the street I felt so good that I decided I would see if I could walk the path that Stella and I use to take every morning up until April 25th.  By the time I would return to the house I had covered .67 mile. 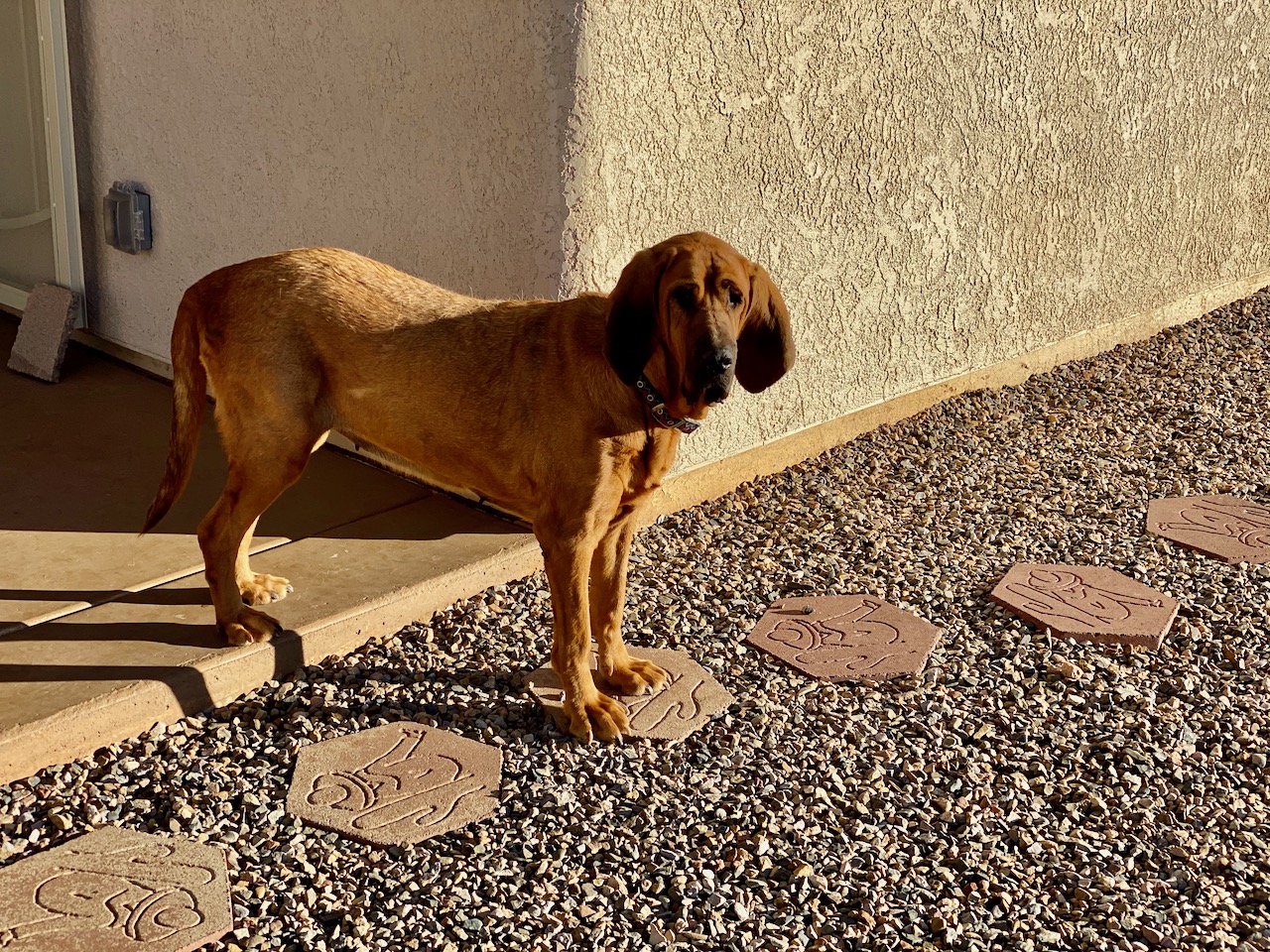 Stella was standing by the front window when I returned. It was good that she did not know that I took the walk without her, but I found out that I was strong enough to make the complete walk but not really strong enough to walk with a 90 pound bloodhound. I have no idea when I will be able to take her but I think it will be sooner than later. 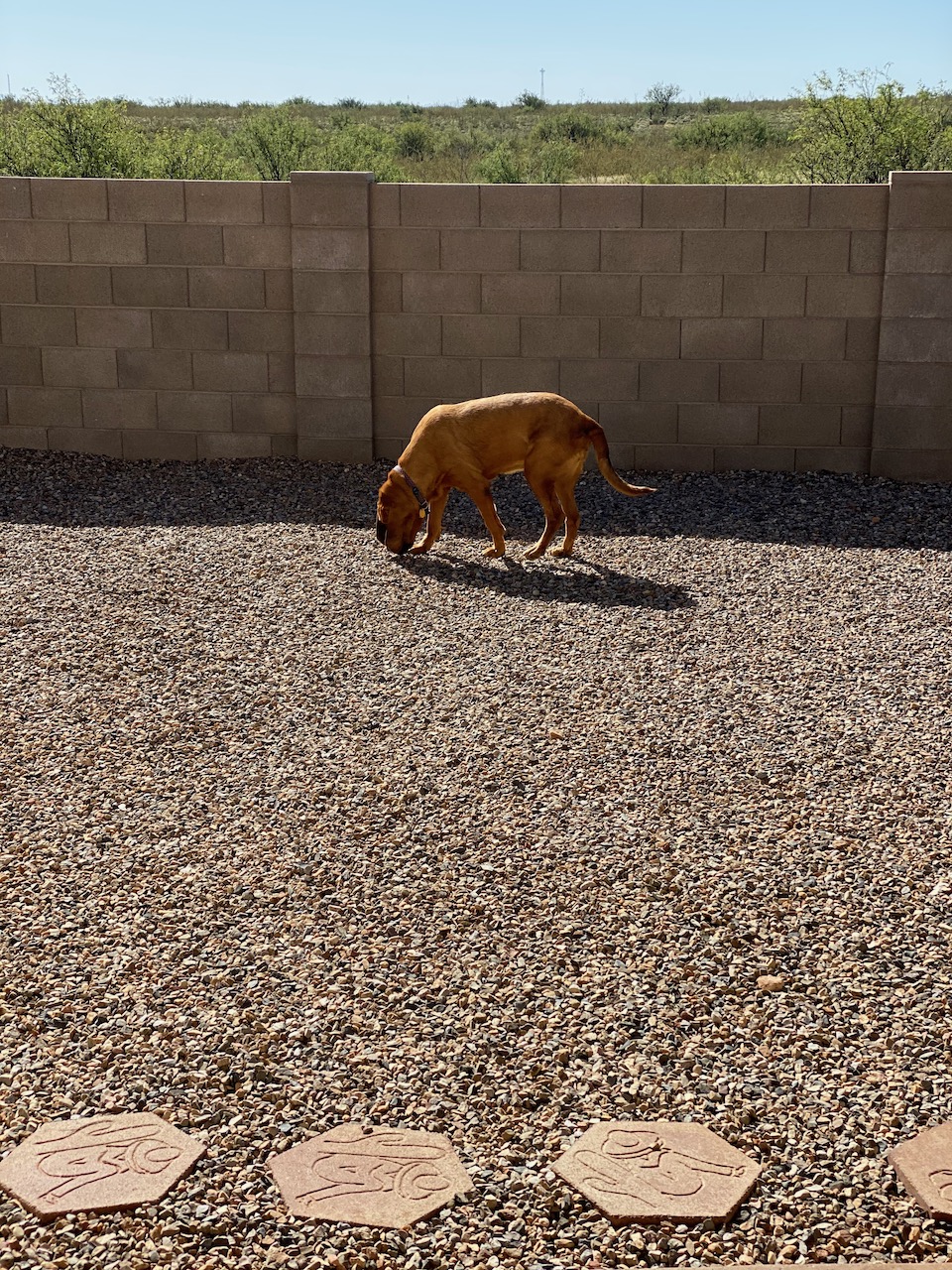 Like Heidi she likes to explore the yard. A little different than exploring that green grass back in the tropics. 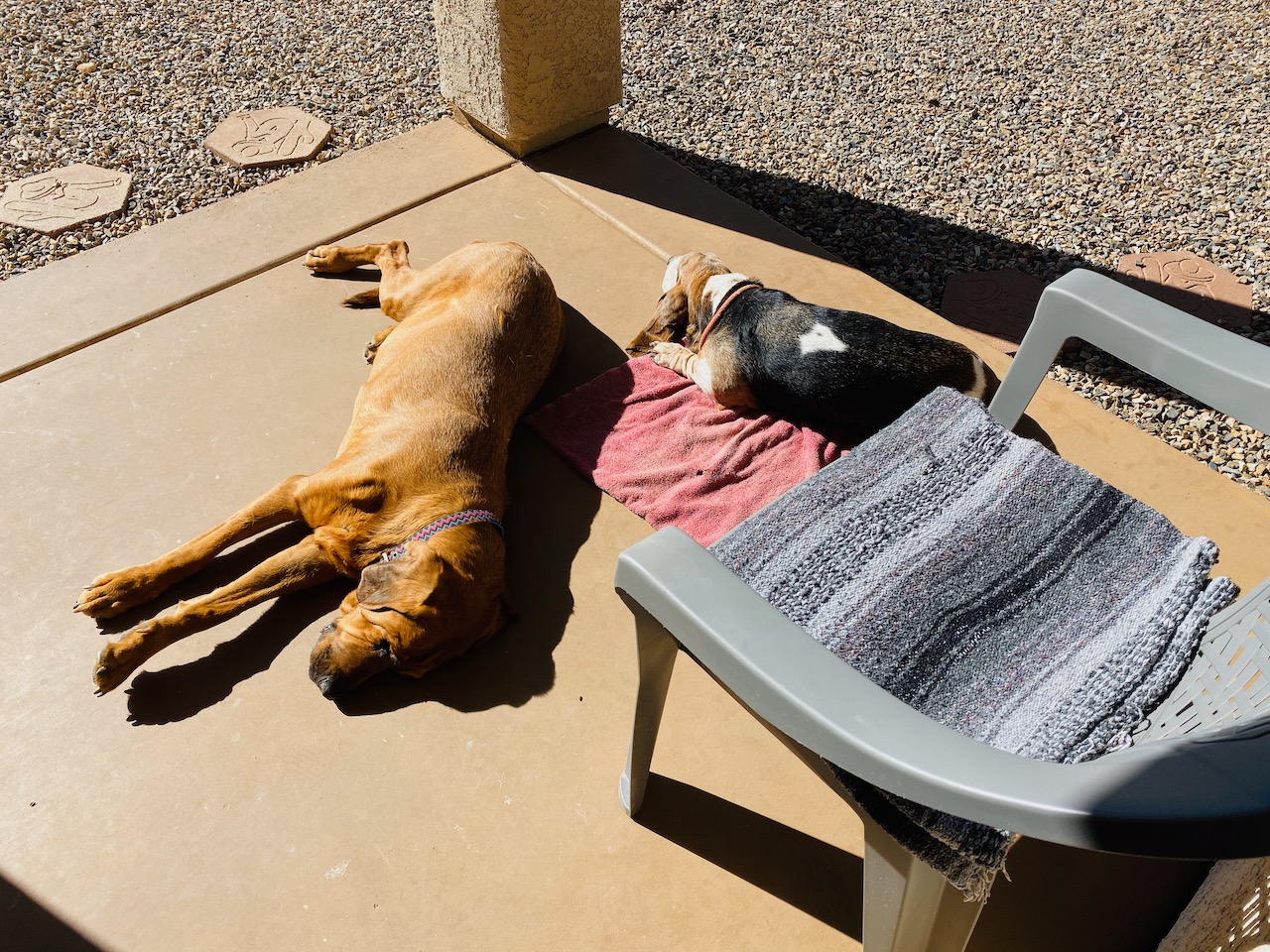 While the hounds soaked up some early morning sunshine I was devising a plan. I wanted to drive the Mini Cooper today and hopefully take the Cinelli handlebar stem that I had swapped out on the LeMond bike down to the bike shop in Bisbee and donate it to his inventory of handlebar stems that he sells.

By the time I moved into the driver's seat of the Mini, I still had not felt one bit of soreness from Saturdays "most activity since the surgery." 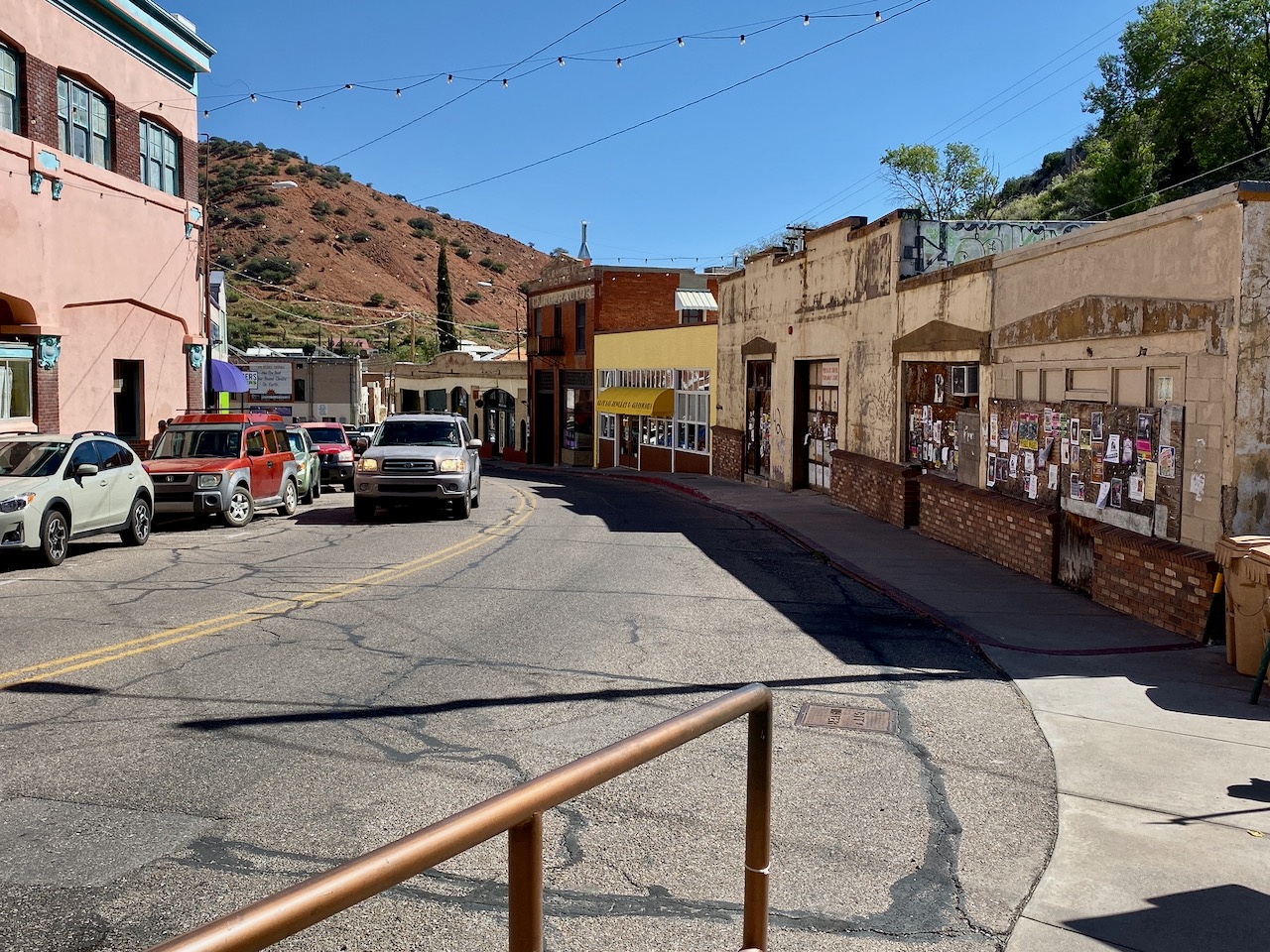 Not even 11:00am on a Sunday and downtown Bisbee is packed with people. I slowly drove past the bike shop that you see on the right side, two buildings past the yellow building. I had a feeling I would be parking up the hill and around a curve near the same place I parked 43 days ago. I was close ... only three parking spaces away from where I parked before. 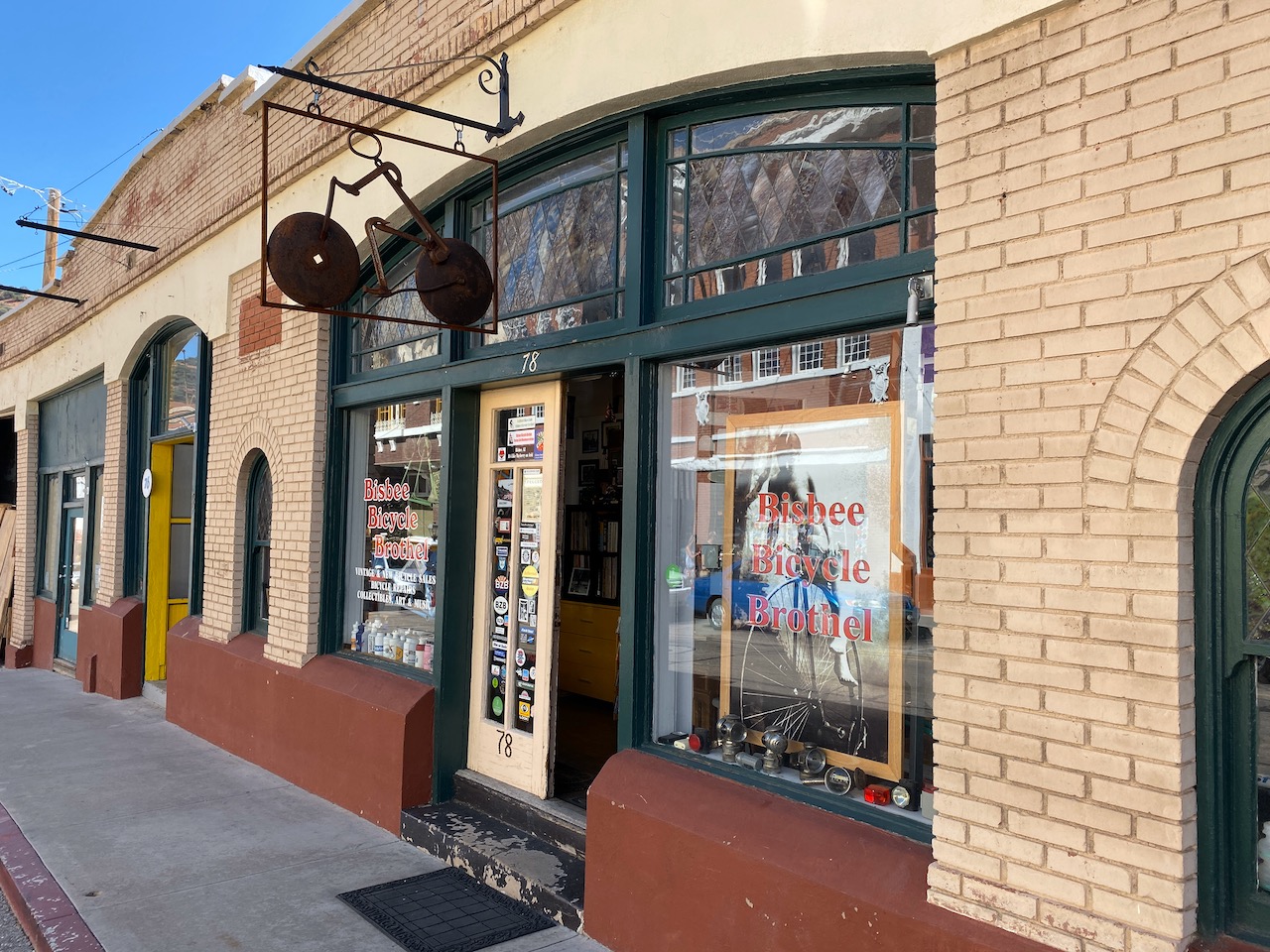 During the time I walked downhill I did not feel any discomfort in the hip. That was a good thing as once again I forgot to bring the cane with me. When I pay for things in this store with a credit card (so I can get a small percentage back in the future), it recognizes Bisbee Bicycle Brothel as "entertainment" not "shopping" like it does when I buy from the local bikeshops. Any ideas why?  HaHa 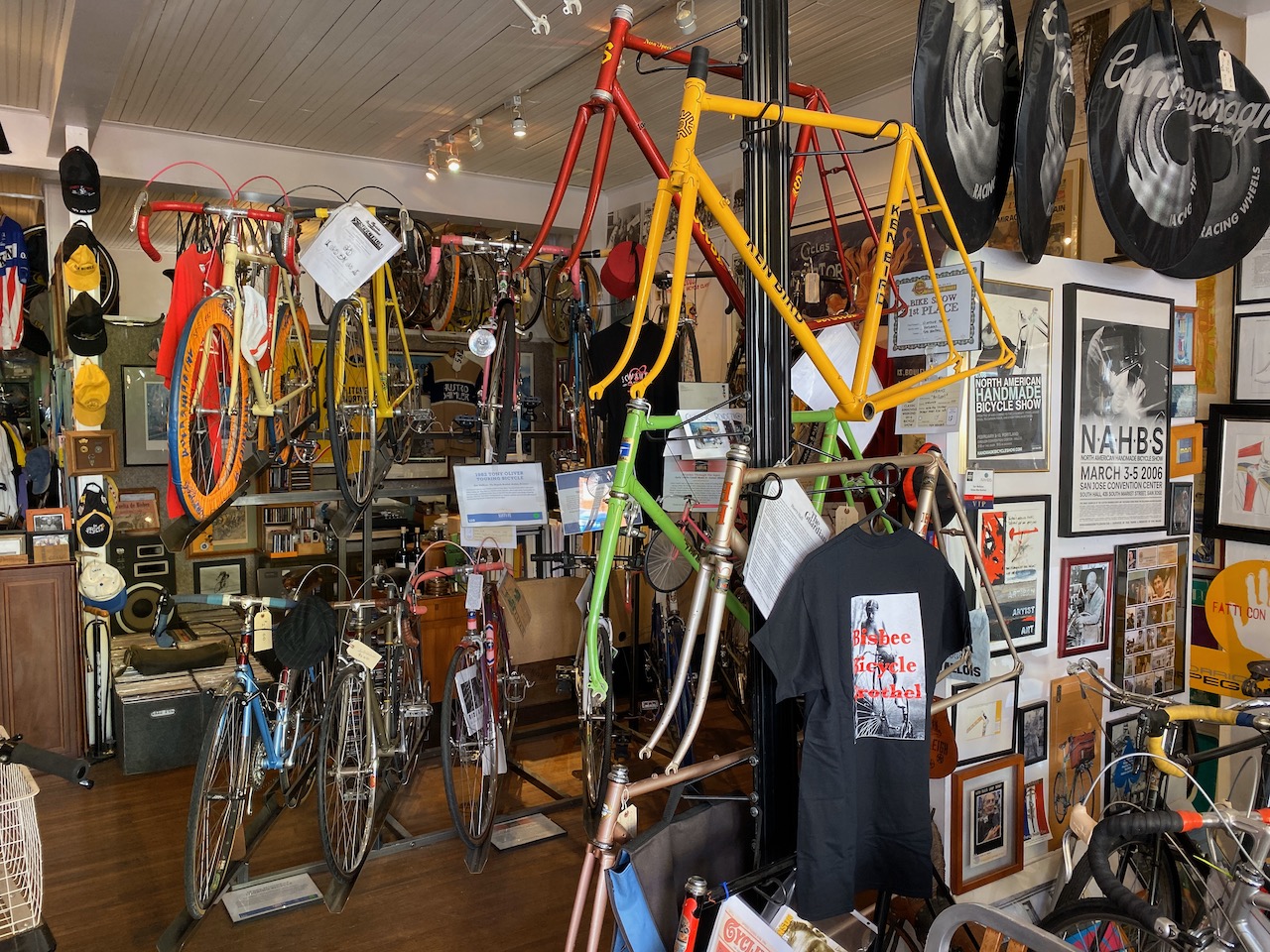 Like I have said before, it's more than just a bike shop but a collection of music for sale and a ton of great photos that have been framed from the small 4x6 to poster size. All of these old bicycles were made in Europe or Britain by famous builders and some have been raced in the Tour de France.

The owner and I had our normal long conversation on all kinds of topics. We only took breaks talking when he had customers come in to take a look. Not one of them was a bike fan or rider and even one lady thought she had walked into an antique shop. I guess in a way it is. Some of the bikes are older than I am.

It was a nice day to take a drive with the windows down, through the Mule Mountains and then brake off and on as we slid downhill into "old town" of Bisbee. I can usually tell right after I turn off Hwy 80 just how busy the town will be.

I stood most of the time or walked around while we talked. I explained to him that I felt better walking or standing rather than trying to sit in a chair that was too low for me nor did it have arms that I could use in helping me get back to my feet.

It was the first time I had taken a long drive in the car since my surgery. Also all of these photos were taken with the new iPhone 11 Pro. With all the pasta I ate after returning home, the carbs always makes me sleepy. It was a perfect time of day to get some rest for the hip and take a siesta.

It was another great day here in the Wild West.
By Steve at 4:23 PM