CVS Is NOT My Friend 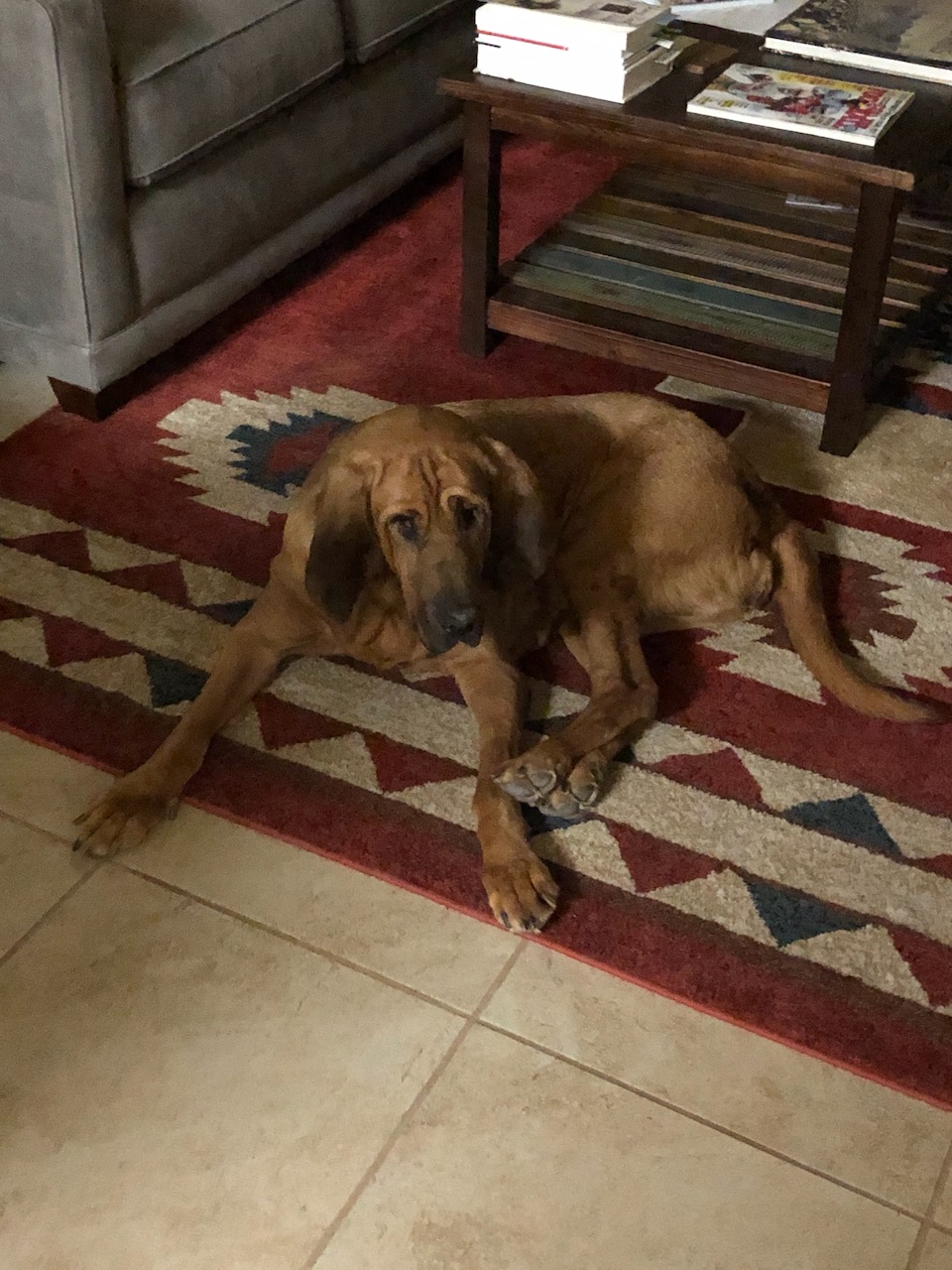 It was only Stella and I that got up to start our day a little after 4:30am today. Heidi never moved nor blinked an eye when I turned on the lights. She also didn't wake me up in the middle of the night to go outside, my bladder did that more than I wanted it to. It's a long funny story in a way ... but the back pain is gone this morning. No more spasms so far. 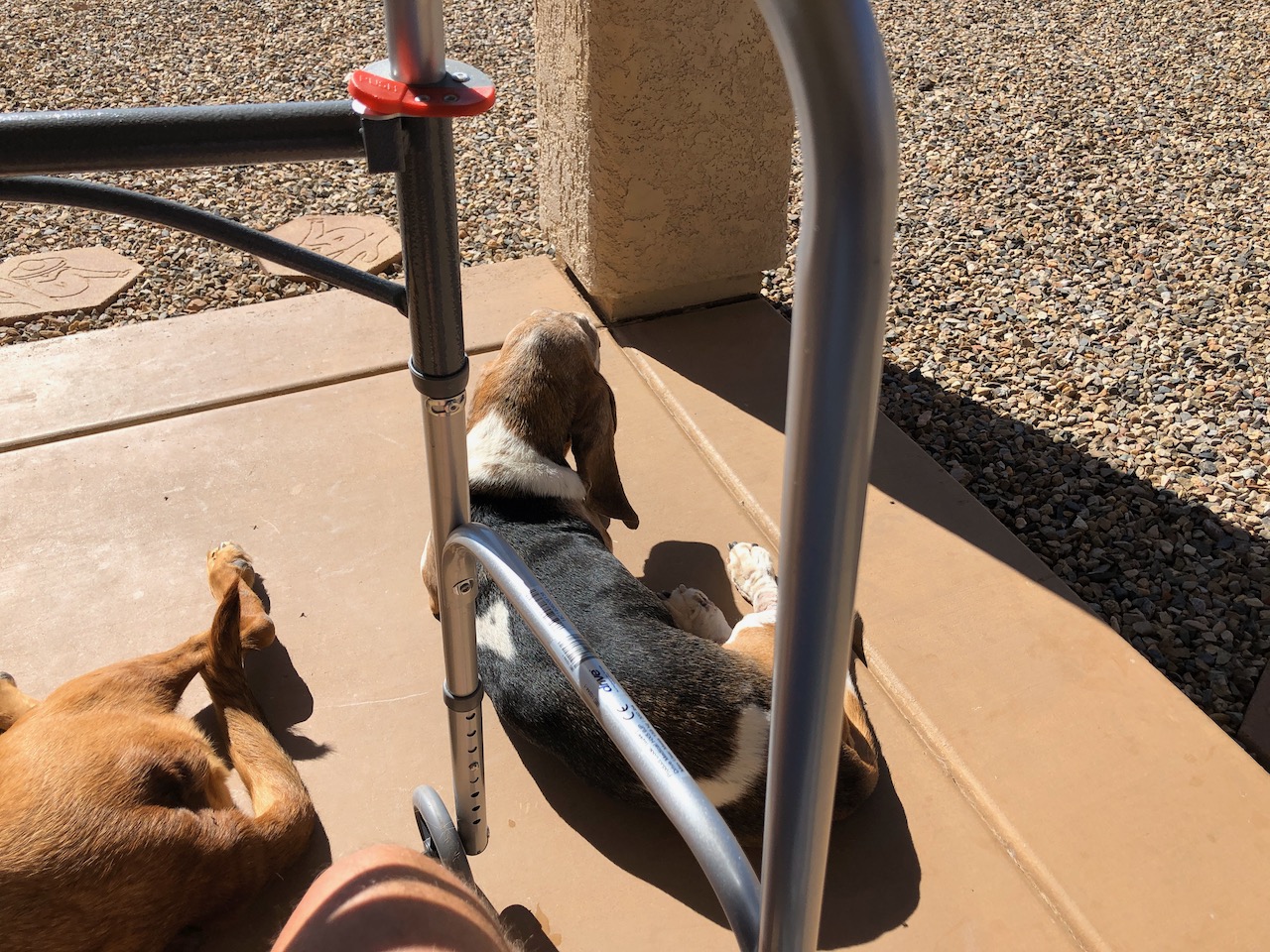 It was a real rest day yesterday where I spent a lot of time flat on my back in bed and it didn't matter if my eyes were open or not. That was the plan and I followed that until mid-afternoon. Otherwise there were a couple of times I had to get outside to feel the warmth of the sunshine and enjoy the view. As you can see the hounds had the same idea and you can see the walker was back in action. 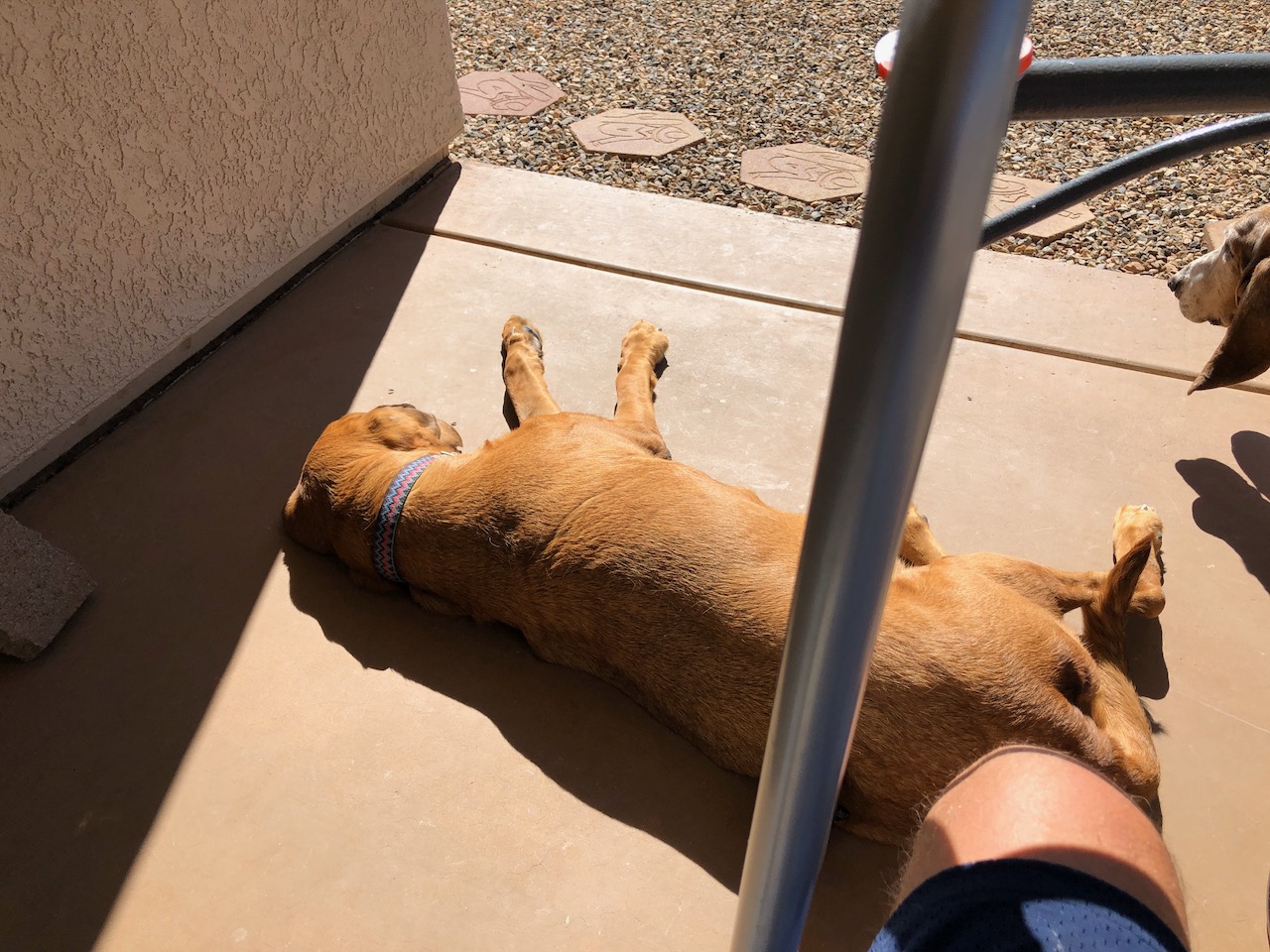 Like I said when I updated yesterday's blog post, the doctor's office called me at 10:10am and told me I could pick up some Cyclobenzaprine by 10:30am. I did a few test walks inside the house with only my cane to see what kind of pain I was feeling in my lower back or hip. Would I be able to walk from the car inside CVS and most likely stand in line to pick up my prescription?

Since I had been applying some a warm towel then rotating it with an ice pack earlier, my lower back was not feeling too bad. But there was a muscle that was connecting to the back of my hip that was sore. It was almost like I could draw a line along that muscle by the way it felt. Sitting in and standing up out of my chair passed the test with only slight pain in the upper thigh ... I felt good enough to drive to the drug store. 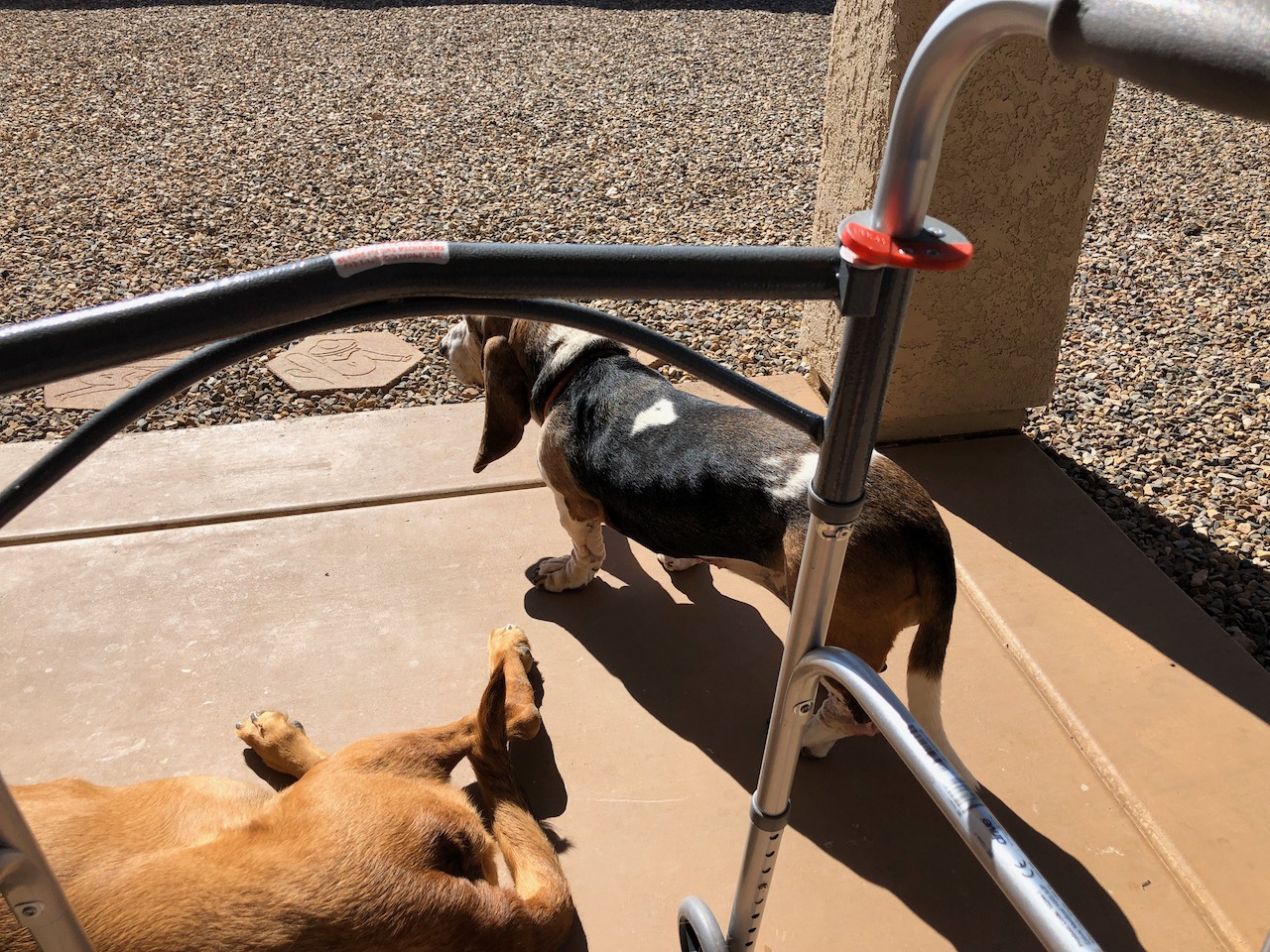 Of course in my life and mostly like the lives of millions across the nation, nothing is ever smooth in picking up a doctor's prescription at CVS or any other drug store for that matter. I was 5th in line and from the looks of things, I was in pretty good health even with a cane by my side.

As the male pharm tech typed in my last name and date of birth .. he looked up at me and told me "I have no record of that being called in" .... mmmm perfect. I could feel my Apple Watch vibrating against my wrist with a sudden increase in heart rate. (joke)

Luckily for me the female pharm tech standing a couple of computers away heard my reply that I had been called by the doctor's office telling me it was ready for pickup. She motioned me over, took my last name and date of birth ... bingo !!!!! I was the lucky winner ... it was in their records after all.

My sister bought this for me as a Christmas Gift I think as far back as the early 1990's. I had not used it for years but if it survived the last downsizing when I moved and made the trip all the way out to Arizona, there must have been a reason for it. I plugged that in early yesterday morning and it did what it could to my tighter than tight lower back, plus it added some heat. I had SHORT term relief.

So as the female pharm tech is looking at me and giving me the great news, she said "It will not be ready until noon" we are backed up. Why did I feel that noon timeframe was just plucked of of the air as a very very rough estimate. I calmly ... calmly ... maybe even with a slight smile ... said ... "okay"

I turned and came home.

Since I did not trust or believe what she was telling me, I cruised the isles of CVS looking for the famous ThermaCare heat pads. Their commercials are all over the baseball and football games. I had used something similar in the past but it has been years since I had lower back issues. I picked up a 2-pack and headed home.

After about 15 minutes I could feel that heat protruding through the clothing I was wearing. (Warning stated anyone over 55 years of age HAD TO wear these outside of clothing and not on bare skin) At the 30 minute mark as I laid in bed I was beginning to think this ThermaCare pad might be better than any muscle relaxer. I took a nap for an hour and could feel the muscles in the lower back were much better than early this morning.

In fact as I sat up in bed with my hands behind me, supporting me ... I felt a small pop in my lower back. That's a good sign.

It was past noon by this time and I had not received any text from CVS telling me the meds were ready for pickup. I logged into my account online to check status ... "In process". What happened to the NOON timeframe she gave me. I went back to bed to lay down and plan my next move.

1:00pm - online "in process"
1:30pm - online "in process"
2:00pm - PHONE CALL with real person in that pharmacy
- "We are a day and a half behind in filling scripts"
- I let her know that I'll call and let my doctor know of the status of his request, but as a bonus I am going to blog about this story with your first name, company name, local address and local phone number. Then I will go to Yelp to add my review of your pharmacy and I'll not stop there. I will then go to the Facebook group called Rants and Raves for my town and RANT about your pharmacy ... Unless you want to become famous on social media, don't even tell me I have to wait a day and a *(&(#&$ half to pick up something that was due at 10:49am !!!!!"

I was back in the car to pick up the meds, I was back home by 2:45pm with pills in hand. Looking at the long label of information stapled to the small bag, at the top in the upper right corner above the bar code "Promised: 10/11/19. 10:49am"

So you are probably asking yourself why would I pick up the script for a muscle relaxer if the heat pad was working???  I needed some muscle relief in my hip, and the muscle going from the side of my lower back to the back of my hip. I figured relaxed muscles have a better chance to heal rather than tight muscles where blood flow is restricted.

I poured a tall glass of ice water and took the first pill of Cyclobenzaprine 5mg. Then I set the timer for 6 hours to let me know to check how I felt and decide whether to take another. The 6 hour limit was per the script plus take as needed.

Just because my back and hip started feeling better did NOT mean I decided to walk laps around the backyard. Nor did it mean that resting was sitting in a chair. I headed back to bed, laying flat on my back and rested. Baseball and football games did not start until 5pm so I could get a good 1.5 hours of good rest. Once again as I leaned up preparing to swing my legs to the left to get out of bed, another small pop in my lower spine ... more muscles releasing back to their normal position.

I wasn't going to ramble this long and I was going to add today's photos to post this tonight but I now have too much written to add a day of commentary ... so I am going to post this now. Today's plan is more rest flat on my back in bed or flat on my couch watching football. I will NOT be sitting in a chair for too long when I do use a chair.

So far this morning in the short 66 steps I have taken inside the house making coffee and letting the hounds outside ... lower back is good, slight pain in upper thigh and not nearly as strong as I was before this happened a couple of days ago. I am having to use the walker instead of the cane.

It will eventually improve, the recent damage will heal but normal activity in 10-12 weeks post op now seems like it's a year away. I'll not push it but in the past I was just doing what my body was telling me was ok, following doctor's orders.

It was always a possibility that I might have this setback. I was told it does happen sometimes so don't be surprised if it does, no matter how good you are feeling.

Football Saturday in the Wild West today .. plenty of time to rest.
By Steve at 6:02 AM