This is a custom made frame, 1984 with full Campy Nuovo Record components. The builder was Ray Gasiorowski in Houston Texas. Ray use to race in the 1950's, worked for Schwinn before branching out into his own frame building business. He talked with me over 4 hours before he decided that he would build a frame for me. It was a very detailed interview and the results from that were a perfectly fit bike. You could ride for miles and feel no stiffness in your shoulders, arms or lower back. The only things I have changed from his original build, was the seat and the Look Pedals.

I bought this road bike in April 2013 for a wider range of gears that I didn't have on my 30 year old Romic. This bike could keep me in the saddle getting up the steep hills of southern Indiana. I found it to be a much lighter frame than my Romic, that is Reynolds 531 steel. It rides really nice and smooth but the 1984 Romic is still my favorite bike to ride. 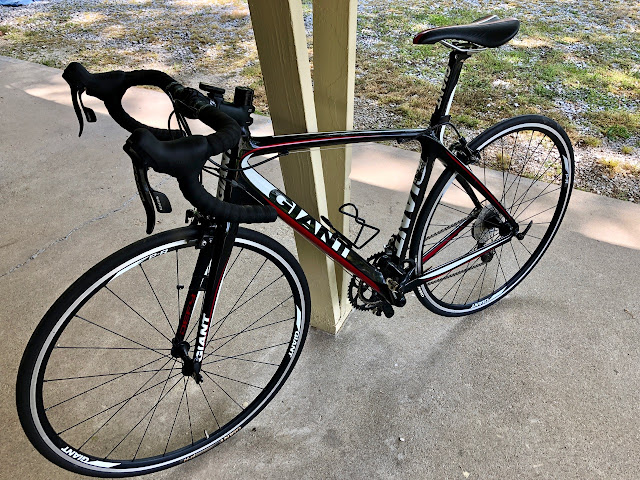 This was my first mountain bike that I purchased in June 2104. I only wanted a bicycle to ride without having to change into cycling clothing, shoes etc. I wanted to be able to get on it with shorts, a t-shirt, my ballcap and shoes then just go cruising. It will work out well with the gravel roads and the roughed up paved roads around my local area. I gave it away when I moved in June 2019.

After I moved in June 2019 I planned on buying a new mountain bike because of all the great places to ride. I'm a "roadie" but this place is mountain bike crazy. I went to Sun and Spokes Bike Shop and told him what I was wanting. Mark told me about each bike with instructions to stop him once he had more bike than I needed. I settled on the Giant Talon 2 and love riding it.

I was told when I arrived in Sierra Vista that most of the paved roads were rough surfaces and I would find my riding more enjoyable on a mountain bike or what they call a gravel bike. With two road bikes at the time, I was going to stick to them for the majority of my riding. That would change with my hip replacement in September 2019. By luck I found a used 2018 mint condition Specialized Diverge Comp. I bought this the same place I bought my Giant Talon 2.

Frame design made for comfort and distance. Two shock absorbers for riding comfort are located under the seat and under the handlebars. Tires are 700-38, bigger than a road bike smaller than mountain bike tires. Really comfortable to ride.

A few days before my bike wreck and hip replacement surgery I was in M&M Cycles to buy a pair of bike shorts when I saw the LeMond bike leaning up again the counter by the cash register. It was a 57cm and only 1cm taller than the custom Romic I had. After a test drive in their parking lot I had to buy it, used and only $500. I brought home and rode it 20 some miles that afternoon and again the following morning. Just like LeMond, the frame design was built to climb sitting down. It's a Zurich model built in 1994.